In the comfort of carbs
Life
Social & Lifestyle

In the comfort of carbs 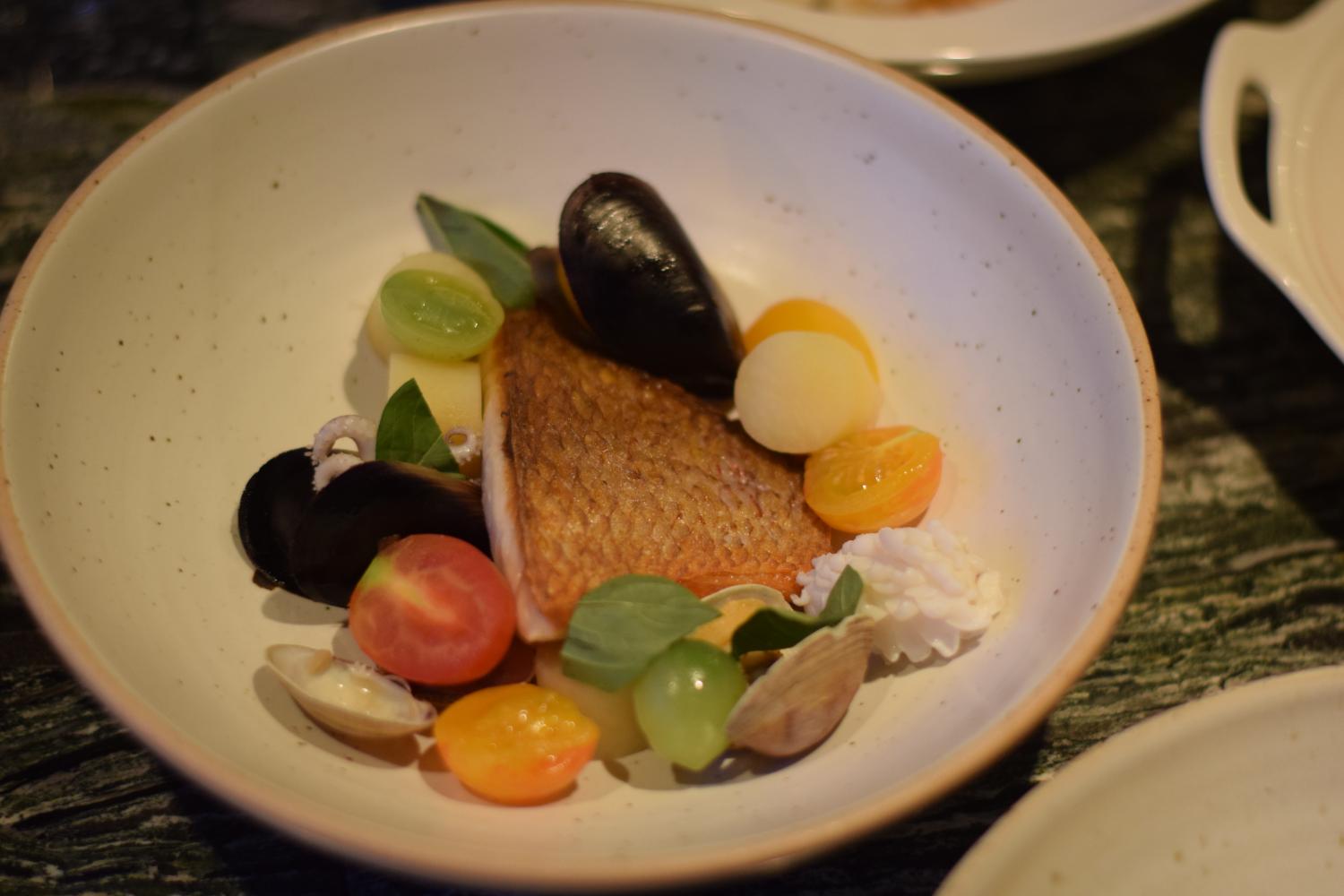 Not new on Bangkok's dining scene, Bunker on Sathon 12 remains unchanged since it first opened -- in exteriors and interiors alone.

A reference to a fortified shelter, Bunker's concrete facade greets guests with a ground-floor cocktail bar; the main dining room on the floor above with a view of the open kitchen. Should an open kitchen not float your boat, there is always the topmost floor, complete with a small terrace that gives an excellent view of the proceedings at the 7-Eleven across the street.

Though it may appear cold and dark from the outside, the interiors are a different story. Warmth is brought to you via the comfort of the Asian-American cuisine and the hospitality of the staff.

What is spanking new is the menu and chef -- Lorin Janita, who comes to Bangkok from Phangnga's Esenzi. 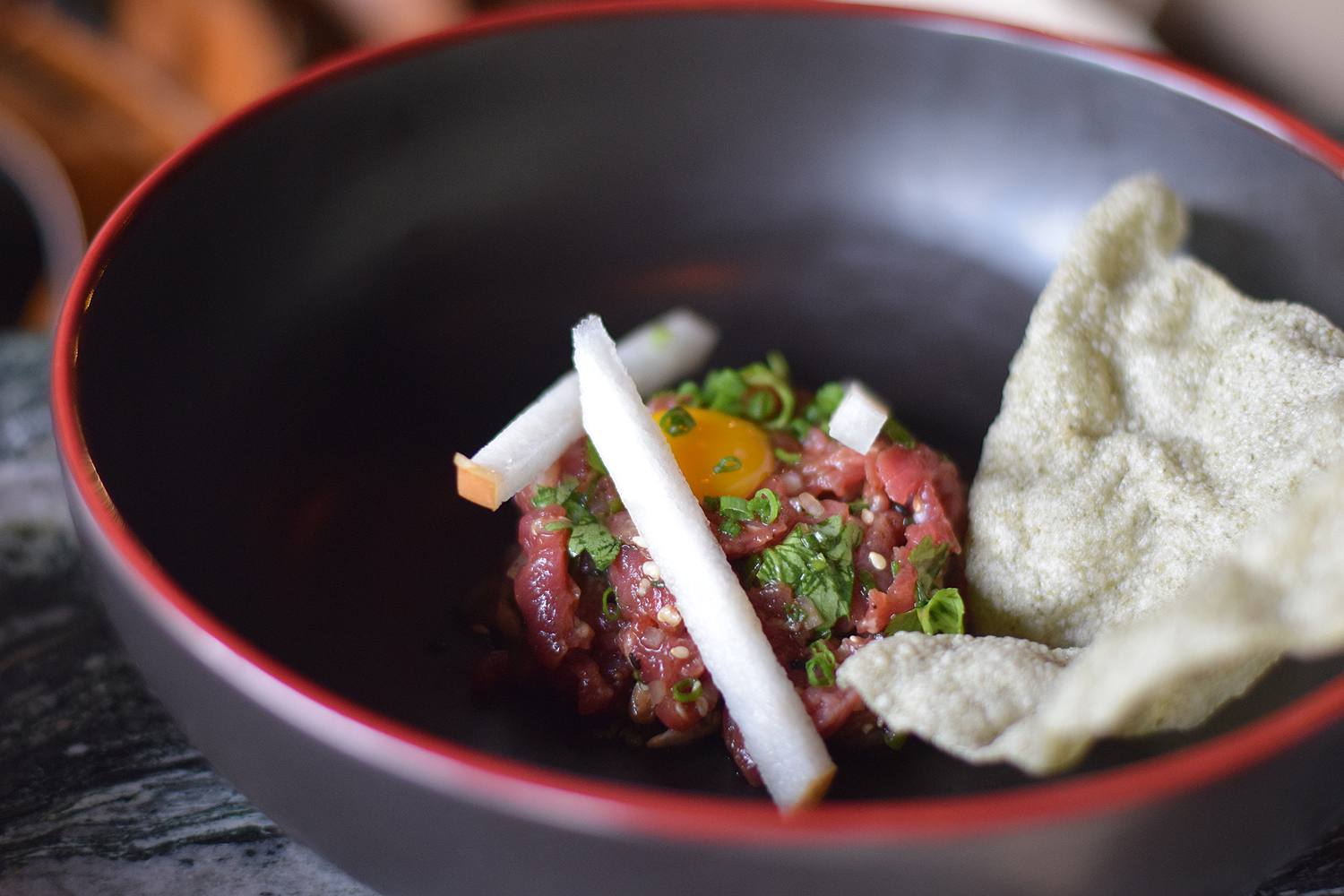 If I had to describe the menu in one word, it would be decadent. Though it has a very distinct executive chef Tim Butler touch, chef Janita has added his own memories to it. "The produce that we get, especially the fish, which we get from Tsukiji in Tokyo, is so fresh. Tim and I wanted to use high quality produce with our own interpretations and twisted ideas on certain dishes."

The American dishes on the menu are heavily influenced by Asian cuisine and techniques, with many of them offered as sharing plates. I started off with the Shima aji tartare (B400), which is dressed in a clam-lime vinaigrette and seaweed chips. Served ceviche style, the gingery entrée is a good start on a hot summer's day. I will shamelessly admit to loving foie gras and often find it hard not to order when I see it on the menu. Seared foie gras (B650) comes on a brioche with a caramelised pineapple and was delicious. Another must-order for me is the Bone marrow (B525), a staple of chef Butler. Here it comes filled with melted Gruyere, French onion and croutons that have been dipped in French onion soup, and is served with toast. Not that I needed it. Heehee.

At Bunker, the beef tartare (450) takes on an Asian twist and is dressed with quail egg yolk, soy sauce, sesame oil and Korean pear. Served with nori crackers, it is punchy. 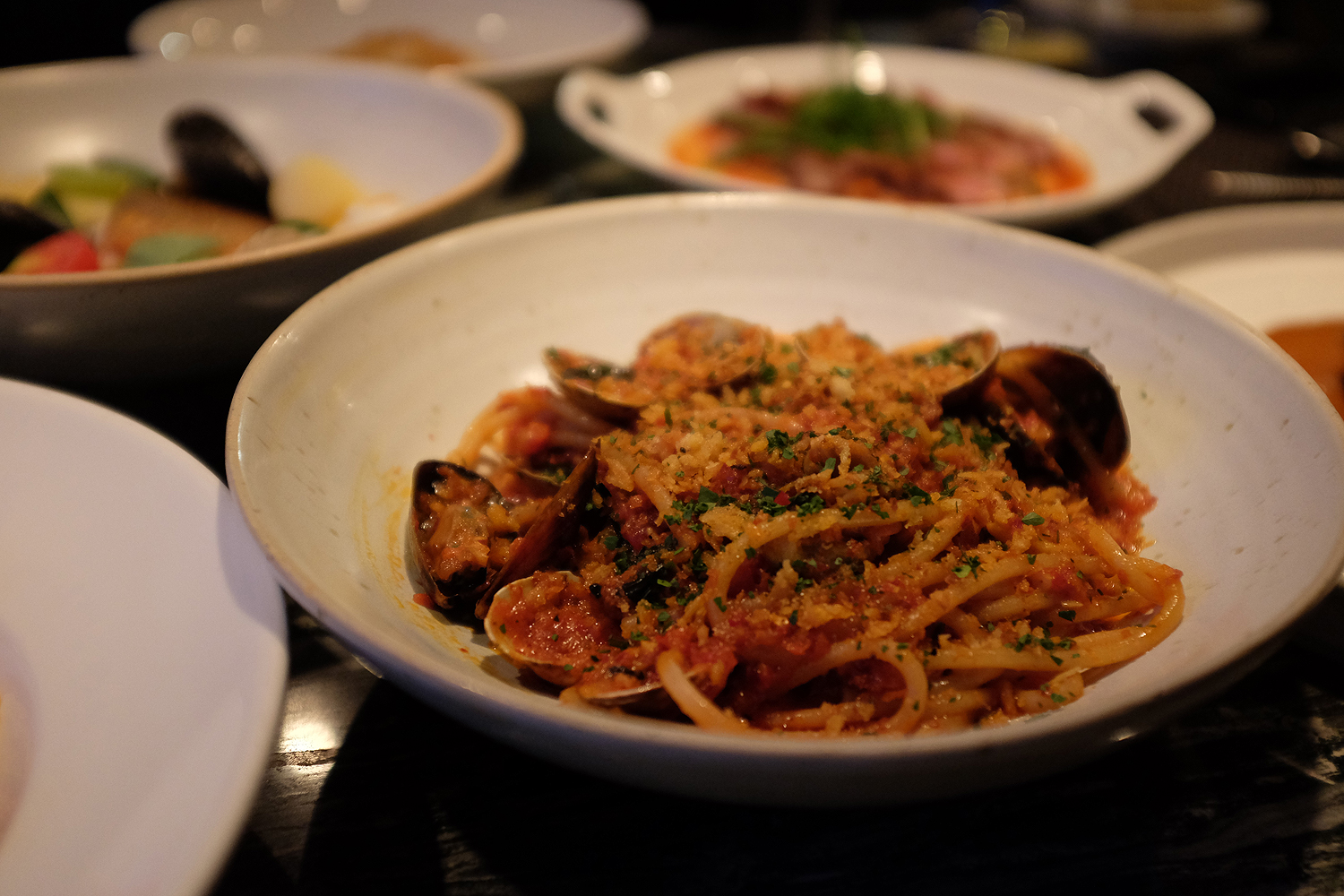 Bucatini with N'duja sausage and mussels.

"We want Bunker to be a group or a sharing plates restaurant," says chef Janita and the mains are large enough portions to share between two. Order a few of them to share for groups, though there is a separate sharing plates section on the menu, but I shall get to that later.

If you're a sucker for pasta, the Bucatini (B700) with N'duja sausage and mussels is a treat. I like a good wet pasta and this did not disappoint. American comfort food classic mac and cheese comes in the form of a Mac and cheese cavatelli (B800), filled with oxtail goodness at the bottom and housemade breadcrumbs atop. My fav of the mains was the Chicken and crispy jambalaya rice (B500), with Spanish sausage. "We wanted to do a chicken dish and everyone loves chicken and rice. One of my favourite ways to eat rice is the jambalaya pot and my favourite texture is the crispy layer on the bottom," says chef Janita. The short-grained Japanese rice is fried on the plancha, red pepper forms the sauce for it, while fresh shaved celery and garlic chips are added for crunch. At the table, the dish is served with chilli vinegar, the addition of which reminded me of Chinese fried rice. I was craving the rice the next day, which says a lot about the dish.

The other favourite is the Pork pluma (B700), which comes with kimchi and creamy polenta. "We were changing our pork dish and I wanted to do something hearty. When I learnt we were sourcing Iberico pluma, the kimchi that I was fermenting was also ready. Pork and kimchi is a classic combo and I decided to use polenta. I wanted a porridge dish to go with the pork, and with the kimchi the pork would integrate better," says Philippines-born chef. XO sauce completes the dish.

Though keeping in mind that diners will not always be in large groups wanting to eat heavy food, there is also light, easy and flavourful dishes in the form of fish. The Seared madai (B700) is served with confit potato and heirloom tomatoes in a seafood tomato broth. The Grilled hamachi collar (B750) is served with celery and tabasco with New England clam chowder. Both dishes pay homage to the east and west coast of the US. The New England clam chowder comes from where chef Butler grew up, the dish being a part of his childhood. On the opposite side you have the madai, inspired by cioppino from the Bay Area, where chef Janita was living before moving to Thailand. The tomato-based seafood soup is inspired by a fisherman's broth. Both dishes are a shout out to the chefs' American upbringing.

Being the uni slut that I am, I had to order the sharing platter of Bafun sea urchin (B1,900/100g tray), which is to be shared between a couple of people. I could eat the entire tray by myself, but to avoid a heart attack I offered to share. The "uni"que (pun intended!) dish is Japanese-Mexican at its best. Served deconstructed and do-it-yourself style, it comes with nachos and all the fun stuff you get with nachos -- pico de gallo, fresh green chillies, coriander, lime wedges, salt and crème fraîche, which normally goes with caviar. If this isn't sex on tortilla chips, I don't know what is! 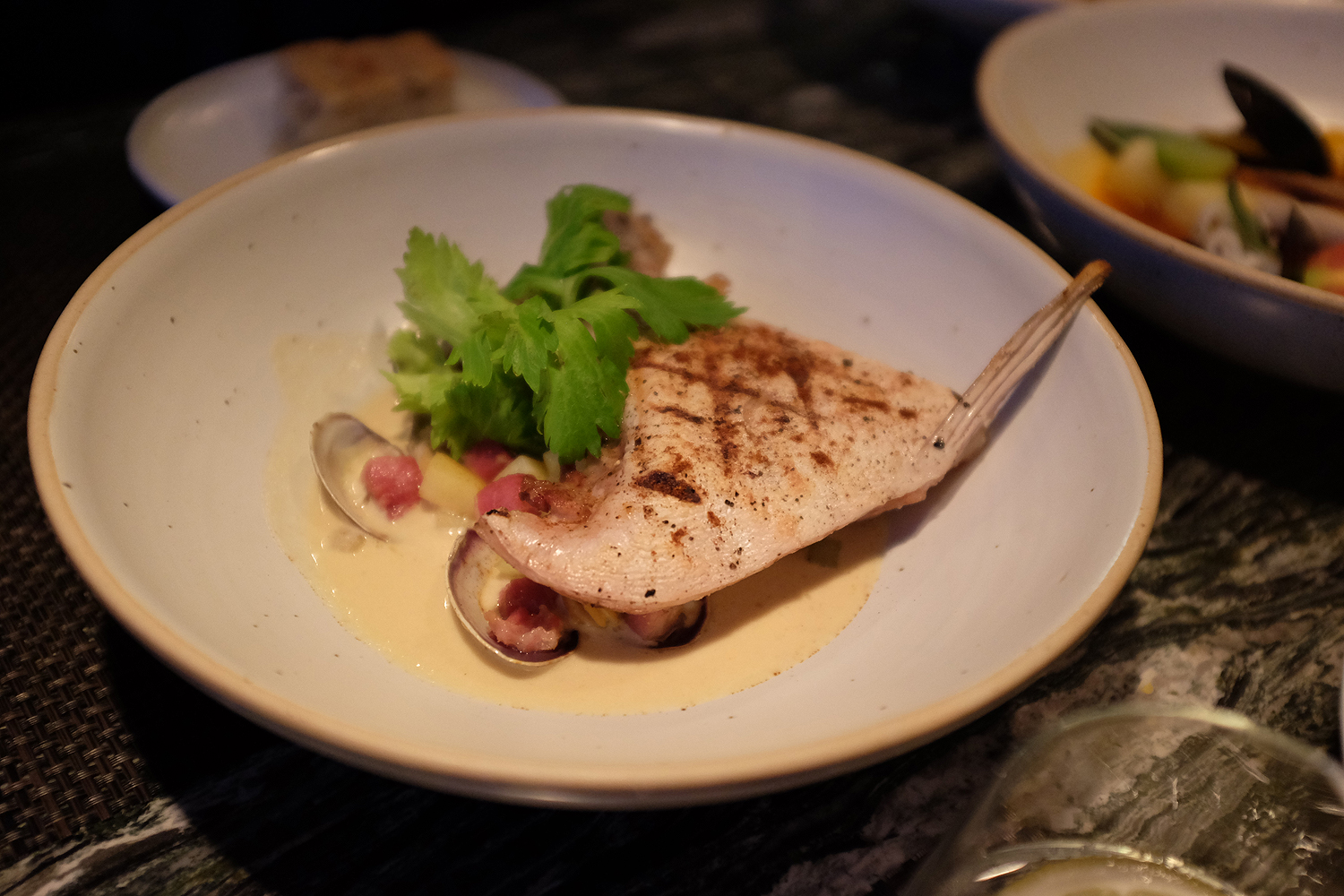 Do not let the Crispy fried pig's head (B500 half/ B900 whole) scare you. The dish comes with a medley of dipping sauces and pickles. If you're not one for the deliciousness upstairs, the first floor bar also serves up goodness in snacks form. There are three baos to choose from (B220) and treats like Stewed Manila clams & mussels (B420) or Iberico ham croquettes (B200).

Punchy hearty flavour profiles is how I would sum up dining at Bunker. Comfort food done right and yes, you're gonna wanna go in big -- in a group, that is.