The hills are alive

Lisbon's hills are no joke. The city is built on seven of them, and a vigorous uphill stroll often sees you rounding a corner only to be faced with another, steeper climb. Your walk from one neighbourhood to the next can be a 20-minute hike. Your boutique room could be on the top floor of a charming, lift-free guest house. If you're not fit, forget it.

But the tourists don't mind. Lisbon is a gorgeous city, safe and comparatively cheap, and is justly famous for its food and nightlife. The weather is a big draw, seeing the most hours of sunshine per year of any European capital. In fact, Lisbon hit a record 12.8 million foreign visitors in 2018, and if you go you'll be queuing behind a great number of them. 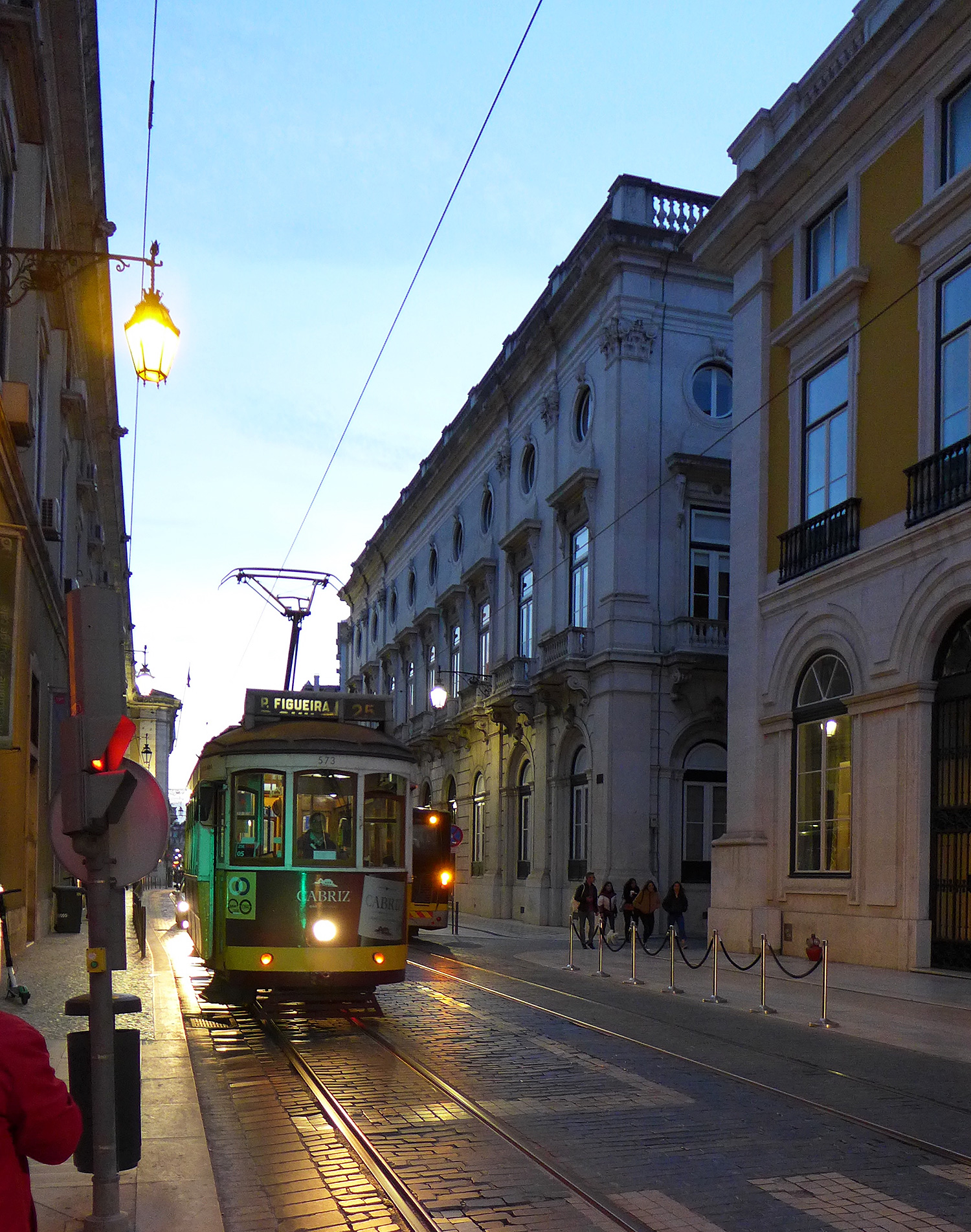 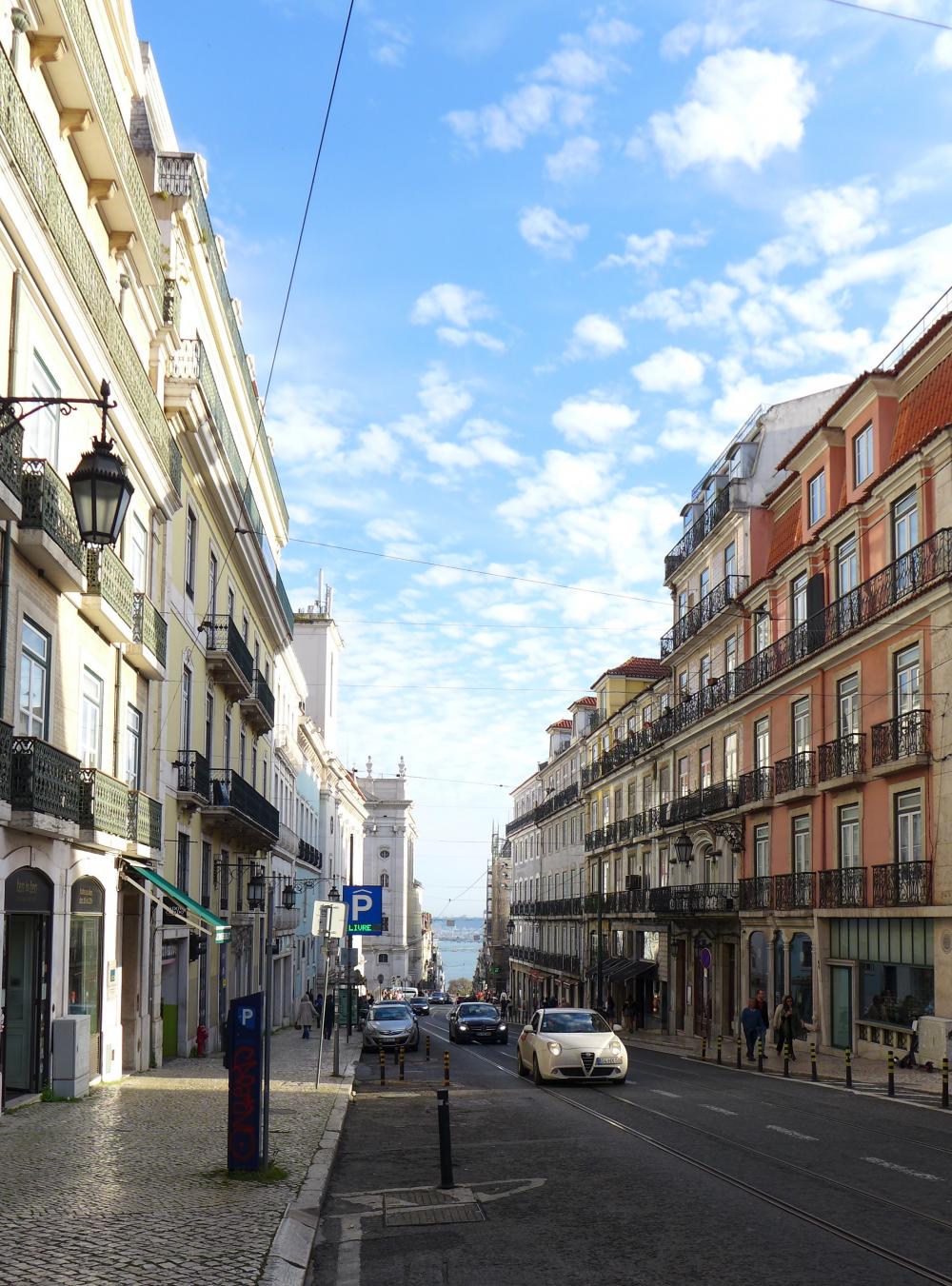 Looking down to the river from Bairro Alto. 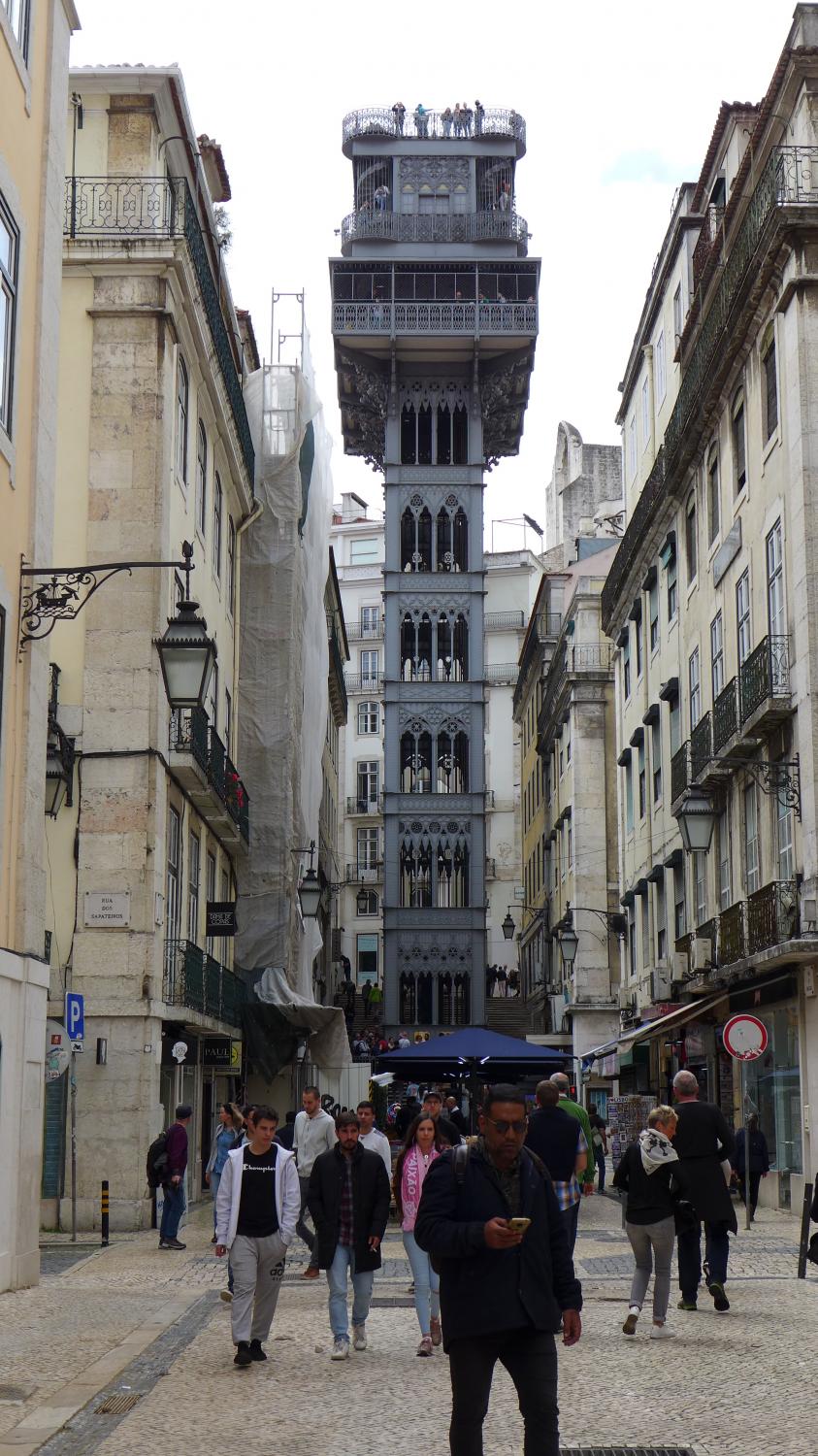 The viewing platform of the Santa Justa Lift offers panoramic views of the city. 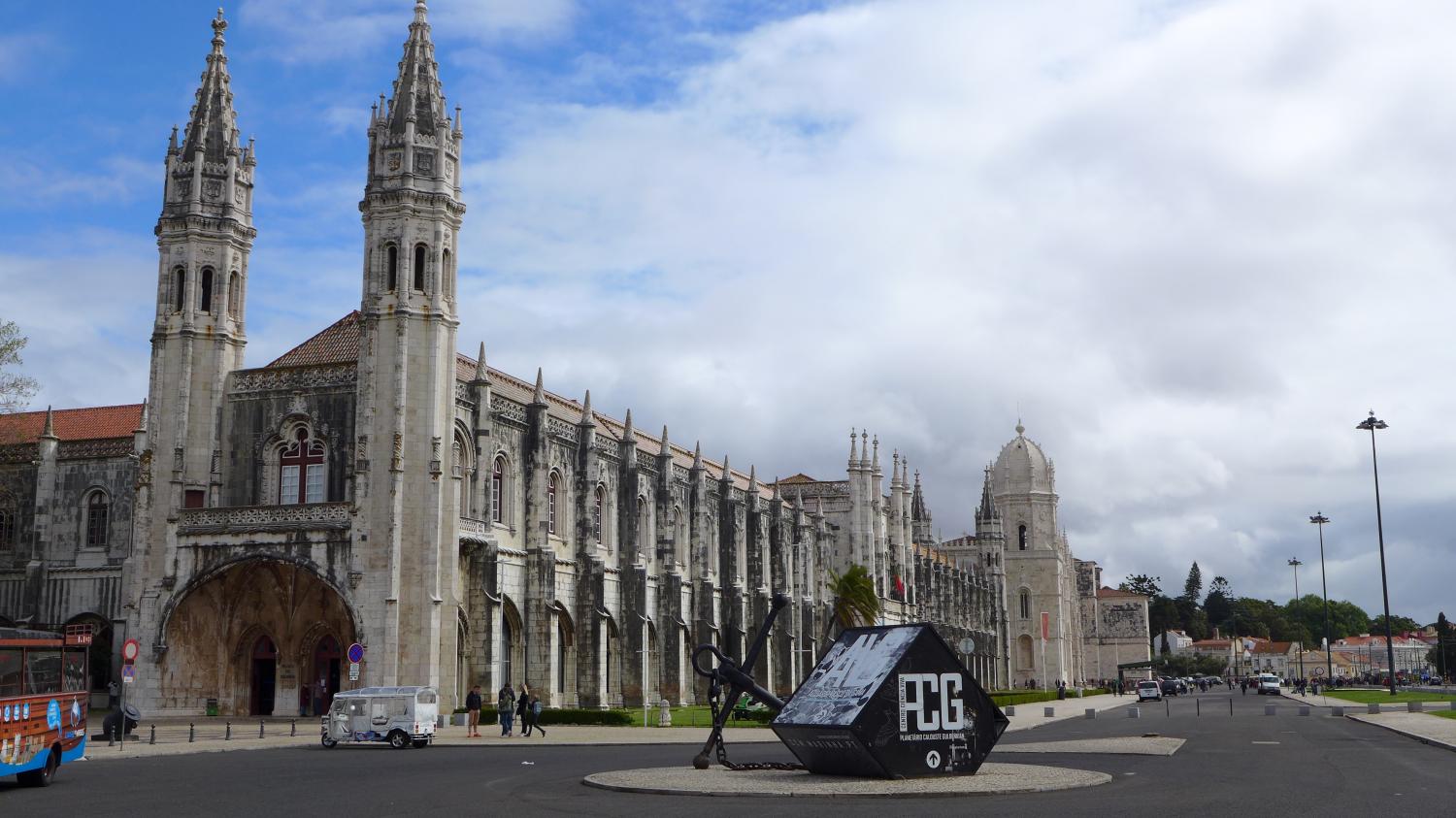 Lisbon's turbulent history is written across the architecture of the city. From a Roman to a Moorish city, then as the centre of a colonial empire, with stints as a dictatorship until a subsequent coup, Lisbon has absorbed multiple cultures which are still visible across the seven hills. Each area has a distinct flavour and varying degrees of ramshackle charm, such as the posh Chaido, the hip Bairro Alto and the multicultural Mouraria. The city flattens as it approaches the river, with Baixa as the downtown centre. Many of its cobbled streets lead to an impressive restaurant-lined square on the Tagus River's edge, Praça do Comércio. Avenue de Liberdade cleaves between the hills, and is littered with the same luxury brands as Siam Paragon et al, so you can skip it. The loftier neighbourhoods are far more interesting, although navigating the city isn't easy for a tourist, with steep gradients discouraging exploration, especially for older travellers. But luckily you're never far from an iconic Lisbon tram.

Until you fathom the tram system (€3, around 100 baht, per trip), a good way to get your bearings is to take a panoramic tour early in your stay. One option, and a thread that connects Lisbon to Bangkok, is to take a tuk-tuk. A tuk-tuk tour is part history lesson, part tourist joyride. The drivers, often local undergrads, not only provide insightful commentary but are a mine of information on the best spots in town, whether for cheap eats or hidden gems.

A morning tour will finish at lunchtime, so just ask the driver for a restaurant recommendation and they'll drop you at the door. Main dishes are typically around €13 at a regular restaurant, and double that if you go upscale. Bifanas are a cheap choice for a quick snack and the miradouros -- viewpoints -- often have kiosks or food stalls offering cheaper eats. Our driver recommended a café in the local neighbourhood of Graça where basic Portuguese comfort food was half the price of that at a typical tourist spot. The wine was cheap, so we ordered two glasses. The price, we soon discovered, was for two half-carafes.

LX Factory is well worth visiting to eat, drink or shop.

The city sits on the bank of the Tagus, whose waters mix with the Atlantic Ocean that laps against Portugal's long western coast. With so much ocean to fish, menus are a pescatarian's dream. Bacalhau -- salted and dried cod -- is a heritage staple, a carry-over from its days as the plat du jour of intrepid Portuguese explorers such as Vasco da Gama. Variations abound, such as bacalhau à brás, in which shredded cod is mixed with potatoes, eggs and olives. Canned sardines are ubiquitous, and the cans feature delightfully designed retro artwork. Carnivores get the bifana, a hefty sandwich of marinated pork. And for dessert, it has to be pastel de nata, Portugal's egg-tart pastry.

For first-day grazing, Time Out Market is a huge food court that covers all the local must-eat dishes. It's hugely popular, meaning its one drawback is -- especially for bigger groups -- the difficulty of finding space on the long bench tables. While you head off to forage, your dining companions will be left to defend your spot from constant "Is this seat taken?" enquiries.

Lisboetas take their nightlife seriously, as do visitors, and weekends are noisy and stag-party boisterous. In the shadowy alleys you may even encounter a polite drug dealer or two ("Excuse me sir, cocaine?"). Your favourite bar is around here, the one with great drinks, cool music and beautiful Lisboetas, but you'll need to try a few to find it. Luckily, they're everywhere. In the more touristy areas you may come across a Fado performance, with melancholy songs of love to accompany your evening drinks.

Sunday afternoons are best spent copying the locals. Choose your favourite hilltop miradouro or stay low on the banks of the Tagus, raid the nearby food kiosks, then relax, letting the afternoon lazily pass by. Slightly out of the city is Belém Castle, a few kilometres southwest along the bank of the river. A Unesco World Heritage site, the 16th-century fortress guards the coast, possibly from armies of tourists tempted by the famous pastéis de nata in the nearby streets. The interior of the castle is impressive, unless you go on a Monday, when it's mysterious. Many museums and attractions close on this day, so plan your excursions with the precision of an invading Moorish fleet.

The always-busy Time Out Market.

The prawn açorda at Pateo restaurant is a famous Portuguese dish.

From there, wander past the huge Jerónimos Monastery and build your appetite for some pastéis de nata at Fábrica de Pasteis de Belém, said to be the best makers of the delicious tarts. To get back to the city, Google Maps will tell you which bus or tram to take. If that's too Vasco da Gama for you, just grab a cab -- although not every driver speaks English.

Heading back from Belém, it's worth stopping at LX Factory. The huge 19th-century fabric-production plant in the Alcântara district has been artfully transformed into a hip eat/drink/shop destination. The carefully curated range of shops ensures that, while it is possible to load up on the usual souvenirs -- retro-style sardine cans, plenty of cherry liqueur and piles of Lisbon tiles -- there are enough independent boutiques to keep it interesting. A few restaurants fill the northern end of the industrial space, while a couple of shipping containers serve as bars under the towering Ponte 25 de Abril bridge. 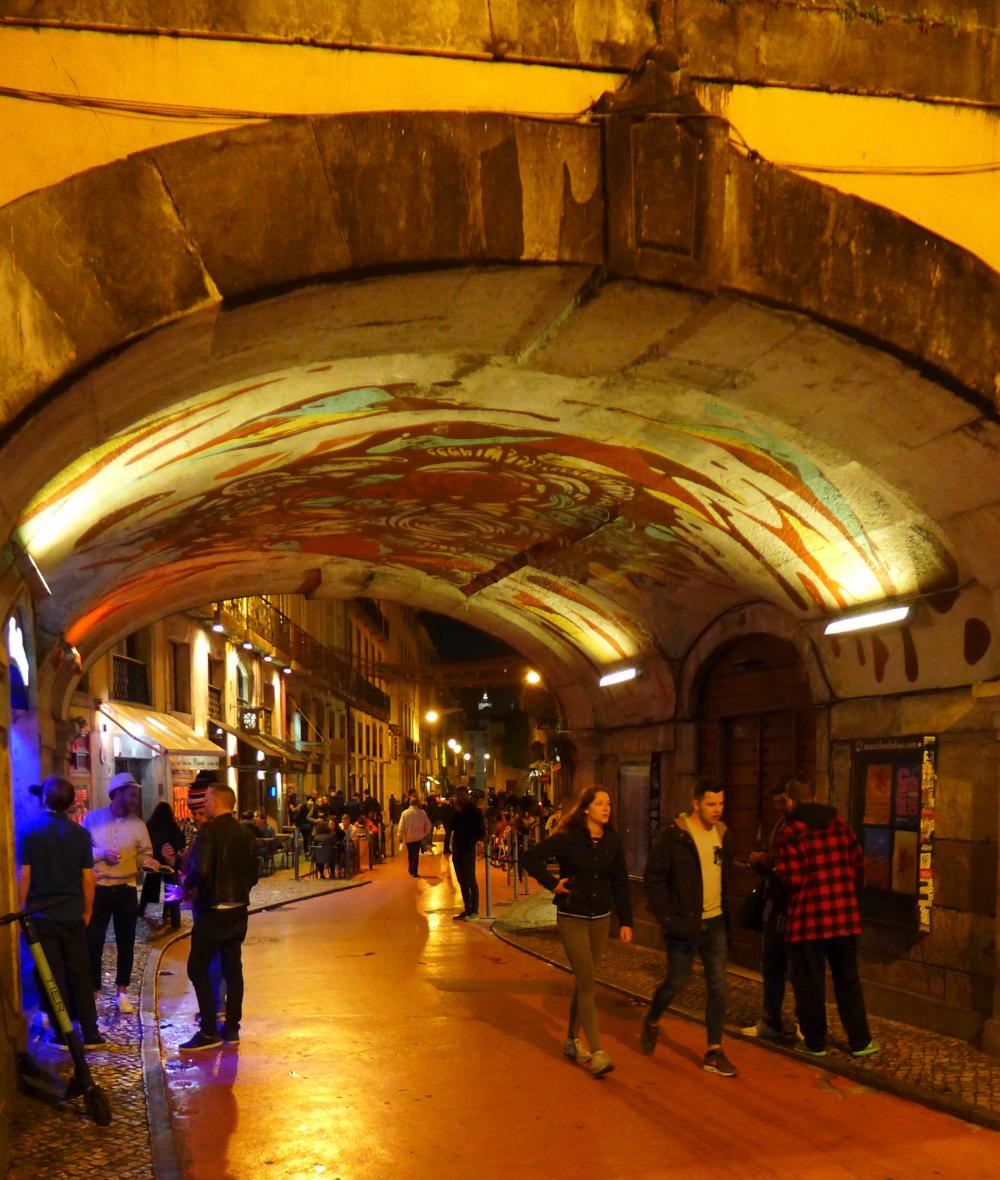 Further afield, a trip to Sintra will test your patience, as you weigh your need for a pretty picture against your tolerance for mass tourism. Your day starts by joining a queue for train tickets that snakes out of the station's ticket hall onto the main concourse. The more eagle-eyed tourist may spot a sign in the concourse newsagent's window offering tickets for sale, and for a small premium you can grab a ticket here and be first on the train.

However, being first on the train means you'll be squashed against the far doors as a seemingly infinite number of sightseers cram into your carriage. The train takes 40 minutes to Sintra station, where you join another queue for the buses that climb to the hilltop palaces and castles. Or, if your nerves are too frazzled for you to remain on the tourism conveyor belt, just grab lunch in the charming streets around the station and head back to the city on the now spacious and peaceful train.

In fact, the city is struggling with its popularity. The narrow pavements of Bairro Alto teem with tourists, stepping in front of trams for that perfect selfie. Rossio train station is borderline impossible in the mornings. Tram 28 -- the city's most famous -- can see queues stretching to over an hour's wait, and some of the people lining up with you are excellent pickpockets.

Lisbon is still well worth a visit, for the Sun, for the food, for the architecture, and for the friendly and beautiful locals. Go soon, before it gets even more popular. 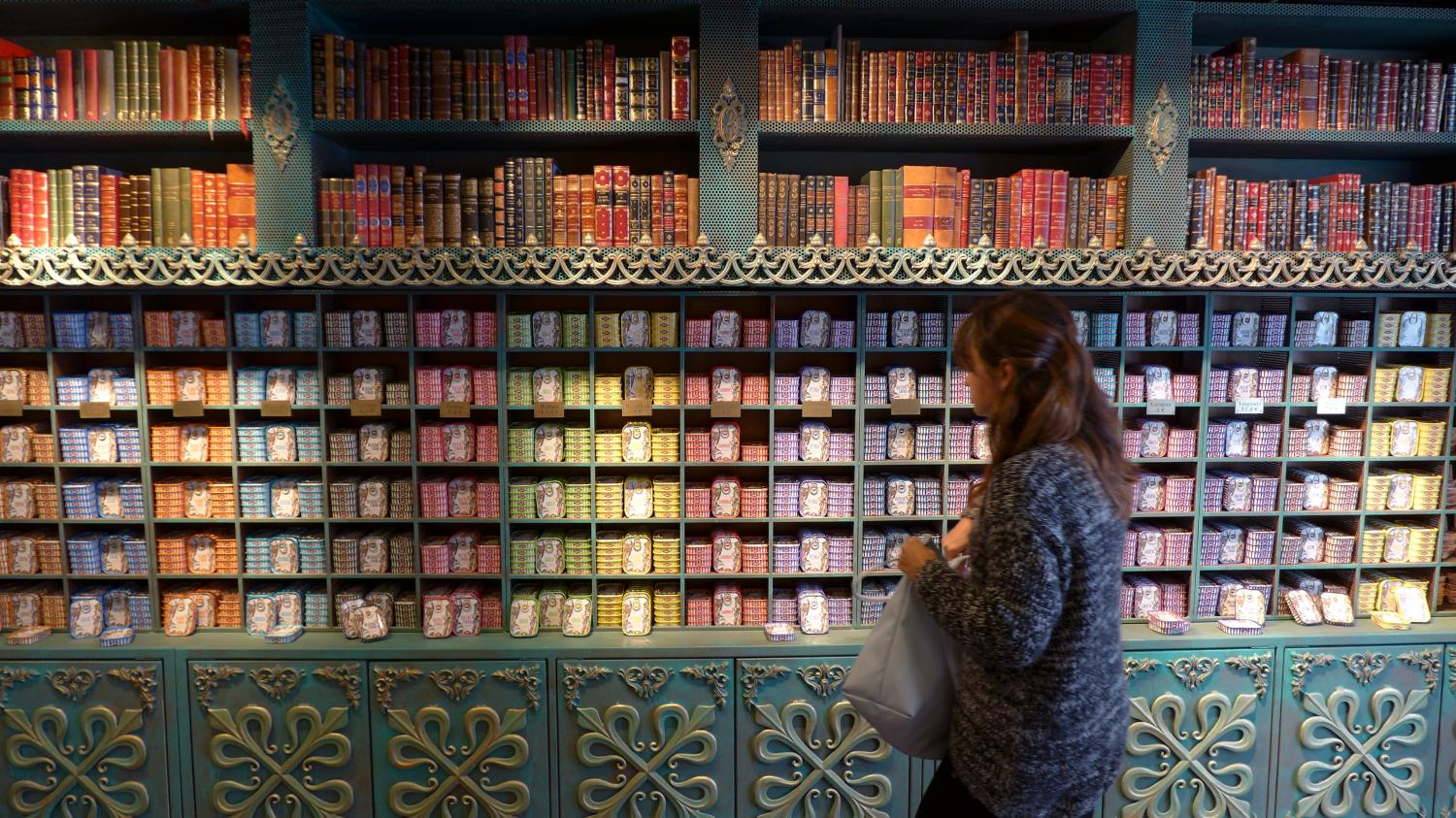 This LX Factory shop sells only one thing: canned sardines.

There are no direct flights to Lisbon from Bangkok, though connecting flights are available from most European cities. For example, Paris is two-and-a-half hours by air, with a return costing around 9,000 baht on TAP Air Portugal. Visit flytap.com.

Lisbon boasts a Mediterranean climate with hot summers and short, mild winters. Summers are crowded and hotel rates peak, making May and September the best times to visit.

A pastel de nata from Fábrica de Pasteis de Belém, said to be the best in Lisbon. 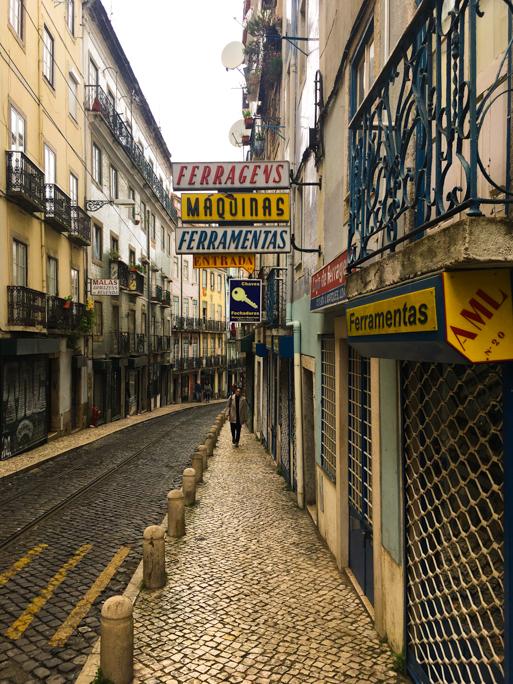 A typical street in the Socorro district. 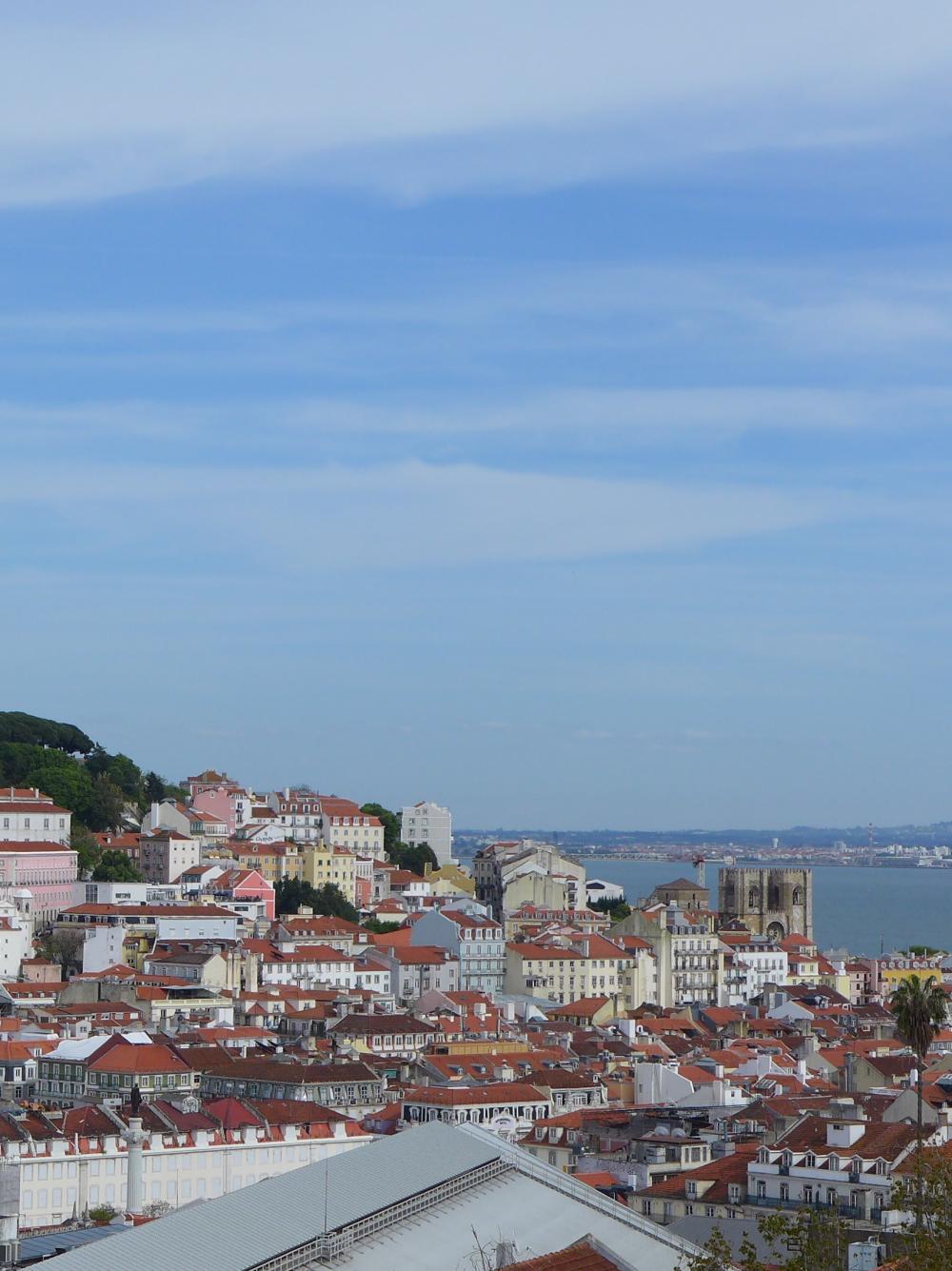 A view across the city. 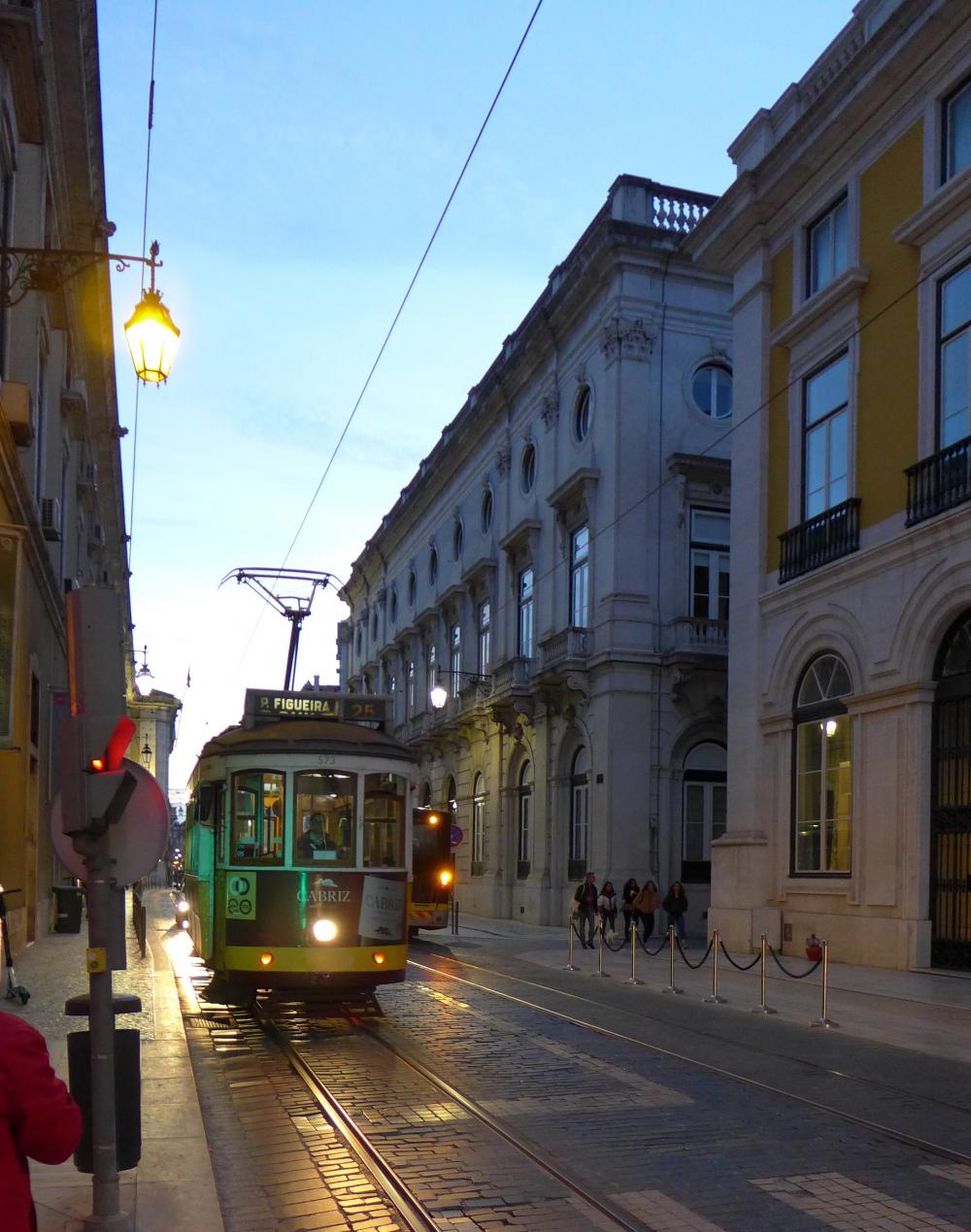 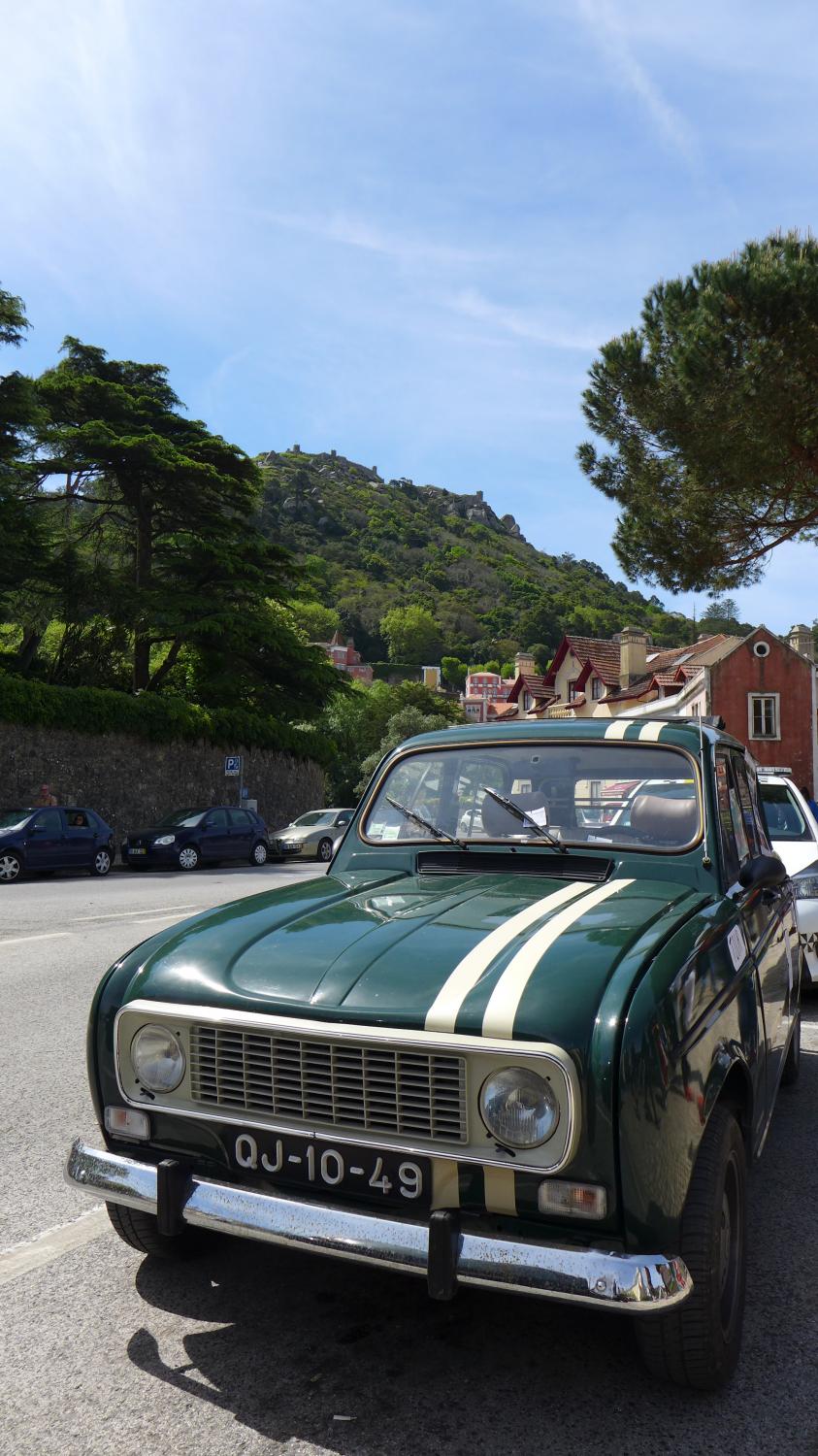 You can rent an old car in Sintra and tour the region.