Tlejourn are doing their bit to help save the planet, one sandal at a time

Thailand's beaches and idyllic waters continue to attract visitors from far and wide. But with more and more debris washing up on its shores, the scale of the environmental crisis threatening Thailand's marine and coastal resources becomes ever more apparent. Urgent action is needed. Thankfully, some local groups are taking matters into their own hands, often in creative and surprising ways.

A total of 80,000kg of marine debris was collected along the coasts of Koh Adang, Koh Rawi and Koh Lipe, the popular island destinations in the Andaman Sea, during a three-month period in 2016. Among the waste were hundreds of thousands of pieces of flip-flops, totalling around 8,000kg.

So far about 25% of these broken rubber sandals have been recycled, turned into stylish handmade sandals produced by a group of housewives in the southern province of Pattani. The recycled flip-flops are made under the brand name Tlejourn, meaning journey across the sea.

"We're glad to have a chance to make recycled sandals," said Supatra Cometan, 42, leader of the group. "It is a product that provides us with regular income and, at the same time, helps reduce waste. Tlejourn will make people more aware of the problem of marine waste."

Over the past three years, the group has produced about 2,000 pairs of flip-flops.

"Most of our customers are foreigners. Thais are not as interested. They say the shoes are too expensive or the colour is unappealing," she said.

The group has five members, most in their 20s. Two are single mothers with small children. After their husbands died due to the violence in the South, they had a hard time finding new sources of income. Although their community in Ban Klong Manang is located in Pattani's Muang district, finding work was difficult. No public transportation passes the village, making it difficult to get around, and they would have had to hire a nanny to take care of their children. The expenses would have exceeded the minimum daily wage. 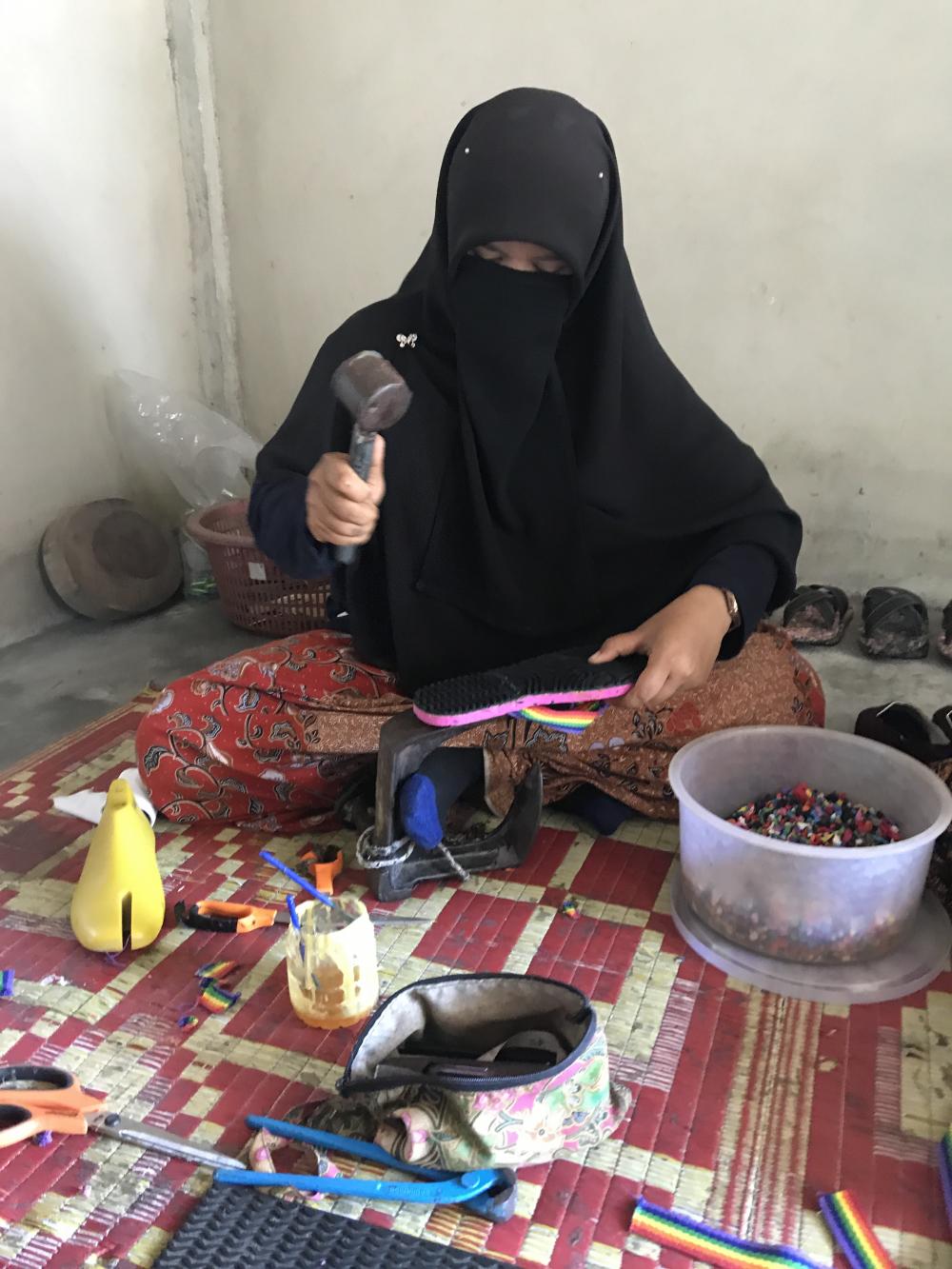 A woman hammers the rubber outsole after glueing. Karnjana Karnjanatawe

Finding work with Tlejourn, therefore, was a godsend. Working in the village means they save on transportation and can keep their children with them.

The group works in Supatra's house, in a room converted into a workspace. Making the flip-flops allows them to earn at least 3,000 baht a month.

"The income is not high but it's enough," Supatra said.

Prior to making the sandals, Supatra's group made Batik bags. Wanita, a social enterprise helping women in the Deep South to have their own incomes, introduced Supatra to Dr Nattapong Nithi-Uthai, a lecturer at the Rubber Technology and Polymer Science Department of the Science and Technology Faculty at Prince of Songkla University, Pattani Campus. It was his assistant, Padinya Aree, who came up with the idea for Tlejourn flip-flops. 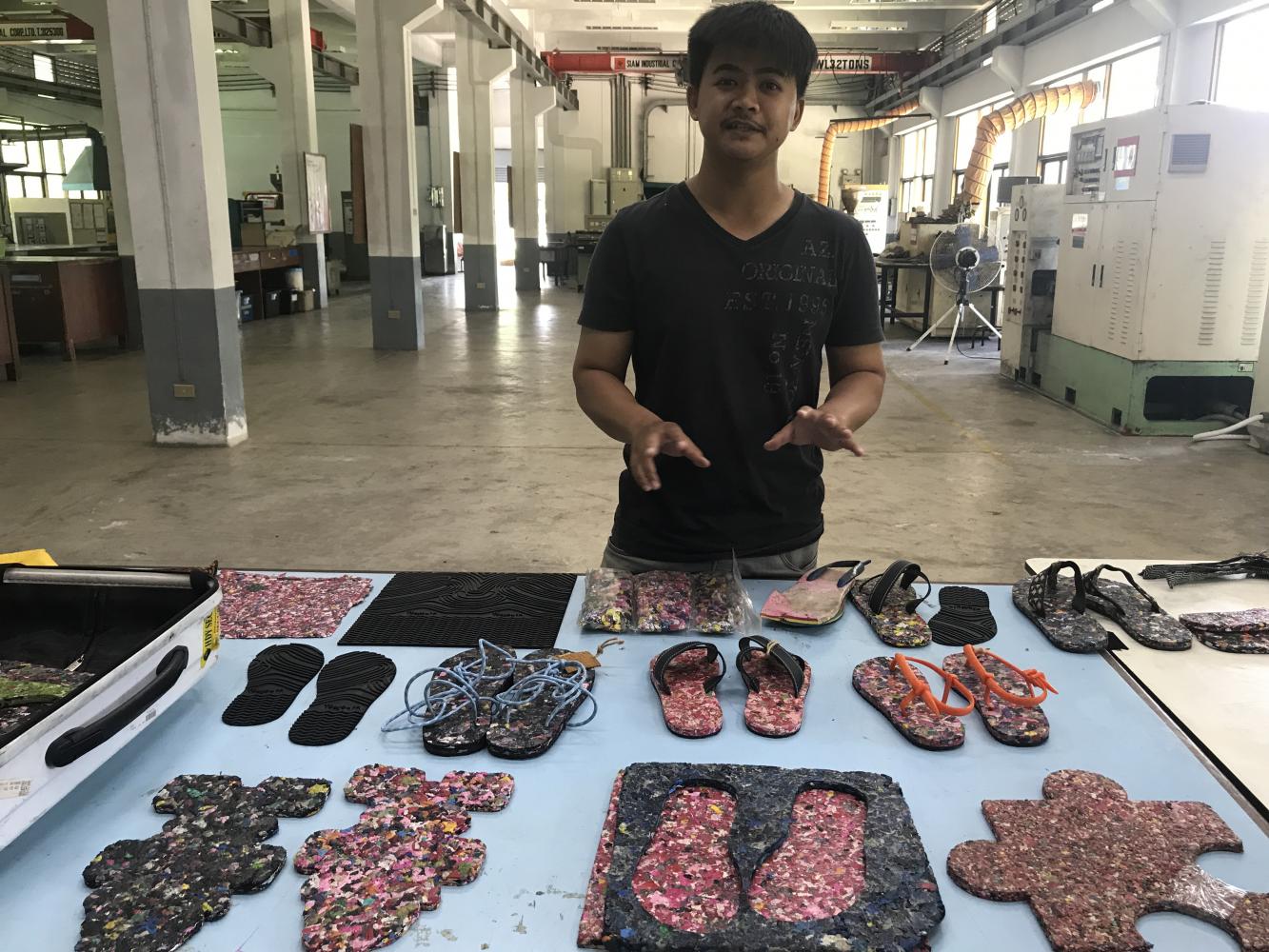 Dr Nattapong and Padinya were looking for southern-style fabric bags as environmentally-friendly packaging for their first lot of 50 recycled sandals. After they met Supatra and her team, they decided to show them how to make the recycled shoes.

The idea of making recycled shoes first came to Padinya four years ago when he went to a training camp in Bangkok co-organised by the Bangkok Metropolitan Administration and One Young World, a UK-based non-profit organisation aiming to help young leaders develop solutions to global issues.

There, he devised an interlocking rubber floor mat made from recycled flip-flops. The product is durable and has been used in his department's pilot plant to this day. After he presented his idea to the camp, he was asked if he could make new flip-flops by recycling old ones.

He brought this idea back to Pattani, and asked Dr Nattapong, his adviser, to help him. Dr Nattapong helped raise initial funds through crowdfunding. But there was a problem: neither Dr Nattapong nor Padinya knew how to make flip-flops. 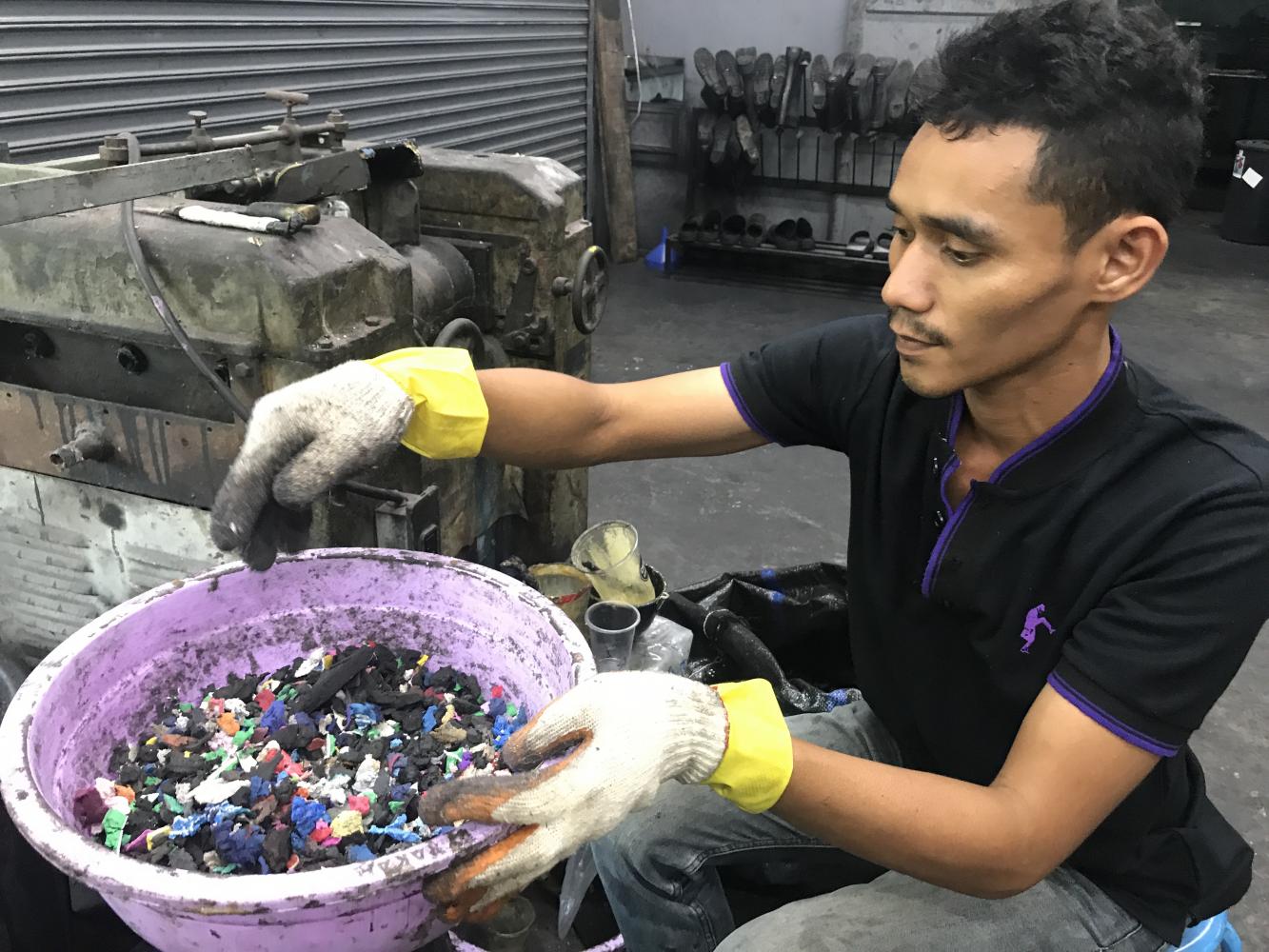 "We know rubber and polymer. We know how to recycle them. But we didn't know anything about the shapes of human feet and how to make shoes," said Padinya.

He decided to take part in a workshop organised by TiiD Design and Innovation Centre in Bangkok. With the knowledge and tools gained from this experience, Padinya and his research team spent about six months, through trial and error, trying to come up with a prototype.

"The colour of the flip-flops wasn't bright because, when old sandals float in the sea for too long, the colour fades away. Around 70% of the waste we found was blackish," said Padinya.

Like other flip-flops, the recycled sandals are water resistant, but they are heavy because of the compressed old rubber. The texture is hard with little flexibility. However, they are durable and each has a rubber outsole.

"Our product is 80% recycled. We tried to make it 100%, but it wasn't tough enough so we had to add the rubber sole for durability," he said.

The process of making Tlejourn sandals starts by washing the old flip-flop pieces in a machine. Broken buoys can be used as they are made of polymer. After the dirt and sand are removed, the pieces are put into a rubber-shredding machine. The result is about 450g of rubber crumbs, which is then mixed with polyurethane glue. 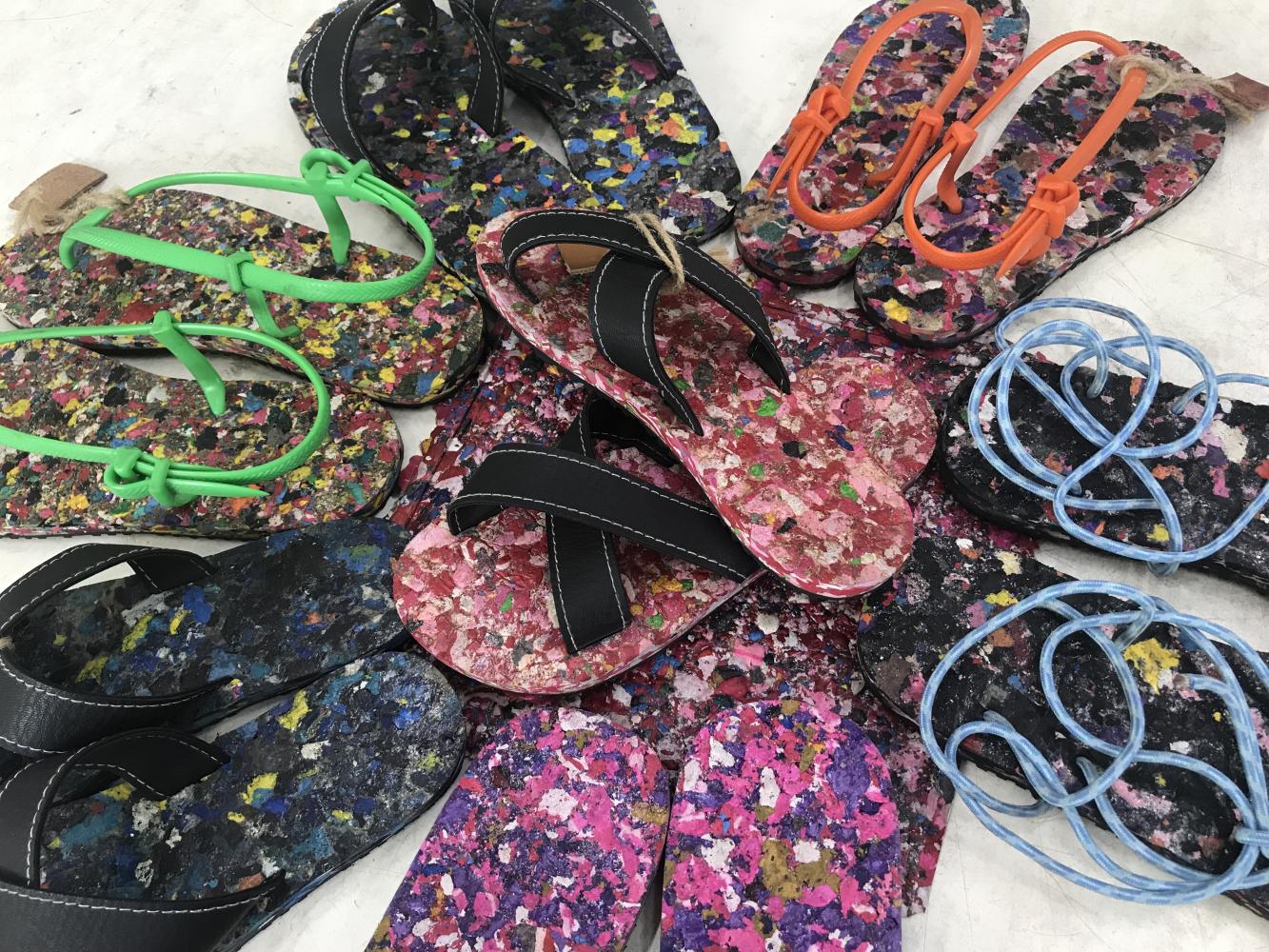 The mixture is spread on a rectangular aluminium tray and put into a rubber heat press machine. After 10 minutes, the rubber crumbs turn into a multicoloured rubber sheet about 1cm thick. One sheet is big enough to produce a pair of flip-flops.

Originally, the shoemaking process was done at the university. Since they outsourced the work to Ban Klong Manang three years ago, Padinya and his team have been producing recycled shoe soles. These are sent to Ban Klong Manang. The women finish the sandals and send the completed products back to Padinya.

"We pay the women when they deliver the finished products, not after we sell the shoes," he said.

The shoes are kept in a stockroom. The Tlejourn team occasionally have the chance to promote their ideas and products at trade fairs and expos around the country and even abroad. The products are also available online via their Facebook page (facebook.com/Tlejourn).

The research team sometimes works with professional shoemakers like TMD and Larinn to produce boots and casual shoes for women and men. These products are limited edition and made to order only.

They also hold workshops at the university to educate groups of students or the general public about marine waste and how they make Tlejourn sandals.

Somewhat depressingly, the team is never short of raw material. Every week, a new lot of broken rubber sandals is delivered by a volunteer group called Trash Hero Pattani. They collect rubbish from beaches throughout the province and separate organic waste from recyclable material, like plastic, glass, lighters and old sandals. The used flip-flops are sent to the Rubber Technology and Polymer Science Department for the Tlejourn project, while the municipality manages the rest.

Thailand is among the top 10 countries in the world polluting the oceans with rubbish. The efforts of Tlejourn and groups like them can only make minimal impact in dealing with a crisis of this scale. But the work of Tlejourn can serve as an inspiration to others throughout the Kingdom. And they are keen to get others on board.

"Tlejourn is an open innovation. We open for anyone to use our techniques to create new products or even shoes of their own.

"We are glad if more people are interested in recycling because we will have more friends," Padinya said. 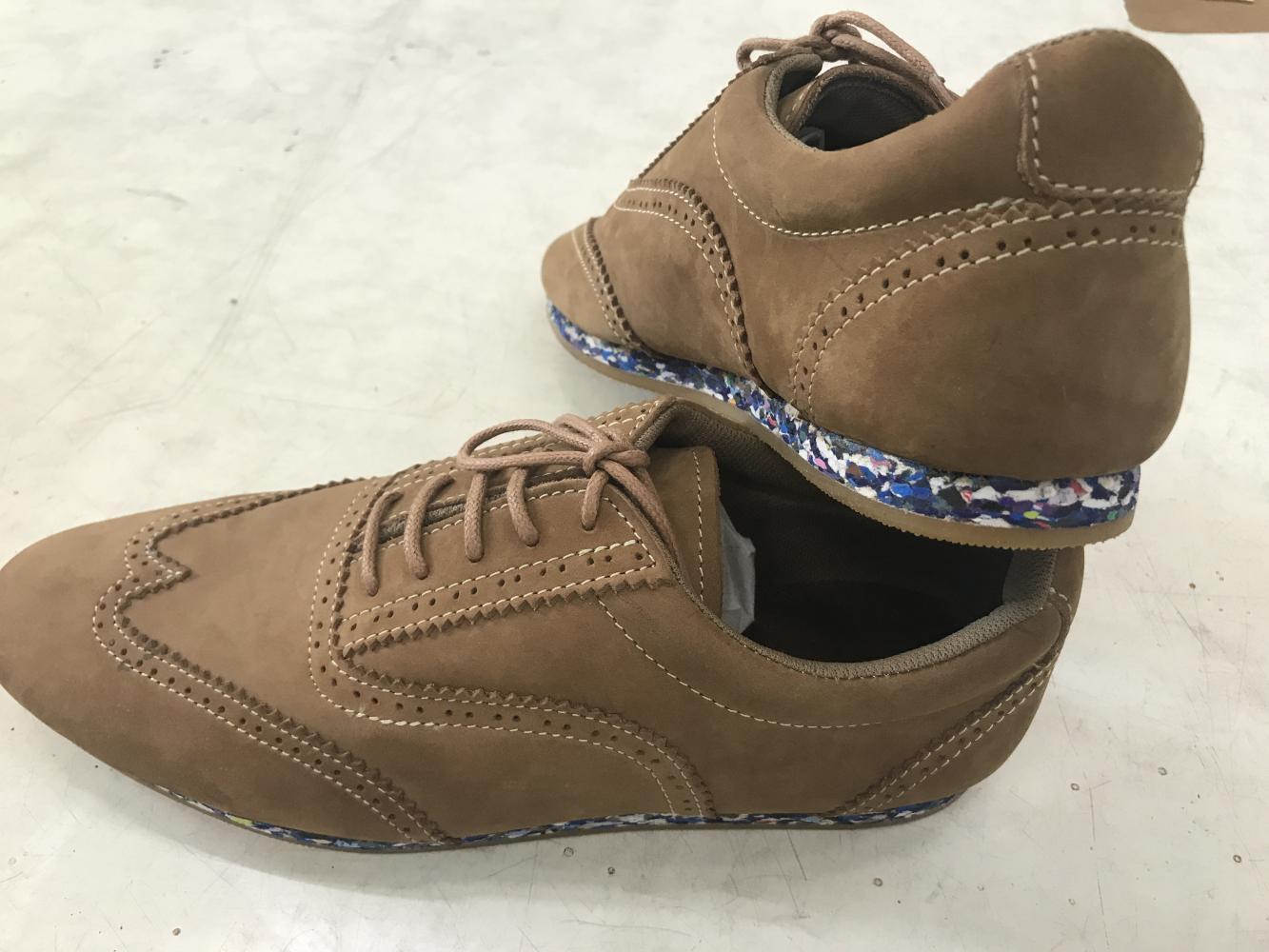