The Royal Horticulture Society (RHS) Chelsea Flower Show is the largest and most famous flower landscape and garden show in the UK. It started out as "The Great Spring Show" in 1862, held in a single large tent at the RHS garden in Kensington, London, before it was moved to the grounds of the Royal Hospital Chelsea in 1913.

Today, the show is arguably the world's most prestigious event of its kind, featuring the very best in horticulture. More than 165,000 visitors come annually to admire the inspiring garden concepts by some of the world's top landscape designers, as well as incredible plants and exciting new varieties to try and cultivate at home.

At this year's show, which took place from May 21-25, Kate Middleton, the Duchess of Cambridge, unveiled a garden she designed called "Back To Nature". This stood alongside numerous award-winning show gardens of large and small scale on display along Main Avenue. The proud centrepiece of the show was the Great Pavilion which housed over 100 stunning displays by specialist growers from the UK and overseas.

Once inside the vast pavilion, visitors were dazzled by thousands of colourful flowers and plants used in award-winning innovative designs and horticultural exhibits. A total of 92 medals were presented across various categories.

It was hard to find a specific favourite display, as all of them were beautiful in their own ways. Here is a sample of some the more eye-catching pieces in the pavilion -- plenty to give Thai lovers of pretty flowers an overview of the winning creations at this world-class show.

"Mountains Of Abundance" by the South African National Biodiversity Institute was one of the gold medal winners. A distinct representation of South African landscapes, the creation featured a contemporary handmade slate mountain, with one side depicting a silhouette of Table Mountain and the other a silhouette of the Magaliesburg Mountains. Abstract waterfalls and streams were created with bright traditional Ndebele hats against the slate mountains. Featured on the wild slopes of the mountains were various species of protea, aloe, diasa, restio and fynbos.

A gold medal-winning stand by Peter Beales Roses featured follies swathed in climbing and rambling roses -- both old-fashioned and modern. It came with a rose arbour and bench which stopped many visitors in their tracks and drew them in to enjoy the array of colours and pleasant scents.

The display of chrysanthemums by the National Chrysanthemum Society, also a gold medal-winner, recreated childhood memories using different types and forms of flowers, as inspired by British children's TV shows The Flower Pot Men and Rainbow. The exhibit featured a giant Zippy (a character from Rainbow) of bronze-orange chrysanthemums while Bill and Ben, the flower pot men, greeted visitors at the front of the stand. 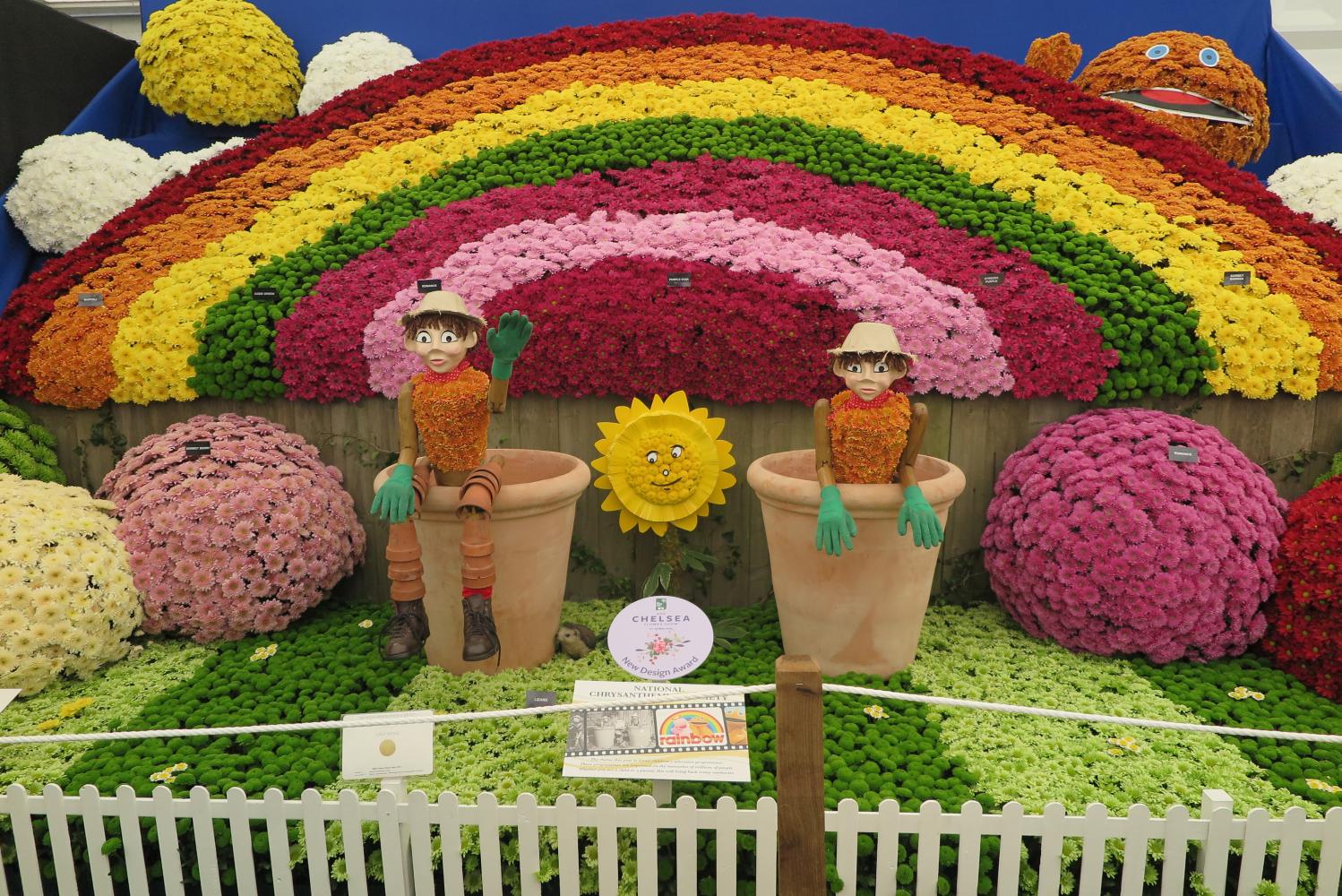 A display of chrysanthemums inspired by children's TV. Patcharawalai Sanyanusin

"Come What May" by Festoon Flowers was a fresh botanical suspension of individual stems of natural materials. Inspired by Britain's countryside hedgerows, the mesmerising floral installation featured a hundred clear glass test tubes hanging from the ceiling and dressed with delicate displays of seasonal flowers, seed-heads, foliage and meadow grasses, curated into clusters. It was one of four lavish and colourful installations that was entered into the floristry competition in the pavilion. Even though it didn't win, it certainly gave visitors ideas on how to come up with an easy, mini-hanging garden of their own at home. 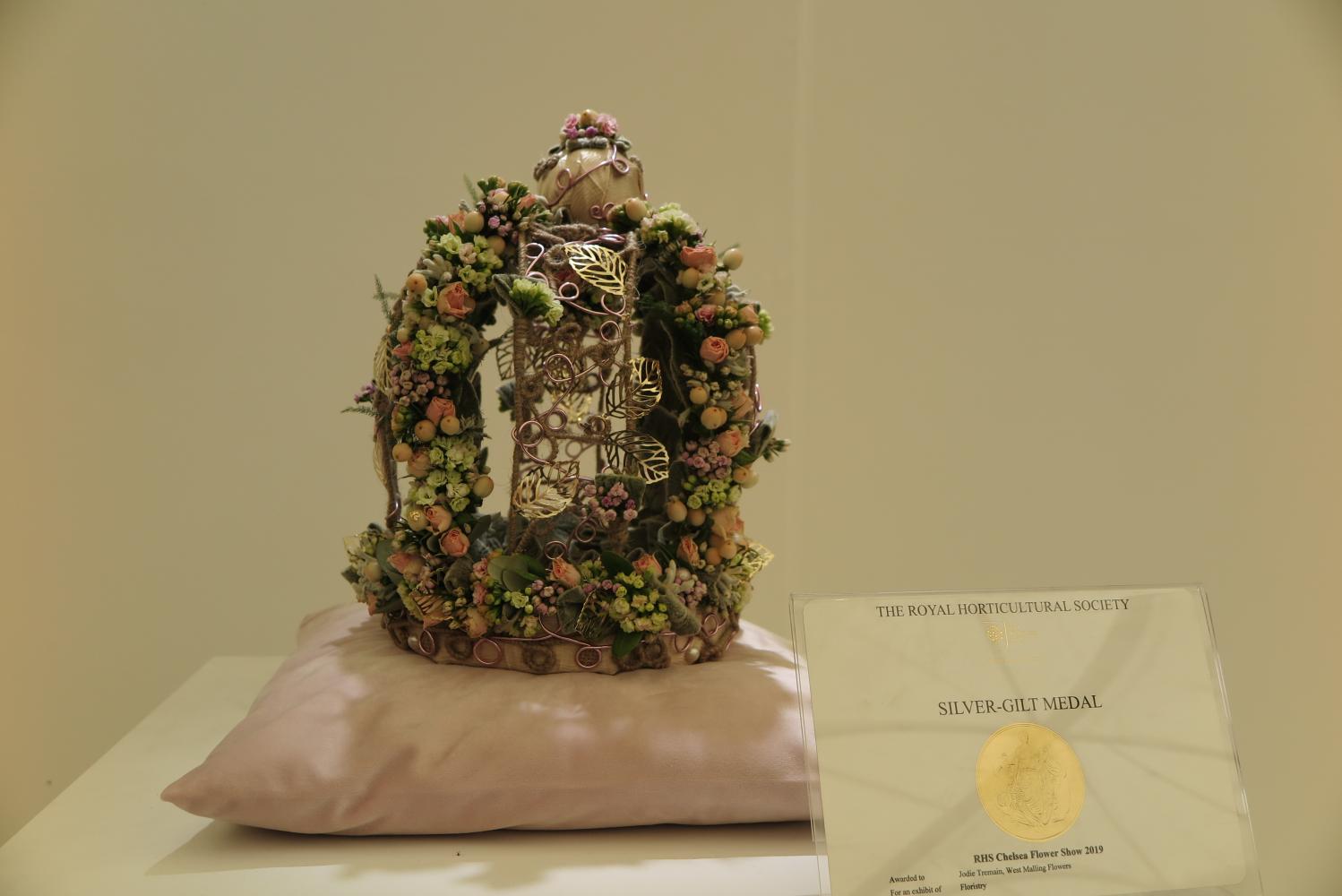