A message that resonates

"I think I am a living example of somebody who is where she is today in the world as a result of a supportive family environment. So I can see how people who didn't have that could be disadvantaged," remarked Bhatia, who holds a BA in history from Calcutta University, an MA in political science from Yale University and a Juris Doctor in Law from Georgetown University.

Bhatia was recently in Bangkok for the launch of the new UN report and for high-level consultation with the governments of Australia and New Zealand and Nordic representatives, as well as for meetings with various partners.

During an interview with Life, she said families today don't take one form. Families are very diverse and so the notion of a nuclear heterosexual family is challenged by reality because of multiple colours and forms, shapes and sizes, and people must support such diversity.

Bhatia thinks the fundamental message of the report is that laws, policies and norms can promote safe productive family environments for everyone or not, so she noted that as UN Women it is in their interest to see governments, civil societies and businesses recognise that families are quite diverse and that recognising the diverse shape and form of families is in a way supporting women's rights and ensuring that all types of families can flourish.

"Our vision for families is that they should be a home for equality and justice, and for the preservation and advancement for the rights of girls and boys," said Bhatia.

Some of the factors that continue to hinder that process, she said, were laws. She believes laws and the legal framework are critical building blocks and pillars for the advancement of women's and girls' rights.

"When we look at what is in the data, to determine where we are on gender laws, we find some interesting stats. For example, out of the 33 countries that are in the Asia Pacific, 15 actually don't have laws that address discrimination based on gender and employment. Twelve don't have legislation on sexual harassment in employment. The whole world is talking about the #MeToo movement, but when you actually see it on the books, there is huge room for improvement in Asia Pacific. Then 27 of the 33 countries in Asia Pacific actually do not address equal pay for work of equal value."

This is a huge challenge for the region, she said, because they are so behind the global average. 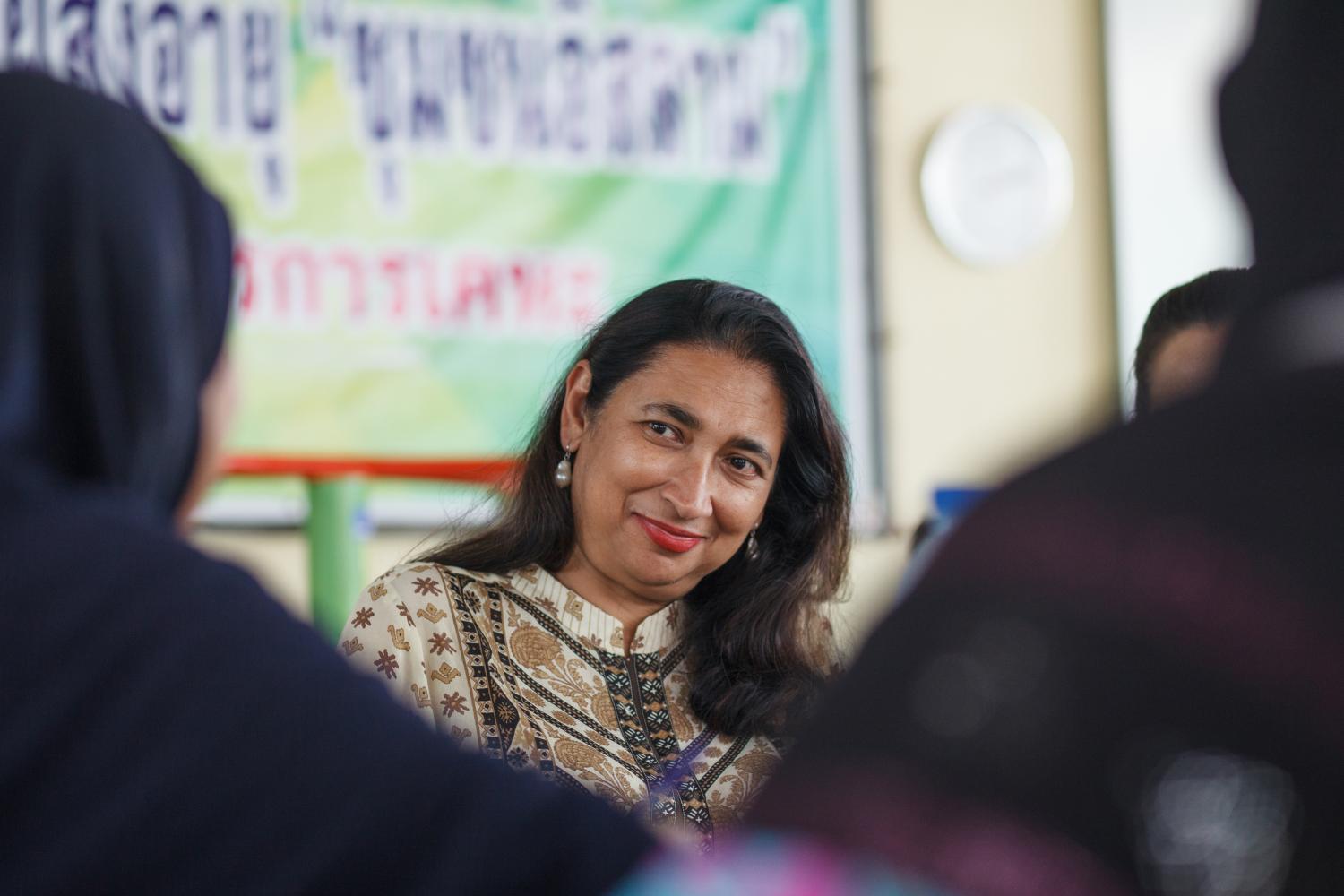 Anita Bhatia listens to migrant women workers in Tak province speak on how knowing about their rights and developing their career skills has helped them avoid becoming victims of human trafficking. UN Women/Bundit Chotsuwan

Additionally, girls and boys, sons and daughters, do not have equal rights to inherit assets from parents in 11 out of the 33 countries.

"This is really about the perception of the value of daughters related to sons. I have both myself, so I can relate to this, because I would not want to disadvantage my daughter relative to my son in any assets I would choose to leave to them.

"As a parent I would absolutely see the need for fair, just and equal treatment for girls and boys, but actually the laws in one third of the countries in the region don't recognise this, so I think one of the reasons we are behind is that we actually don't have the right laws on the books yet. So there is a huge unfinished agenda when it comes to nondiscrimination law, and for just levelling the law and making sure girls and boys, women and men, are actually equal under the law."

When asked why we seem to be regressing in a day and age when people should be making progress on such issues, Bhatia is of the opinion that many countries are seeing a rolling back of democratic institutions, attention to human rights, and attention to the rights of minorities and women globally. And that is an alarming trend.

"At the same time, we should take pride in the fact that there has been some progress. I think we need to always come back to the fundamentals, which are: do we have a legal environment that advances gender laws?

"In addition to the first point, which is on the legal environment, the second important thing that we have to be worried about is women's physical safety and that economic security in families is guaranteed. We think of families as places of love and care, but families are often not places of love and care. I say that because globally 3 billion women and girls live in countries where rape within marriage is not explicitly criminalised, and in the Asia Pacific, marital rape is not explicitly criminalised in more than half the countries."

As long as there are discriminatory laws in society, and social norms that deprive women of the opportunity to make a choice independently about marriage, motherhood and career, we are never going to get to a just and equal society.

In the Asia Pacific, research says girls and women spend 11 times more of their day than boys and men doing unpaid care work and domestic work. 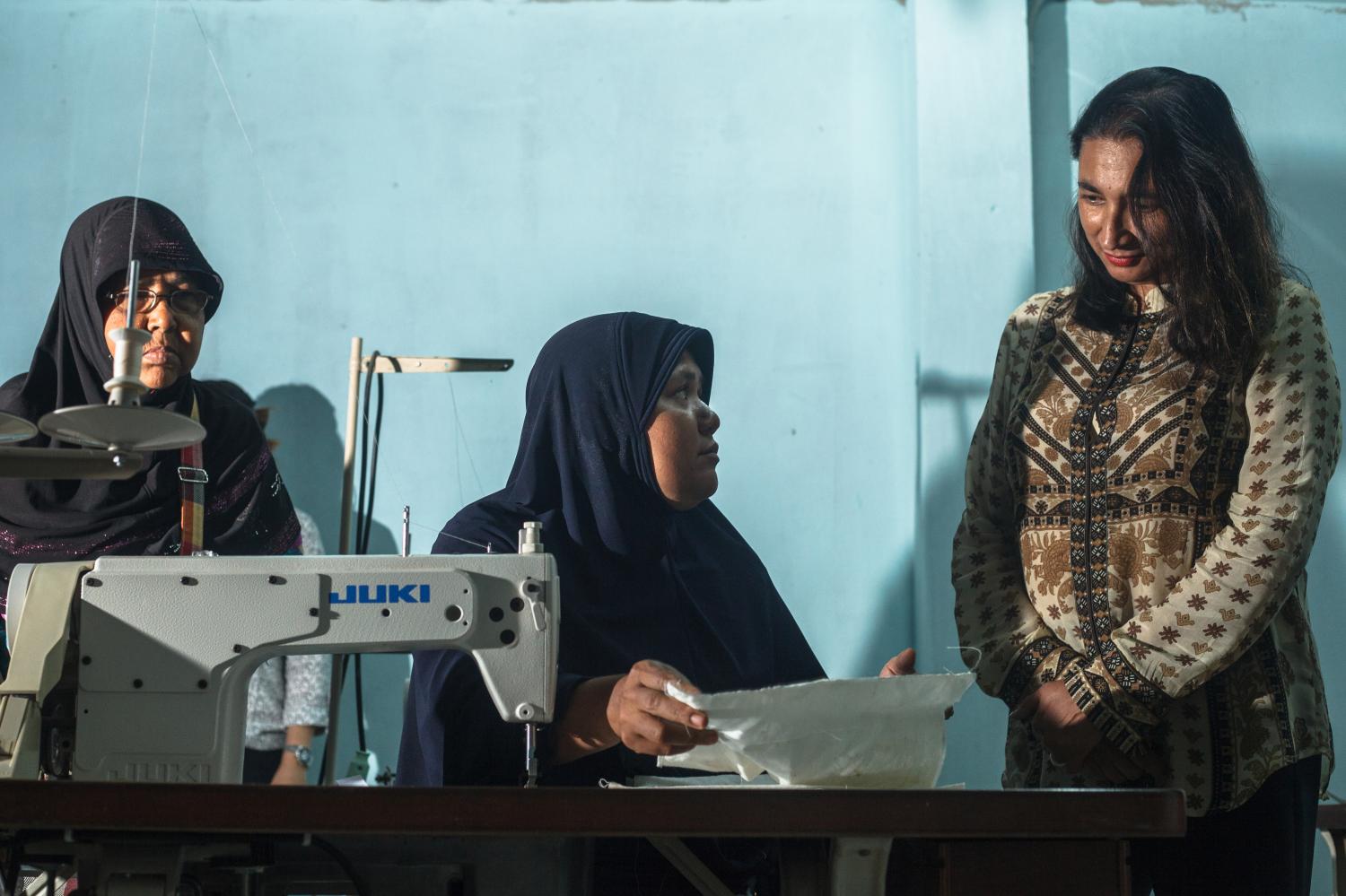 Anita Bhatia visits the Islamic Community Centre in Tak province, where women are taught how to generate an income for themselves and their families through vocational skills such as sewing and the marketing of their products. UN Women/Bundit Chotsuwan

"As women, we have to self-check and look at ourselves and see if it's not just the laws but our norms, our stereotypes, our thinking and attitudes about our roles for girls and boys, what one does and what the other does.

"One key point I want to make is that it is very important to do work that addresses this issue of attitudes and stereotypes. UN Women has a partnership called the Unstereotype Alliance, where we work with big business to try to influence people's attitudes through advertising and marketing."

Bhatia, who has had a distinguished career at the World Bank Group, also shared how her upbringing in India played a pivotal role in the person she is today.

"We had a big celebration for our dad's recent 90th birthday. I come from a family where my mother died when I was 18. On her deathbed she said one thing to my father -- she said whatever else you do, promise me that you will educate the girls. My father told this story of how he as a widower really had no idea as to what to do with these two girls. The only thing he knew was that he had to make sure that they got a very good education. He told this absolutely touching story at his birthday celebration of how he used to make sure that we had clean white socks, and nicely polished black shoes so we looked good when we went to school, and that when the time came to marry us off, and lots of people were getting married, he said, 'No, you have to focus on your education'.

"What I realised on my father's 90th birthday, although I never thought of it this way: he was a true champion for gender equality as of course was my mother, who on her deathbed made certain that whatever else my father did, he would educate his daughters."