What's past is prologue
Opinion

What's past is prologue

Chang was filmed more than 90 years ago, it is a glimpse of history, and maybe our future

The movie Chang is a cinematic curiosity from nearly 100 years ago.

Made in the jungles of northern Siam, this 70-minute pseudo-documentary follows a family of villagers that battles tigers, leopards, snakes and, ultimately, stampeding elephants. Watching it, you feel like you've been thrown into this humid, claustrophobic world of dangerous beasts lurking behind every tree.

The story of how the film was made is as fascinating as the movie itself. Two American cinematographers made the journey all the way over here, then trekked deep into the malaria-infested jungles to film for 18 months.

The filmmakers were Merian C. Cooper and Ernest B. Schoedsack -- and their Siamese experience was the catalyst for their big project seven years later, namely directing King Kong, in 1933.

(If you are familiar with King Kong you will see a couple of shots in Chang that are replicated, such as the screaming infant who is snatched away by its mother before being trampled on, and the giant gates that are used to corral the elephants as well as to keep King Kong away.)

Chang is legendary for so many reasons. They used hand-held cameras and put their lives on the line to get close-ups of angry tigers. When filming those tigers, Schoedsack held the camera while Cooper trained a gun on the subject.

In 1929 it was nominated for an Academy Award -- the very first year the Oscars were dished out, in the category of "Unique And Artistic Production". In the USA it was one of the biggest movies of 1928 in what was the fledgling movie industry.

I long had a fascination to see this movie, since it was filmed in northern Nan province. To be able to see the jungles of Nan of 90 years ago was a dream that looked as if it would not be realised, since the movie had been lost for a long time.

Last Monday night I managed to make a check against that bucket-list entry. Twenty-five years ago a copy of the movie was found -- and on a humid night, seated in a small open-air terrace overlooking the Mekong River, my dream came true.

Greetings from Luang Prabang, Laos! The arrival of a sibling from Australia, and his wish to visit Laos, put us on a 75-minute flight to this, one of the quietest cities in the world.

The last time I was here was in 2002. I am guessing the city has doubled in size, but the World Heritage-listed inner city still looks the same. And it really is quiet. It would be a perfect place to write a novel or recover from an acrimonious divorce or some other life-changing activity that requires minimal noise.

There are two chief attractions here; climbing Phou Si mountain in the middle of town, and watching the couple of hundred monks from the town's 35 temples who collect alms in the morning. The former requires a lot of grit and determination. At the summit of Phou Si you are met with two things: a stunning view, and Lao school students intent on practising their English, not unlike the ones who swarm the Grand Palace in Bangkok. I like to have fun with these students who really don't listen to my answers, such as young Sombat who accosted me and had a conversation that went something like this:

"Where do you come from?"

"And how long have you been in Laos?"

"Well I broke out of jail last Friday, fled my home country before the cops could catch me, survived a shoot-out in Vientiane, caught a slow boat down the Mekong to here last Saturday … so three days."

"And what is your favourite colour?"

As for the procession of monks, it was a nice sight, though I'd describe it as a "smattering of monks" rather than a "procession" but I don't want to rain on Luang Prabang's parade -- I left that to nature, since this is now the rainy season.

But back to Chang. While strolling through this serene town, we came across a billboard advertising nightly free screenings of Chang at the Xienthong Palace (formerly a palace, now a 5-star hotel).

I excitedly grabbed my sibling's arm, pleading to go. And that is how we ended up seated on that terrace with 20 others, sipping Long Island iced teas and peering through a portal to the Nan province of 90 years ago.

So why is this movie being shown in Luang Prabang, 200km away from Nan? My guess is that a century ago the cultural lines were blurred between the two countries. Laos and Thailand used to be under the same umbrella of Siam until the French took over Laos in 1893 and drew up the borders we know today. But even by the early 20th century, those borders shifted a little and Nan was part of Laos for a time. 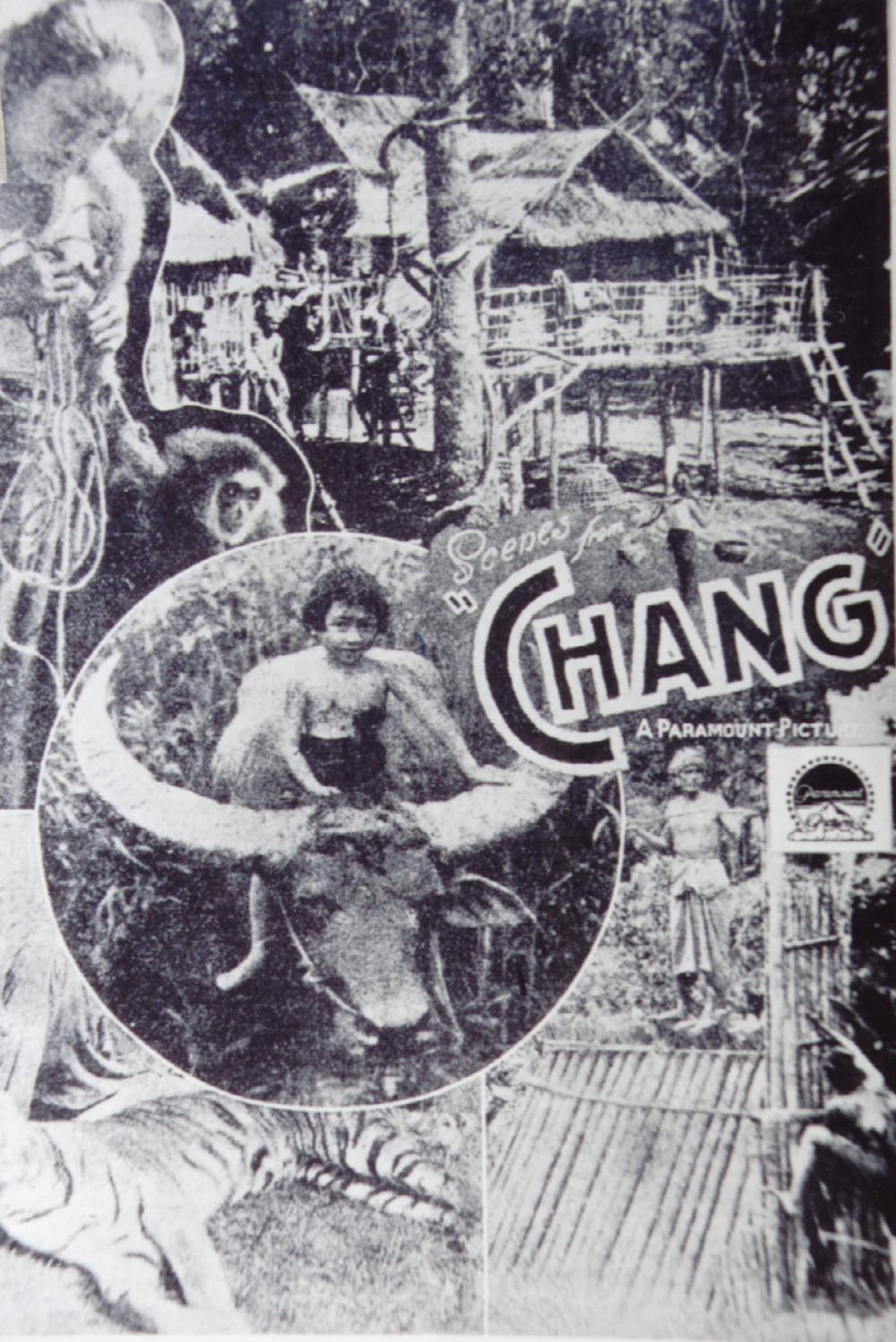 Chang: A Drama Of The Wilderness (1927). Photo: Thai Film Archive

The actors in Chang look more ethnically Lao, and this is perhaps why Luang Prabang claims ownership. They were not technically actors -- they were villagers, with the main actor being the two Americans' guide and interpreter before having a date with thespian destiny.

To me, watching Chang on that terrace was one of those enduring life moments, and not just because of that Long Island iced tea.

(The movie is free, but patrons are asked to purchase a drink to move the budgetary cogs along, and almost all of those drinks were an alcoholic nature, thus putting me into a corner, though hardly kicking and screaming.)

But watching the movie brings up a few issues. First, those bamboo houses in remote Thai villages -- not much has changed in 90 years. With the exception of an absence of television sets blaring out night-time soap operas, those houses on stilts could have been from 2019.

The jarring aspect to the movie is the killing of wild animals. Chang is about villagers surviving in the harsh jungles of northern Thailand/southern Laos, where there are daily threats from tigers. These are wantonly and victoriously shot dead throughout the movie. We are expected to cheer the natives as they play with the lifeless head of a newly-killed beast. Similarly, when villagers round up stampeding elephants in a krall, then tie them up and beat them with sticks to break their spirits, we are meant to feel good.

We have the hindsight of 90 years. The underlying theme of Chang is the all-powerful jungle will always fight back and win. We are powerless over nature, the title card of this silent movie proclaims at the end.

We now know that after a century that the jungle, like the elephants, has been beaten into submission. It doesn't exist anymore, thanks to deforestation, agriculture and five-star resorts. The tigers, elephants, leopards, bears and snakes have been shot and eaten for 90 years. And now we sit on the cusp of an era of global warming, wacky weather and rising ocean levels.

It could well be we humans end up wiping ourselves out, and if we do, then what happens?

We need only look to the prophetic title card at the end of Chang for the answer. How we like to think we have destroyed nature, or that nature is powerless over us. When we are decimated, and long gone from this Earth thanks to our incessant pilfering of natural resources, the jungle merely grows back.

Depressing or reassuring? I'm not sure. Just go and see the movie if you're in town.