The Setouchi region may not top Japan's tourist sites, but it's a worthy destination for those seeking scenic beauty and simple lifestyles Story and photos: Karnjana Karnjanatawe

The Setouchi region might not be at the top of your list if you are a first-time traveller to Japan. But it can be a perfect destination for those who love to explore more off-the-beaten path locations and travel like locals. 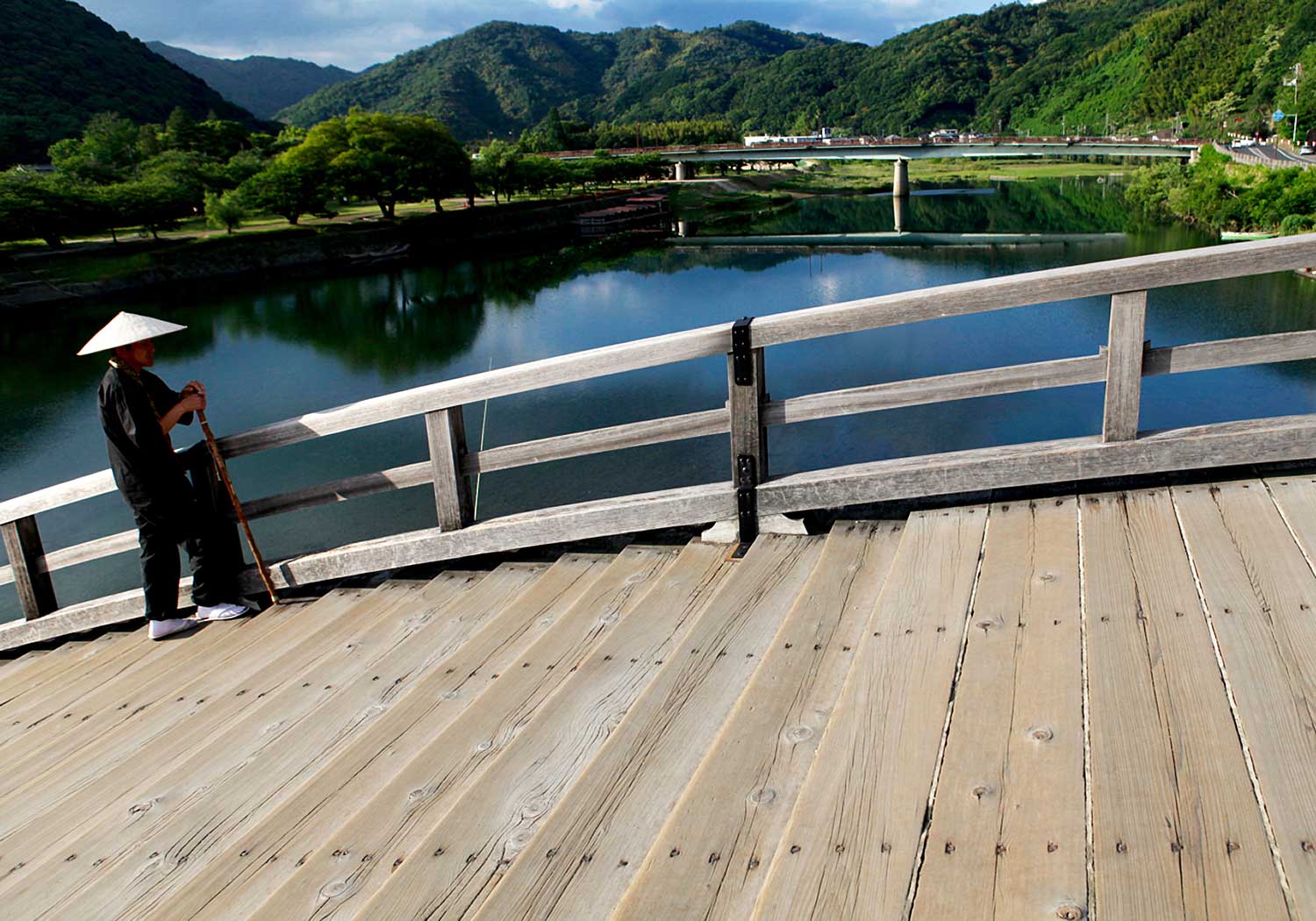 Known as one of the landmarks of Yamuguchi, Kintaikyo Bridge is a five-span arched wooden bridge over the Nishiki River in Iwakuni City. Originally built in 1673, the present bridge is the fourth version; it was renovated in the early 2000s. The beauty is not only on the surface, it also lies underneath. Standing under the bridge, you can see the timberwork technique combined with metal belts and nails to make the bridge strong. To cross the bridge, you need to pay a fee. The rates are 300 yen (86 baht) for adults and 150 yen for kids.

"Setouchi means Inland Sea. The name might not be familiar to many people, but the region is known as one of the most charming destinations in Japan," said our guide.

The Seto Inland Sea or the Inland Sea for short lies to the west of Kyoto, between the main islands of Honshu, Kyushu and Shikoku. It covers more than 400km from Osaka to Kitakyushu and also includes 3,000 islands and islets. Thus, Setouchi is known for its outstanding natural scenery, fresh seafood, culture and history.

The list of things to do and places to go in the region is quite long and cannot be done in one trip. Some of the highlights are the scenic view of the Kurashiki River and old streets in the Kurashiki Bikan Historical Quarter in Okayama, the 346-year-old Kintaikyo Bridge in Yamaguchi and the Dogo Onsen, which is known for being Japan's oldest hot spring. Dogo Onsen is located in Ehime, and is a frequently visited destination for Japan's imperial family.

The 123 vermilion torii gates and 100m-long walkway are a famous part of the Motonosumi Inari Shrine in Yamaguchi. Locals believe that worshipping the deity of the shrine will grant them luck in business, study, safe journey and fertility. The shrine is also popular among tourists who want to make a wish by throwing a 5 yen coin into a donation box. The box is hung in the middle of the 5m-tall gate. They believe their wish will come true if the coin lands inside. If you have tried without success, you can simply put the coin into another box attached to the lower part of the gate instead.

For food, the region has plenty to offer. You can find one of the best udon restaurants in Kagawa, dubbed the udon capital. You can even hire an Udon Taxi with a driver who has knowledge of the noodle dish history and importance to the culture. The taxi driver can talk you around the city and lead you to some famous udon restaurants.

Other famous dishes from the Inland Sea are oyster and anago meshi (broiled sea eel on top of rice), which are the popular meals in Miyajima island in Hiroshima. Another must-try is kawara soba in Yamaguchi. The soba is made of buckwheat flour mixed with green tea and served on a heated stone roof tile called kawara. Topping the green noodles are sliced pork and an omelette. It is eaten by dipping the noodles in soba sauce.

The Inland Sea also houses old and famous shines including Motonosumi Inari Shrine in Yamaguchi, the Itsukushima Shrine and the floating torii gate on Miyajima Island in Hiroshima and Konpirasan, which was formally known as Kotohiragu in Kagawa.

The weeklong trip ended very quickly and we had a good time. The impressive experience encouraged us to come back for more.

"You can visit Setouchi any time of the year because the beauty of Setouchi changes every time when the seasons change," said our guide. years ago, appears to be floating in the sea during high tide. The shrine is a sacred site of Shinto, the indigenous Japanese religion that has been practised in Japan since the 6th century. The shrine comprises multiple buildings including a prayer hall and a theatre stage. Some parts of the shrine complex are under renovation. Miyajima, literally meaning Shrine Island, is a holy place so residents of the island are not allowed to give birth, die or be buried there. Be warned that when you roam around the island, deer may quietly approach you and snatch food from your hands or even brochures tucked in your back pocket.

You may have tried udon, a thick wheat flour noodle dish, before but it will be different if you try udon that is made by your own hands. Kagawa is dubbed the capital of udon in Japan. The udon from Kagawa is called Sanuki udon. Sanuki is the former name of Kagawa. The udon is outstanding due to its thick, chewy and firm texture. It is estimated that there are more than 800 udon restaurants, some of which double as udon schools. We joined one udon course at Nakano Udon School. Two staffers at the restaurant taught us how to knead the dough, cut the noodles and boil them in a big pot. We ate by dipping them in salty udon sauce. Our noodle dish was tasty and served with tempura. Before the class ended, staff demonstrated the traditional way to knead the dough by stepping on it. The dough was wrapped in a plastic bag before one staff member stepped on the dough while dancing along with music. She used her weight to knead the dough as this is the secret of making the dough chewy.

Oysters are the most famous seafood meal in Hiroshima. When you visit Miyajima Island, you will see many oyster farms while you are on the ferry to the island. We tried grilled oysters. The size was big and the oysters were fresh. It was served with a piece of lemon. Another famous food on the island is the traditional dessert momiji manju, made of sweet egg dough stuffed with red bean paste. But the snack on Miyajima is unique because it is created in the shape of a maple leaf, or momiji in the Japanese language. Momiji manju has been sold as a souvenir since 1906. Nowadays, it has many choices of fillings including oyster, cod roe and eel. 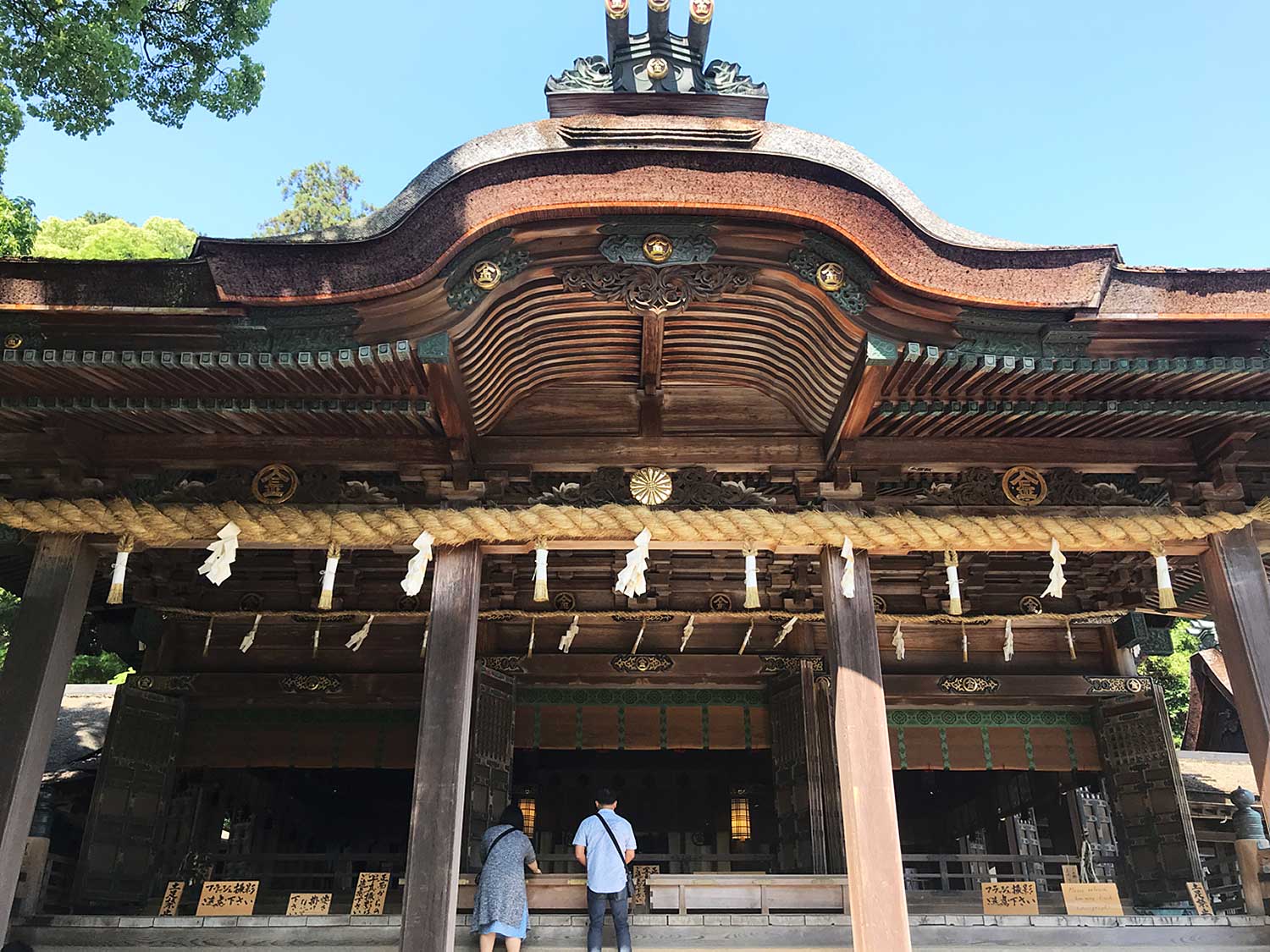 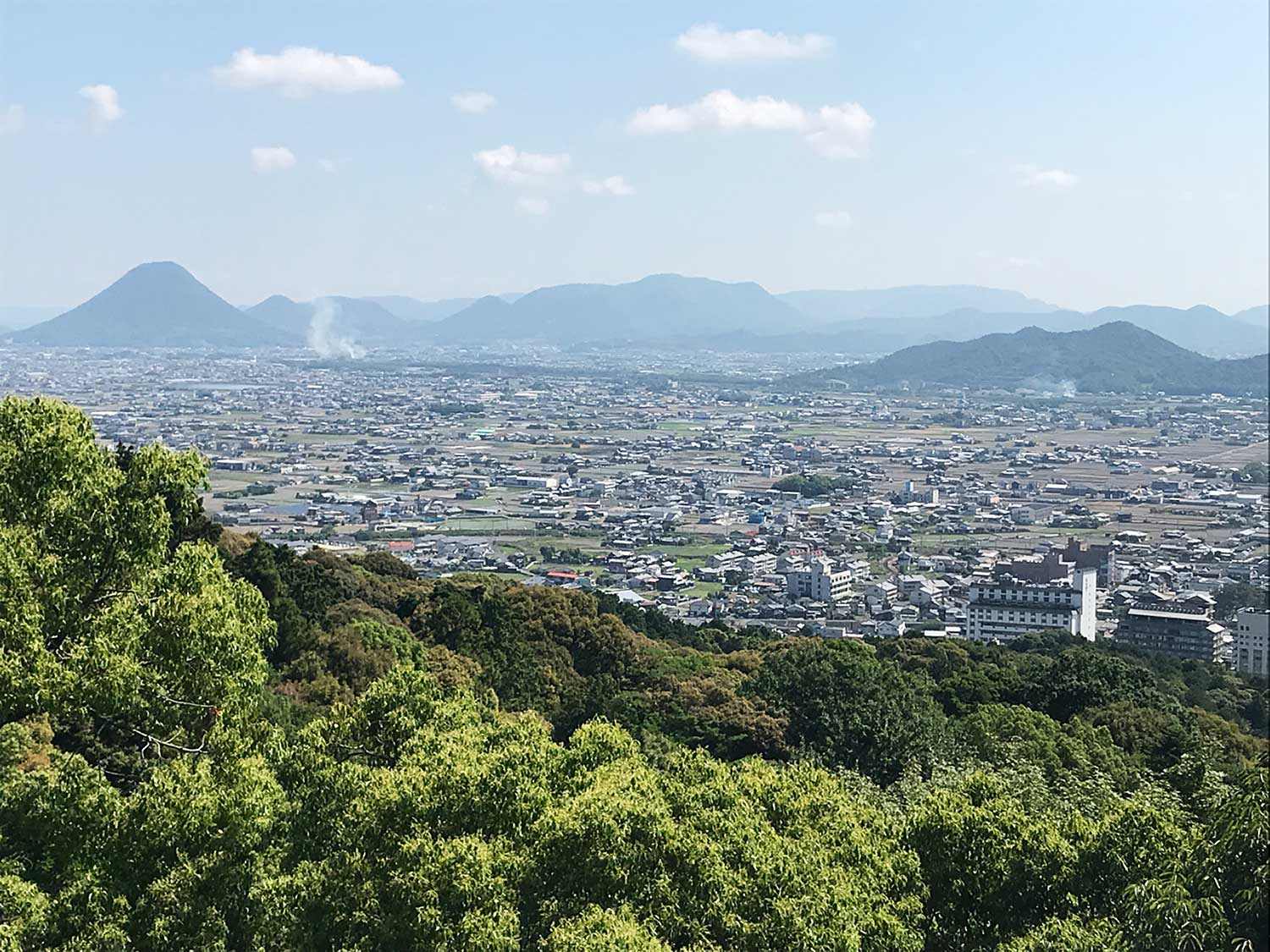 Kagawa Prefecture also has many old shrines. Among them is the popular Konpirasan, a Shinto shrine, where locals worship the ‘God Of The Sea’. To reach the shrine on the hilltop, you have to negotiate 1,368 stone steps. Most tourists stop halfway at the main shrine. If you need help with a walking stick, you can rent one from souvenir shops at the starting point of the trail or hire a palanquin to carry you to the shrine. In the past, people let their dogs handle the mission, according to our guide. The owner put their wishes and donation in an envelope and hung it on the neck of the dog together with a “Visiting Konpirasan” tag. When travellers or pilgrims saw the animal, they helped guide the dog to the shrine to complete its mission. One thing you should try along the walking trail is yuzu candy called Kamiyoame. It is made of yuzu orange juice mixed with sugar. After you pass the Demon’s Gate, you will see five stalls whose owners are descendants of five families who help renovate the shrine. The sweet is made in a fan shape. It is sold with a small hammer for you to break it into pieces before eating. The taste is sweet and a little sour. 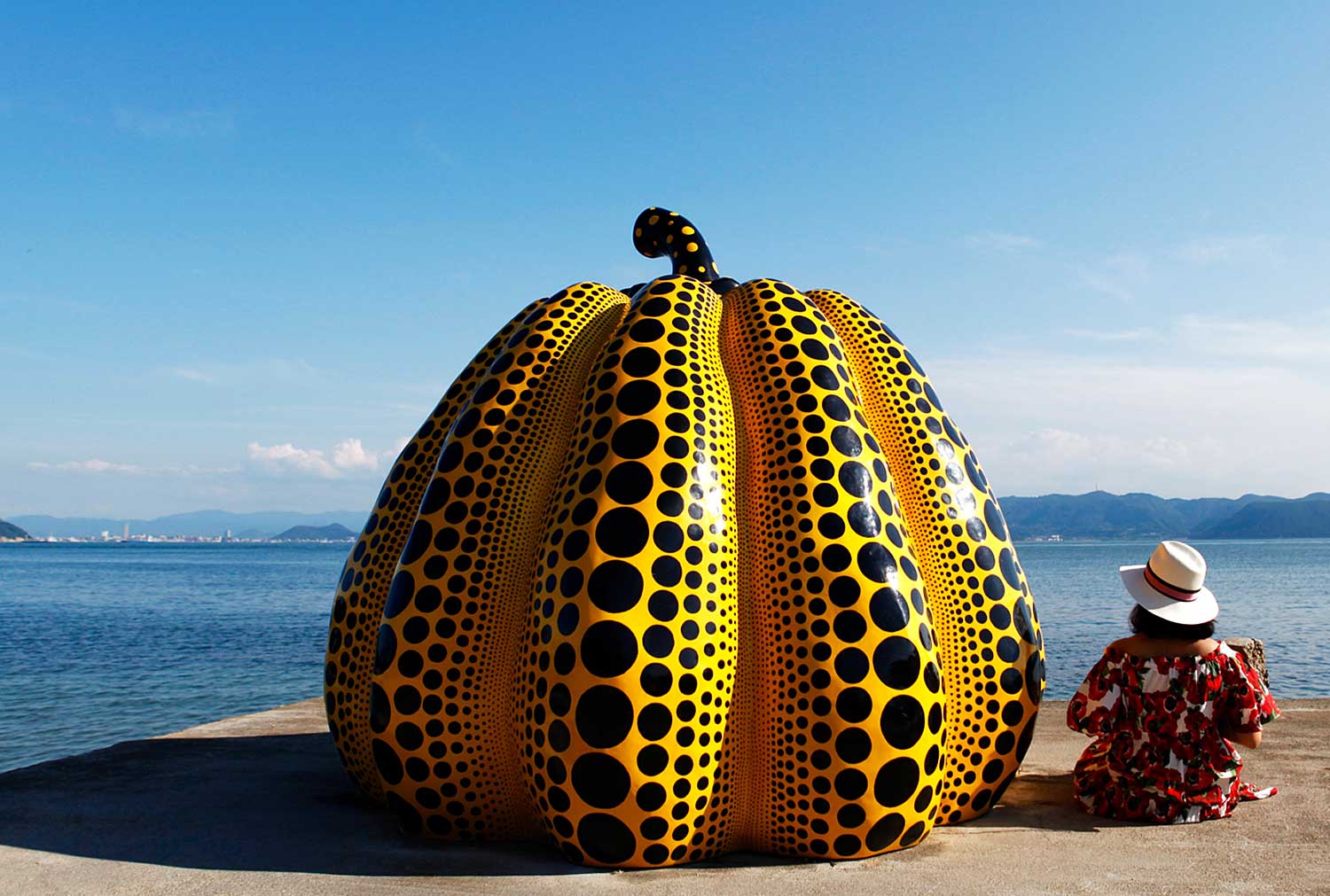 The yellow pumpkin with black polka dots is one of the art pieces on Naoshima Island in Kagawa prefecture. The small laid-back island covering 14.22km² became an art destination in the late 1980s, thanks to the billionaire businessman and philanthropist Soichiro Fukutake. He transformed the island to house contemporary art museums, galleries and outdoor sculptures. The Chichu Art Museum is a must see, with its impressive underground structure and exhibitions inside. Unfortunately, photos are not allowed inside and even outside the museum in order to encourage visitors to travel to the island and experience art through their own senses. Naoshima Island is also known for its high-quality salt. Sola Shio is the brand name of the island’s sun-dried salt product. In addition to sea salt for cooking, you may find sweets and drinks that have salty flavours like ice cream, doughnuts, candies and soda pop. I tried the ice cream and I liked it due to the creamy texture and the taste, which was creamy sweet, with a touch of saltiness. 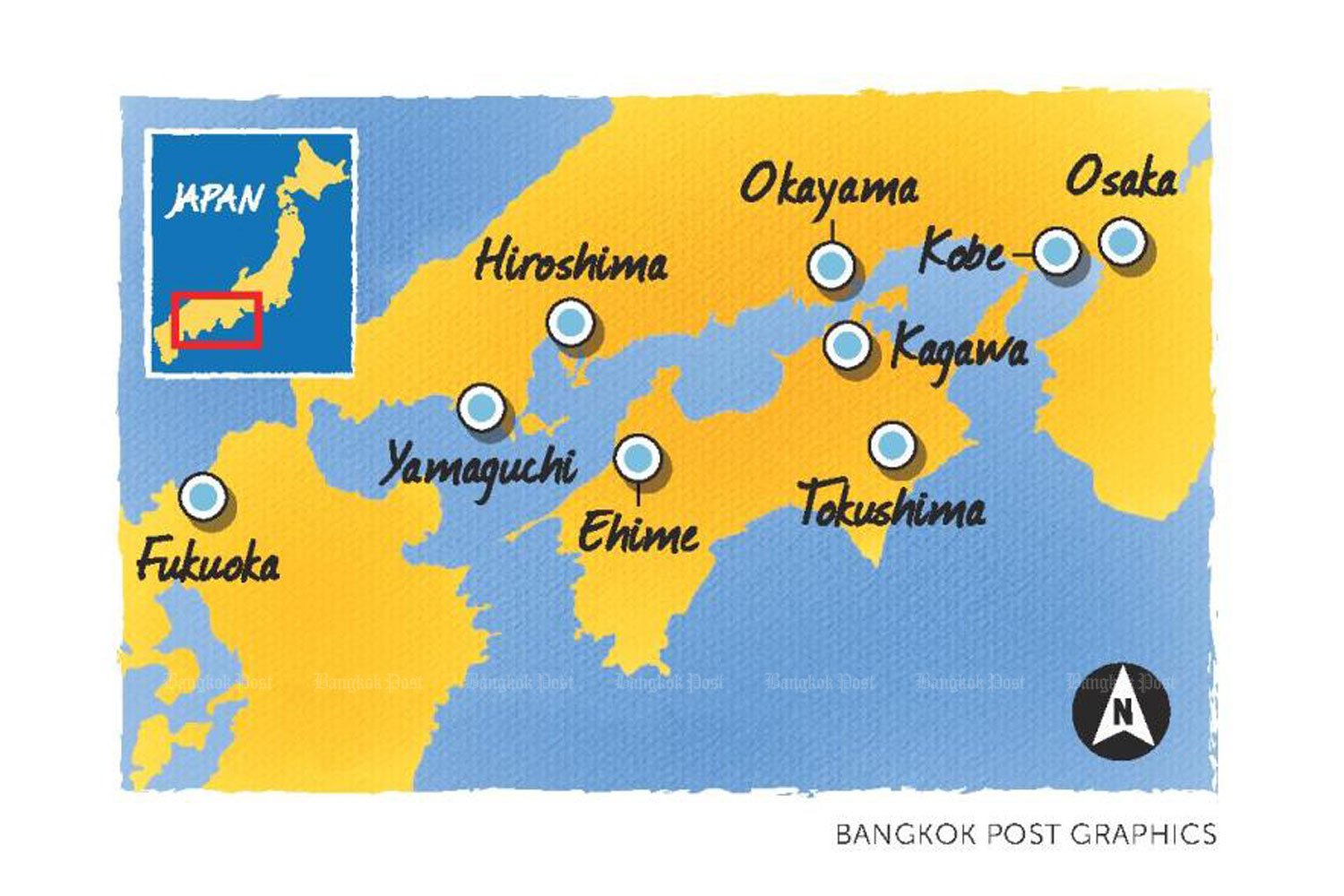