The art of the silent brew
Thailand
General

The art of the silent brew

The proof of a good cup of coffee is in how much it is enjoyed, not the conversations that are had over it. 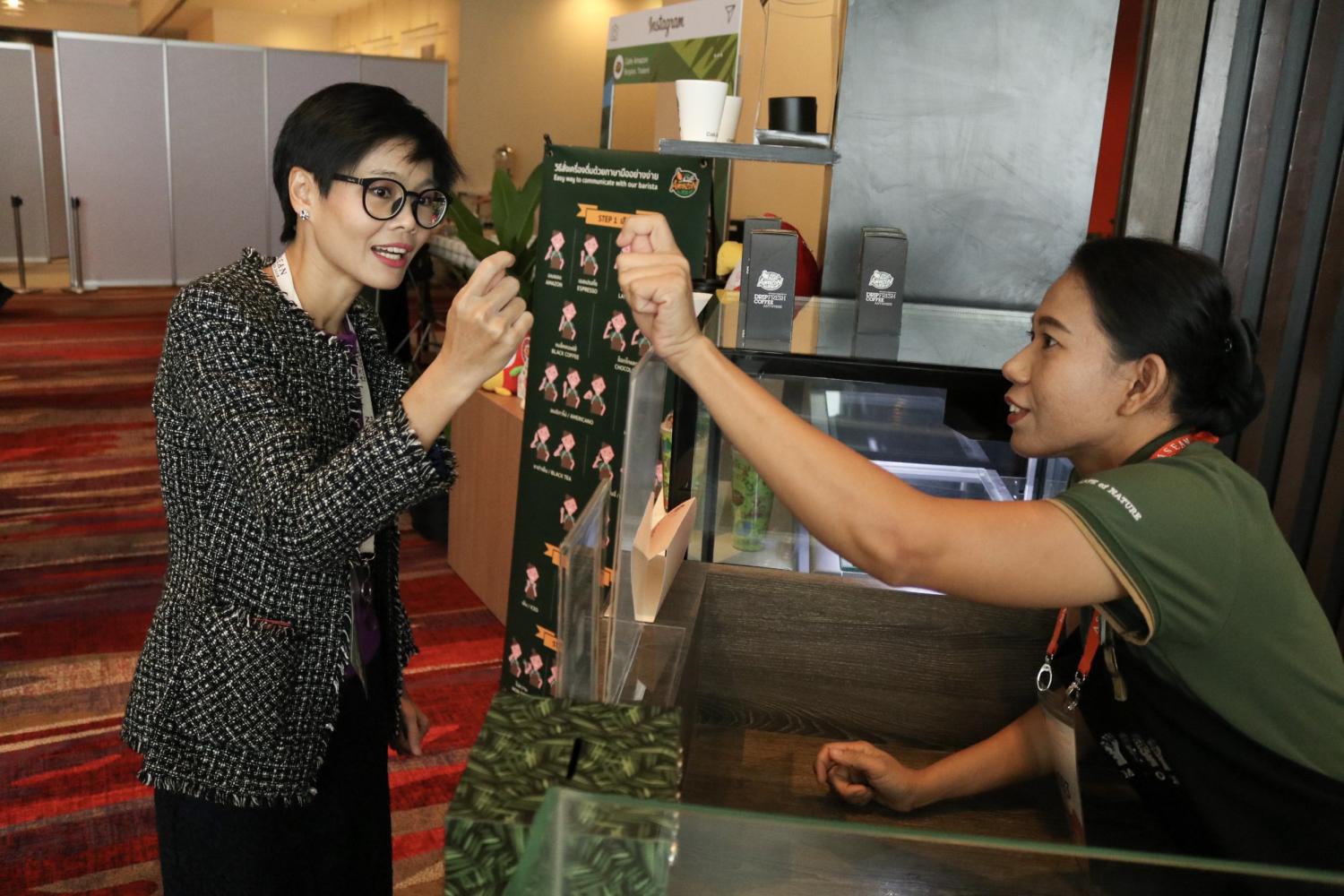 Customers read from an instruction chart and act out the sign language as they place their coffee orders with a hearing-impaired barista at the recent Asean meeting in Bangkok. photos by Tanyalux Watanapalin

Such is true of the brews served at a coffee shop which opened at the same venue in Bangkok as where the June Asean Summit and recent Asean foreign ministers meeting were held.

The staff who work at the shop are an example of what the 2030 Agenda for Sustainable Development Goals (2030 SGDs) is trying to achieve, a message which the Thai government is trying to hammer home.

The 2030 SGDs, which the United Nations adopted in 2015, champions the "no one left behind" motto and promotes human right to be free from poverty and hunger. 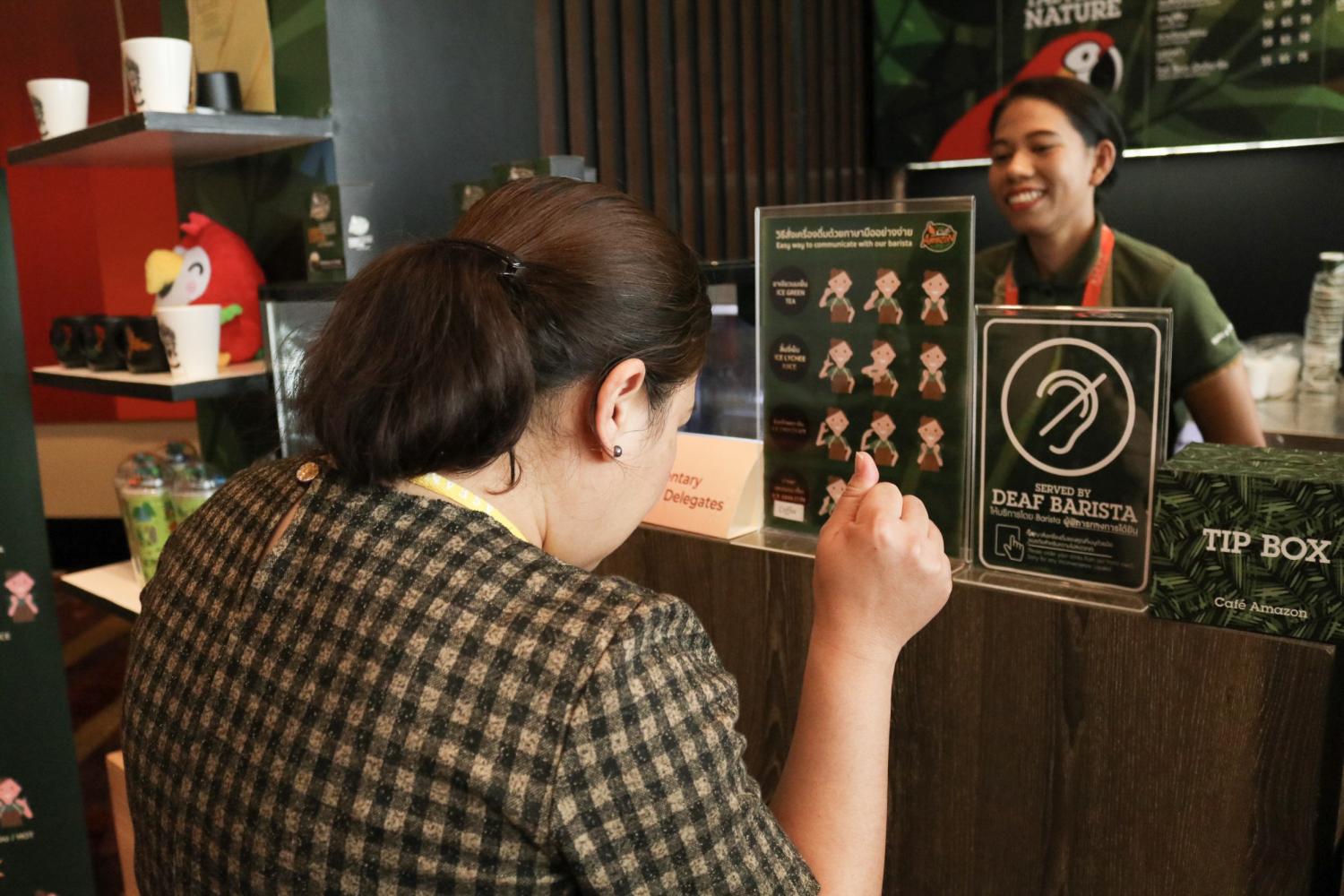 That catchphrase is also frequently repeated by the Thai government to the people and partner countries within Asean.

At the coffee shop, sponsored by the Cafe Amazon for Chance project, deaf baristas are exemplifying that message.

For those with hearing impairments, big breaks are a rarity. So when PTT Plc launched a project to teach deaf people the art of brewing under the Amazon Coffee brand, many jumped at the chance.

One of them is Panadda Kesorn, 30, from Pathum Thani. Life as a person with a disability in Thailand has not been kind to her, said Ms Panadda using sign language.

She lost her ability to hear at a young age and despite her struggles, Ms Panadda excelled in her studies. Ms Panadda, a graduate in deaf studies from Ratchasuda College of Mahidol University, said it was difficult to find employment with a sufficient income.

Then, a friend told her about the barista training programme. 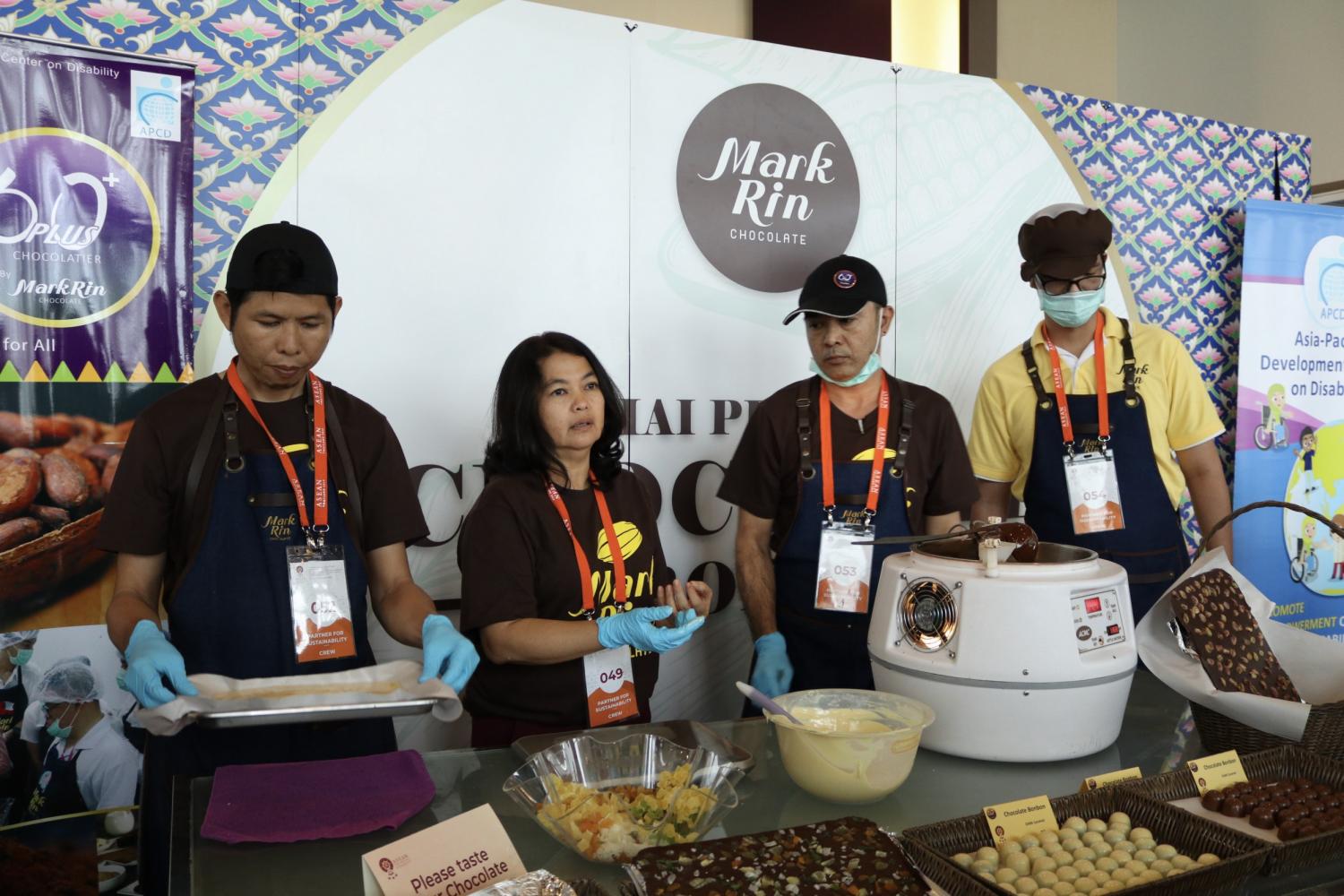 "I didn't have any second thoughts because I am fascinated by coffee. The salary for the job is also on par with the remuneration offered to able-bodied individuals," she said.

About 10 people signed up for the programme when it was first launched in 2018.

The theoretical portion of the coffee-making course lasted for about two months. Next came the practice segment, where the trainees were placed at various Amazon Coffee branches.

"Well, it was trial and error at the beginning. The more coffee I brewed, the more I became trained and I was able to clock up my experience," she said.

The baristas who worked at the coffee pop-up stations in front of the Asean meeting rooms and media centre agreed that the jobs they landed were a positive step toward a more equal society in which more disabled people have greater access to employment.

The law requires workplaces to employ people with disabilities. Blind people are often employed as hotline receptionists and deaf people often take up positions that do not require hearing.

Tharit Charungvat, a former ambassador in charge of the Foreign Ministry's Asean Operation 2019, said PTT Plc made the project a reality by providing vocational training to the deaf who now have a regular income, job security, and a career path.

The baristas who were trained in the programme graduated from Ratchasuda College, which was founded to educate people with disabilities under the patronage of HRH Princess Maha Chakri Sirindhorn, according to Mr Tharit.

At the coffee shop, the invisible barrier between the baristas and customers is broken down by the use of sign language. Customers are encouraged to communicate using a few easy-to-follow hand gestures to place orders for their favourite coffees.

A meeting participant, who did not want to be named, said she found it fun to speak with her hands to order coffee.

"At first, the signs I used were wrong. I had to be taught by the staff how to order … I tried several times and laughed," she said, adding that the laughter helped the staff and baristas feel less nervous and more relaxed. 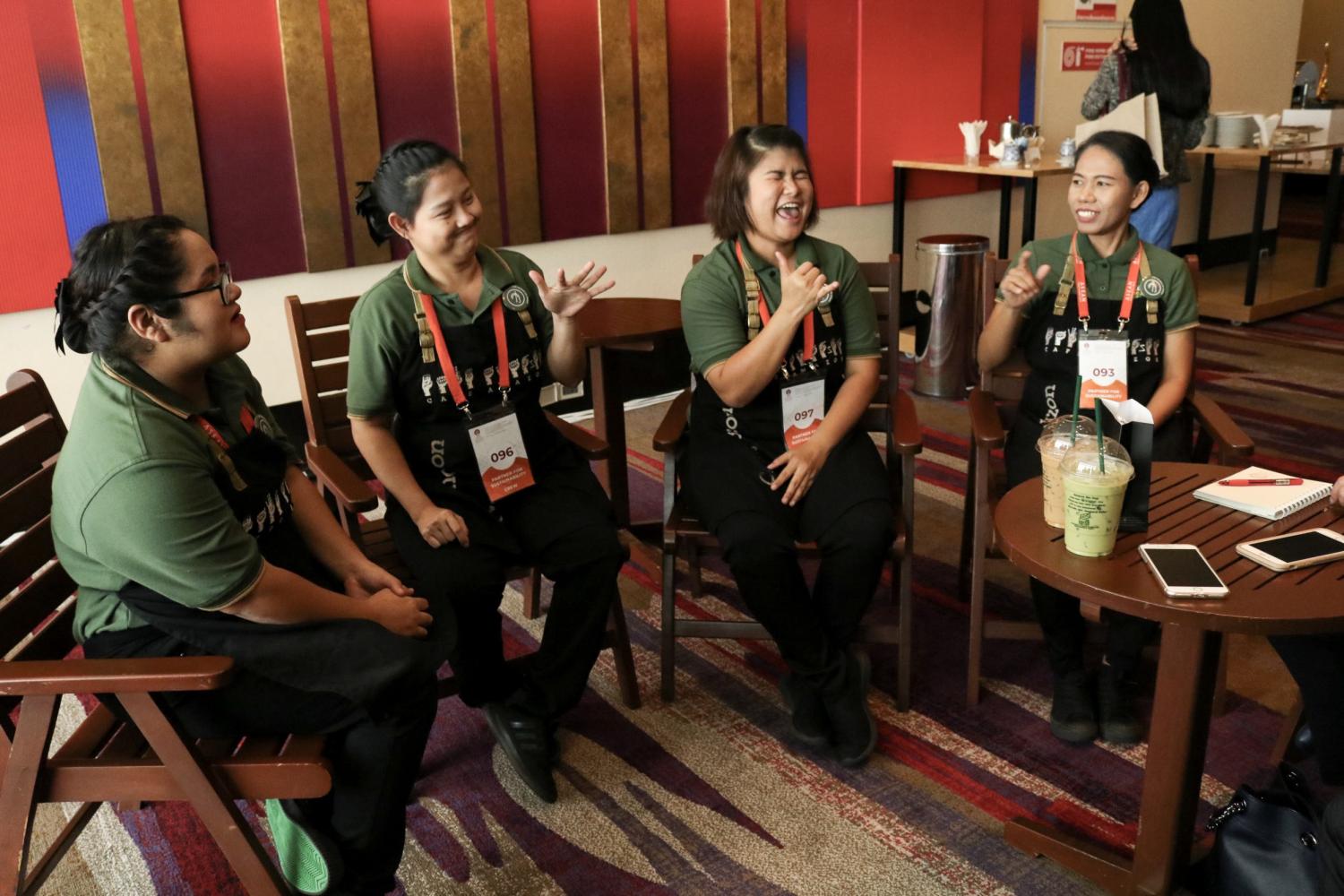 Deaf baristas explain their career paths and how they were driven to become baristas.

The baristas, in particular, appeared to be at ease while communicating with the customers.

"The customers were all smiles as they ordered coffees and drinks. That was a happy moment," she said.

Onanong Insen, 33, from Prachuap Khiri Khan, said she was excited to fix coffee for delegates and participants at the Asean meeting. It gave her an opportunity to meet foreign visitors and communicate with them.

Ms Onanong said her life is beginning to settle now that she has a suitable and steady job. "I was rejected by several companies on account of me being deaf and despite repeatedly assuring them of my ability and willingness to work," she said.

She added that she wanted to spread the word about the chance that she received from the PTT Plc-supported project. She hopes that more disabled people can secure jobs to become independent and take care of their families.

The regional meetings, with Thailand currently holding the chairmanship of the Asean bloc, also served the delegates with chocolates that are produced by deaf people who underwent special training. The chocolate training involved a collaboration between the Asia-Pacific Development Centre for Disabilities and the Mark Rin Chocolate company based in Chiang Mai. The project is meant to promote employment of disabled people in the food industry.

The 60 Plus Bakery and Cafe on Rajavithi Road in Bangkok is another establishment that hires disabled people and trains them to bake. It's part of a series of vocational and income-generating initiatives established to commemorate HRH Princess Maha Chakri Sirindhorn on her 60th birthday in 2015.

Thailand has initiated ideas to comply with the SGD goals in various forms, including this year's theme of "Advancing Partnership for Sustainability".

The regional grouping organised its meetings with the goal of giving opportunities to disabled people to have a role in the events, which helps to meet the "no one left behind" goal.

The meetings have also proceeded with "green" objectives in mind.

"We hosted around 180 meetings with 10,000 or so participants this year. So, the three-Rs concept -- reduce, reuse, recycle -- was applied at all meetings," said Mr Tharit.

The media kits and bags distributed to the delegations were produced by disabled people and craftsmen in the local communities, while the passport covers and bag badges were handmade by local ethnic groups in Chiang Rai.

The Asean delegation and dialogue partners also see the blind ladies sewing sashiko needle works or a form of an ancient Japanese embroidery. Sashiko is suitable for blind people because it is a stitching art that can be done in the dark, according to Mr Tharit.

Fresh coffee, tasty chocolate and handicrafts, which are products of disabled people's labour, will again be made available at the upcoming second Asean Summit and related meetings scheduled for November.