With or without coconut milk, gaeng dishes remain popular and delicious

Yam dishes are very adaptable -- prepared by mixing together meat and/or vegetables to form a kind of salad. The pounded food including all kinds of nam prik is called tam. Papaya salad may look and taste like a yam dish but it is a tam food as implied by its name som tam.

The tom (boiled dishes) and gaeng (curries) are rather confusing. There is no distinct difference between the two types. Some have a wrong perception that the tom dish doesn't use coconut milk while gaeng is a coconut milk-based curry.

It is too complicated to make a clear-cut distinction. For example, tom yam goong with coconut cream is not called gaeng, but tom yam nam kon, while a soup-like boiled vermicelli with minced pork, coriander, made without coconut cream, is called gaeng jued woon sen moo sap.

Many gaeng dishes are made without coconut cream. Thus tom or gaeng reflects no division between the two. It is just called the way it has always been.

Among the gaeng dishes, gaeng pa, made without coconut, stands out from its peers. The word pa in this context has nothing to do with ahan pa (jungle food). gaeng pa is not jungle food as it does not involve ingredients retrieved from the forest. It merely suggests a simple dish containing spicy and salty flavours. 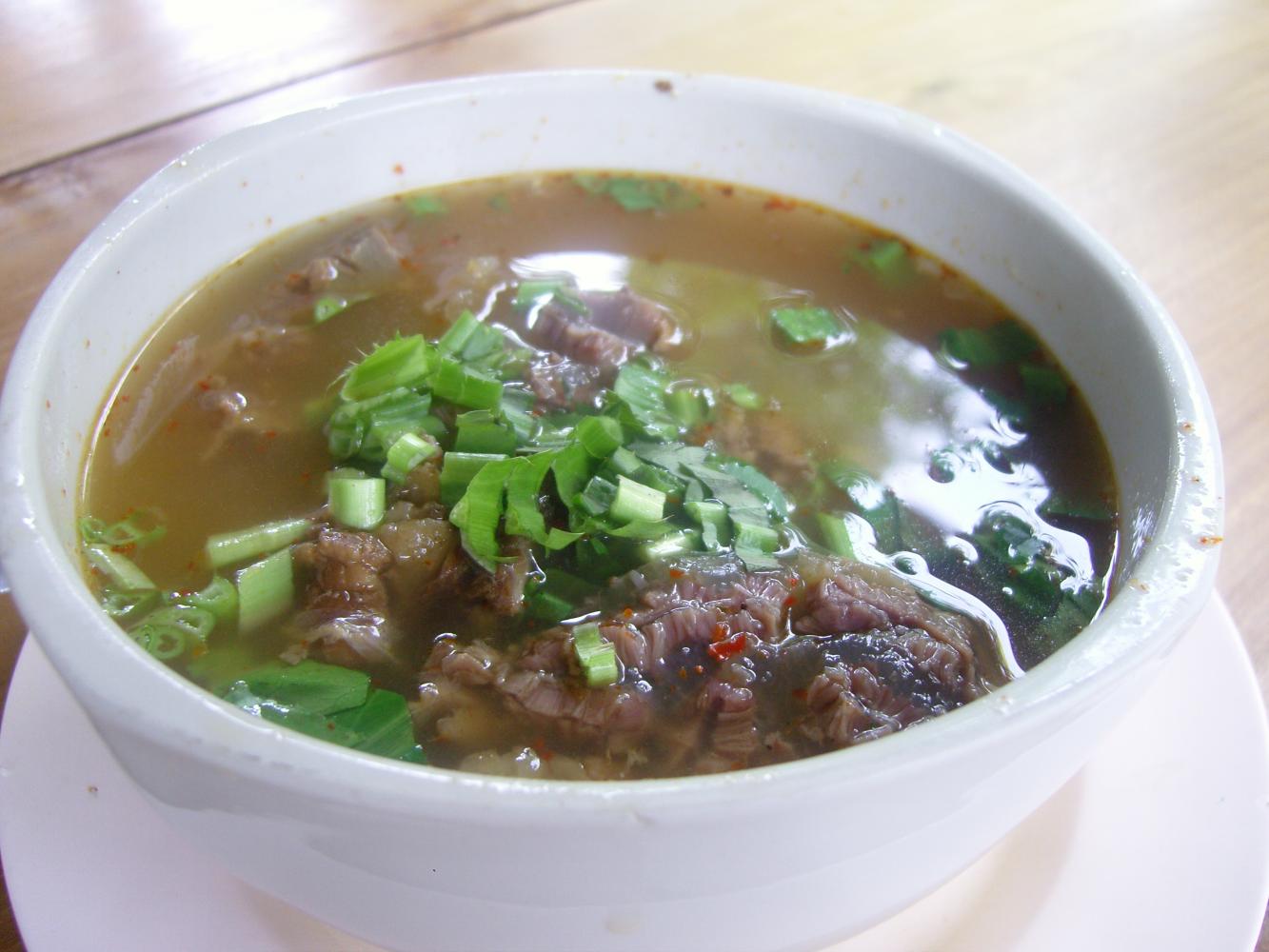 Ahan pa is a basic Thai cuisine originated naturally from a simple lifestyle of rural people whose livelihood was closely connected to the forest. In the past, they went for days into the jungle to hunt animals or look for spices and herbs for sale to buyers outside of the local community. During the journey they had to pack light, carrying some rice, salt and dried chillies. Meat and vegetables were acquired in the forest. They adapted food preparation to the wild conditions. Rice was cooked in bamboo trunks. Big leaves were used as a container. Meat was prepared as simply as possible, boiled with vegetables seasoned with salt and chillies only.

Another ahan pa came from the impromptu cooking of alcohol drinkers. Sometimes, those people got together to drink outside the house, in the rice fields or by the pond. A little bit drunk, they did not fuss about food. They cooked anything they caught -- be it snake, bird, eel or frogs. The meat was either boiled or stir-fried with a lot of chillies, galangal, lemongrass, kaffir leaves, sweet basil and seasoned with salt. The dish has evolved through time and became so common that it does not contain ingredients harvested from the forest. It is simply an easy-to-cook dish with an intensely spicy, hot and salty taste.

An alternative approach, tom nuea pa was cooked using dried chillies and seasoned to taste with tamarind, fish sauce and sweet basil. Gaeng pa has subsequently been adapted to include different kinds of meat and catfish, which is an ideal meat for cooking the dish. To make gaeng pa pladuk, first a curry paste is prepared by pounding a mixture of dried chillies, galangal, lemongrass, kaffir rind, onion, garlic and shrimp paste. Then add aromatic rhizome (krachai), kaffir lime leaves and sweet basil. The finished curry is seasoned to taste with nam pla (fish sauce). The aromatic rhizome is added to minimise the fishy smell of catfish.

Talking about fish, it is funny that people living near the sea feel that freshwater fish has a muddy smell while those living by the river think marine fish has a strong fishy odour.

In summer, Thai people like to escape the heat and head to the beach. It is also a good time to enjoy a variety of seafood, including steamed crabs, steamed mussels, deep-fried Spanish mackerel with fish sauce, deep-fried sea bass with sweet and sour sauce and most notably, gaeng pa pladuk talay (salt water catfish curry made without coconut cream). 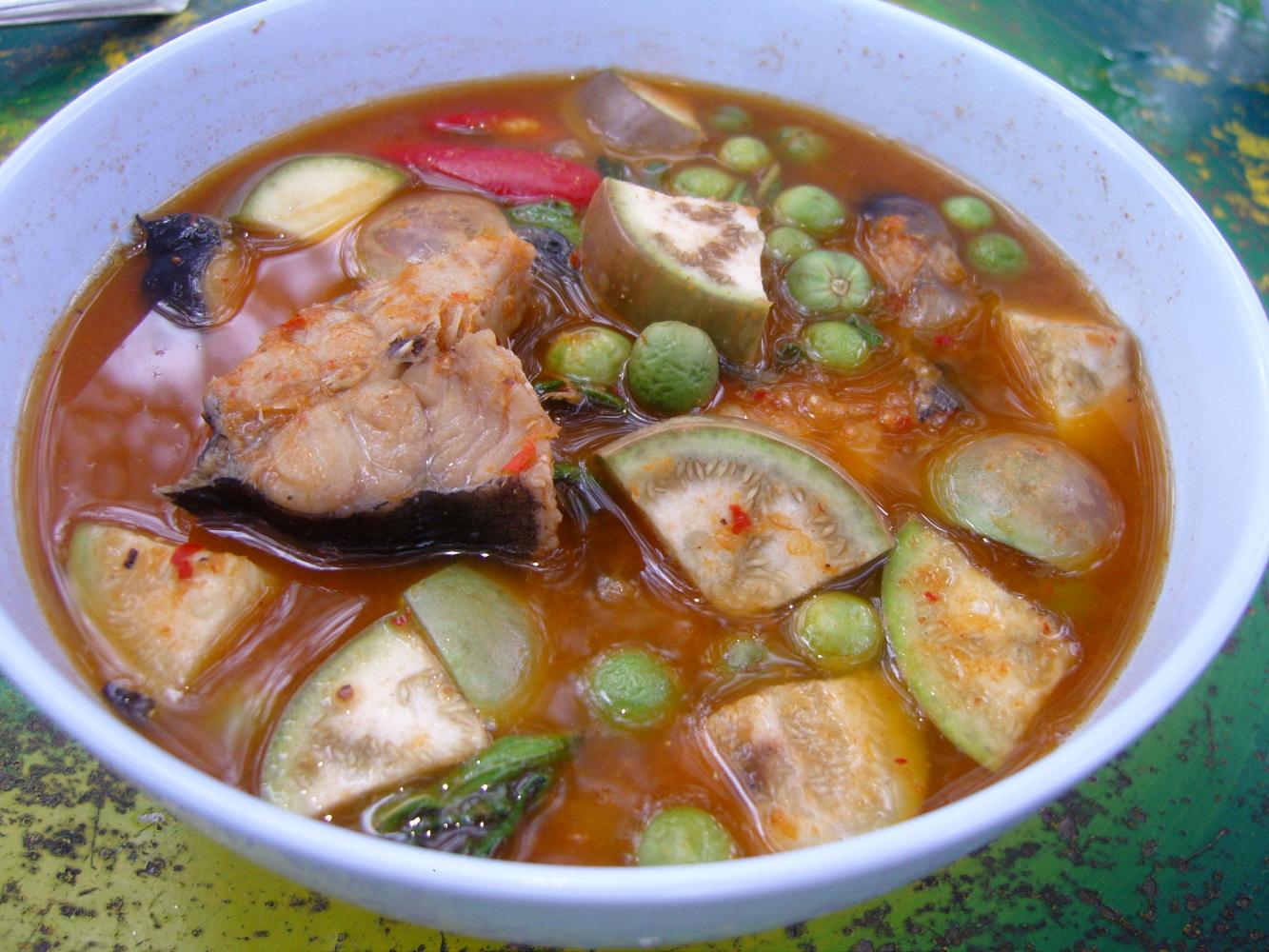 There are many ways to cook pladuk talay. However, it usually starts with preparing a curry paste by pounding a lot of dried chillies, galangal, lemongrass, onion, garlic, kaffir lime rind and fresh coriander root. The paste is then fried until fragrant. Then some water is added and when it comes to boil, put in the sliced fish, string bean, pea eggplant, eggplant, aromatic rhizome, kaffir lime leaves, mint and sweet basil. Finally fish sauce is added to attain its salty taste.

Some restaurants in Chanthaburi, where pepper and other kinds of herbs are abundant, add young peppercorns and fried dried chillies. A use of mixed herbs helps mask the strong odour of saltwater catfish.

On the contrary, Huay Tha Chang village in Nong Ya Plong district on the western side of Phetchaburi, which is far from the sea but close to the jungle, has its own version of gaeng pa. Wild boar meat is cooked using the same curry paste with an addition of ma kwaen. And eggplant as a sole vegetable is put in the curry.

With a highly adaptable recipe, easy to cook and a good compliment to other dishes, gaeng pa has become a main dish offered in restaurants and extensively cooked in households.