No helmet? No problem

It isn’t just in Thai boxing where the lives and limbs of young Thais are at risk daily. Thai teens are even more at a threat of suffering severe injuries, or dying, on the country’s roads. These roads can turn into veritable slaughterhouses during certain periods such as the Songkran holiday with its freewheeling atmosphere and widespread drunkenness.

According to the Global Status Report on Road Safety 2018 by the World Health Organization (WHO), Thailand’s roads remain among the deadliest in the world. The country’s traffic death rate per 100,000 people was at 32.7 in 2016, which makes Thai roads the deadliest within ASEAN where the average rate is 20.7 deaths per 100,000.

As many as 22,491 Thais die in road accidents each year on average around the country. That appalling death toll makes the country’s traffic-related mortality rate the eighth deadliest in the world out of 175 countries surveyed by the WHO. Globally, only Venezuela and six African nations have roads with higher death rates, including Liberia, Saint Lucia, Burundi, and Zimbabwe. Many of the victims of road accidents in Thailand are youths in their teens and twenties who die or get severely injured in motorcycle accidents, usually while wearing no helmet. They wear no helmet despite the use of this protective gear being prescribed by law.

Thai traffic police tend to turn a blind eye to all such infractions. Their negligence serves as an incentive to motorists to break the law and risk lives in the process, including their own. “If you can easily get away with breaking the law, why bother about keeping it?” the thinking goes. In fact, many police officers themselves break the law by driving on sidewalks, often without a helmet.

Partly as a result, Thailand, where millions of people own firearms either legally or illegally, also has one of the highest rates of gun-related homicides in Asia. According to recent estimates, up to 4.45 people per 100,000 are shot dead each year in the country, which is the same rate as in the United States and several times higher than the rates in neighbouring countries like Cambodia and Malaysia. 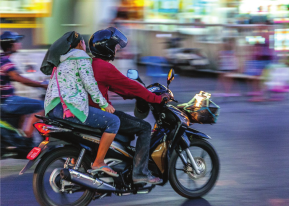 Most gun-related murders are committed during criminal activities like robberies or are crimes of passion with jilted lovers taking revenge by shooting their ex-partner dead. Trigger-happy citizens, including some police officers, often resolve verbal altercations by reaching for their guns.

Troublingly, endless internecine turf wars between students of various vocational schools around the capital also take their toll on young lives. Each year several students are gunned down or stabbed to death by their peers for no obvious reason other than that they go to a different school. Within schools, meanwhile, violence often takes the form of hazing.