On Nov 1, Hello Kitty turns 45. But despite her advancement into middle-age, the enormously popular cat/girl character remains as youthful and cute as ever.

Since 1980, Kitty has celebrated her birthday with Yuko Yamaguchi, the designer behind the adorable looks that make her the queen of kawaii ("cute" in Japanese).

Ahead of the big birthday bash, Yamaguchi was in Bangkok recently for the "Central | ZEN Sanrio Fair 2019" and the launch of the Hello Kitty 45th anniversary collection at CentralPlaza Lardprao.

"We share the same blood type, A, and I'm also a Scorpio," Yamaguchi said of her similarity with the world-famous character, who, by the way, is not a cat.

Some of us could be forgiven for making that mistake. After all, with her whiskers and pointed ears, Kitty does look rather like a cat. However, Sanrio, the Japanese company behind Hello Kitty since she was first introduced in 1974, insists that she is -- and has always been -- a British schoolgirl called Kitty White. 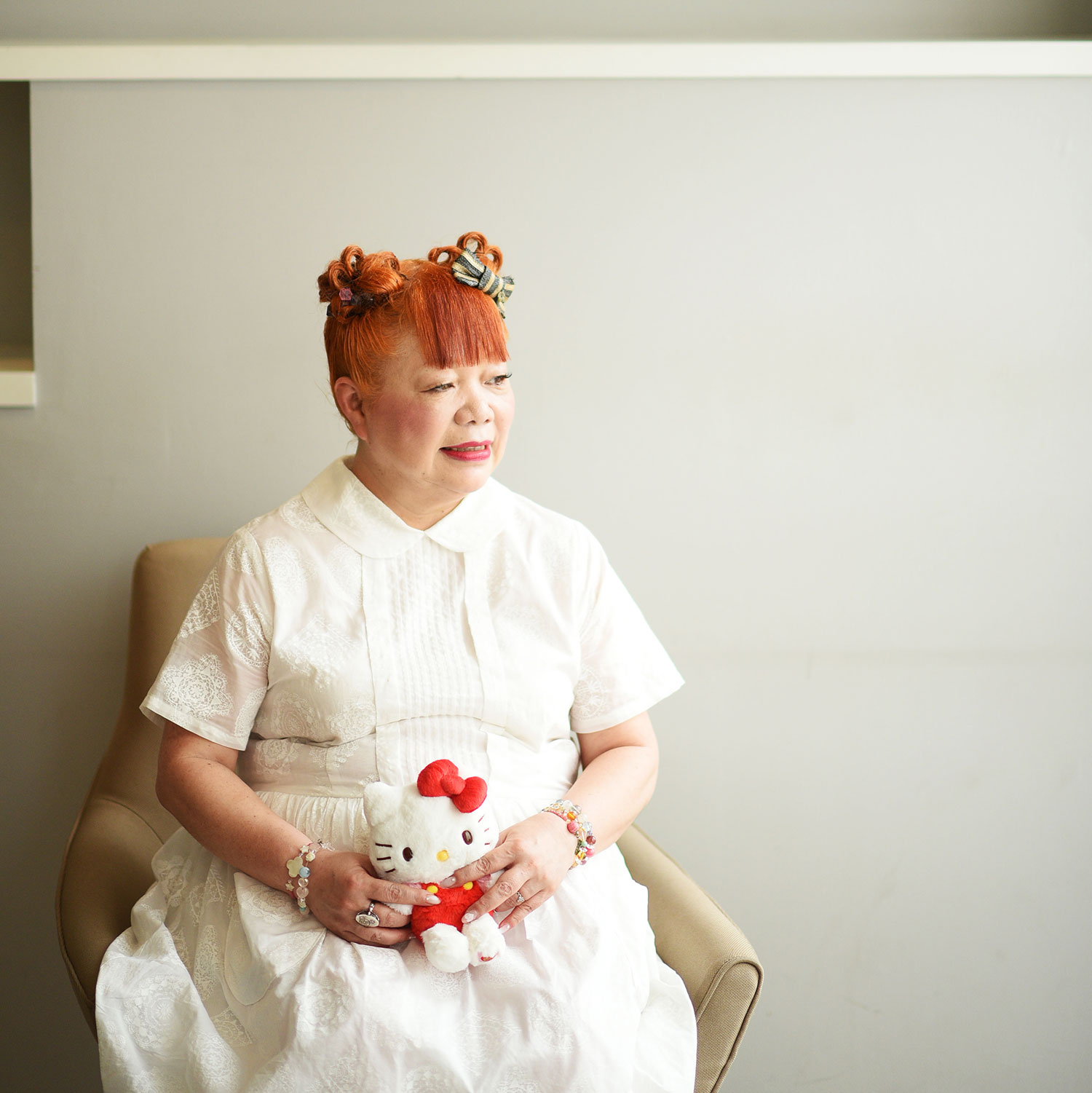 The issue remains controversial among fans of the character. But Sanrio is doubling down. To back up their position, they point to Ano Ko Wa Kitty, a novelty song released in 1977 whose title translates as "that little girl is Kitty". They also point out that the character has a pet cat who purrs and walks on all-fours named Charmmy Kitty. Kitty herself walks upright.

"We personified the character as a warm, bright and kindhearted girl. My job is to give life to the affable character through designs that show her different facets," said Yamaguchi.

The original character wears a red bow on the right ear. A recent redesign in Hello Kitty London features a Union Jack bow worn in the centre of her head to represent her "roots".

According to Sanrio, Kitty and her family were designed as Londoners because, in the 1970s, the idea of the quintessential British lifestyle was extremely popular among Japanese girls.

She has a twin sister Mimmy, recognisable by the yellow bow on her left ear. They are also best friends, and of the same height, measuring five apples. Kitty weighs around the same as three apples. Unless, that is, she eats too much of the apple pie baked by her mother Mama. 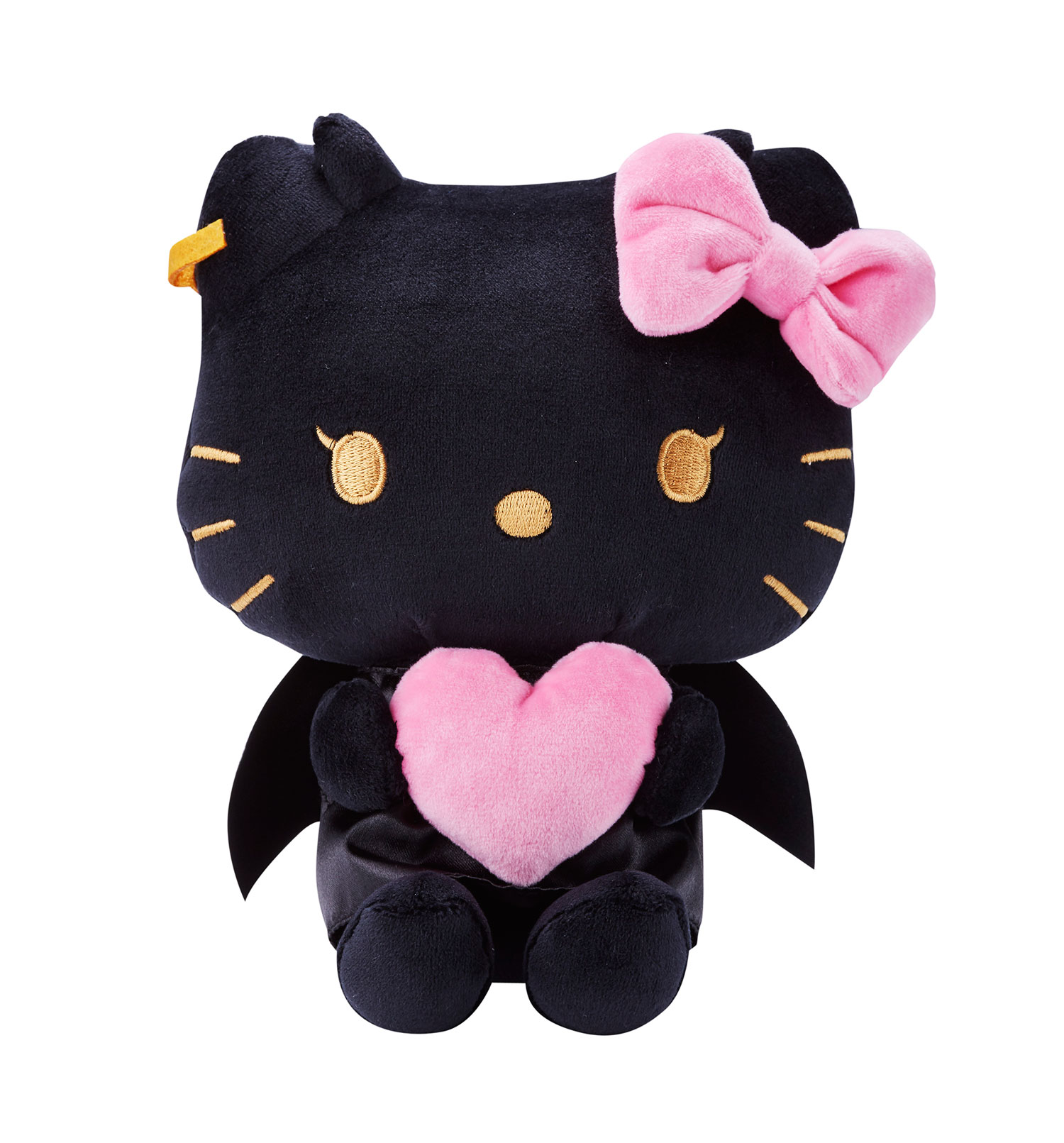 Beyond this, Sanrio provides little background about its most popular character. As a result, people are always asking Yamaguchi questions to discover more about Kitty-san.

"No, she's always a good girl and friendly to everyone," said the Japanese designer.

What about Hello Kitty Devil? She's black and has a Dracula-like cape. But she has a pink bow and heart that cancel out the dark side.

Hello Kitty merchandise comes in all manner of forms. It started with the vinyl coin purse launched in 1975. Now, the plush dolls are the most common, but there are many other products to choose from.

By the late 1970s, however, sales of Hello Kitty products weren't doing so well. This led to the appointment of Yamaguchi as the third chief designer in 1980. She quickly turned things around and Sanrio and Kitty haven't looked back since.

Yamaguchi joined Sanrio having graduated from Joshibi University of Art and Design, and initially worked in non-character design such as patterns and logos.

Wallets from the 45th anniversary collection.

As Hello Kitty designer, she continued to sketch the character with clean lines and created versions without the black outline.

Her successful approach then incorporated storytelling, adding characters to create a world full of love and friendship. Kitty's boyfriend Dear Daniel and her pet Persian cat Charmmy Kitty made their debuts in 1999 and 2004, respectively.

Yamaguchi regularly meets with Hello Kitty fans worldwide in order to hear their suggestions and feedback to help her evolve the character. At Sanrio stores around the world, she draws, signs and distributes pictures of the beloved character to fans.

"This is the best part of the job, since I get to travel a lot both in Japan and abroad. It's rewarding to see the love that people have for Kitty White, who's an idol and a symbol of friendship," she said. "I would ask ideas of the next designs. This is one of the reasons that Kitty continues to appeal, as we respond to requests from the fan club."

The 45th anniversary collection features plush Hello Kitty dolls in a range of guises; she is depicted as an angel, as a fairy, flying a yellow aeroplane and riding a blue dolphin.

Besides the official Sanrio merchandise, the character can be seen emblazoned on all manner of diverse products, following partnerships with leading brands. Current collaborations include those with Converse, Herschel, Levi's, Moleskin and OPI.

Yamaguchi has been actively in volved in these collaborations, resulting in products that have widened Hello Kitty's appeal to people of all ages.

What else would she like to see the versatile Kitty do?

Earlier this year, Sanrio granted rights to Warner Bros' New Line Cinema and Flynn Pictures to develop the character's first English-language feature film. Yamaguchi didn't actually mention the movie project but said that she would like to see Kitty as an entertainer singing English songs.

Can she do that without a mouth?

Yamaguchi explained that mouthless design doesn't mean that Kitty can't speak or sing. The lack of a mouth is done to portray an expressionless face. This way, Kitty reflects the mood of the person looking at her. This makes her empathetic, looking happy or sad when people feel that way. No doubt this is a huge aspect of her enduring popularity.

On the character turning 45, Yamaguchi said: "Age is just a number for Kitty, who is not subject to the ageing process. I cannot imagine a middle-aged Kitty. She will remain young and cute, with a positive outlook on life."

The "Central | ZEN Sanrio Fair 2019" runs at CentralPlaza Lardprao until Oct 16. Thereafter, it will travel to other Central shopping plazas in Bangkok.