Nongluck Chao got the shock of her life when her daughter made a frantic phone call saying she was molested. At that time, her daughter was just 12 years old.

It was 3pm. Her daughter was walking home from school, taking her usual route -- an empty walkway alongside a Bangkok canal. A man was walking from the other direction, and when they crossed paths, he began to put his hand on the front part of her body. The young girl resisted, hitting him with her bag. Fortunately, she got away.

"When I returned home, my daughter was frightened. She held me tight. Then, she asked me to take her to the police, saying she didn't want her friends to experience it. And if the bad guy is still around, my daughter was afraid he'd come back. If we tell the police, maybe they can lock him up," said Nongluck to a room full of 50 volunteers who recently gathered to make our streets safer as part of the Safe Cities for Women initiative.

"I've had my own bad experience, too, like with people touching my breasts or trying to get a peak when I used the public toilet. But it never felt as bad as that phone call from my daughter," she said. 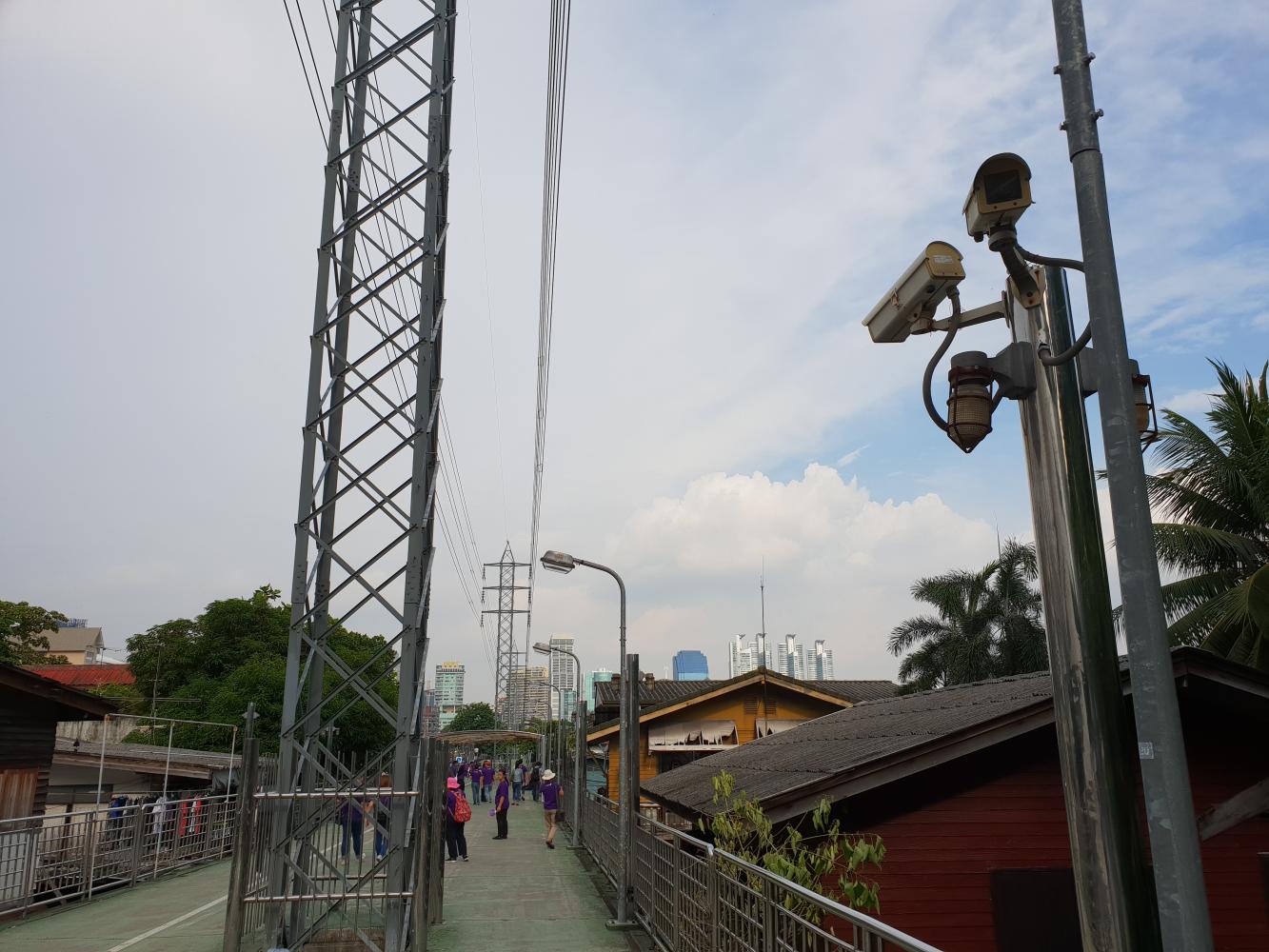 The green skywalk links Lumpini and Benjakitti parks. It is popular among runners. Melalin Mahavongtrakul

Eventually, the police were able to apprehend the perpetrator, and it was found out that he has a record of a similar crime against a 10-year-old child in another province. He is now in jail. But the incident deeply impacted Nongluck's daughter.

"At first, she wouldn't walk near that zone at all. But after we went to see a psychologist, she got better and was able to walk that same route again. She still uses that same walkway today," Nongluck said.

Nongluck's daughter is not the first victim of street harassment, nor is she the last. ActionAid, an international NGO against poverty and injustice, has found that one in three women around the world has experienced sexual harassment on the streets of big cities. 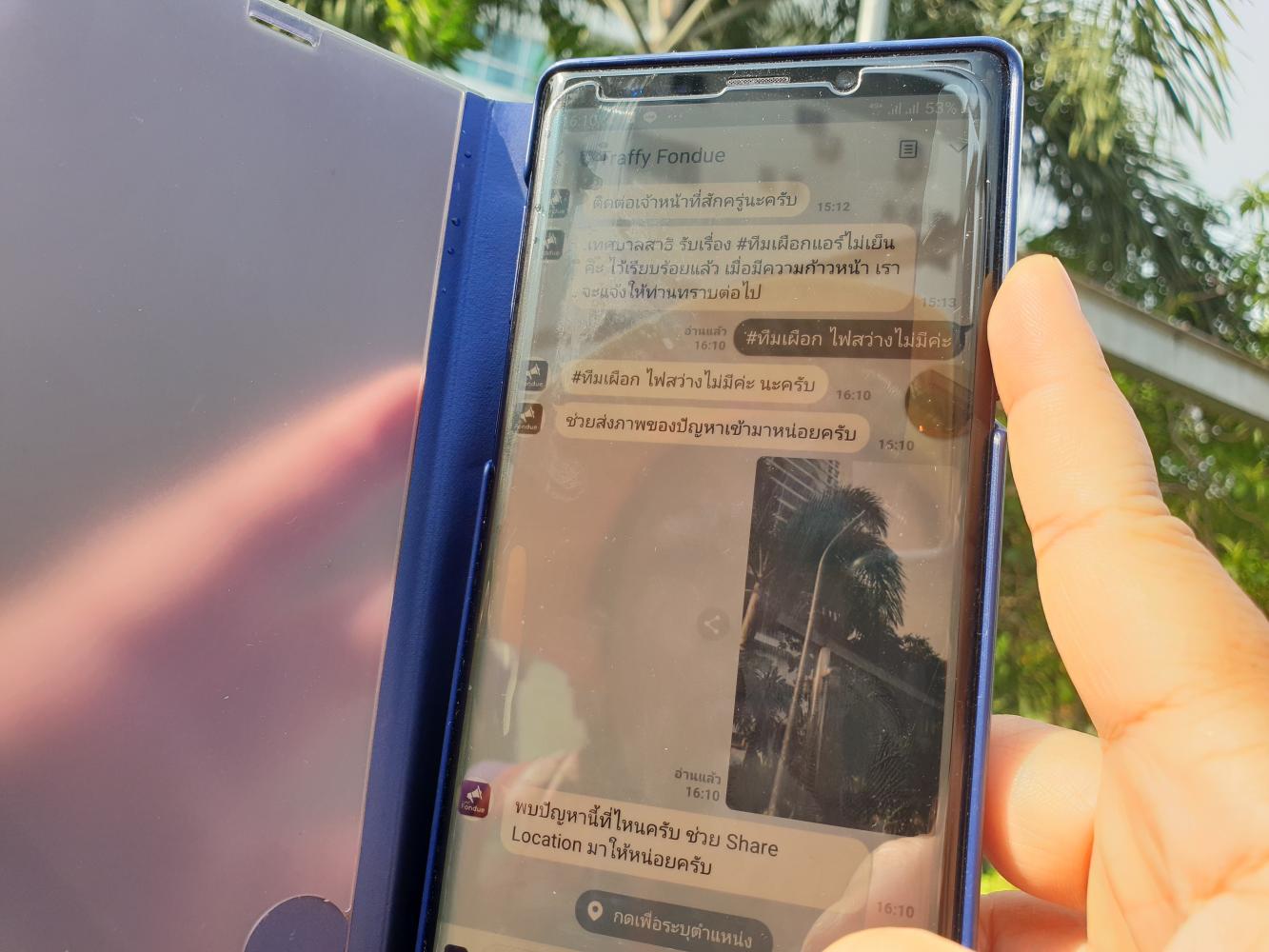 Dark corners. Deserted alleyway. Lack of security camera and even light. The streets and public areas of Bangkok in many zones are unfortunately unsafe. ActionAid reported that 86% of women in Thailand have experienced street harassment. 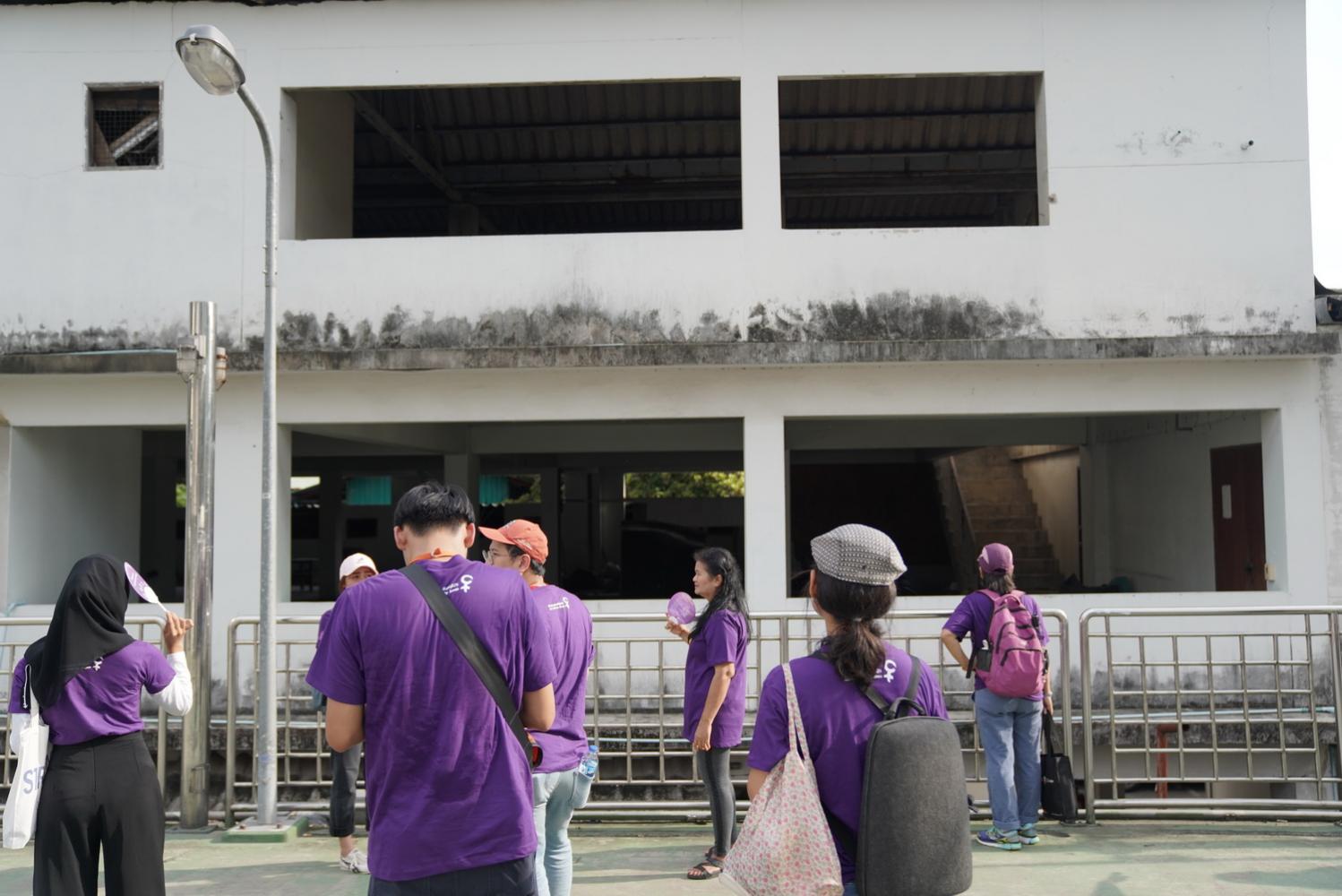 Previously, Safe Cities has done projects to advocate for women's safety on public transport. They asked the public to pueak -- colloquially, to "butt in", or to keep an eye out for one another and to step in when they witness sexual harassment.

The First Pin campaign now utilised crowdsourcing through the official account Traffy Fondue on Line. Using #teampueak, people can now send photos and report locations of unsafe spots around Thailand through the account's chatbot, where data will be collected and passed on to the relevant authorities for improvement.

"Many women have faced street harassment. This problem affects a lot of people, but it is often overlooked. Harassment comes in many forms: ogling, touching, catcalling, stalking, showing one's genitals. Some think it's not a big problem, that it's just bad luck," said Varaporn Chamsanit, from the Women Wellbeing programme. "But these incidents make people paranoid and feel unsafe in their own cities. Some avoid certain areas altogether, which becomes a problem as they still have to go about their daily life." 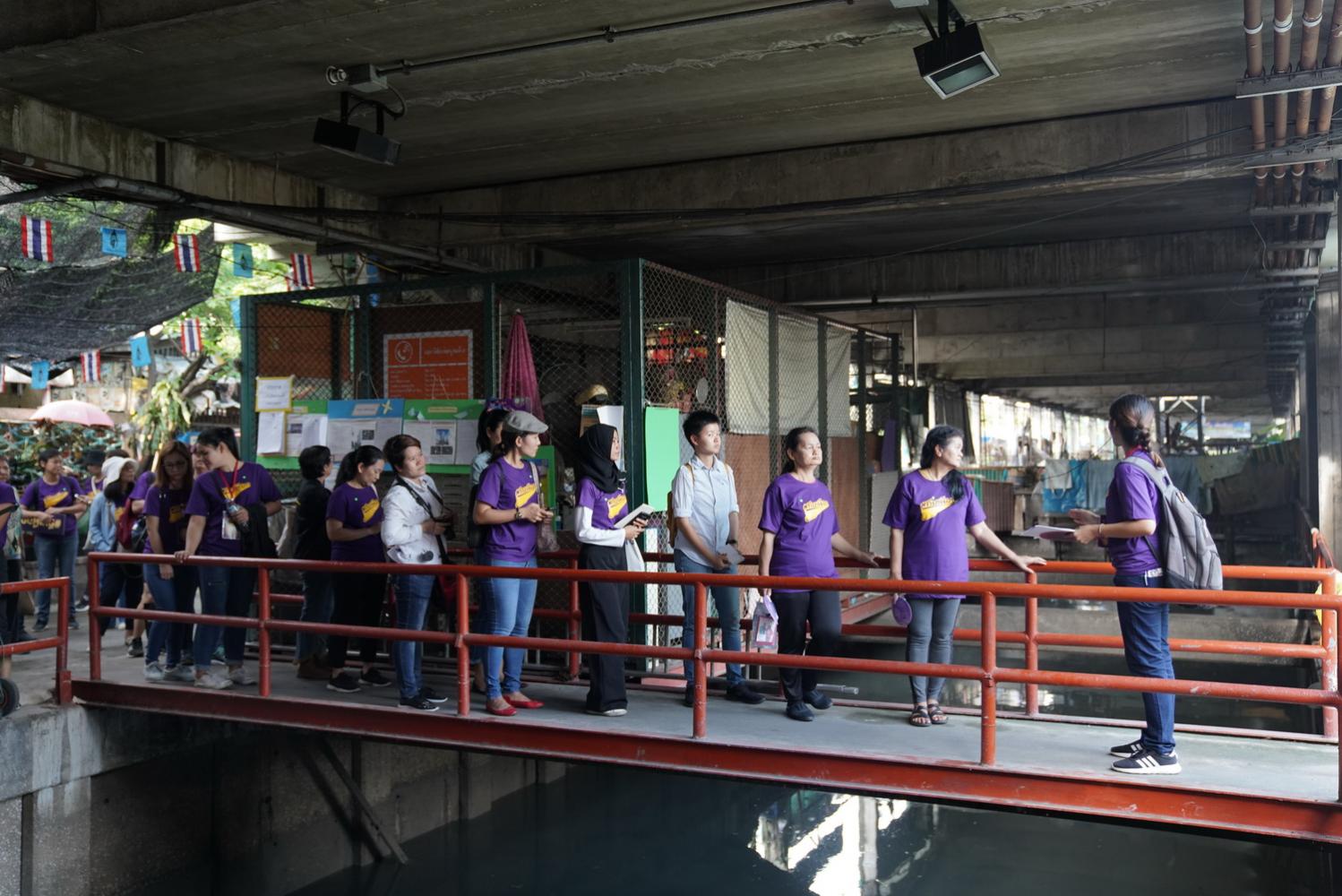 With this campaign, Varaporn said they're trying to get the public involved as much as possible, adding that the state doesn't have enough manpower to deal with the issue.

For the campaign's pilot run, Safe Cities brought its group of volunteers through the Ruamrudee community and on the overhead green skywalk that connects Lumpini and Benjakitti parks. Most of the volunteers were women who signed up on Safe Cities' Facebook page. Some of them were victims of street harassment. Some were members of the Ruamrudee community. They all had their phones out, ready to identify and snap unsafe spots along the way. These risky places include, but are not limited to, streets with dead ends, deserted areas, and places that are not well lit, far from public transportation and with no security guards. 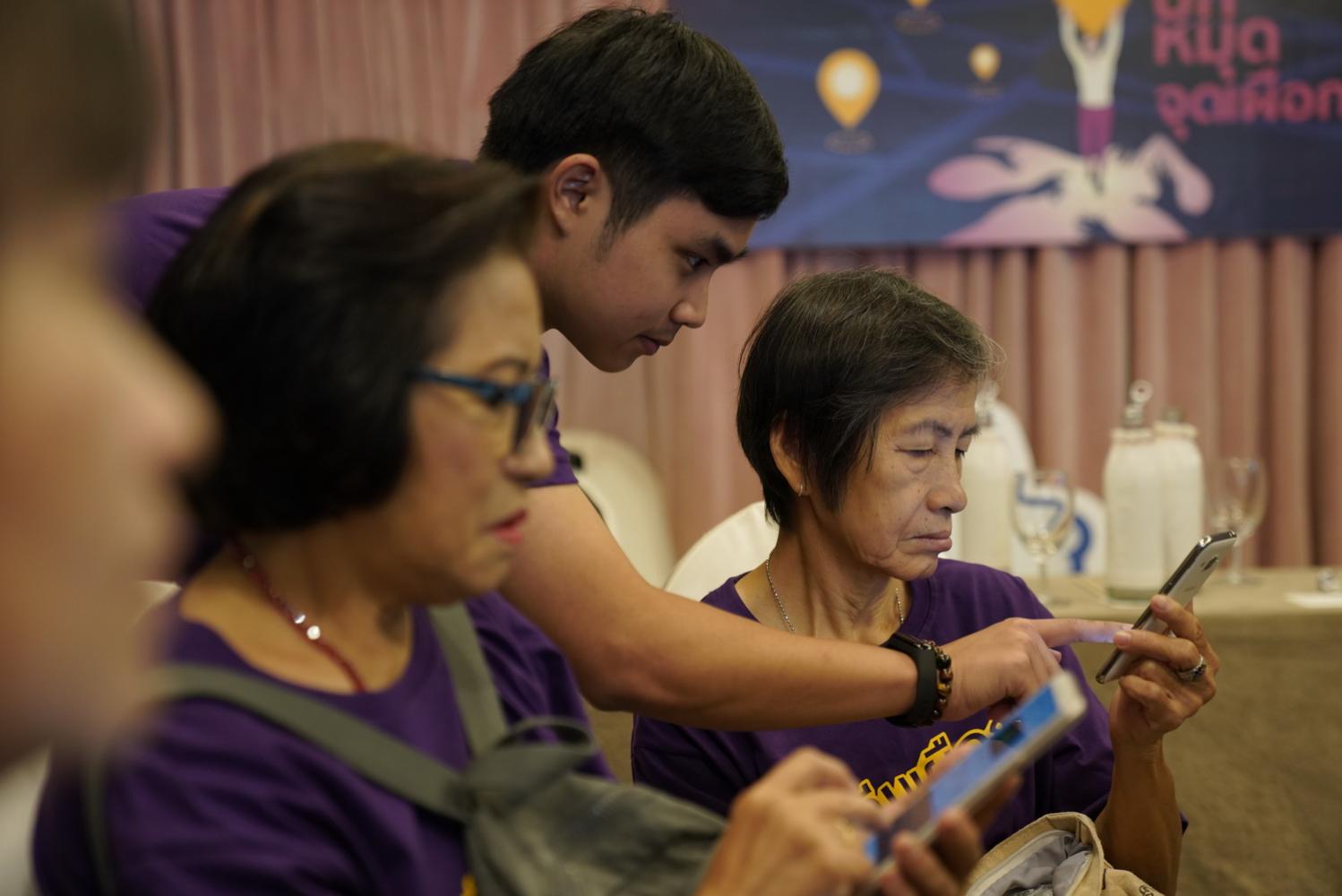 A staff member teaches a volunteer how to navigate the mobile platform. Safe Cities for Women

Sonthaya Piangpol, former head of the Ruamrudee community, was there to guide volunteers through his neighbourhood. He shared with the group how there have been many incidents reported around the area. Some women who walked alone encountered guys flashing their penis. There was also a group of construction workers getting drunk at night and harassing passersby. At the bus stop, a few people were robbed.

"We only have a few surveillance cameras around here. And the ones that are installed, we don't even know if they work," Sonthaya said, pointing around as we walked along. "It's also really dark around here at night. The lights don't really work." Along the way, both volunteers and community members took turns pointing out unsafe spots and submitting those places to Traffy Fondue. By the end of our long walk, there was a high amount of reports sent to the app.

While it was a good initiative, Sonthaya said he hopes this is just the beginning. Simply pinpointing unsafe areas is not enough with criminals running rampant.

"I hope we can take this further. We need to make a record of the perpetrators, whatever their cases are and no matter how small the incidents seem to be. We need to know the people who are mistreating our daughters. Sometimes, it's not just molesting, too, but rape. We need to increase their punishment to scare the bad guys away. If we do nothing, then women will continue to be unsafe," he said. 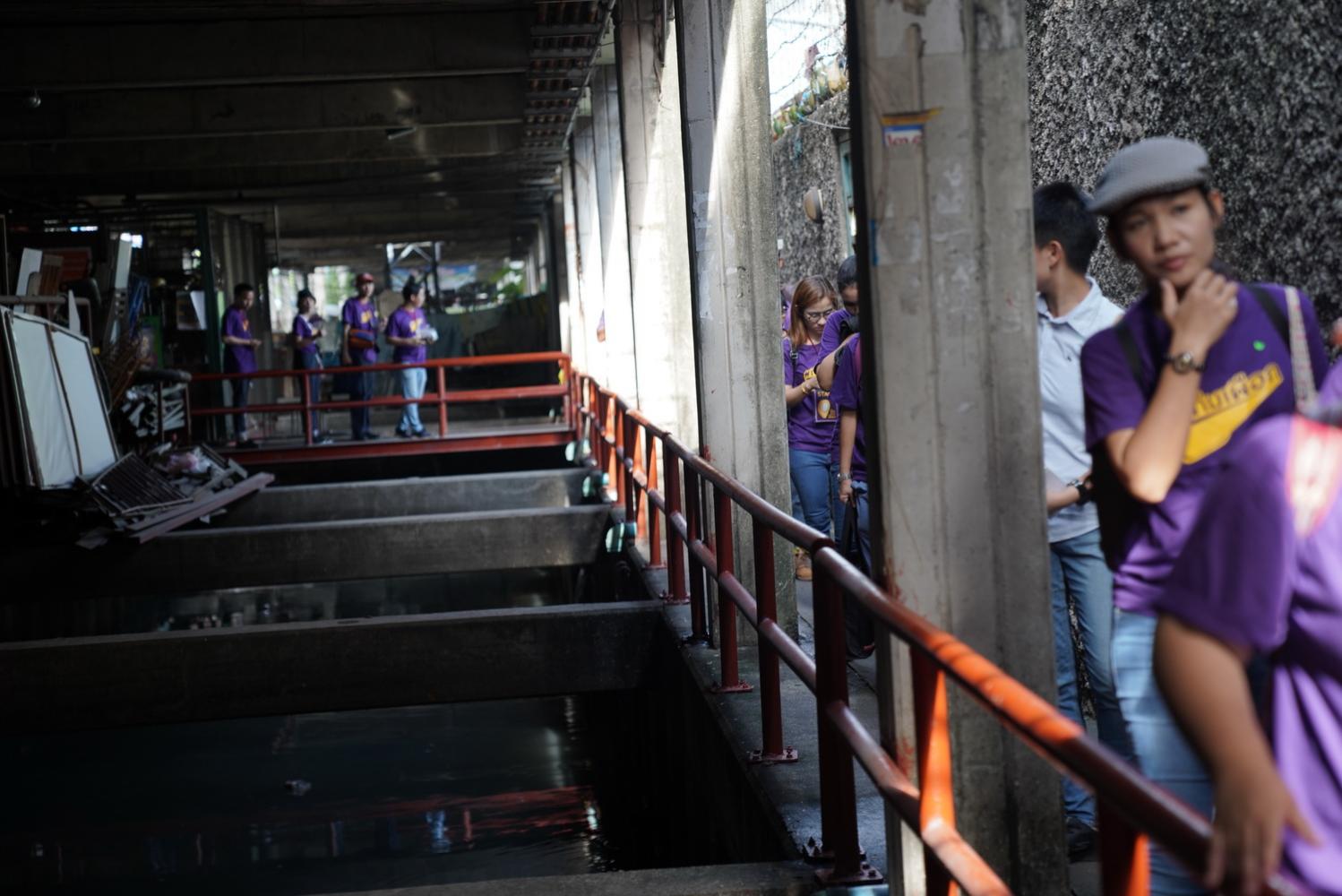 Add @traffyfondue as a friend on Line to start reporting unsafe areas around your city. Don't forget to use #teampueak in the Thai language. For more information on Safe Cities for Women's campaigns and activities, visit facebook.com/SafeCitiesForWomen.