Chiang Rai's famous White Temple will be bathed in colourful lights until Dec 22, providing another reason for visitors to explore Thailand's northernmost province

After the entrance gates closed at 5pm, people waited outside the Chiang Rai landmark of Wat Rong Khun for a much anticipated light and sound show organised for the first time since the temple's 1977 opening. 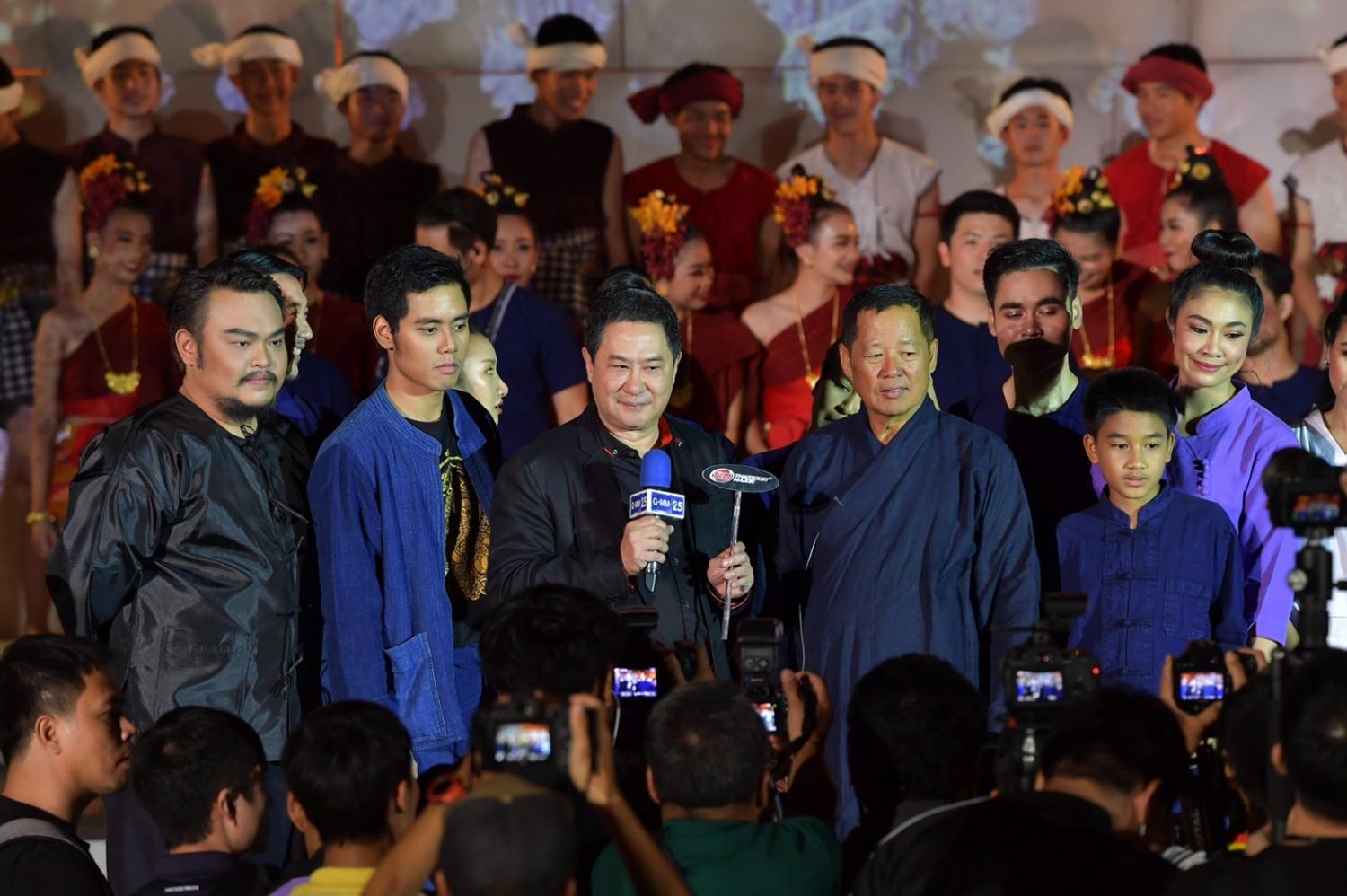 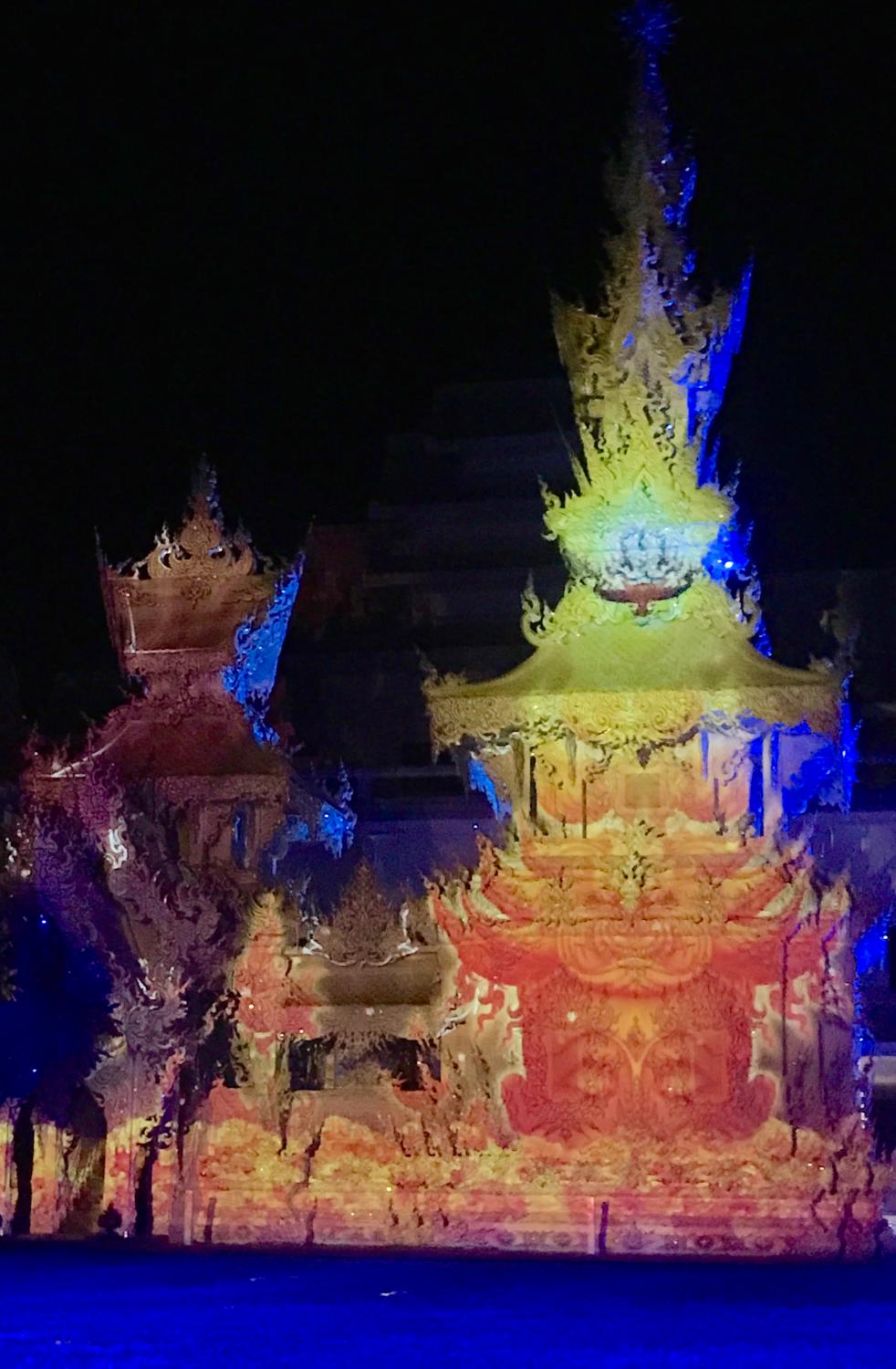 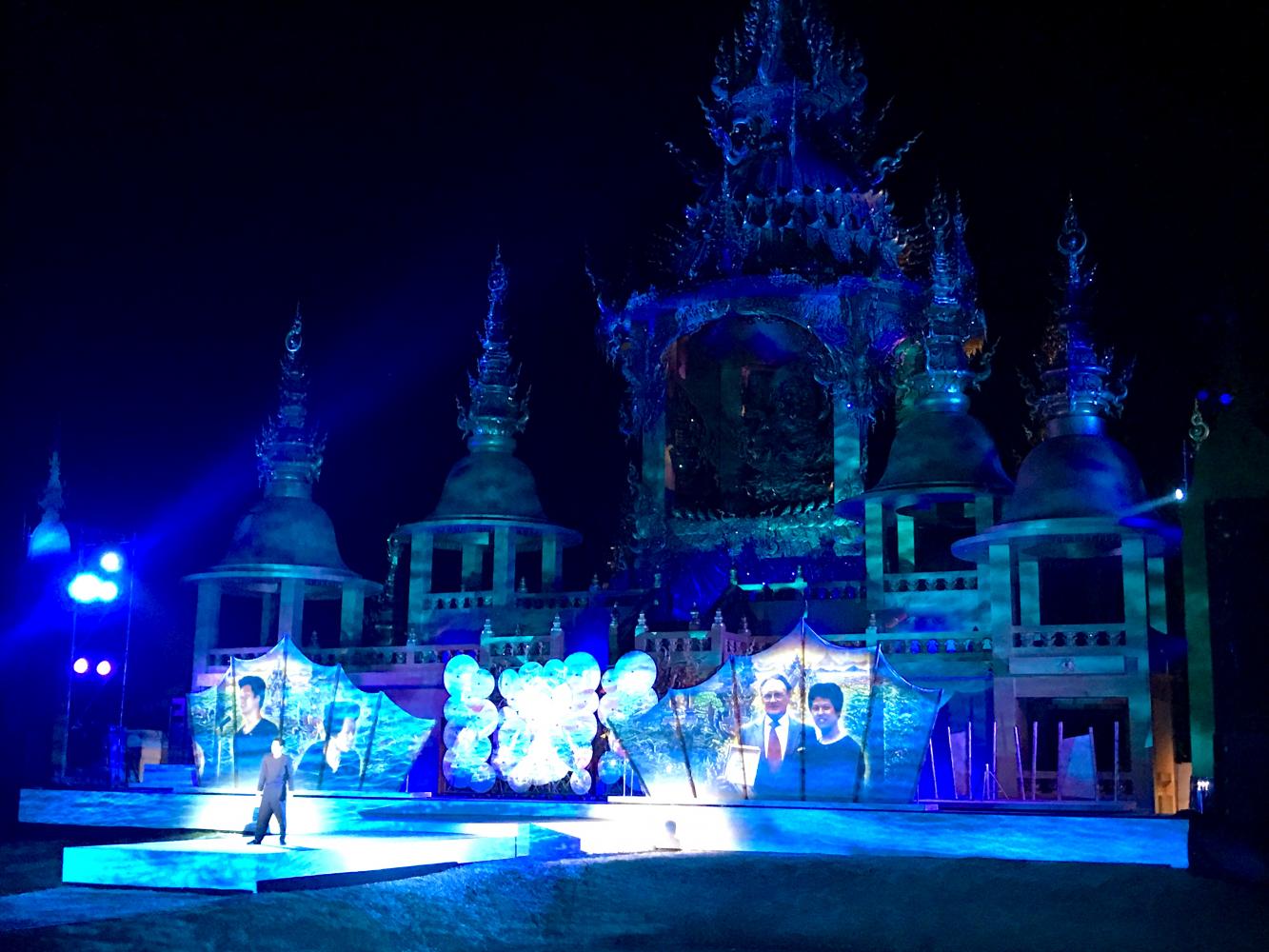 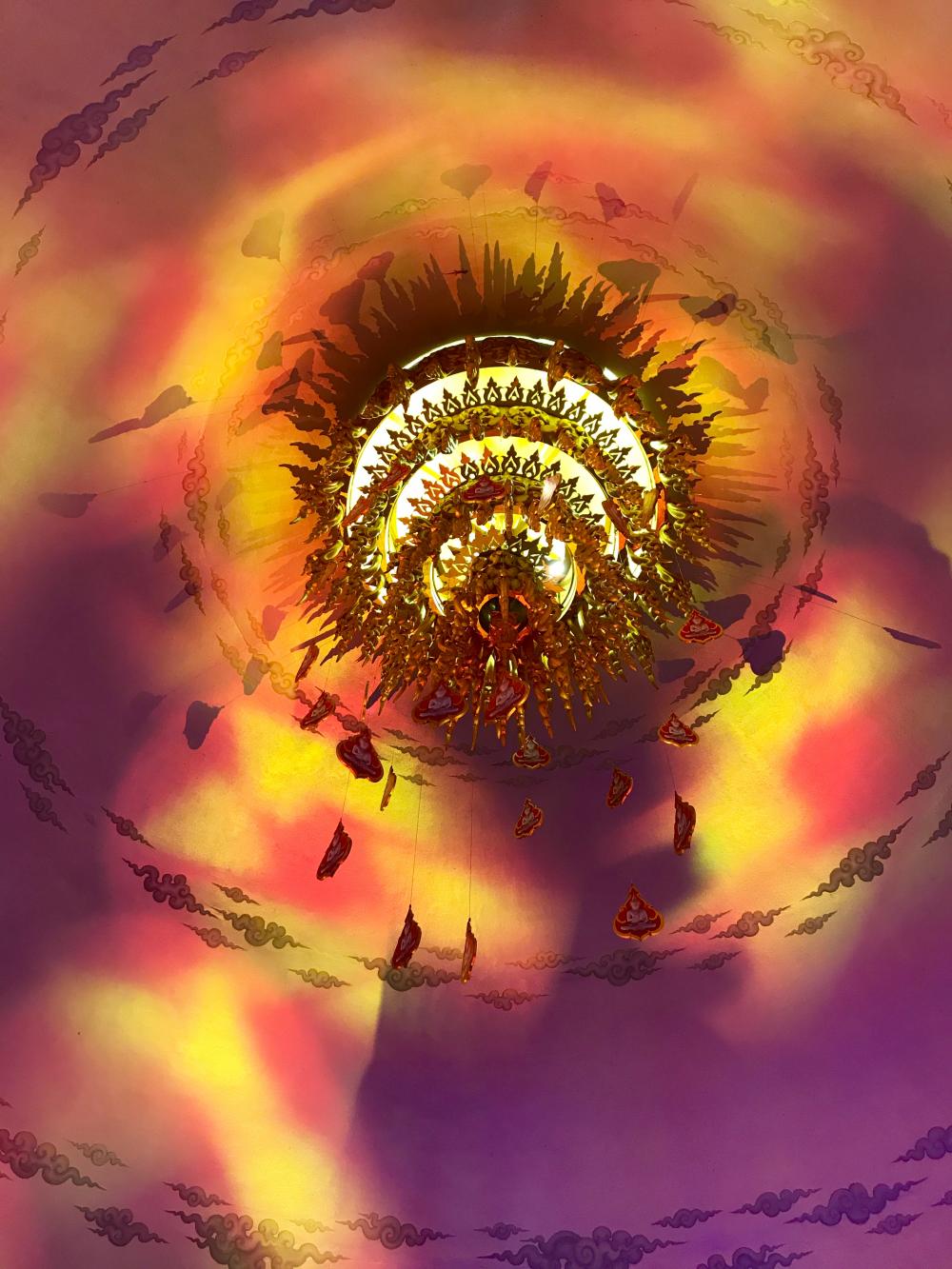 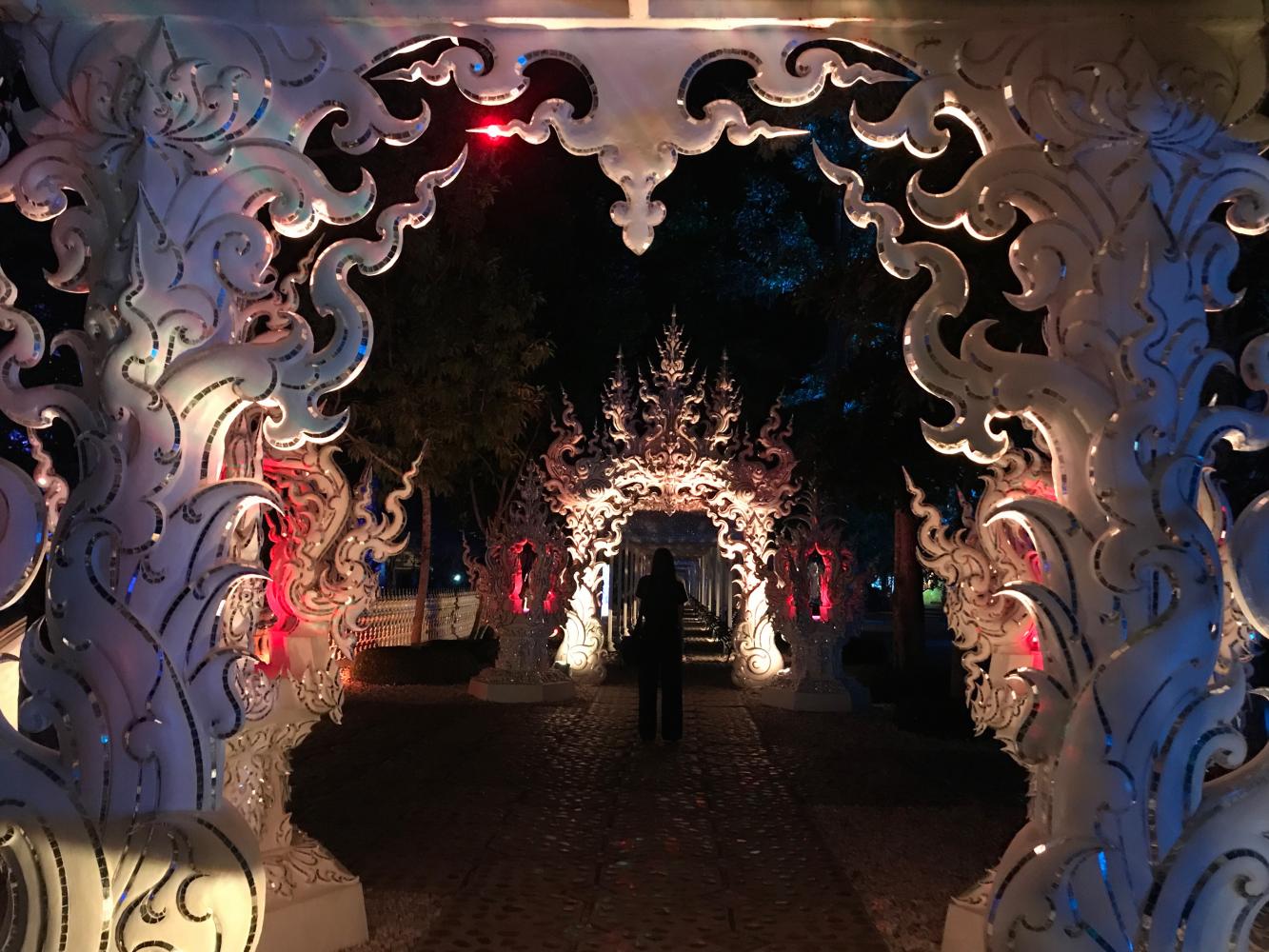 The magnificent Light Fest illuminates the White Temple after dusk. National artist Chalermchai Kositpipat, right, and Kriangkrai Kanjanapokin, CEO of Index Creative Village, discussed the event for a year and a half. The Light Fest can host up to 1,000 guests per show. It is expected to be listed as one of the top light festivals in the world.

"I dreamed of having the Light Fest since day one when I decided to build the temple in white," said Chalermchai, adding: "The white colour can reflect any light. It can give different moods to the audience from sunrise to sunset. It will be more beautiful at night when lights [by projection mapping technology] paint colourful images on the structures."

Wat Rong Khun is also known as the White Temple. It used to be a small wooden temple before the national artist renovated it with his own efforts and funds. He built the ubosot, the main principle hall, in an eye-popping Siamese-Baroque architecture. The structure was constructed in white with fragments of mirrored glass embedded in its exterior decoration.

"My work is unique because I can create the art that mixes the beauty of Thai traditional art with modernism, Taoism and Buddhism. Just like Gaudi [the most outstanding of the Catalan modernist architects whose works included La Sagrada Familia cathedral in Barcelona]. People travel from many parts of the world to see Guadi's work. I also want those who love arts to experience mine, especially during the Light Fest," he said.

After dusk when the orange sky turned black, street lights close to the temple along Road 1208 went off. The temple gate reopened. Visitors went in for the night show, which began around 6.30pm. Many locals who did not have tickets hung around the entrance gates for a glimpse of the show.

The 90-minute light and sound performance, running daily until Dec 22, is comprised of six shows presented at six different locations inside the temple compound. The first stage is the ubosot, which is divided into two zones. The front of the building is illuminated with the horrors of hell, called "The Sins". It displays hellfire and dark spirits along the wall. Flames are ignited along the white bridge, sending a "heatwave". Music pumps up the beat while evil spirits suffer as they burn in hell.

The sidewall of the ubosot is then illuminated in cool colours, representing the mood of heaven. Peaceful music starts to play. The scene is called "The Way To Heaven". It displays a series of fireballs shooting up while a seated Buddha image gradually appears on the roof.

Opposite the ubosot is another show called "Astrology", with light illuminated over the wishing well. The fourth show is located in the zone by the Bodhi tree. It is called "Enlightening", displaying light and sound that represents the moment when Lord Buddha was challenged by the demon Mara before enlightenment.

The fifth act is located at the crematorium. It is called "Circle Of Life". It shows the images of the truth of life starting from birth, old age, sickness and death. All paintings are by Chalermchai.

The final act is located at the golden shrine of Ganesha, the Hindu God of Success, and performed on an outdoor stage for hosting a musical performance. The show tells the story of Chalermchai from the day when he was young, his inspirations and his fame. Some acts also blend in his paintings on water curtains.

Although Chalermchai is proud of the Light Fest at the White Temple, he is certain that the event will be in the red.

"I know that the show will go bust, but I still want to proceed. Thanks to Mek [Kriangkrai Kanjanapokin, founder and CEO of Index Creative Village]. He has the same ambition as me that we want to create an international light festival to attract those who love art from around the world to visit Chiang Rai," he said.

Even though the event might not achieve its target after show times were reduced from two to one a day, the national artist hopes that the light festival will help generate more tourism revenue for Chiang Rai.

"Many foreign tourists thought Wat Rong Khun was located in Chiang Mai because they travel from Chiang Mai to the temple and return within a day. So the Wat Rong Khun Light Fest will make them stay at least a night and spend more in Chiang Rai," he said.

Visitors will have an opportunity to explore other attractions in the city including Wat Rong Suea Ten, whose ordination hall is outstanding because of the blue and golden murals and Wat Ming Mueang, which is regarded as one of the oldest temples in Chiang Rai.

The sleepy town of Chiang Rai is where visitors can enjoy the slow life. They can have space and feel relaxed in cosy coffee shops and local restaurants. For those who want to explore more places besides the city, border towns like Mae Sai, with its labyrinth of vendor stalls hawking all sorts of food, produce and cheap goods, can fit the bill.

The village of Bang Pang Ha in Mae Sai offers a sa paper workshop. Visitors can create their own art on a piece of sa paper or try a unique golden silk facial mask. A short drive from the village is the Tea Oil and Plant Oils Development Centre owned by the Chaipattana Foundation. The scenic place houses the Maletcha restaurant that serves delicious fusion and northern-style food.

If time is not limited, Ban Pha Mi is worth a visit. It is a quiet Akha village. One of the selling points is an impressive location of coffee shops, overlooking a valley and Doi Pha Mi mountain. The village also provides homestays, trekking and a cave tour to the infamous Tham Luang where the Wild Boars football team were trapped inside last August.

The Light Fest of Wat Rong Khun, along with the seasonal cool weather of Thailand's northernmost province, can be the impetus for new visitors to come to Chiang Rai. For those who already visited the White Temple, this is a time to revisit because it might be the first and last time to see the White Temple at night bathed in light and be part of Chiang Rai's history. 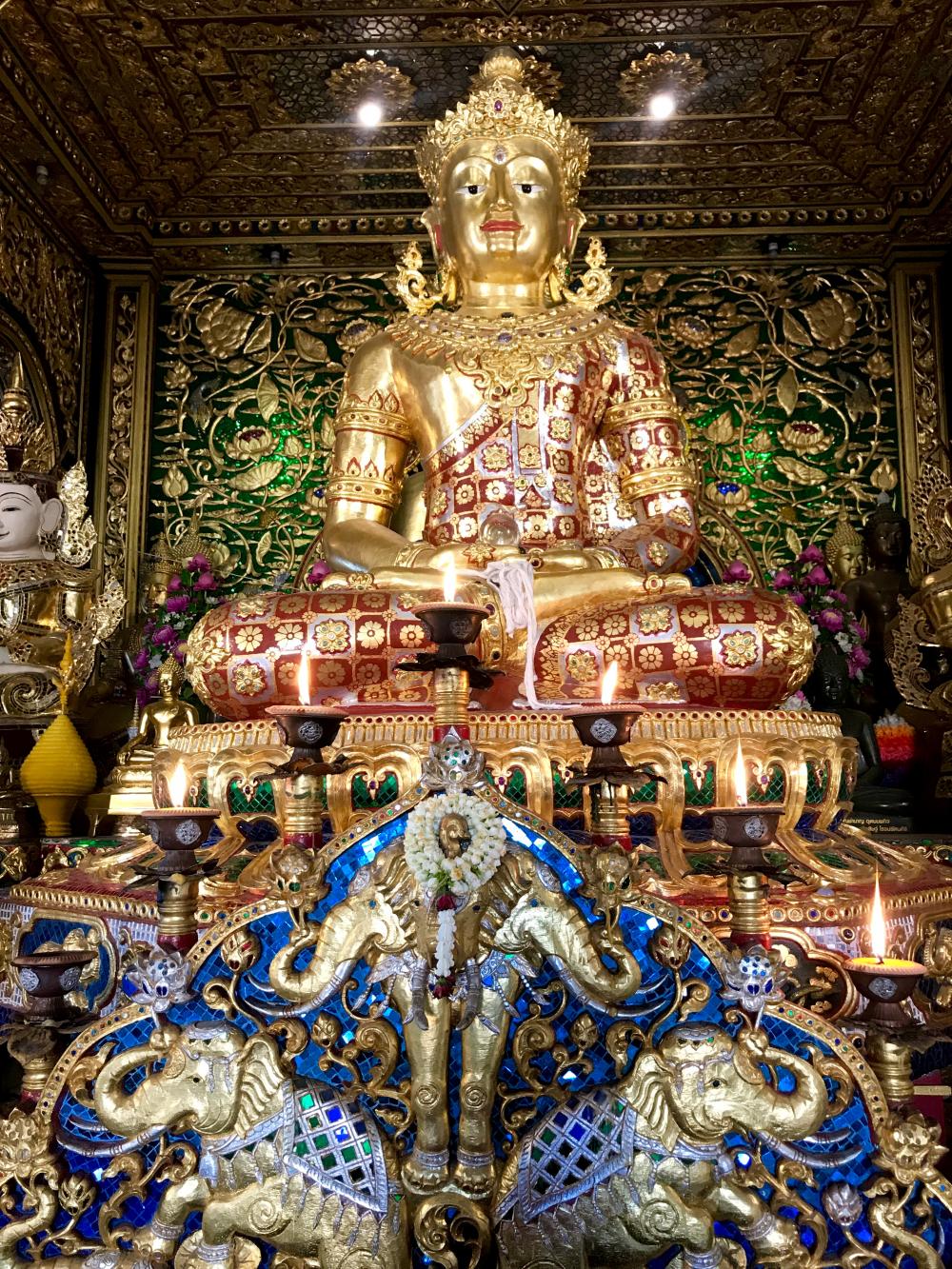 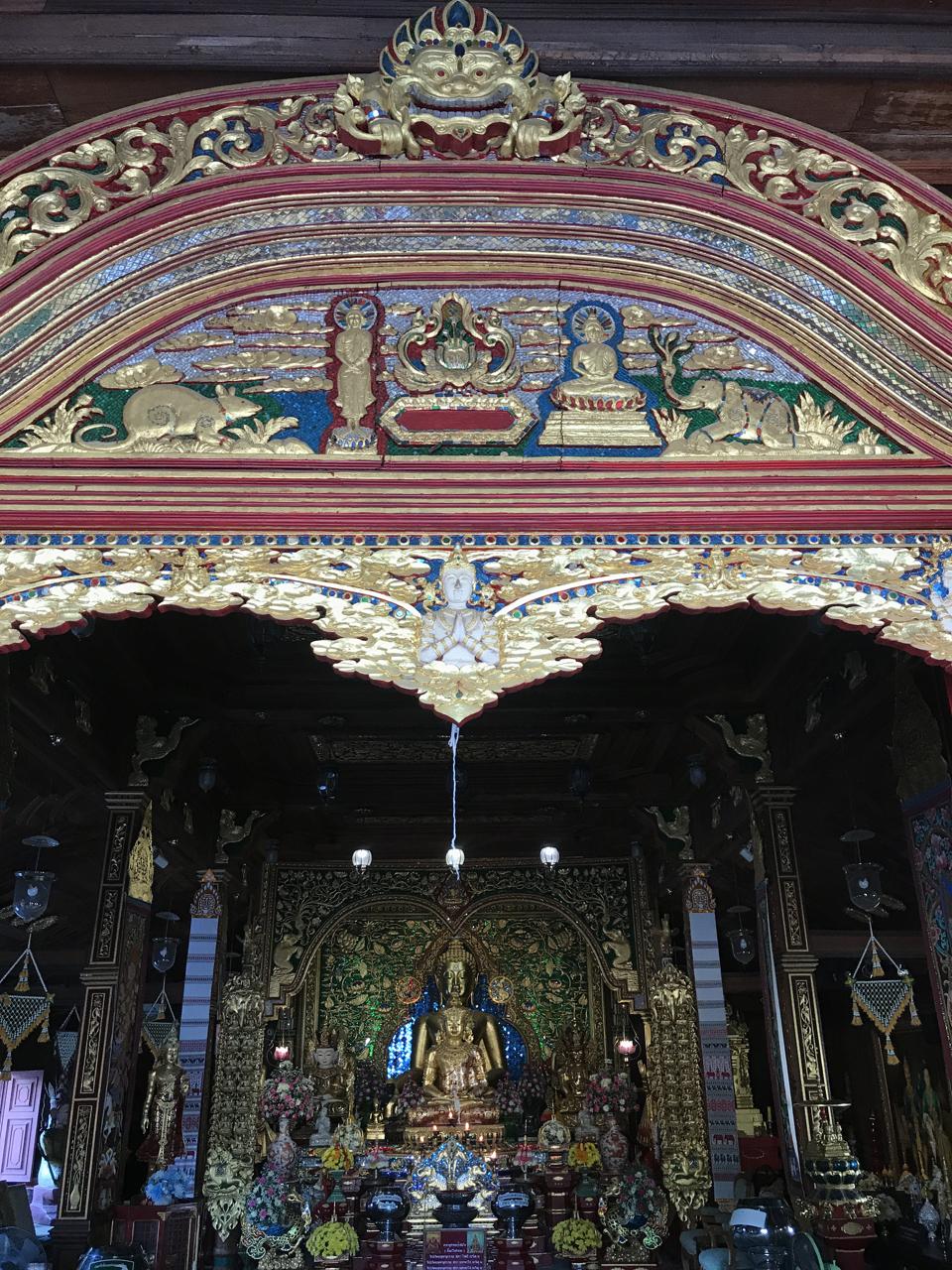 Located next to Wat Ming Muang is the Chinese shrine of the Public Welfare Foundation. Founded in 1959, the foundation helps needy people, victims of disasters and students. It is also a quiet place to pay respect to Chinese gods. 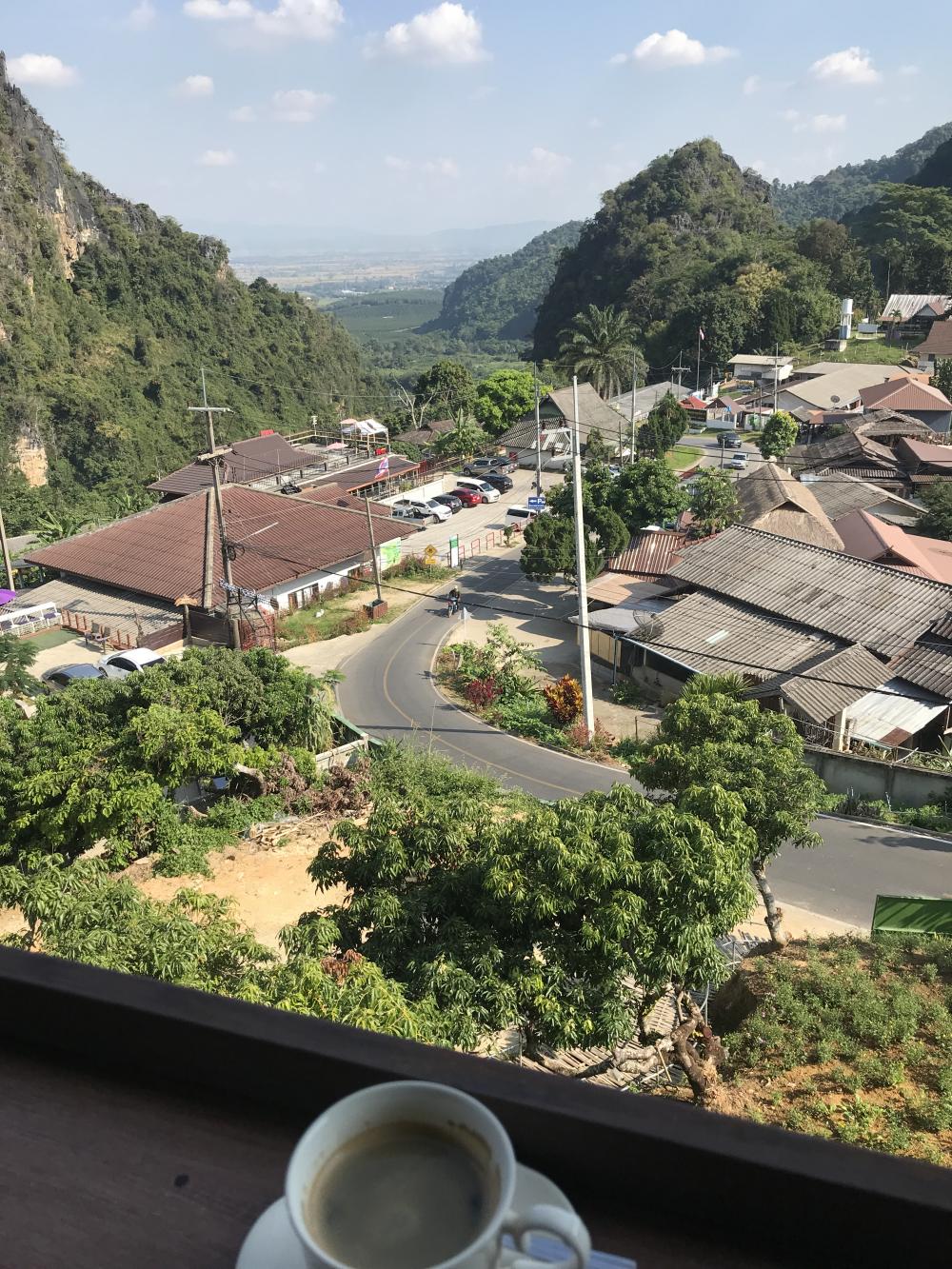 Phu Fah Sajae coffee shop is located in Ban Pha Mi, Mae Sai district. It is a popular place for visitors to have a panoramic view of the village and also Doi Pha Mi, or bear cliff. According to locals, the large mountain looks like a reclining bear. From left, the smallest peak is the head with a pointed nose, then the tummy and feet. 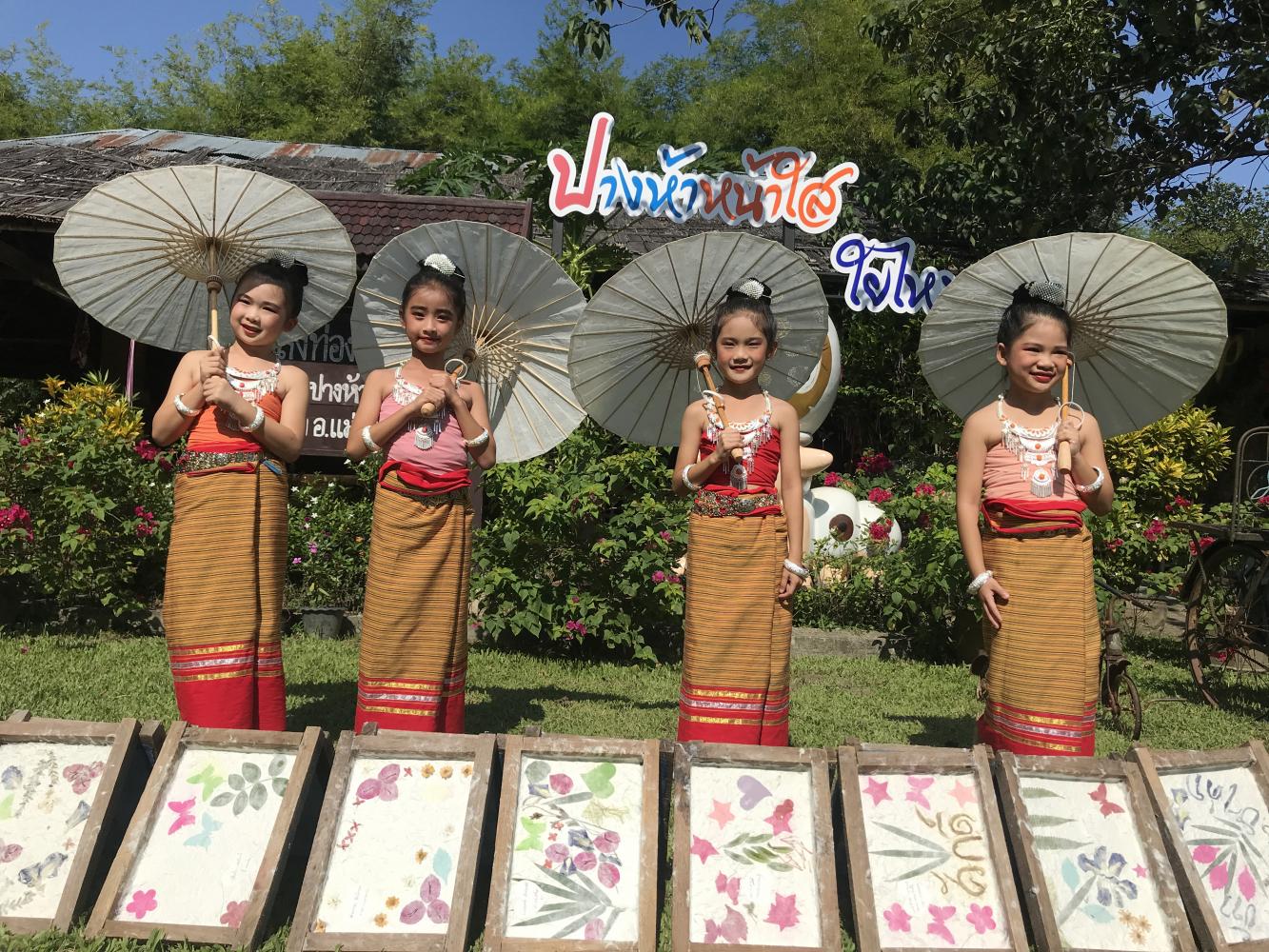 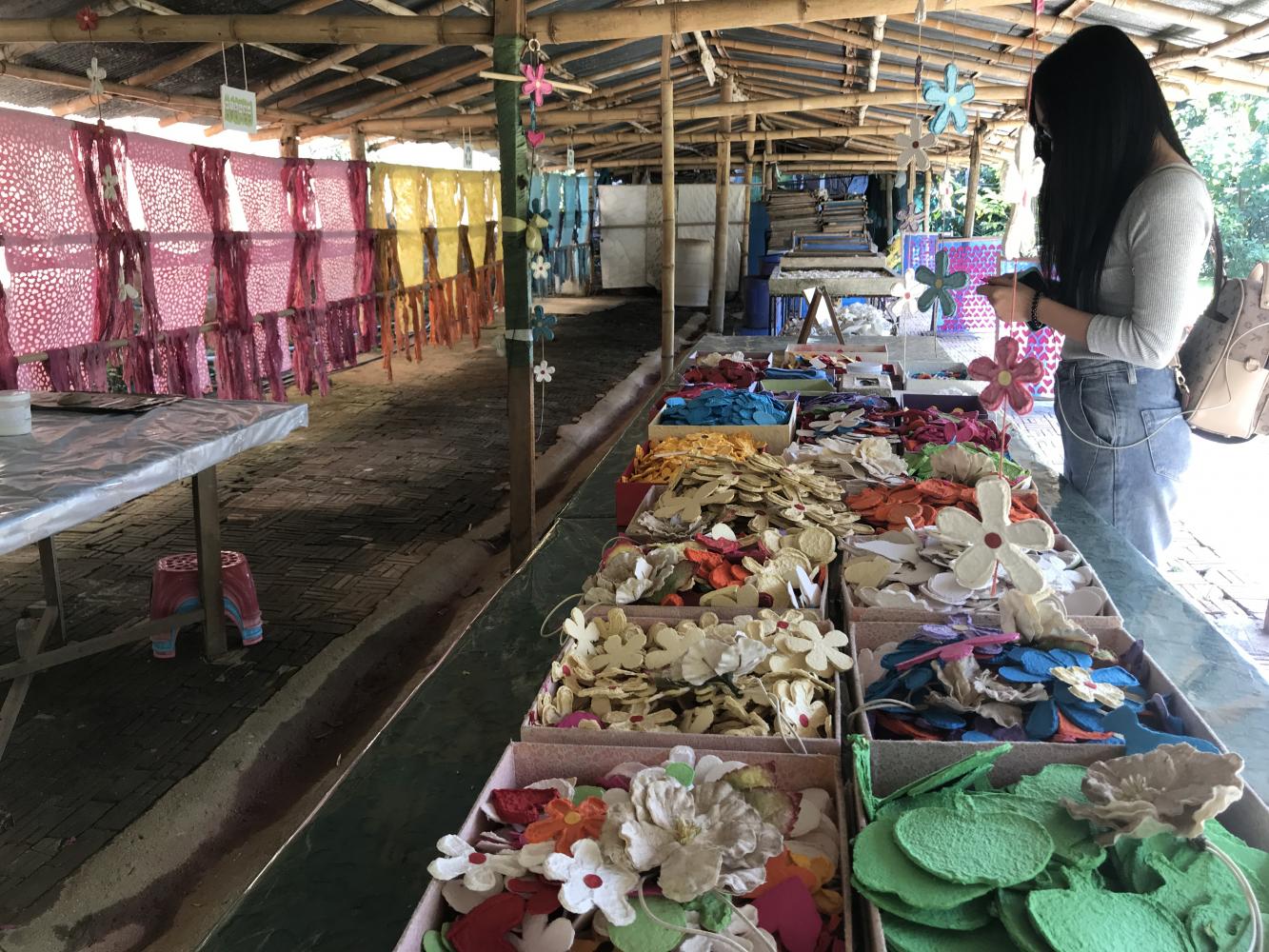 Ban Pang Ha is a border village in Mae Sai district. Pang means a rest stop and ha is a name of ton wah or Java plum tree that was found in the area. The community has produced sa paper for export for almost three decades. Three years ago, Ban Pang Ha launched its tourism activities. It offers a homestay service plus 10 workshops for visitors to have local experiences. Making sa paper is one of the tourist programmes. Visitors can learn how to make sa paper at Jinnaluck Miracle of Saa. The facility is also a welcoming centre that can host a traditional performances of young students, a showroom of sa paper and sa products. 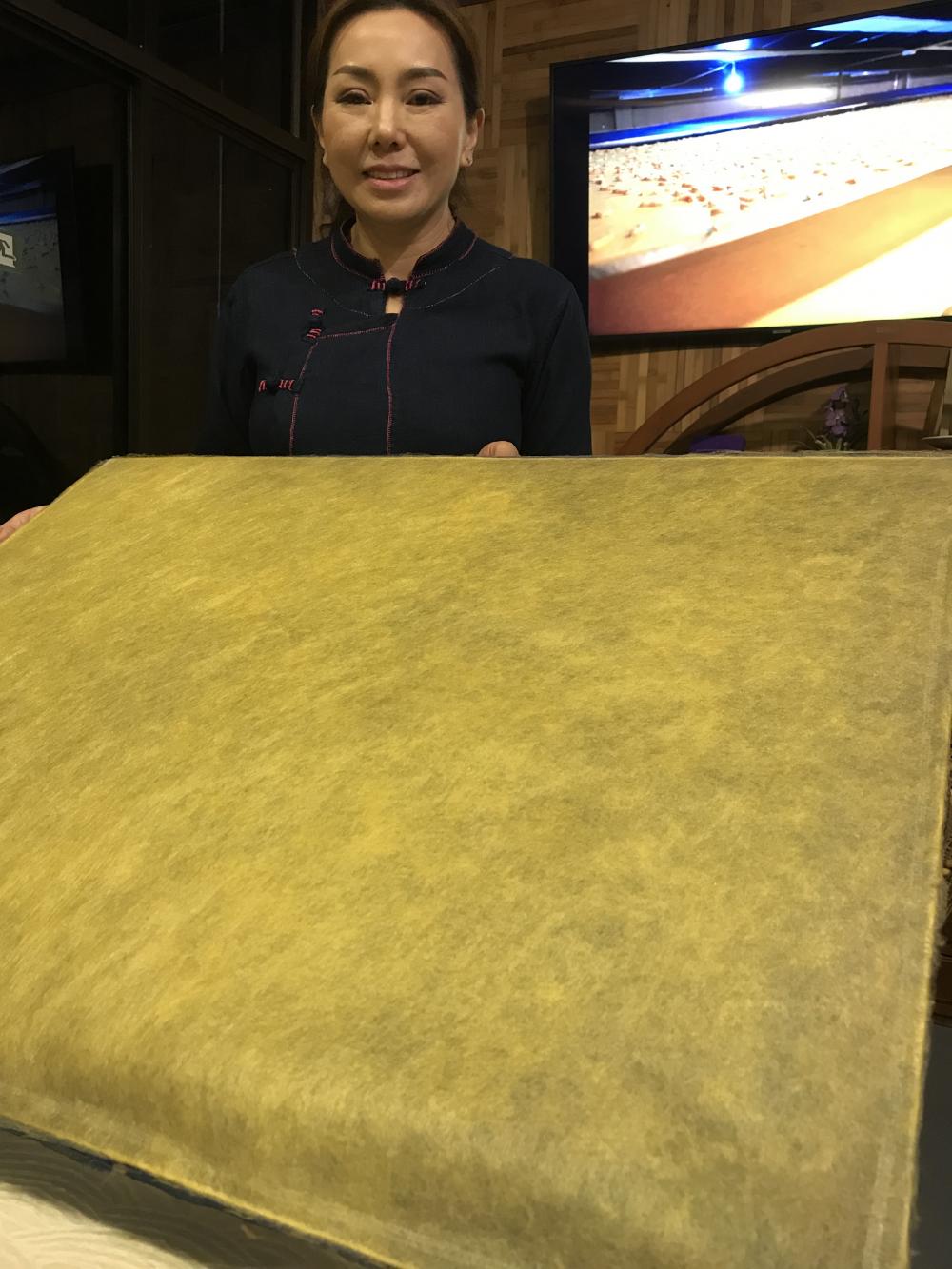 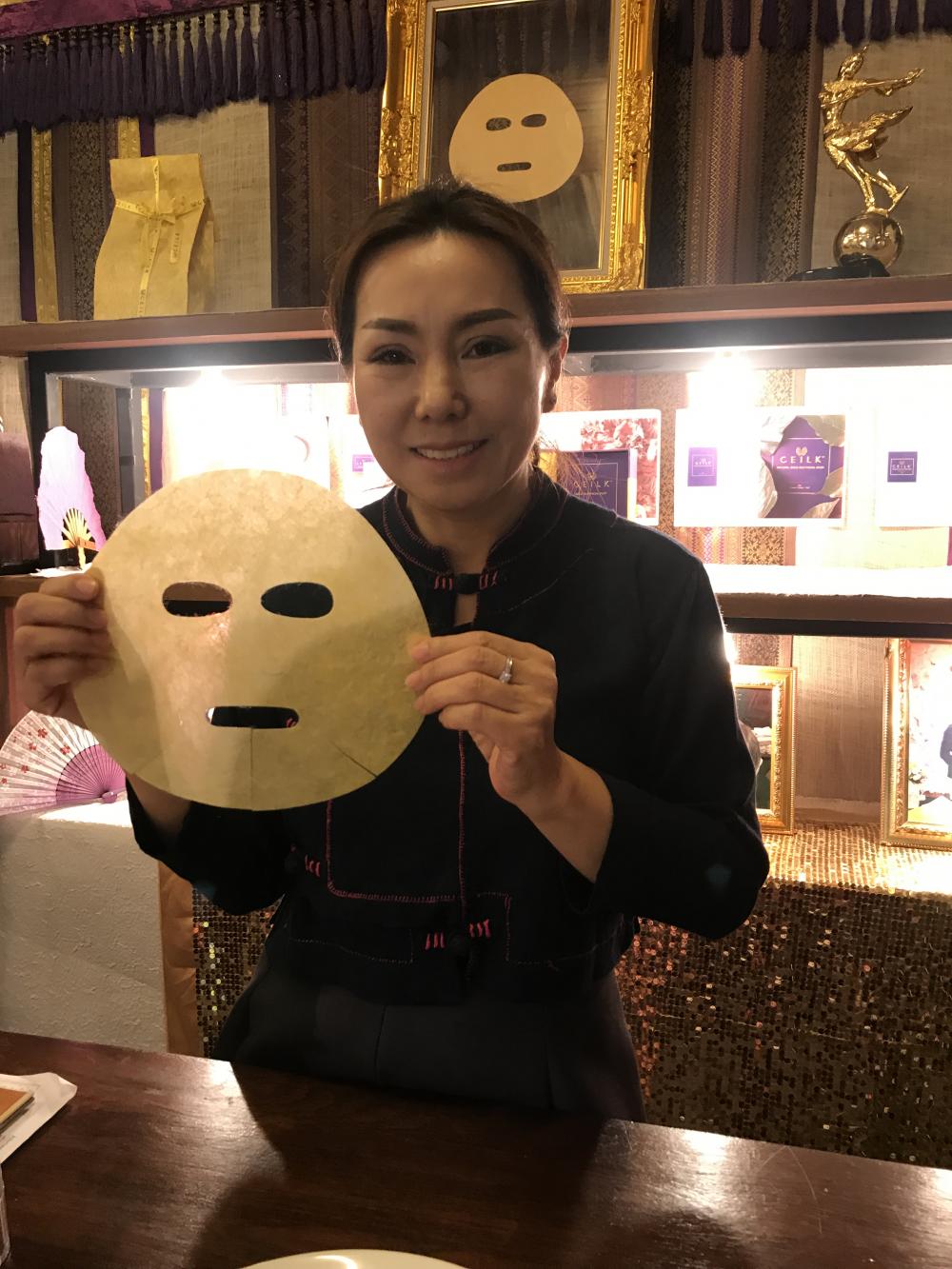 Jinnaluck Chummongkol is the pioneer of sa paper in Ban Pang Ha community. Around the year 2000, she worked with a research team at Chiang Rai Rajabhat University to produce a golden silk sheet. The paper had a soft texture like a fine cloth. It is a natural product created by silkworm thread. In 2003, the silk paper won an innovation award. Today, Jinnaluck runs Ceilk brand for her beauty products including facial masks, cream and scrub. She works with up to 100 farmers to supply natural silk sheets for her business. Visitors to Ban Pang Ha can try the facial spa with a natural golden silk mask (900 baht) or buy natural silk thread products as souvenirs. 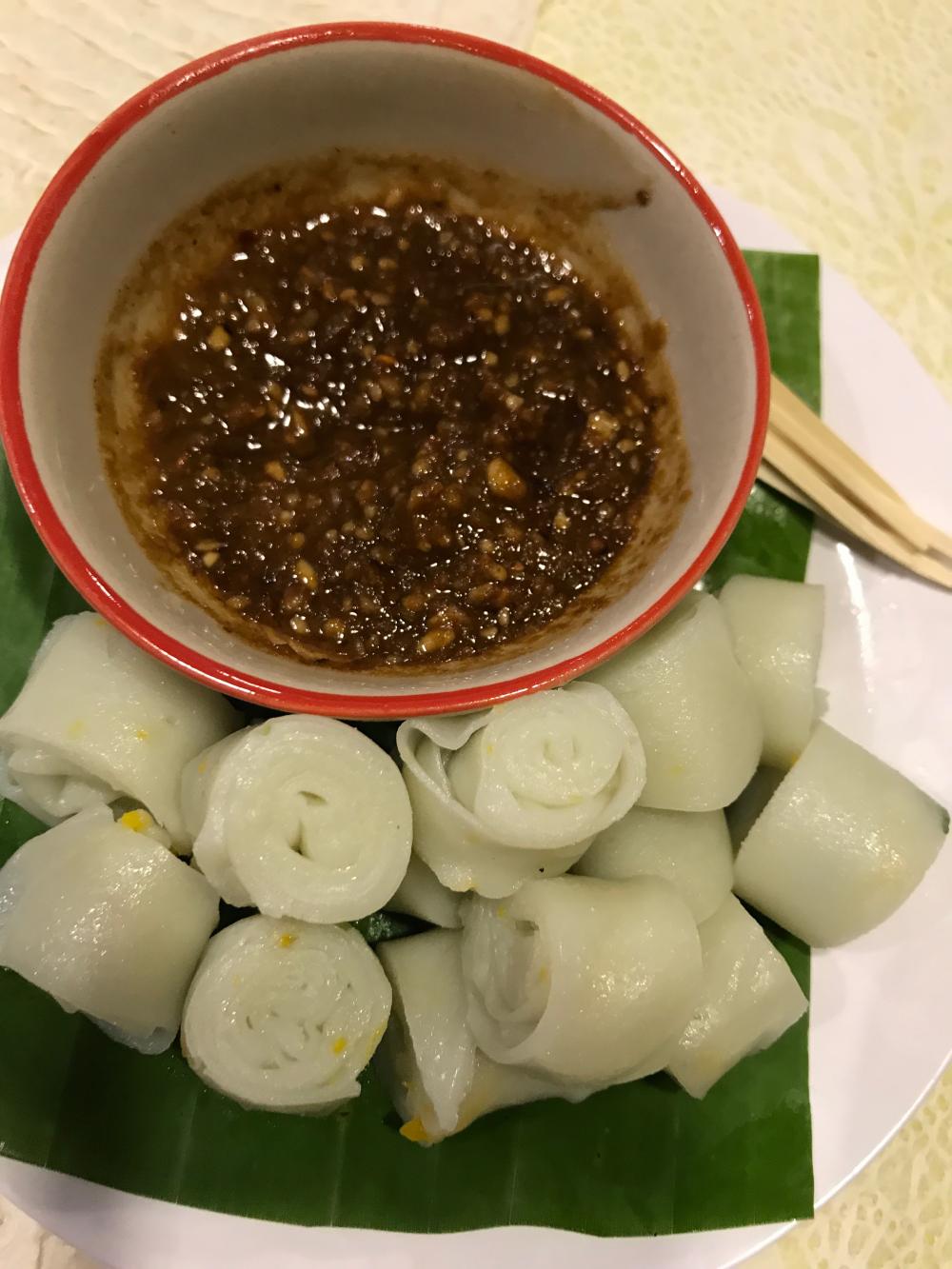 Khao soi noi is the name of a snack from Ban Pang Ha. It is made of rice flour mixed with water, tiny sliced pumpkins, coriander and a little salt. The batter is steamed, then rolled and cut into small pieces. It is served with a nutty sauce which is made of crushed peanuts, soy sauce, sugar and sesame. 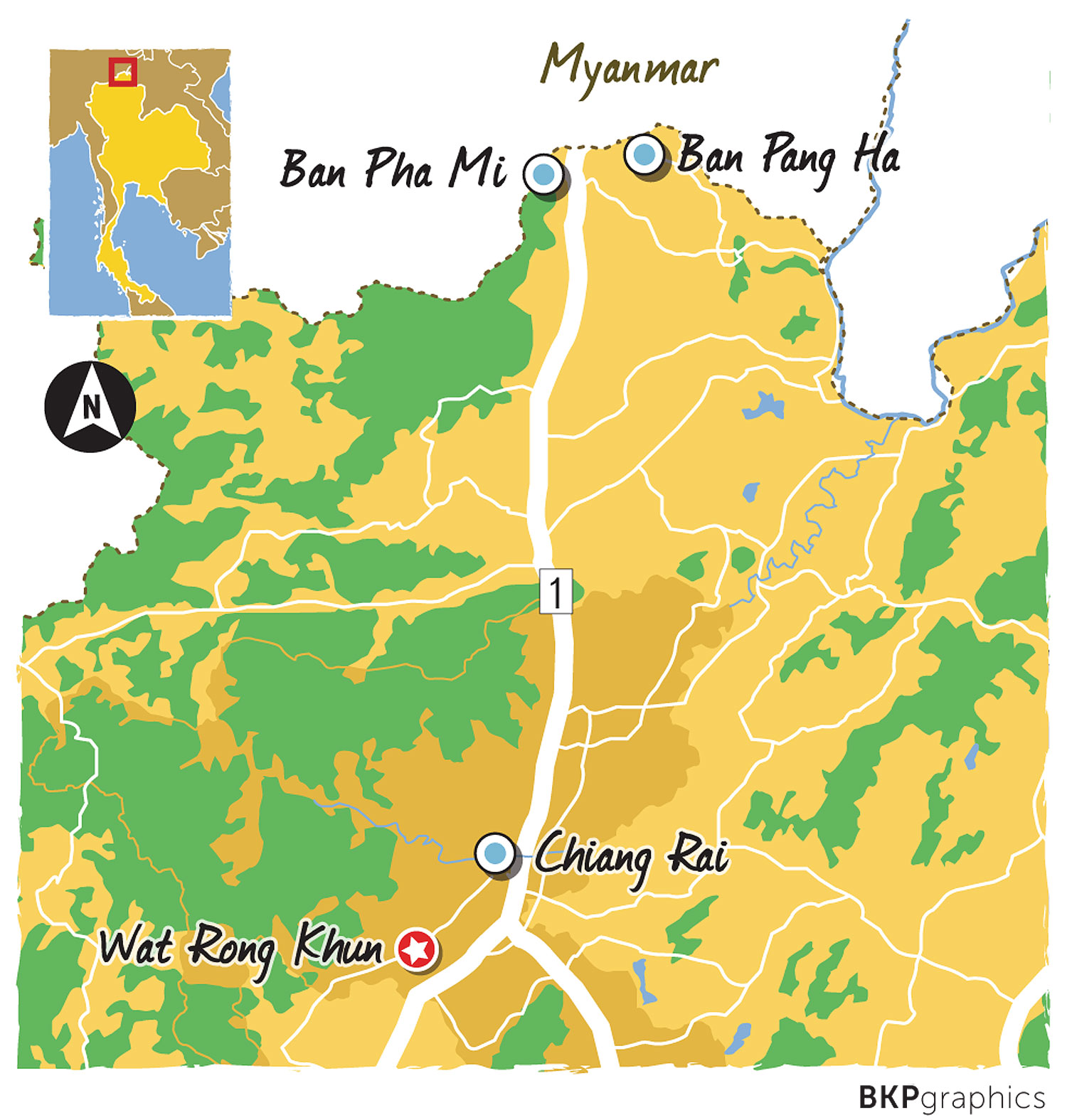