A royal visit, and ruins restored

published : 5 Dec 2019 at 04:01
newspaper section: Life
writer: Pongpet Mekloy
A collection of photographs of King Bhumibol Adulyadej taken during his visits to Si Satchanalai decades ago are on display in a small community museum near Wat Phra Prang. Its exhibits cover the history of the community, local traditions and way of life. The museum is open daily and is free to enter.

HM King Bhumibol Adulyadej spent much of his 70-year reign travelling the length and breadth of the Kingdom, mainly to learn about the plights of his people and find out how to help them in a sustainable way. At numerous towns and villages, his royal visits are remembered as a major event in local history. Si Satchanalai in Sukhothai province is no exception.

On March 1, 1958, during their well-documented tour of the North, King Bhumibol and Queen Sirikit travelled by car from Phitsanulok to the ruins of the ancient city of Si Satchanalai. Not long after the royal couple crossed the provincial border into Sukhothai, the dusty dirt road became so bumpy that the exhaust pipe of their car came off, forcing the entourage to halt until the problem was fixed.

On the rest of their way to Si Satchanalai, King Bhumibol and Queen Sirikit dropped by the towns of Si Samrong and Sawankhalok. Everywhere the entourage stopped, the townspeople would lay pieces of white cloth, each about the size of a handkerchief, on the ground for the monarch to step on. The locals then kept the cloths as souvenirs. The old footage of the royal trip is pretty blurry but the utmost love and respect that the people had for their king was crystal clear. 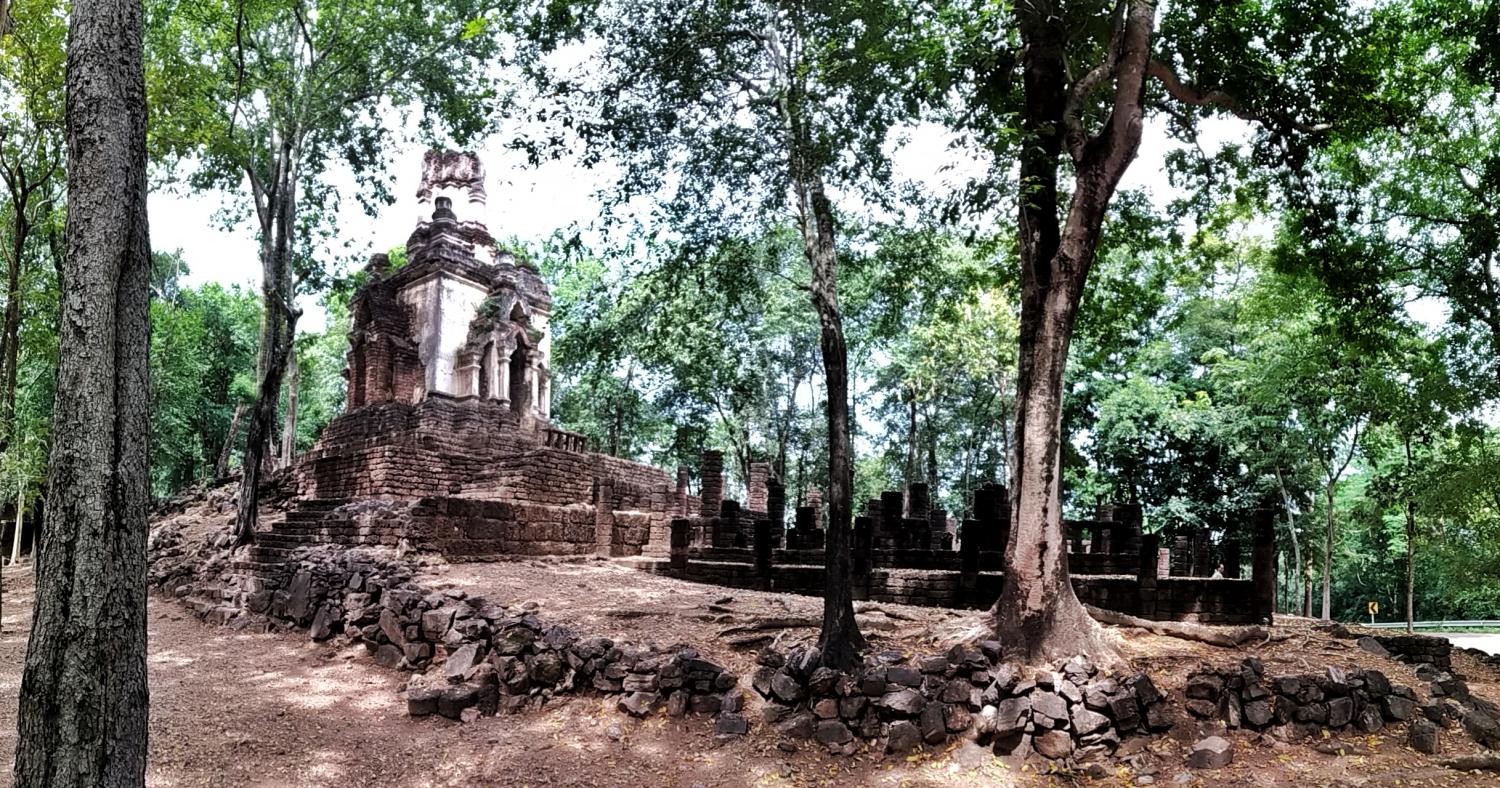 Many of the 283 archaeological sites at Si Satchanalai Historical Park are located outside the city walls. Wat Chedi Kao Yot at the foot of a hill just north of the ancient city is one. King Bhumibol Adulyadej had to walk for half an hour from the southwestern side of the ancient city to these ruins. Nowadays, the site can be reached by car.

I was overwhelmed as I watched the film on the internet recently. Those people had known the young monarch for only 12 years. I wasn't born until a decade later but, like the majority of Thais alive today, got the chance to know how the king continued to serve his people throughout the rest of his remarkable life. I felt the happiness of the lucky villagers -- the proud owners of those handkerchieves -- and at the same time, I envied them.

The royal couple arrived in Si Satchanalai in the afternoon. They crossed the Yom River on what appears to be a makeshift bridge to visit the ruined temples of Wat Chang Lom, Wat Chedi Chet Thaeo, Wat Nang Phya and Wat Phra Prang which was outside of the city walls. They travelled back to Sukhothai to spend the night and visited the ancient city there the following day.

At the time, Si Satchanalai and the surrounding area was not yet designated a historical park. The monuments themselves were yet to be restored. The royal trip in 1958 played an important role in making that happen.

The historical parks of Sukhothai and Si Satchanalai were officially opened in 1988 and 1990, respectively. Both were collectively listed by Unesco as World Heritage sites in 1991. 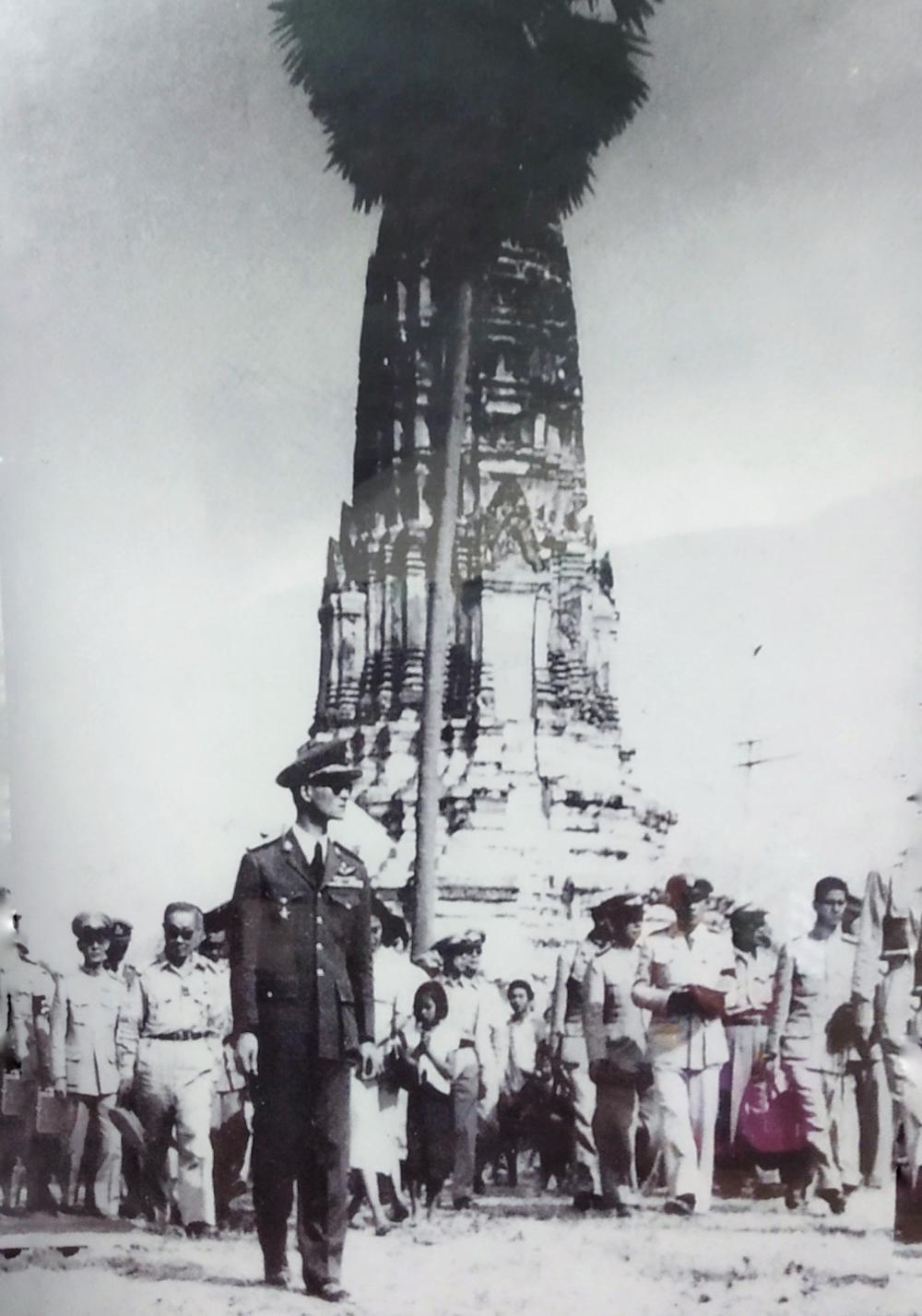 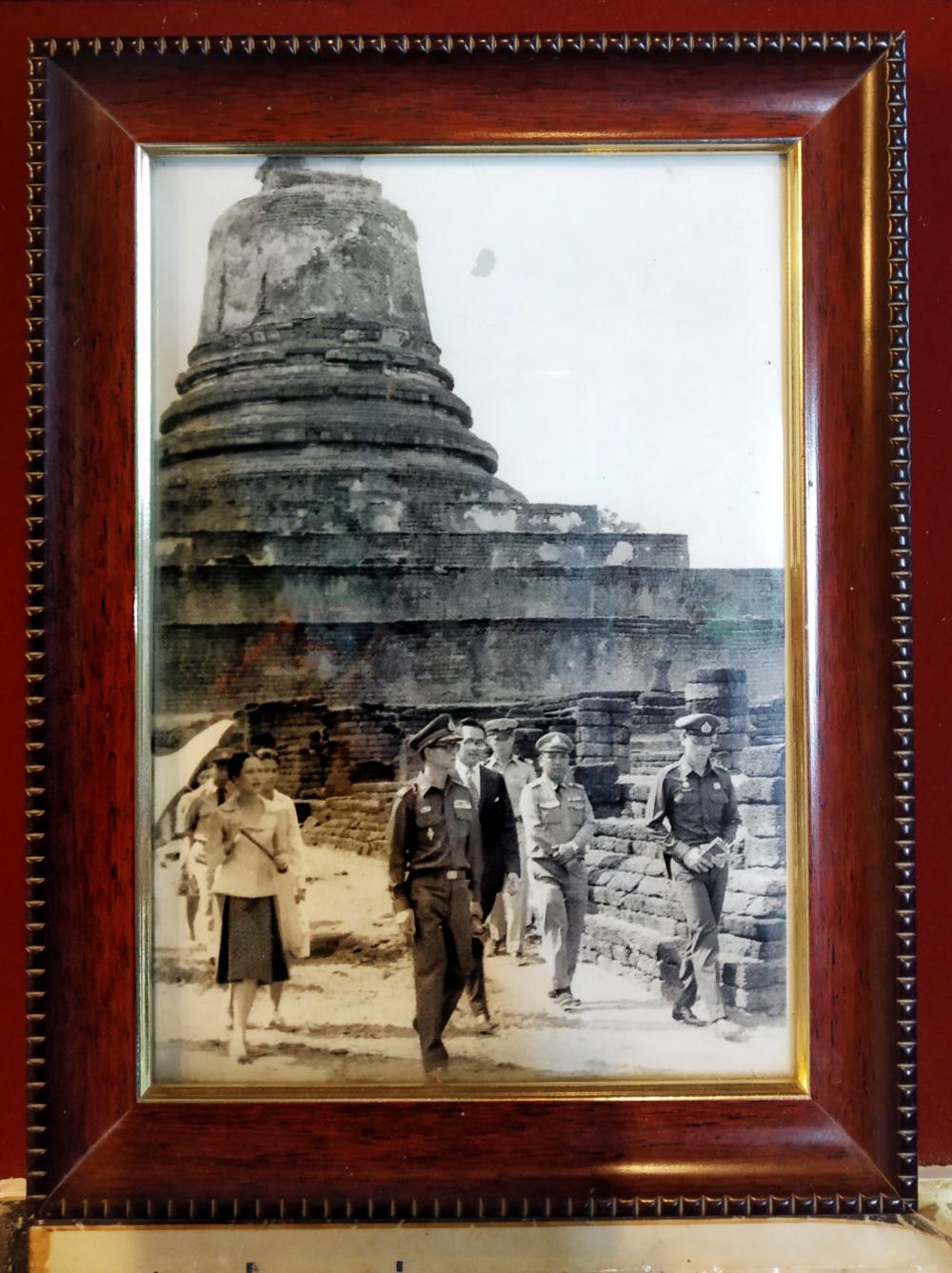 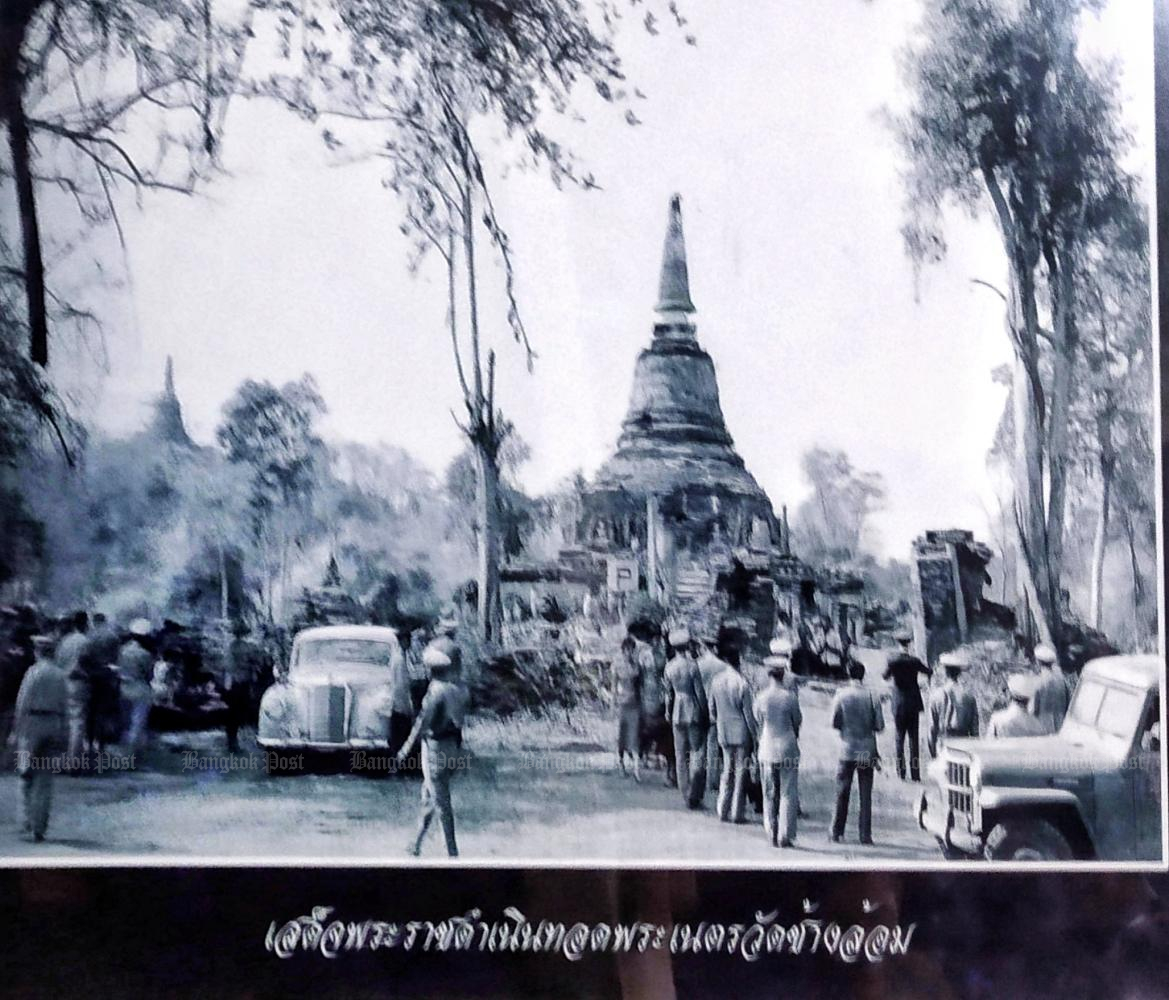 A collection of photographs of King Bhumibol Adulyadej taken during his visits to Si Satchanalai decades ago are on display in a small community museum near Wat Phra Prang. Its exhibits cover the history of the community, local traditions and way of life. The museum is open daily and is free to enter. 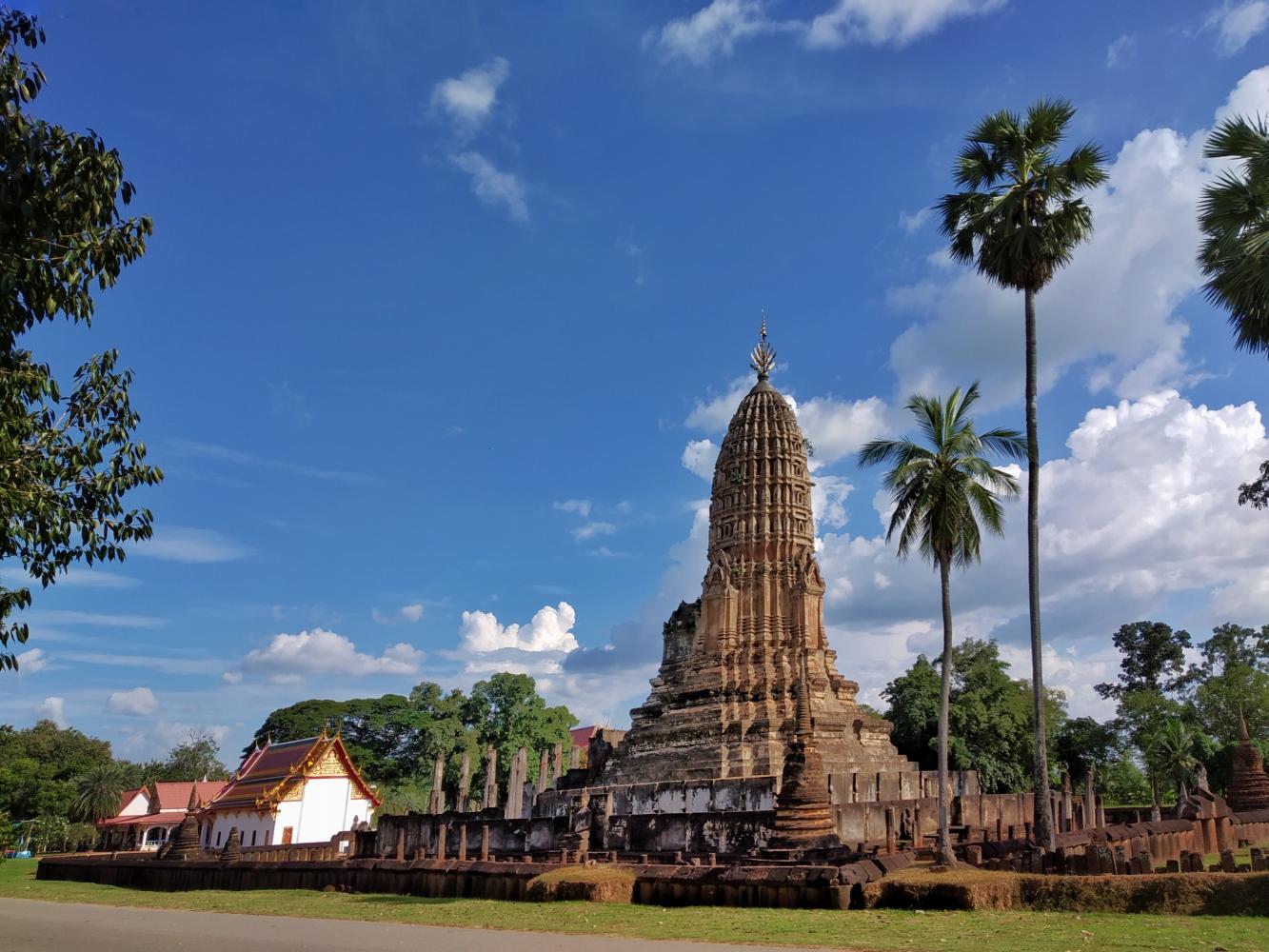 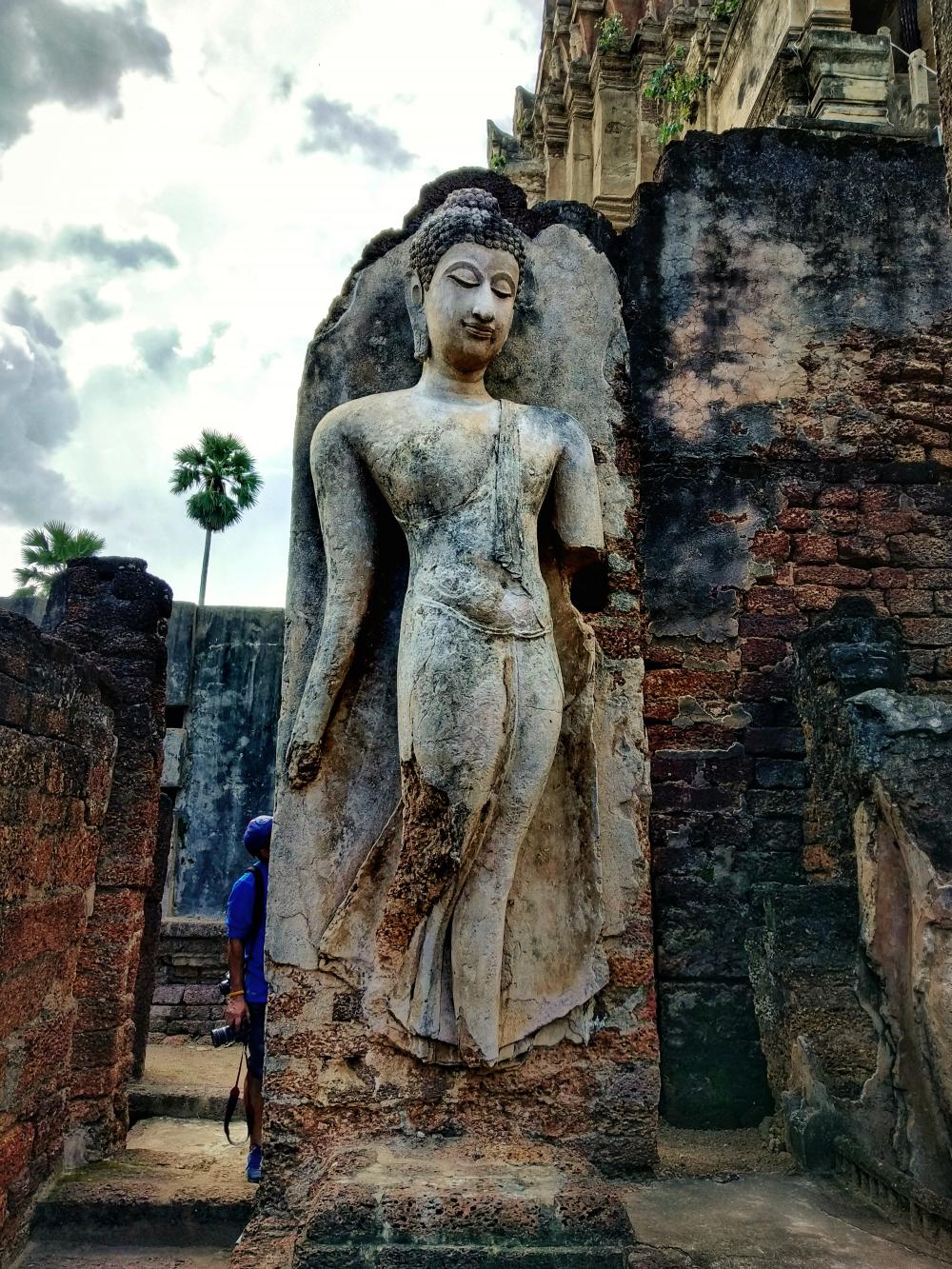 Wat Phra Si Rattana Maha That Chaliang, also known as Wat Phra Prang, is located in what was the city of Chaliang before the settlement was moved to Kaeng Luang further upstream and renamed Si Satchanalai. The ancient temple comprises architectural elements from different periods. The remains of the east laterite gate, with a Bayon-style face at the top, date back to the period of Khmer rule. The vihan (prayer hall) and the beautiful statue of a walking Buddha are of Sukhothai style, while the prang, or stupa, which is the temple's most prominent structure, is clearly Ayutthaya architecture. From tomorrow until Dec 10, the grounds around Wat Phra Prang will host Yon Adit Si Satchanalai, a nostalgic event where fair-goers are encouraged to wear clothes made with traditional fabrics. At the fair, you can enjoy local delicacies, folk performances, sales of handicrafts and village products and much more. 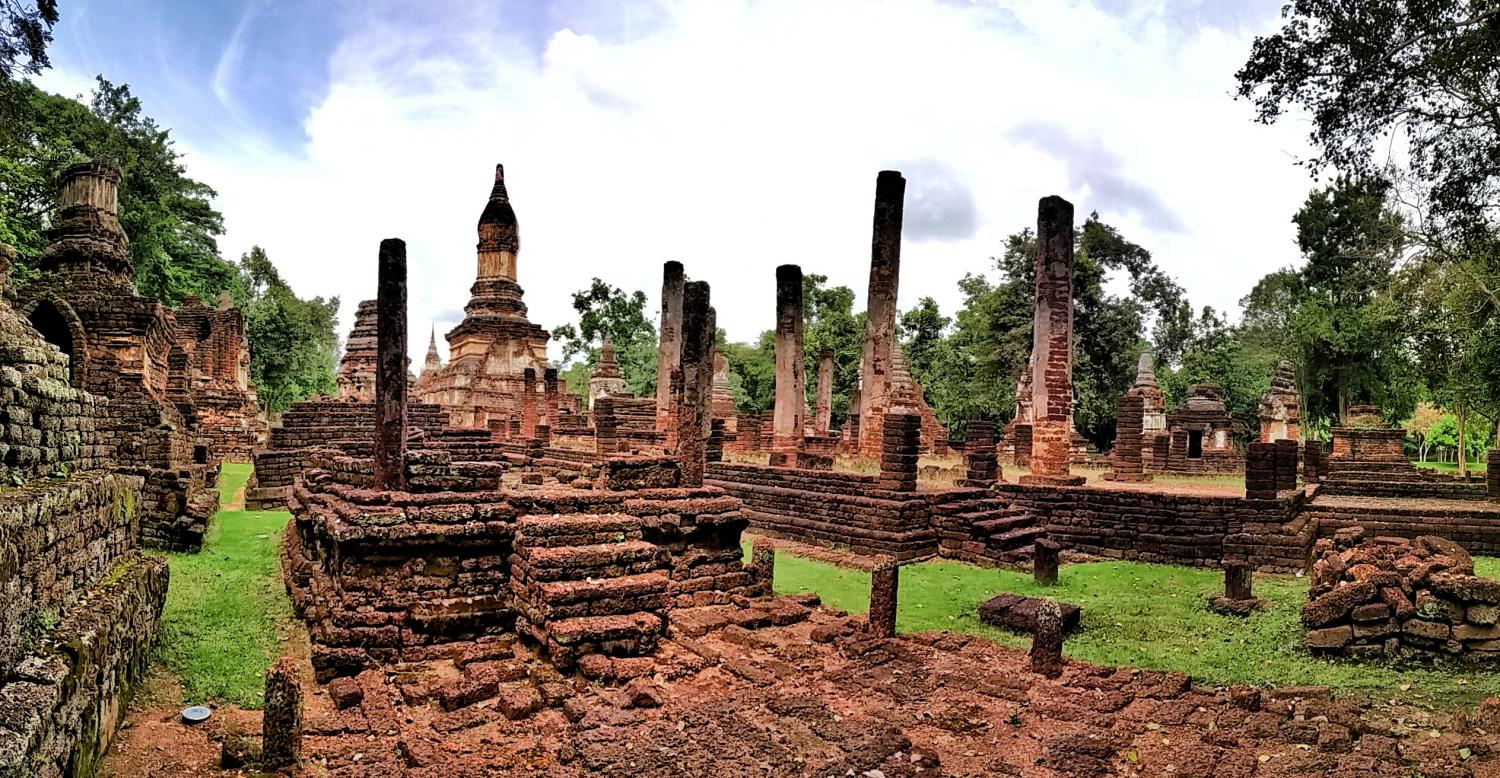 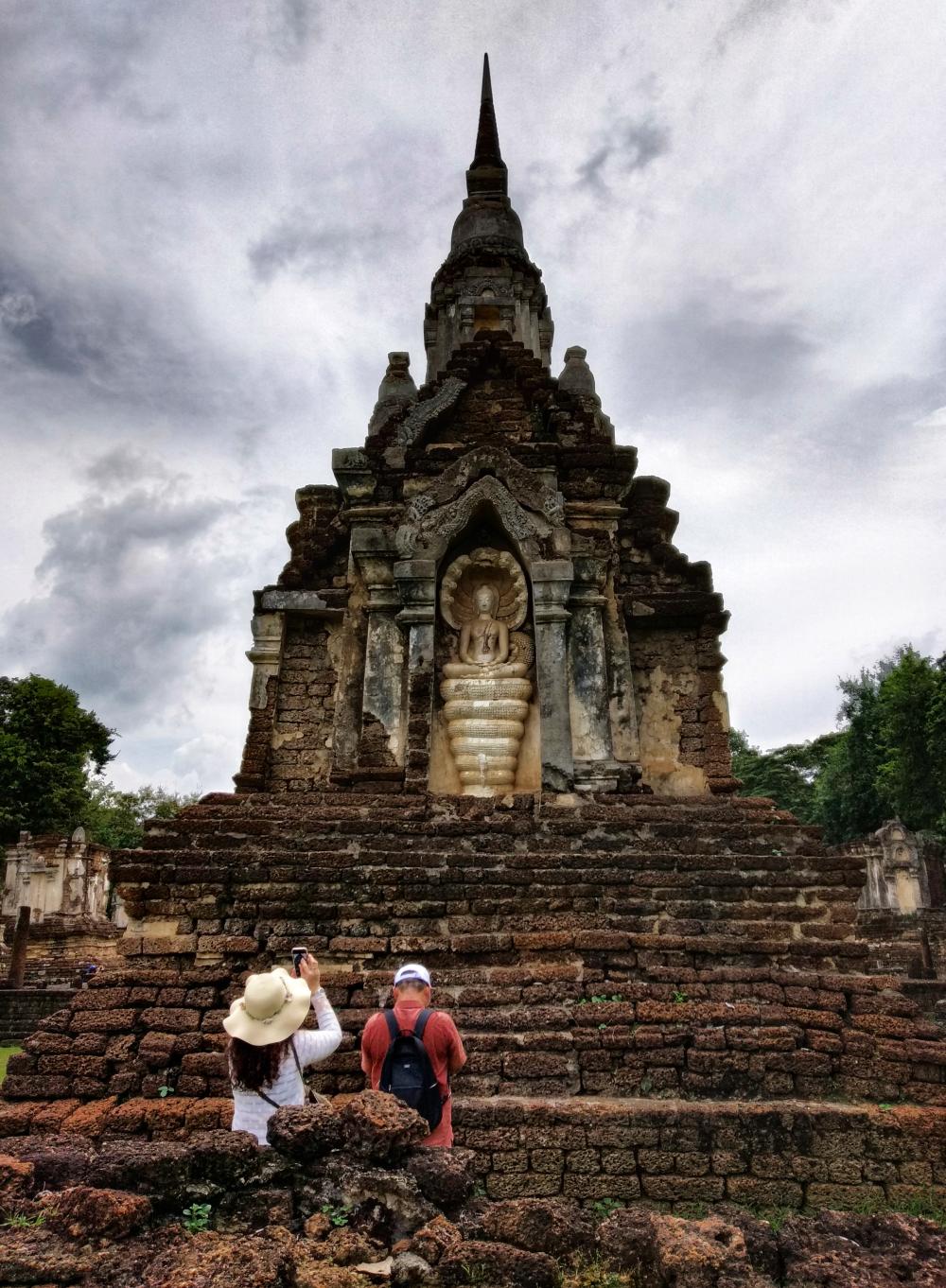 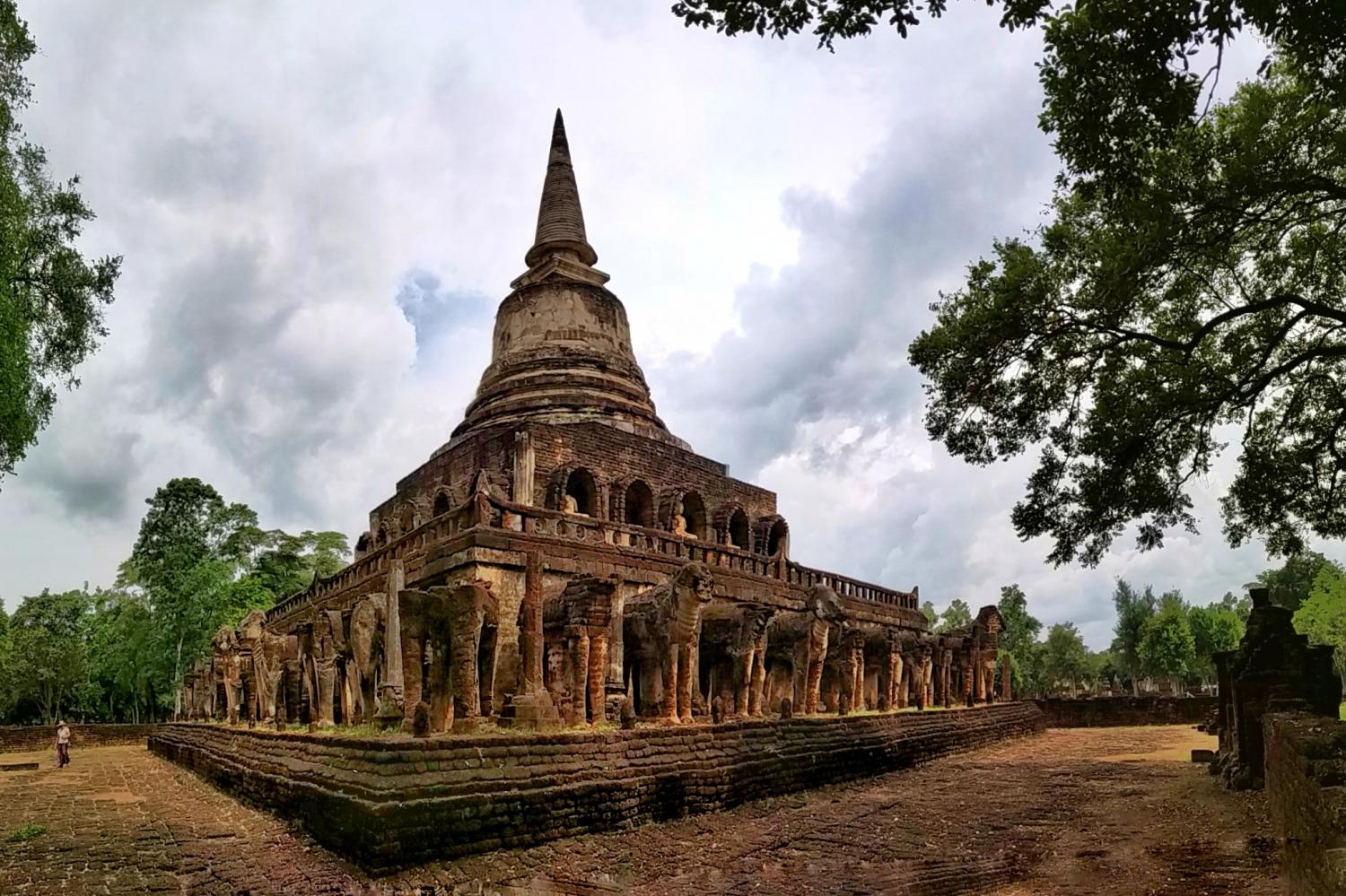 Wat Chang Lom and the adjacent Wat Chedi Chet Thaeo are among the most important monuments within the walls of the ancient city of Si Satchanalai, now a historical park. Wat Chang Lom, situated about 3km west of Wat Phra Prang, is named after its main pagoda built atop a tall square base surrounded by elephant statues facing outwards. A number of stupas in the North were built in this fashion. But it's only here where almost all of the elephants protrude from the base. At Wat Chedi Chet Thaeo, you'll find several pagodas built in different styles, from Sukhothai to Lanna and Bagan in what is now Myanmar. Such a collection of architectural influences reflects the commercial and cultural links between Si Satchanalai and other major settlements. 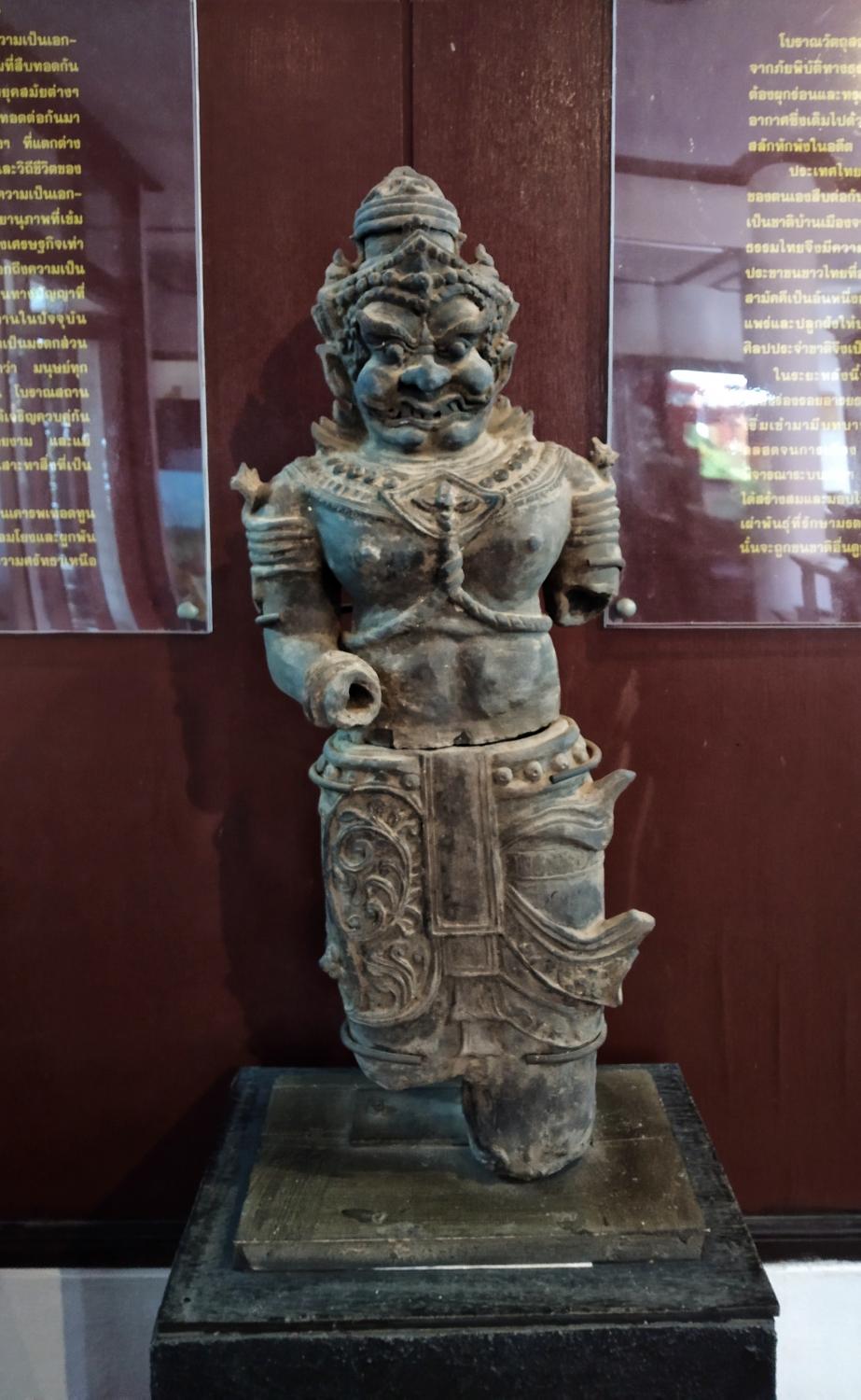 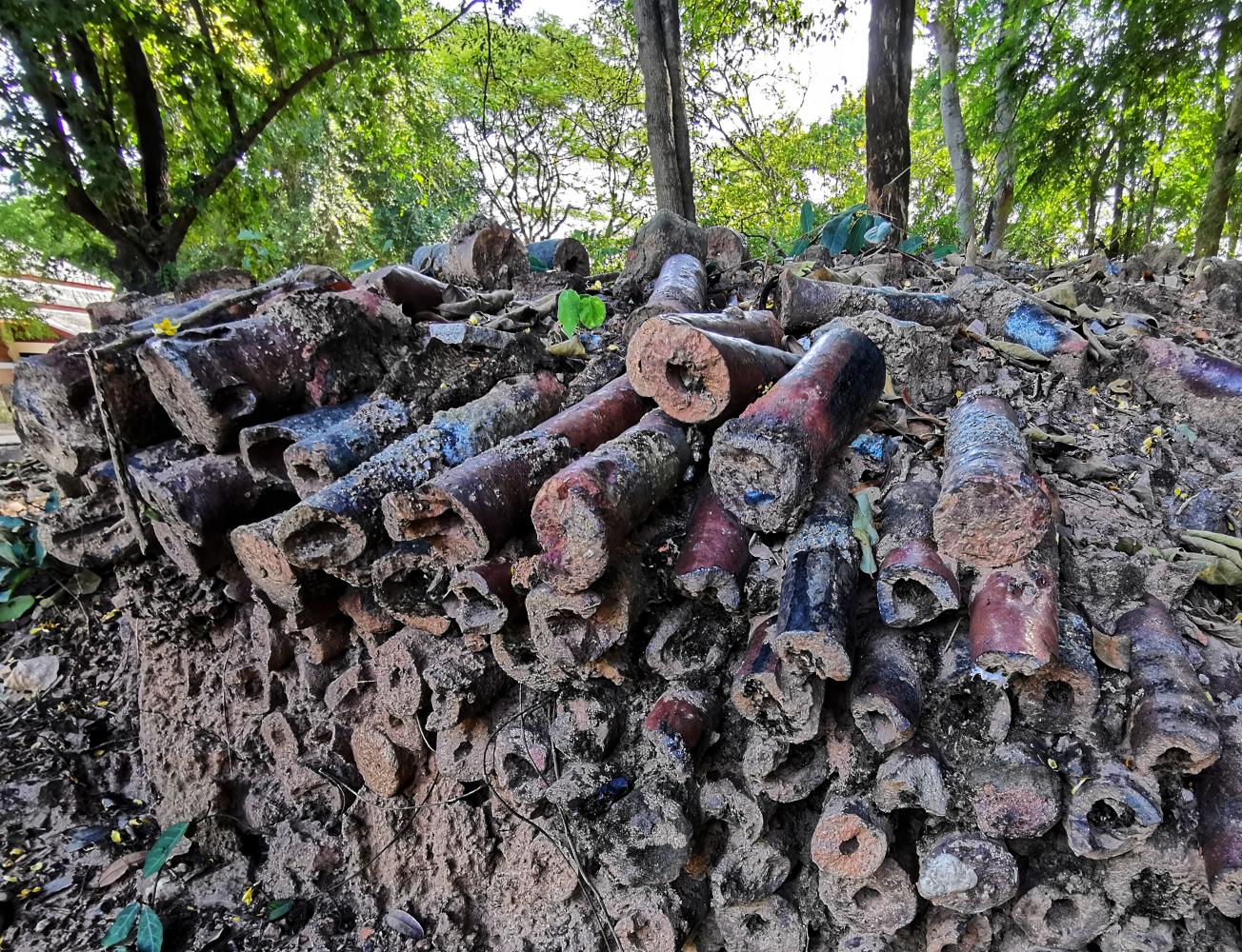 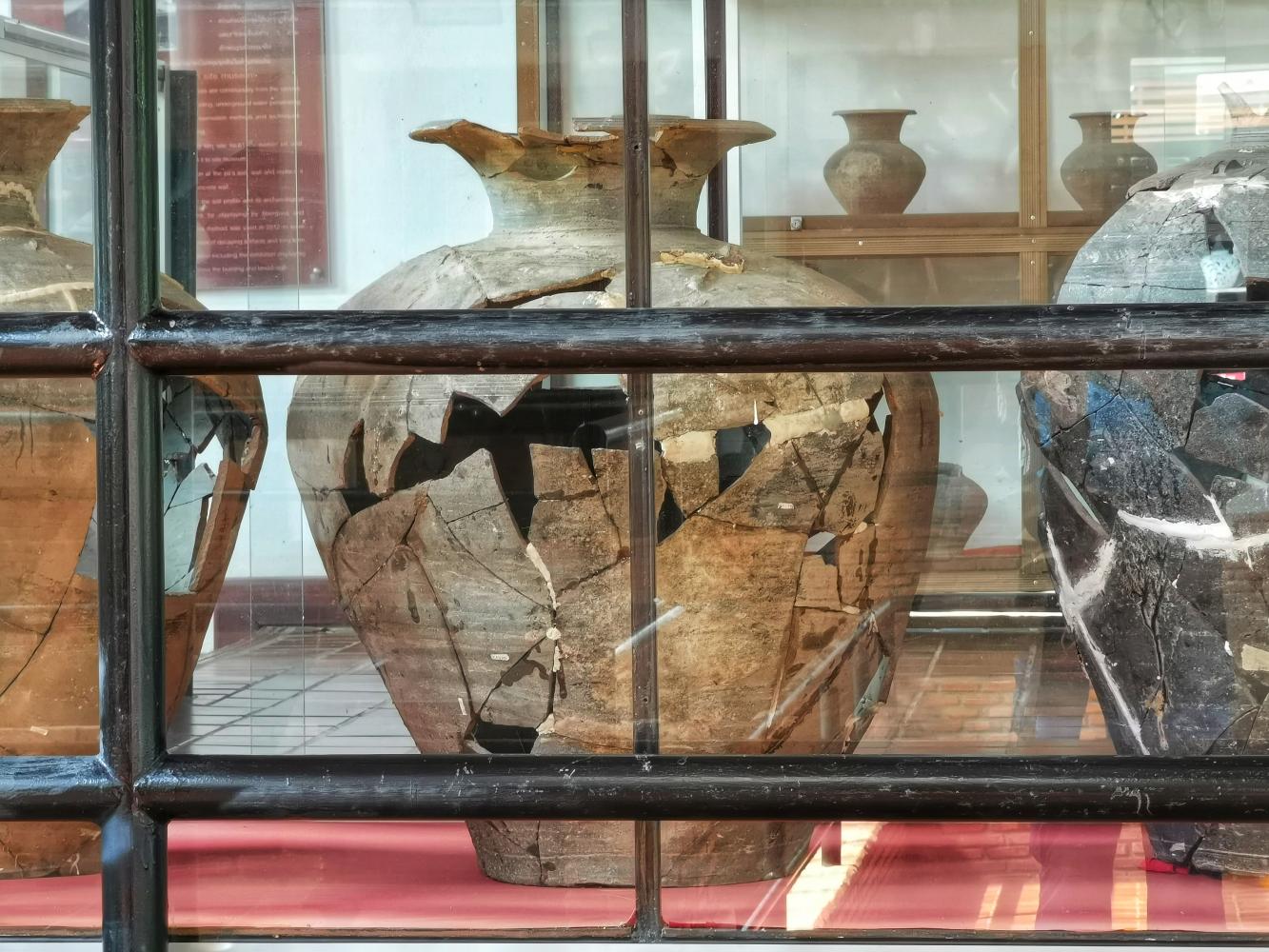 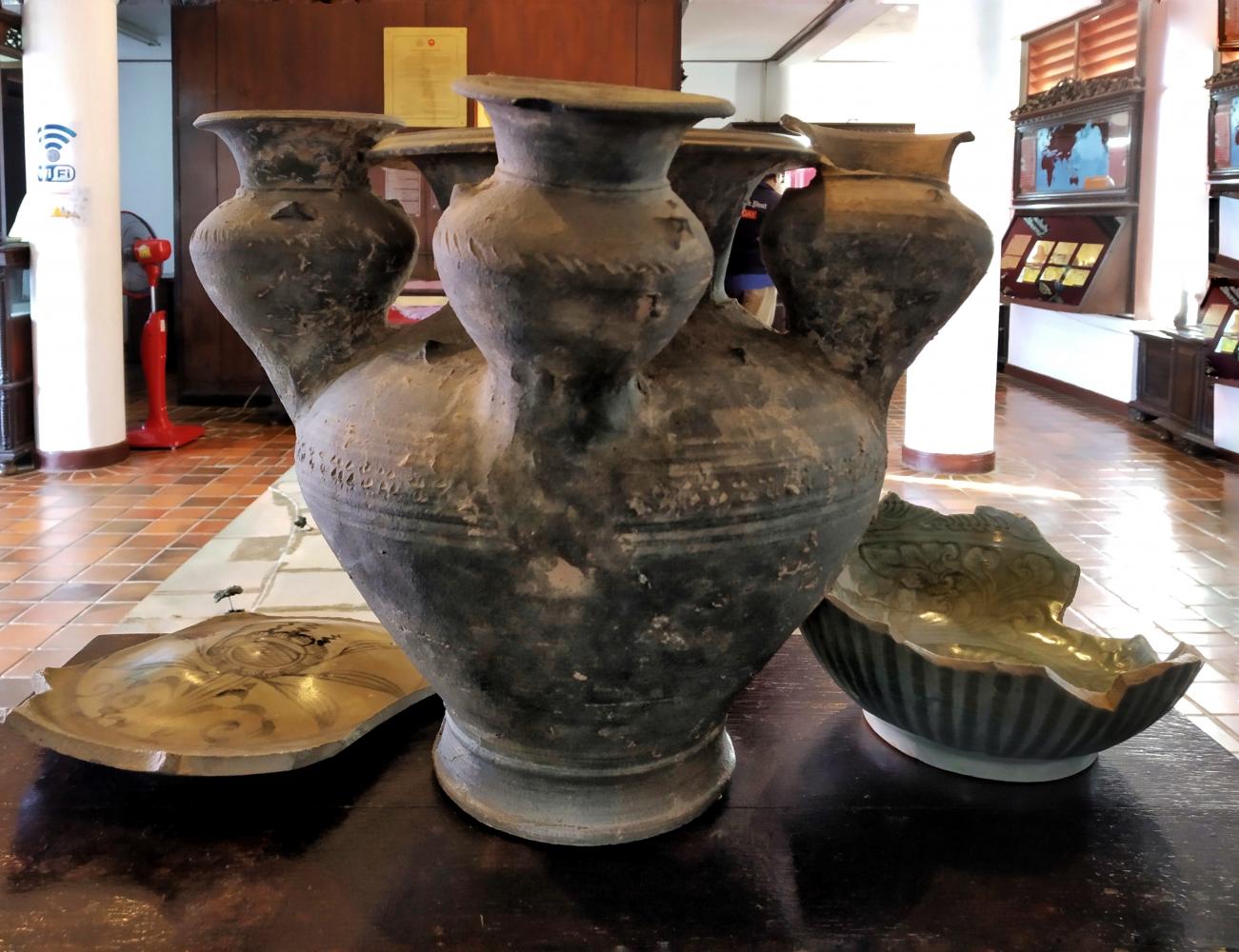 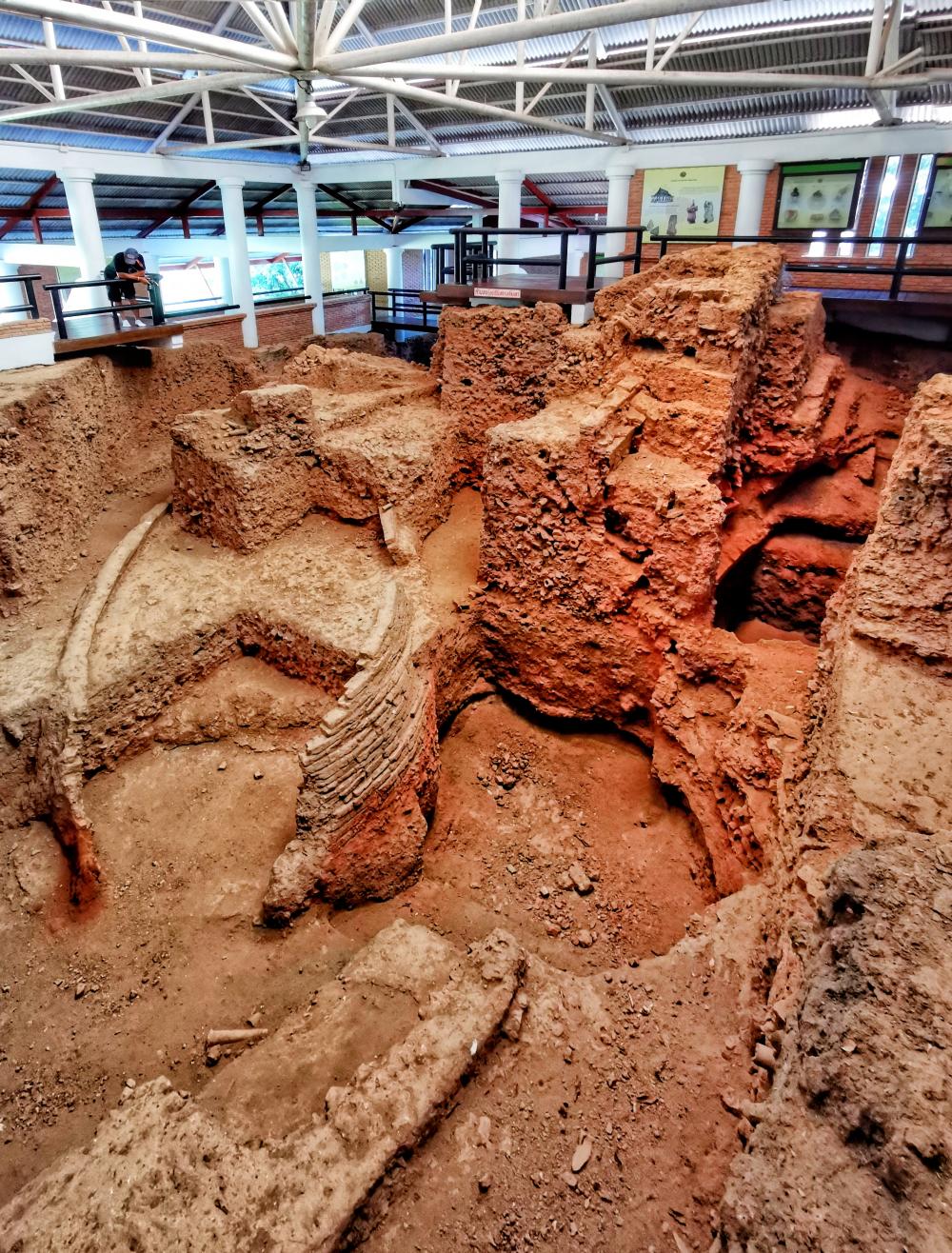 A few kilometres northwest of Si Satchanalai ancient city, excavations have uncovered many kilns left from the ceramic industry that boomed here during the 15th century and first half of the 16th century, when Si Satchanalai and Sukhothai were under the rule of Ayutthaya. During this period, pottery and other ceramics from Si Satchanalai (by this time was also known as Sawankhalok) were sent to Ayutthaya and exported to Japan and islands that are now Indonesia and the Philippines. Some of the sites currently serve as conservation and study centres for those interested in Sangkhalok ware (the name is a simplification of the word Sawankhalok). At many kiln sites, you'll find lots of thick stoneware tubes. These were a type of setter used to support pottery in the kiln's firing chamber. 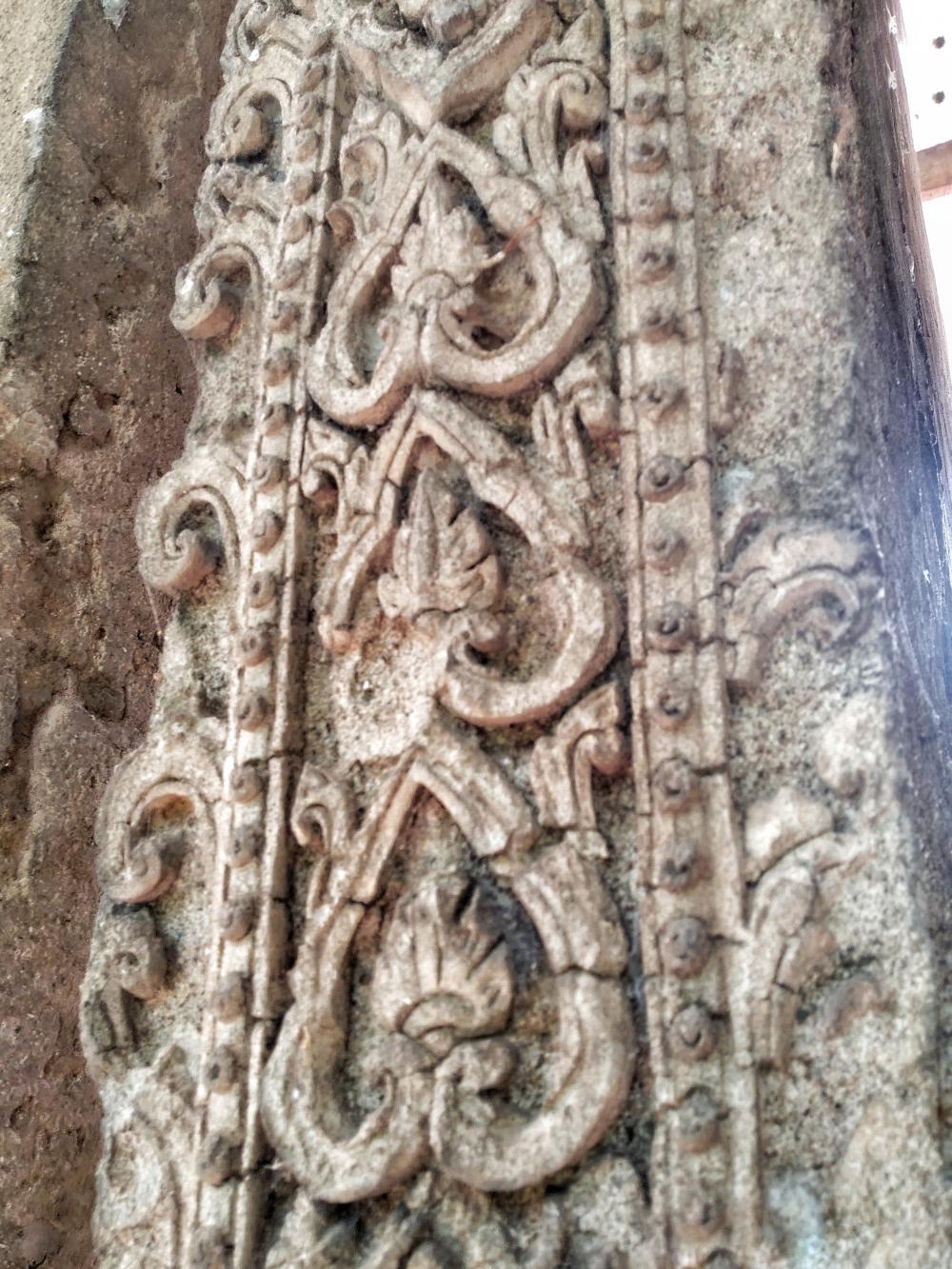 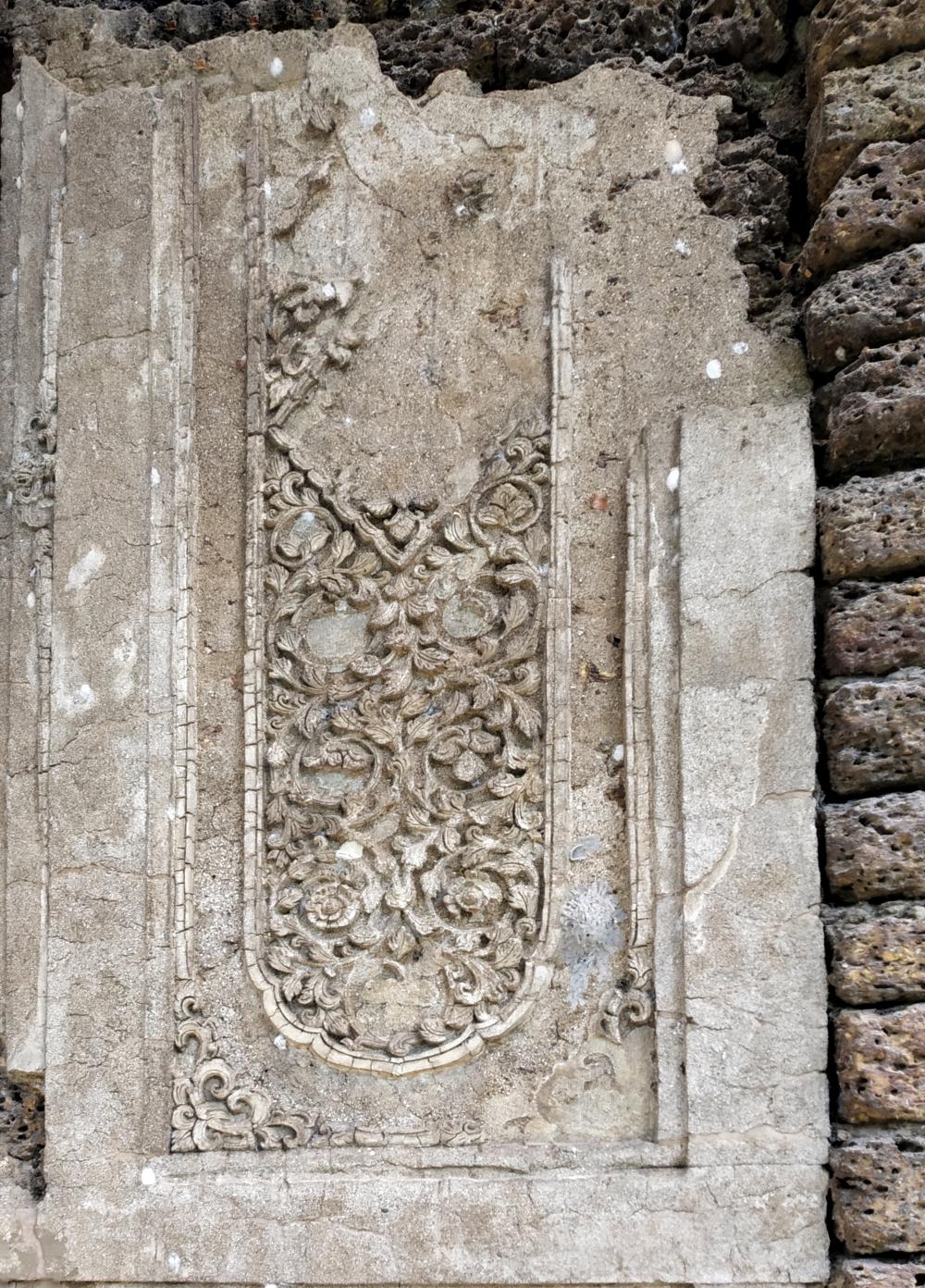 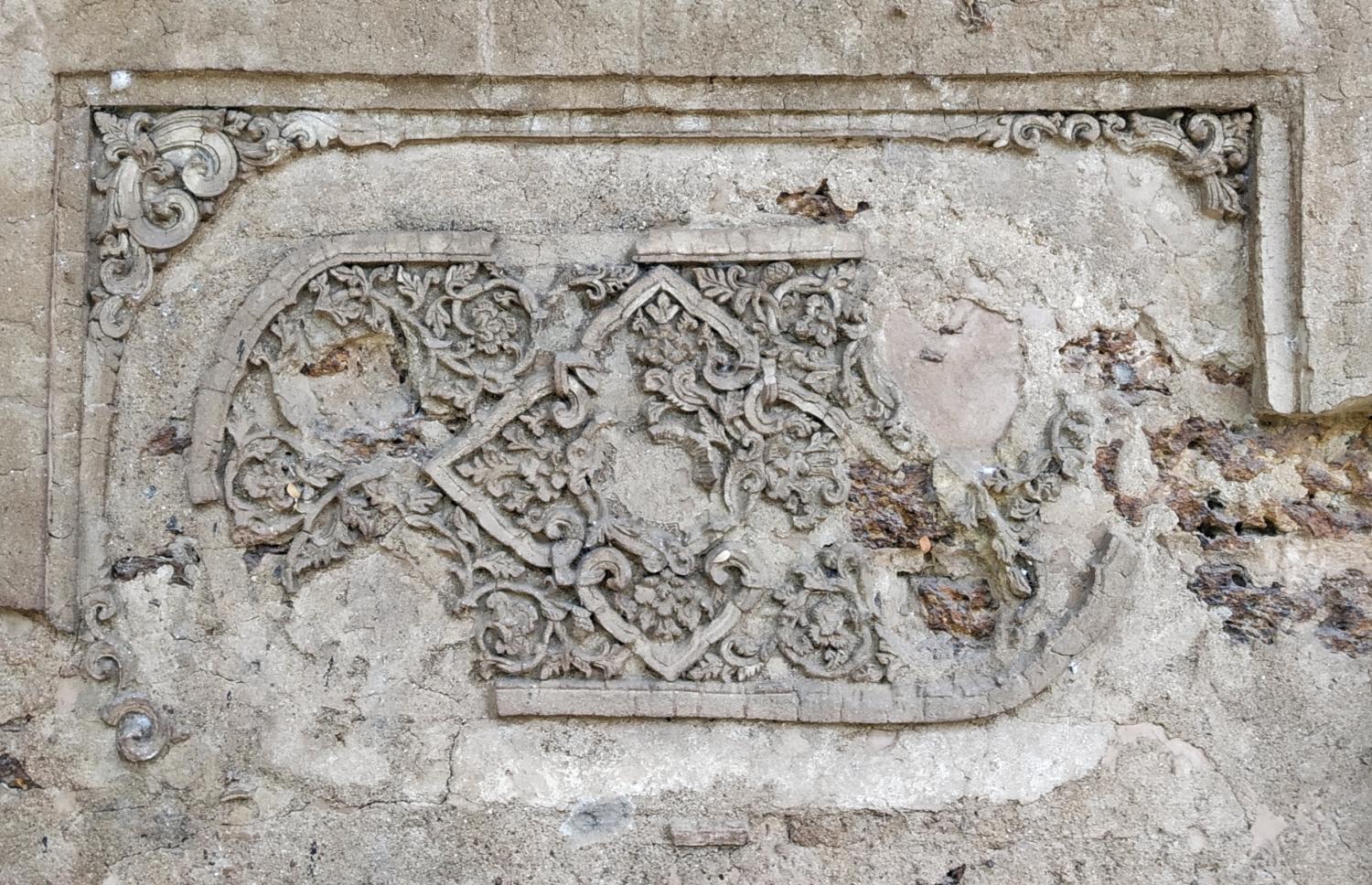 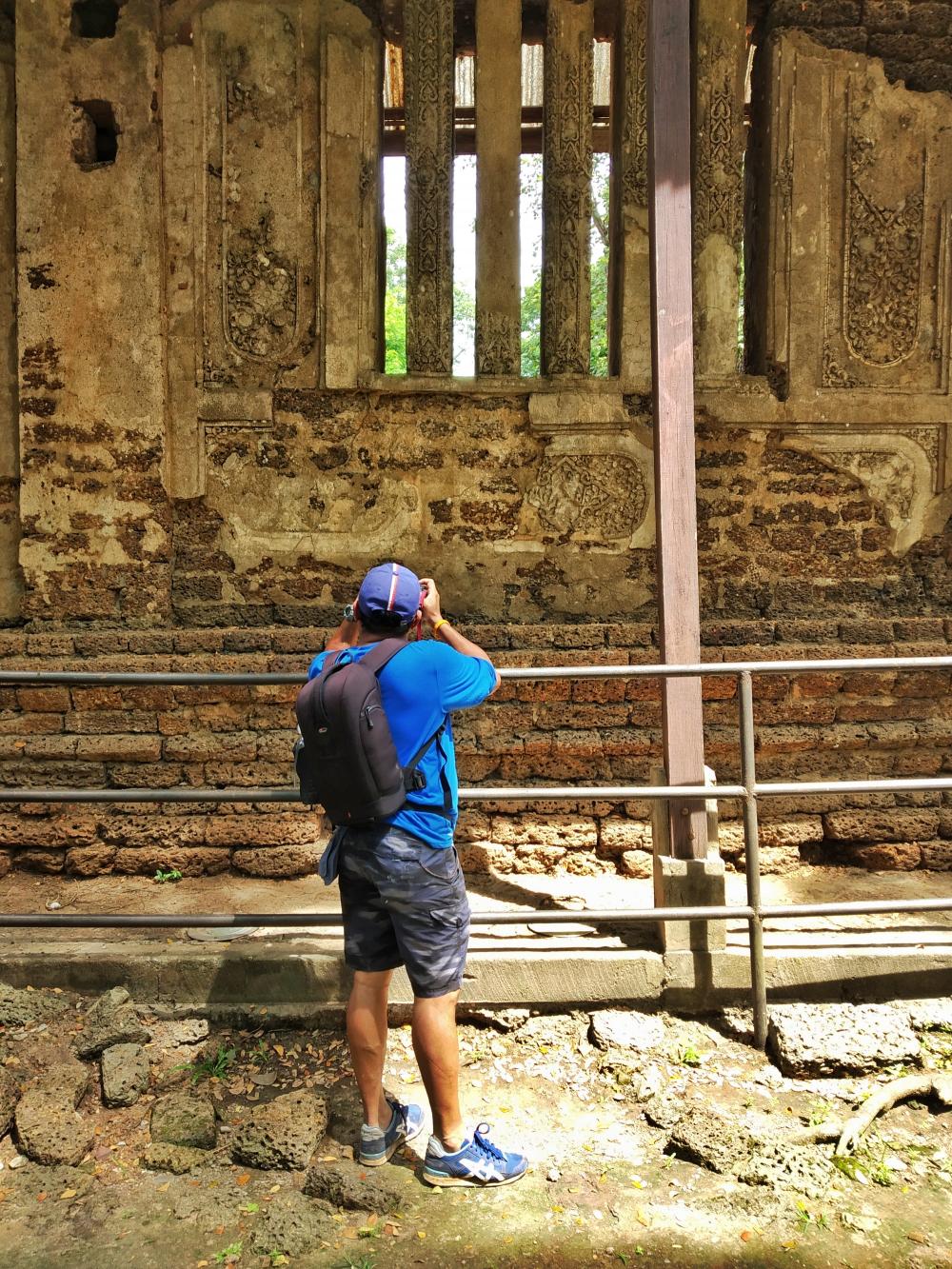 A short walk from Wat Chang Lom and Wat Chedi Chet Thaeo, are two more temples, the furthest of which is Wat Nang Phya, built during the Ayutthaya period. The temple is known for remnants of delicate stuccowork that can still be seen on the wall of its prayer hall. The design of the stucco shows influence from Lanna and China. 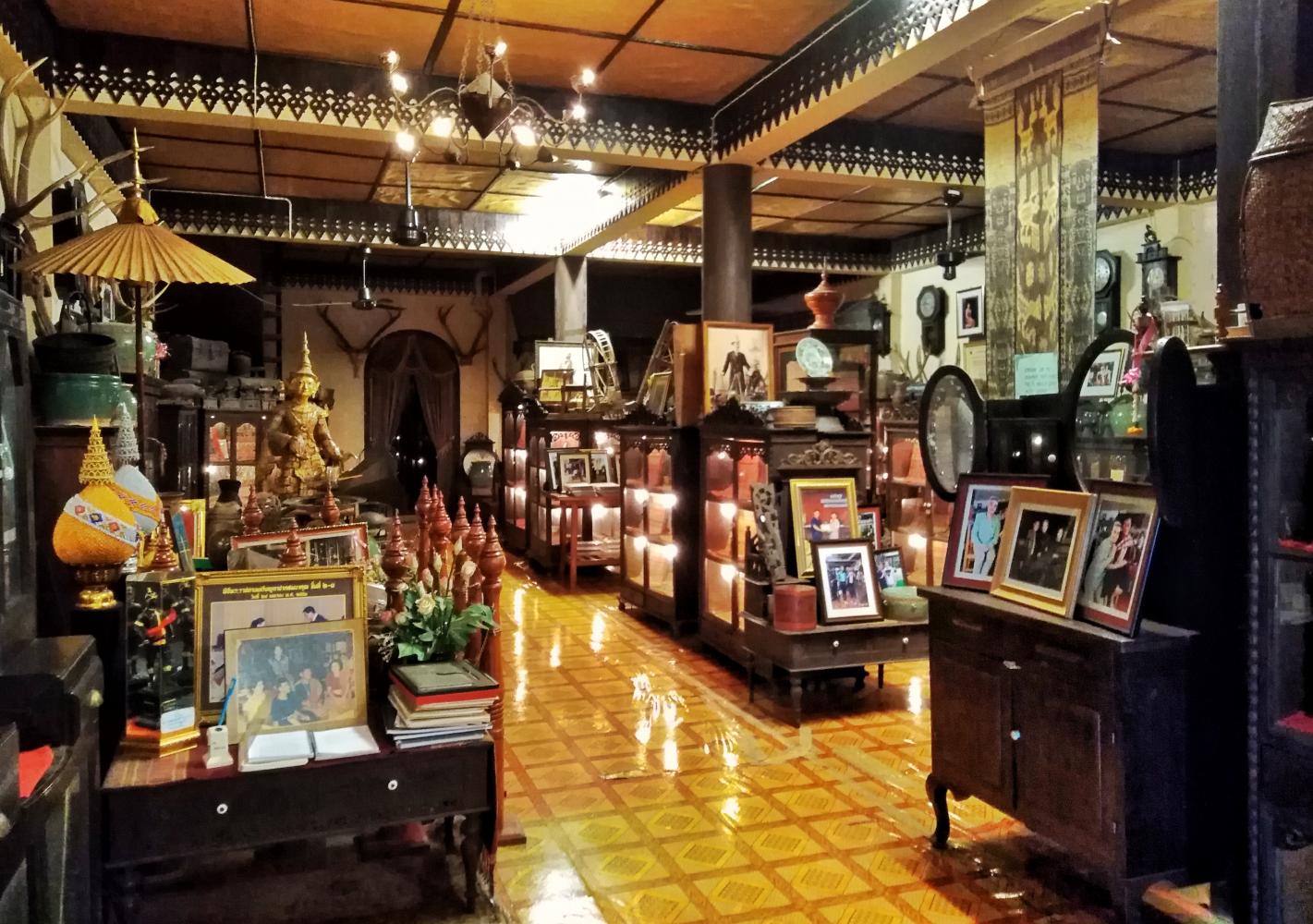 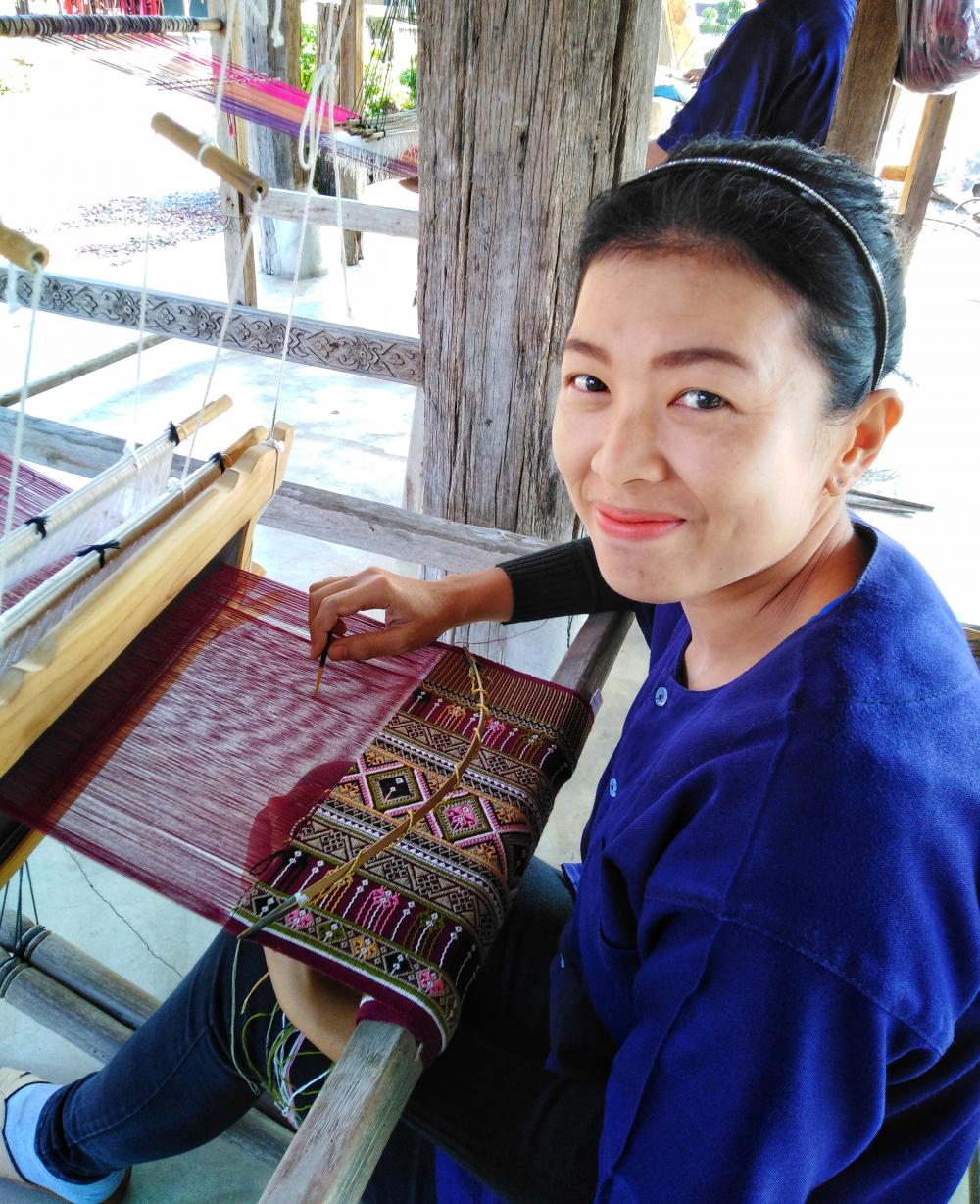 Si Satchanalai is also known for pha sin tinchok, traditional hand-woven fabrics with colourful symmetric patterns. A good place to learn about this fascinating tradition is Sathorn Gold Textile Museum in tambon Hat Sieo where a fine collection of cloths from Si Satchanalai and other locations is exhibited. Some of them are almost a century old. The museum also boasts a variety of antiques and old tools. 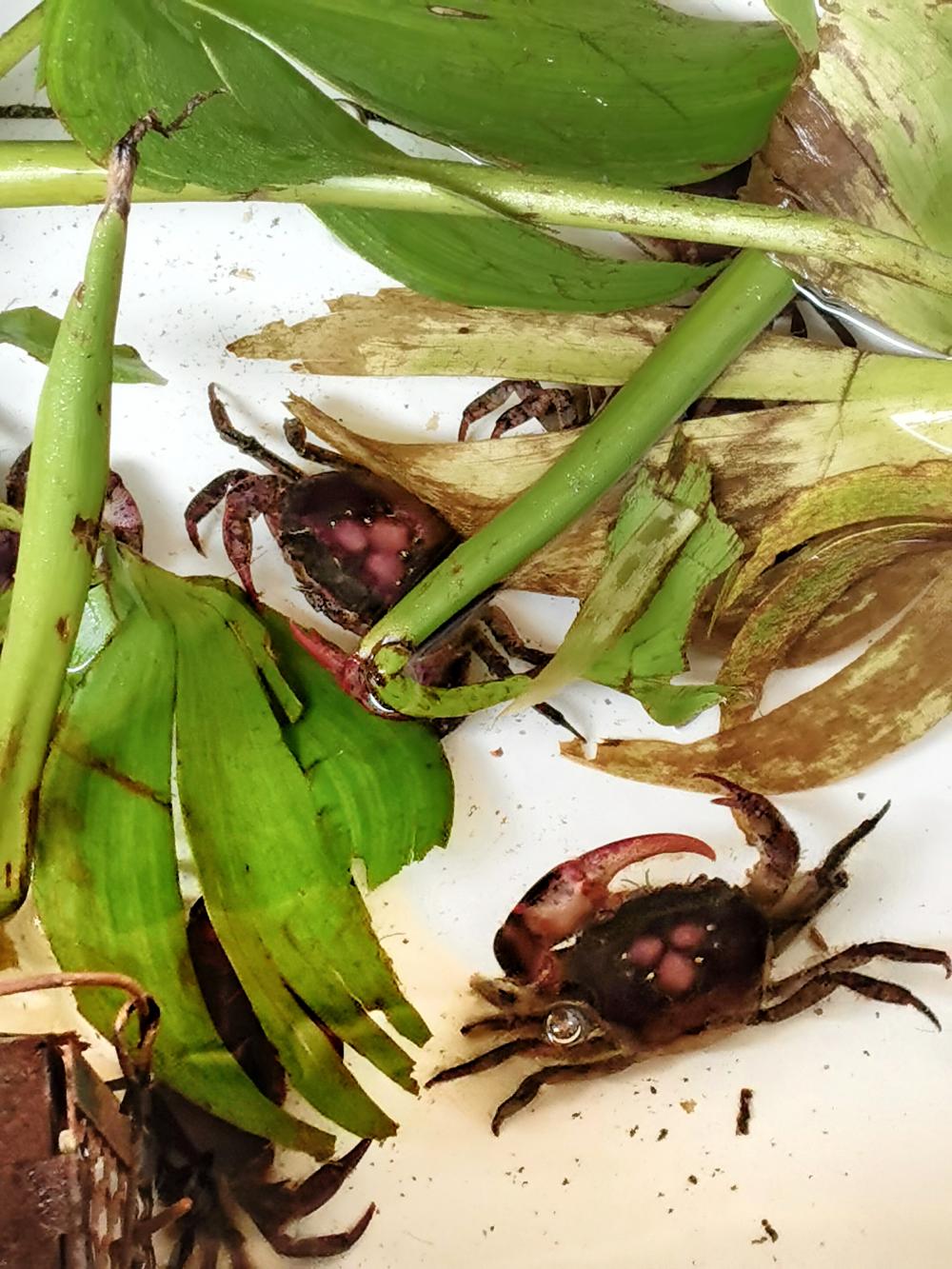 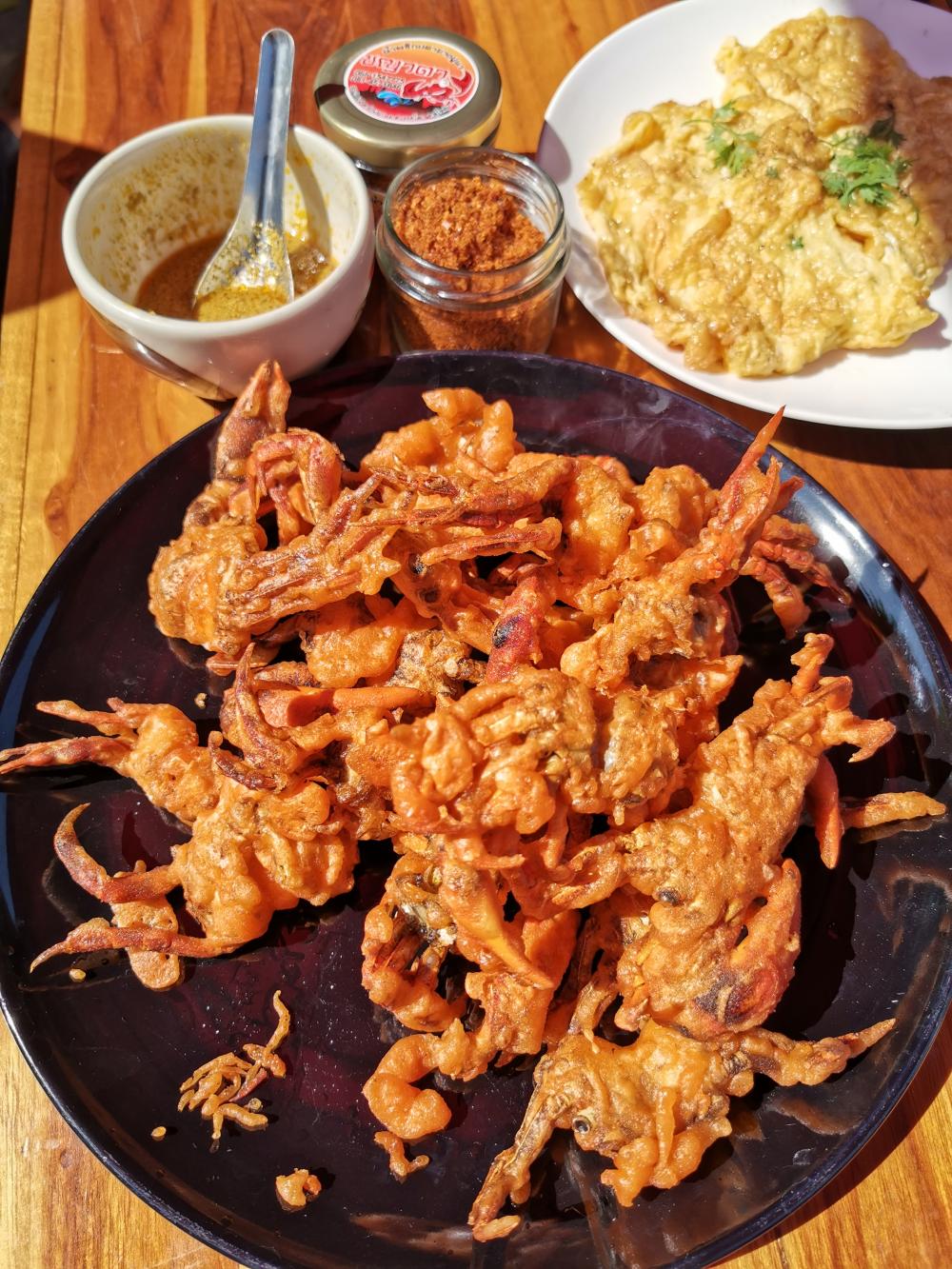 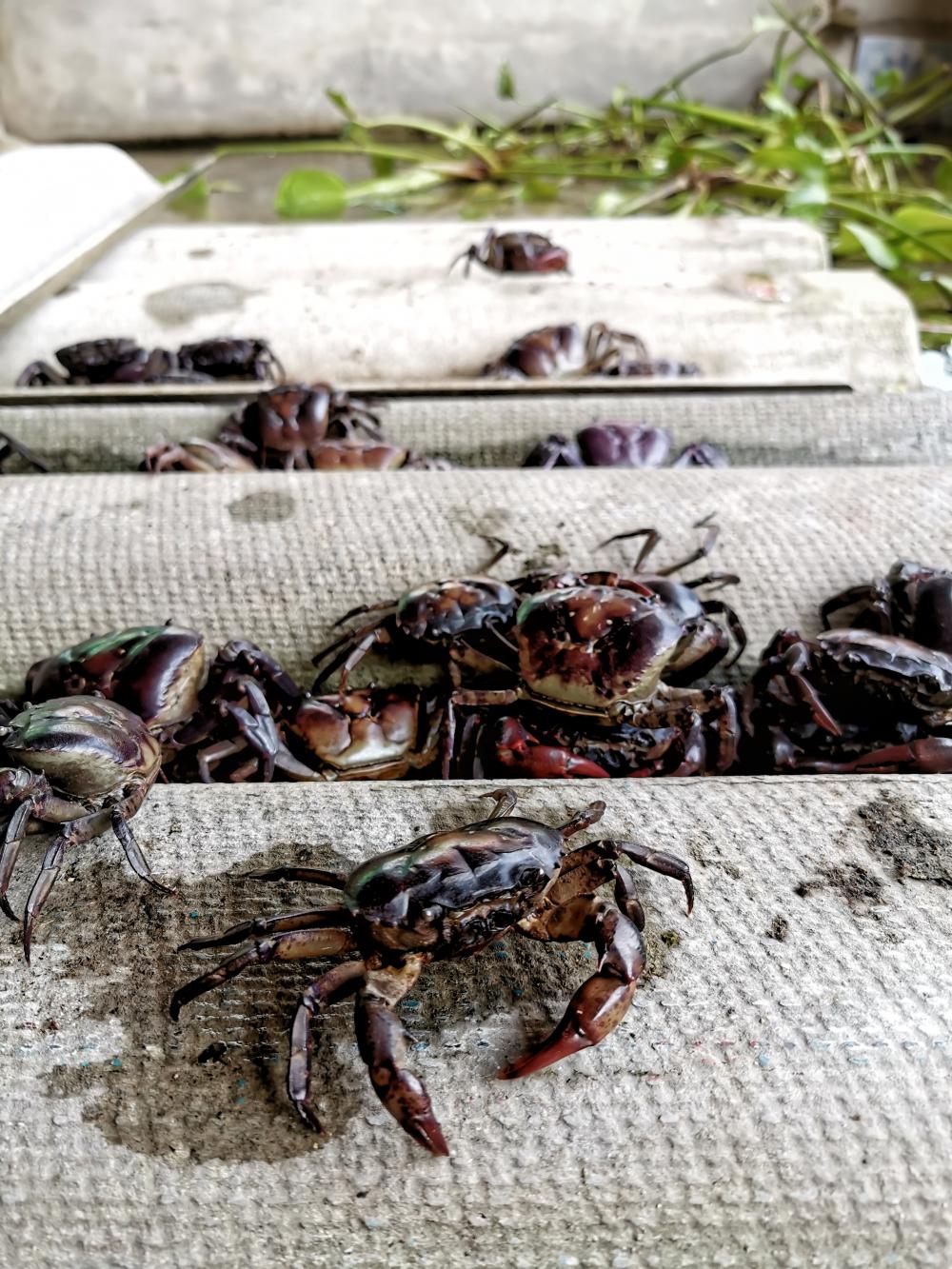 In the town of Sawankhalok, between Si Satchanalai and Sukhothai, as I was looking for somewhere to eat, I came upon a ricefield crab farm. I must admit I had never known that these freshwater crabs, a major ingredient of som tam pu, are farmed commercially, so I was excited. The place is called Chayada Farm. The young family that runs it told me that there are several such farms in the country but theirs is different because they raise the crustaceans in clear tap water. This clean environment and chemical-free farming method means the crabs are safer to eat. I told them I had never eaten a pu na (ricefield crab) before because I was afraid of parasites, but having seen their farm I was ready to try. They prepared some dishes for me. After a delicious meal, these kind folks refused to accept my money. It took a while to convince them to take it. 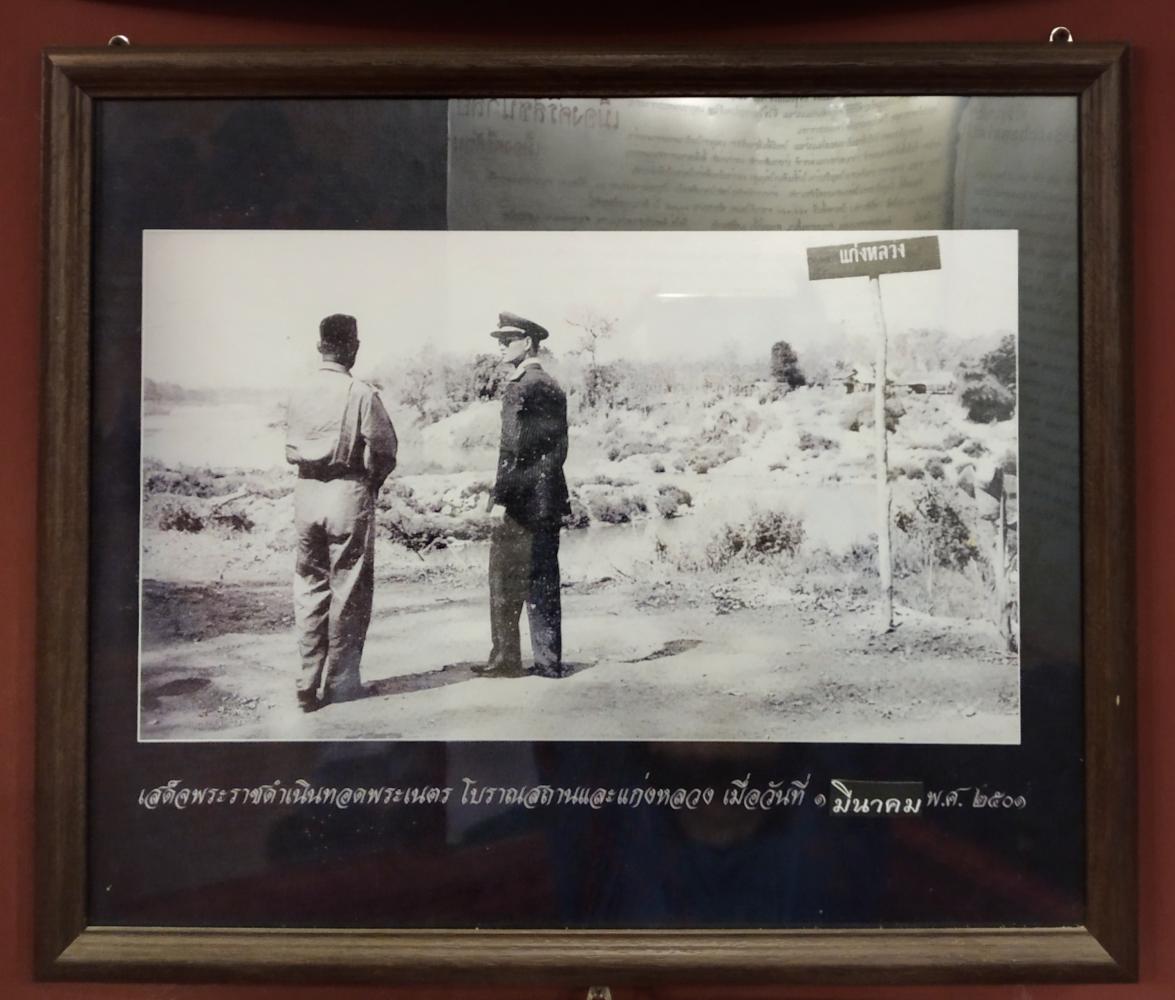 Kaeng Luang is a rocky section of the Yom River that runs on the east side of Si Satchanalai Historical Park. During the Sukhothai and Ayutthaya periods, the rocks served as a natural weir storing water for the townspeople during the dry seasons. However, over a century ago some of the rocks was blasted away to facilitate log transportation from Phrae further upstream to Bangkok. Kaeng Luang was the first site in Si Satchanalai that King Bhumibol visited. 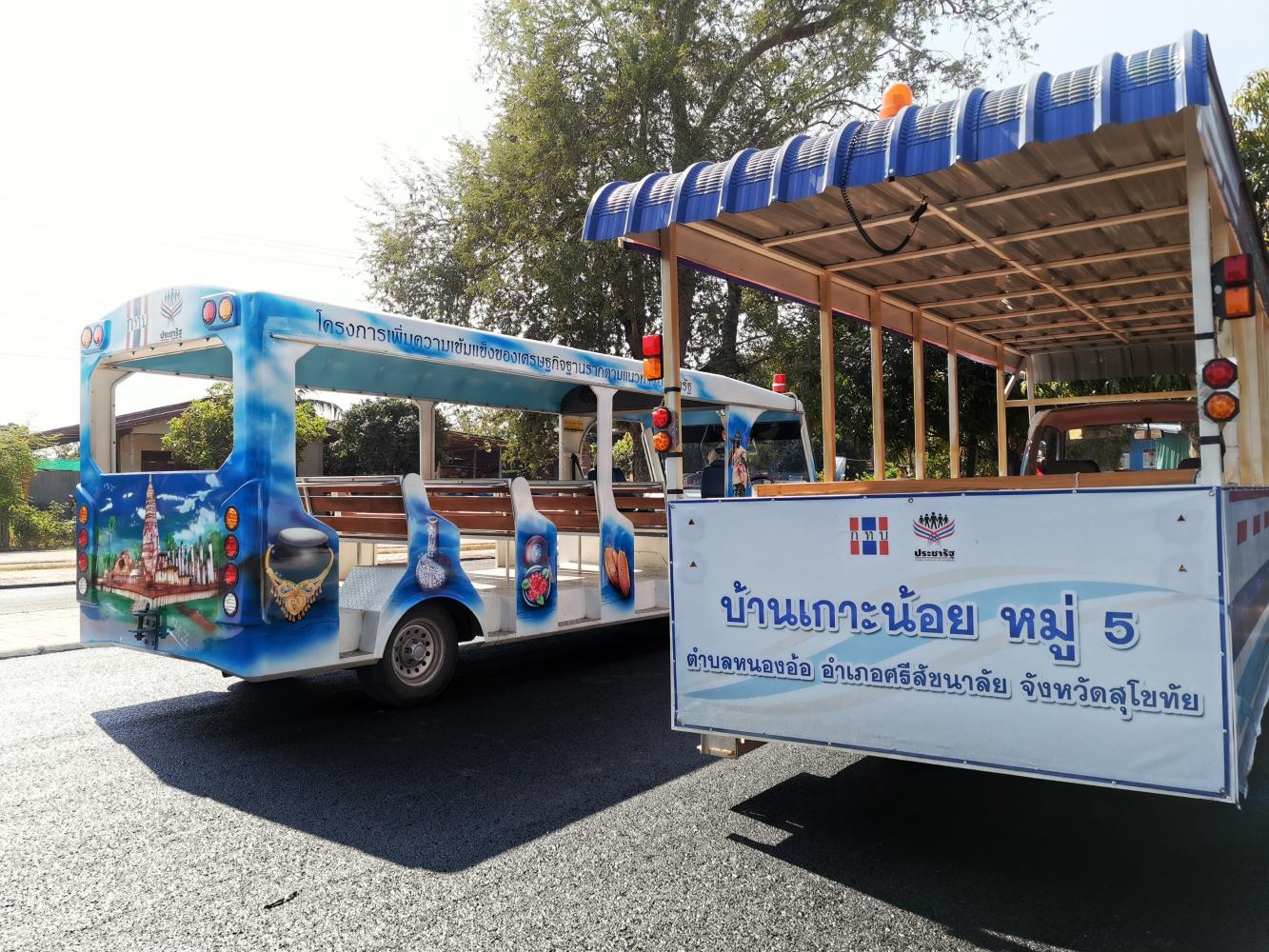 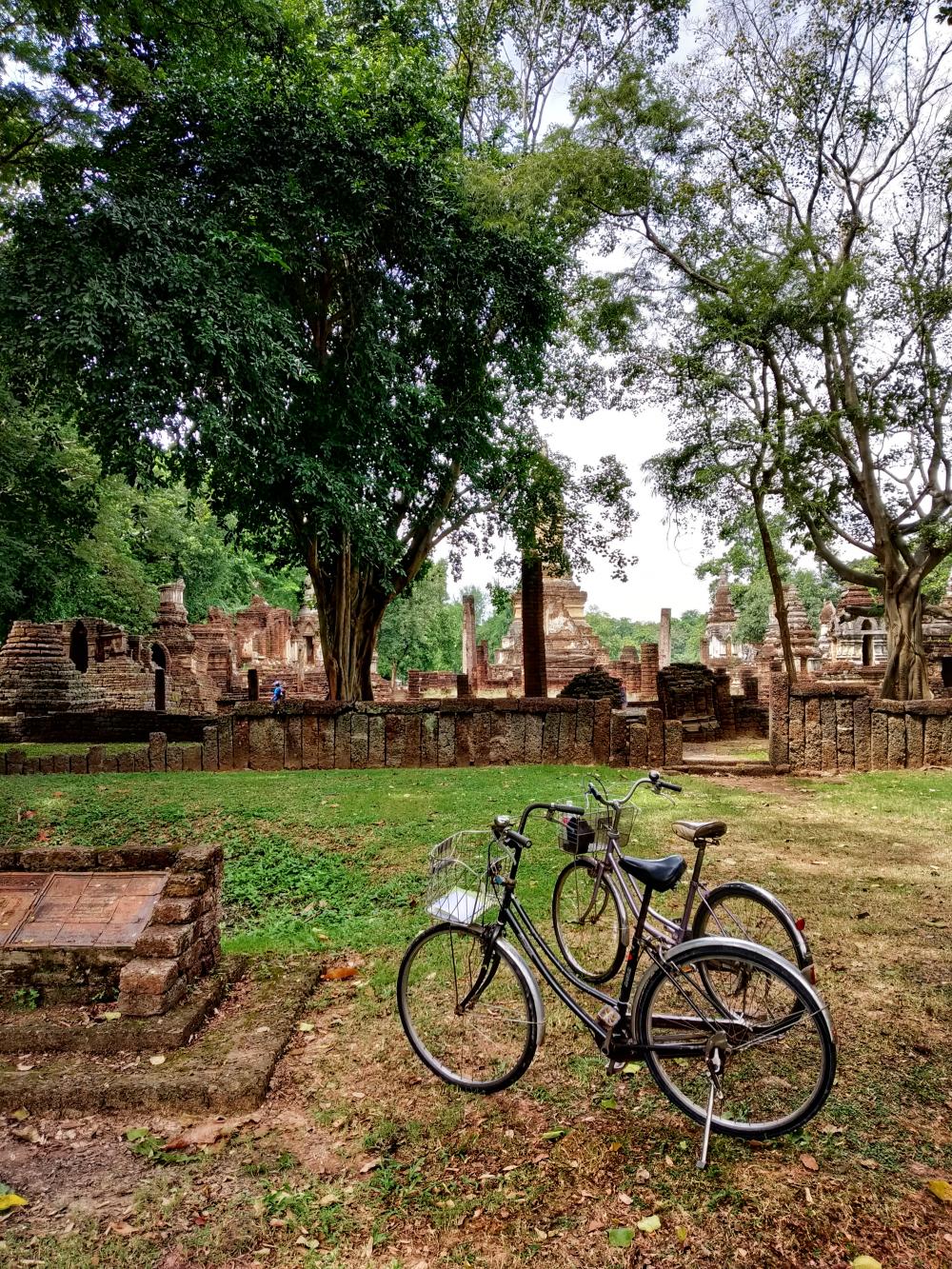 Rental bicycles make it easier to explore the historical park and nearby areas on your own. But if you come in a big group, or don't mind joining with strangers, guided tours by the locals on faux trams are available.