These legless turtles are no mutants
Life
Social & Lifestyle

These legless turtles are no mutants

Injured by fishing nets and other sea debris, a pilot project is creating prosthetic flippers for the endangered creatures

A mountain of sea waste has ruined marine ecosystems from south to east. During October 2018 to September last year, some 150 sea turtles and 67 dolphins were found dead on the beaches of Rayong, Chon Buri, Chanthaburi and Trat, according to records from the Marine and Coastal Resources, Research and Development Center, the Eastern Gulf of Thailand (MCRRDCE). 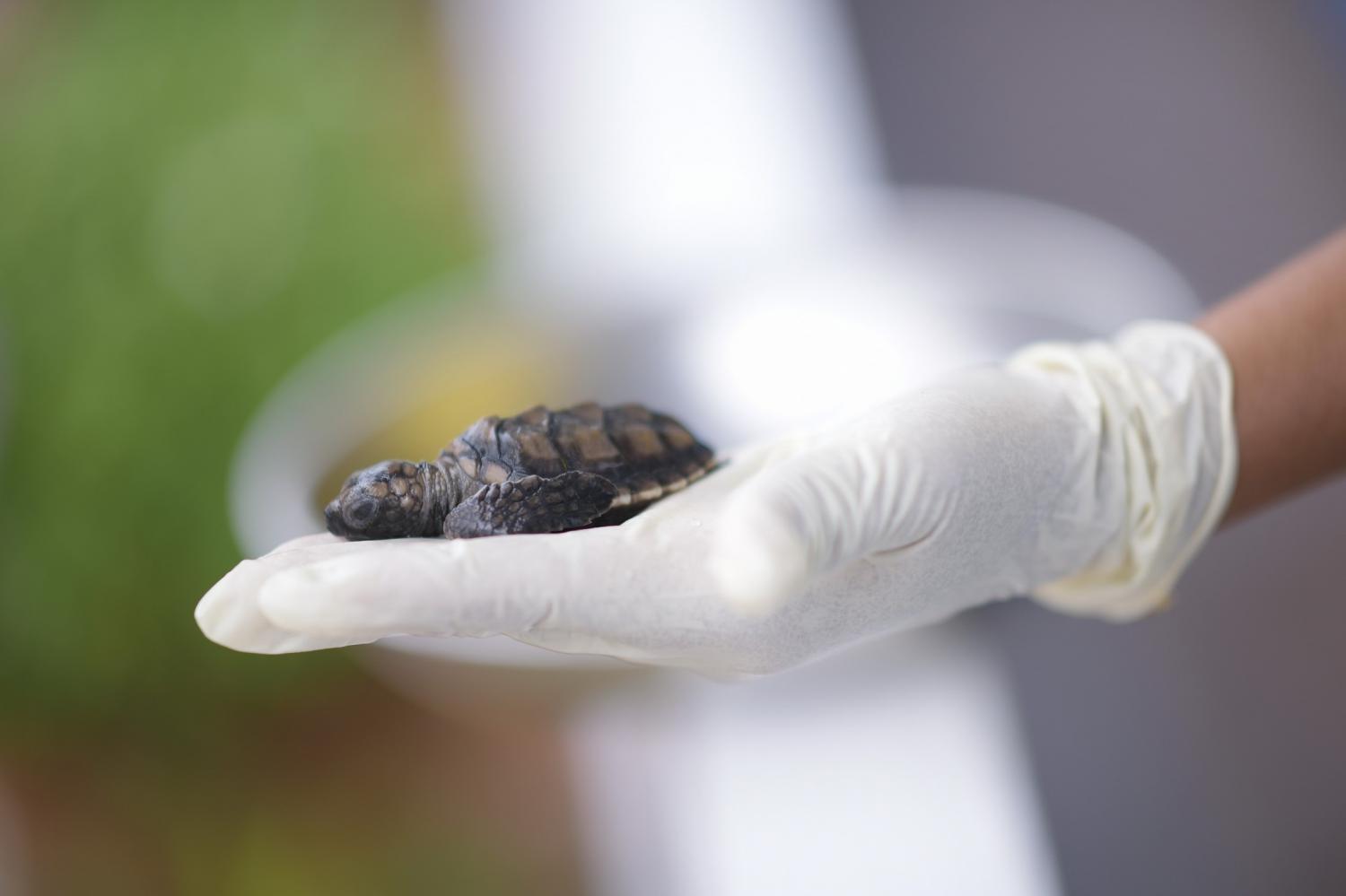 Each month, there are around 30 sea turtles injured and killed by sea debris -- 19% from fishing nets. With an increase of disabled sea turtles in recent years, this is a reminder that the marine ecosystem is being damaged because sea turtles have played a major role in manipulating seagrass and coral reef systems for more than 200 million years.

Aware of this crisis, watch company Citizen has launched a campaign called "Give The Better Life", in which some proceeds of the sale of Citizen Fugu Promaster Limited Edition chronographs will go to the MCRRDCE for developing advanced prosthetic flippers for sea turtles.

"Our centre covers the sea and beaches in Rayong, Chanthaburi, Chon Buri and Trat, spreading almost 600km. We have conducted research to rehabilitate the marine ecology by breeding sea turtles. Because of the sea waste, we've found more than 300 stranded marine animals on beaches," said Suthep Jualaong, director of MCRRDCE. 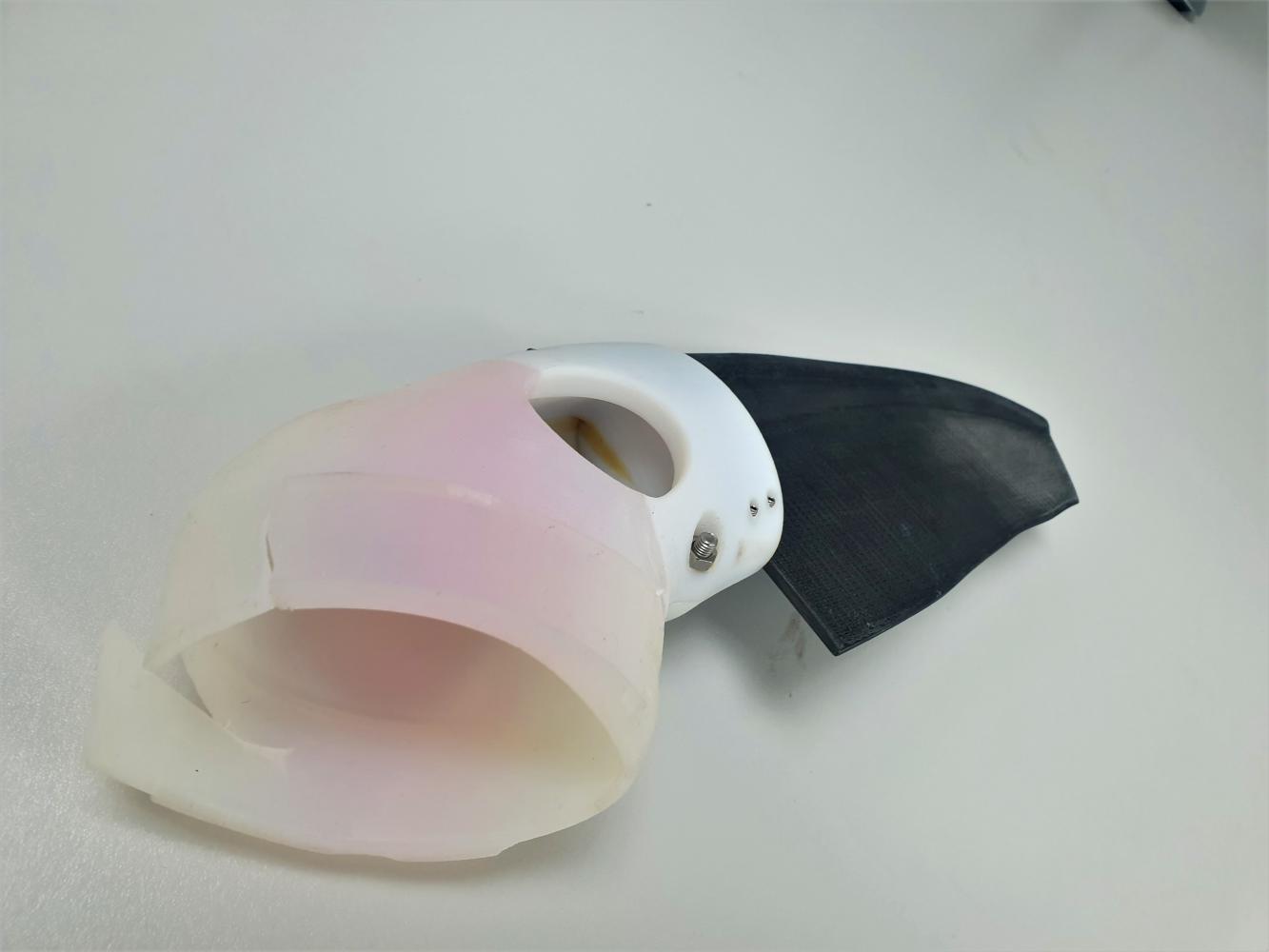 "Besides a mountain of microplastic, the ocean is blanketed with used fishing nets. For five years, the number of handicapped sea turtles has increased. Their flippers were cut while wriggling out of fishing nets."

Aiming to bring turtles back into the sea, this campaign is capitalising on the success of the Extreme Plus Prosthetic Flippers For Sea Turtles Project, a collective endeavour by the Phuket Marine Biological Center, Veterinary Medical Animal Research Center of Chulalongkorn University, PTT and PTT Global Chemical to help disabled turtles swim again.

"From birth, sea turtles have to encounter many natural obstacles, from laying eggs, that are eaten by predators like monitor lizards and birds. When swimming in the sea, they get eaten by bigger fish. Only some of them survive until they grew up and use their hard shell as a shield. They now suffer from injuries and disabilities from fishing tools that become marine waste. Each year, an average of 200-300 sea turtles are kept in the centre; these turtles cannot live in nature," said Assoc Prof Dr Nantharika Chansue, director of the Aquatic Disease Research Center.

The process costs up to 1 million baht using computerised tomography scans, 3D printing technology and polymer-based rigid opaque materials in creating a comfortable prosthetic limb that is safe both for animals and the environment. 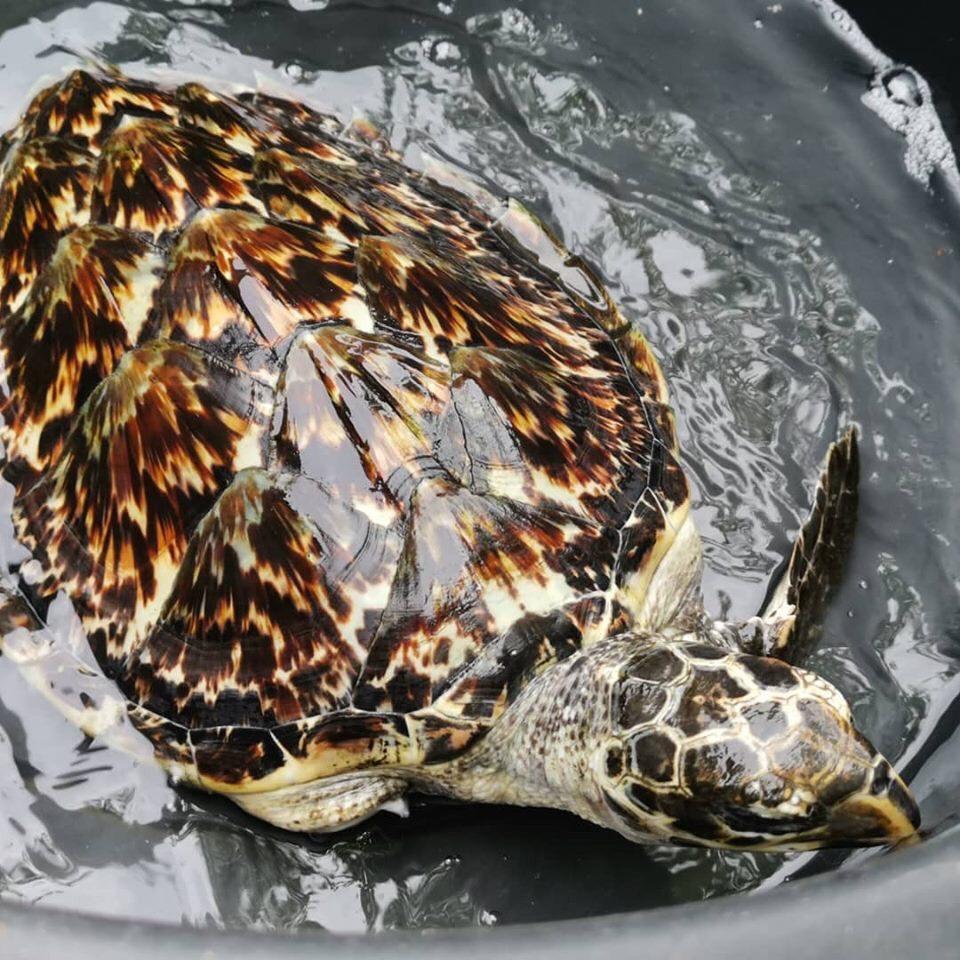 A two-year-old turtle that lost one of its legs waits for a prosthetic flipper. Photos courtesy of Citizen

Focusing on swimming efficacy, a practical flipper should be easy to control and comes with a self-cleaning surface. It needs to provide good balance, a powerful stroke and lifting force while allowing water to flow through the inside.

"It's similar to a prosthetic leg for a human. The challenge is that we need to produce a socket that fits a stump as well as a joint that can move as the original. We've used top-class materials to ensure a prosthetic flipper will last for a decade. It's adjustable so it's still functional even though a turtle can continue to grow," Dr Nantharika explained.

Apart from breeding hawksbill and green turtles, the MCRRDCE has turned the Sea Turtle Conservation Station on Man Nai Island in Rayong province into an experimental site for the prosthetic flippers project.

Occupying 131 rai, it was initiated in 1979 by Her Majesty Queen Sirikit after she noticed that local villagers hunted and ate sea turtles with the goal of educating people about aquatic animal conservation and solving ecological degradation.

Now, this royal project station provides a full medical treatment programme for wounded turtles and allocates 30 rai of land as a marine nursery for handicapped turtles. It also breeds seagrass and corals to expand food sources and habitat for turtles and other marine creatures.

"Now, there are around 40,000 green and hawksbill turtles in the Gulf of Thailand and we found 100 to 200 strand turtles in Rayong. We built a network with local fishermen, educating them on all the basics of how to rescue injured turtles. Meanwhile we have developed a mobile phone application to scan the turtle's face and check their health history," director Suthep said. 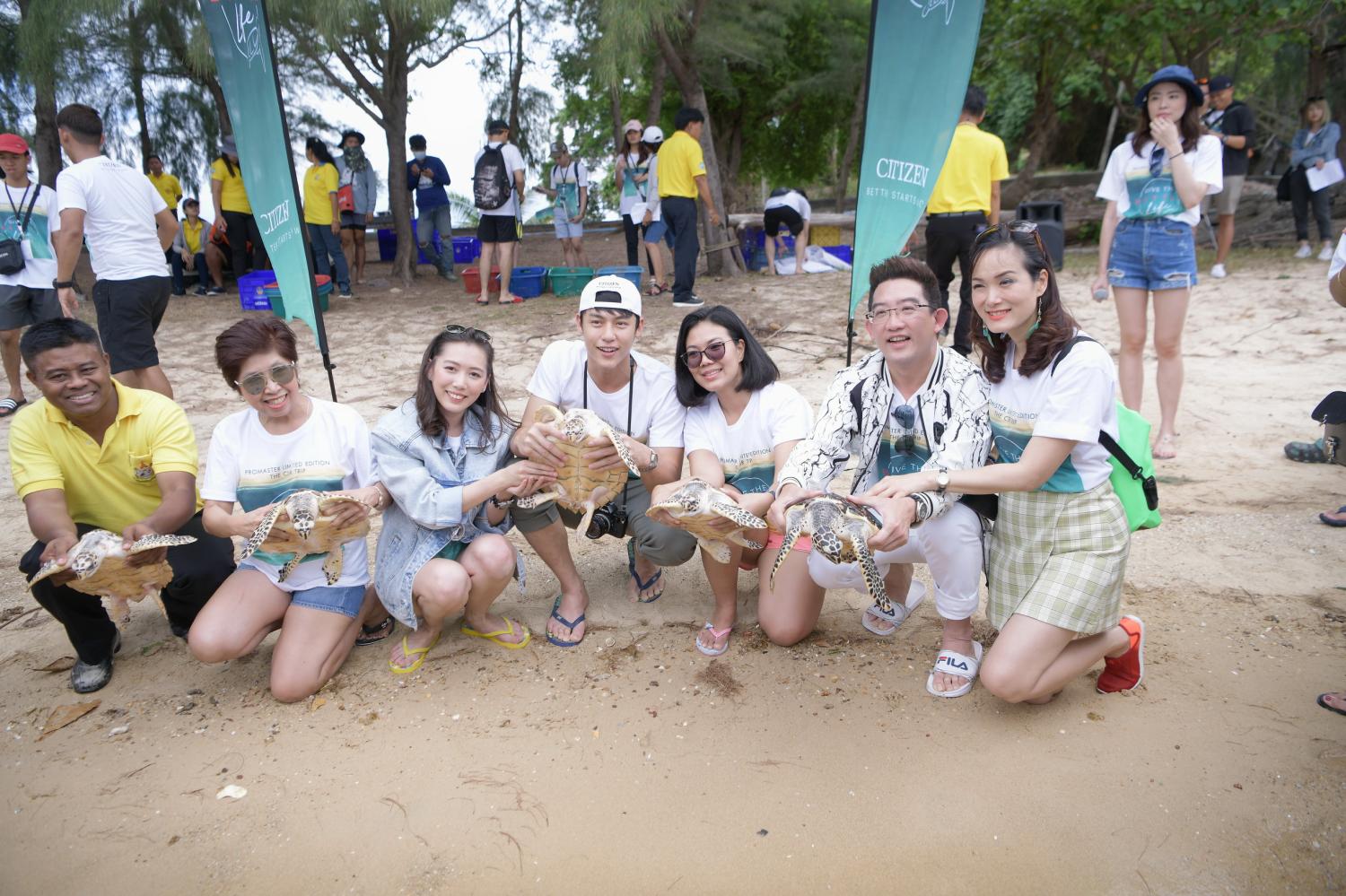 Citizen launched the Give The Better Life campaign to support the prosthetic flipper project for sea turtles run by the Marine and Coastal Resources, Research and Development Center, the Eastern Gulf of Thailand.

"The Man Nai station serves 30 ponds in different sizes to help injured turtles recover. We will consider their physical condition before releasing them back to the sea. Any turtle that can't return to nature, will stay on the island. We spend almost 1 million baht a year taking care of a turtle even though the centre has received a budget of 300,000 baht a year.

"For the prosthetic research project, we have to learn about turtle kinematics. They use a front leg to swim, so we need materials that are flexible, lightweight and durable."

One of the latest cases is a green turtle with just two flippers. It lived in a big basin because it can't swim. Its lungs were underwater all the time, resulting in its body deforming. But the luckiest one seems to be a two-year-old hawksbill turtle with three limbs. It's still young and its stump might fit a prosthetic flipper.

"This is to help renew the turtle before returning it to sea life. We want to educate people about the danger of marine waste that has a devastating effect on marine ecosystems and resources. We will continue to raise funds to help the prosthetic flipper project," said Vipawan Mahadumrongkul, managing director of C Thong Panich, sole distributor of Citizen in Thailand.

The Sea Turtle Conservation Station has joined hands with local residents and professional divers to host a series of cleaning day activities. It has collected 600kg of sea waste on the beaches and in the sea, mostly plastic bags, bottles, foam and fishing nets.

"We've raised sea turtles to learn about their life cycle and release 100 sea turtles to the sea a year. A sea turtle can live up to 100 years and can lay around 100 eggs at a time. That means it can produce more than 10,000 eggs throughout its life," said Somchai Monanunsap, director of the Sea Turtle Conservation Station on Man Nai Island.