A child holds her father's hand tightly while boarding a pedal boat. Before her is the large lake that runs along Khao Ngu limestone hills. Located in Muang district in Ratchaburi, the site was once a rock mining area. It has since been turned into a public park, now known as Khao Ngu Stone Park.

"The weather is pleasant. The wind is also gentle. Being near water makes us feel relaxed. It is hard to believe that the place was once a mining site," said the father.

Listed among the popular attractions of Ratchaburi, tourists from near and far visit the park for its picturesque views -- pale grey limestone hills stand tall against the blue sky and green water, with a vivid green line of trees that grow along the foot of the hills.

Various types of fish live in the lake. A friend of mine bought two packs of fish food from a vendor, who told us to return the plastic bags to his shop so that he would reuse them -- an attempt to reduce plastic waste.

From his shop, we walked a bit further to a suspended bridge which connects to a concrete walkway built along the shore of the lake. It ends at a viewpoint, a raised platform that can act as a rest area for visitors.

The name Khao Ngu means hills of snakes. Locals believe that the area was home to serpents before the site was mined for quicklime. After the site became a public park, a large sculpture of a black snake inflating its hood was erected at the entrance.

According to the Department of Mineral Resources, the Khao Ngu hills were formed in the Permian period about 248-290 million years ago. During the Dvaravati period (6th-11th century), the area was developed as a site of Buddhist worship. Evidence for this can still be found in some of the caves, like Tham Cham, Tham Chin, Tham Pha Tho and Tham Ruesi, which house Buddha images carved on the cave walls, resembling the art of the Dvaravati era.

More than two decades ago, Khao Ngu was abandoned after the rock mining concession was discontinued. Recently, the provincial office of Ratchaburi refurbished the site as a tourist attraction, building the long walkway and introducing the pedal boat service.

The best time to visit the park is in the morning or late afternoon when the Sun is not too strong. The place can get crowded on weekends. In addition to the lake, visitors come to check out the caves. Motorists and cyclists can drive or ride their vehicles inside the park for this purpose. Extra caution must be taken while riding inside the park because troops of monkeys sometimes sit or lie in the middle of the road and refuse to move. Many of them look for food from visitors although there are signs asking tourists not to feed them.

From Khao Ngu Stone Park, we drove for about 30 minutes on Road 3291 to another hill site called Khao Cha-ngum in Photharam district. We stopped at Khao Cha-ngum Royal Study Centre for Land Degradation Development to learn about the royal project of His Majesty King Bhumibol Adulyadej the Great. The centre has helped farmers in the area turn hard soil that once could not be used for cultivation due to land misuse into fertile land.

Once there, we jumped on a "tourist tram", a modified truck with wooden rows for passenger seats, to get a bigger picture of the centre. The site covers an area of 870 rai. It is very green due to the farmland, ponds and forested areas. The present view is totally different from how it looked in 1986, according to an old picture on display there. Back then, the soil was red and dry, while no trees could be seen on Khao Cha-ngum hill.

"King Rama IX initiated the three major concepts for the project which are: do not abuse the forest, do not abuse nature and reforestation without planting," said Orapin, a grade six student who was a volunteer guide.

"In 1986, the king suggested to have reservoirs built. He also grew vetiver to help increase soil moisture as well as trees in the project," she said.

Today the project farms 48 species of vetiver found in Thailand and other countries like Sri Lanka. The project also has rice fields and various plots for growing vegetables and herbs. Orchards are full of tall fruit trees like mangoes, santols and date palms. About 10% of the land is used for raising animals such as ducks, chicken, goats and fish, said our guide.

The rice, vegetables and herbs are used in the kitchens and also packed for sale to visitors. The project, which is run by Chaipattana Foundation, also grows sunflowers and allows locals living in nearby villages to sell their farm produce inside the project.

Our trip to Ratchaburi would not be complete without a visit to a ceramic factory that produces ong mangkorn, a big water jar with a dragon design, a famous product of the province.

We visited Rueang Khong Ong (Pottery Legend) in the provincial capital. It has been open for three years and houses a museum which charts the history of ong mangkorn. There is also a workshop for visitors to have a go at making a jar of their own.

Ratchaburi is about a two-hour drive from Bangkok, so day trips are possible. It is a good destination to bring family members, especially kids who will enjoy getting close to nature this coming Children's Day. 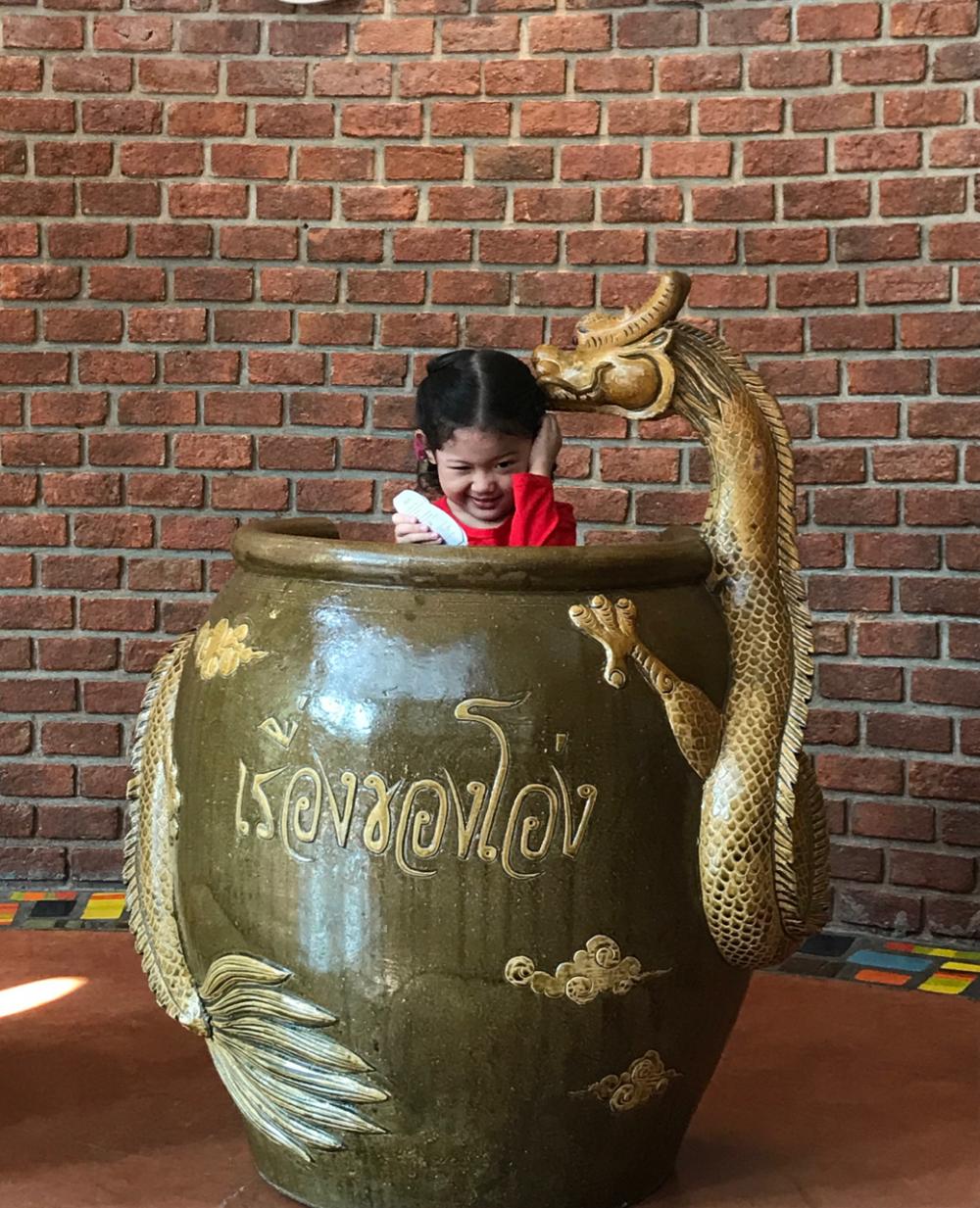 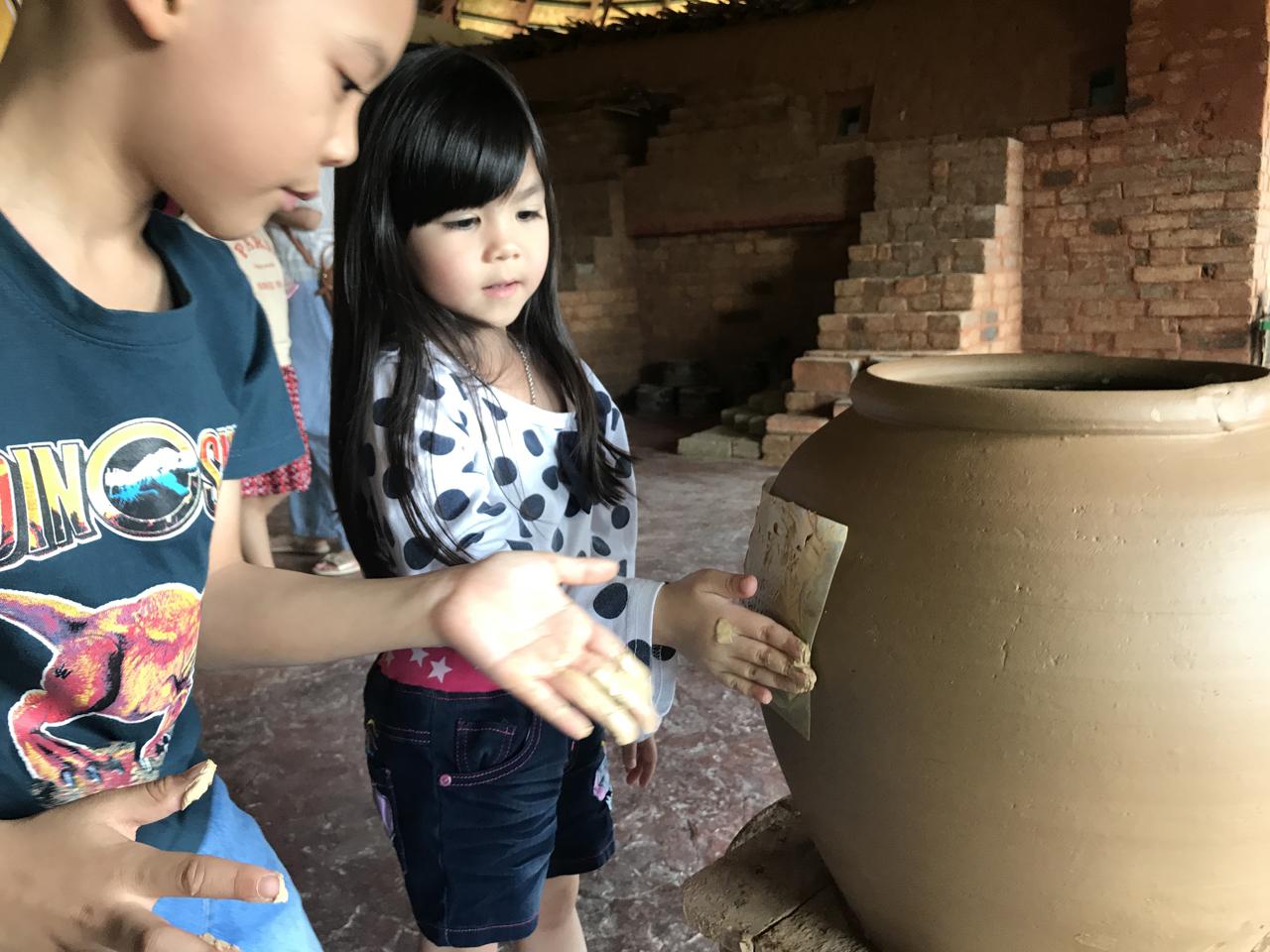 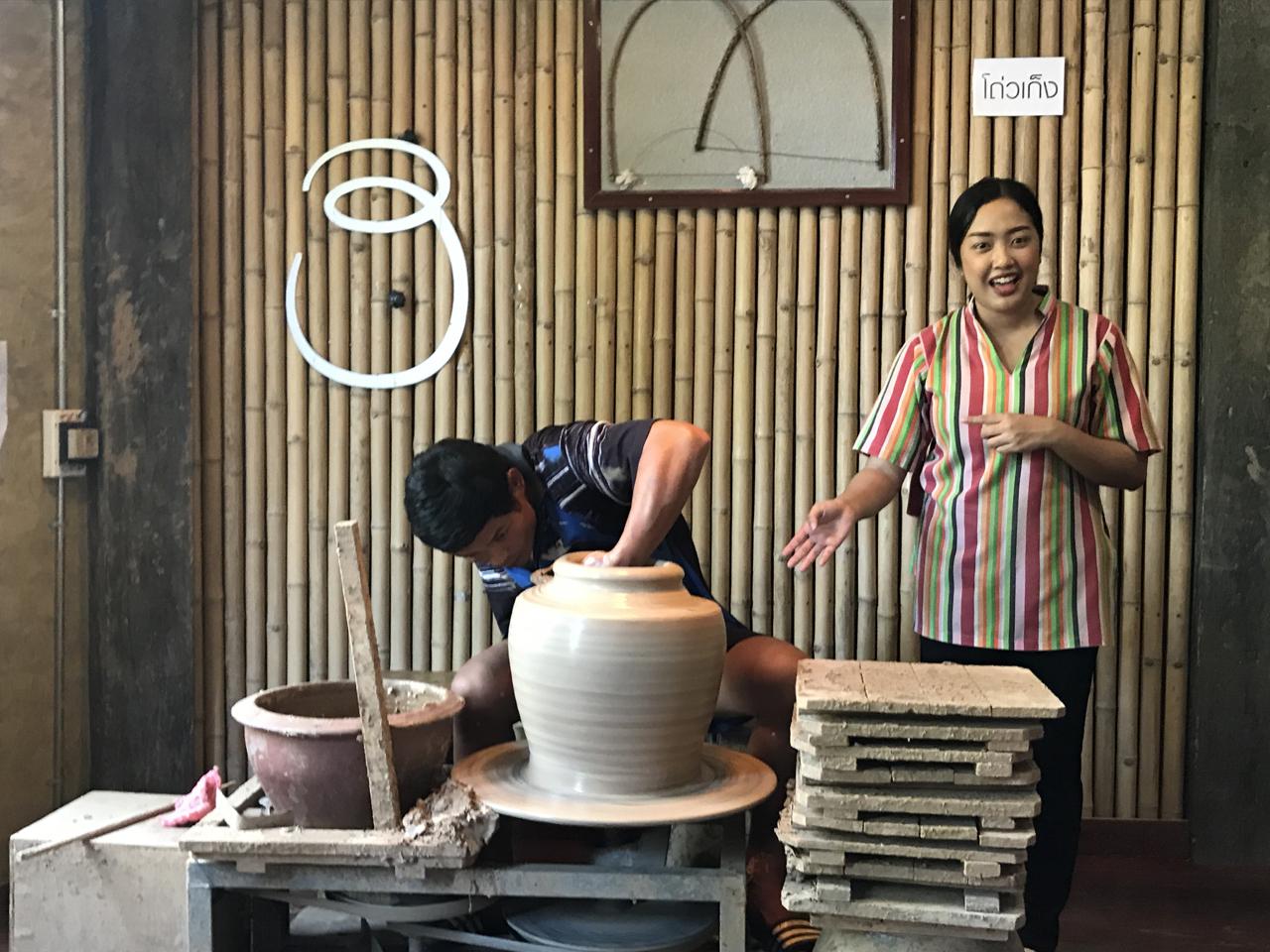 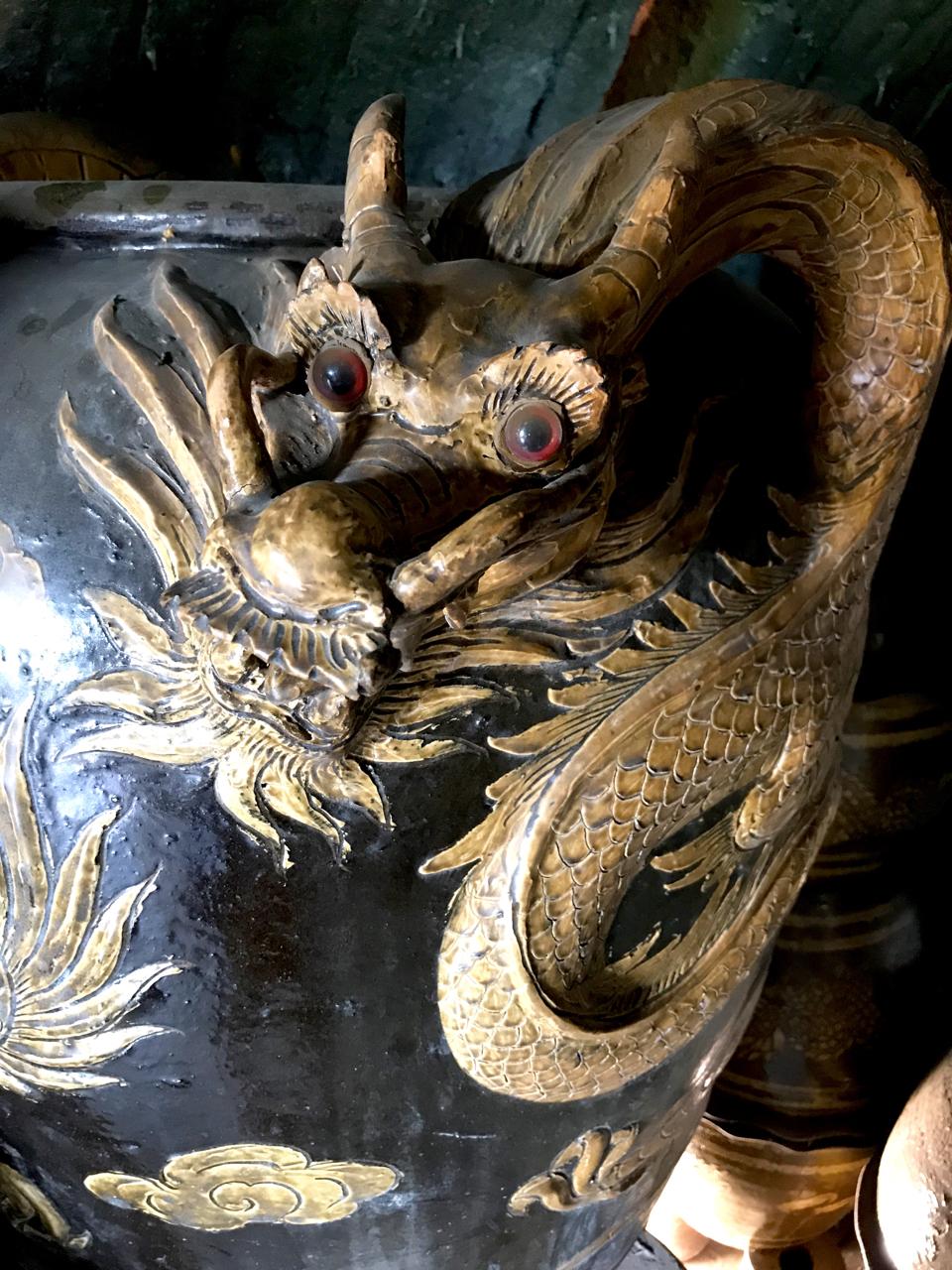 At the reception area inside the Rueang Khong Ong museum, a pair of ong mangkorn (giant water jars) are set as photo props. A child is asked by her parents to pose by putting her cheek close to the dragon but she is afraid of the mythical monster. The museum consists of three zones. There is an animation room informing visitors about the history of earthenware, a collection of old water jars and a station where visitors can learn how to make jars or create patterns on them. According to the museum guide, the dragon pattern is the most popular design for water jars made in Ratchaburi because the creature symbolises strength and prosperity. The patterns can also reflect the social status of their owners. A water jar for a commoner should be a three-toed dragon. High-ranking officials can own a water jar with a four-toed dragon. The five-toed dragon is reserved for kings and deities, she said. One of the highlights of the museum is a large ong mangkorn with nine five-toed dragons. It was built many years ago by its veteran craftsman to honour King Rama IX. 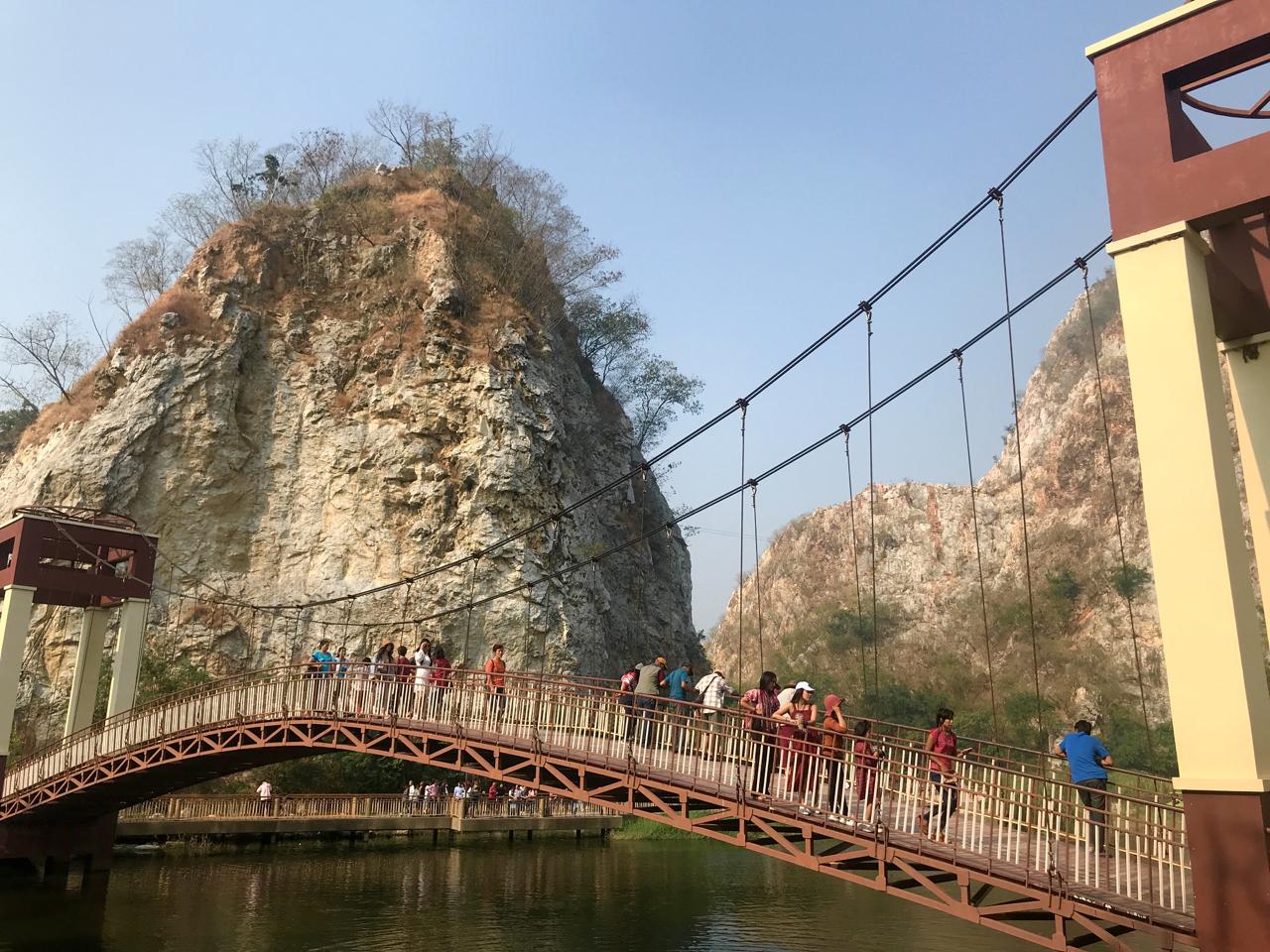 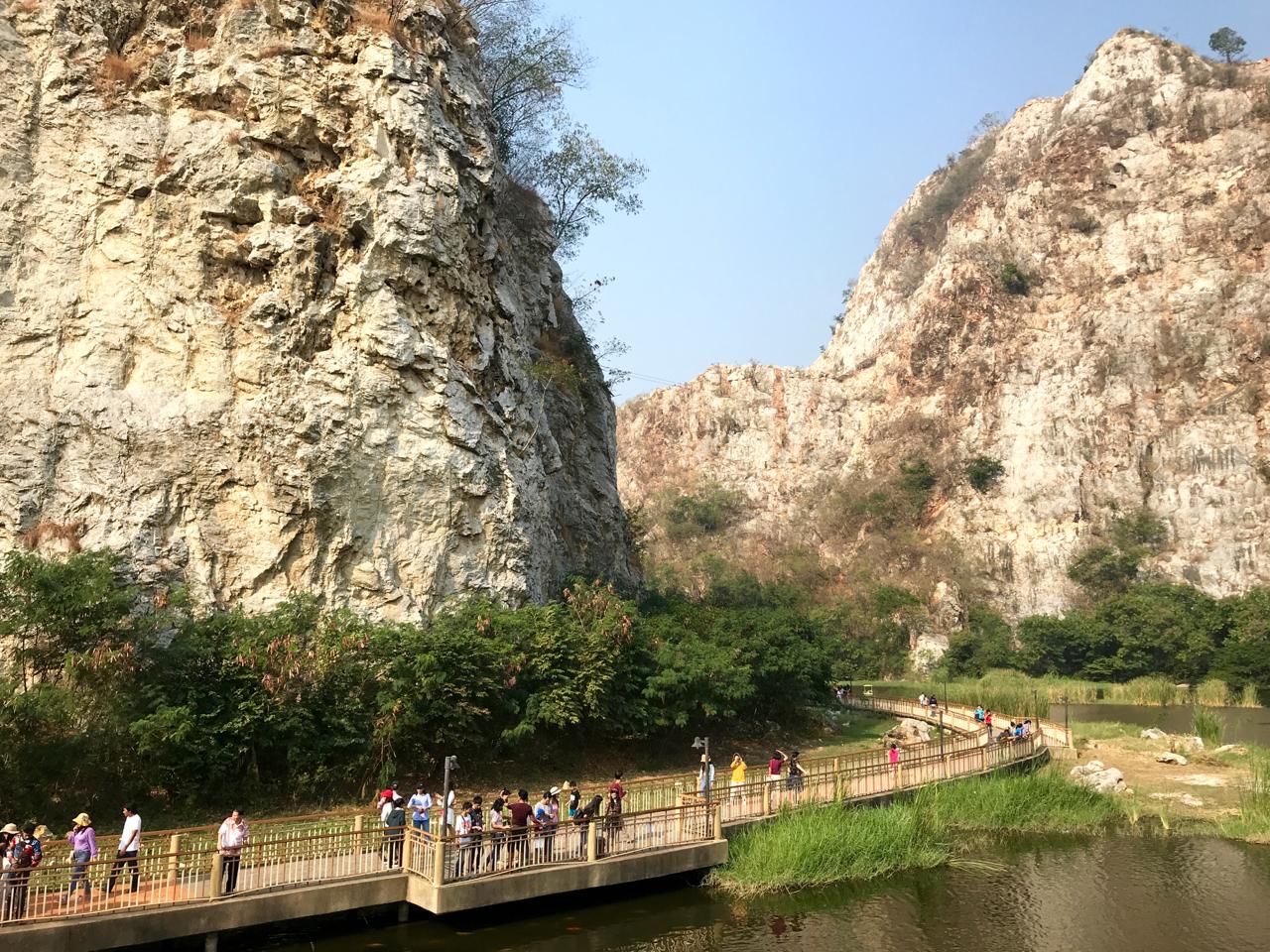 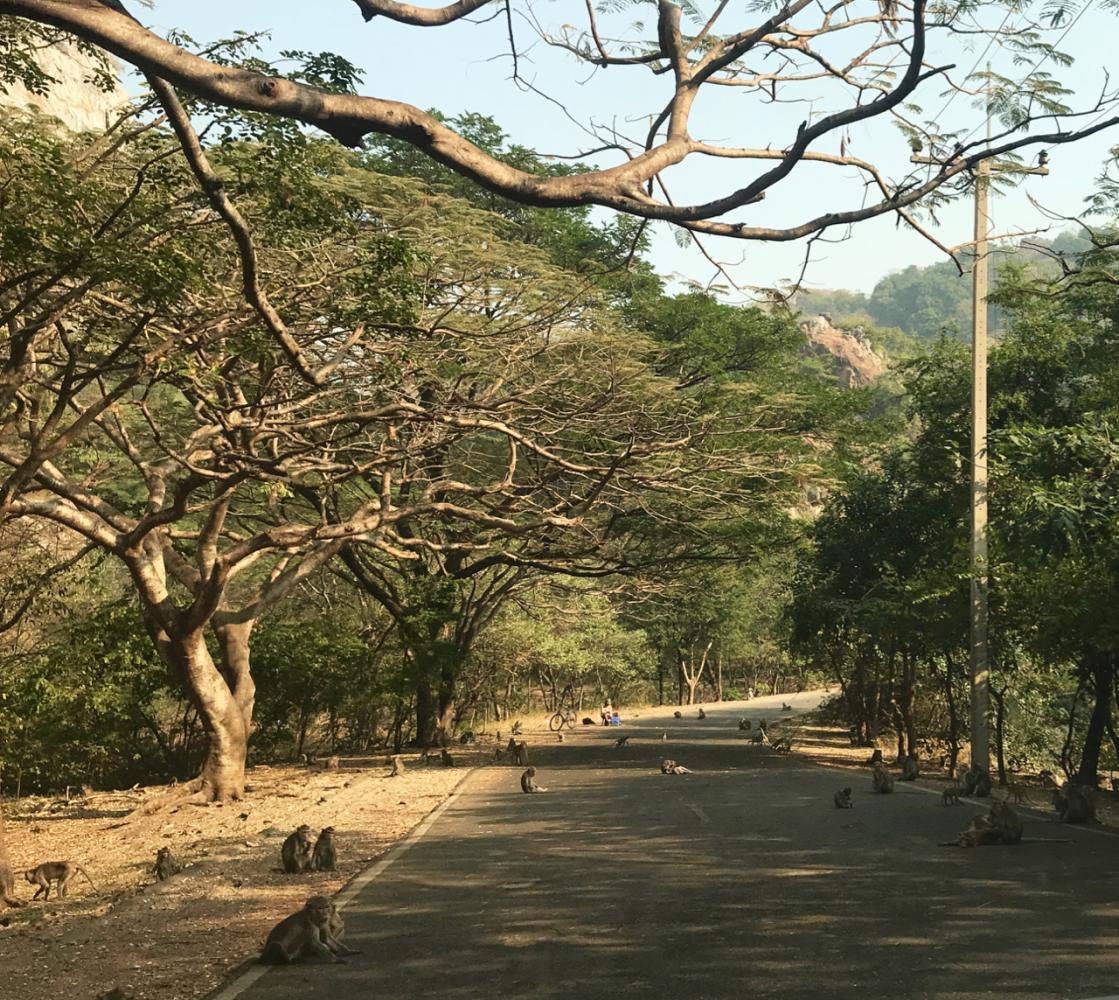 You can spend one or two hours touring Khao Ngu Stone Park. The main entrance gate has a large car park and a souvenir outlet. From there, you can directly walk to the lake or turn left to cross the suspension bridge to the vantage point or turn right to take a pedal boat. Other attractions like the Buddha caves are far apart and you need a vehicle to access them. 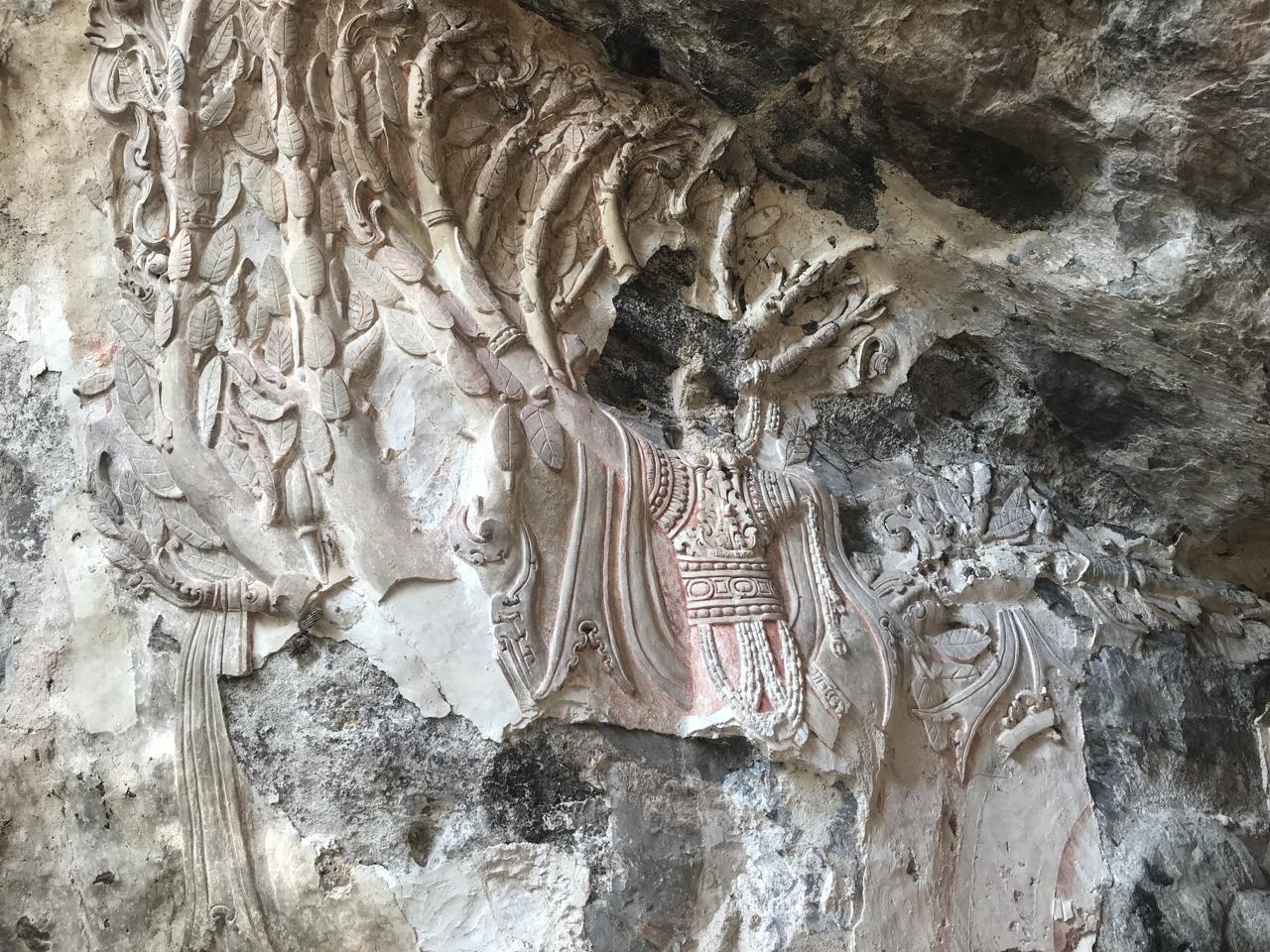 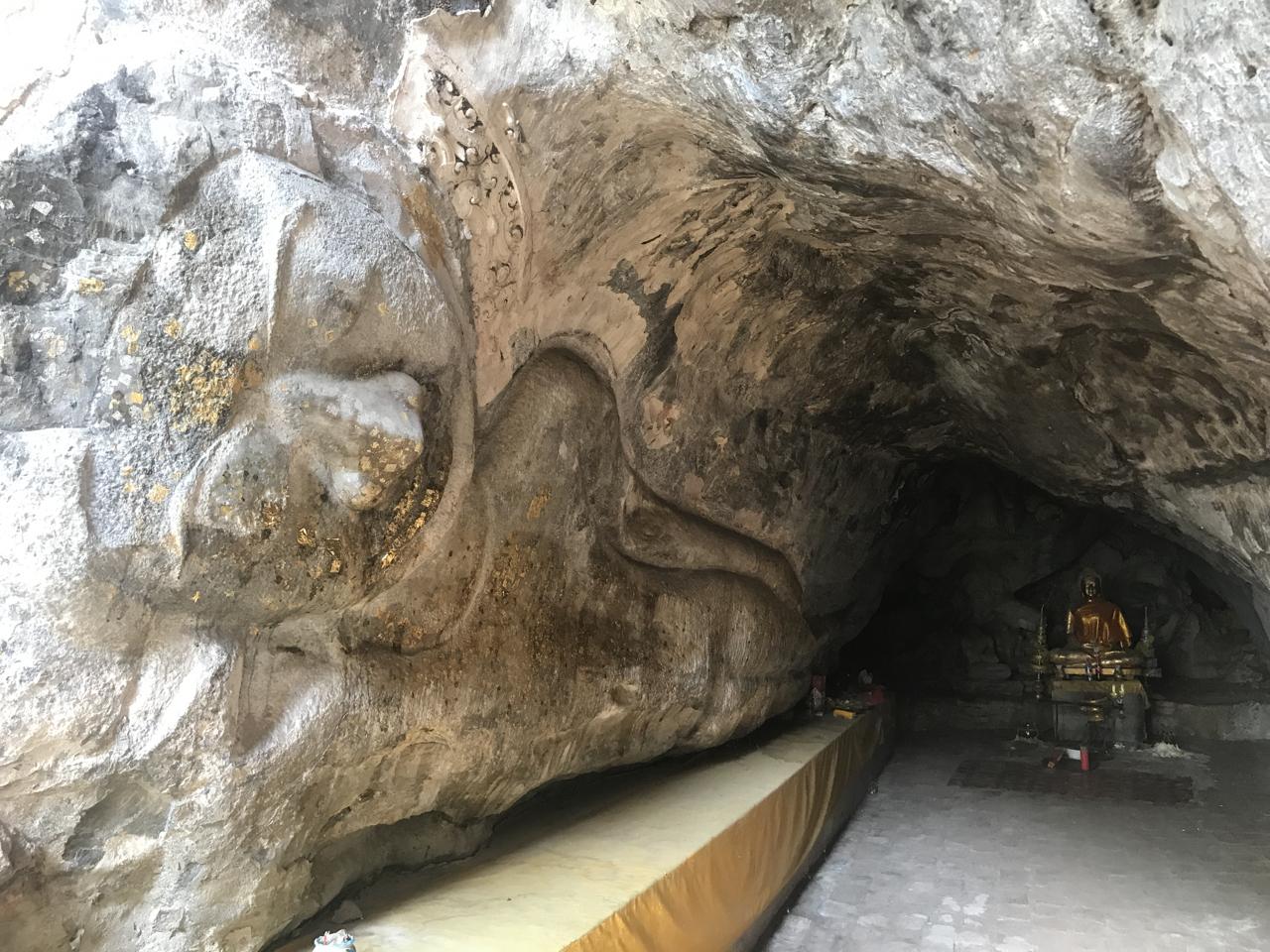 The reclining Buddha image and the Bodhi tree were carved into the wall of Tham Pha Tho in Khao Ngu Stone Park. It is believed that the images were created in the Dvaravati period when the site was used for Buddhist worship. To see the ancient images, visitors need to negotiate 230 steps to reach the cave. 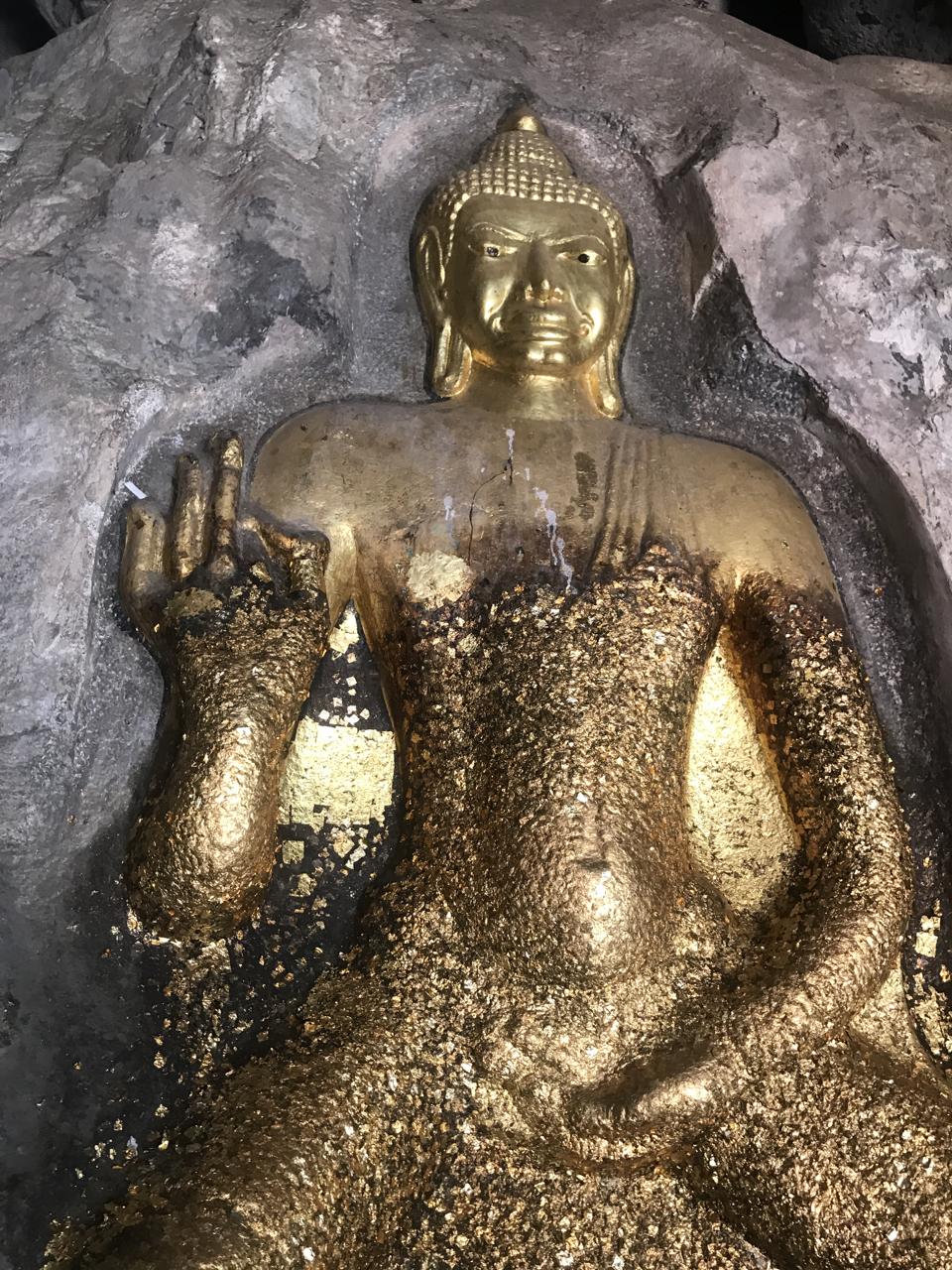 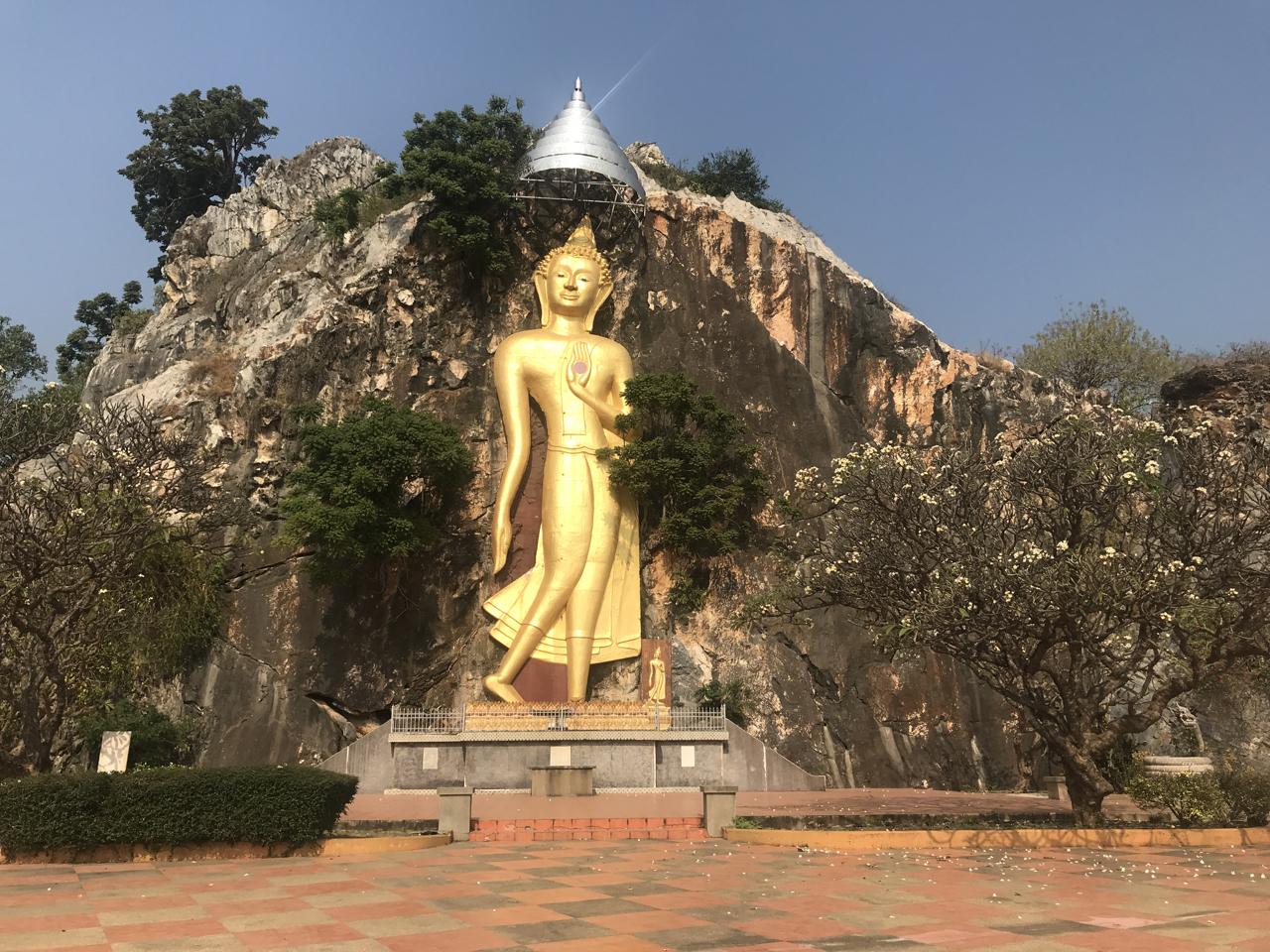 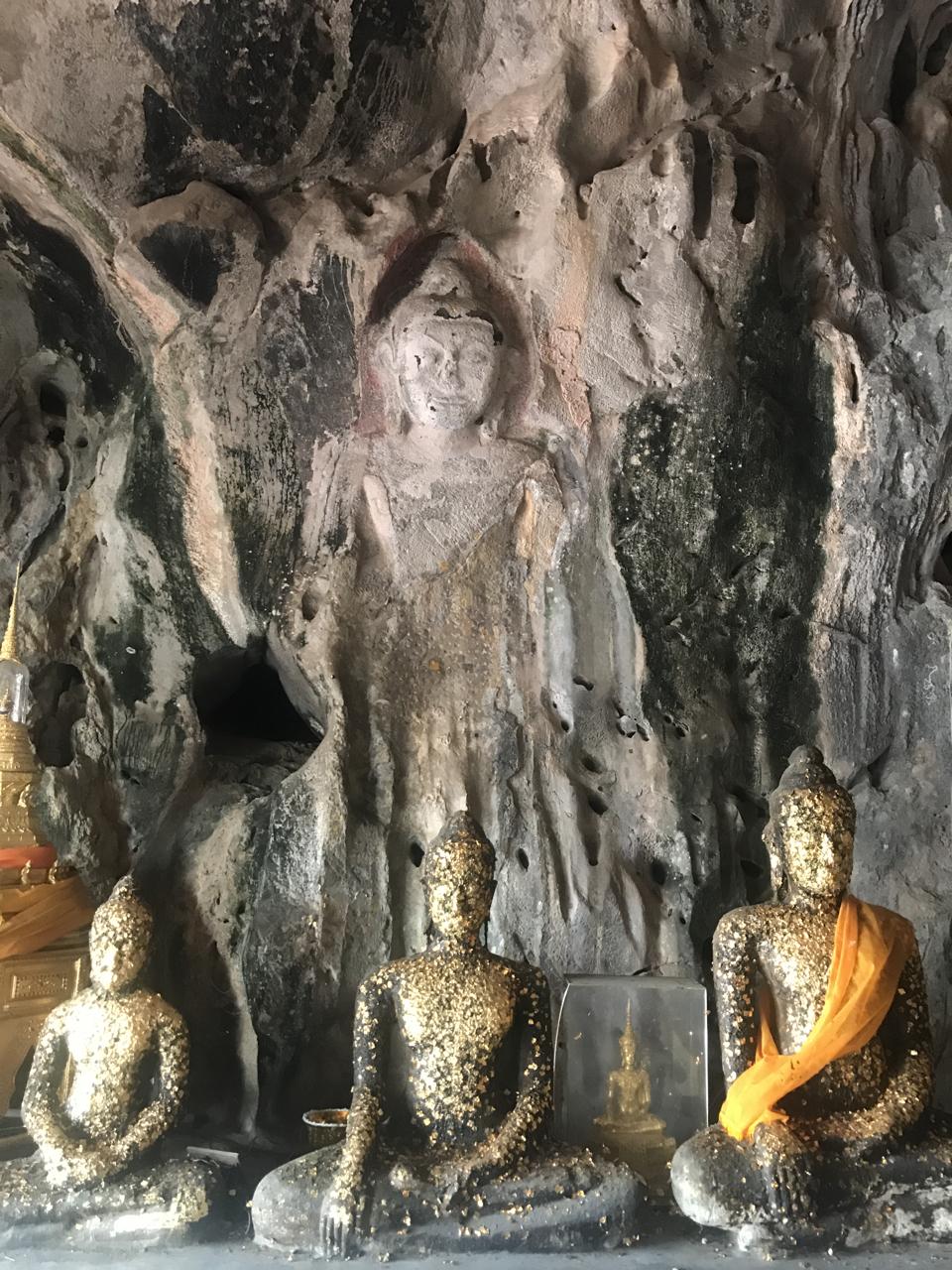 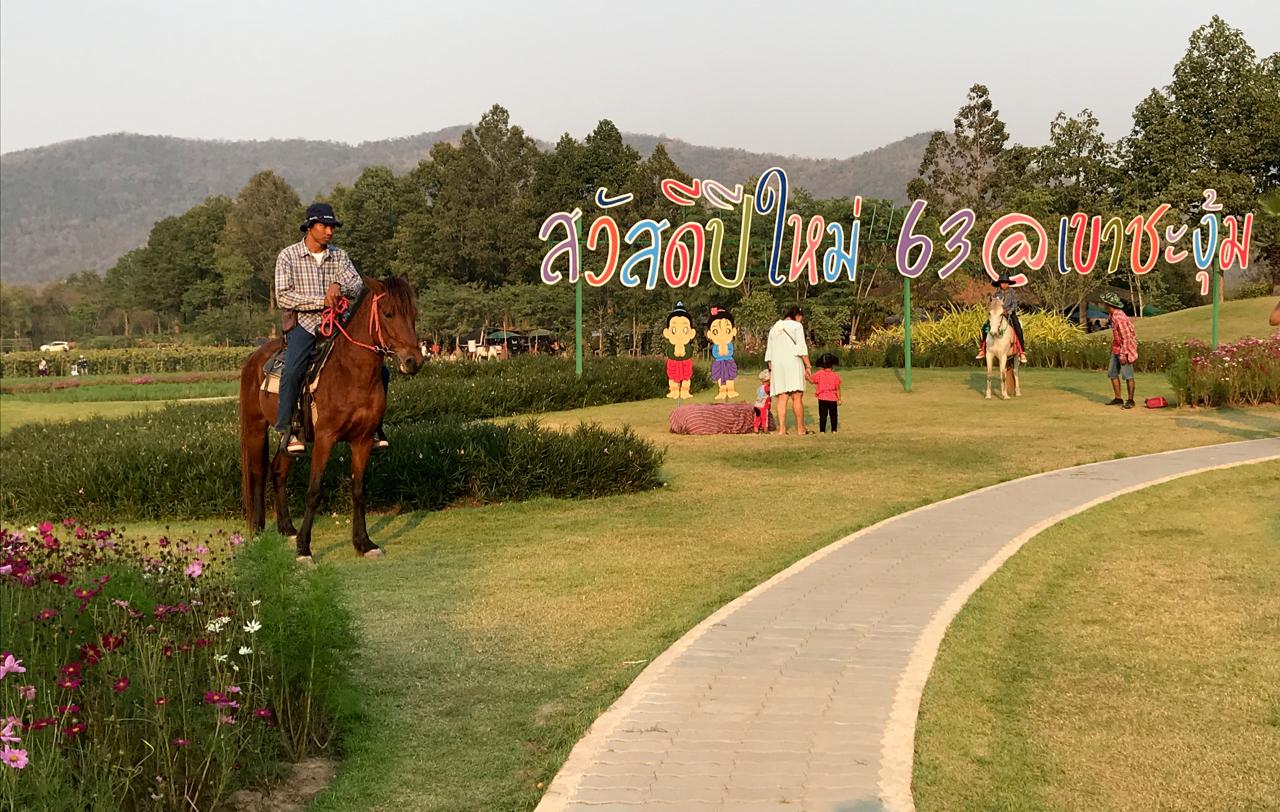 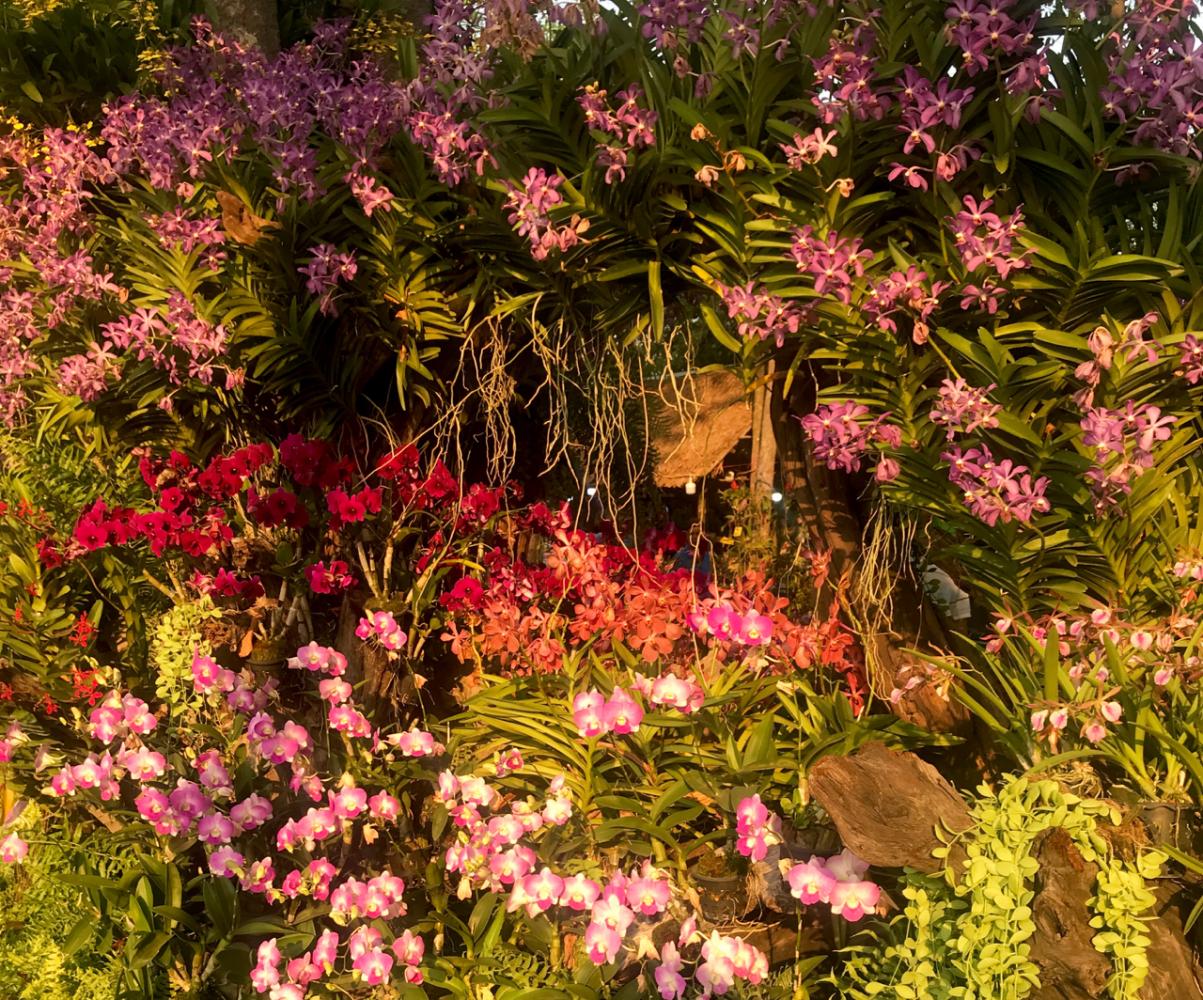 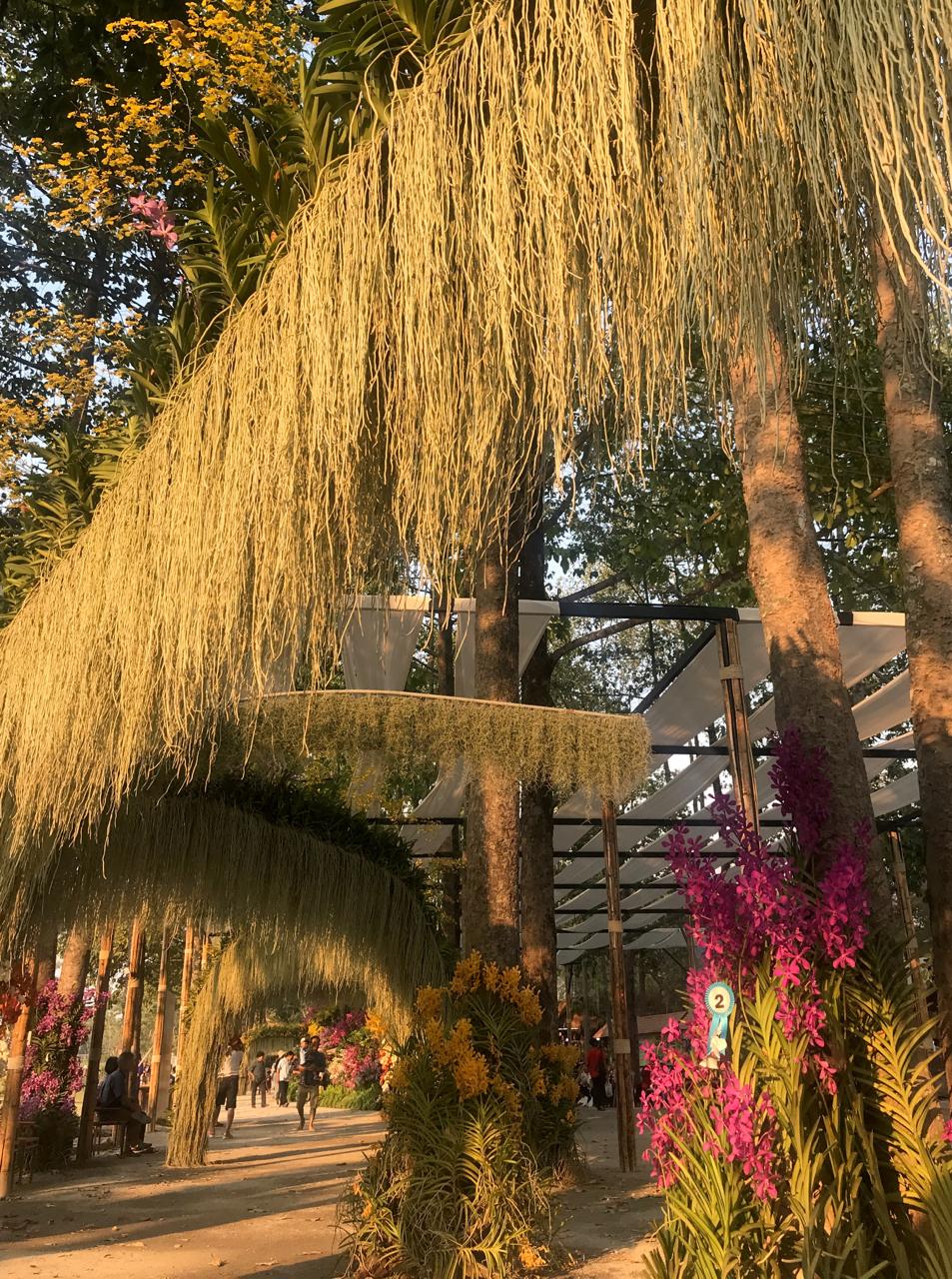 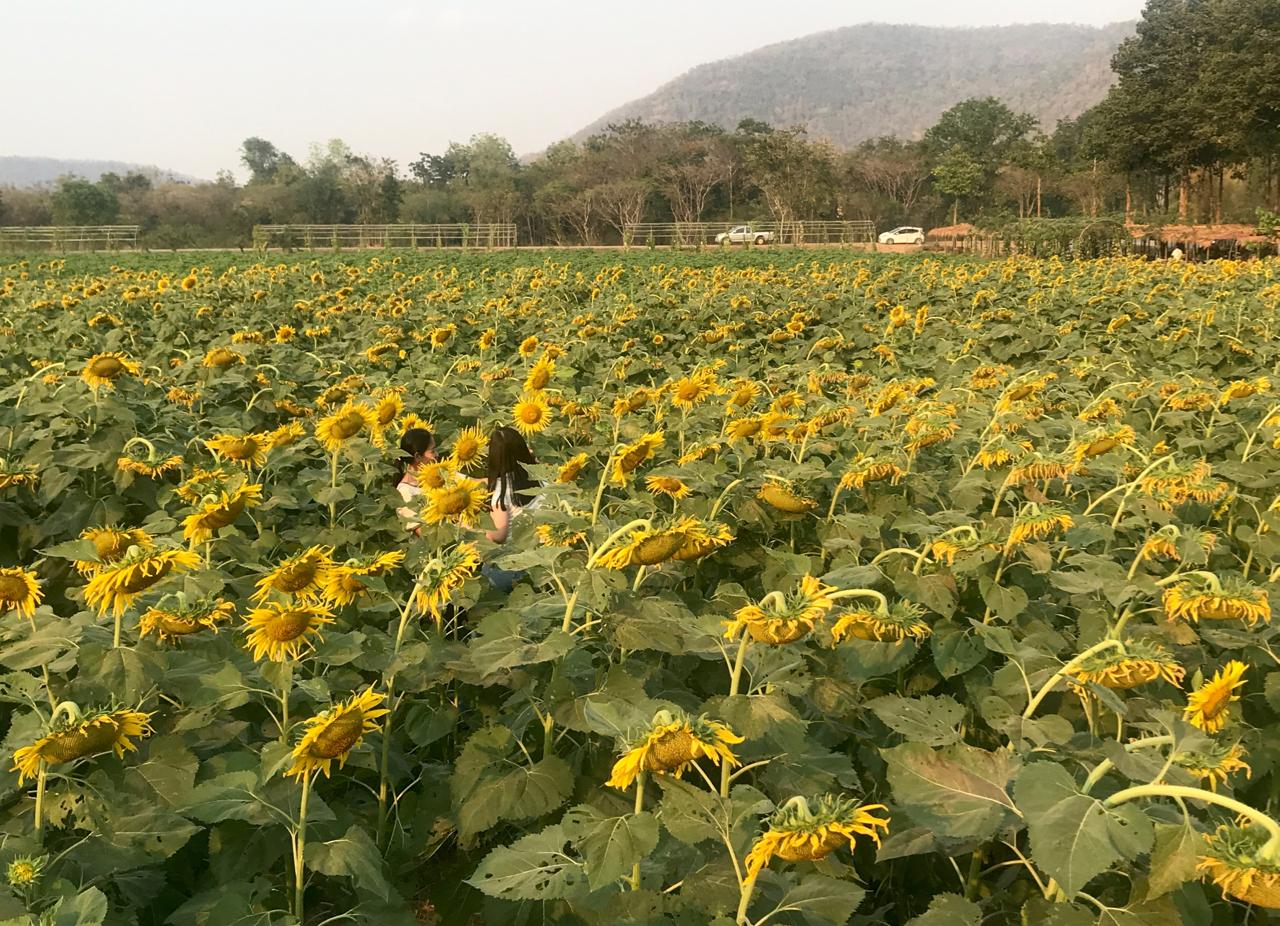 Khao Cha-ngum Royal Study Centre is an outdoor attraction with a large space where young children can run around. It has facilities for meetings, incentives, conferences and exhibitions (MICE) travellers and can arrange programmes for tour groups. The main attractions this month are the sunflower field and the orchid contest. The centre also has a horse riding service for visitors to pose or slowly ride through the flower fields. 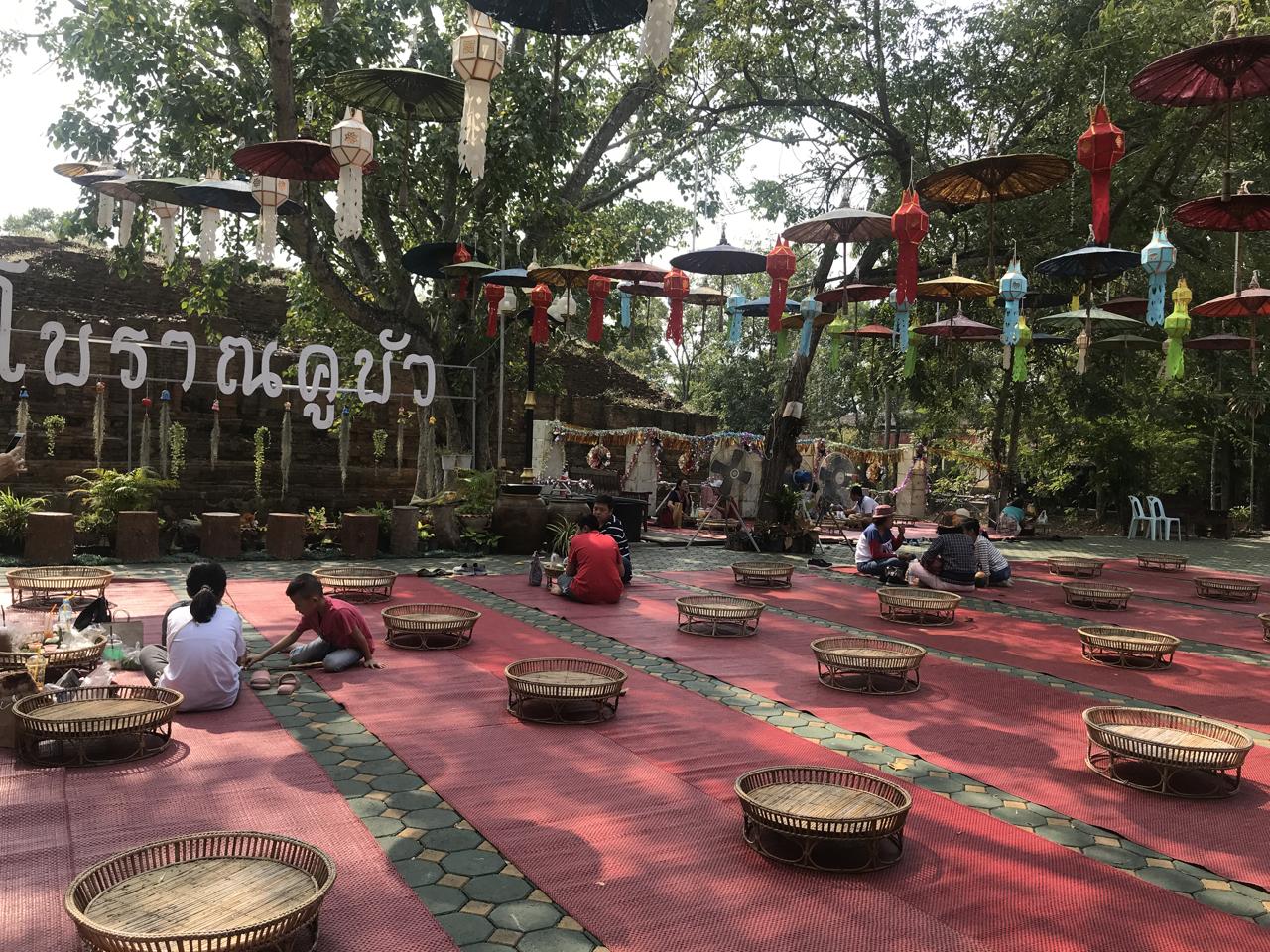 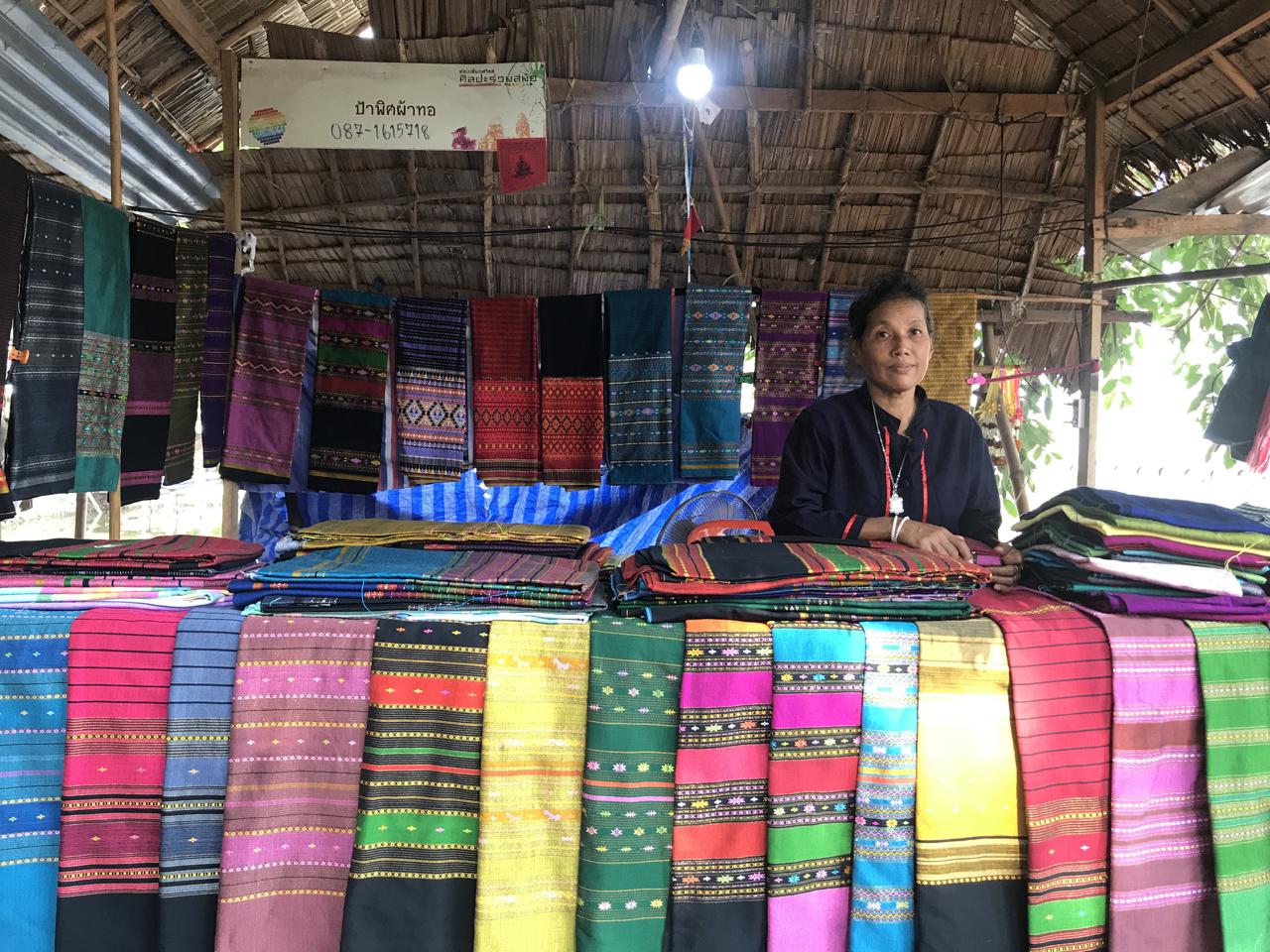 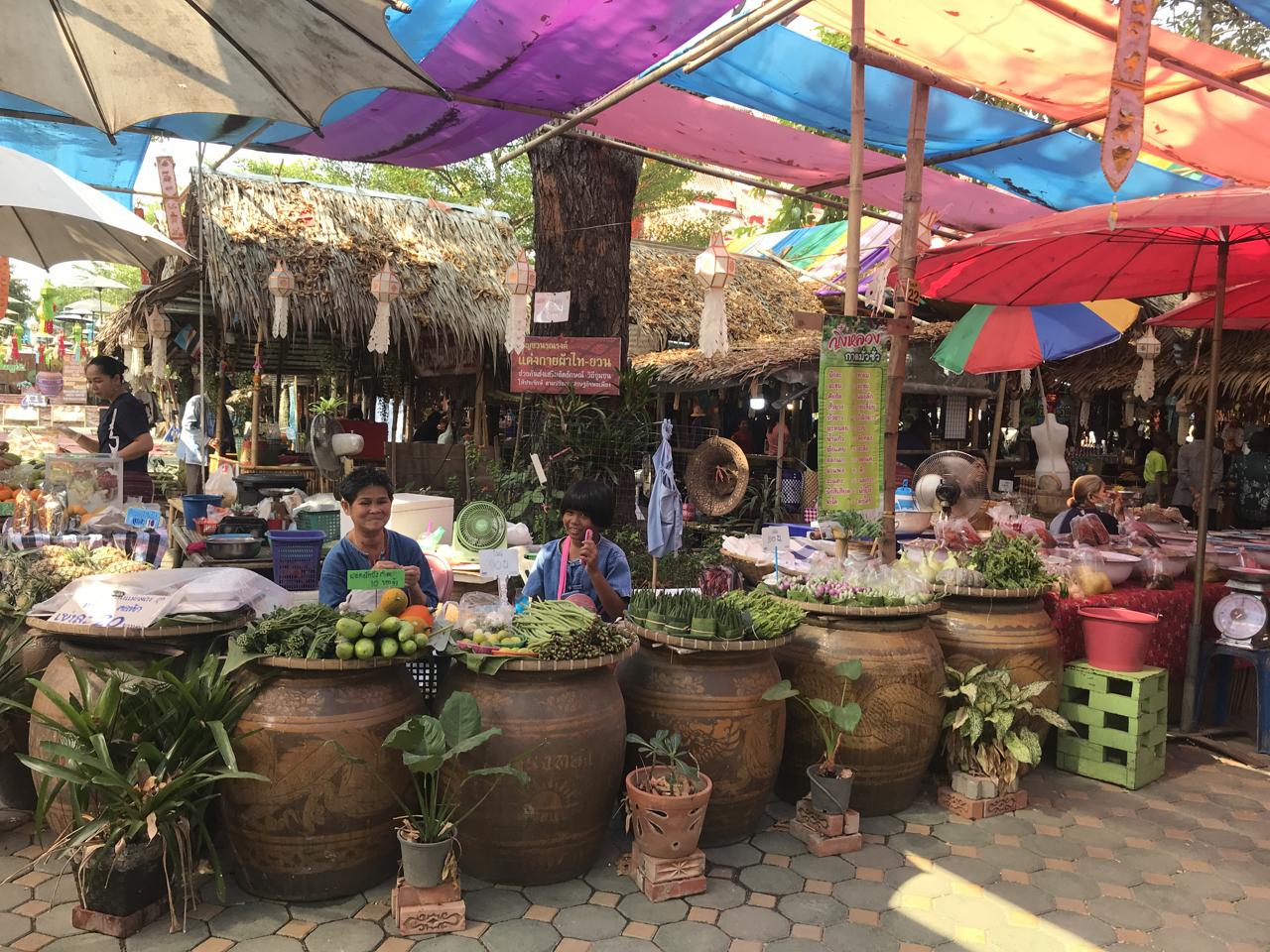 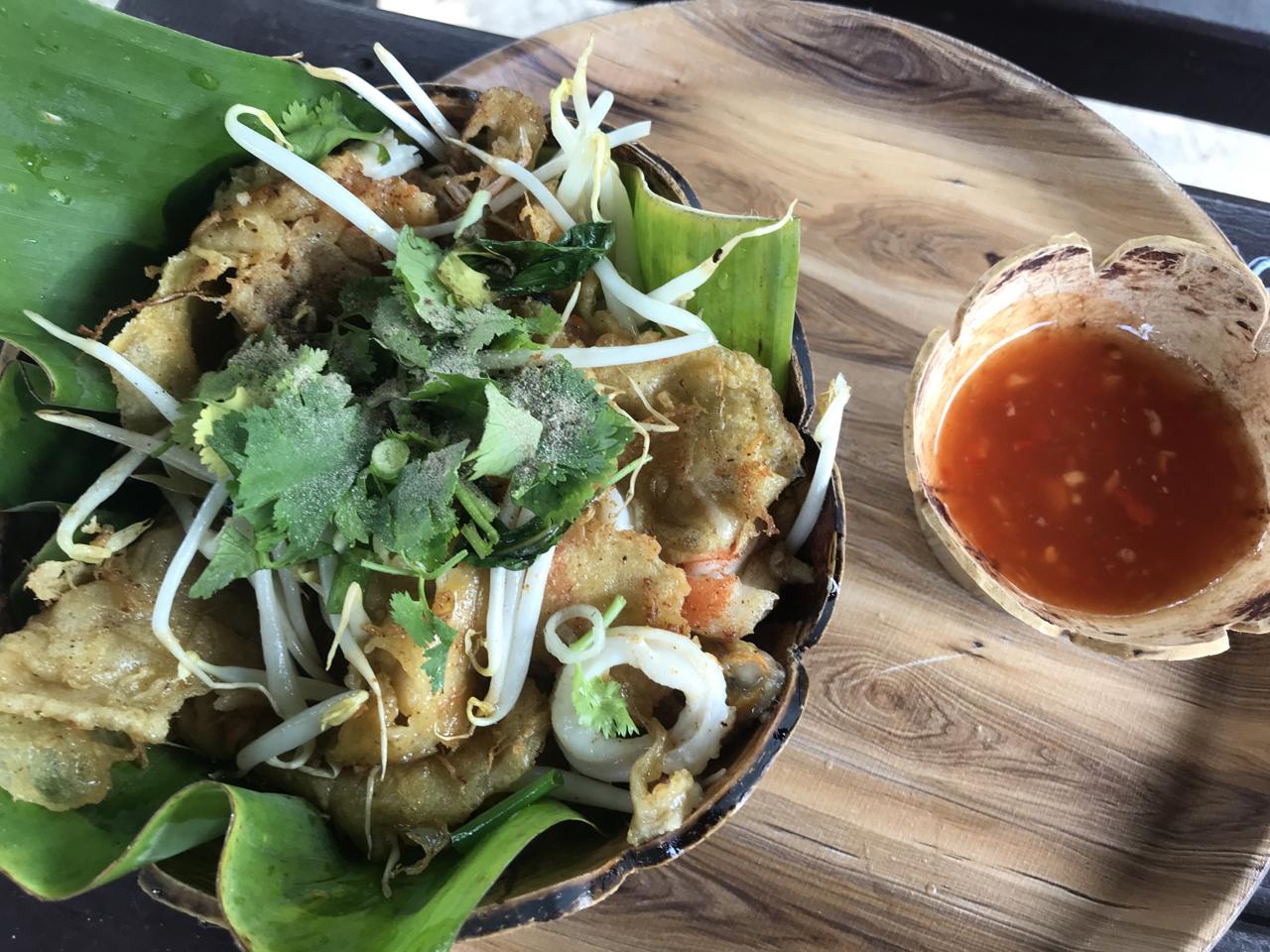 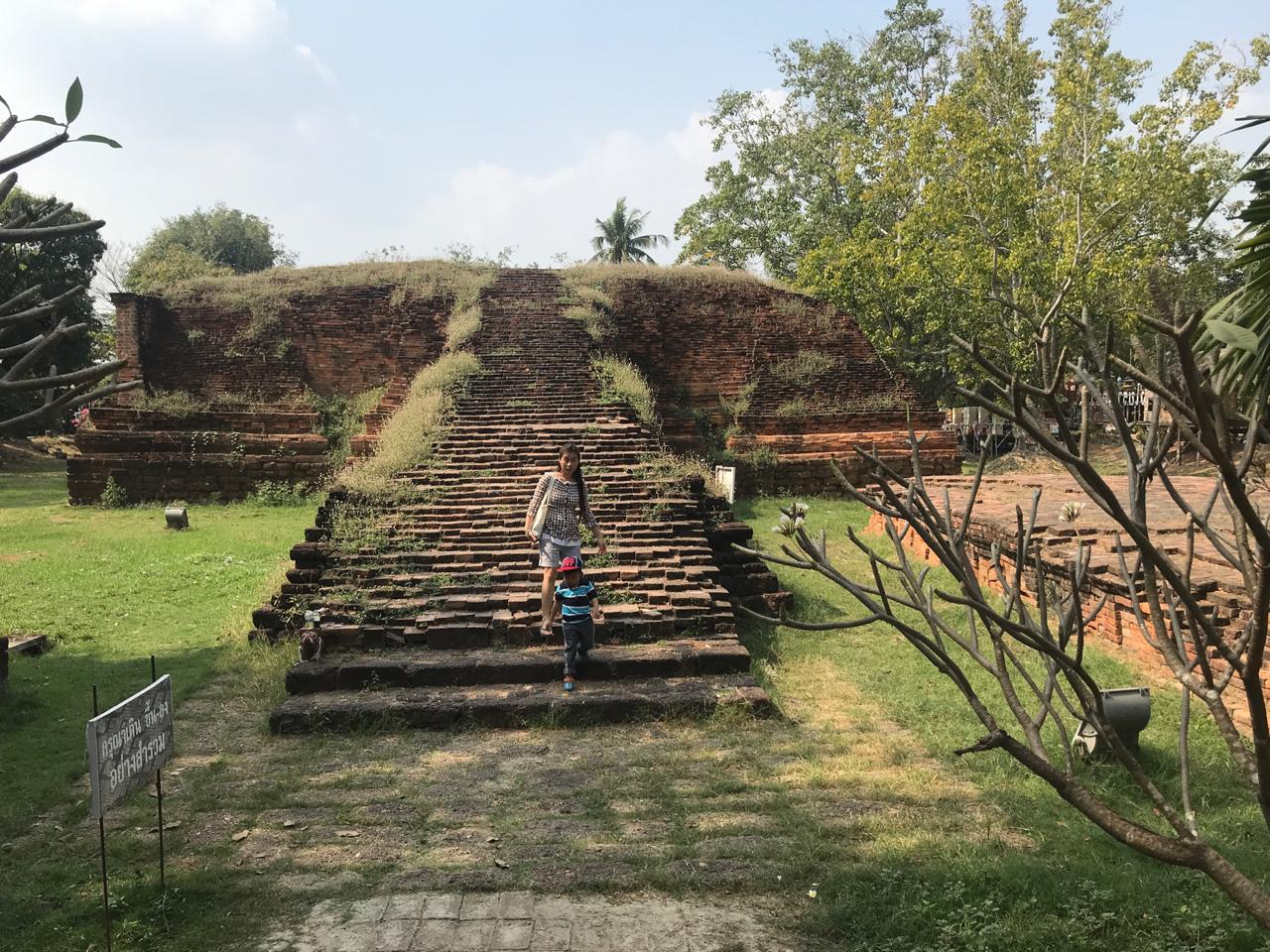 Inside Wat Khlong Suwan Khiri in Muang district is Kad Withi Chumchon Khu Bua, a weekend market. It sells local farm produce like lime, passion fruit and bilimbi fruit. Hot meals, snacks and drinks like nam oi dam (unsweetened herbal juice) are also available. The market is also known for its handmade textiles woven by Tai-Yuan people, who migrated from Chiang Rai's Chiang Saen district to Ratchaburi more than two centuries ago. They weave pa chok, colourful hand-woven fabrics using a "pick and pull" technique. Their traditional patterns are based on the beauty of nature, such as flowers and birds. Those who visit the kad (market) will see a ruin believed to be a prayer hall that was built in the 11th century. It was listed as a national heritage site in 1959. Also open for public visit is a local museum called Chipatha Phanthasathan Ban Khu Bua. It houses a collection of ancient artefacts found in the area as well as old everyday items. The aim is to tell the story of the Tai-Yuan people. 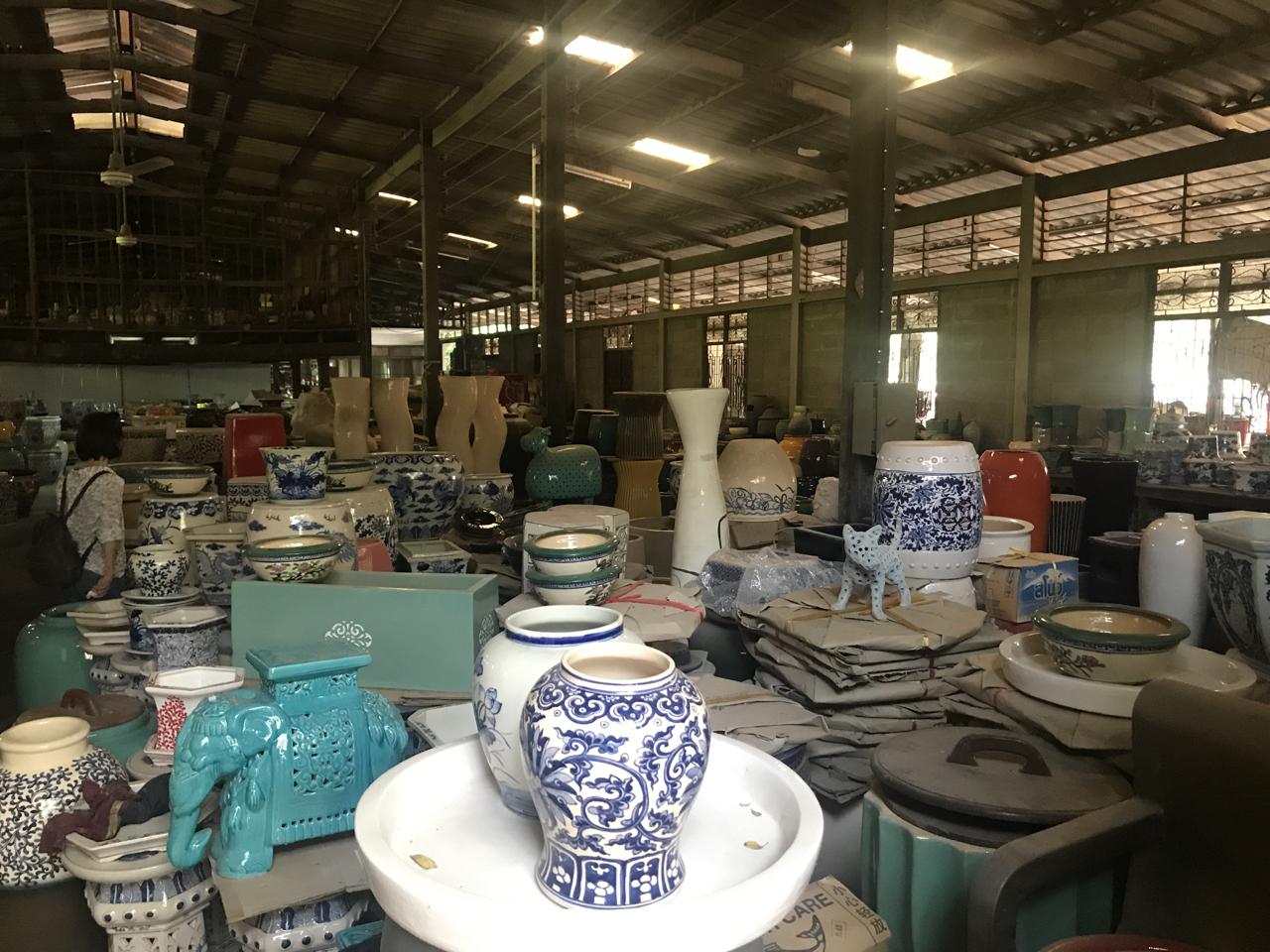 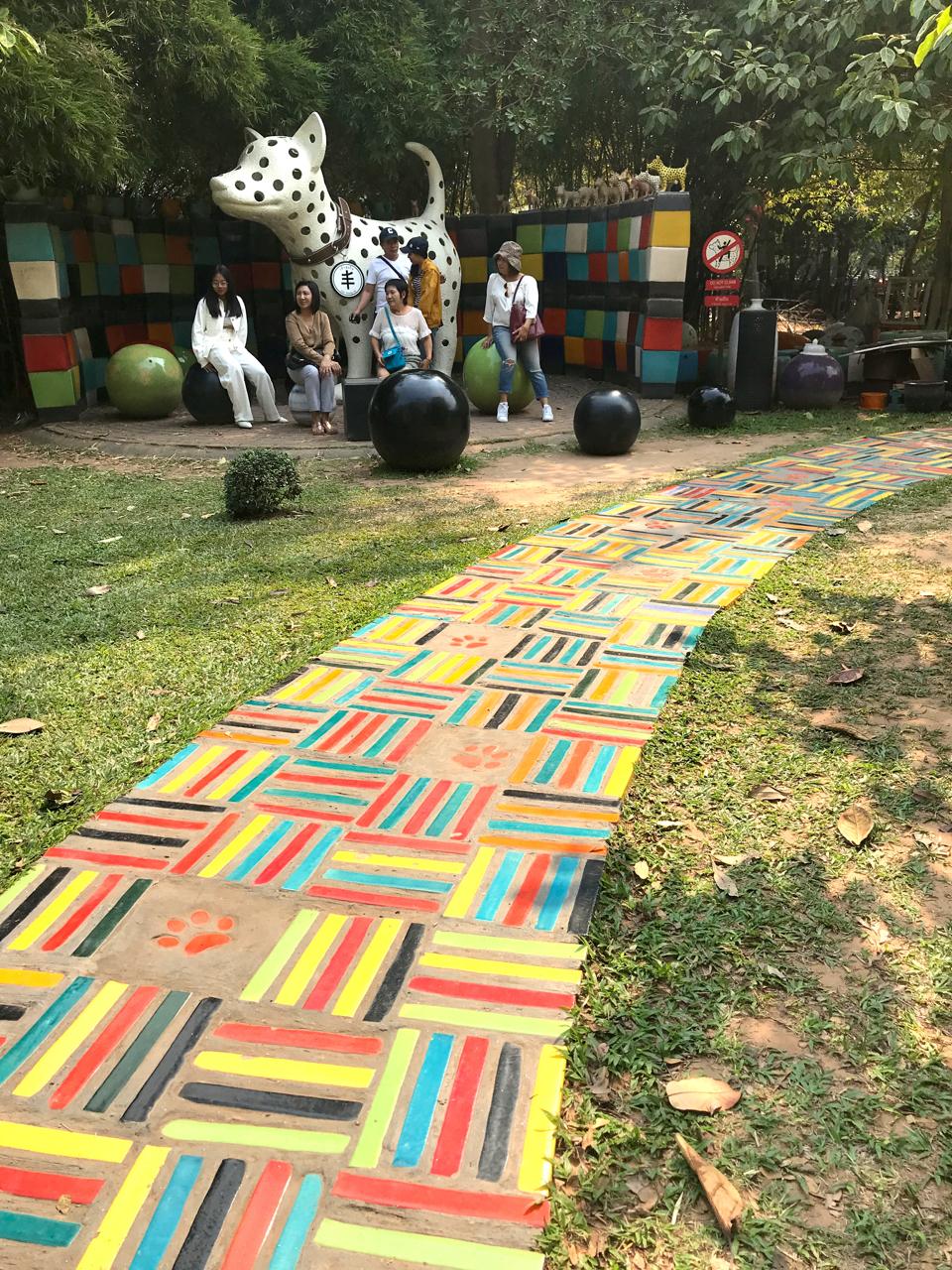 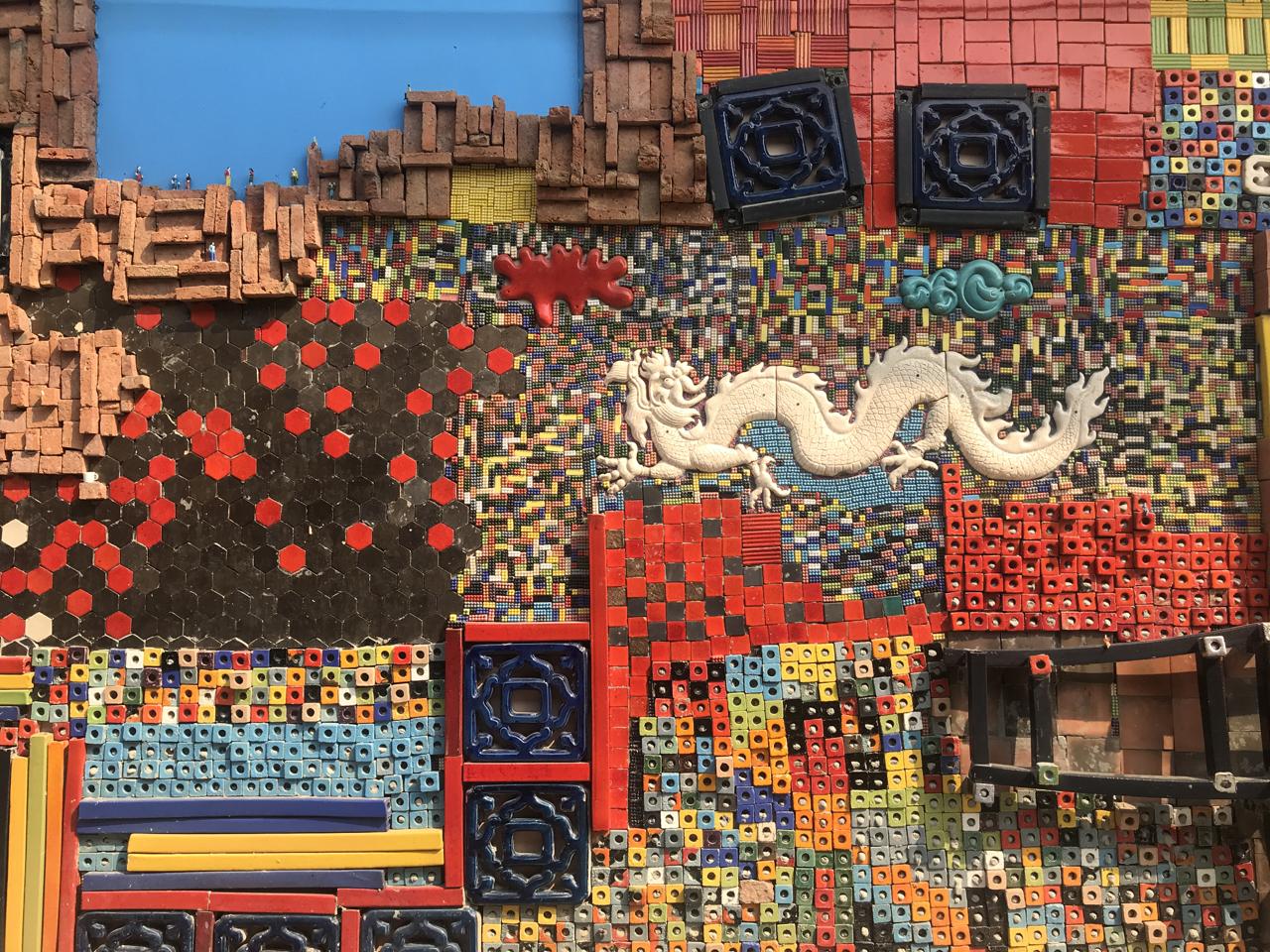 Known as the pioneer in ceramics in Ratchaburi, Tao Hong Tai has been open since 1933. Today it is run by the third generation of the Supanichvoraparch family. The factory is open for visitors to observe the work of their craftspeople on condition that visitors must not bother the workers by asking them any questions or taking pictures. The warehouses are also open to the public. Thousands of ceramic pieces of different sizes, shapes and styles are also on display. If you happen to see anything you like, you can ask a staff member there for the price. 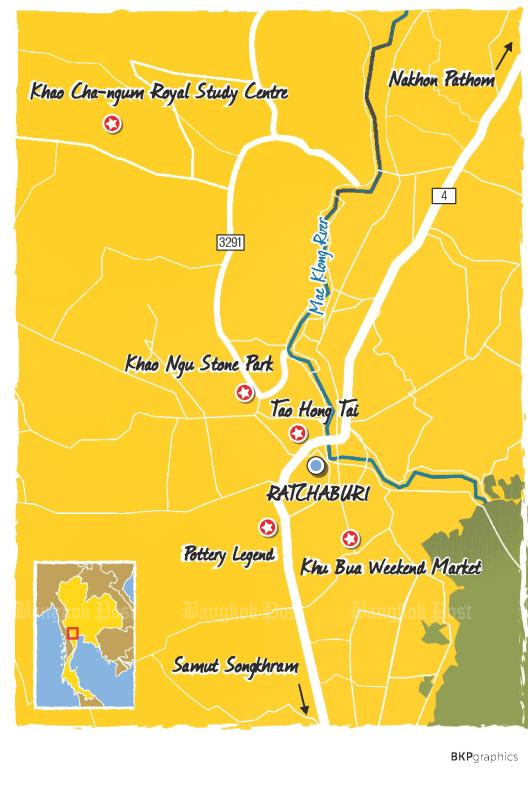