To use is to reuse
Life
Social & Lifestyle

To use is to reuse

There's no question that single-use plastics are bad for the environment, but is banning them the only solution?

Funny photos taken at supermarkets and convenience stores across Thailand were circulated on New Year's Day, showing customers carrying unusual containers like a construction cart, a cement bag, a plastic bucket and even a stainless-steel cooking pot to use as substitutes for plastic bags. 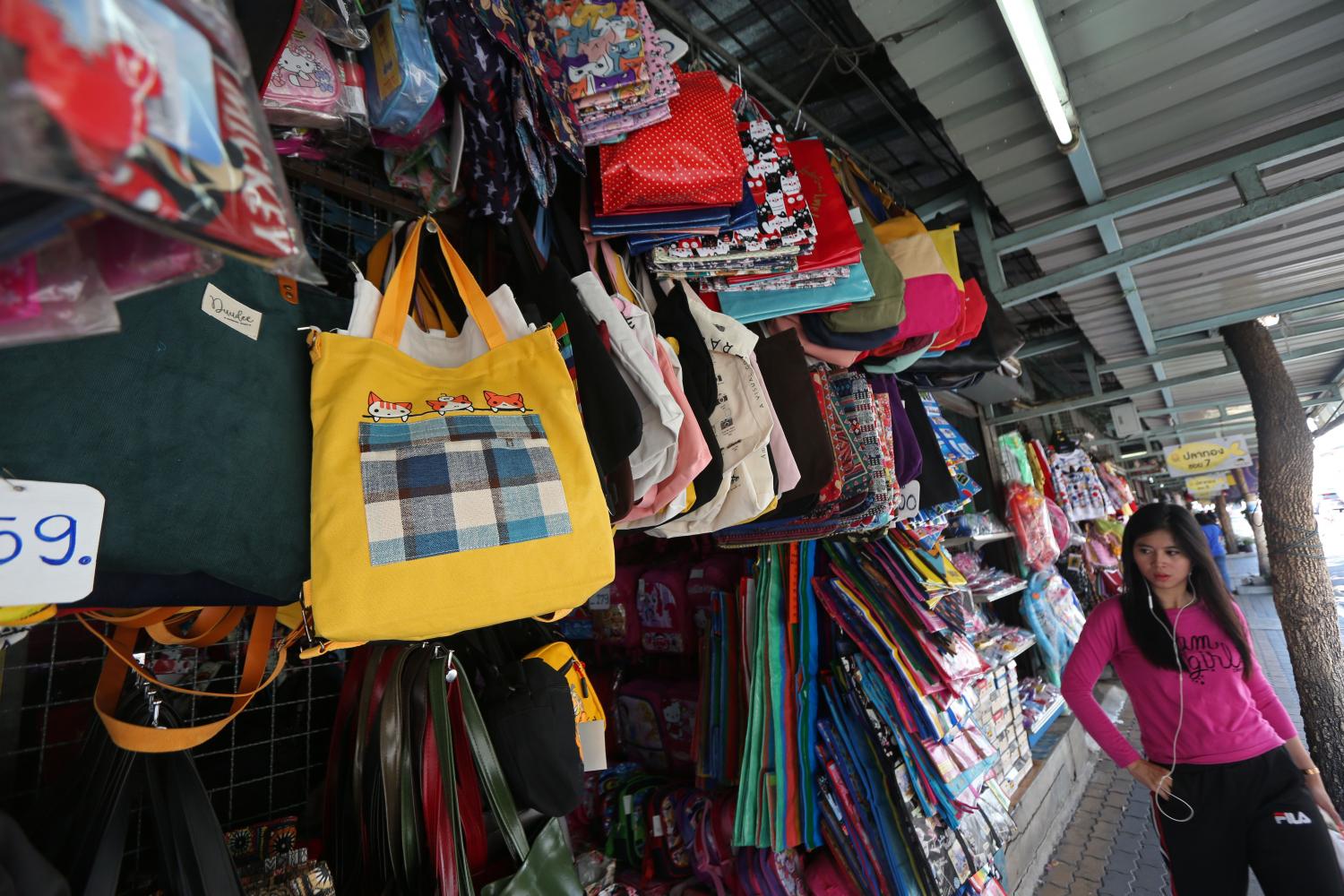 On Jan 1, Thailand implemented its ban on plastic bags given at major retailers and convenience stores, in order to cooperate with the Ministry of Natural Resources and Environment's no-plastic campaign. This is the reason those funny photos were captured and went viral.

The campaign by the Natural Resources and Environment Ministry was set to reduce single-use plastic bags. According to figures from the Department of Pollution Control, 2 million tonnes of plastic are thrown away each year in Thailand, equivalent to 12% of total waste. Of this number, only 500,000 tonnes can be recycled. The rest is contaminated and has to be either buried or burnt.

Since major shops stopped giving away plastic bags to customers, people have had to look for substitutes, and tote bags have become their go-to items. At the Sampheng area, tote-bag wholesale shops are mushrooming, although most vendors said the sale of their bags didn't see any significant changes.

"The lowest-price calico bags are sold out, but the sales aren't much more different from last year," said Ae, a young vendor, as she sat next to a sign that read "Stop Global Warming".

Unlike physical shops, tote-bag online stores feel satisfied with their high volume of orders. Nan, 20-year-old owner of the Krabaopa Rakasong shop on Facebook, which just opened on Jan 1, said she made the right decision to import nylon bags from China. 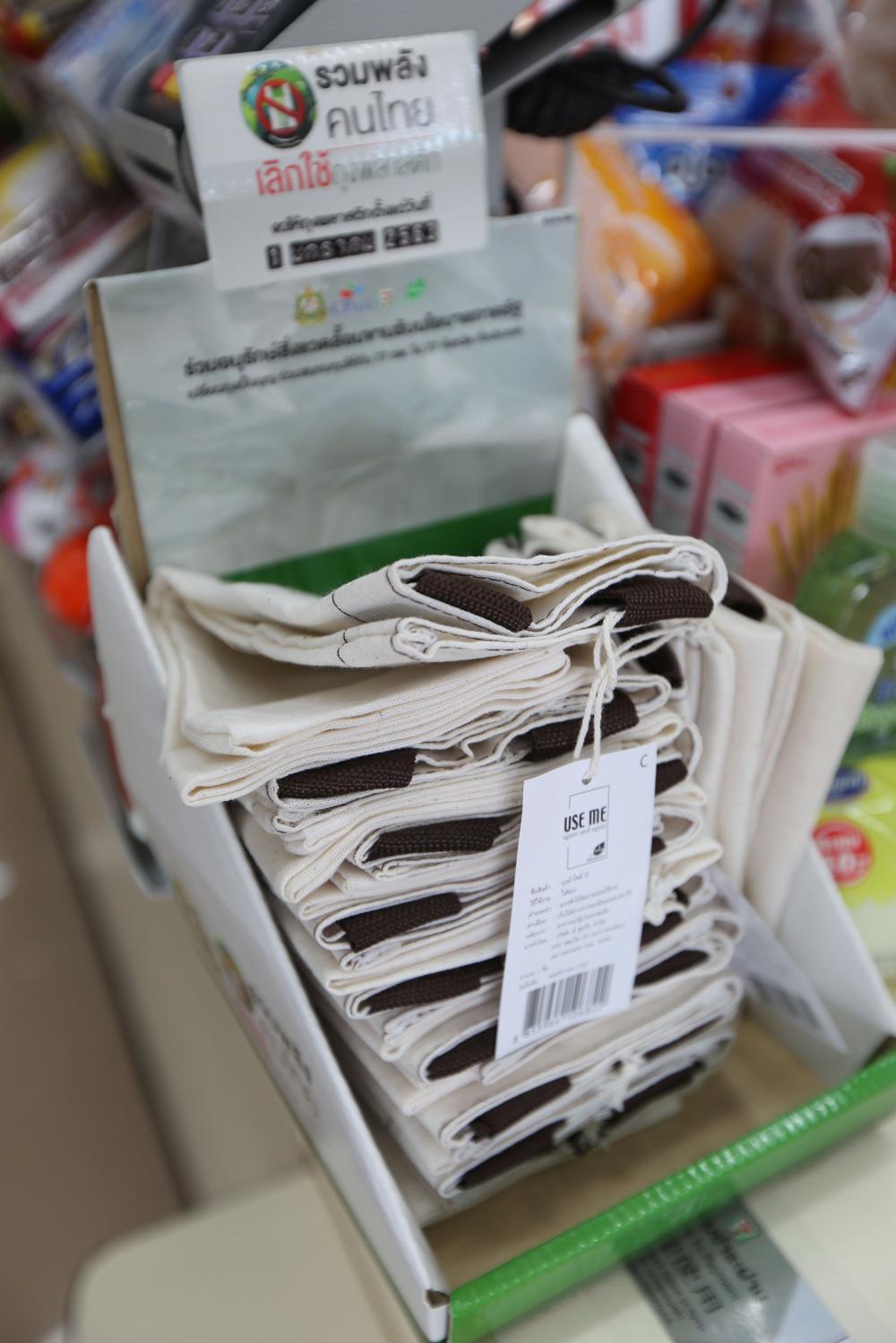 A convenience store offers tote bags for shoppers who don't have their own.

"I just opened the shop a couple days ago and could sell 20-25 bags a day. I agree with the no-plastic-bag policy because it helped me with this business. I personally carry a cloth bag with me every day," Nan said.

The custom-printed calico bags are very popular. Two manufacturers and shops, Win Core Bag and Bag in Love, distribute calico bags, which can adjust their designs to fit special occasions such as wedding parties, retirement parties and funerals, and received a lot of orders, especially in December.

"Last year, we had a lot of orders since June. It was overwhelming until we had to stop receiving orders on Dec 3. The number was three times higher than the previous year. I think customers come to us because they want something unique and we can provide custom-made products to them," Chula, CEO of Win Core Bag, said.

"Compared to 2018, our sales in 2019 were better. News about whales dying from plastic made people more concerned about the environment than before," said a staff member at the Bag in Love shop who wants to remain anonymous.

For most customers, tote bags are a great substitute for plastic. However, many studies reported that there is environmental impact from the process of making cotton tote bags too. A report from CBS Radio mentioned a British government study in 2018 claiming a cotton bag must be reused 131 times to break even with a plastic bag, regarding the environmental impact from producing each bag.

"The idea of using cloth bags is to reuse. It's similar to buying clothes. You don't throw a dress away after wearing it only one time. If we reuse each bag several times, I don't think it causes negative impact to environment," a staff member of Bag in Love commented.

People who work at tote-bag shops get used to carrying their bags around, so they don't feel troubled when stores stop providing plastic bags to customers. Nevertheless, opinion among customers splits two ways. While some support the no-plastic campaign, others find there should be more choices for people who forget to carry bags. 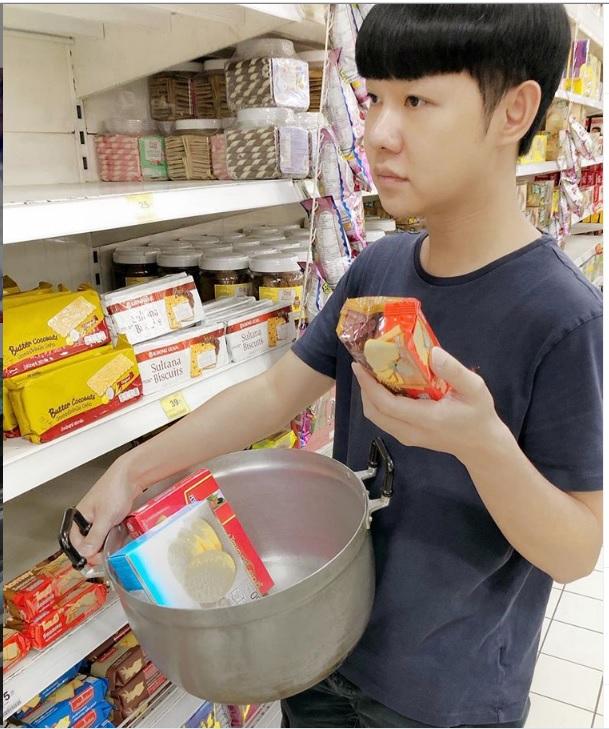 "I started using tote bags after travelling in Hong Kong many years ago. They charged for plastic bags and I didn't want to pay for that, so I decided to carry a bag and found it was fine. I have many bags. Most of them were free," an office staffer named Tham said.

"I have to carry a lot of books, so I have my own cloth bags. Thailand is so behind many countries, which already ban plastic bags. In other countries, they have to pay for plastic bags. At first, Thai people may have to adjust, but they will get used to it. Anyway, I didn't buy a very cheap tote bag online. I once bought a nine baht nylon bag from a well-known e-commerce site, but it was easily torn apart. I could use it only a couple times," a graduate student named Duang said.

People who aren't in the habit of carrying cloth bags disagree with these comments. They aren't happy with the no-plastic campaign.

"I know about plastic pollution and how it affects our environment, but I think we can reuse and recycle it. I'm spontaneous and sometimes go shopping without planning to. I don't want to buy an expensive tote bag that a mall or a convenience store offers. Why don't they just charge for biodegradable plastic bags like many countries do? There should be more option for customers," an office worker named Nam said.

"They pass on the burden to customers. They make more money by selling tote bags. They are selfish. I think they should give us more discounts or give us paper bags like other countries do," a cafe staff member named Samith said.

"I think retailers and convenience stores shouldn't make customers buy cloth bags. They should prepare other kinds for us. I recently had a hard time finding a trash bag because I used to use plastic bags from stores as trash bags. The no-plastic-bag campaign makes me rethink when I want to buy things. I found I don't buy lots of items like before," Krit, a regular customer at a convenience store, said.

Despite disagreement, it is great to see the government make a big step in taking single-use plastic seriously. Yet, the idea of censoring images of single-use plastic in television programmes by National Resources and Environment Minister Varawut Silpa-archa has been criticised as ridiculous. Varuwat explained that it is similar to blurring cigarettes, liquor and gun on TVs.

"This is too far. I read the internet and found a plastic bag was invented to prevent cutting trees. It's great to ban single-use plastic, but plastic bags aren't a total evil. They were invented from great intention. We should reduce and reuse it. We shouldn't look at people who carry plastic bags as bad people. In some cases, they are still necessary," Duang said.