With the grand restoration of Wat Ratchabophit finally complete, it's time to revisit this 150-year-old gem of Bangkok

During the past four years, if you entered Wat Ratchabophit Sathit Maha Simaram, you would find scaffolding here and there. The lengthy renovation was to ensure the royal temple built by King Chulalongkorn (Rama V) would be in its full glory not just during its 150th-anniversary celebration, which took place recently, but also for years, or another century, to come. 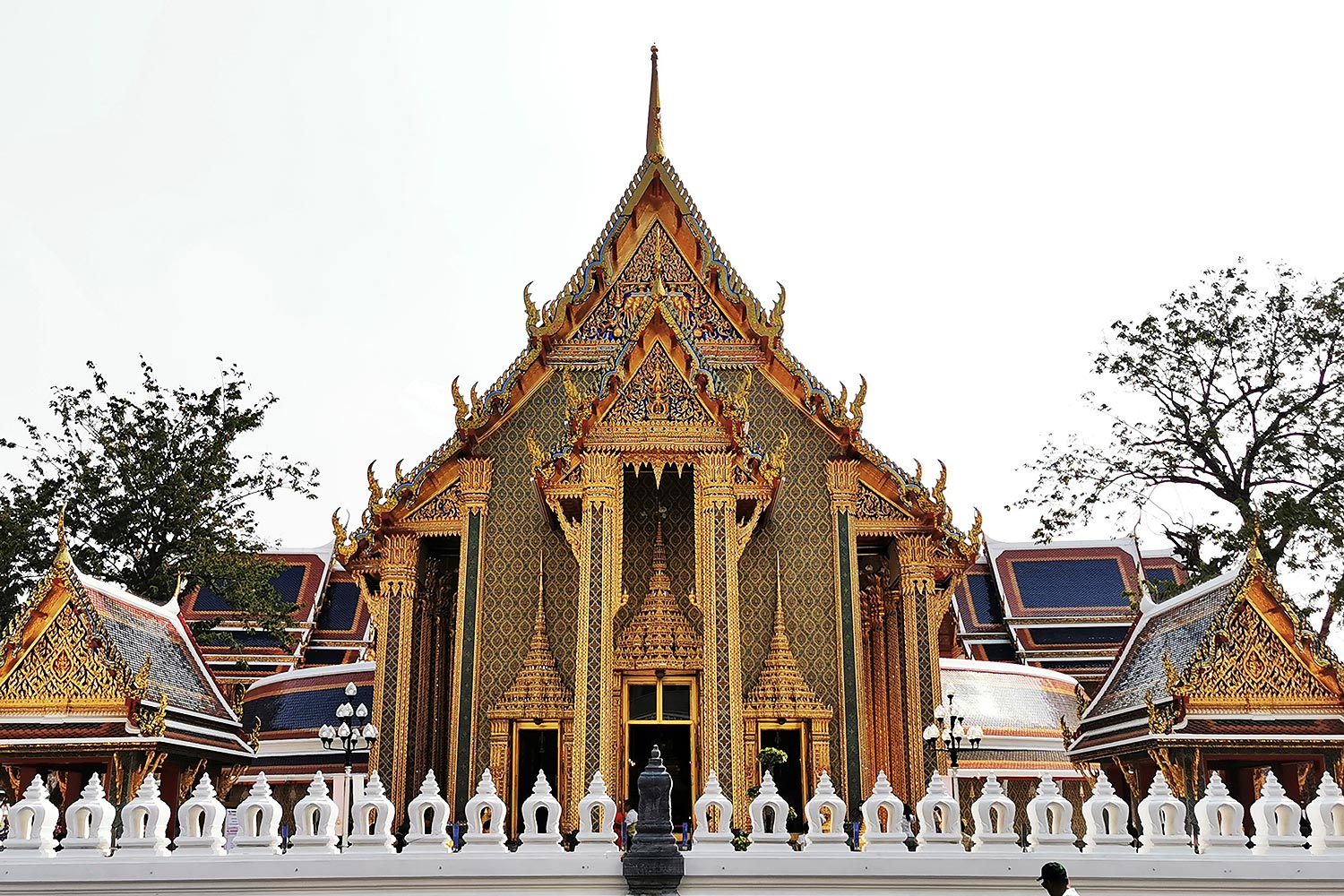 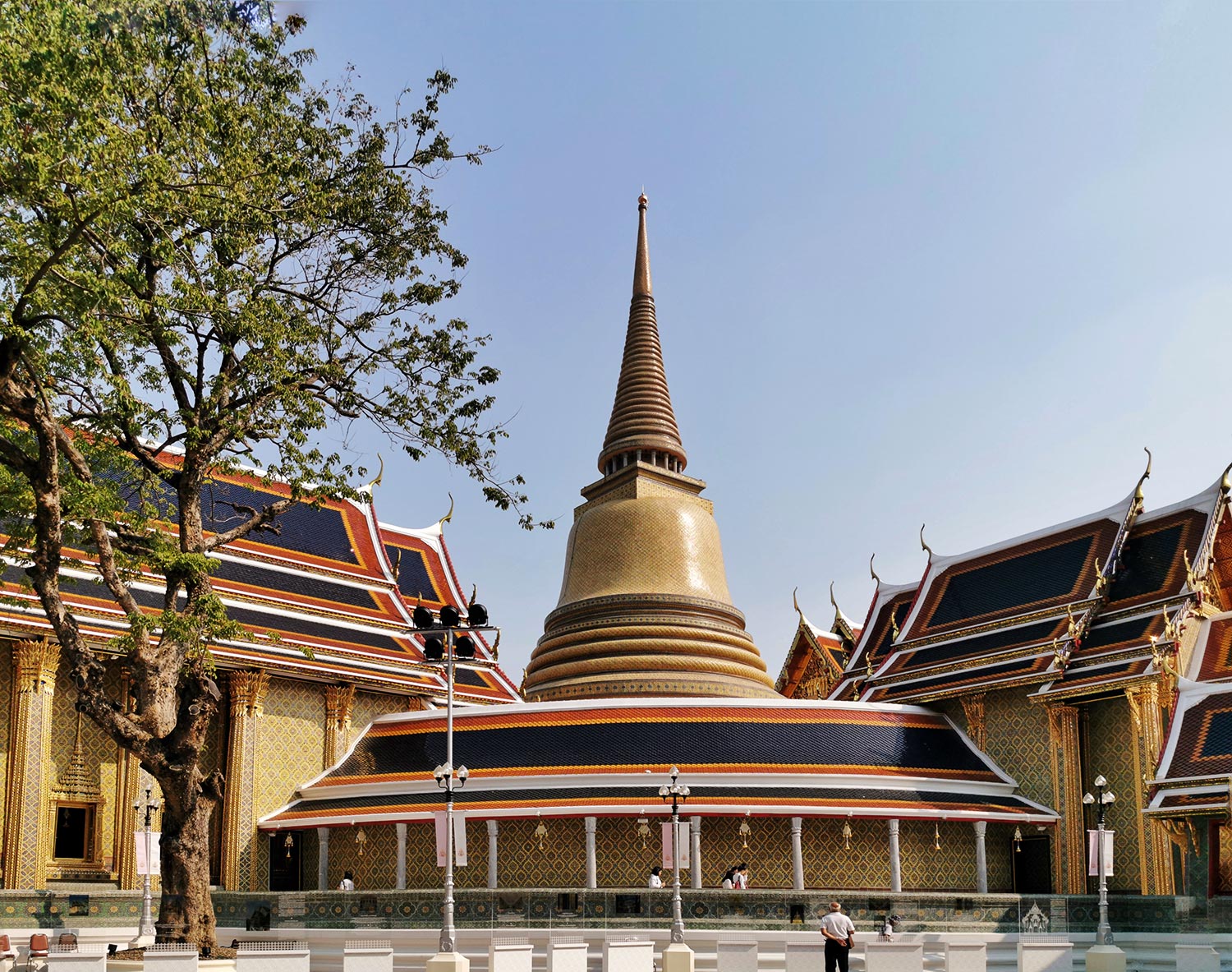 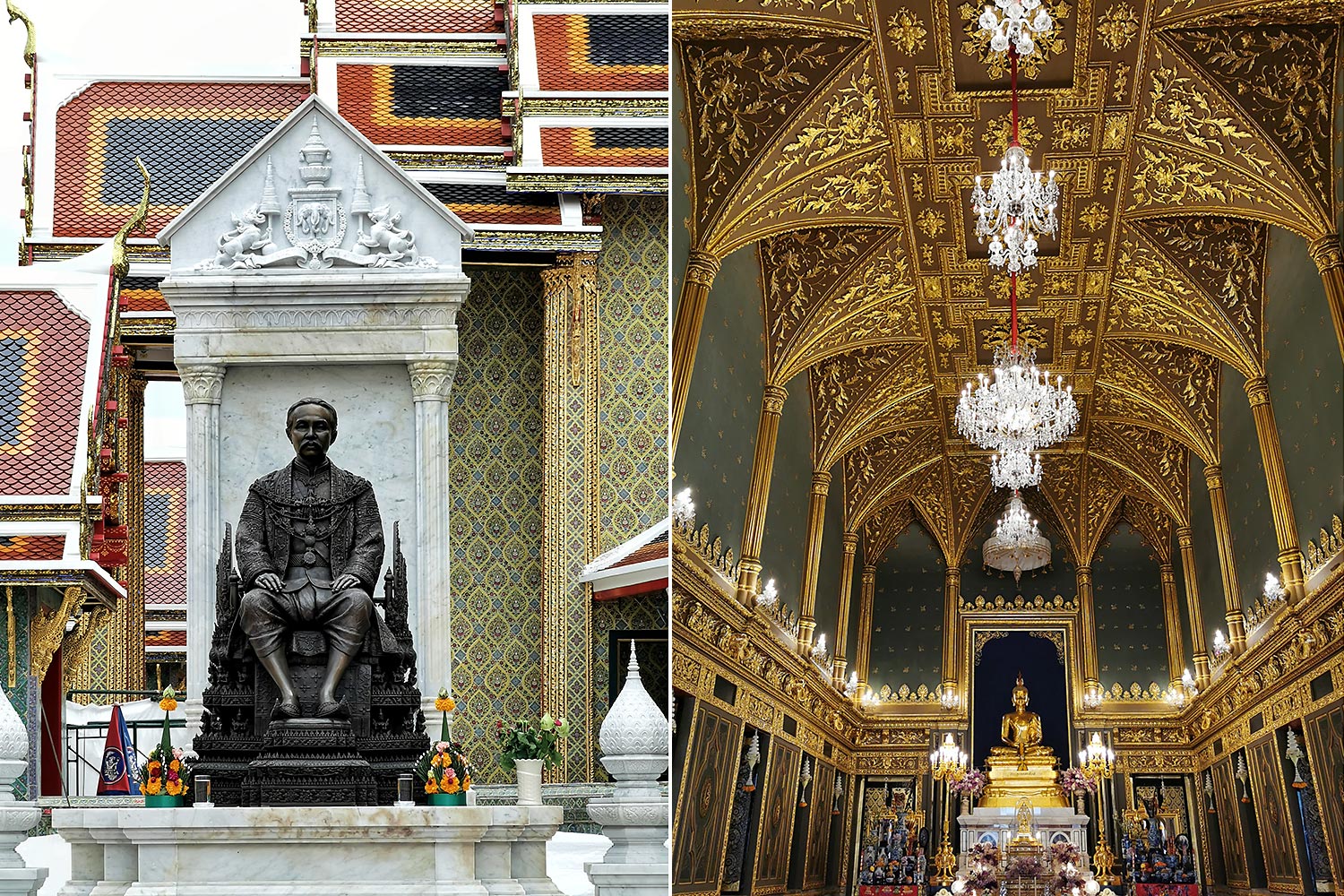 Wat Ratchabophit Sathit Maha Simaram, the symbolic temple of King Rama V and his son King Rama VII, is one of the architectural masterpieces of the Rattanakosin Period. It sits just 200m or so from Wat Ratchapradit Sathit Maha Simaram, the most important temple of his father King Mongkut (Rama IV). The words that the two Buddhist monasteries share in their names signify that both places have sema stones, which are normally placed around an ordination hall, fixed on the temples’ walls instead. The design means every inch within the walls is sanctified and ordination of a monk can take place anywhere within the temple grounds, not just in the ubosot. This may sound convenient but in practice, it is not quite so. Since during an ordination ceremony, every monk present within the sanctified area must show their consent. To prevent a monk from unknowingly showing up, resulting in the ceremony being held over again, all entrances to the temples must be strictly guarded. Only laymen are allow

Wat Ratchabophit is the residence of the current Supreme Patriarch Somdet Phra Ariyavongsagatanana. In the past, two of its former abbots also held the same title, which oversees all Buddhist monks in the Kingdom. At this royal temple of the Ratcha Wora Wihan class, visitors can pay respect to cremated remains of eight of the Chakri Dynasty's previous monarchs. The only one missing is King Rama VIII whose ashes are kept at Wat Suthat, which is a few minutes' walk to the east.

The royal remains at Wat Ratchabophit are enshrined in the gilded base and the marble pedestal of Phra Phuttha Angkhirot, the principal Buddha image of the temple's ubosot (ordination hall). The bronze statue, gilded with gold once used for the royal accessories worn by King Rama V during his childhood, is considered to be one of the most beautiful of those created during the Rattanakosin Period.

According to the exhibition put up at Wat Ratchabophit during its 150th anniversary, the Buddha statue was the work of Prince Pradit Worakan, who oversaw the design and construction of the temple from 1868. The prince, a grandson of King Rama I, was the Kingdom's top sculptor. His works include Phra Siam Devadhiraj, the statue of the country's guardian deity and the statues of the Chakri Dynasty's first four monarchs. All of these are housed in the Grand Palace.

Judging from the ordination hall, the prayer hall and the main pagoda between them Prince Pradit Worakan was also a splendid architect with fascinating creativity. The ubosot, which is distinctively Thai from the outside, never fails to amaze first-time visitors with its elegant Gothic interior -- an enticing mix of Western and Thai elements.

Prince Pradit Worakan died in 1885 but the temple project, which was full of fine details, was not completed until the reign of King Rama VI.

Later, King Rama VII ordered a major renovation of Wat Ratchabophit. The symbolic temple of his father, therefore, is considered his, too.

The recent restoration began in January 2016 and finished last December in time for the anniversary late last month. During that time, many craftsmen and workers took part in the painstaking and honourable work of preserving this national heritage. From the bottom of my heart, thank you. 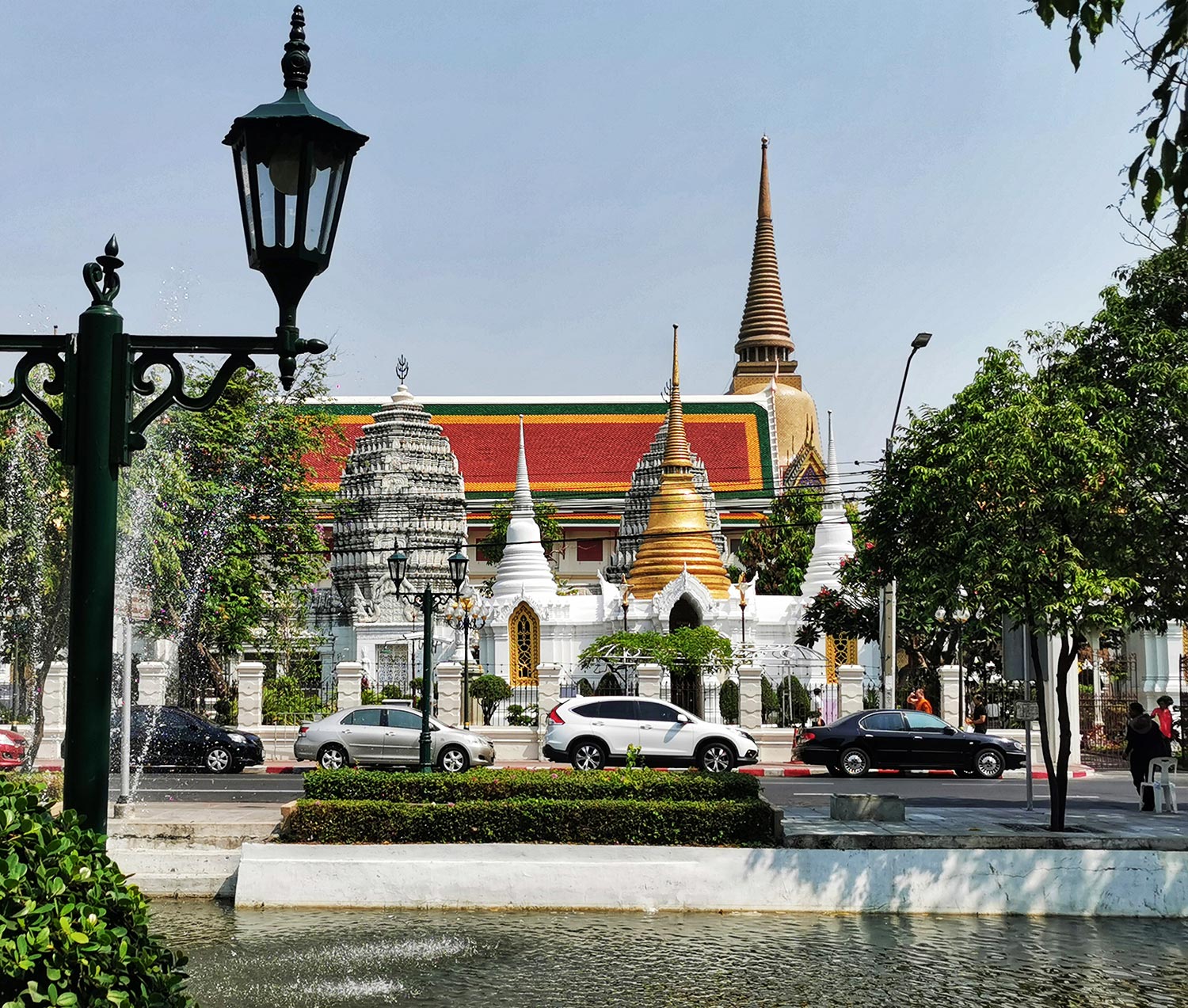 Located on the west side of Wat Ratchabophit, adjacent to Assadang Road and the old city moat, the Royal Cemetery is made up of 34 monuments dedicated to the queens and consorts of King Rama V and their children so that in the afterlife the princes and princesses would reunite with their mothers. These monuments were built in various architectural styles, some of them years or even decades before the deaths of their assigned owners. The stupa named after Queen Savang Vadhana, the grandmother of King Bhumibol, for example, was built in 1883. She passed away in 1955, long after all of her eight children, which included Prince Maha Vajirunhis, Siam’s first crown prince, and Prince Mahidol, the father of King Bhumibol. The queen’s cremated remains and those of her children are peacefully together in her monument. 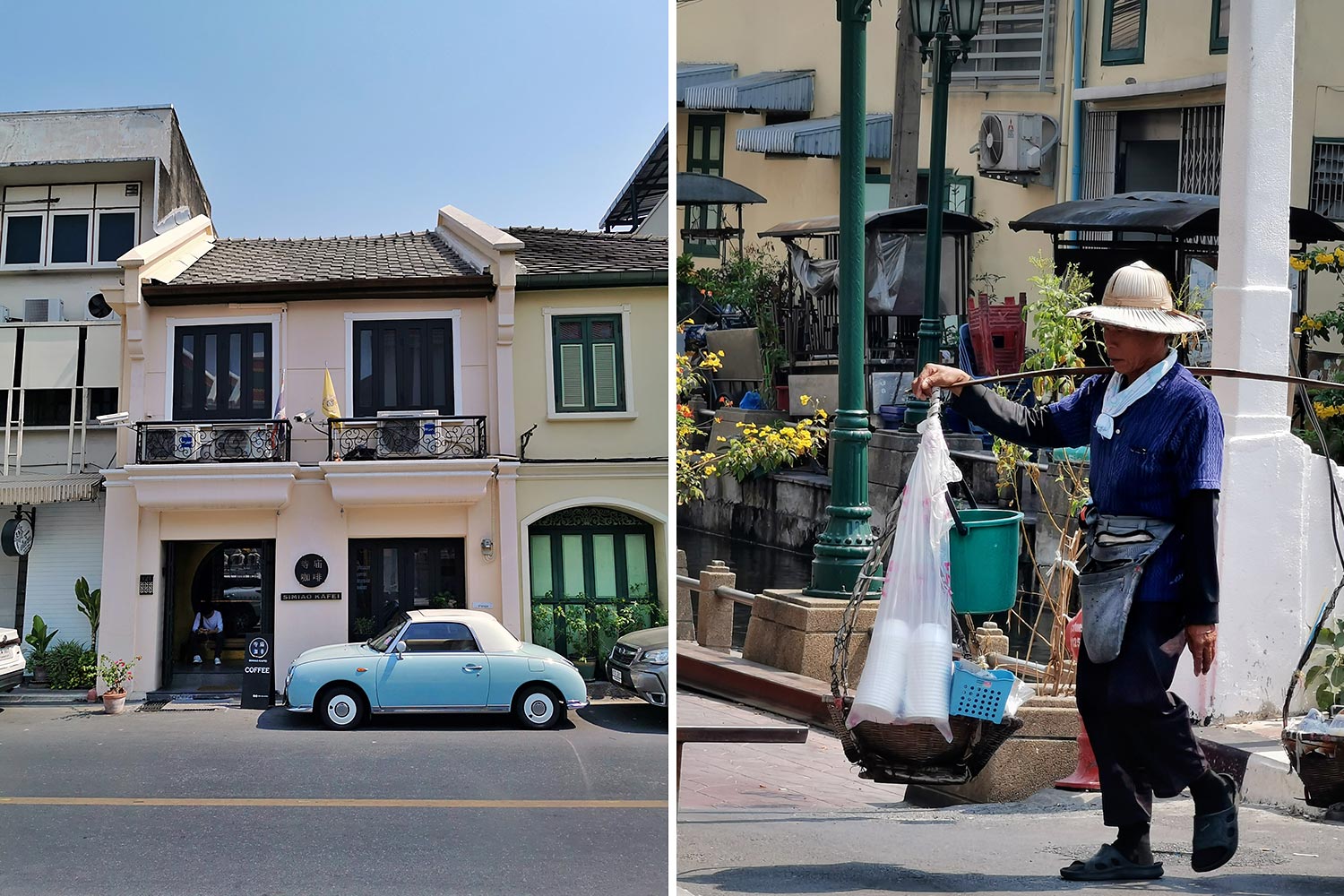 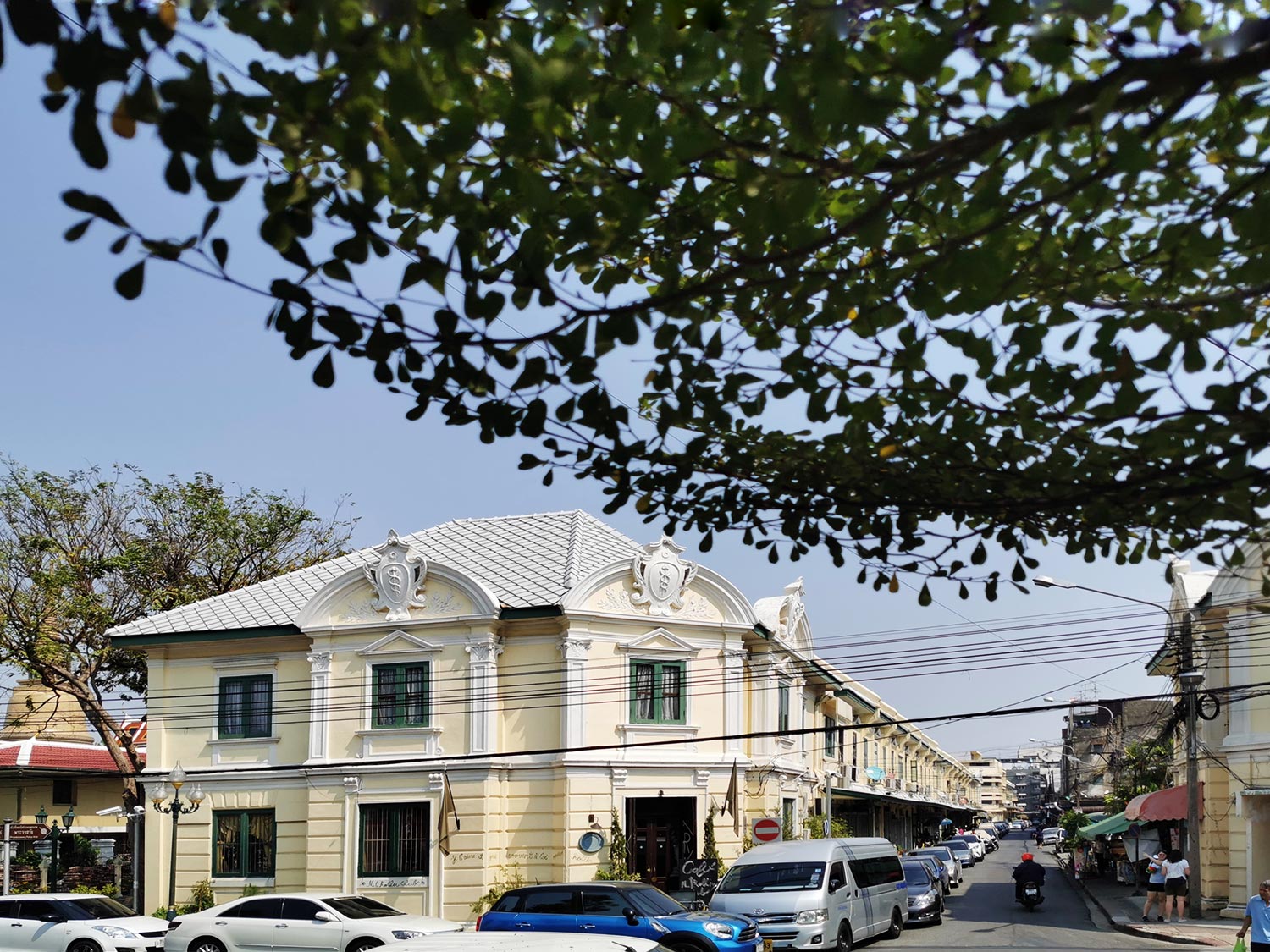 A few years before King Rama V succeeded his father on Oct 1, 1868, the constructions of Charoen Krung, Bamrung Muang and Fuang Nakhon roads were completed. The eastern sections of the first two run parallel to each other. Fuang Nakhon, where Wat Ratchabophit (established in 1870) is located, connects the two roads. It crosses Charoen Krung to the south at Phya Si intersection and Bamrung Muang to the north at Sao Ching Cha (the Giant Swing) intersection. Like several streets in the old part of Bangkok, Fuang Nakhon still has many beautiful vintage structures lining both sides. If you venture on the pathway along Lod canal on the southern boundary of Wat Ratchabophit, you can also see the back of some of the buildings and maybe also get to chat with some of the residents. While taking pictures of the old shophouses on Fuang Nakhon Road, I spotted a traditional style vendor, a sight I haven’t seen in the city for decades. In each of the baskets hung on either side of his shoulder pole w

Unlike at most temples, the wooden doors to Wat Ratchabophit depict guards in Western-style military uniforms. Traditional Chinese entrance guardians can be found on the doors in inner areas. 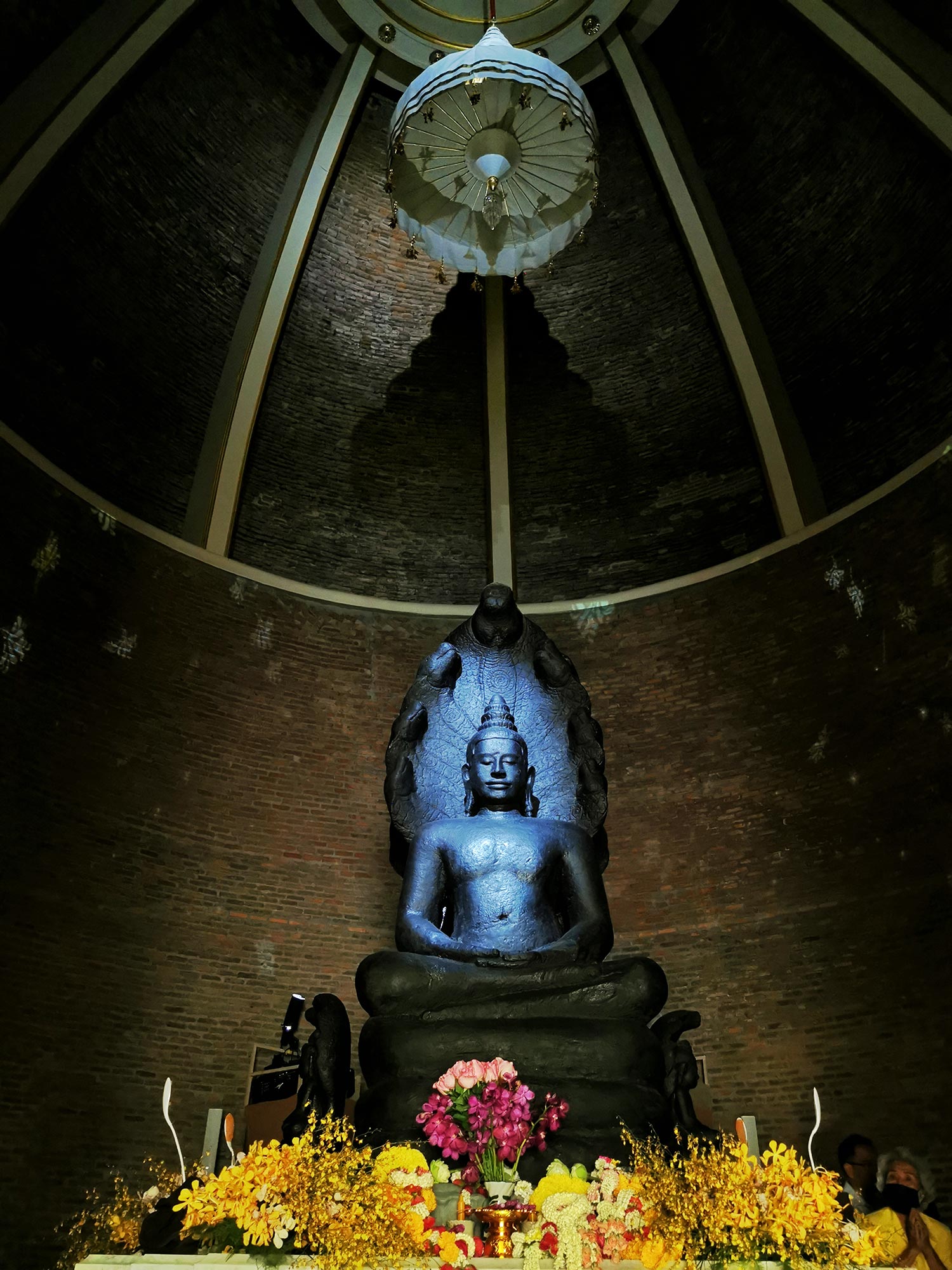 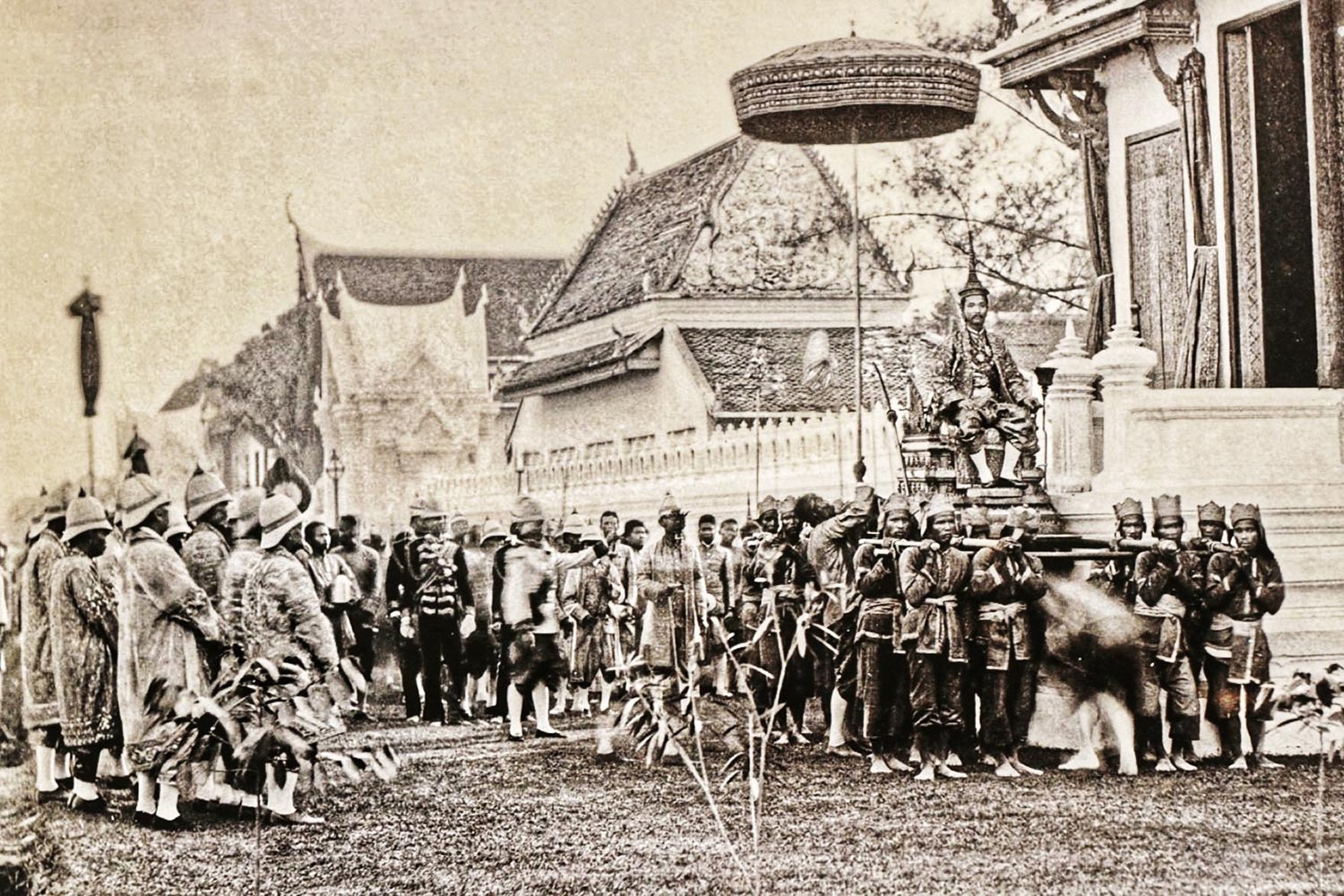 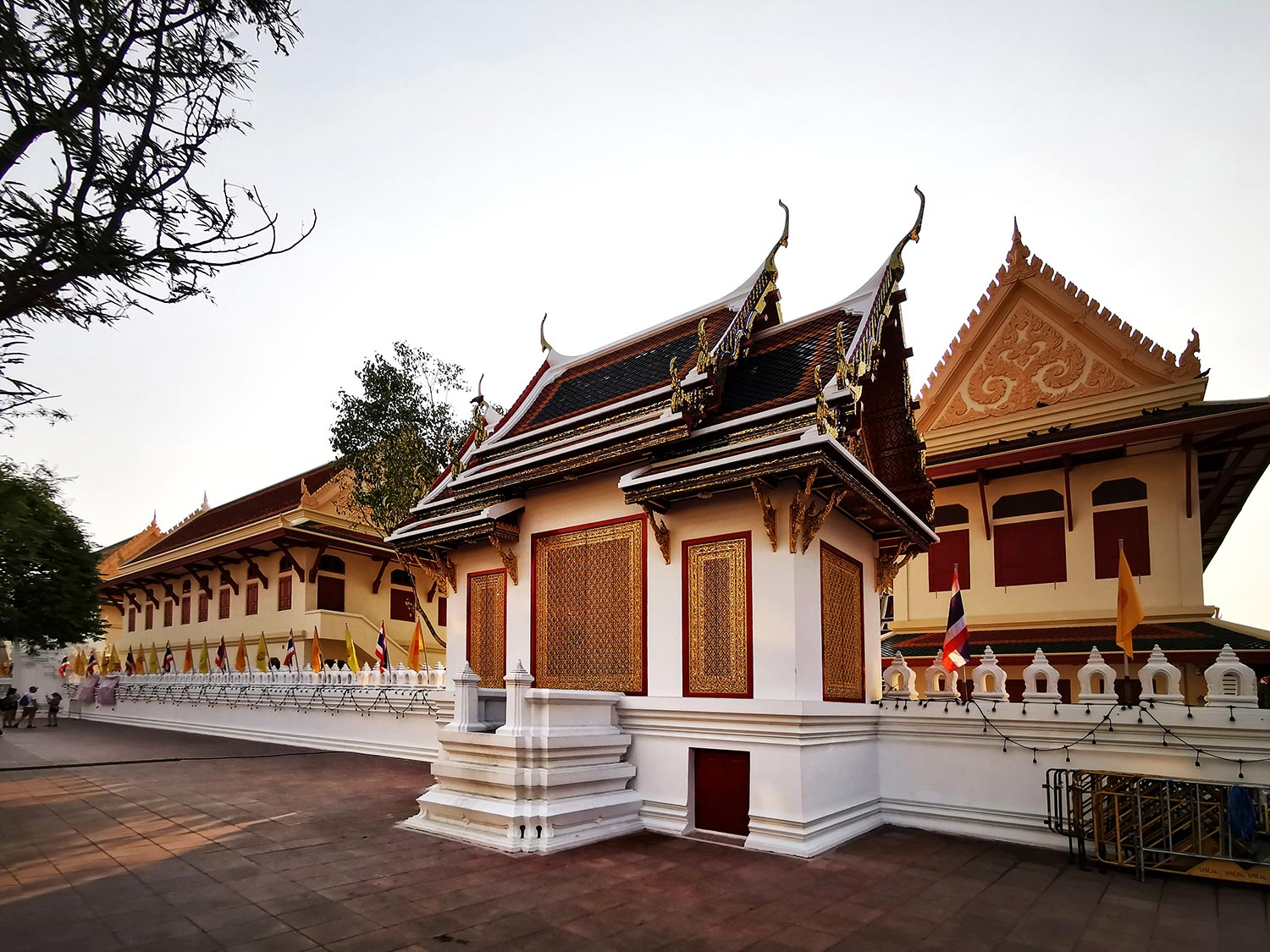 Whenever a king visited Wat Ratchabophit in a ceremonial procession, this pavilion on the northeastern corner of the temple, known as phlapphla pluang khruang, served as the official entrance. After the king stepped into the pavilion from his palanquin, he would take off the headdress and change his attire before proceeding into the temple through the door on the other side of the pavilion. This photograph of King Rama V in front of the phlapphla pluang khruang at Wat Ratchabophit was taken by the first professional Thai photographer, Luang Akkhani Narumit, better known as Francis Chit. 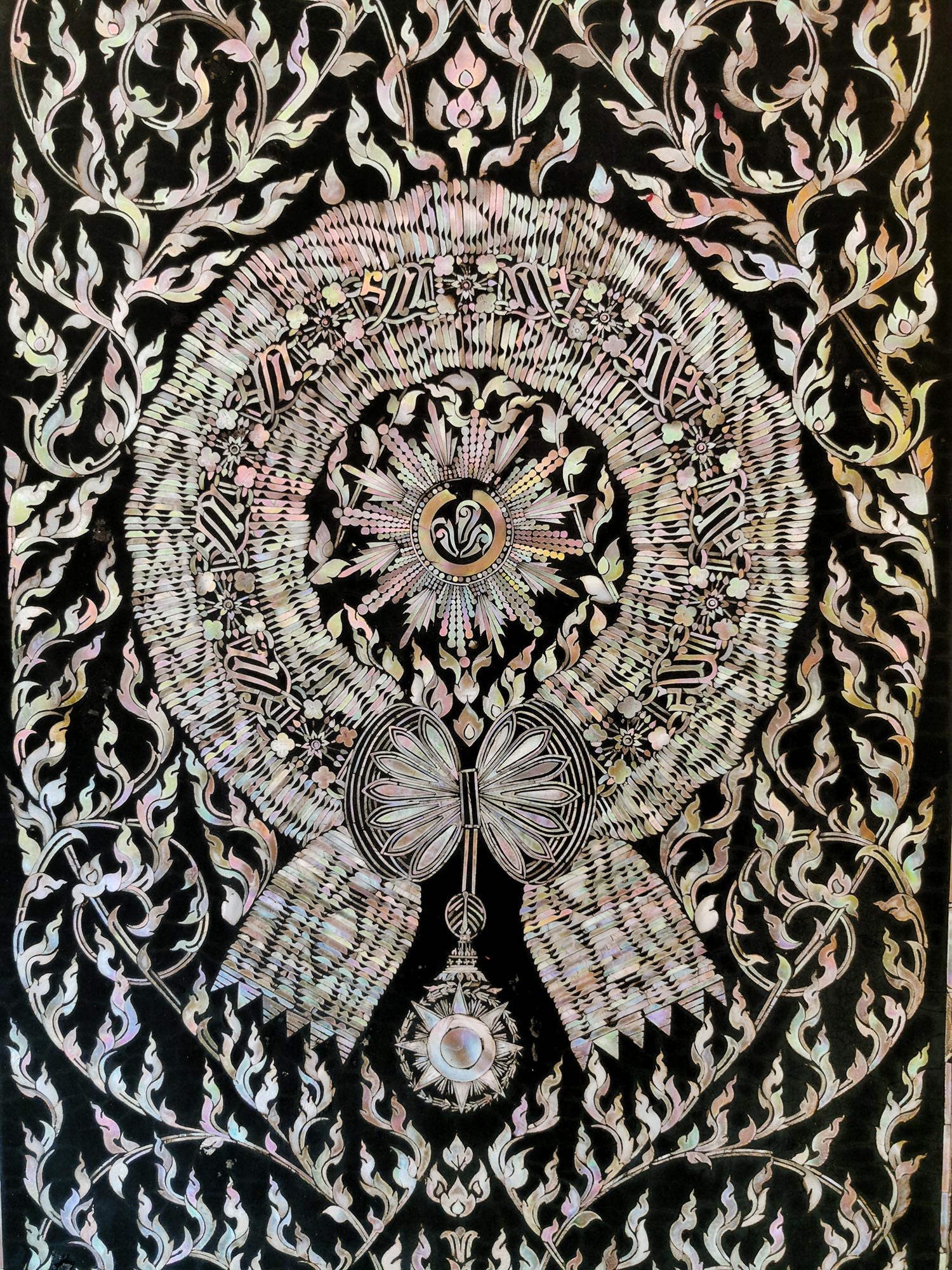 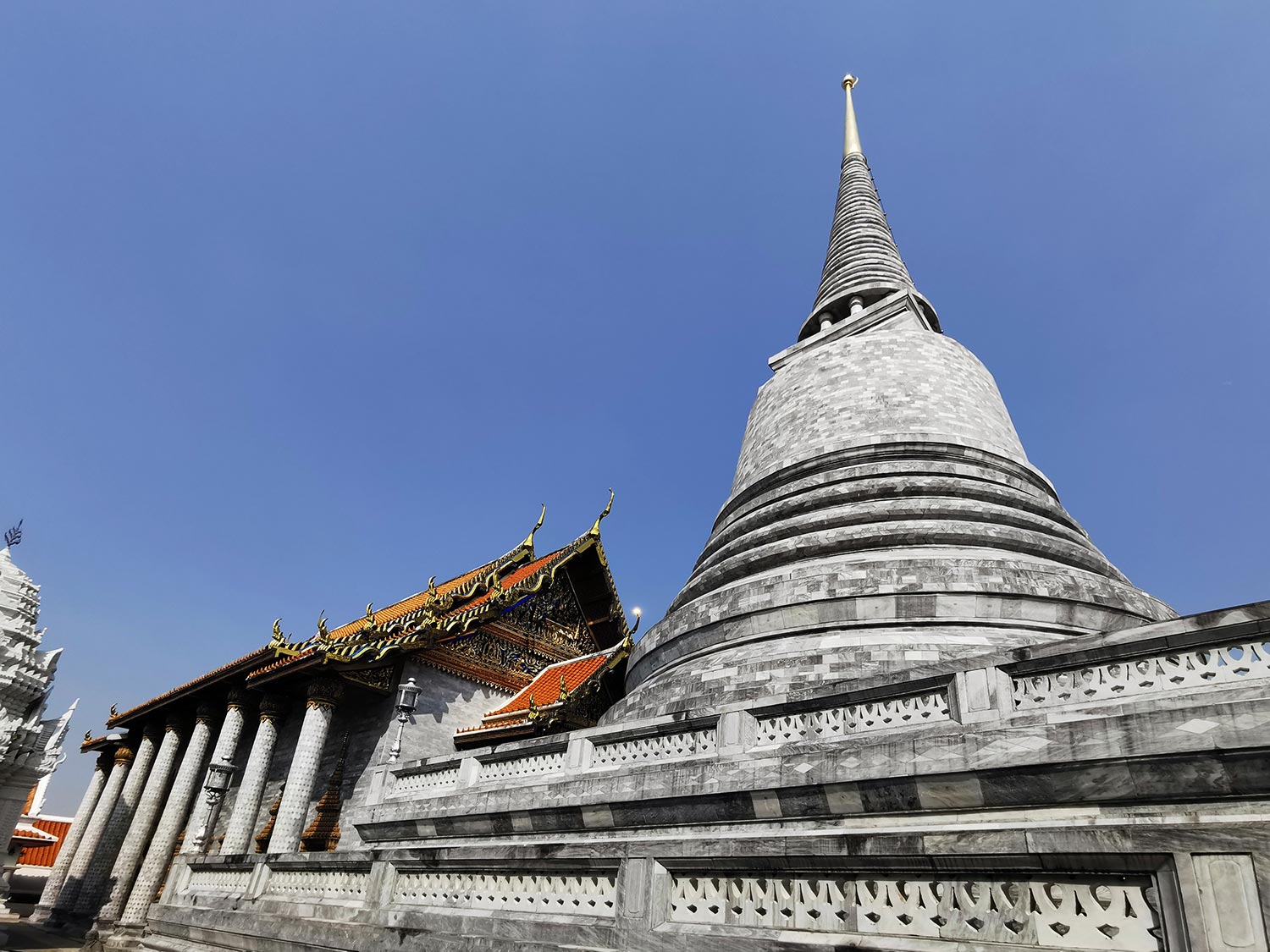 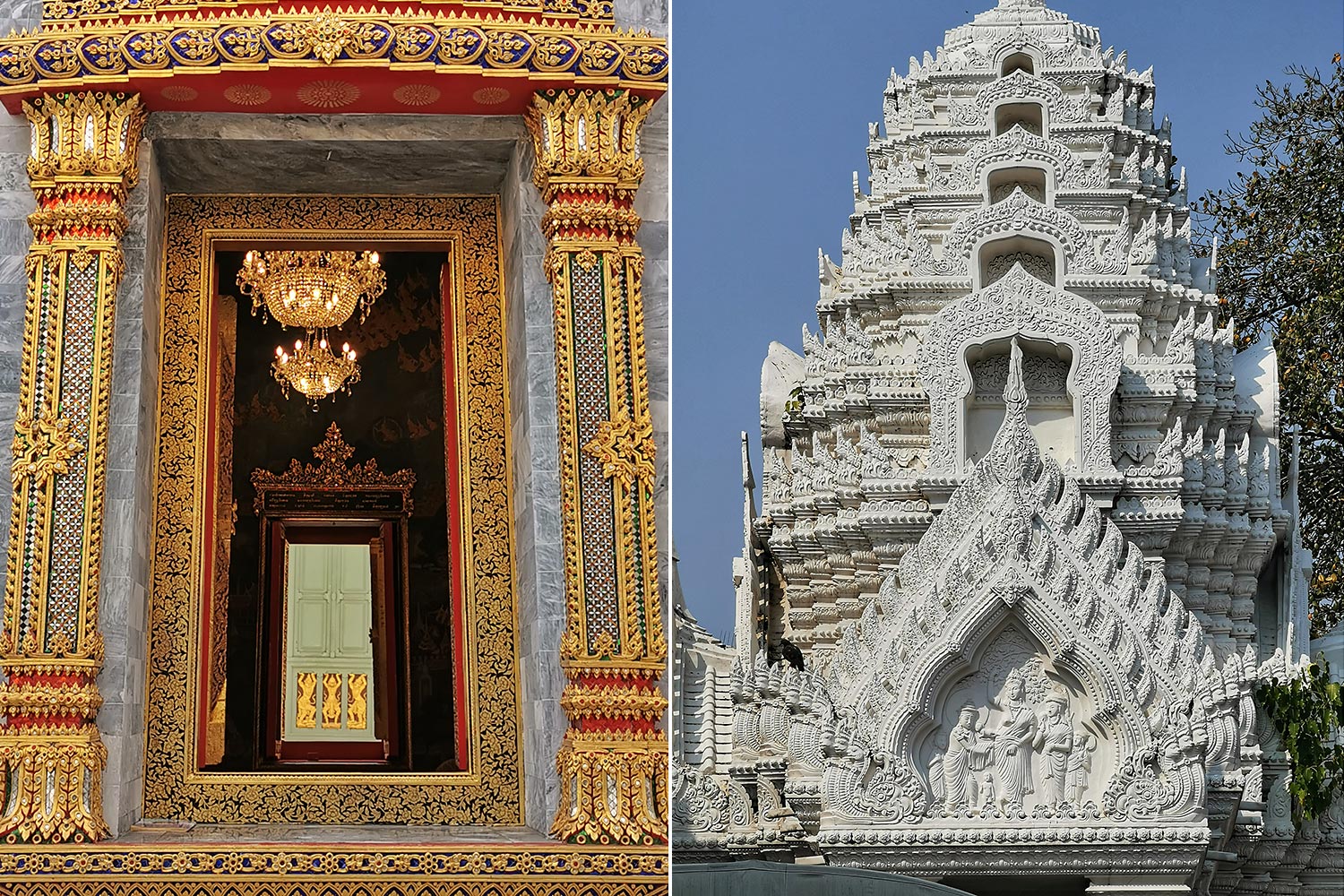 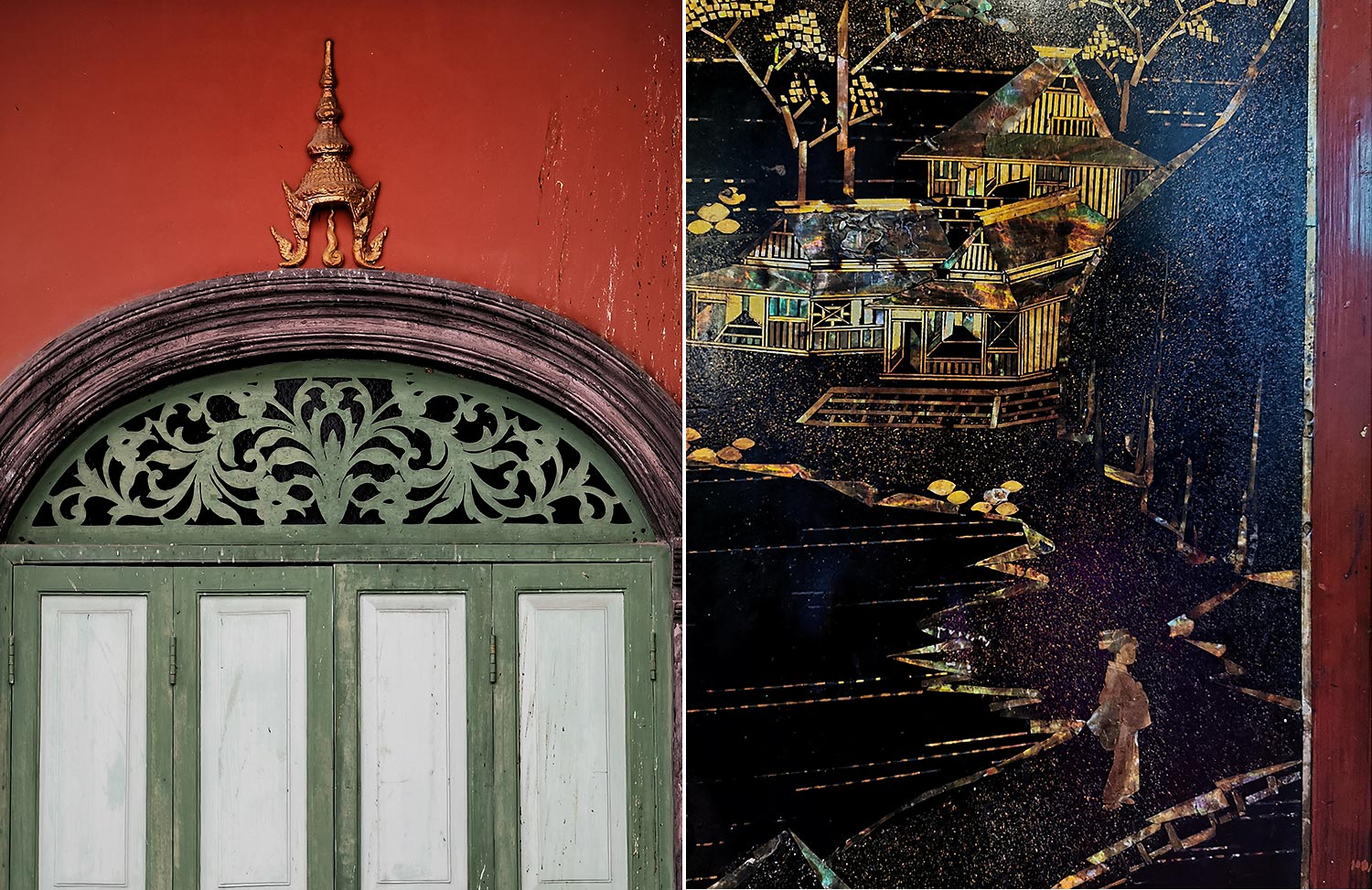 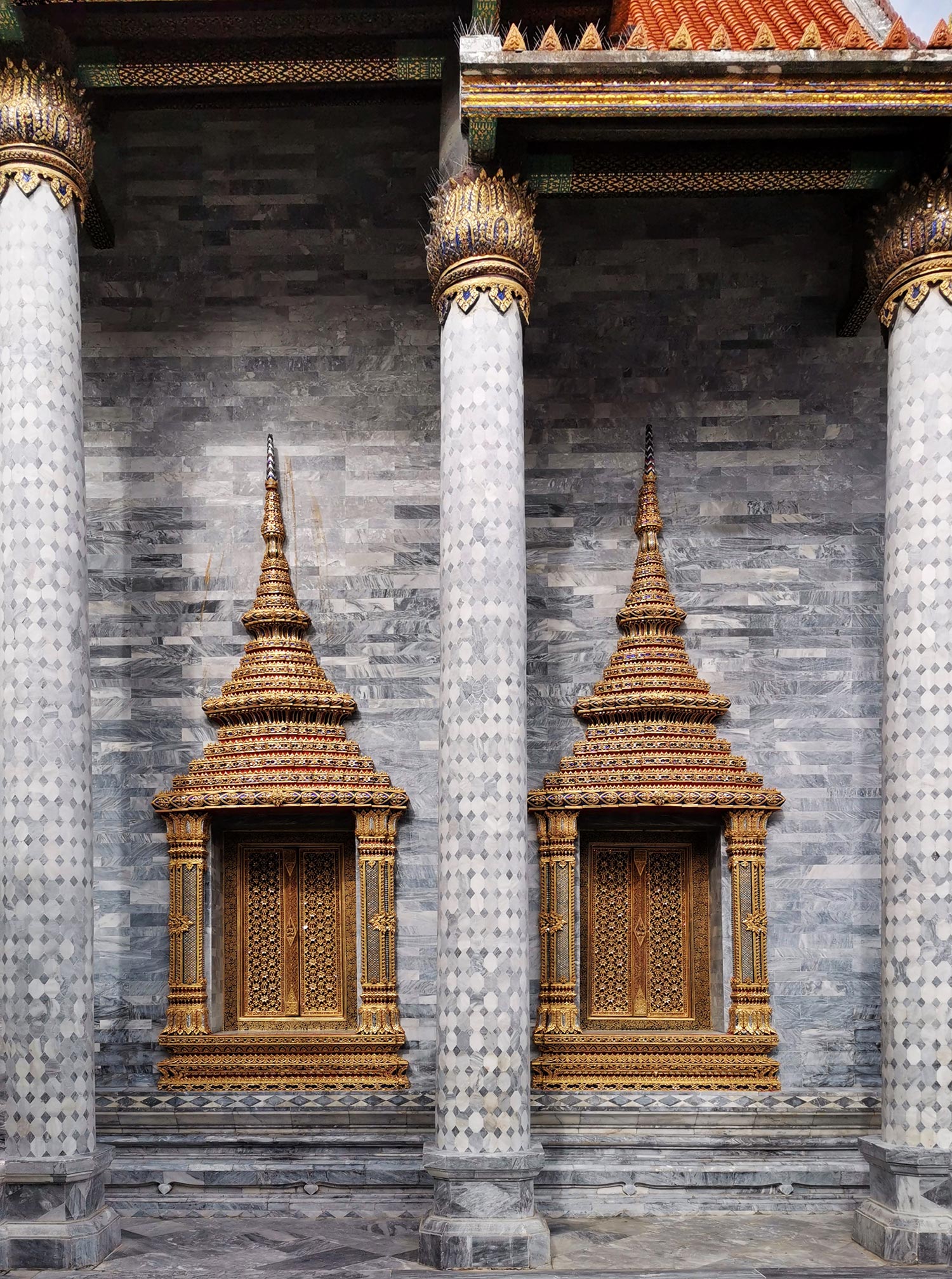 Wat Ratchapradit Sathit Maha Simaram is the symbolic temple of King Rama IV. Like the nearby Wat Ratchabophit, it is small but packed with stunning works of art. The temple features a harmonious blend of Thai, Chinese, Western, Cambodian and Japanese craftsmanship. Built in 1864 with marble, it predated the ordination hall of Wat Benchamabophit, which gave the famous temple in Dusit district the nickname “Marble Temple”, by four decades. 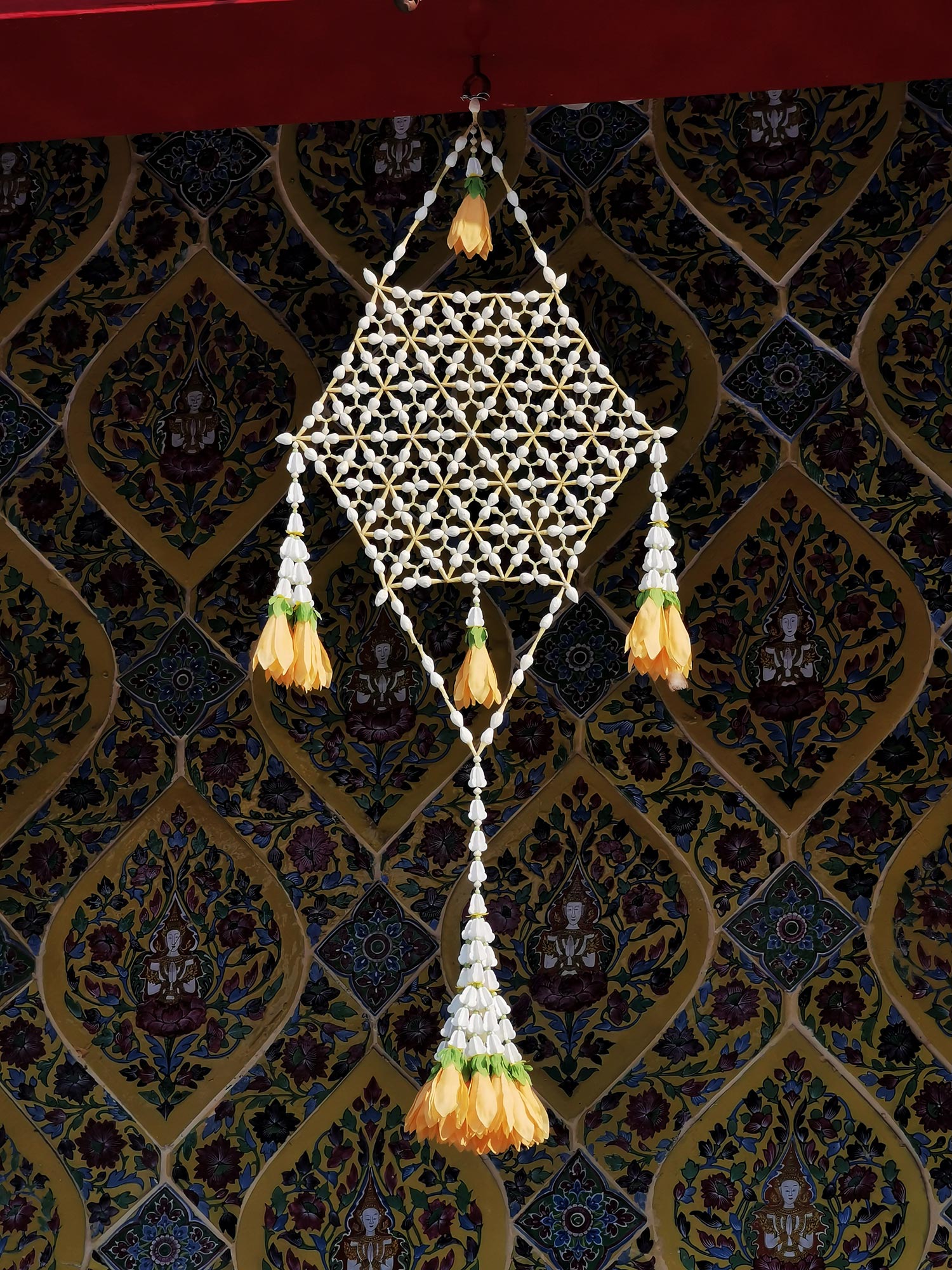 Roi Takhai is a kind of traditional Thai decoration created with fresh flowers. This piece made with jasmine, magnolia and crown flowers was one of the many that adorned the ordination hall of Wat Ratchabophit during its recent 150th anniversary celebration. While the entrances to Wat Ratchabophit portray royal guards in Westernstyle uniforms, the doors to Wat Ratchapradit are protected by warriors that look like Chinese men in Thai costumes. 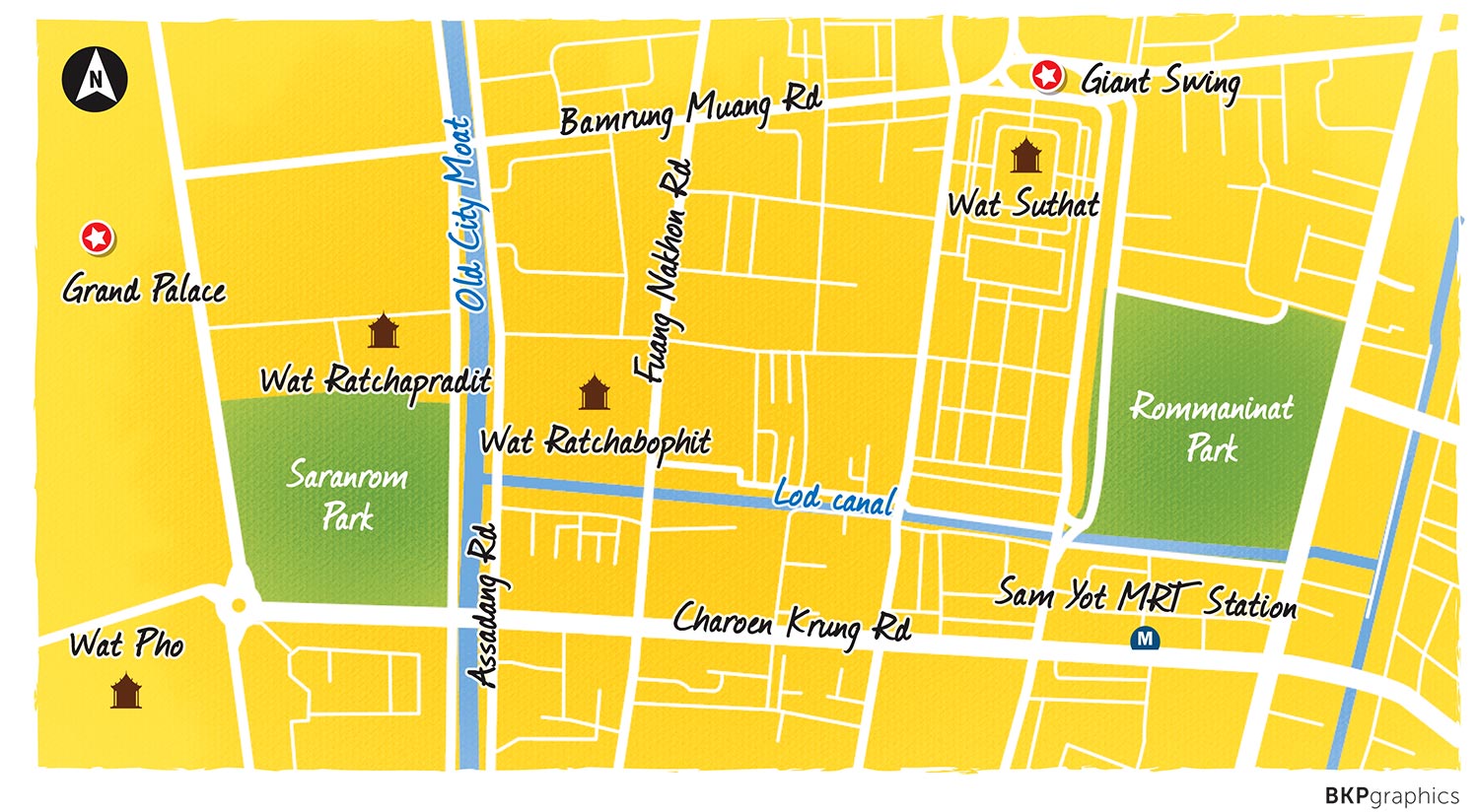