Bizarre tales of love in Thailand

Happy St Valentine's Day to all celebrating and to those who aren't (you're not really alone with Big Brother watching, are you?). While we'll see a lot of mushy-gushy posts in the next 24 hours and our social media feed flooded by pictures of ladies with chocolates and roses or guys clad in suits ready for dinner dates, there have been plenty of love stories in Thailand that are pretty dang insane. Some are quirky, some are funny, some show the great lengths that people will go for the ones they love. Whatever the case, these are all stories worthy to commemorate St Valentine's Day.

The Scorpion Queen and the Centipede King

When people talk about a "match made in heaven", it's usually along the lines of having the same interests and hobbies, having similar life goals or loving the same pets, and even then pets are usually dogs and cats and not creepy crawlies. That's not the case with Kanjana Kaetkeow, the Scorpion Queen, and Boonthavee Saengwong, the Centipede King. Kanjana holds a Guinness world record for spending 32 days in a glass cage with scorpions, while Boonthavee holds the local record for spending 28 days with centipedes. Keeping with the theme of their creepy love story, the two were wed at Ripley's Haunted House in Pattaya clad in bloody and gruesome wedding attire. They also said that they planned to consummate their marriage in a coffin. Whether there were scorpions and centipedes present, I'm not sure, but the coffin was already a bit much. 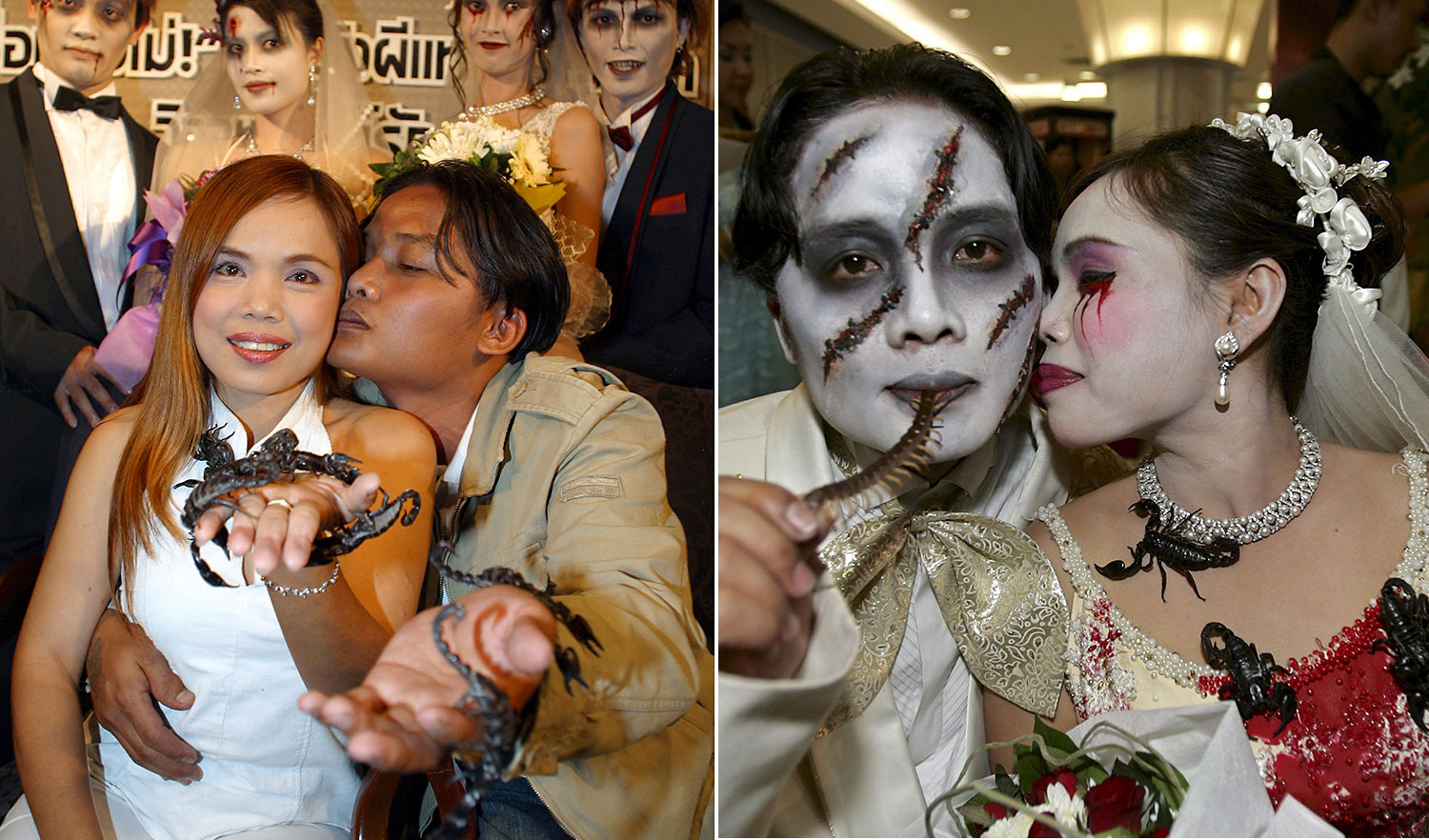 Undying love is not uncommon and this story is the epitome of that. Ironically though, someone did die. Chadil Deffy, a TV producer, and his girlfriend were together for 10 years and whenever she brought up marriage, he was always dismissive. You can imagine just how much he regretted his actions when his girlfriend died in a car accident. Feeling guilty and remorseful, Chadil decided to give his girlfriend her wish even though it was already too late. Dressed in a tux and top-hat, which complimented his fashionable moustache, he married his girlfriend at a hybrid wedding/funeral event. His girlfriend's body was dressed for the occasion in a wedding gown. He put a ring on her finger and gave her a kiss much like any other wedding just minus the living bride part. And in his wedding "speech" on FB, Chadil delivered a few words of wisdom to his well-wishers: "It is the mistake which we could not go back in time to correct. Remember, life is short." 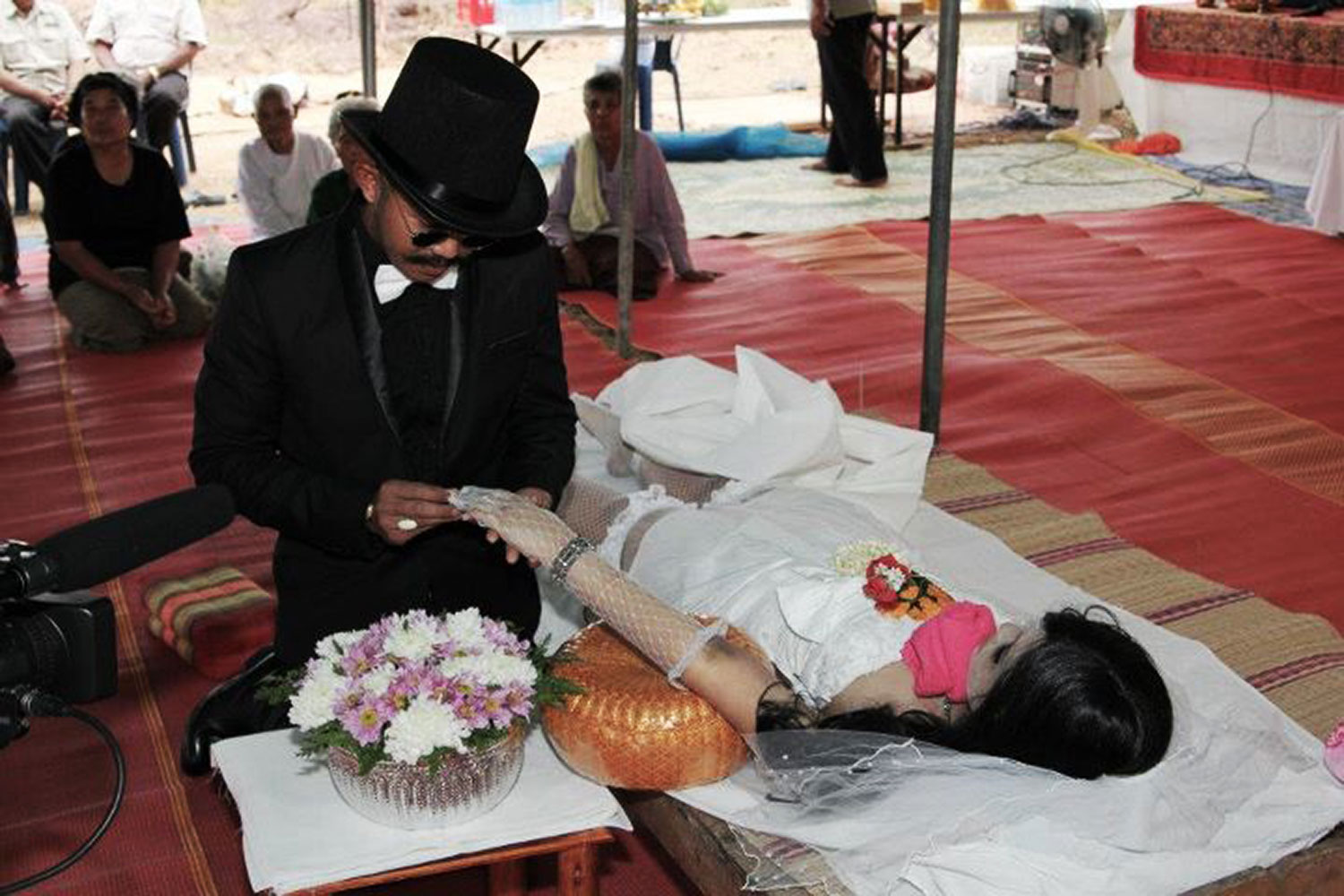 Sarasin Bridge is the first bridge to connect Phuket and Phangnga, and was constructed in 1951. Presently, it serves as a pedestrian bridge and has become a spot for tourists and locals to take pics for their IG and FB. However, the bridge is arguably more well-known for a tragic love story that occurred in 1973, a week or so after St Valentine's Day. Even though the tale seems like a script for a Thai soap opera, it is all true. Dam was a bus driver while Gew was a college student, who came from a rich family. Gew was a constant passenger on Dam's bus and eventually, the two started developing feelings for one another. However, much like Romeo and Juliet, when the two sought Gew's father's permission for marriage, he refused. He said that his daughter was meant to marry someone rich and not a bus driver. Once again taking their lead from Shakespeare's tragedy, the two lovers then decided that if they couldn't be together there was no point in living. Binding themselves together with a loincloth, the two jumped from Sarasin Bridge. Tragedy, thy name is not only Shakespeare. 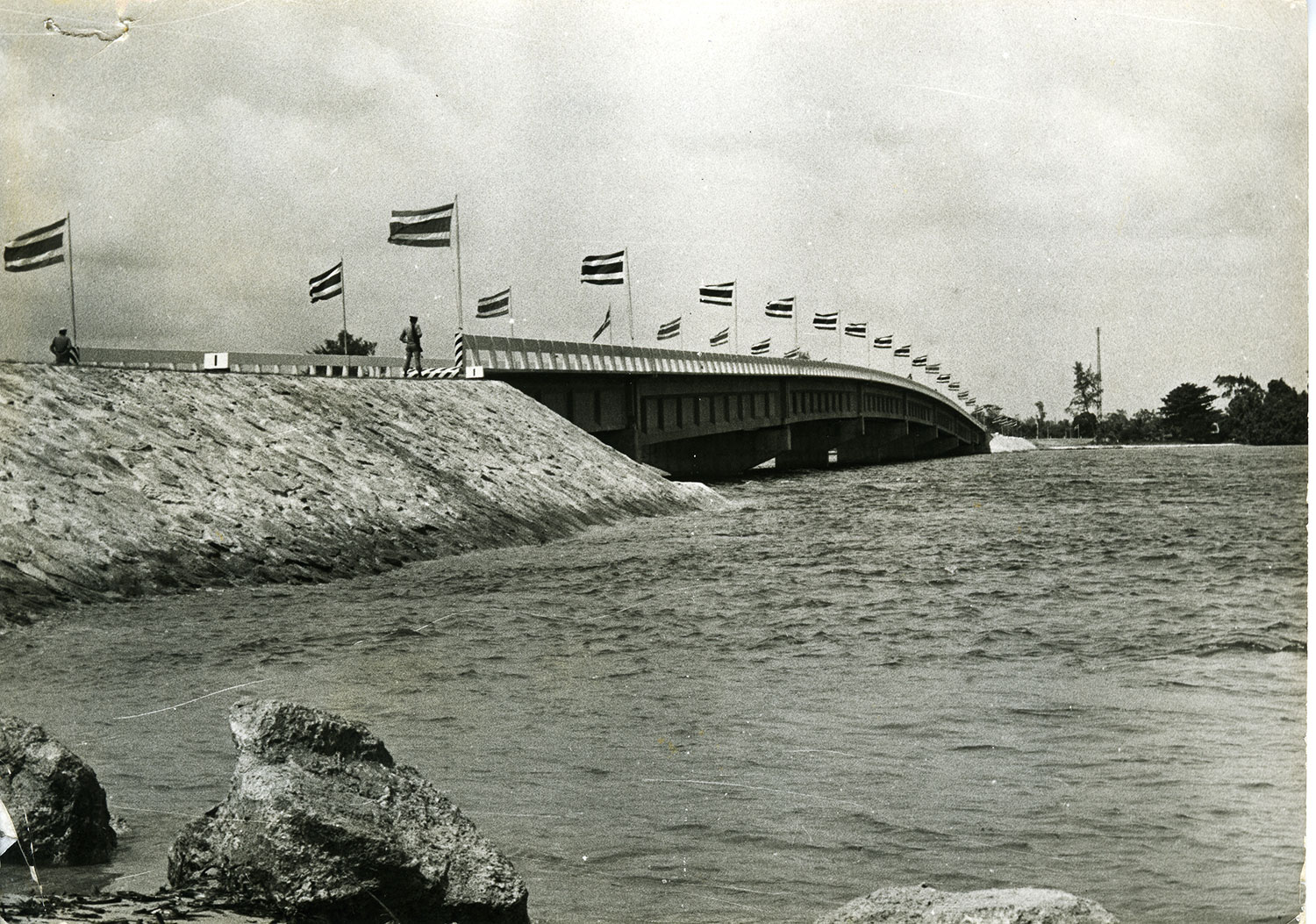 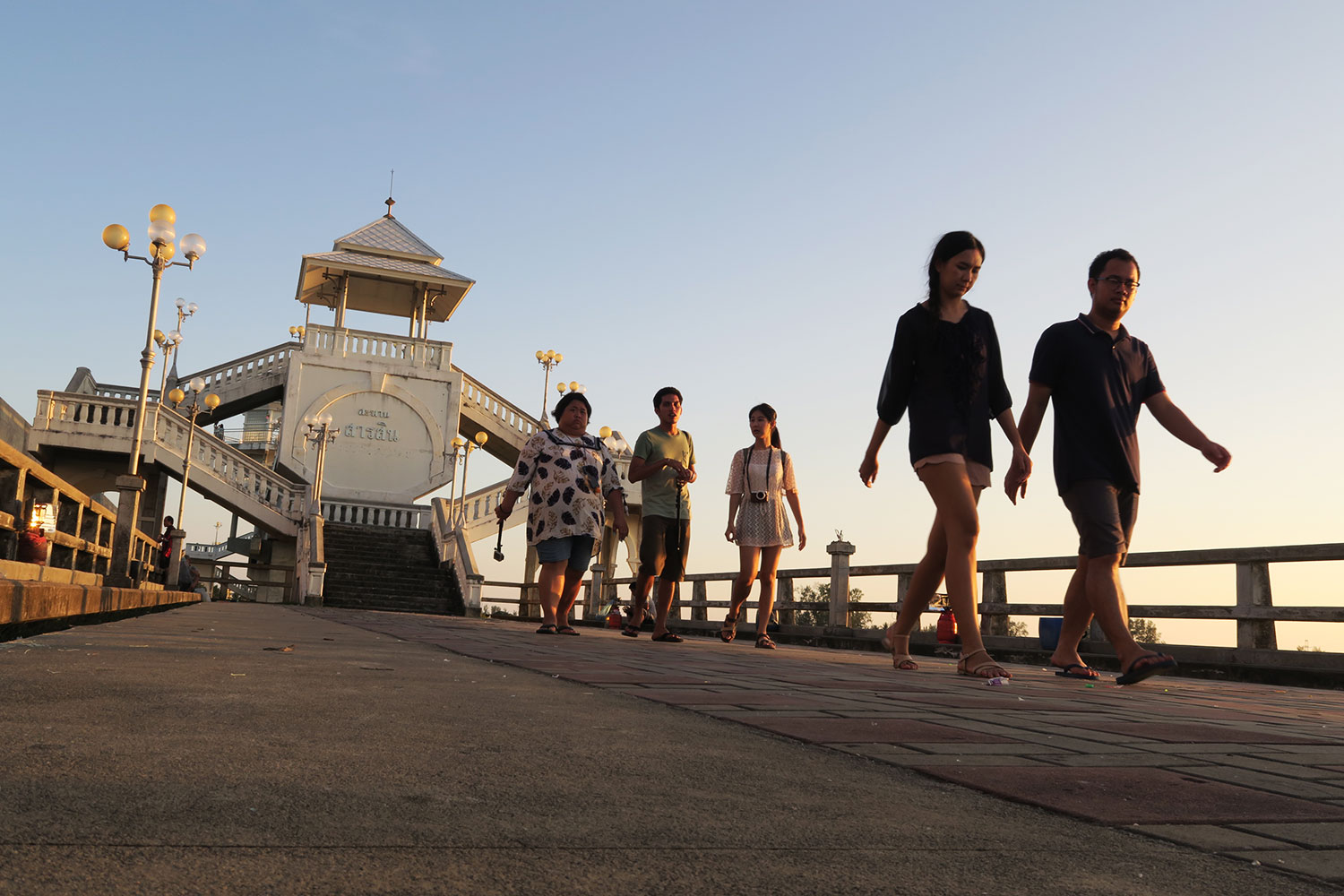 When love is dying

Heartwarming and heartbreaking sometimes go together, and that's the case for this next story. Thai Visa is a popular online forum where foreigners share stories, useful info, news and tips about living in the Kingdom. In 2005, "richardb" posted on the Pattaya forum asking for help. His ex-girlfriend living in Thailand, who he still had "great affection for", was taken to hospital. Her friends called him to say she was sick but gave no details. Since he was in the UK and couldn't speak Thai, he asked if anyone could contact the hospital and update him on what was going on. A few members raised concern that it may be a sham though the friends did not ask Richard for money. It seemed that they were calling him so that he could fly to Thailand to see her since the illness was serious. A number of posts later with many of the forum members offering assistance and best wishes, the girl, "Aom", is revealed to have HIV. Richard posted saying maybe this is why she broke up with him. He then posts about helping Aom with money while he got ready for a trip to Thailand. Other forum members helped out in taking care of Aom, especially with moving her to a facility for HIV patients. Unfortunately, Richard updated the forum that Aom passed away without him getting to see her. The silver lining in all this was that forum members were encouraged to raise money for the HIV facility where she was taken, showing that in times of need, people can come together for the cause of something good. 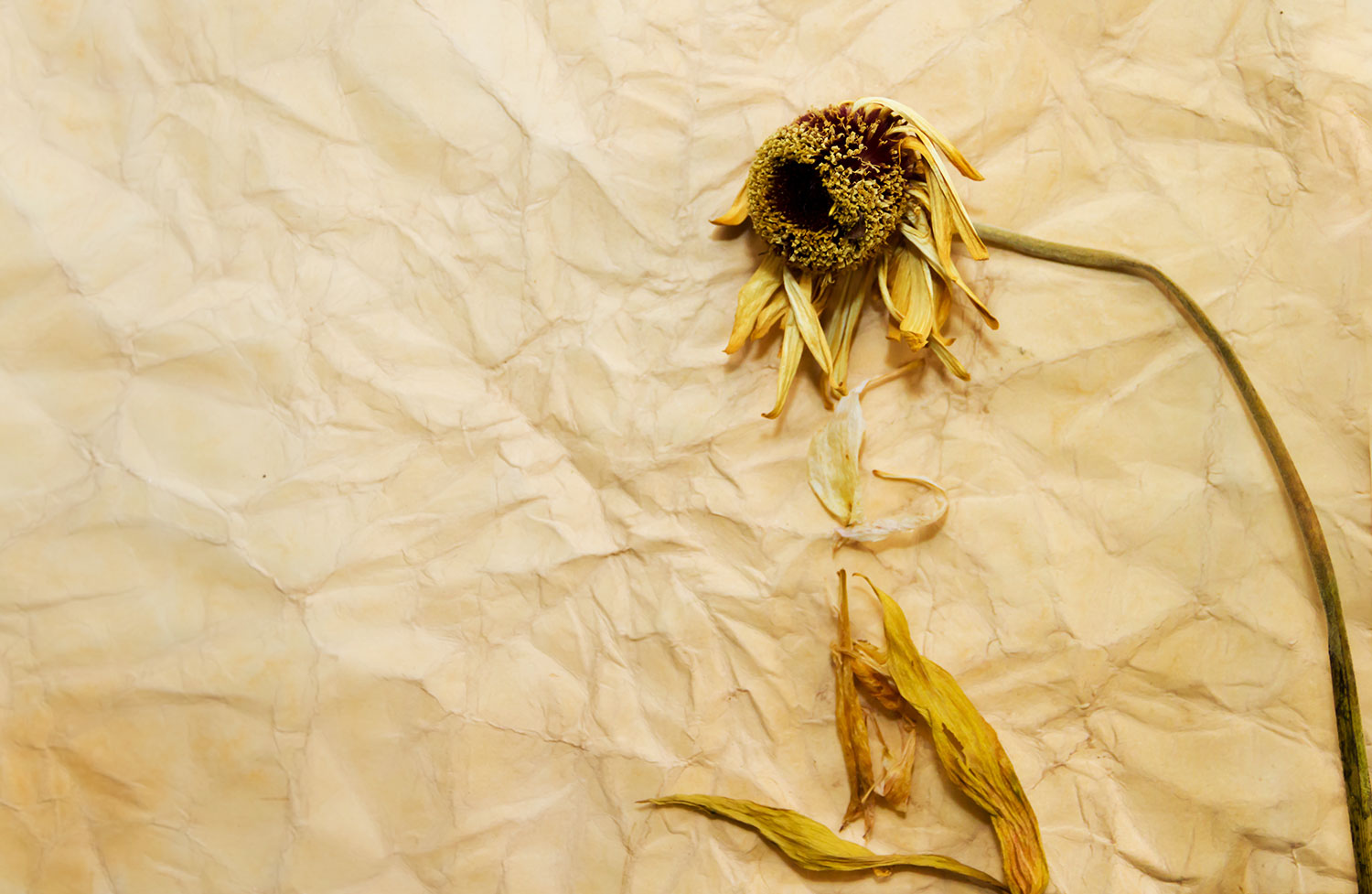 Another story that closely resembles the tragedy of Shakespeare's star-crossed lovers is told by artist Sudaporn Teja. One of her exhibitions has a prologue that recounts the story of Pranote Wisetpat and Somchai Jindakaew, a transwoman and a cis man. In 1967, the two died by taking poison much like Romeo and Juliet. Their relationship was described as turbulent and marred by intense jealousy. After several failed attempts, Pranote committed suicide. Heartbroken Somchai decided to be ordained as a monk for three days to make merit on her behalf before taking his life 13 days later. In the last letter he left for his family, he asked that their coffins lie in the same pavilion at Wat Hua Lamphong. It would match with the exhibition's overall theme of love, loss and equality for the LGBTQ+ community. 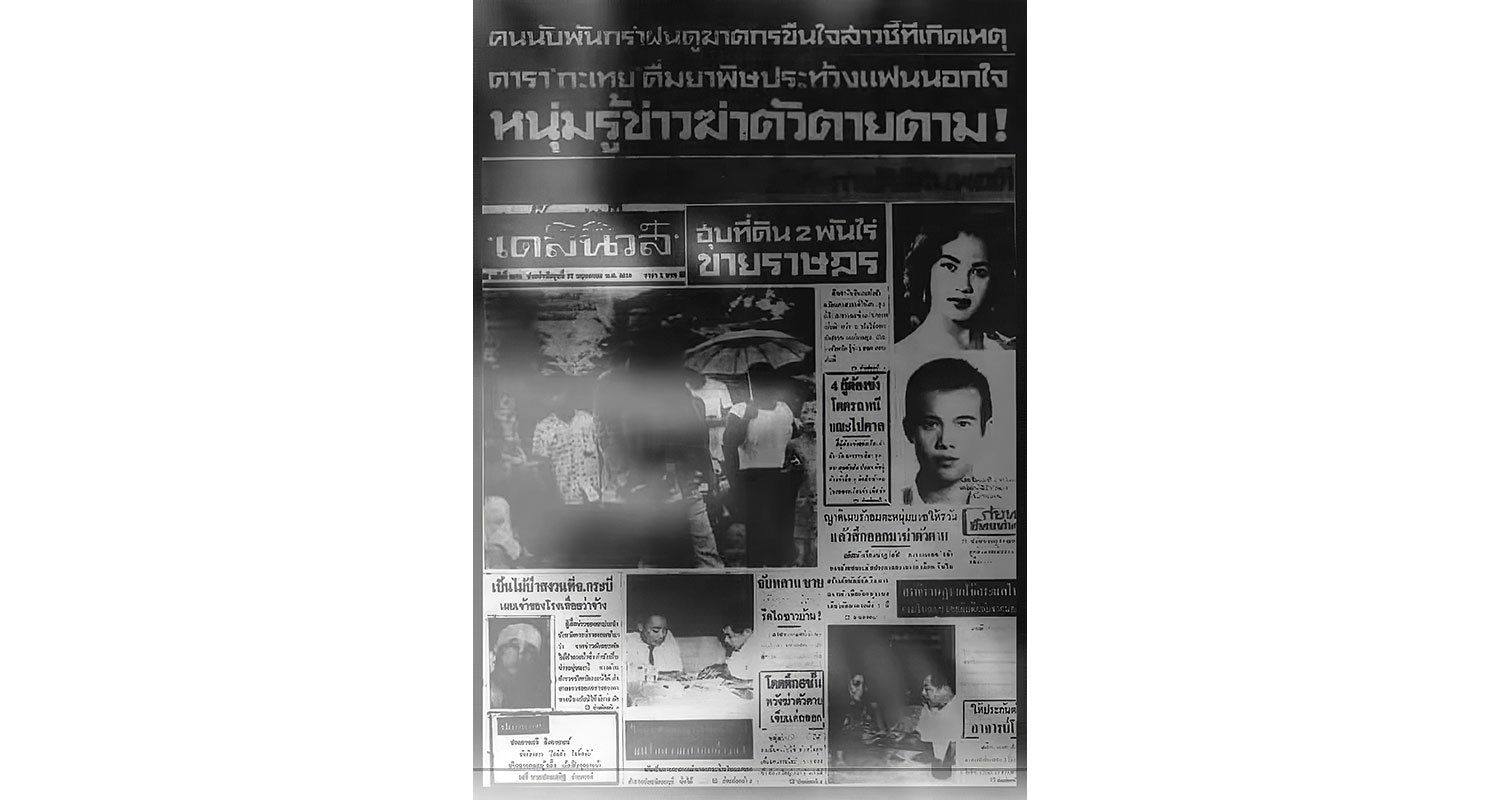 These aren't necessarily stories but it would be a mistake not to include these. Thailand is a popular wedding destination because of its beautiful beaches, gorgeous vistas and many, many wedding packages on offer. But if you didn't know, it is also the home to many quirky wedding ceremonies. One of the most famous ones is the Trang Underwater Wedding Ceremony where couples don scuba gear while in their wedding attire and get married in the ocean. This unique ceremony takes place annually. Other out-of-the-box weddings include one held at Tap Lan National Park in 2010, where couples had to climb up a cliff, sign their marriage certificate while hanging off the ground. I guess this was one for the thrill-seekers or those who want to work out their core while getting hitched. An adventure-themed wedding complete with an obstacle course that included a giant flower-boulder hurtling towards couples reminiscent of Raiders Of The Lost Ark was also held in Ratchaburi, as a way for couples to prove their love while another adventure-themed ceremony in Prachin Buri had couples running away from pirates. Yes, pirates. Other than the thrill of having someone chase after you with a sword, it also makes for some really hilarious wedding photos. Finally, there was Eazy FM's "Running Of The Brides" where brides and grooms-to-be — as well as wannabes — participated in a fun run, which raised funds for charity. Though there wasn't an actual ceremony, one of the prizes was a free wedding. 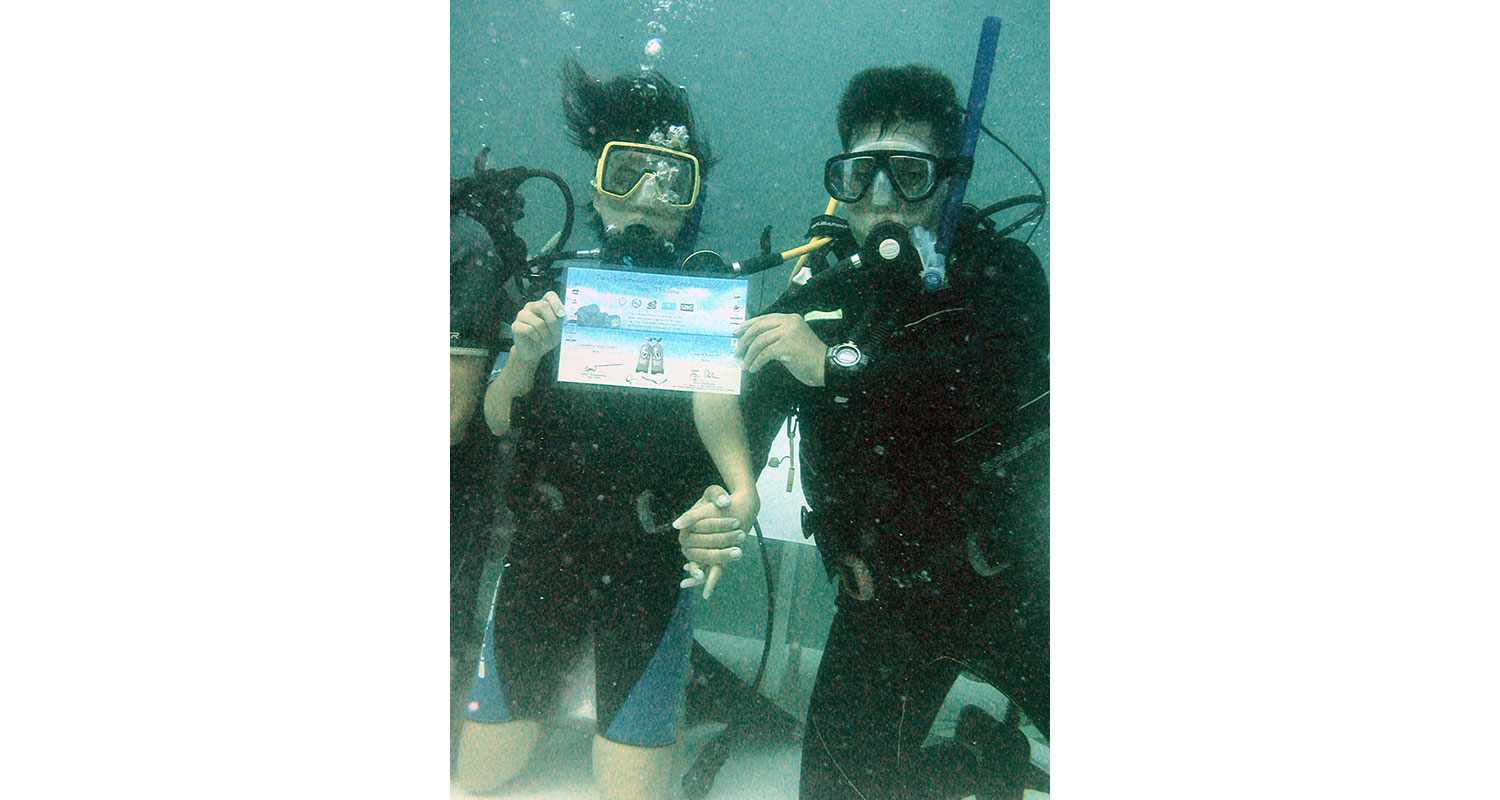