'That it will never come again is what makes life so sweet," Emily Dickinson wrote in a poem more than a century ago. The line has since become well-loved, reminding people to treasure the time they still have.

But how many can attain enlightened bliss and never be swayed by life's miseries and misfortunes?

What Is The Good Life?, the latest book by Ploy Chariyaves, is a meditation on the subject, and more.

The 291-page, exquisitely illustrated collection of essays almost defies definition. It's deeply personal, originating as an attempt by the author to overcome her grief after her father passed away, while also being extremely far-reaching in its intellectual pursuit.

It seeks to connect seemingly isolated issues such as Aristotle's philosophy, Zen-style ink painting, the economics of travelling, Orhan Pamuk's Museum Of Innocence, creative thought processes, and the therapeutic benefit of forest bathing.

What Is The Good Life? represents a stunning break for the artist/author best known as a culture specialist.

Ploy's past works, such as Ploen Kab Ploy, Prada Mandala and Italy Crafted, are characterised by a sharp sense of style, vivacity and optimism. Her style is leisurely, her writing highly stylised, complete with snappy phrases and smart plays on words.

Memos and notes Ploy’s father kept in a cabinet which later became an inspiration for her book. 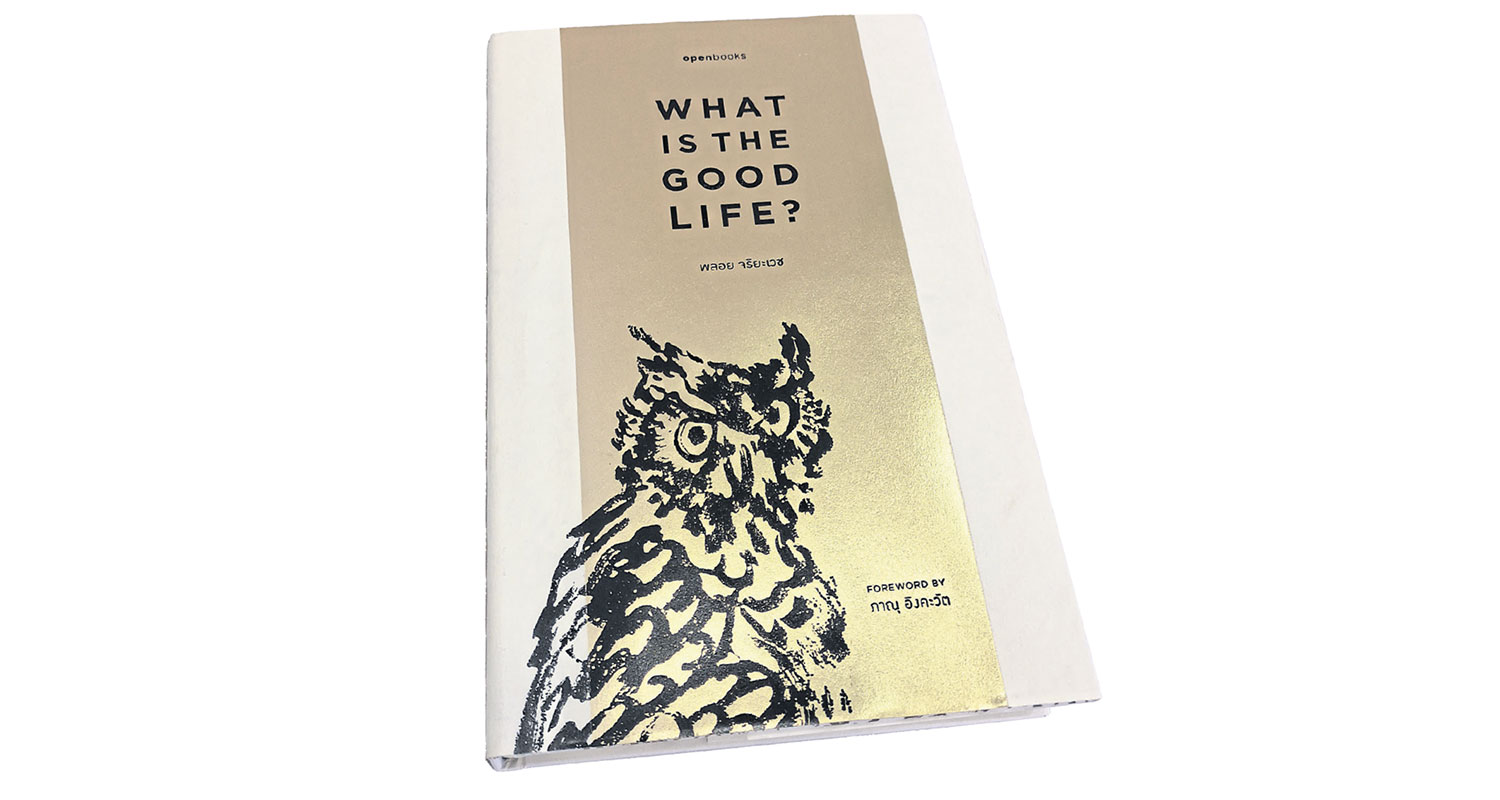 Her latest offering, however, is brooding, venturing into complex ideas and gloomy corners. In What Is The Good Life?, Ploy dives into her subjects deeply and nonchalantly, unfolding and interweaving them with rich references that leave almost no room for linguistic frills.

"I couldn't set myself to do anything last year. I was in great suffering. I missed my father so much," Ploy said in recalling how the book began.

In 2018, her father Chai-anan Samudavanijja, an internationally renowned political scientist, former Constitutional Court judge, president of the Royal Institute and director of Vajiravudh College, among other celebrated titles, passed away.

Ploy is Chai-anan's only daughter and he meant the world to her. The late professor was both father and friend, her mentor, confidant and travelling companion. His death left the usually sunny artist and writer with a kind of grief she had not known before.

Since her mind dwelled so much on her late father, Ploy thought she might as well do something about him. By going back to study his works and thoughts, she believed she would be able to produce a book that would be useful to readers while relieving herself of the anguish.

Ploy said her father had a cabinet where he kept things that were meaningful to him -- old photos, lectures, the nametag for his presentation on a world stage, the contract for his first English-language book, letters from his students, memos, notes and other bits and pieces that were once parts of his life.

As she browsed through the mementos, Ploy came across one sentence her father wrote, apparently as he was entertaining some ideas: "What is the good life?"

"The sentence struck me strongly. I felt this would be the title for my new book," Ploy said.

It took the writer one year to complete the book. It was a year full of tears, and there were several times when Ploy thought of quitting.

Looking back, however, she can say that writing the book has been a healing process, but not one without pain.

"Every time I looked into my father's cabinet and found some new notes, I cried. It felt like I was crying all the time. I cried so much, I have come to distinguish how many types of tears there were."

Going through her father's paraphernalia was a journey of discovery. Each item seemed to convey to her what went through his mind at that time.

Ploy revealed that she experienced a frightening writer's block at first. Her early writings were rejected by the editor, who reasoned that the work lacked spirit. The failure weakened the grieving writer's state of mind even further.

By giving time to the project and reading a lot of books, Ploy gradually picked up the pieces and regained her confidence.

Ploy opened her book with a chapter entitled "Good Morning". Here, she discussed a transformative process -- how it can be painful, ambiguous and uncertain. She took the reader through a "mourn and mend" workshop where participants embroidered a clothing item of the diseased loved one and discussed the deliverance of a Japanese Sumi-e ink painting.

Transformation, a need to keep one's mind "well exercised", the importance of "identity" and the benefit of valuing the "process" more than the outcome are common threads that run through the book's eclectic topics.

Most of all, Ploy emphasised the need for people to know their "true self" and "true pleasure". It would be even better if one can find a sanctuary for one's soul, like a garden near Antwerp for renowned Belgian designer Dries Van Noten or the art of photography for Thai motortaxi driver Pichai Kaewvichit, who recently held his first exhibition.

"There is no [single] answer to what is the good life. Those who have read the book know that it provides none. It is not a how-to title. It's not like you can follow Step One to Step Nine and once you have completed Step 10, then you attain a good life," Ploy said.

She added that she started the book because she wished to cure herself of heartache. In the end, however, she realised that nobody can get rid of life's misery. What's more important is to find some means to cope with it.

"My message through this book is that the process is more important than the final outcome. We live in a world that values the end result -- who wins, what wows, or where we can find the latest stunner. But few care about the how and what it takes."

Ploy insisted that she did not want the book to be too personal, trying to limit her own experience to about 5% of the content. Still, the chapter entitled "Moments/Line/Time", where she interpreted and juxtaposed Pamuk's The Museum Of Innocence with her father's work on social classes and her own attempt to understand all those past moments in his life through his writings and mementos is a moving tribute identifiable to anyone who has loved and lost.

In "Heart & Head", Ploy wrote about a sense of liberation that finally came to her after finishing the first half of the book. It was partly an intellectual breakthrough, an ability to relive what her father stood for and appreciate what it really means at a deeper and broader level. It was also Ploy's own transformation, her breaking out of the "shell" that her father had crafted for her throughout her life to find her own voice.

"Now that father has gone and I have written up to this part, something brimmed up. It has occurred to me that I am writing this book along with father … My thoughts and feelings, and those of my father, have come together under the same thought process," she wrote.

"The rationale and body of knowledge that father left and a myriad of emotions on my part have fused and become the content of this book. I think I started to get a glimpse of the 'essence of life' and have acquired an ability to write about it by myself, with the feeling that father were still nearby providing his guidance."

What Ploy has learned from the year of working on the book is that, in the face of profound loss, one has to find his or her own way out. Self-healing is an individualistic quest.

"In the end, nothing is more important than knowing ourselves," Ploy said.

Ploy indicated in the book that our lives are composed of moments joined together by time. Asked what are the moments with her father that linger on, Ploy said most are about their lying down together and their conversation.

"These memories keep flashing back. They are of my father and I sitting on a train to Prague, of me lying down next to him somewhere and of him laughing. They are all ordinary moments. But they remain on my mind."