More than a gun

published : 18 Feb 2020 at 04:01
newspaper section: Life
writer: Yvonne Bohwongprasert
People lay flowers and write condolence messages in front of Terminal 21 in Nakhon Ratchasima, in memory of those who lost their lives in the shooting. (Photo courtesy of Terminal21Korat)

Sgt Maj Jakrapanth Thomma's killing rampage at the Terminal 21 shopping centre in Nakhon Ratchasima earlier this month snuffed out the lives of 29 innocent people, and injured numerous others.

The incident played out live for the most part on the perpetrator's Facebook page, before it was taken down. It was one of the deadliest mass shootings in Thailand's history. It took an 18-hour standoff with authorities, before the 32-year-old gunman died in a hail of bullets as they closed in on him.

What the public knows so far about the case is that the killing spree began with a real estate dispute. One can deduce from his Facebook posts that he was bitter over being treated unjustly. He lugged weapons stolen from a military base, where he had also shot dead his superior. While at the shopping centre he gunned down people indiscriminately, and kept a group of them as hostages.

The terror Jakrapanth unleashed on the hundreds of mall-goers, while unprecedented, comes on the heels of a similar case last month, that of Prasittichai Khaokaew, a school director who shot innocent bystanders and injured many more during a gold heist in Lop Buri province.

Prasittichai's modus operandi for the gold-shop murders has an uncanny resemblance to the one Jakrapanth used, begging the question: was the Terminal 21 mass murder conducted by a copycat killer?

To get a criminologist's take on this, Life sat down with Nathee Chitsawang, a deputy executive-director at the Thailand Institute of Justice, who has had decades of experience in criminology, penning a number of research papers and books on the subject.

"There is good reason to believe that Jakrapanth is a copycat killer. From what we know, he shares a number of characteristics with Prasittichai," Nathee explained. "To start with, both are passionate shooters who can use highly sophisticated weaponry with immense ease. Both also had places where they could source a steady supply of ammunition.

"Judging from the military attire, high-technology weaponry and the adrenalin thrill with which they gunned down their victims, one can deduce that they are avid computer-game enthusiasts, with a penchant for games where killings boost one's morale. The fact that Jakrapanth had a Facebook post of Prasittichai, brandishing a highly sophisticated weapon and from head to toe in military clothing, shows that there is a possibility he had idolised the man in some form." 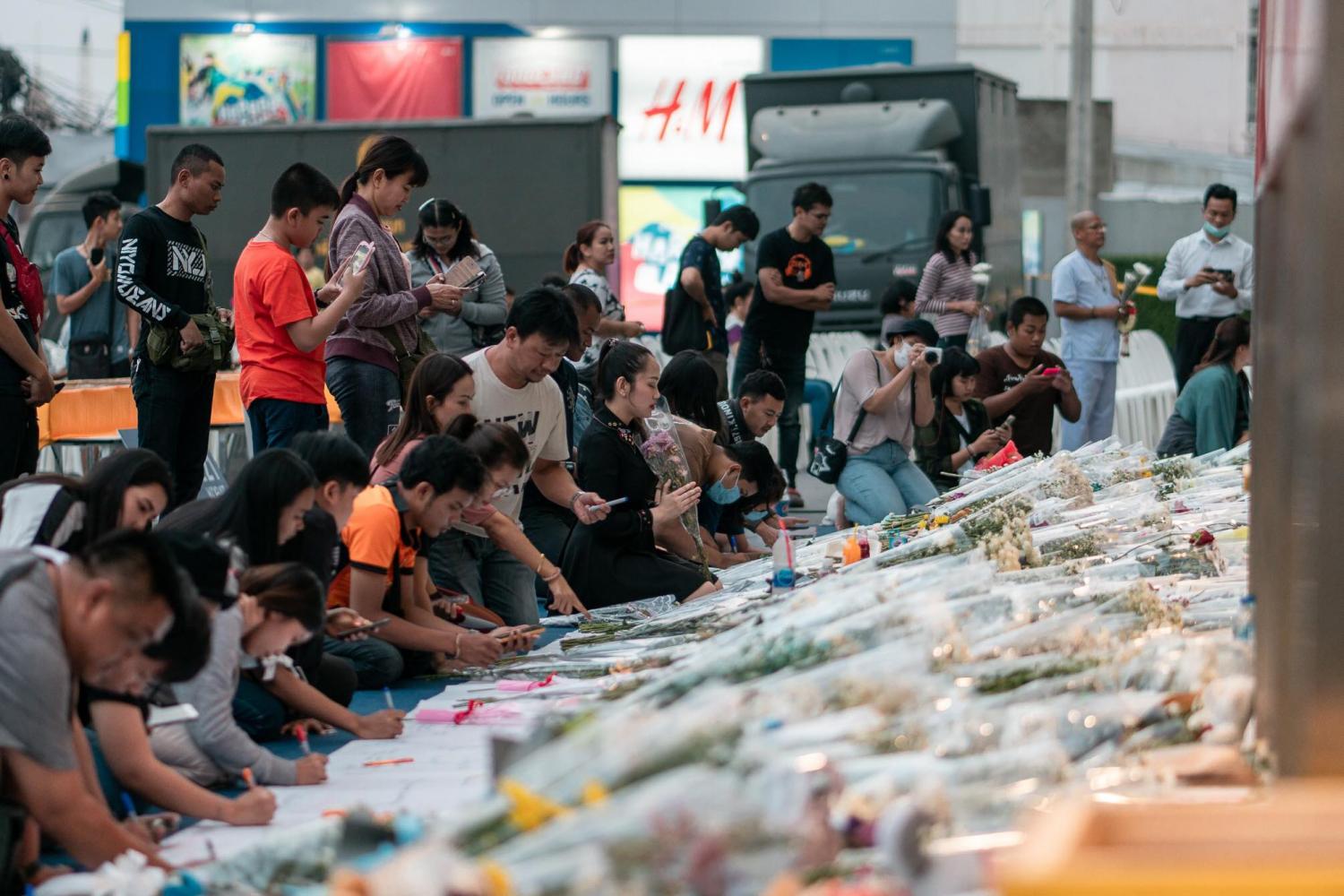 Nathee said Jakrapanth's case is rather unusual in Thailand because his case is that of spree/mass killer.

Psychology Today describes a mass murder as a focused, singular act, happening in one location, even if the perpetrator travels to loosely related spots in the vicinity. There are at least four fatalities and the incident has a defined, short-lived time-frame.

Spree killing, on the other hand, involves a string of a minimum of three murders in several locations, arising from a key precipitating incident that continues to fuel the motivation to kill. Here murders happen fairly close in time, but the time-frame lasts significantly longer than that of a mass murder and the locations are farther apart. Moreover, victims can be targeted or random. The killer's identity might be known, or might remain unknown until caught.

"It is interesting that while it is customary for such killers to commit suicide when they find themselves cornered," he said, "Jakrapanth decided to fight till the end. I believe he felt he had nothing to lose by this. Both ways, he knew he was a dead man."

In Nathee's opinion, Jakrapanth's reasons for going on a killing rampage could have stemmed from a string of personal reasons.

"We live in a repressed society," remarked Nathee. "I believe he was dealing with a lot of pent-up anger and resentment which could have come through some form of injustice towards him, coupled by lack of self-worth and other underlying issues that could very likely have created raw emotions in him which reached a feverish peek that lead him to do the unspeakable.

"However, while many who face this predicament have other forms of release that don't involve killing people, for Jakrapanth it was sadly different. The easy access he had to top weaponry played a pivotal role in his killing spree. Already an expert shooter, he knew where to source weaponry to unleash the maximum terror before he could be subdued. It was a ticking time-bomb waiting to explode."

Nathee said Thailand has an acute problem with gun control which needs to speedily be addressed to open opportunities for people to use dialogue instead of weapons to address conflicts.

"It is about time law makers discuss gun control, because, for one, their ease of accessibility makes people misuse them. Gun owners claim they need to own a weapon to protect themselves, but research has proven otherwise; it is often used to address conflicts which sadly end in death," said the criminologist, whose expertise also includes penology.

"Up to 60% of violent crimes in Thai society are attributed to guns."

Nathee believes the gun-control laws are already good enough, but what urgently needs to be discussed is their enforcement, which he describes as lax because of the personal stake people have in them.

"We need to strictly abide by gun laws and enforce them to the maximum to have any chance of controlling gun-related crimes in the country. What I see as unfortunate is that Thai society continues to sweep this problem under the carpet, despite the fact that numerous crimes take place due to the easy access to guns." 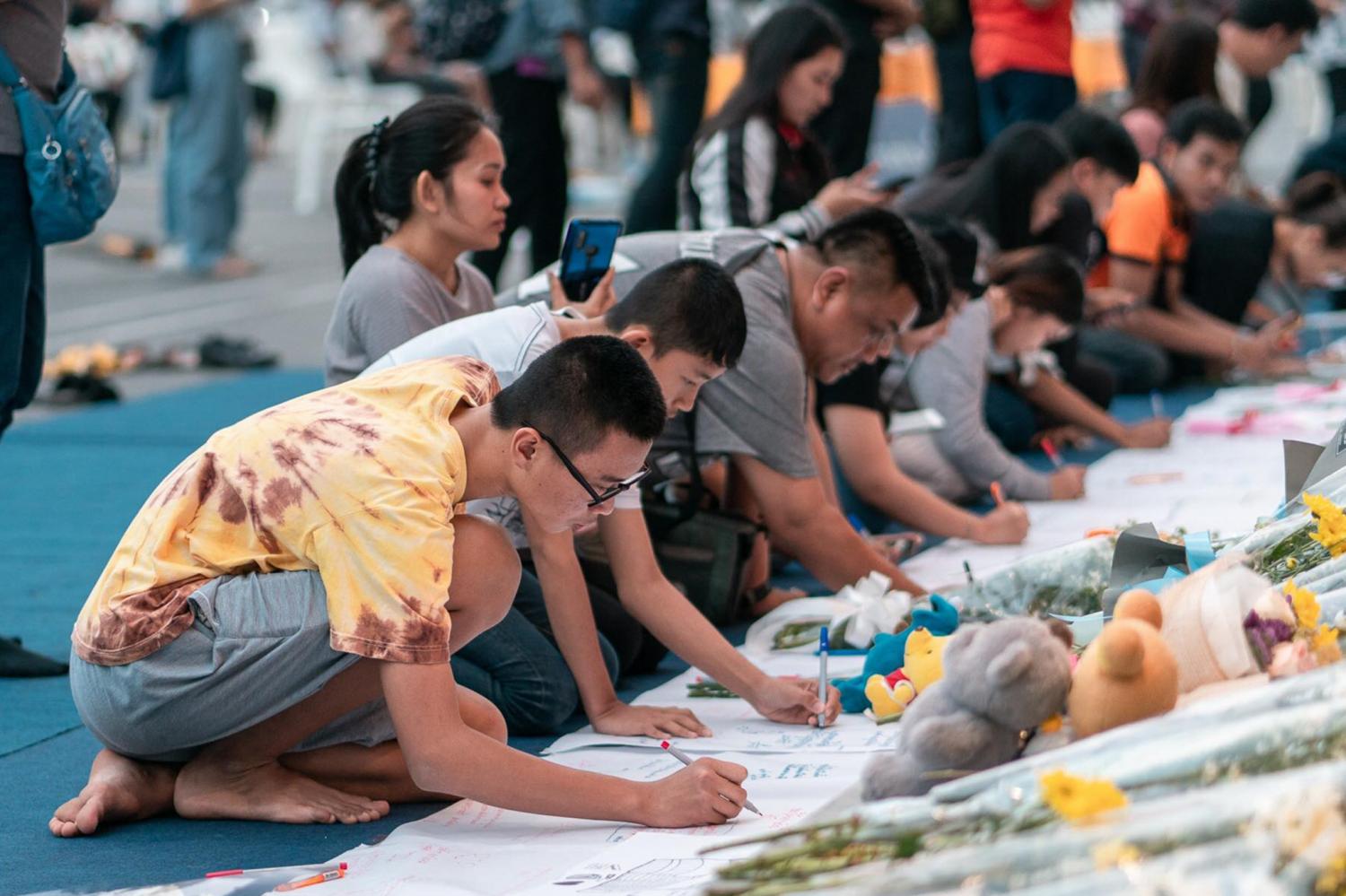 People lay flowers and write condolence messages in front of Terminal 21 in Nakhon Ratchasima, in memory of those who lost their lives in the shooting. Photo courtesy of Terminal21Korat Home

His views on media coverage of not just high-profile crimes such as that of Jakrapanth but also crime where any form of violence is used is also clear: "Ditch the sensationalism and be more sensitive towards the impact viewers get from what you report."

"Adding graphics to show just how a rapist overpowered his victim in the evening news gives no news value for the viewer," noted Nathee. "News coverage of a crime need not be filled with facts if they haven't been released by law enforcement. In the meantime, why not focus on other issues pertaining to the case, which can educate people and make them aware of the perils of breaking the law?

"Don't forget that there are a certain number of viewers who are emotionally vulnerable to the graphics that accompany a report. While I understand the fierce competition news stations have today, I hope there will be more control over what is allowed to be shown on TV."