A lesser-known side of Chinatown
Life
Social & Lifestyle

A lesser-known side of Chinatown

Song Wat road is merely 1.2-km long, but it still might take you a few hours to walk from one end to the other, especially if you are a history lover or a shutterbug. 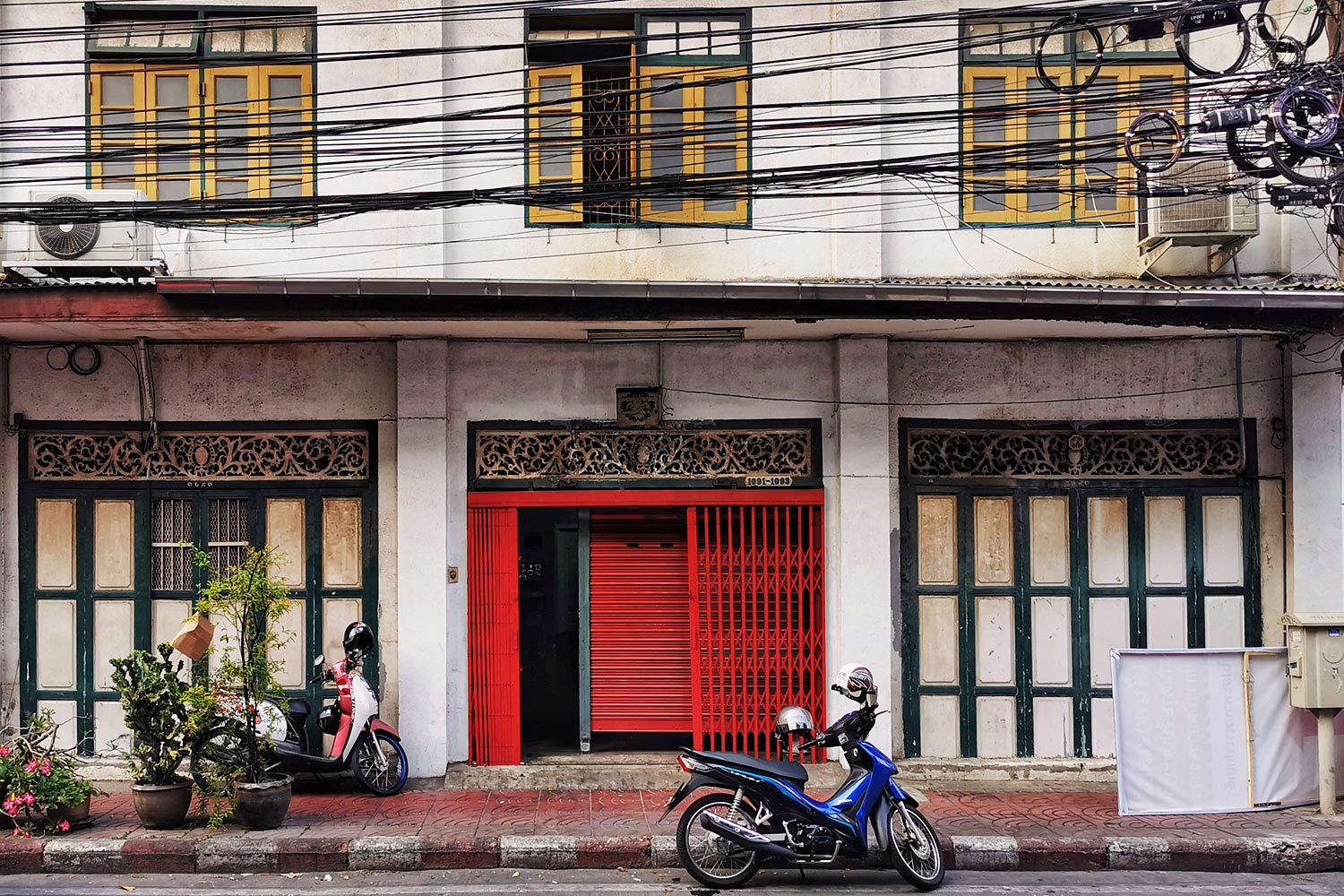 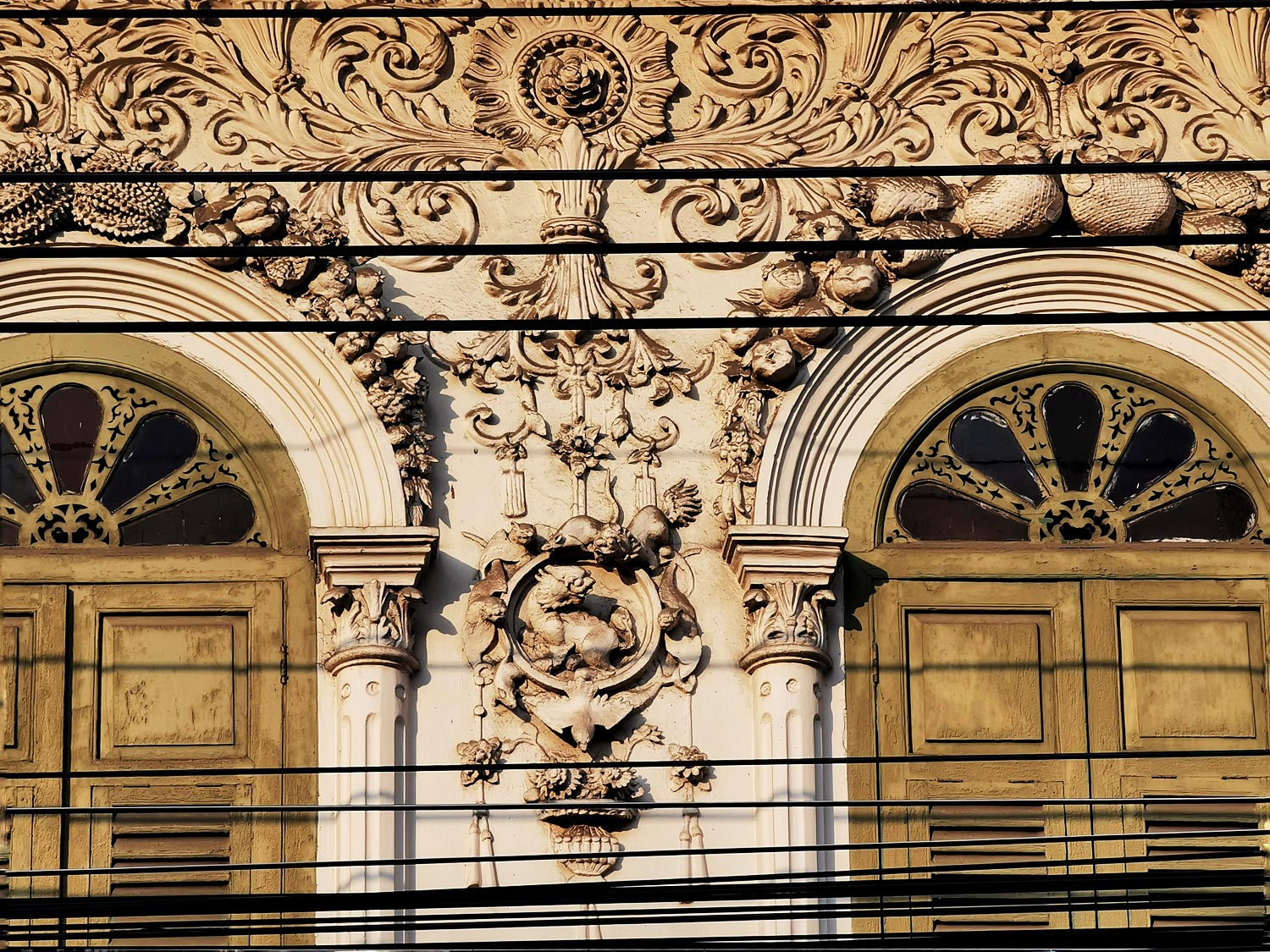 Century-old buildings, which line both sides of Song Wat road, are beautiful reminders of the glory days of this former hub of international trade. Unlike other parts of Bangkok where most old commercial structures that sport a blend of Chinese and Western architectural styles were built to serve as shop houses, the buildings on Song Wat road — which come in a variety of designs — were also meant to be used as offices and warehouses. 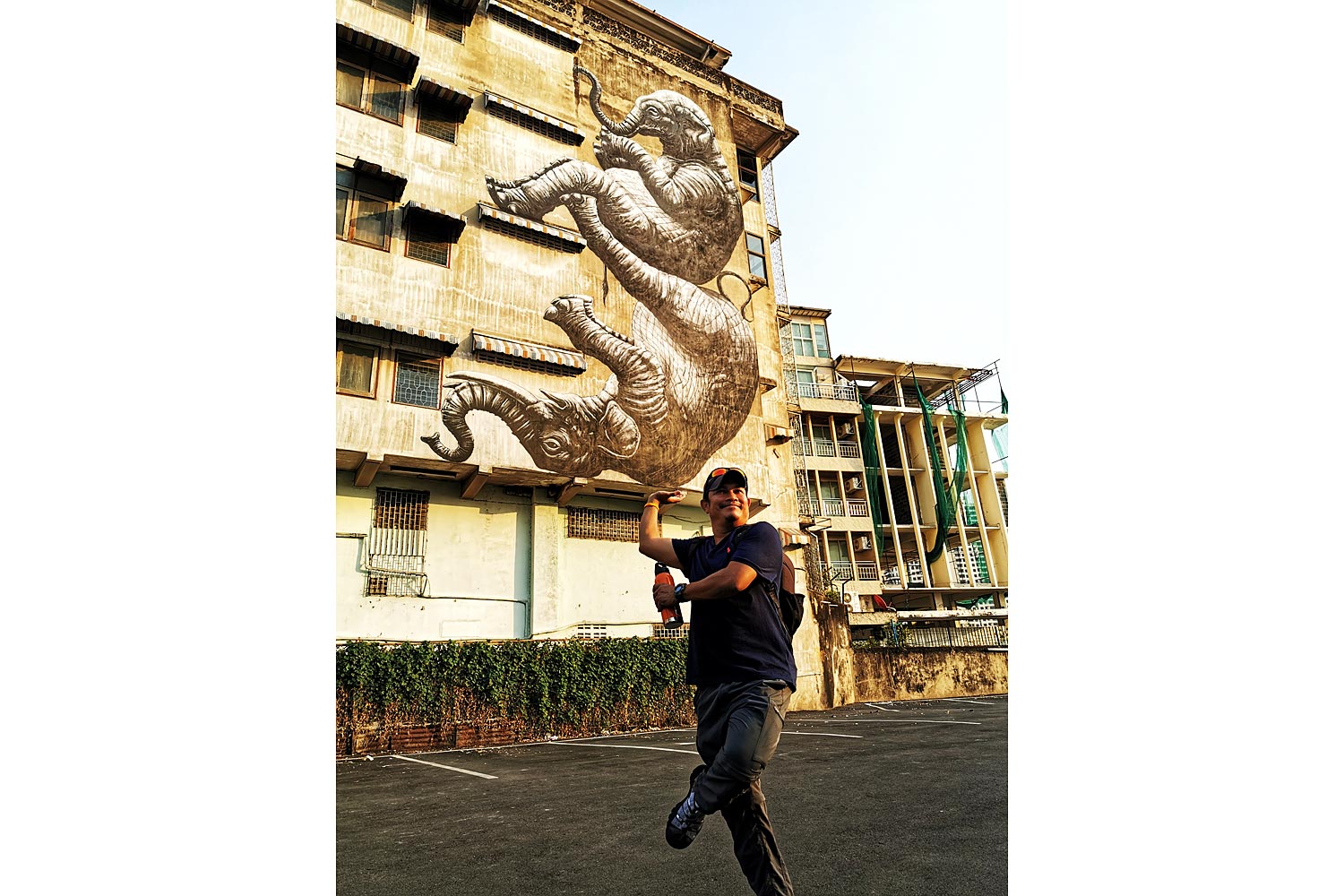 At least three huge pieces of street art were created on the east end of Song Wat road during the Bukruk Urban Art Festival in early 2016. This one by Belgian muralist ROA depicting two elephants doing an acrobatic act seems to have done better than the others in withstanding the elements. If you wish to have a picture taken with this impressive work of art, it’s wise not to wait until it fades away.

Over a century ago, before the advent of trucks and air transport, this riverside part of Chinatown was a bustling centre for the import and export of agricultural products. The road, which is close to the Chao Phraya River, was crowded with steamboats from different parts of the world. Several companies that began on Song Wat road have evolved into business giants such as Charoen Pokphand Group (CP), Bangkok Bank, Saha Pathanapibul PCL, to name but a few.

Song Wat road was an initiative of King Rama V. While considering a proposal to build five roads to reorganise the crowded and fire-prone communities in Sampheng (Chinatown) ravaged by a big fire in 1906, the king suggested that another road should be added to the area adjacent to the river. He then drew a line on the map to show its intended course. Hence, Song Wat — which means “drawn by the king” — was included in the project.

The plan’s original five roads were Yaowarat, Ratchawong, Chakkrawat, Anuwong and Burapha. Song Wat and Yaowarat run virtually parallel to each other, however, the latter is longer partly because it is curvy.

Song Wat stretches from Ratchawong to the west to Charoen Krung (built decades earlier during the reign of King Rama IV) to the east. You can start exploring the road from either end but I recommend you begin from the west near Ratchawong Pier. Before Don Mueang Airport began operation in 1914, almost four years after the death of King Rama V, Ratchawong Pier also served as a gateway for international travel. People making journeys to Europe or elsewhere first needed to take a boat to Singapore or Penang and board a larger vessel from there.

Now let’s get back to Song Wat. Greeting everybody entering from the west end is a charming three-storey building with elaborate woodwork. Continuing along the road, you will find several more heritage architecture dating back to the early years of the road itself. One of my favourites is a building nicknamed “Fruit Building” which is adorned with stuccowork in the shapes of various fruits from durian and mangosteen to pineapple and star fruit, not to mention the usual floral patterns.

Apart from commercial buildings, many of which are still doing brisk business, Song Wat is also home to places of worship of various faiths, from Chinese shrines to Thai Buddhist temples and a mosque. Some of them are even older than Bangkok.

The other day it took me the whole afternoon to finish my stroll through Song Wat, just like every visit before that. 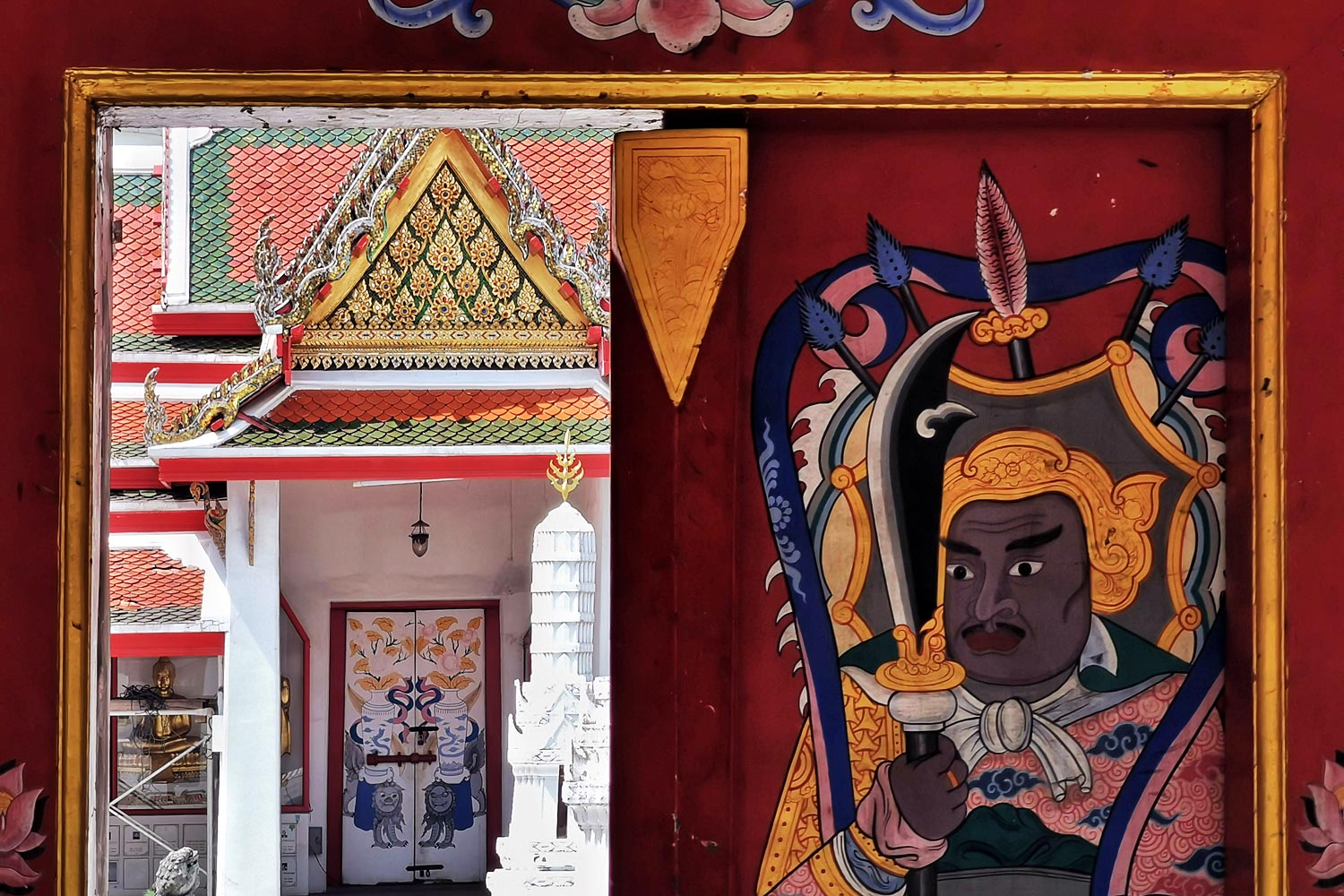 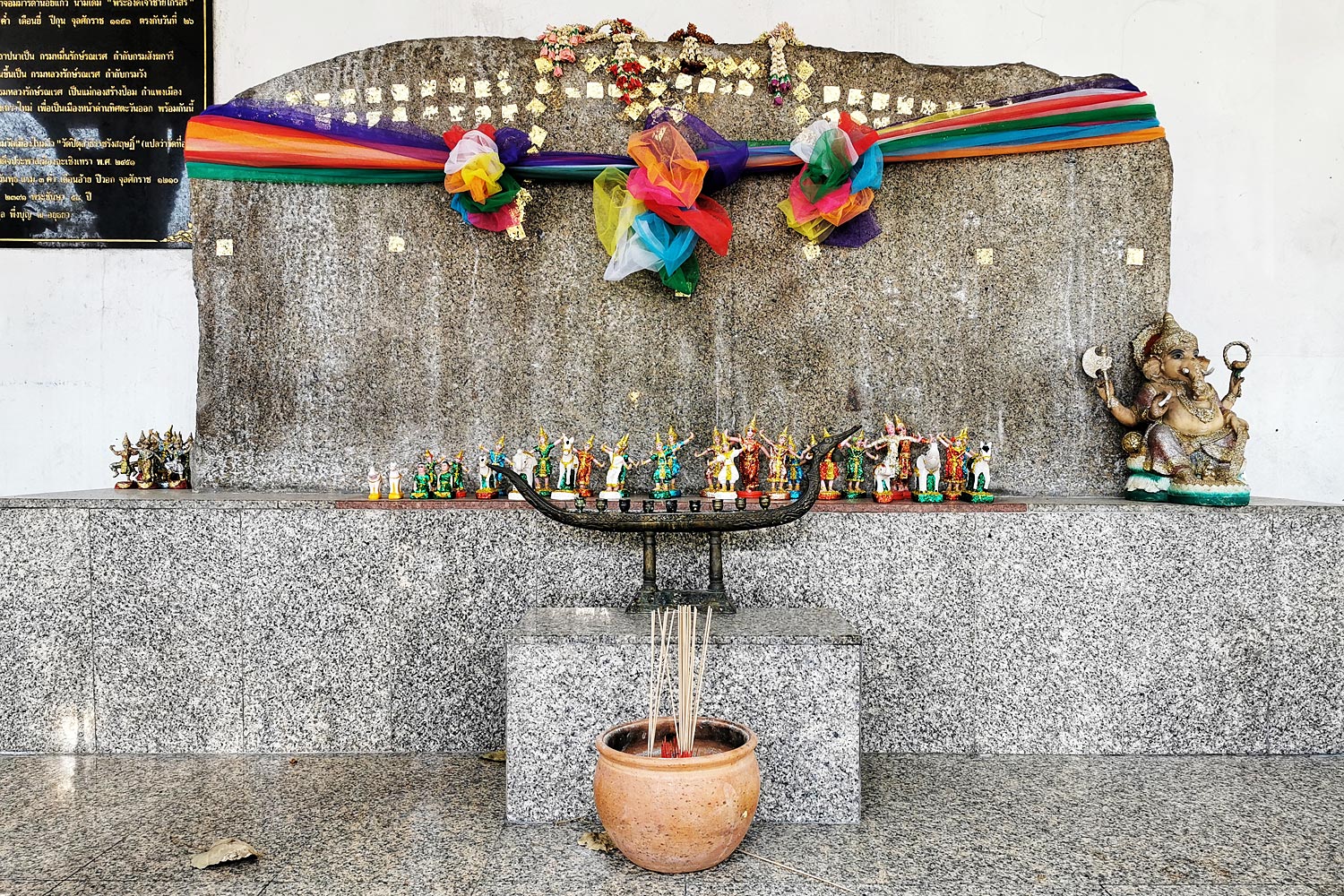 Wat Sampheng lent its name to the area now known as Chinatown. The temple, which was built during the Ayutthaya Period, was renovated and renamed Wat Pathum Khongkha not long after Bangkok became the capital. Another major renovation took place during the reign of King Rama II, which explains the presence of Chinese artistic influence. During the early reigns, the temple also served as the venue for executions of royalties convicted of grave crimes. The executions were to be carried out without a blood spilling onto the ground and to do this, each of the ill-fated princes were put in a red cloth bag and then hit with a sandalwood club. A precise strike at either the sternum or the neck was usually enough to finish the task. The thick slab of stone on which these punishments took place is still kept in the temple ground. 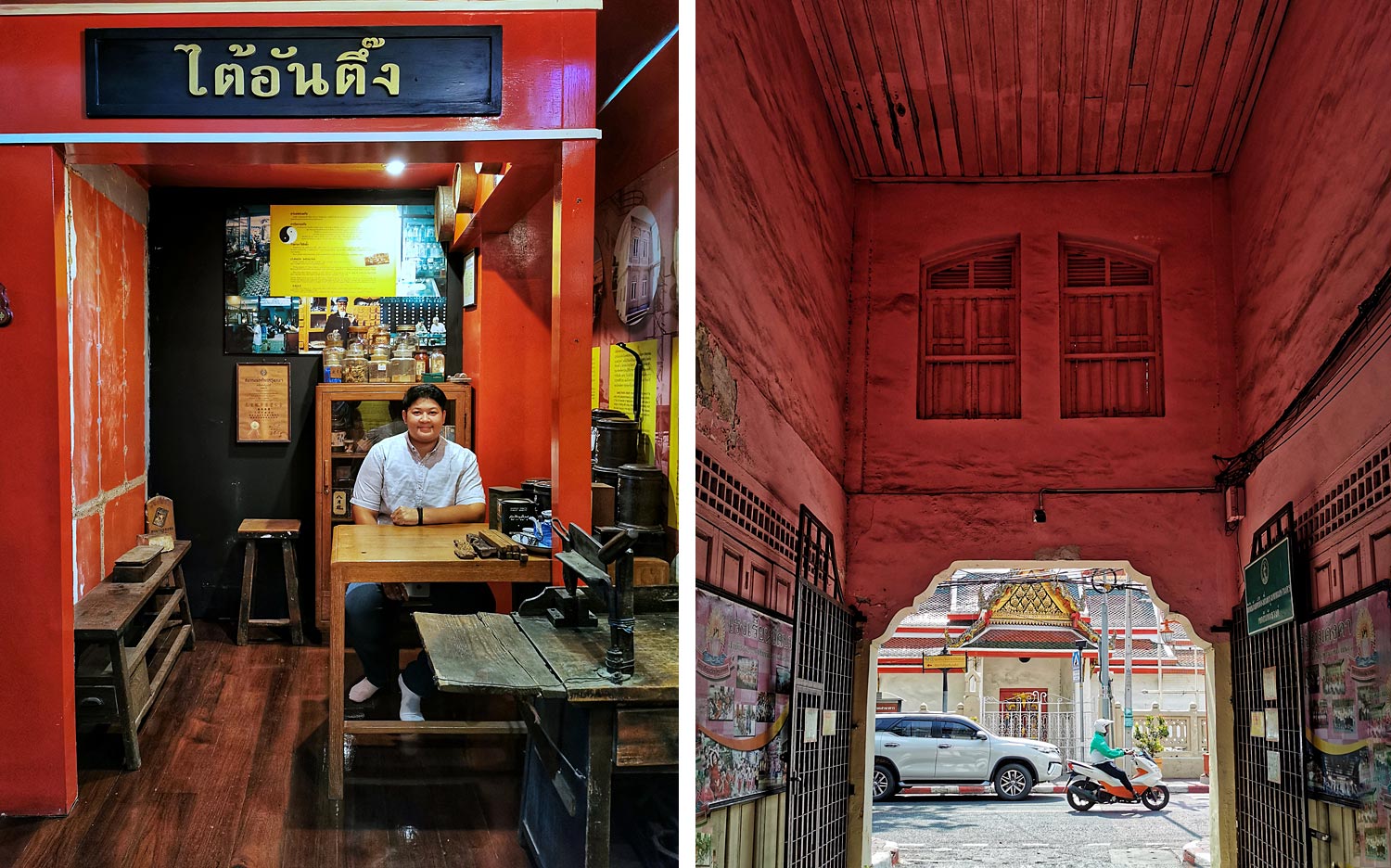 Opposite to Wat Pathum Khongkha is its namesake school. Don’t confuse Wat Pathum Khongkha School with the better known Pathum Khongkha School. The former is for primary students while the latter for high-schoolers. The high school used to be situated at this very location before it moved to Sukhumvit road in 1964. The primary school is worth dropping by if you are visiting Song Wat road since it has two elegant old buildings, one of which houses a local museum where you can learn about the history of Bangkok’s Chinatown. The entrance is free. 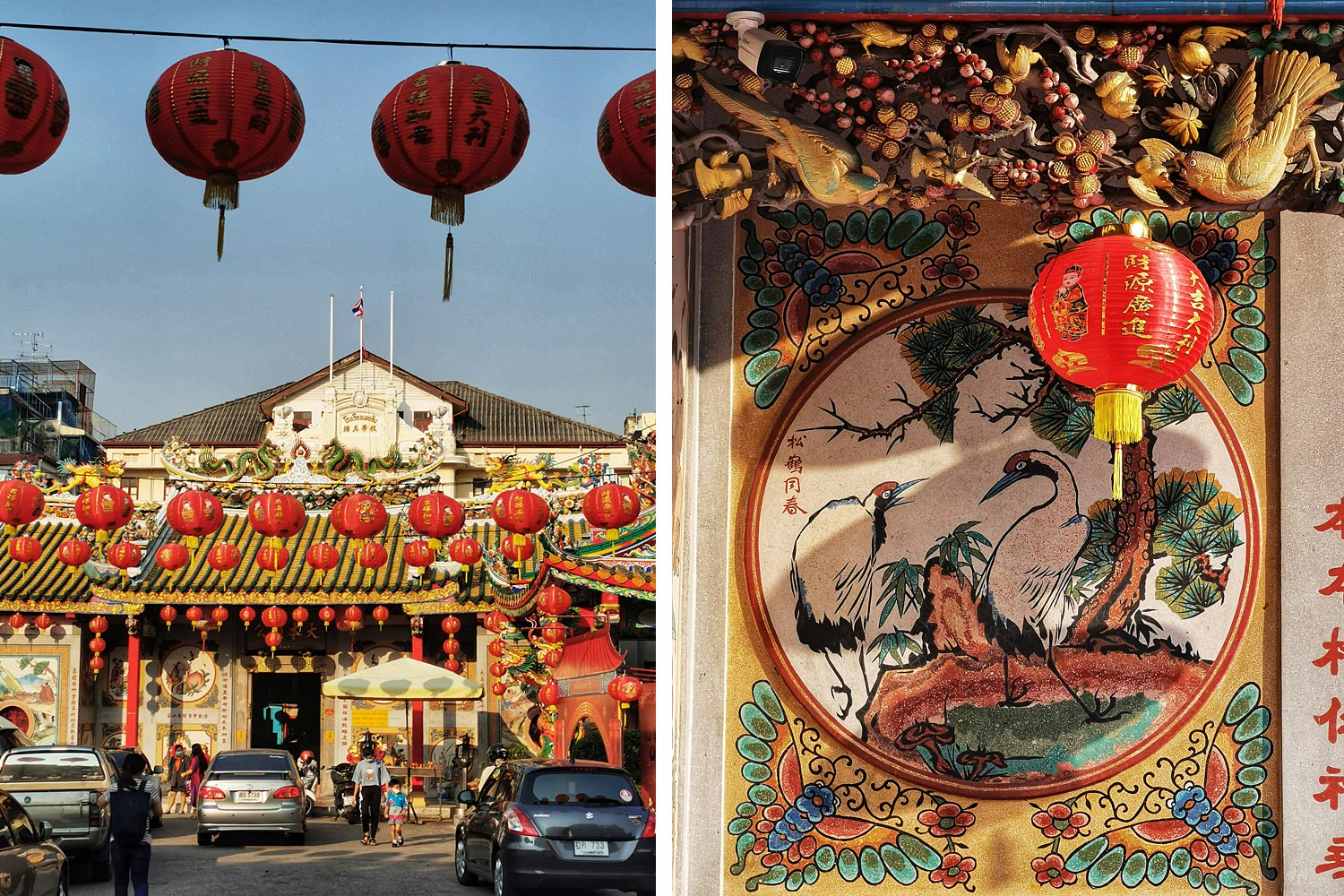 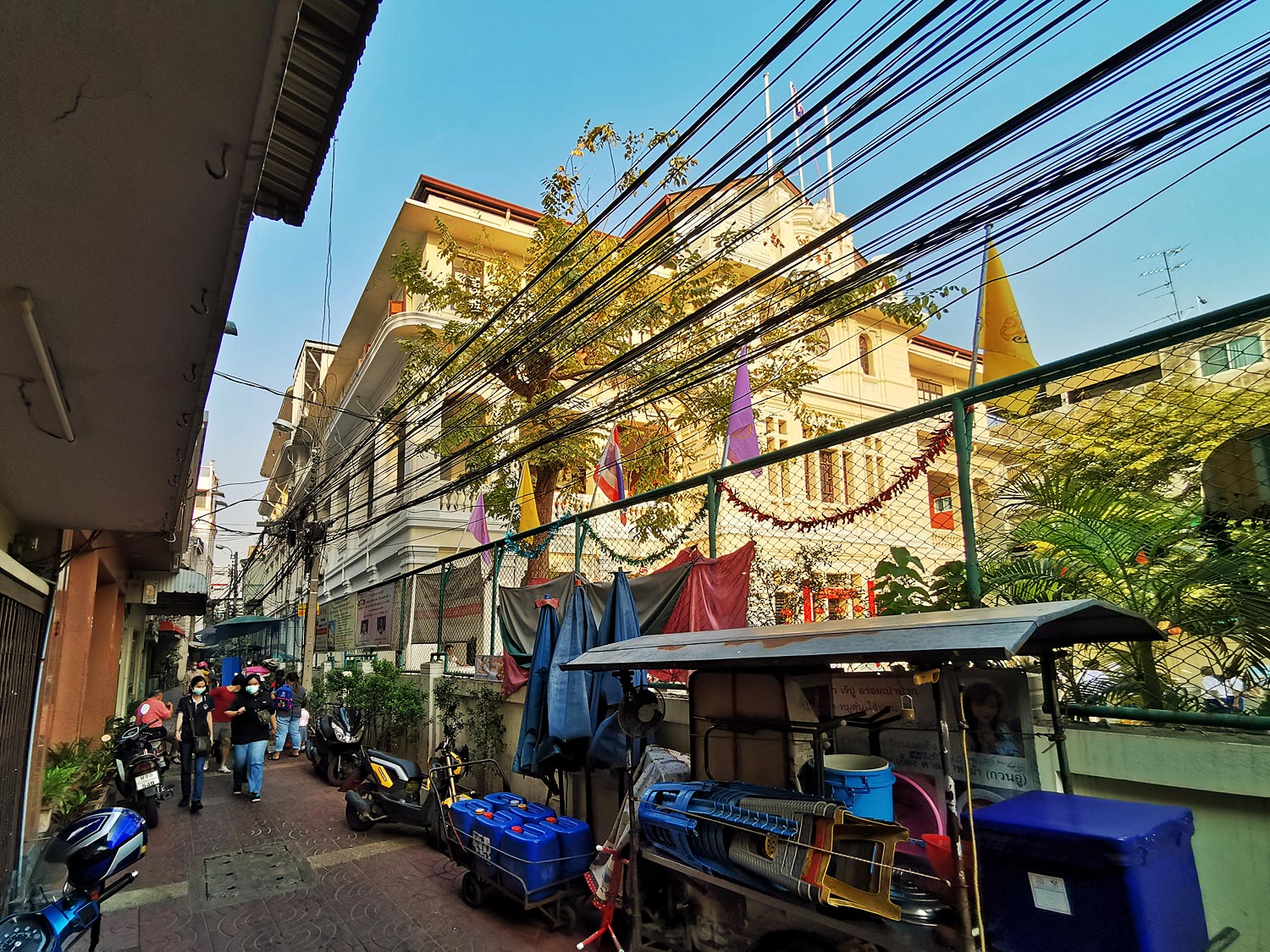 Reaching its 100th anniversary this May, Peiing School is known for excellence in teaching Chinese. Several of Thailand’s top businessmen, such as Charoen Sirivadhanabhakdi of Thai Beverage PLC and Paibul Damrongchaitham of GMM Grammy, went to this primary school. Nestled behind the highly revered Lao Pun Thao Kong Shrine, Peiing also boasts a beautiful building. However, unlike the shrine, the school is not open to the public for obvious safety reasons but you can appreciate its elegant architecture from the outside, from either of the alleys flanking it. 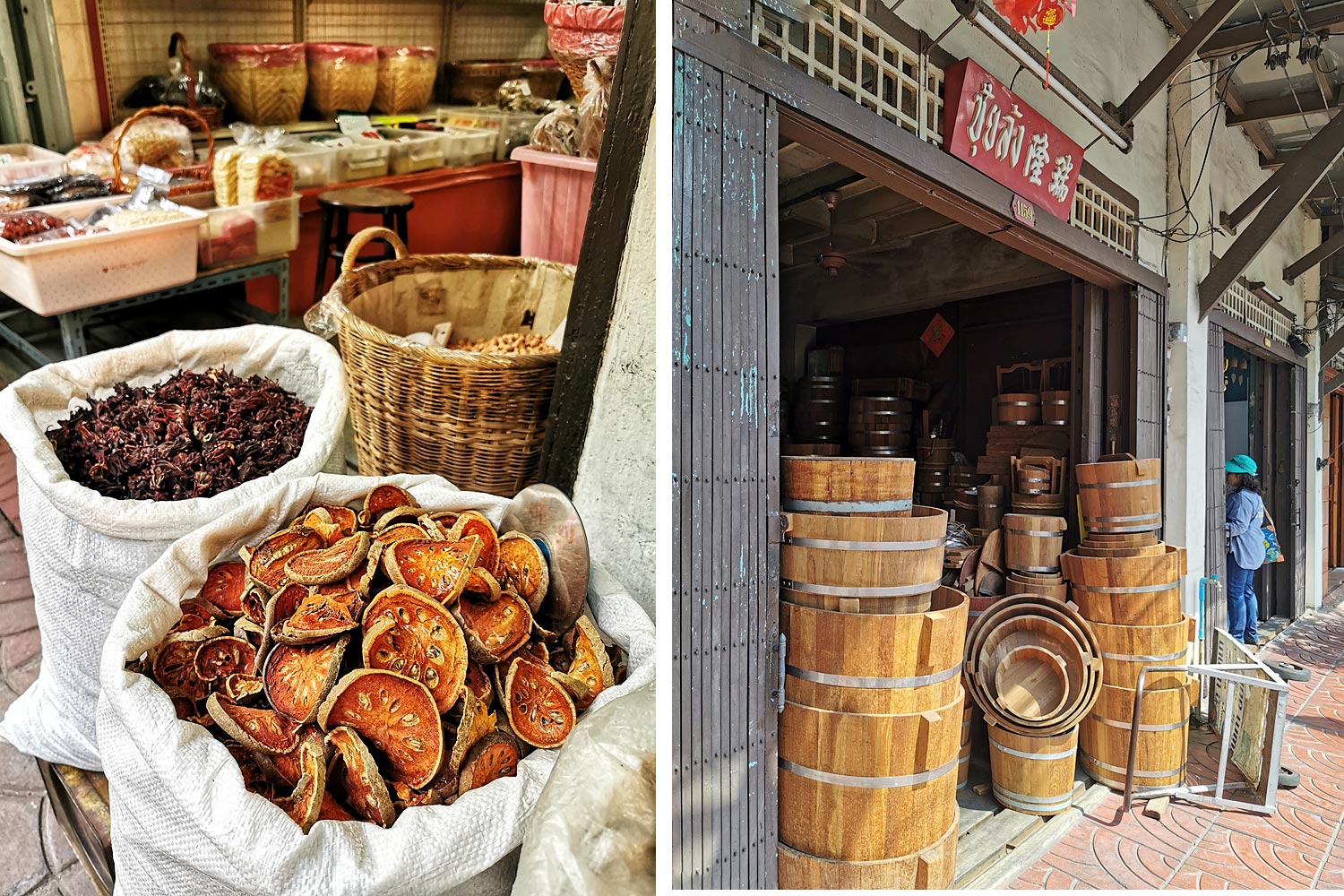 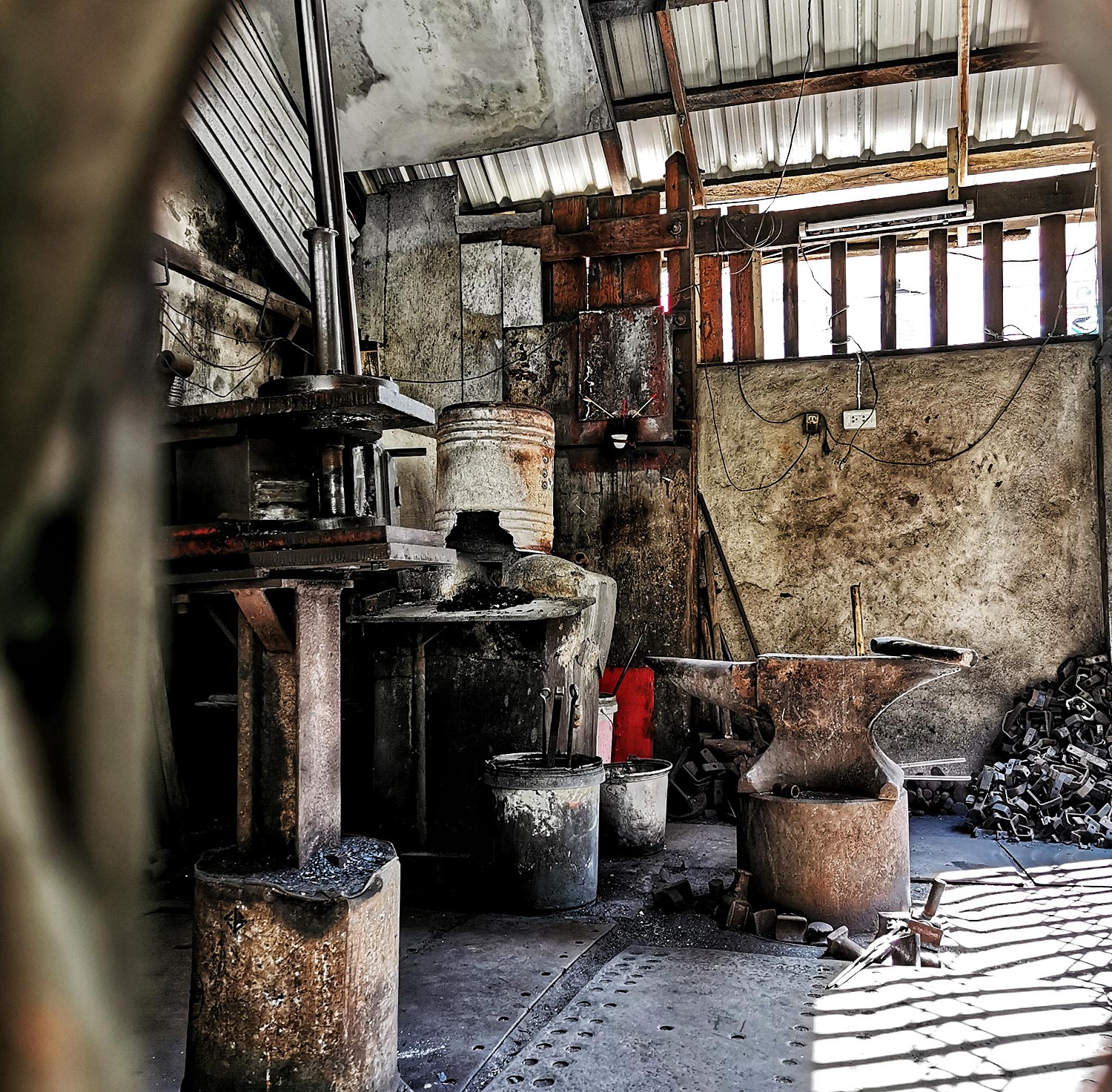 Along Song Wat road and in the alleys branching out from it, you will find not just companies but also shops specialising in different goods, from agricultural products like dried fruits and beans to handcrafted items such as wooden hot tubs and leaf springs for trucks. 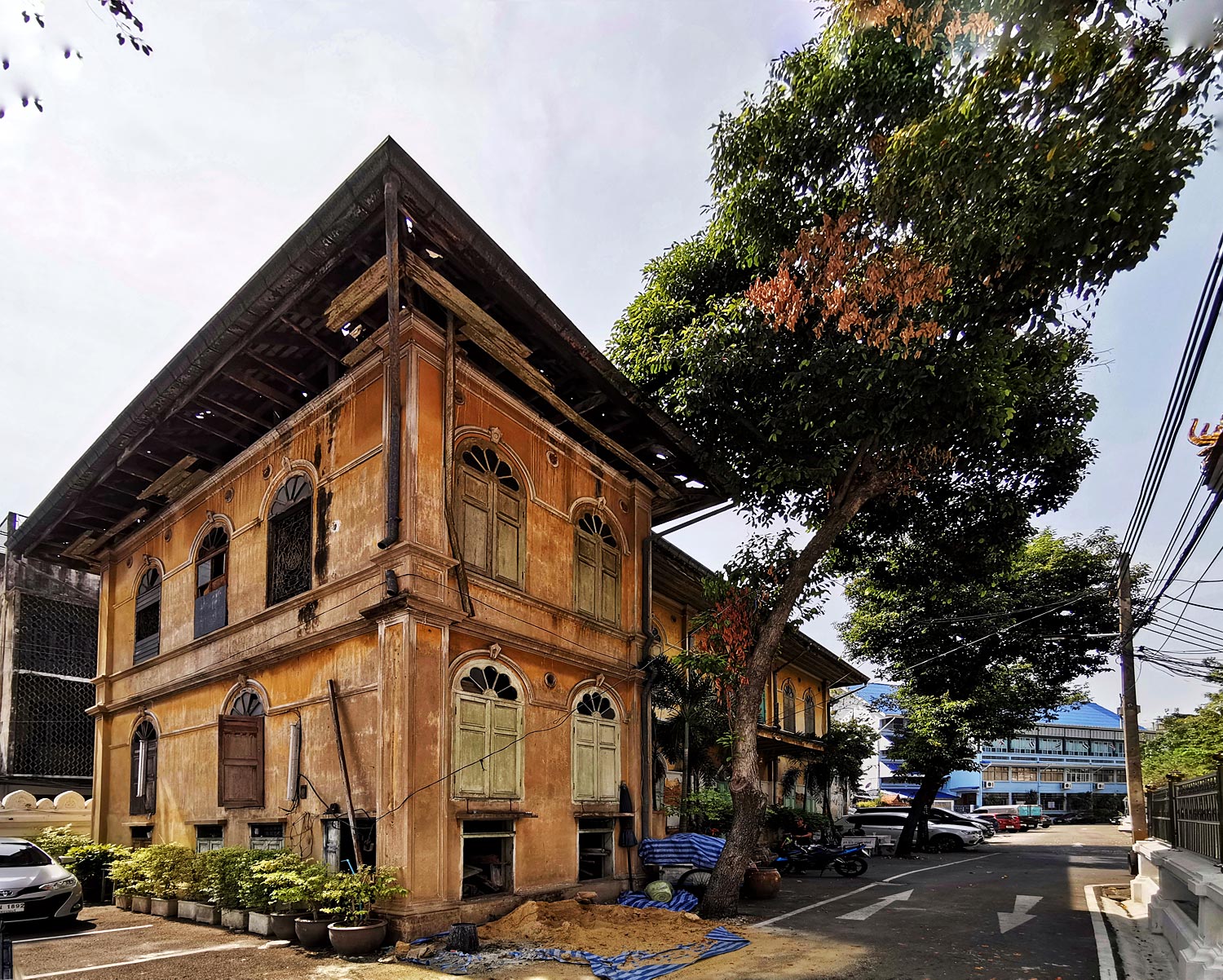 Wat Samphanthawong is a short walk from Wat Pathum Khongkha. Like the latter, Wat Samphanthawong is believed to date back to the Ayutthaya period. Although the temple’s Buddha images and other statues are still intact, it’s a pity most of the original religious structures have been replaced by modern ones. However, there is still a crumbling, yet interesting piece of architecture from 1926. It’s a building donated by a member of the Thianprasit family for use as a dhamma school for monks. The same family name is also depicted on one of the wellpreserved vintage buildings at the nearby Wat Pathum Khongkha School. 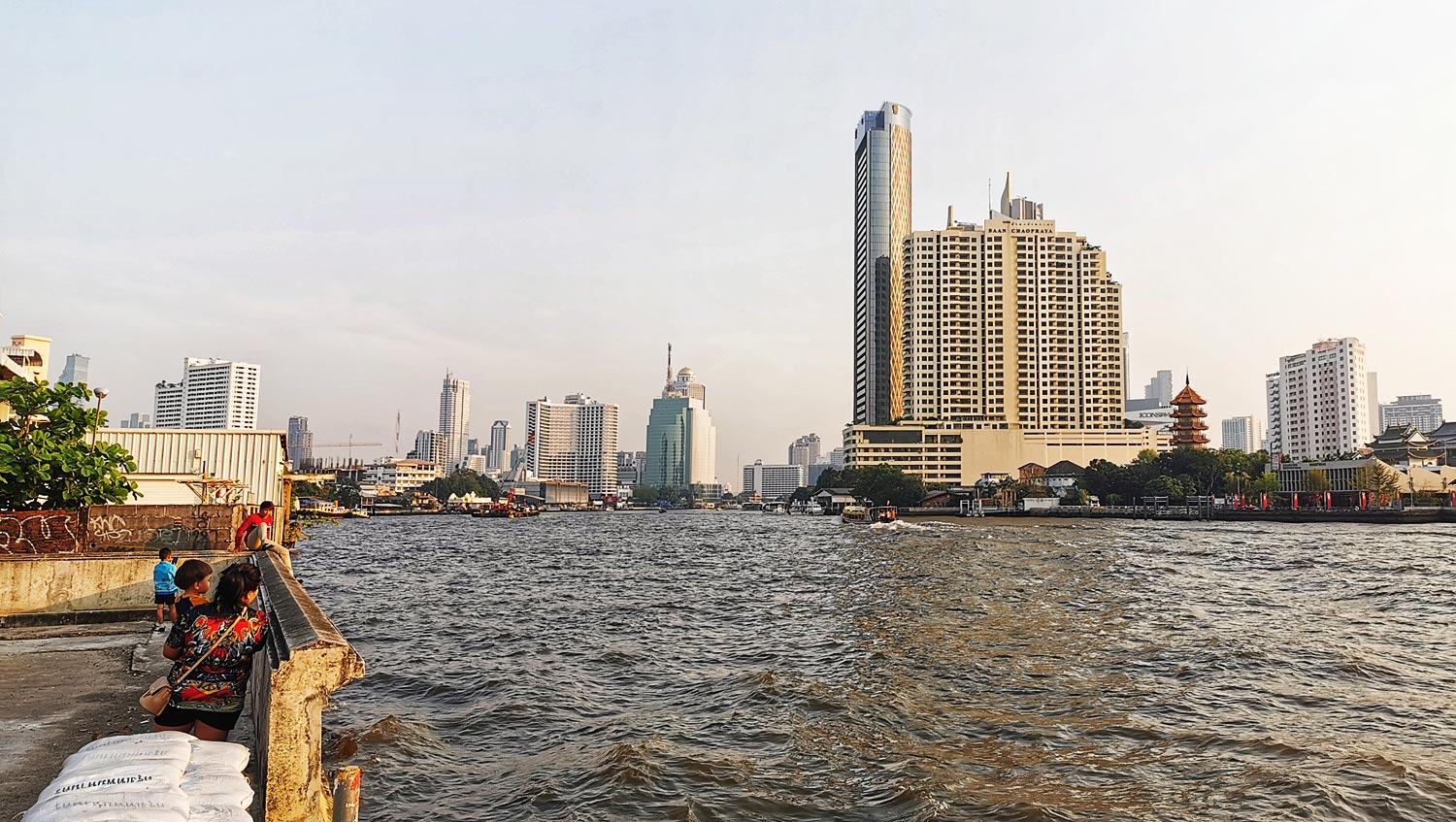 Song Wat is close to the Chao Phraya River but there are just a few spots from where the public can access the waterside. The location shown in this photo is in a parking lot not far from Wat Pathum Khongkha. Another place you can do so for free is Ratchawong Pier at the west end of Song Wat. But if you wish to chill out and enjoy the river view in a more comfortable fashion, look in Google Maps. There are a bar, a cafe and a restaurant hidden at different spots along the river. 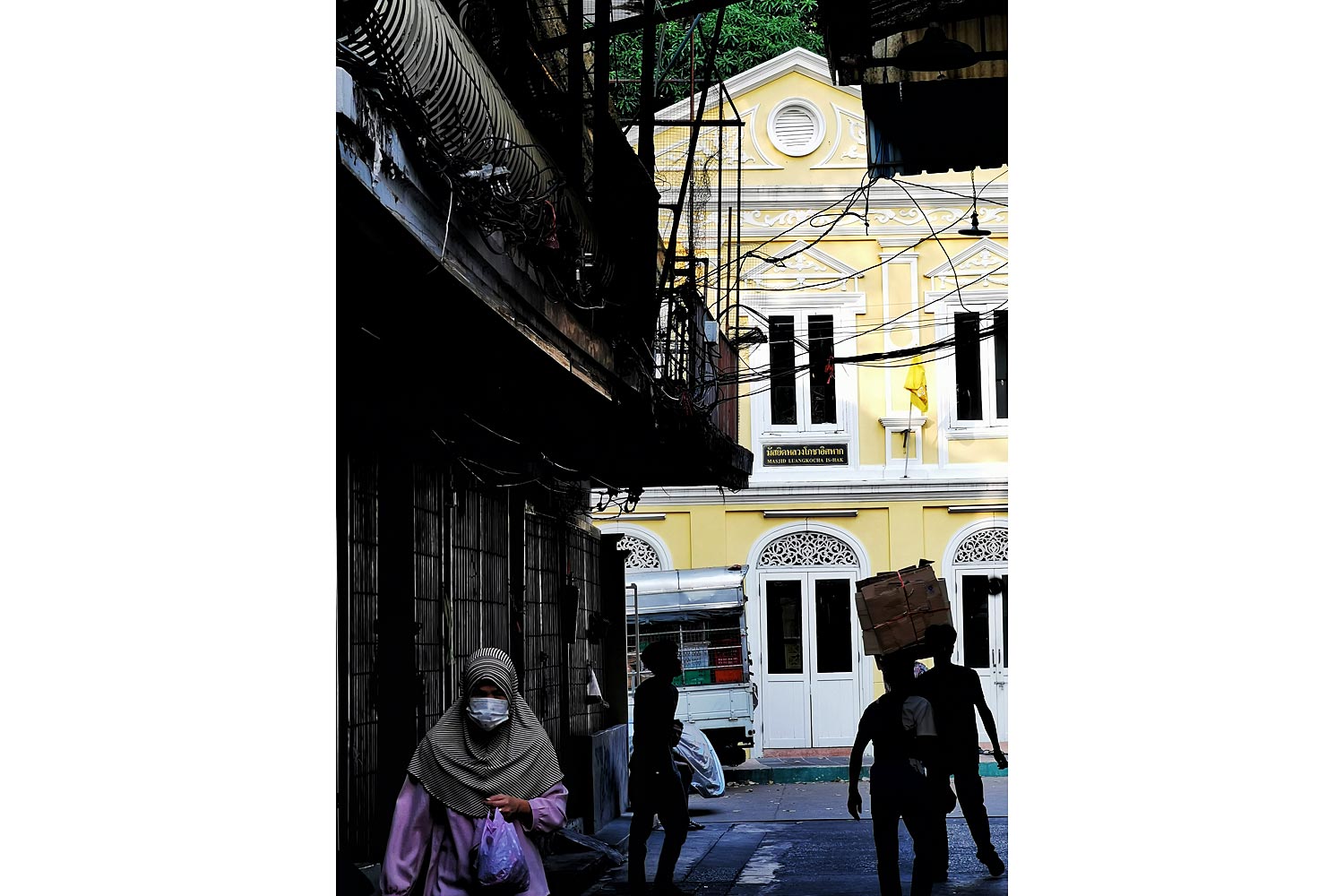 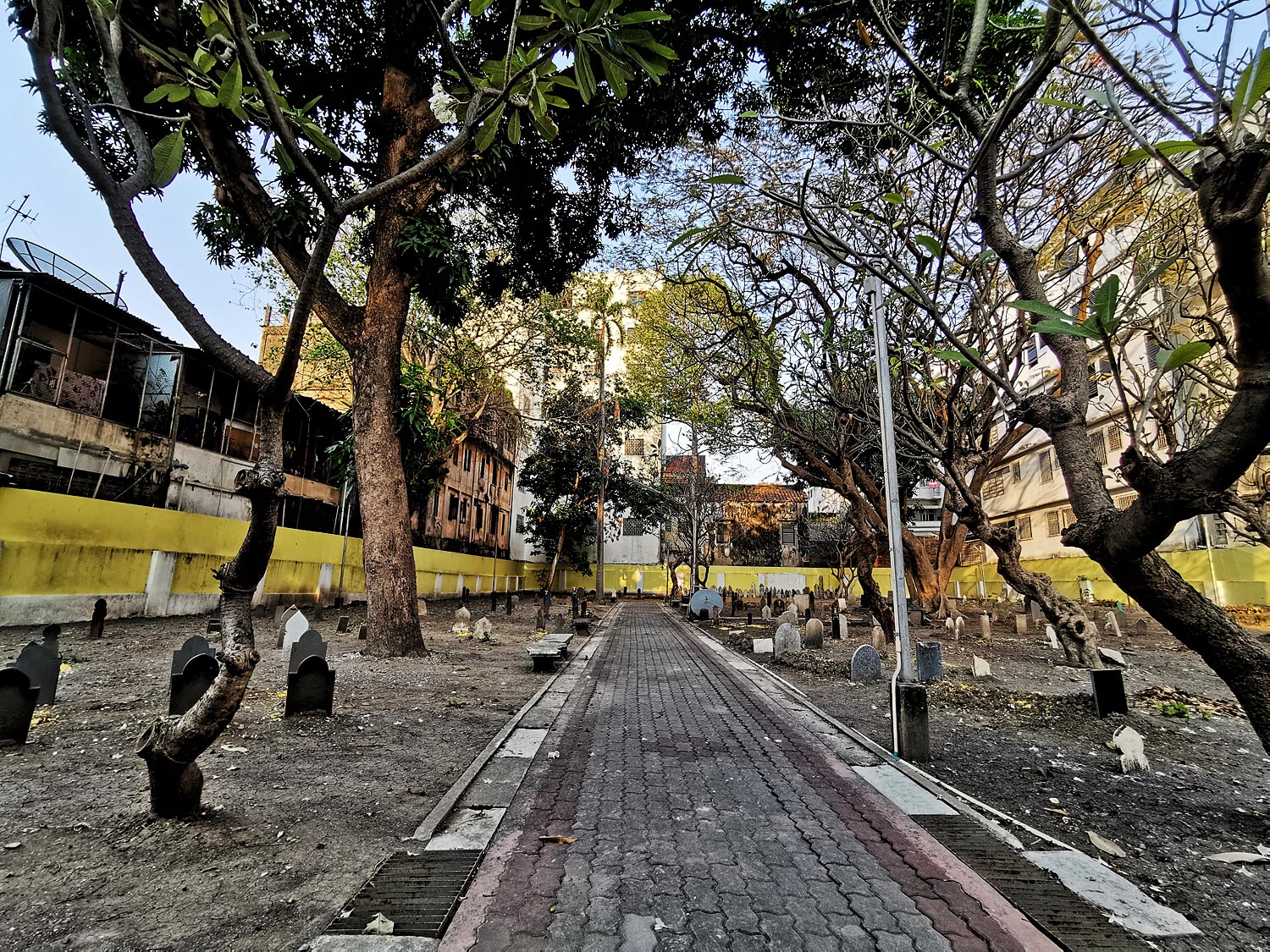 How many people would have thought there’s an Islamic place of worship in Chinatown? To accommodate the religious need of Muslim traders, Luang Kocha Itsahak Mosque was built during the reign of King Rama V by a government official after whom the mosque was named. Unlike elsewhere, this particular mosque is housed in Western-style architecture. Behind the yellow-coloured mosque is a tranquil Muslim cemetery which is a completely different world from the busy atmosphere of the Chinatown surrounding it.

- Parking space can be found at Wat Pathum Khongkha or at a riverside parking lot a few minute’s drive further west. However, the most trouble-free way to get to Song Wat road is by public transportation.

- The MRT Hua Lamphong is not far from Song Wat’s east end. And the Wat Mangkon station is a short stroll from the west end. Alternatively, you can take a bus to any stop on Yaowarat Road and walk from there.

- Another option is to take the Chao Phraya Express Boat and get off at Ratchawong Pier which is literally a stone’s throw from Song Wat’s west end.

- In case you’re interested. Old maps of Chinatown before Song Wat and Yaowarat roads were built can be viewed at bit.ly/2wHI0Vi. 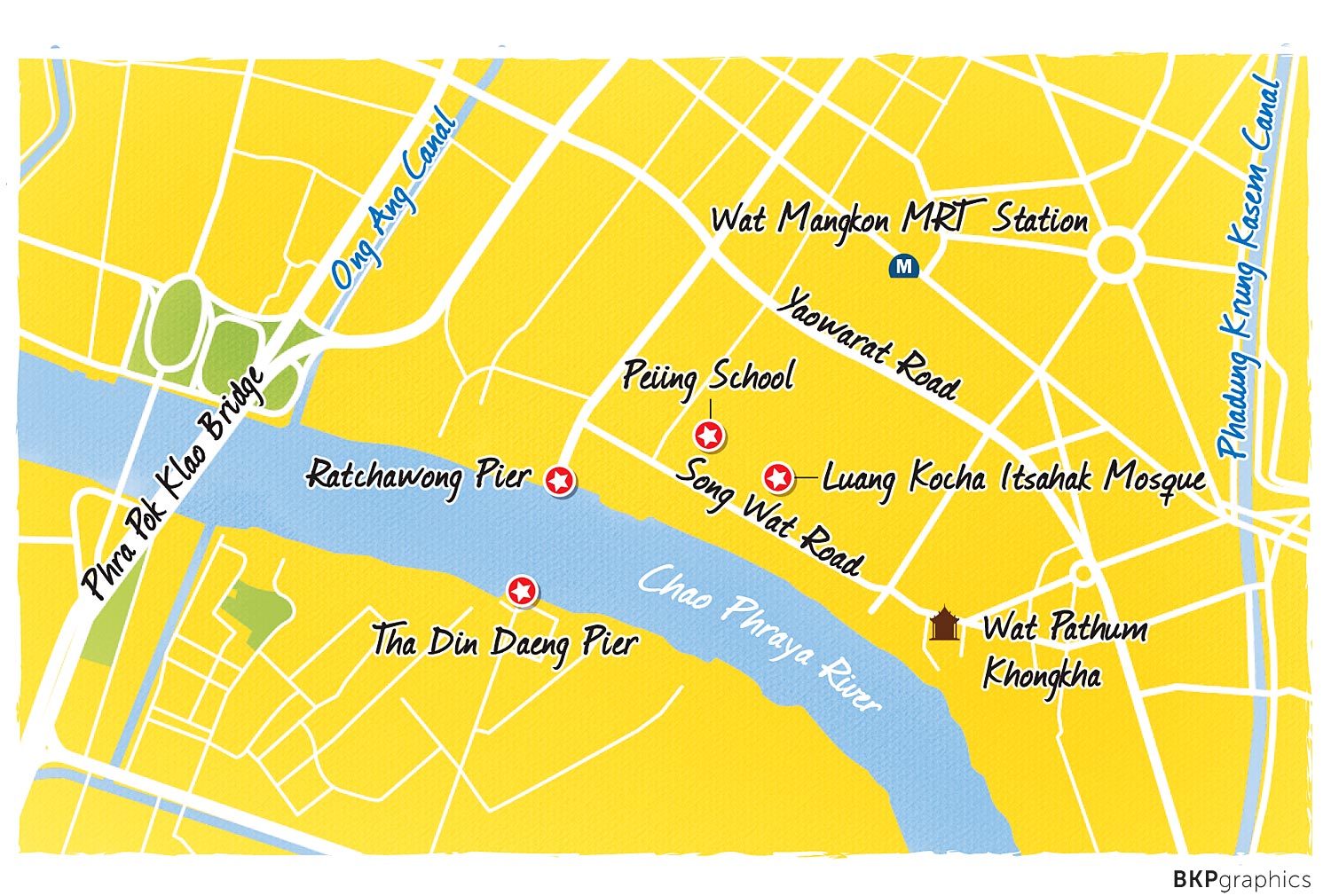