With nightmarish symbolism, The Platform makes terrifying the world hierarchy

With the whole coronavirus ordeal that we're experiencing in the real world right now, the times are full of social inequality and discrimination. When people are panic shopping, fighting at grocery stores over who gets to buy the last box of facemasks, somehow Netflix's new dystopian thriller The Platform doesn't seem too far-fetched.

Directed by Galder Gaztelu-Urrutia, with a cast including Iván Massagué, Antonia San Juan, Zorion Eguileor, Emilio Buale Coka and Alexandra Masangkay, the Spanish film may, on the surface, look like an intense psychological thriller with extremely graphic and very disturbing images, but it still doesn't shy away from the universal allegory of the social class system and how we humans are inherently just animals fighting over resources.

The film is set in a seeming near future in which a large tower-style prison has been constructed to house inmates vertically stacked. Each level is just a square room with a hole in the ceiling and floor where, once a day, a platform descends the levels of the tower and stops at each floor. The platform contains various types of Michelin-standard food for inmates at each level. While they all should get their fair share of food, it's deeply inequitable in practice, as inmates at the top levels have the ability to take much more food and leave less for those below them, leaving people at the bottom to go hungry, and more.

Goreng (Massagué) wakes up one day in a cell he shares with a roommate named Trimagasi (Eguileor). We follow his life as he attempts to ration with Trimagasi and other residents, but logic and reasoning seem impossible. The situations that ensue soon jeopardise his principles and moral compass, when primal survival instincts kick in.

The Platform feels more like a conceptual, experimental film, with lots of nightmarish symbolism rather than trying to making sense based on reality, something we have seen in sci-fi and psychological thrillers like Cube (1997), Snowpiercer (2013), Circle (2015) and even the edge-of-your-seat horror elements of Saw (2004). This is a tense thriller and it steadily becomes a horror as Goreng discovers what it takes to stay alive. And we the audience keep rooting for him every step of the way, to see if he'll ultimately pull through as each level's characters spiral down into madness. 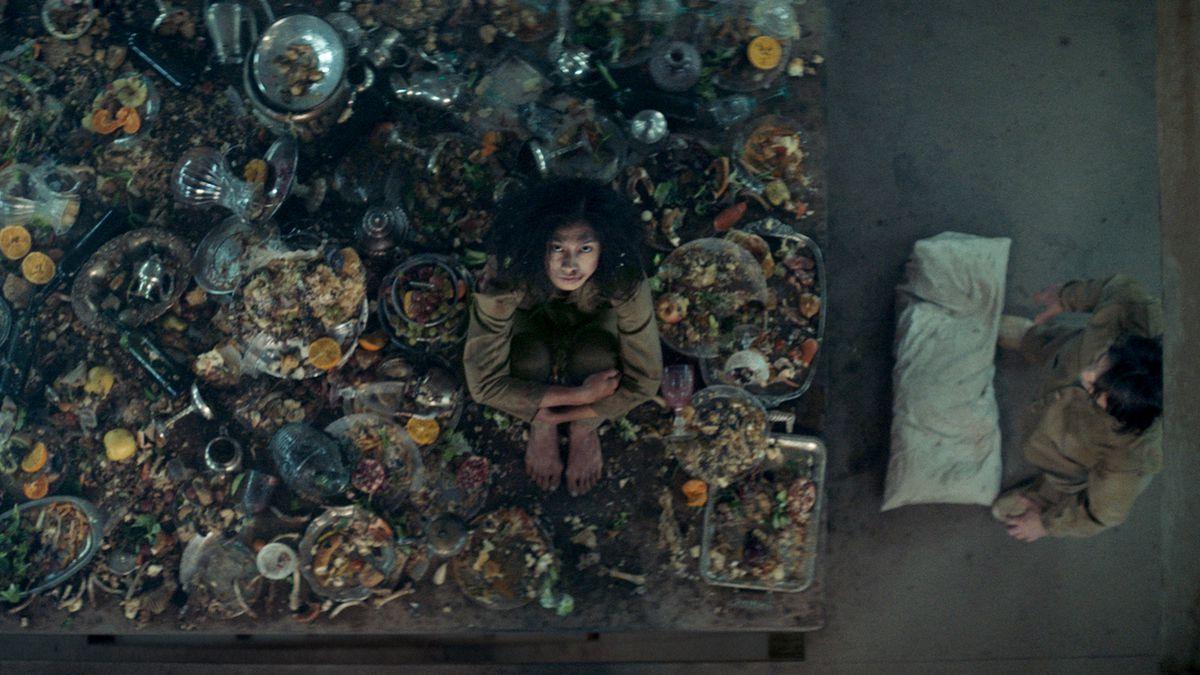 The Platform is definitely not for everyone. As the tension of this movie is built at a steady pace, we're presented with a bunch of shocking, disturbing images. And there is gore and brutality that are not for the faint of heart: eating of gross-out leftover food, a person going insane, suicides, murders and cannibalism. By the way, I'd recommend not to watch this movie while you're eating food. There is some incredibly gross stuff here that might make some of you throw up. So if you're not really a fan of such subject matter, The Platform is definitely not your cup of tea.

Nevertheless, the film succeeds at conveying some profundity in socio-psychological matters. It's an interesting look at the mentality of having people on the top, who really can take way more than they need. It makes us examine what we are doing -- are we grabbing everything we need at the expense of those who may be less fortunate? The Platform is the type of movie that really speaks to our cultural moment, and no matter what level you're on, you'll be able to relate.