The legendary upcountry dining style endures, but for how long?

If you ever come across a hawker selling khanom jeen namya (rice noodles in fish and anchovy curry sauce) in a flea market upcountry, you will see diners sitting on small stools in front of the haab (the hawkers' containers loaded with food), with their left hand holding a plate and right hand holding a spoon.

It may look awkward and unhygienic, as it is taking place right on the ground, but that is how it happened commonly in the past. Only a few of this kind remain.

In the old days people bought food mostly from hawkers. Some of them carried the haab to people's houses while others made a few stops at certain places. Some vendors had successfully opened food shops or restaurants and chose to display their hawking tools as memorabilia and to show that they had been in business for a long time. 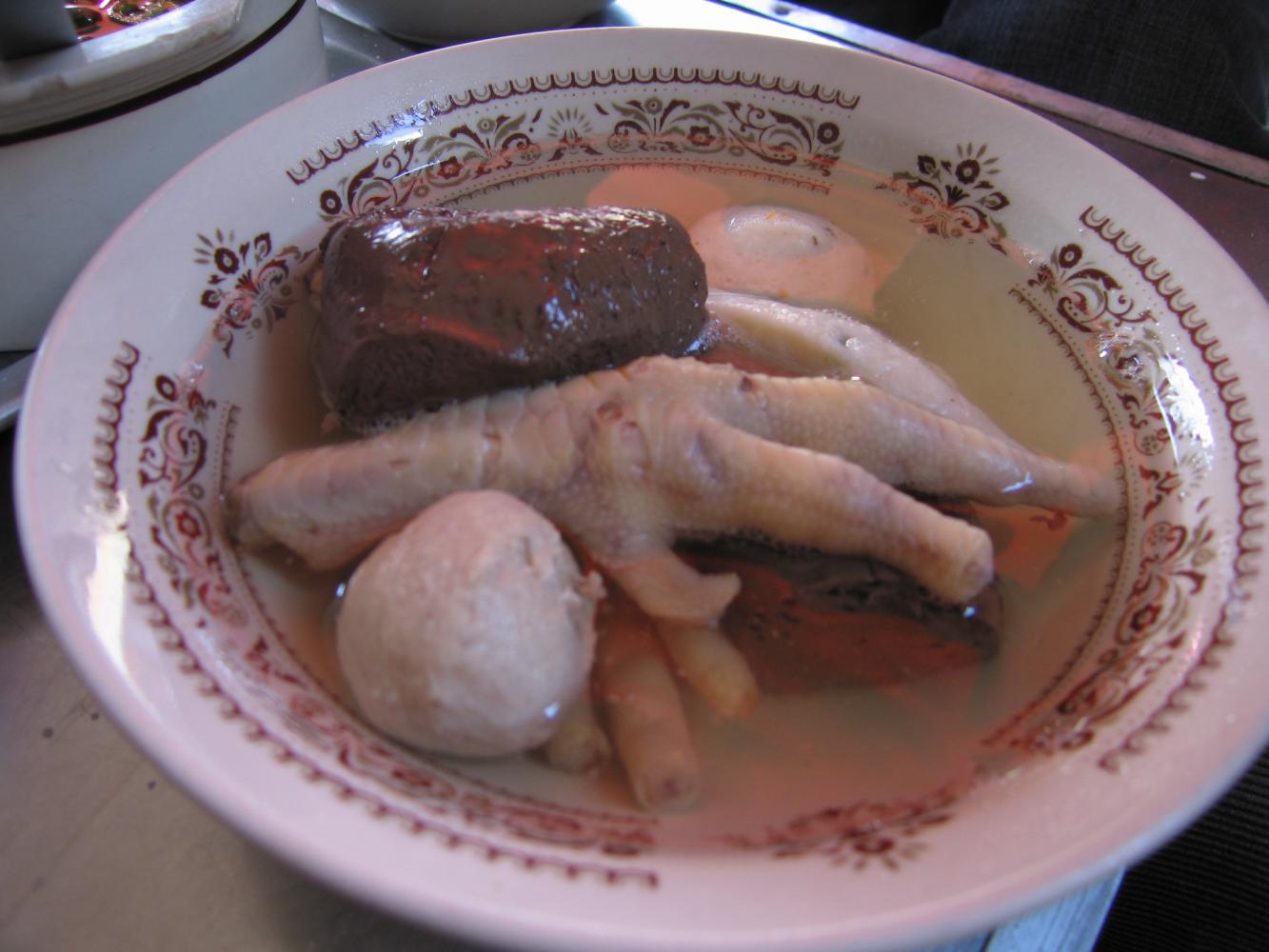 Kuay tio khae (Hakka noodles) on a sidewalk of the entrance to Nang Lerng market still uses the very same metal container set that was used in earlier days. The cabinet-like container is unique in shape and design, and hardly seen in other noodle shops.

Designs of hawking containers varied according to the individual vendors, who made them for functionality, practicality and convenience for both seller and buyer.

Beef satay is hard to find nowadays. It originated prior to other types of satay and was usually sold in a Muslim community of peddlers who wandered around or made stops at certain locations. The hawker's haab comprised a charcoal stove, a pot of peanut sauce, a mini cutting board for chopping cucumber, chilli and shallot for ajaad sauce preparation at the front set, with an extended wooden board on which the customers could place satay plates and dipping sauces. The other set functioned like a storage unit which kept satay boxes, plates, charcoal, vegetable containers and a washing basin. Customers were seated on foldable leather stools. This type of beef satay haab no longer exists.

Boiled cow intestine with steamed rice was very popular among low-income workers, as it was cheap and filling. Cow offal was boiled in a huge basin (a multi-functional enamel basin used as container, pot and washing basin) until very soft. It was then put on a metal cooling rack placed on the edge of the basin. A large cutting board was placed nearby. Customers were seated on mini-chairs around low tables. Boiled cow offal is made no more due to the fatty nature of the food. The dish becomes oily as soon as it gets cold. The vendors have to clean the bowls in hot water; otherwise the fat will not go away. 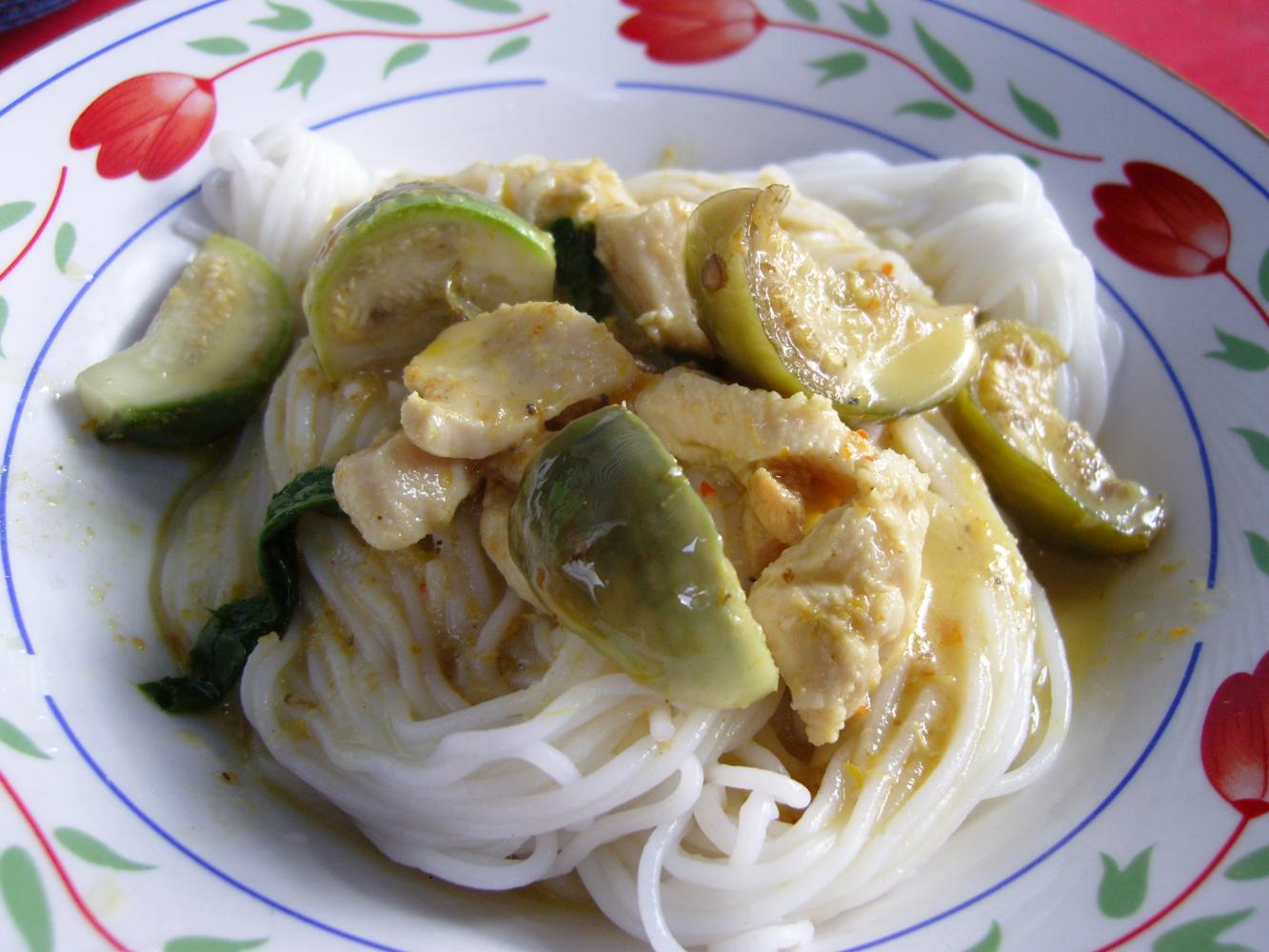 A variety of khanom jeen dishes.

The famous Khao Gaeng Karee Nai Yong located in Soi Issaraparb, Yaowarat, has grown by leaps and bounds in the past 50 years. It began with an ordinary haab selling curry with rice in front of the Opera House in Chinatown from 8pm until midnight. Initially the haab comprised only three pots of curries -- gaeng karee nuea (yellow curry beef with curry powder), ­gaeng karee moo (yellow curry pork with curry powder) and red curry snakehead fish with gourd; a large bowl of sliced cucumber and chopped red chilli; and a tray laden with Chinese sausages. Customers can order the whole piece of sausage or have it sliced as wished.

At the same opera house, after Nai Yong finished at midnight, kuay jab nam sai (rice noodles in clear soup) took its place from 1-5am. This kuay jab was the first of its kind in Bangkok. The broth was fragrant with a slight spicy taste of pepper. The clients could request the specific type and amount of offal they would like.

Mentioned above are some of the highly popular hawkers of the past. Many have successfully carried on their businesses to the present day. Many things have changed, including the posture of food sellers -- from sitting behind the haab to standing while preparing dishes for customers.

There are a few dishes that vendors have to sit down to make. The first example is kuay tio pak mor (dumplings with soup), originated in Panom Sarakham district, Chachoengsao. The dish has now spread to other places nationwide. 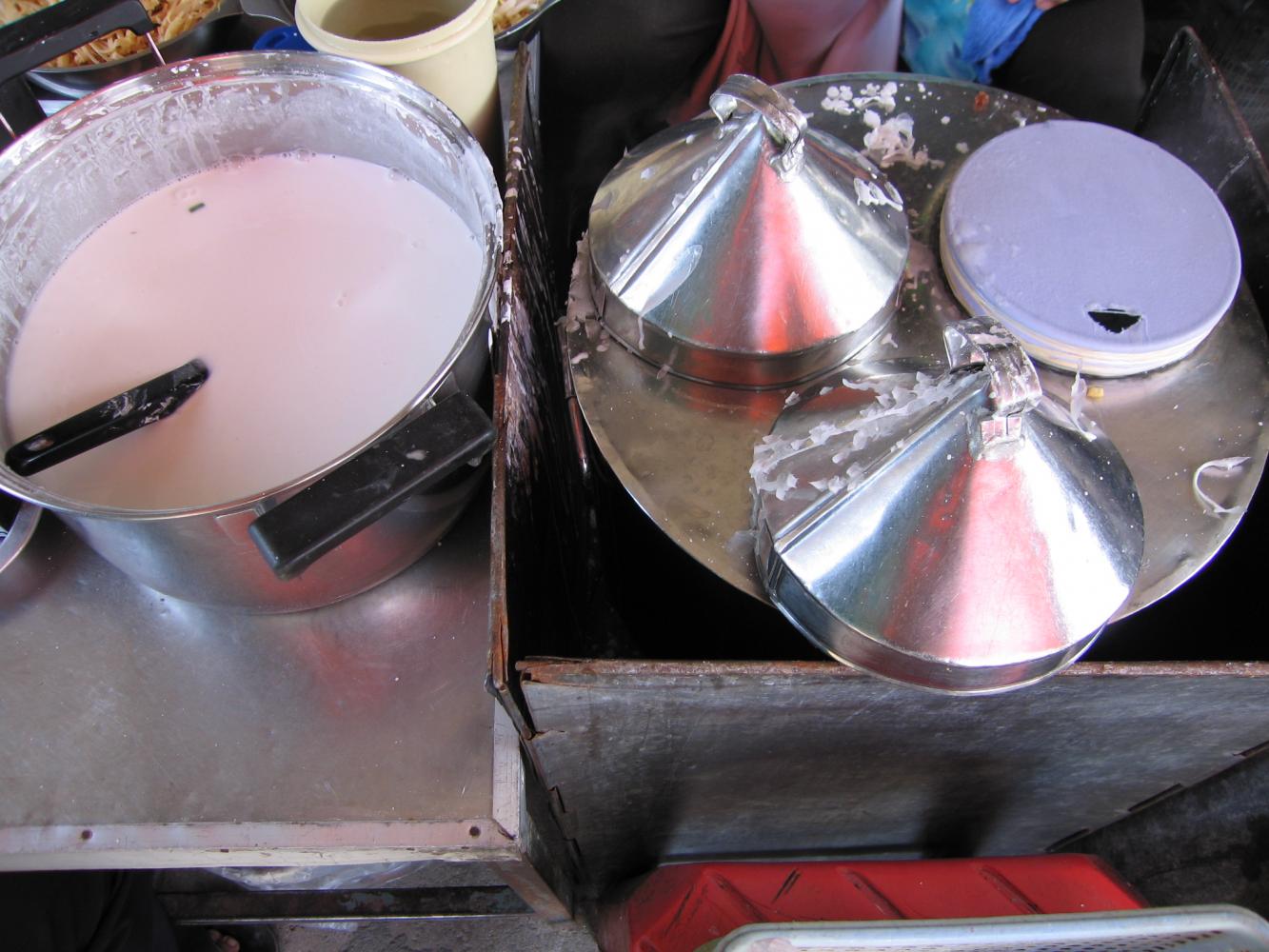 To make kuay tio pak mor, the maker sits on a chair and spreads a batter prepared from rice flour on a cloth stretched over the mouth of a boiling pot to form a thin crepe-like rice sheet. The filling mixture is then plopped on top before the rice sheet is rolled into a dumpling. Then the dumplings are put in a bowl before the broth is added. Customers can order toppings such as meatballs, chicken feet and pork bone, all of which can be seen displayed in the haab.

Another famous hawker is a khao ­gaeng vendor located next to the shophouse opposite the healthcare centre near a municipal market in Phetchaburi province. It has a thriving business selling green curry, khanom jeen namya, khanom jeen nam prik, and khanom jeen sao nam. This vendor has been at the same location for many years. Customers are seated on small chairs facing the seller. The place is recognised as one of the best khao gaeng shops in Phetchaburi.

Sitting and eating in front of the hawkers haab is good in many ways. The vendor can sit while preparing the dishes, which is obviously less tiring than standing is. Customers can see everything in the haab, choose and order what they want easily. When a plate of food is handed over, the eater can tell right away if it is made correctly, as ordered. Once the vendor and the customers get to know one another, they can have fun chit-chatting. Sitting shoulder-to-shoulder and eating in front of the haab is reminiscent of a past lifestyle.