For Somsak Rattanawanwimon, the owner of Kuai Tiao Pak Mor Yon Yook, a vintage-style steamed rice dumpling noodle restaurant in Bang Yai market, running a food business during the pandemic has been challenging. Once filled with diners and people queuing outside on a busy day, at one low-point during the pandemic, his shop had no customers at all. 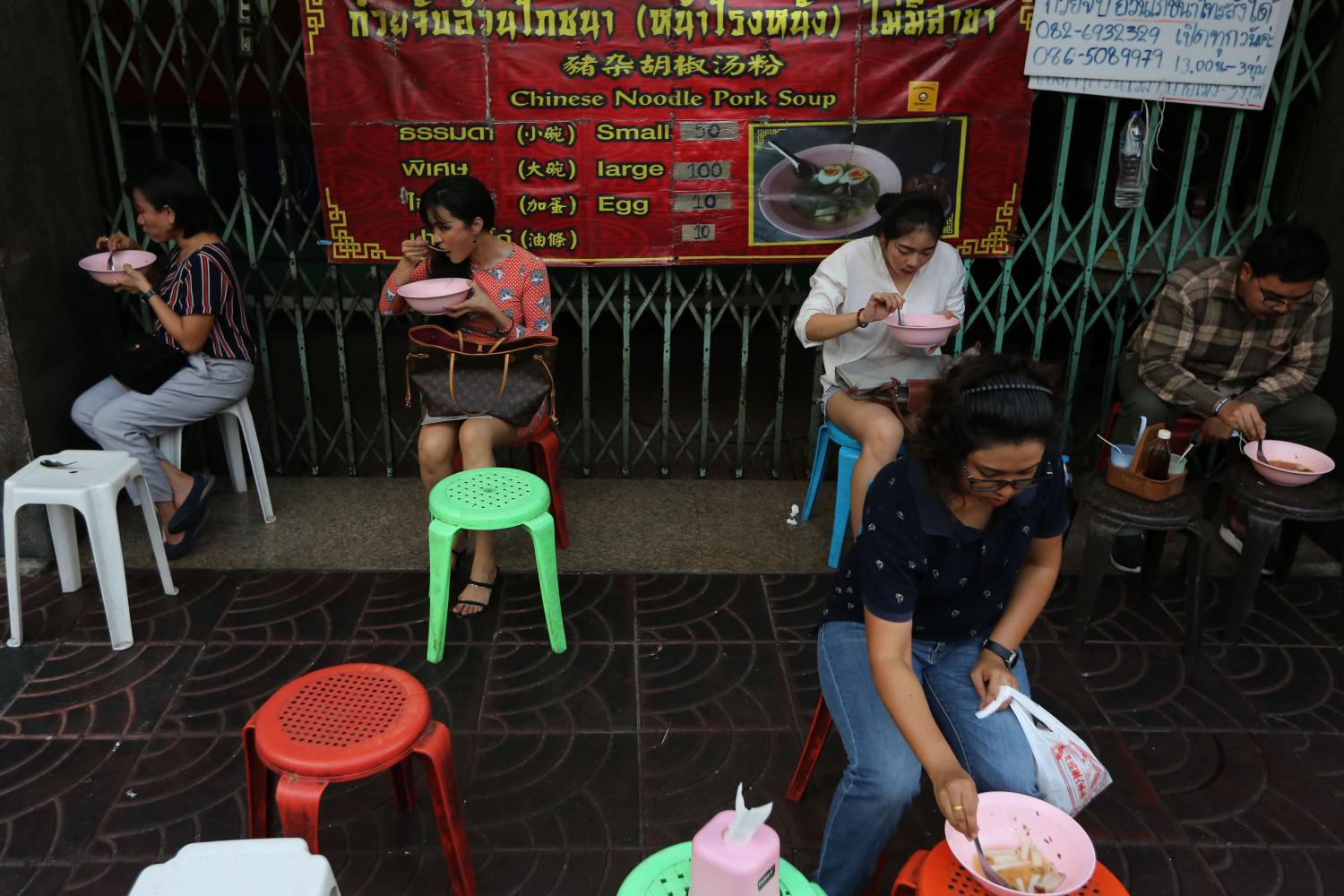 Moreover, shifting his strategy to takeaway and delivery from sit-in dining did not improve the situation. In the end, Somsak decided to close the restaurant for one month, however, he decided to reopen earlier this month.

"The reopening was better. There were customers coming, but it still wasn't as good as how it normally used to be," said Somsak.

Following a decline in the number of new coronavirus infections in Thailand, the government decided to loosen its grip on various establishments. As a result, parts of society have started easing themselves back into operation while also settling in with the new normal that has been adopted since the pandemic began. After relying on food delivery and experimental home-cooked meals for over a month during the lockdown, diners are now gradually going back to eating out at restaurants, both streetside and in the recently opened shopping malls.

The restaurant business has particularly experienced a strong impact during the spread of Covid-19. From dining in, many restaurants adopted online food delivery and takeaways to continue their business, while others decided to shut their doors temporarily due to the lack of customers. However, as the government has now decided to allow people to eat out, restaurants are seeing themselves adapting yet again to comply with new rules such as providing hand sanitiser, adopting social distancing, and prohibiting alcohol consumption among others. Some are also taking a playful approach to add cuddly panda plushies and colourful dragons on empty seats to make diners feel less lonely during a more isolated eating-out meal.

As for Somsak, after the reopening of his steamed rice dumpling noodle shop, he has adopted to state protocols such as cleaning the place every two hours and offering hand sanitiser and temperature checks. He has also added partitions between seats, which he said cost about 100-200 baht each.

"If I don't add the partitions, I'd worry about my staff, too. So, I decided to invest a little in it. Normally, the restaurant can seat 25-30 people at a time, however, with the partition and social distancing measure, I can only take eight to nine people. So, that's like 70-80% of customers missing," he added. 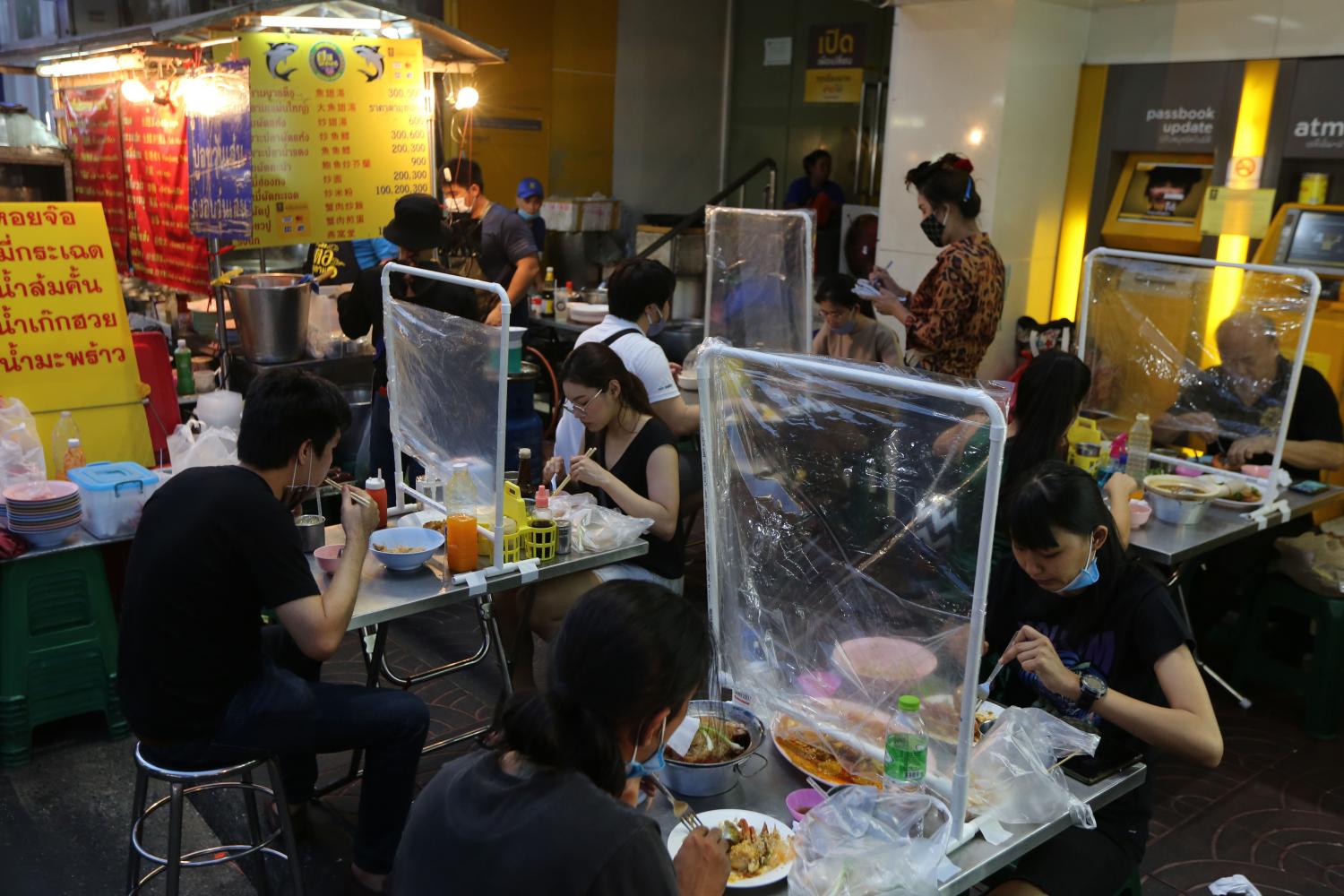 Diners eat at a streetside eatery in Chinatown with a partition separating them.

With the current low number of daily infections, how careful must customers and restaurant operators be anyway?

Assoc Prof Chalat Santivarangkna, director of the Institute of Nutrition at Mahidol University, said that despite the seemingly lower risk, both parties still have to remain alert and careful.

"We can never know if anyone is asymptomatic. There's also a window period to this disease. On the other hand, we could also be carrying the virus ourselves. So, it is suggested that everyone continue to observe protective measures such as washing hands and wearing face masks," said Chalat.

Some of the most concerning aspects of eating out nowadays have to do with the density of the crowd and the level of hygiene being observed.

Chalat said that restaurants should be watchful of the distance between tables and make sure the space is well ventilated. He also suggested some additional ways restaurants can adjust during this period, such as arranging in-house traffic so people only walk in one direction and offering contactless payment options.

The partition that many restaurants, including Somsak's, have installed is also a helpful idea to protect against droplets that can be released while talking, coughing and sneezing.

"If there's no partition or barrier at all, these droplets could go to the person sitting nearby. While it can't protect against everything, at least it could help limit the spread," said Chalat.

On the table, the normally small piece of tissue paper available may be switched to bigger alternatives that customers can use to cover their entire mouth when they need to sneeze or cough. Additionally, a rubbish bin with a lid should be placed by each table so that customers can dispose of used papers right away.

Moreover, restaurants may have to provide more space for washing hands. The use of automatic faucets and soap dispensers has been encouraged to limit contact and hand dryers can be replaced with the use of single-use, disposable tissue paper instead, with a bin complete with a lid placed nearby. The use of hand towels hung by the sink, which are used repeatedly, is discouraged.

Restaurant staff should also wear masks and observe strict hygiene protocol. If possible, there should be separate staff for each duty and if the staff who handles money also cooks and serves the food, there could be a higher risk of cross-contamination. Meanwhile, during cleaning, the rag should be washed in between wiping each surface to also avoid cross-contamination and the additional use of disinfectant is also encouraged.

While restaurants should give their best effort in adopting these protective measures, diners also have to be responsible and observe their own rules, which includes washing hands before and after eating out and avoiding leaving used tissues on the table as these should be disposed of correctly. Eating by hand, at this time, is still discouraged.

Since the spread of the virus, people have been encouraged to eat cooked, heated food and to avoid sharing utensils or cutlery. As the risk was higher at that point, eating uncooked food -- which may include anything from raw fish in Japanese cuisine and the Thai favourite like som tam -- was discouraged. However, as the situation is considerably safer now, there shouldn't be much of a problem in going back to eating these foods. 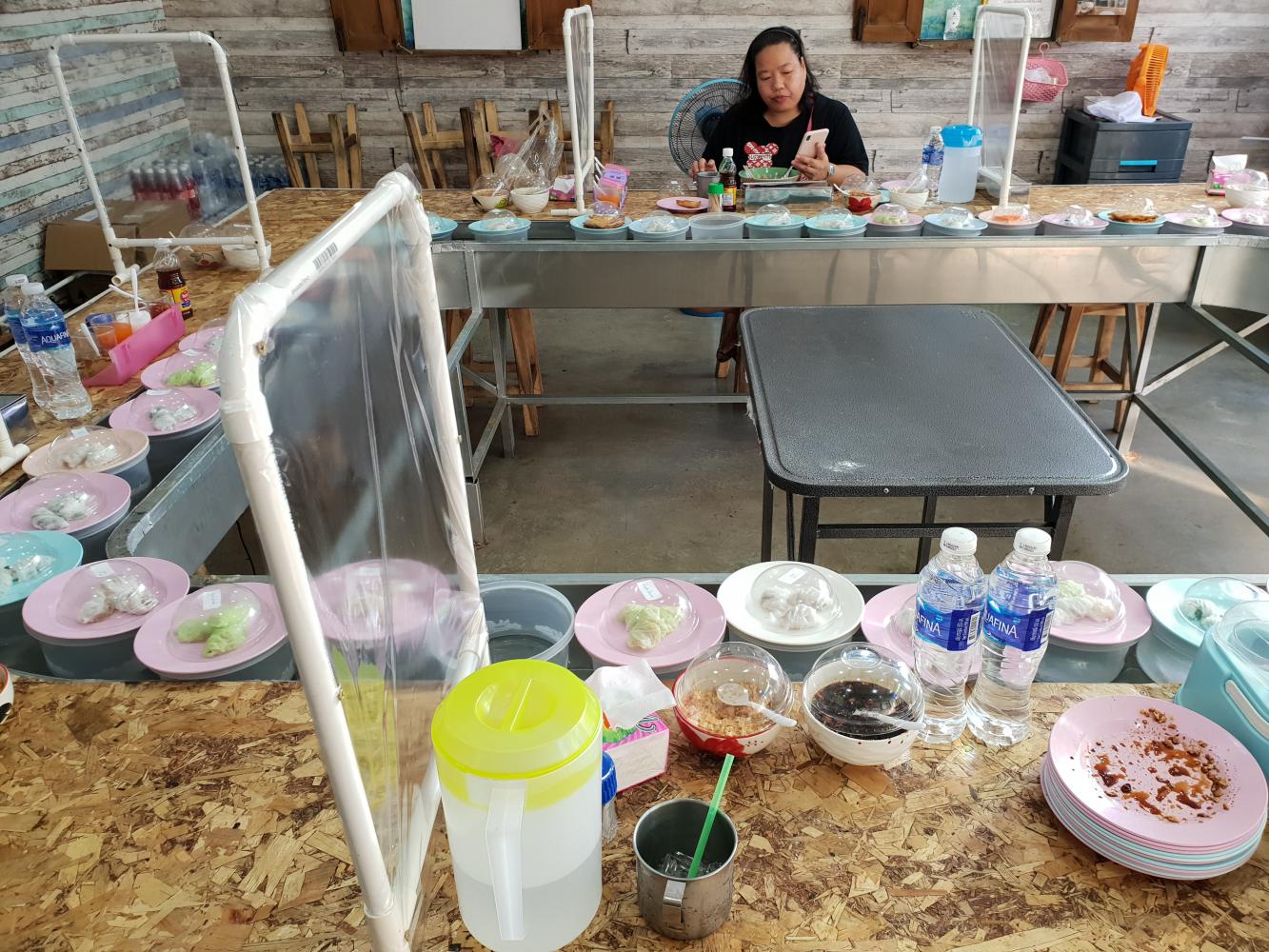 Chalat views that many of these measures are situational, and not a "new normal" per se. This includes the current measure of not sharing a pot of shabu, even between family members, which may seem irrational to some.

"Many of these 'norms' won't stay with us forever. They may last for a year or two. Once we have the vaccine, and once it's safer, we may go back to how we were before. So, I don't think many of the measures we are following now will actually end up as a new normal. However, some of them may, such as the move towards online payment and cashless society, for example."

For Somsak, the restaurant operator, he plans to adhere to these new measures for as long as the state decrees so, and may retain them even longer depending on the customers' feedback.

"Customer behaviour is changing," Somsak said. "So, now that they've acquired a new behaviour of using alcohol gel, getting their temperature checked and eating with partitions separating them, would they accept going back to the old normal? To an extent, some customers may already be used to these measures. So, I think we'll have to gauge their reactions, too, if they'd rather go back to how things were."

Chalat said that hygiene may play a larger role in a restaurant's credibility in the future.

"If people see staff not wearing a mask, they may choose not to go in. In a way, it's better now because people are so much more mindful of hygiene, which not only protects against Covid-19 but also other diseases. Good protective measures reduce health risks to both individuals and society at large. Vice versa, personal risks also depend on the overall situation in the society. So, it's now everyone's responsibility," said Chalat.