Picturing Potter all over again

To mark the 20th anniversary of the first Harry Potter book in Thailand, Life speaks to Arus Angchuan, the creative mind behind the upcoming commemorative edition

Do you remember your first time reading the Harry Potter books? For many who were born and raised in the last two decades, they will surely have the story of this young wizard and his epic adventures as part of their childhood memories. There's indeed something genuinely special about these novels by British author J.K. Rowling. Whether it's unique storytelling or the wonderful illustrations, they couldn't escape, becoming lost in this spellbinding magical world. But whatever the reasons might be, the Harry Potter series definitely cast its spell on children and readers all over the world.

And to commemorate the 20th anniversary of Harry Potter And The Philosopher's Stone in Thailand, publisher Nanmeebooks, which holds the exclusive rights to the translated series, invites readers back to revisit that magical moment once again with a new breathtaking box-set edition of both paperbacks and hardcovers coming out on May 27, with cover art drawn by Thais.

"As a huge fan of Harry Potter, both the books and the films, growing up, I never thought that one day I would become a person who designed artwork for the series," Arus Angchuan, a 28-year-old illustrator better known as Arch Apolar, recalled the day he received the news that his work was finally chosen by the publishers both locally and in England after months of submission.

"It appears that Nanmeebooks, by chance, came across my fan art of the young Harry Potter and a couple of other main characters that I posted on my Facebook page a few years ago. They asked if I was interested in creating a new cover for the Thai version. So I sent them some of my work though I didn't expect to hear from them again. But it turns out that they liked my work. This is a huge honour and definitely made my childhood dream come true." 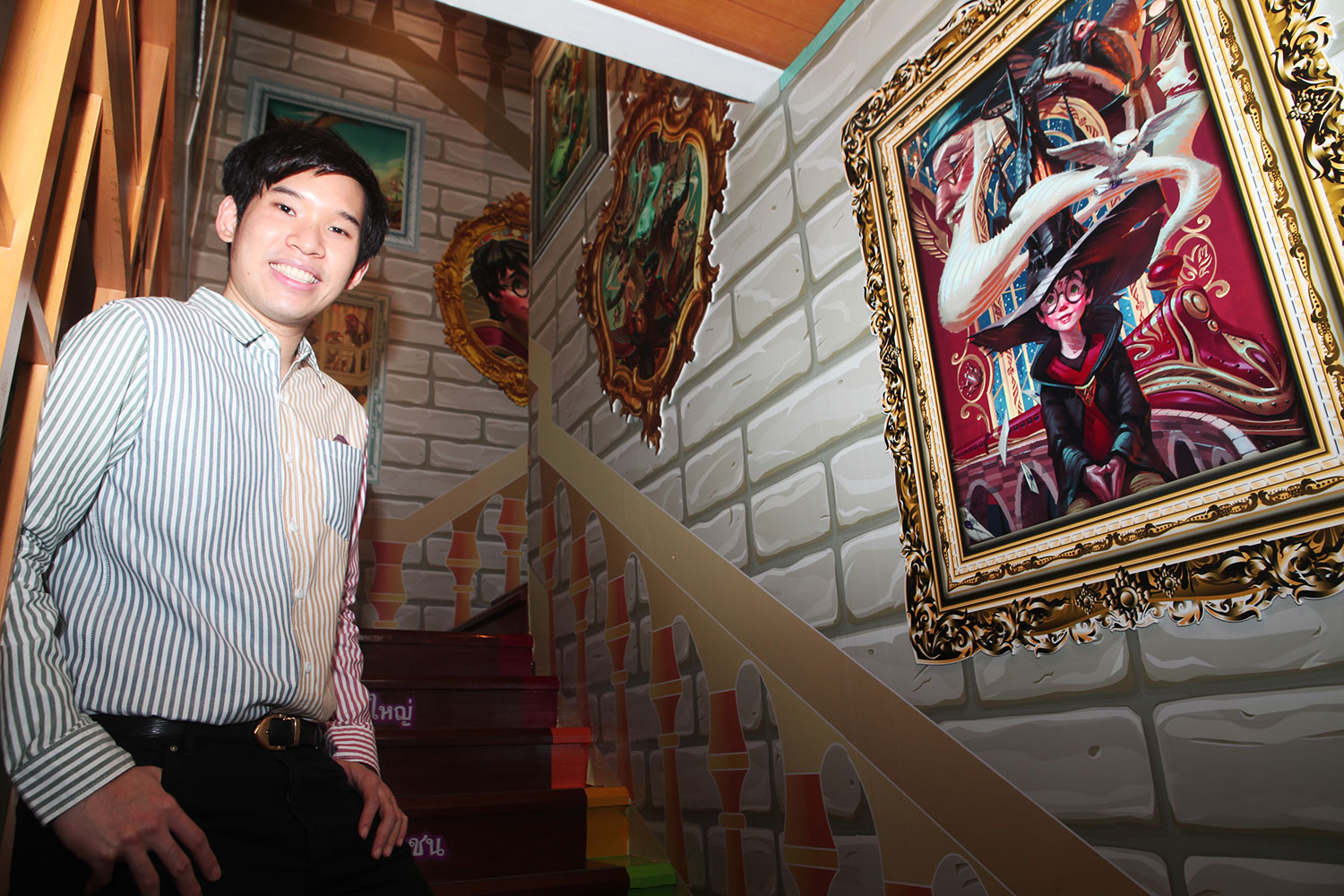 Having graduated with a degree in Architecture from Chulalongkorn University, and worked as a designer for Electronic Arts (EA), a video game company headquartered in California, today Arus is enjoying another chapter of his life as an illustrator, working on the iconic fiction characters.

Arus is responsible for the covers of all seven volumes, chapter headers, illustrations, postcards, and that amazing fold-out die-cut showcase of Hogwarts castle. The editions will be available to purchase singularly, or you can buy the box set in either paperback or hardback. The box set will include eight giant postcards and a case that opens out into another work of art. Plus, if you purchase the hardback box set, you can take advantage of a special hanging decoration.

His cover designs are incredibly detailed and influenced by vintage book styles, and each one focuses on some of the key elements and hidden details from the novel. For example, the Philosopher's Stone cover features Harry in his Sorting Hat; Chamber Of Secrets has an image of a flying car as well as Tom Riddle and Dobby on the cover; and the cover of Deathly Hallows sees Harry, Hermione and Ron unite on the cover, along with Hagrid and Lord Voldemort. All these beautiful drawings and their vivid colour pallette give us a whole new way of looking at one of the world's most well-loved series of novels.

"The publisher gave me absolutely 100% creative freedom. So during the 10 months working on the project, I had to make sure that I put all my effort into this work and created something that is bold, relevant and exclusive for Thailand," said Arus. "As a fan of the series, I tried to come up with what fans would really want to see on the covers. I've sometimes been fascinated by fan art rather than official artwork because you can feel that they've created from honesty and true love. So I would like this version to be like a love letter from fan to fan." 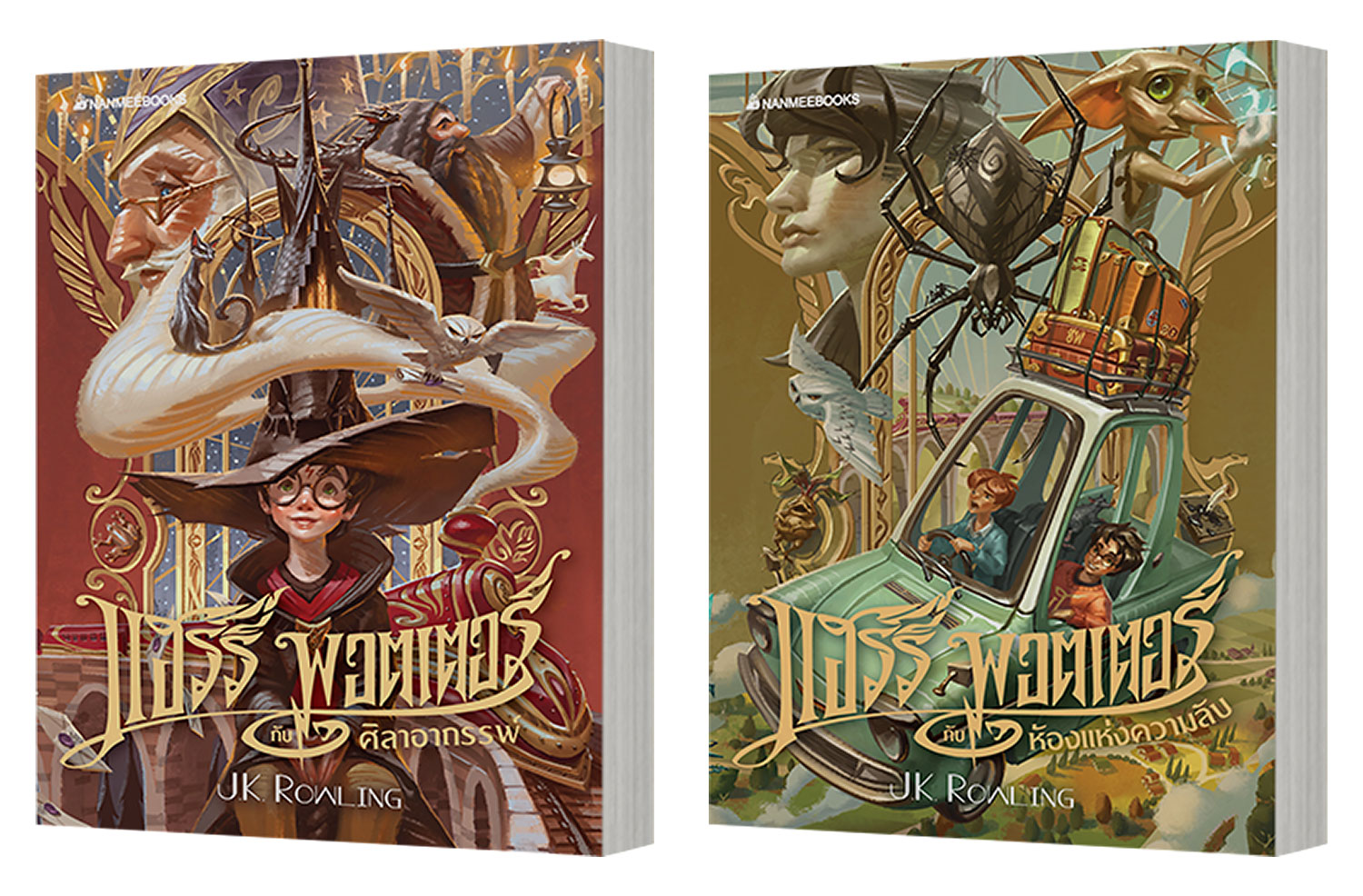 Arus revealed that the new designs also serve as a modern homage to his idol Mary GrandPré, an American artist who did all the illustrations of the first-edition Harry Potter books in the US, and was one of his inspirations to learn drawing in the first place.

"I was inspired by her style so much. My most favourite cover that she designed was the fourth book, Harry Potter And The Goblet Of Fire. Something about the cover appealed to me the most as a kid," he explained. "With its beautiful green and blue colour palette, and images of Harry with three other chosen players to take part in the Quidditch World Cup in the background -- I tried to bring those elements back with my version. Well, it's kind of a spoiler, but I did use a similar [colour] palette. But as one fan to another, I hope fans of the series will notice that."

Arus believes that what makes the story of Harry Potter so uniquely interesting and beloved by many is that there are so many different characters. While more and more new characters are introduced in each book, each of them is important and adds a different dimension to the story. All of them have their own backstories, and nobody is without their own secrets. So he believes each reader has their own unique answer when it comes to their favourite element of the Harry Potter universe.

"My favourite thing to draw while working on this series would be reimagining settings and characters that haven't been interpreted as much before, such as Luna Lovegood or Ginny Weasley," he said. "So I hope fans of Harry Potter will be delighted to see their favourite characters on the cover for the first time."

Thailand's 20th anniversary box set of Harry Potter And The Philosopher's Stone will be released on May 27, but fans can order now by contacting the publisher directly at contact@nanmeebooks.com.