The curfew has been shortened. The booze ban has been lifted. Malls have reopened and so have restaurants. Bangkok is going back to normal! Or is it? As citywide measures start to ease up, Guru checks out what has changed in this city of ours. Welcome to Bangkok's new normal.

The BTS and MRT have similar measures implemented on trains and at stations. Temperature checks and hand sanitisers can be found entering stations. At the BTS, staff do temperature checks manually, while the MRT has a machine stationed near the metal detectors. I took the trains on different days and at different times during the day. For the most part, there wasn't too big of a crowd inside the train or at stations. Even when I took the train home on the first day of the malls reopening, the number of people was still fewer compared to Bangkok weekends back in the day. Social distancing is being implemented on the trains. There are marks on the seat so that everyone sits one seat apart from each other. That doesn't mean people standing are apart though. Apart from seats now being empty despite it being the middle of the day or 7pm, the trains are less crowded but look the same as before. If you're hoping to maintain a safe distance from people at all times, you won't be able to do it on the BTS or MRT. 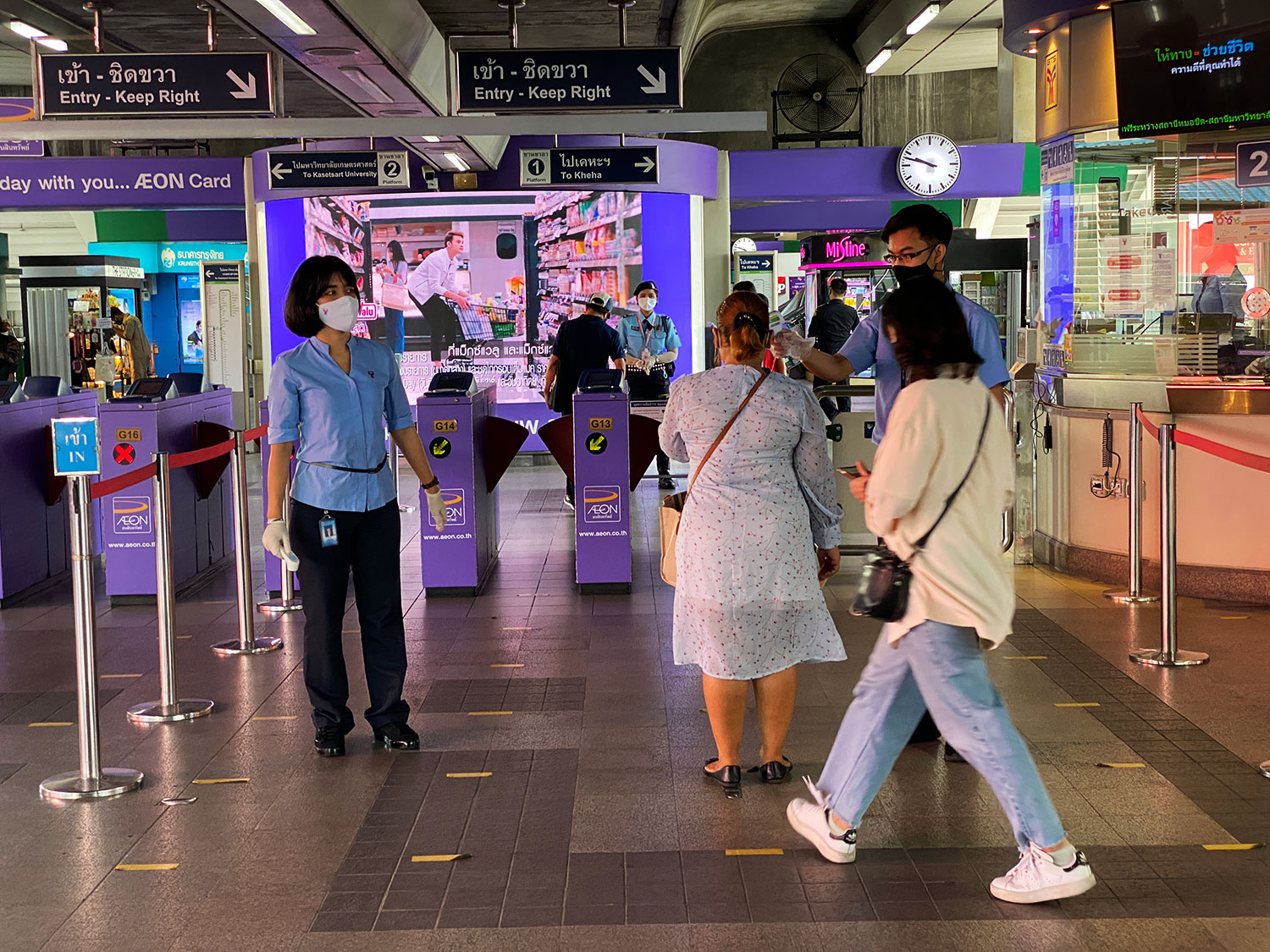 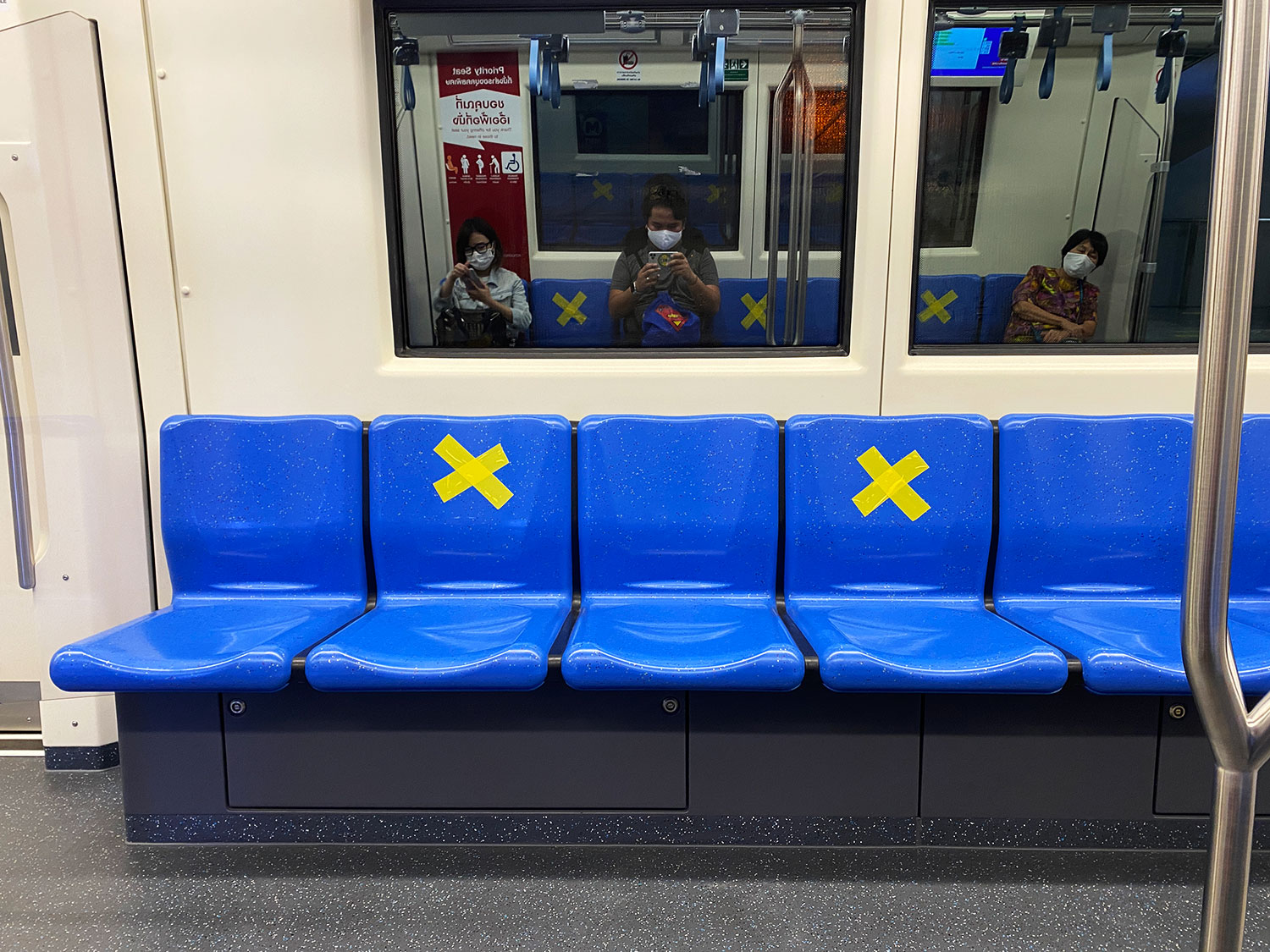 I visited Lumphini Park on a Wednesday at 10am hoping that the sun would be a little merciful this time of day. I forgot I was in Bangkok. It didn't help either when I found that the main entrance of the Lumphini Park, where the statue of King Rama VI is, was closed. I had to walk to the Ratchadamri entrance, across Chulalongkorn Hospital to enter. At the entrance, a number of signs can be found informing park-goers of the safety measures. Masks are a must, those with a temperature above 37.5C aren't allowed in and the park has designated zones for walking and running. However, there wasn't really any strict implementation of the zones and people were just walking and running around freely. At 10am, there were just a handful of people in the park. Social distancing, which was encouraged but not necessarily implemented strictly, was easily practised due to the wide open space. People did keep a good distance away from each other and many wore masks even while running. One man even had a face shield on as he was jogging. The paddle boats are not operational, as yet. 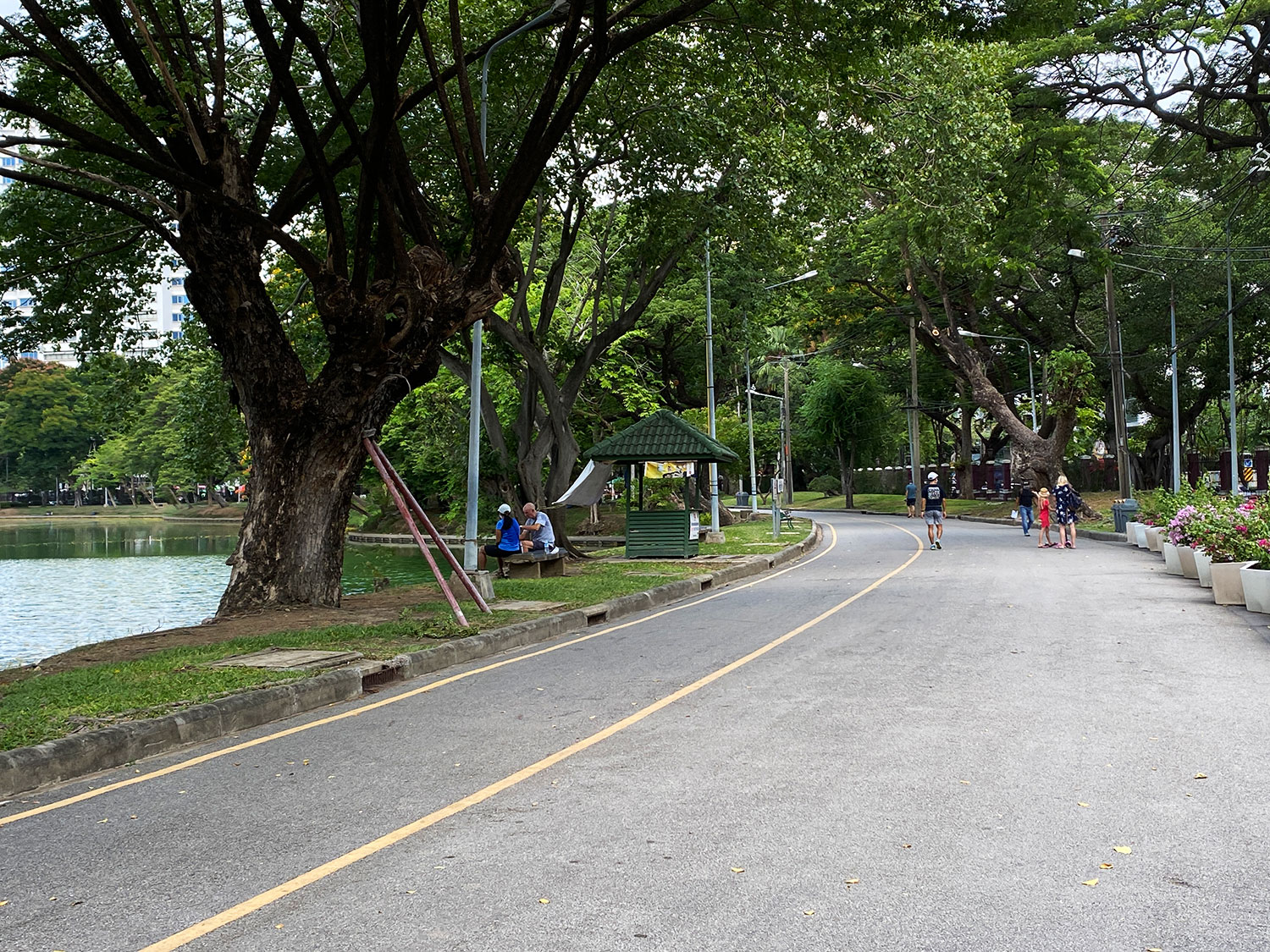 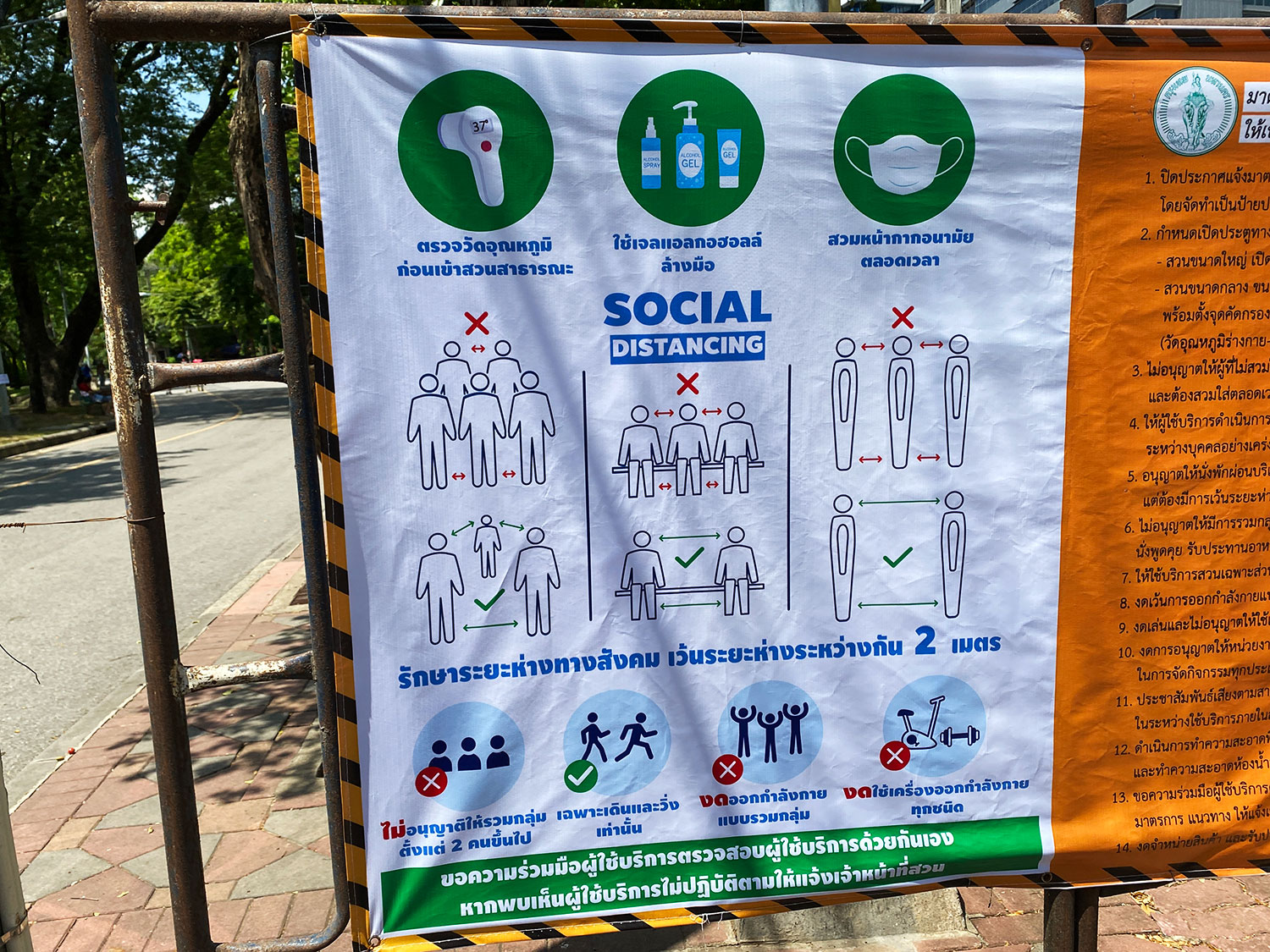 I decided to fool myself into thinking I was cultured so the second place I visited was Number 1 Gallery, an art gallery at Silom, which has a Covid-centric exhibition going on. I visited at 11am on a Friday and I had the gallery all to myself. However, there were little signs on the tables, which showed where people can sit so that everyone is at an appropriate distance from each other. That was the only Covid safety measure implemented. The exhibition was interesting and is worth a visit, preferably at the same time and day as me when you can have the gallery to yourself. "Human-19", Until May 30, Number 1 Gallery, Silom 21, Tues-Sun, 10am-7pm. 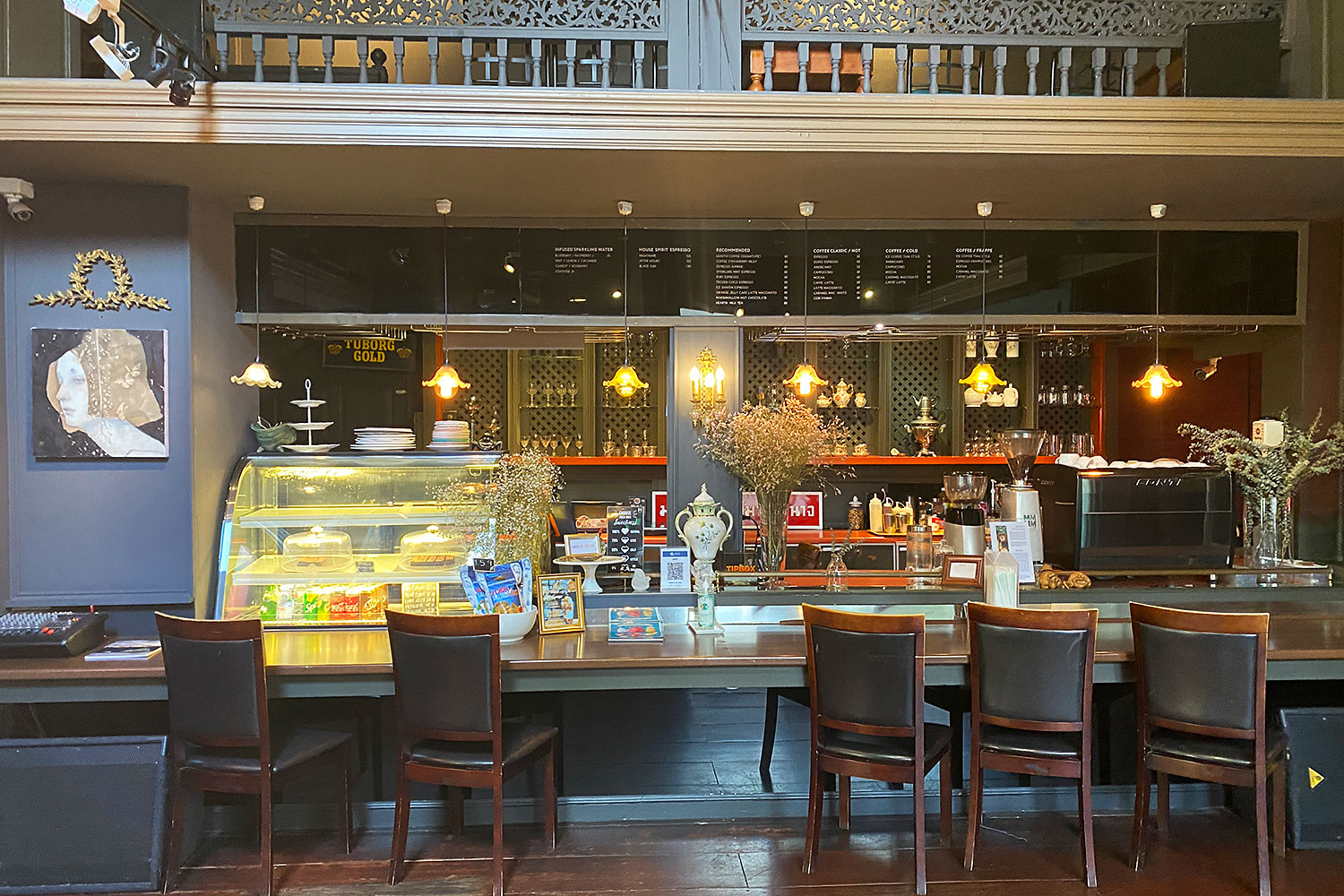 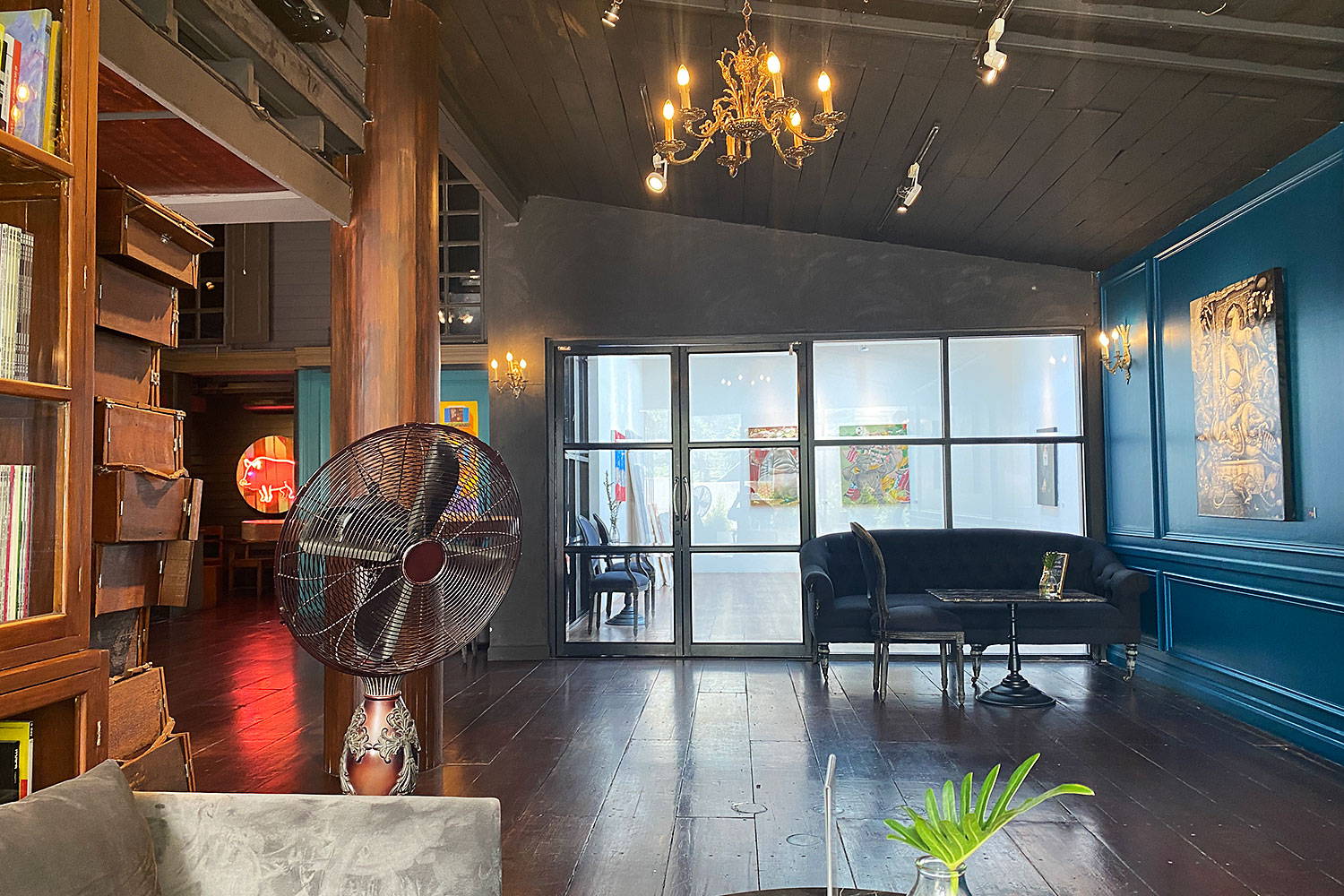 The train markets at Srinakarin and Ratchada are crowd-favourites so I was a little nervous when visiting them. I decided to visit the Srinakarin location first and since I was afraid of being engulfed by the crowds, I thought it would be best to go early. I got there at around 5pm and as expected, I was greeted by a temperature check at the entrance and got an honorary sticker placed on my shirt, which signified that I'm not "hot". There were a few restaurants already open. A seafood restaurant, where barbecued shrimp is served on your table and you have to wear a plastic bib, already had a few customers. However, bars where live music would usually be playing were closed, following government protocol. There were a few vendors still setting up as I walked around. If you wanted to do some post-quarantine shopping, you probably have enough stalls to shop at. I'm usually more inclined to snack when visiting night markets but unfortunately not everything was opened. I expected a large number of people but fortunately, there weren't that many. However, I suspected it may be because I was there early. I visited the Ratchada location on a different day at around 6pm. For those of you who've visited both places, you'll know the Srinakarin location is more spacious so social distancing is more possible, but there were only a few people in both locations though that's probably not the case now. It was pretty much the same deal with not all vendors having opened and bars being closed. There were more food options in Ratchada though, most of whom put plastic wrap dividers on their tables. Hand sanitisers are all over the place, ingeniously placed in contraptions that require no hand-touch; you use your feet to dispense them. Once you get into the alleys of the stalls there's no avoiding people. However, this didn't seem to faze any of the people that were there. In fact, a number of them were posing for photos that they most likely posted on their Instagram later to make their followers jealous that they've finally seen something other than the four walls of their homes. 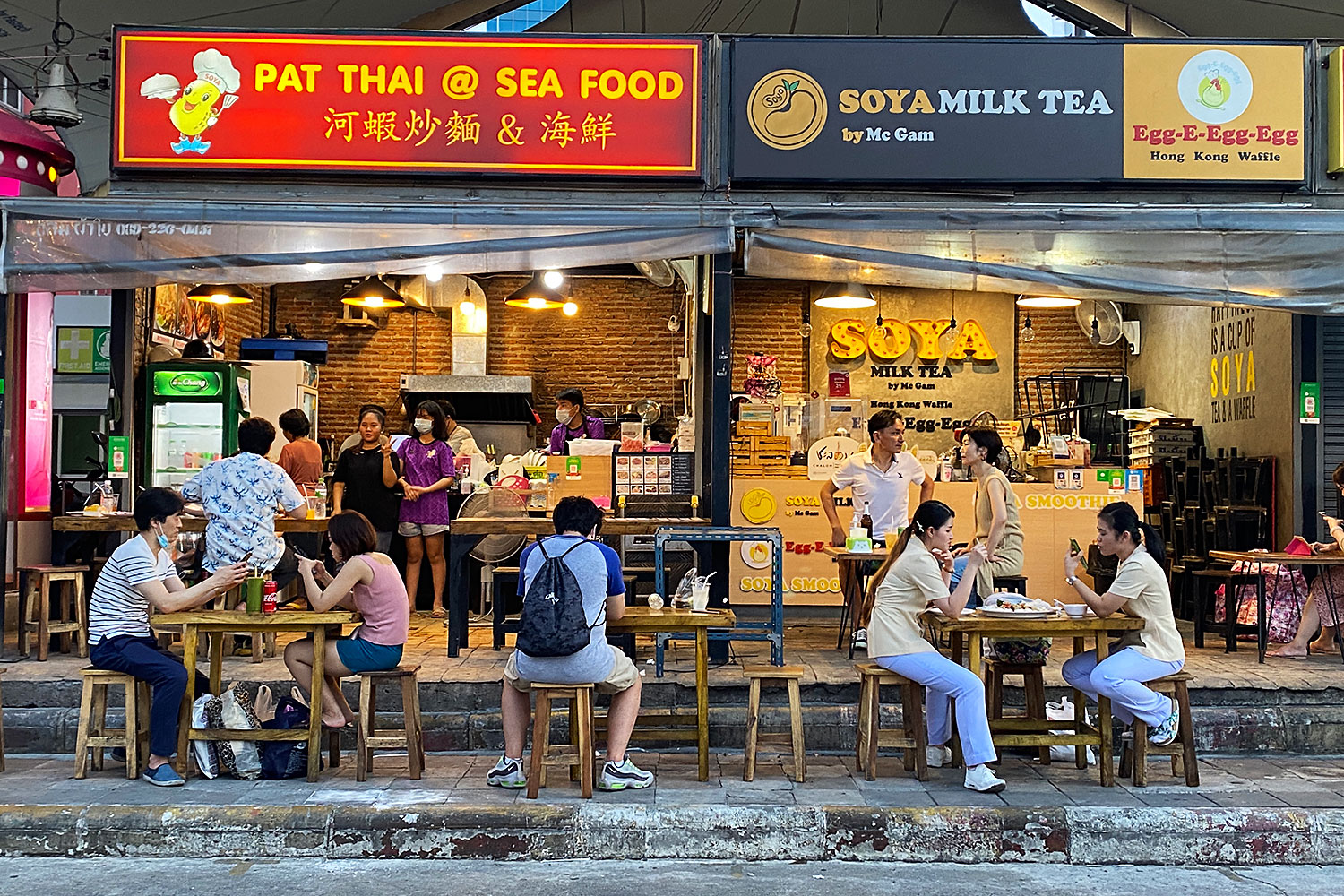 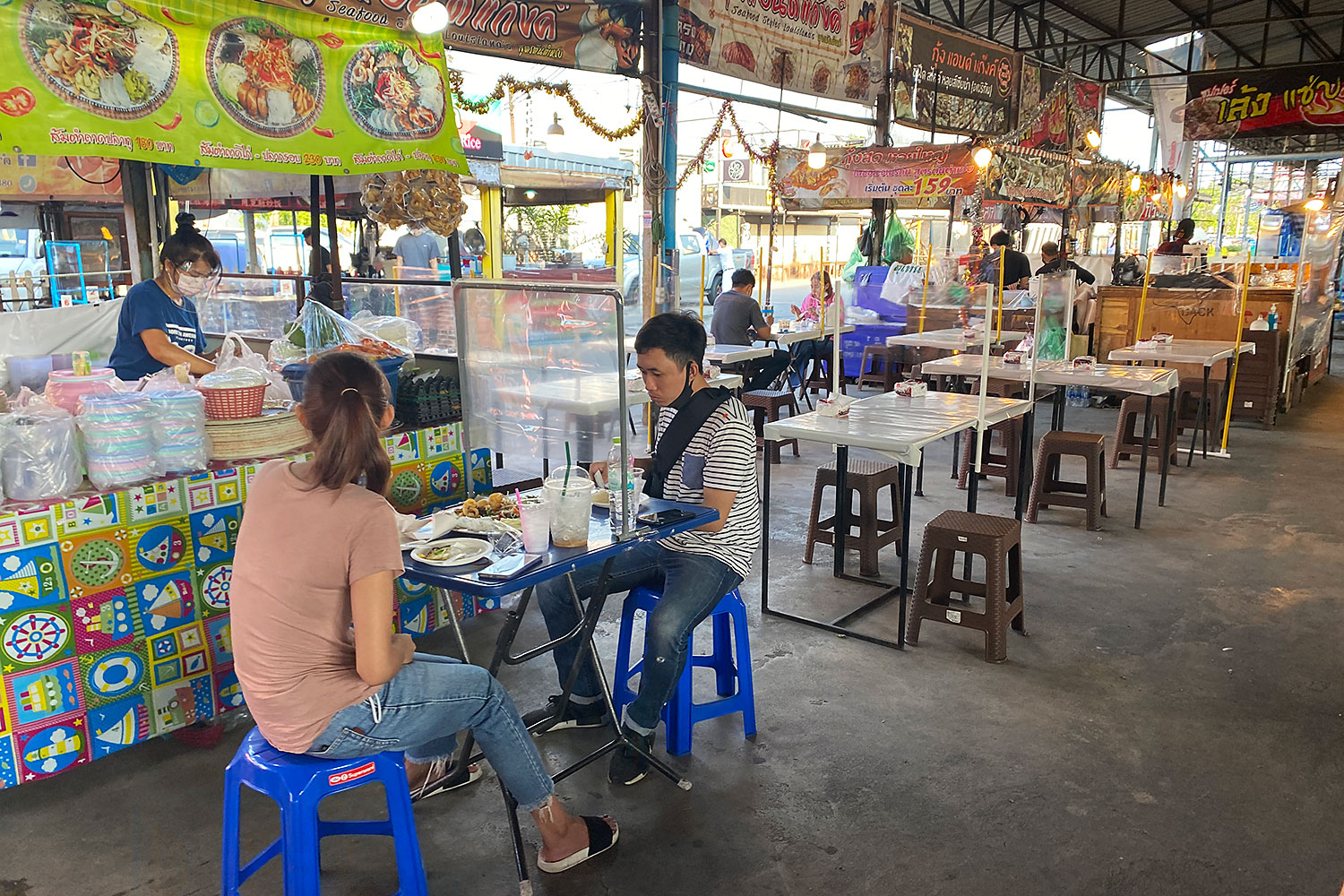 At Chatuchak Market, I was met by a line at its gates where there were manual temperature checks, complete with "not hot" stickers. Once inside, I stuck by the main road that surrounded the market for a while. The number of people was significantly lower than the usual crowds in the market pre-Covid. Surprisingly, I encountered a lot of foreigners, some with children, just walking around the market. Despite the relatively fewer number of people, Chatuchak's narrow alleyways make it hard to keep a safe distance from others. Ironically, one of the social distancing signs was placed right above the entrance of an alleyway. The market's numerous food and beverage vendors are sporting masks, as well as dividing tables and covering their stalls with plastic wrap. At a stall where you can quench your thirst, the vendor was wearing a face mask though she wasn't wearing gloves. The foreigner buying drinks for her three kids didn't seem to mind though.

Aside from all the new rules and measures, the pandemic has resulted in curious items being sold around the market. There are the expected items like masks and sanitisers but there's also apparel like the "Coronavirus World Tour 2020" shirt. Too soon? I guess we'll never know until you buy it and wear it outside the country. 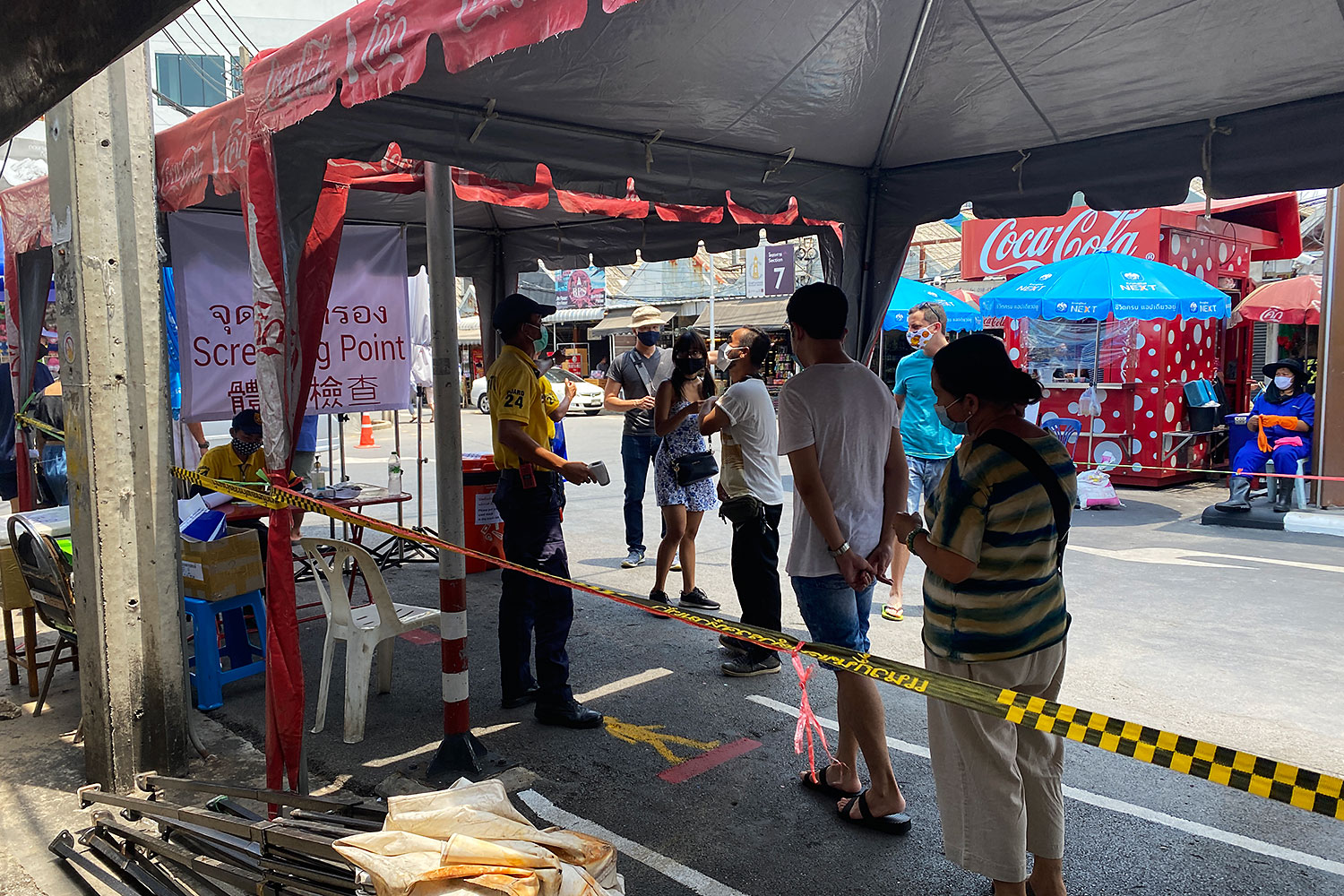 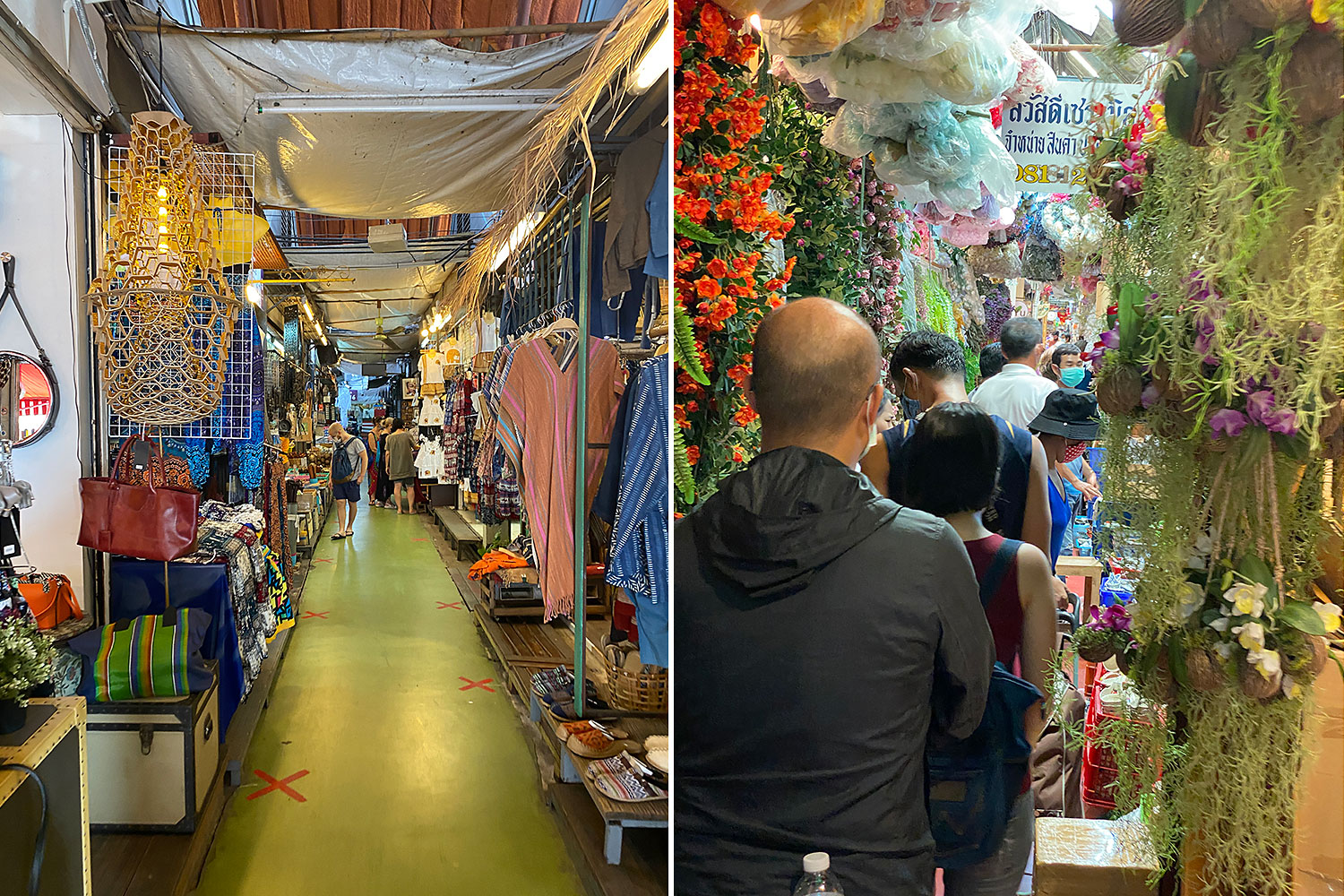 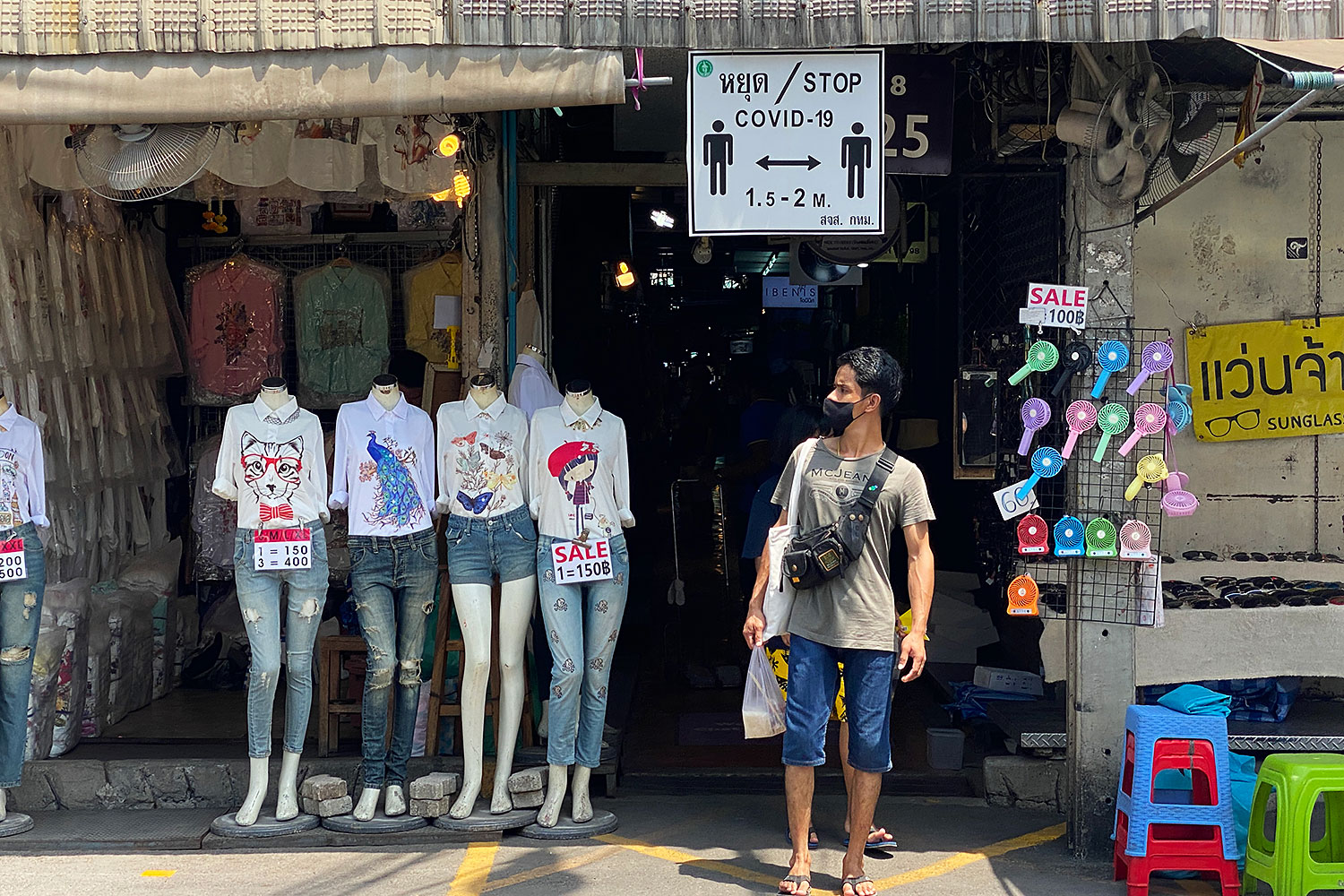 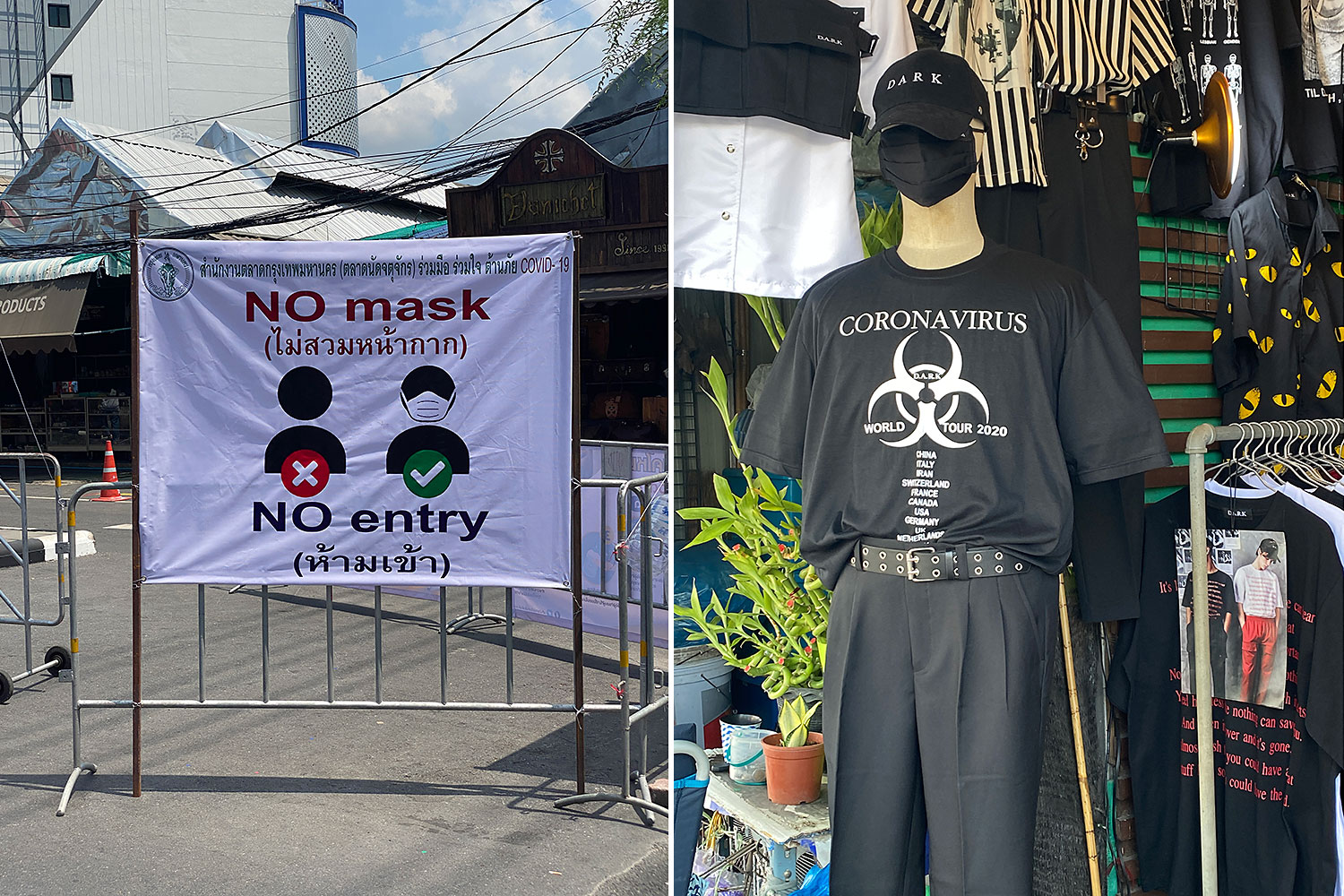 When it was announced that malls were to be reopened, I steeled myself for the possibility that stir-crazy Bangkokians would descend on the biggest malls of the city. There was definitely a crowd though thankfully it wasn't as bad as I thought it would be. Before entering, mall-goers had to check-in by scanning a QR code linked to the ThaiChana website. Ironically, this caused a crowd build-up at the entrances. Upon entering, you have your temperature checked and you get your shoes sprayed by what seems to be disinfectant. Masks, of course, are a must. At another entrance, there's a vending machine of masks just in case you need one. It was also at this entrance -- the one near the fountains that connects Paragon to Siam Center -- that staff was shepherding people and reminding them to keep their distance. It was the first time I actually saw someone implement social distancing. There was also a robot roaming around on the same floor which reportedly checked the temperature and could detect whether a person was wearing a mask.

Once people were inside, it's hard to make them keep their social distance. One of the places this was very evident is on escalators where people were still getting on as per usual without any social distancing. However, I do have to give props to the cleaning staff. As I walked around, there was always someone wiping down the escalator handle on every escalator. On the floor where restaurants can be found, a number of cleaners were diligently mopping the floors, as well. The food court has changed dramatically with tables now spread apart and labelled entrances and exits. Restaurants and fast-food chains have also spread out their tables so that only a certain amount of people can dine in. Limited people seems to be the name of the game even in retail stores where, at times, you had to wait outside for people to leave before being able to enter. At Paragon, they also make you check-in by scanning the QR code for each store you enter and leave. 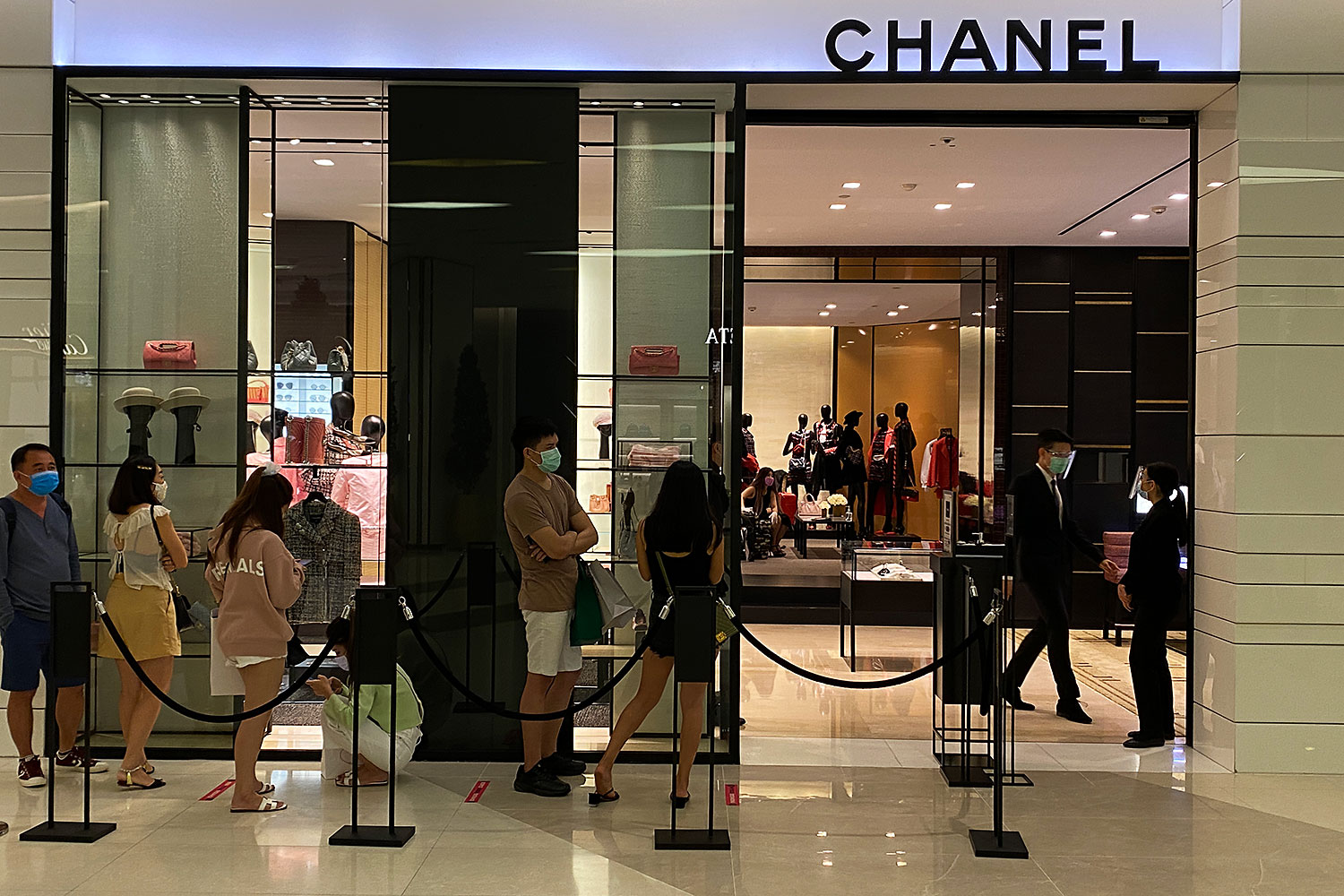 On my last stop of the exploration of Bangkok's new normal, I visited CentralWorld. Similar to Paragon, after your temperature has been checked at the entrance, you're required to use the ThaiChana QR code to check-in. However, unlike Paragon, you don't have to check-in at every shop you went to (or at least I didn't have to) but just at certain places like Gourmet Market on the top floor. CentralWorld's spaciousness definitely put me more at ease when it came to keeping my distance. This may also be why it seemed like there were only a few people here since everyone was so spread out. On a sign they have outside, they've actually calculated the appropriate number of people they can have in their mall at any given time. In terms of limiting people and from what I saw, I think it seemed to be working.

It was surprising to see that the places I expected to be open weren't open. For example, the McDonalds on the sixth floor was still closed. Despite that, a number of restaurants have opened, as well as other shops like music and gadget shops. On the first floor, they have a number of stalls from different stores selling pandemic necessities, like the B2S stall selling hand sanitisers and disinfectant, and the McJeans stall selling masks. Individual stores limit the number of customers they welcome inside and seats all around the mall are marked so that so only one person gets to sit. 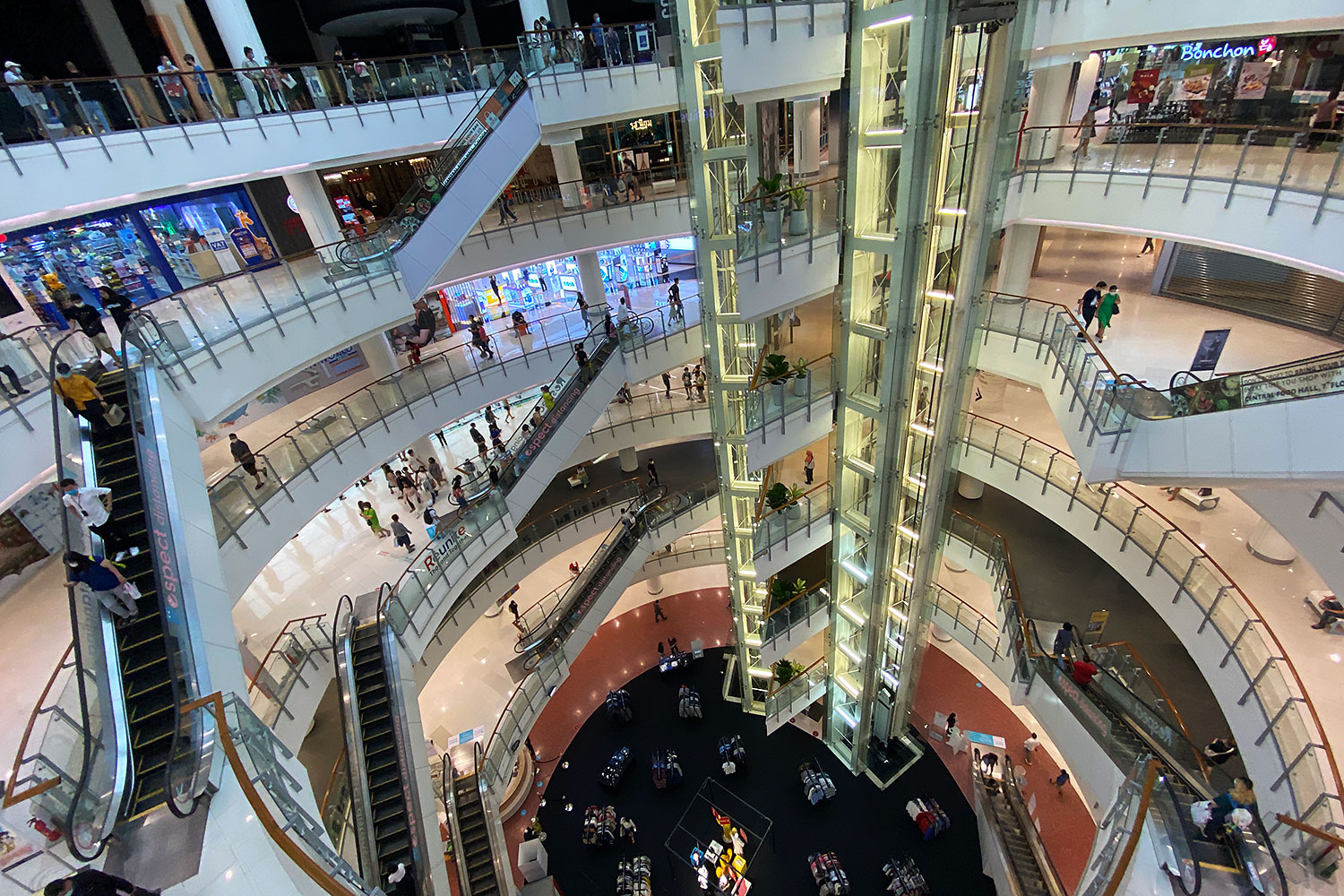 Technically, yes you can. Malls have reopened, night markets are back and parks are ready for limited activities. But this isn't a sign that the pandemic is over or that we can go back to what life was like before. One of the things I realised after having gone around the city in the last few days is that social distancing is highly encouraged but not always implemented. Though if you decide to venture out, don't let your guard down.