Sex workers bare it all

Police are cracking down on a soi in Pathum Thani renowned for its lively sex trade, after locals complained the women propositioning customers are failing to wear face masks.

Thanyaburi police have been stung into action after locals took furtive video of sex workers in soi Pansuk Loki, or the street of earthly pleasures as it is known colloquially, a well-known home to streetwalkers for 10 years or more, and complained the women were failing to take Covid-19 precautions. 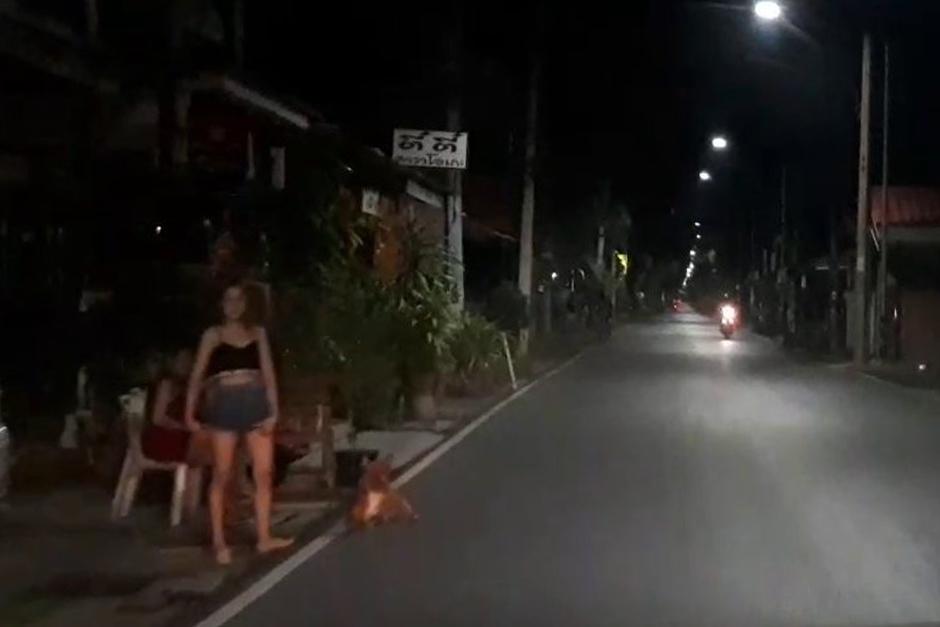 Police are cracking down on a Pathum Thani soi known for its sex trade.

Locals are accustomed to the sight of women gathered in clusters along the length of the soi, flagging over motorists and taking them to short-stay motels. The soi is at the mouth of the Tharadolvill community (Klong 7) in Lam Phak Kut sub-district of Thanyaburi.

In fact, some supportive residents have even rented out their homes to the women in the past, and say their presence adds a lively atmosphere.

However, some locals are also worried the women appear reluctant to wear face masks to guard against Covid-19, and recently took a series of clips of their nocturnal activities to the media to share their concerns. "No one has turned up to enforce the requirement to wear masks or the night-time curfew," they grumbled.

In the clips, motorists talk to the women through an open window about how much they charge, while filming the encounter on their phones. In another, a customer accompanies a young woman to a hotel where he asks about his chances of getting caught by the police. "You can play around to your heart's content -- we have cleared the matter with the police and tambon head," she tells the customer confidently.

It's that comment which set off a new spate of crackdowns in the soi, implying as it does that officialdom took bribes to look the other way.

Combined teams of up to 50 police and tambon officials descended on the soi looking for women hiding among the trees and under street lights. In mid-evening on June 14, they walked its length but found no one -- only to be upstaged by the media who visited at 1am the following day and took video footage of women standing about waiting for customers as usual.

Amarin TV spoke to one resident, Jiab, who said about 10 women a day offer sex services on the street. Once, customers visited karaoke shops in the soi and took the women working there off-premises to short-stay hotels nearby. However, when police cracked down and the shops closed, the women were forced onto the street.

"When the police come, the girls flee, but when things quieten down the girls come back again," she said.

Jiab said she sympathises with the women, many of whom choose prostitution to help support their families, including cases where their partners have abandoned them to bring up young children alone.

Other residents told Khao Sod newspaper that the women tend to be migrant workers from a neighbouring country. "I don't mind the sex trade as it makes the soi a livelier place. However, the young ones who pick them up are annoying as they drive about making noise," one local said.

"The women selling themselves are the same old faces; the guys picking them up are new and from out of the area because this place has earned its reputation from the sex trade. At the mouth of the soi is a massage parlour where some of the girls work. If the girls have someone looking after them, you find them at the parlour; those without an affiliation tend to stand under the street lights," the local added.

"In the village itself no one has complained as we know the women are just making a living. Before, some locals even rented out their places to these women as long as their paperwork was in order and they agreed not to bring customers back. Now, no one rents out their places as those women have all gone back to their home country," the resident said.

The owner of a dry goods store in the soi, Kempetch Pimchart, 49, said couples buy their alcohol and condoms from him before heading to one of two short-stay hotels nearby. He sells more alcohol than condoms but suspects many buy their condoms earlier. "Locals shouldn't be scared of women spreading the virus; they should be more scared about what the men might be carrying," he said.

Pathum Thani police commander, Pol Maj Gen Chayut Marayat, said a search by a combined team of police and tambon officials on June 14 turned up nothing. After the visit by the TV crew hours later showed the women were plying their trade as usual, he had ordered police to get tougher. The women involved could be deported as well as facing fines for soliciting, he said. If the problem carries on, he could also probe the station for bribe-taking.

Thanyaburi police chief, Pol Col Wiwat Atsawawiboon, said police are not sitting idly by. They had fined more than 10 women for soliciting since the start of the year. The hotels where they work held legal operating permits.

Police had also set up a checkpoint at the mouth of the soi, and nabbed the women in the clips sent to the media. "They deny having paid off the police or tambon or knowing anyone who has," he added. The women added they took the masks off only when talking to customers, he said.

Tambon president Pitsanu Praphathananan said claims he had been bought off harmed his reputation, and he urged the public to take them with a grain of salt.

Police are seeking a young woman who likes to stage fake suicide attempts only to collect cash from sympathetic Thais once they have managed to "talk her down" from taking her own life.

Orasa Praipreuk, 32, from Roi Et, threatened to jump from a four-storey building at Phrae technical college on Monday. She started screaming to attract attention before college staff persuaded her to come down. They gave her food and held a quick whip-around in which they raised 3,000 baht to help get her home. Staff later took her to the bus station after which she disappeared. 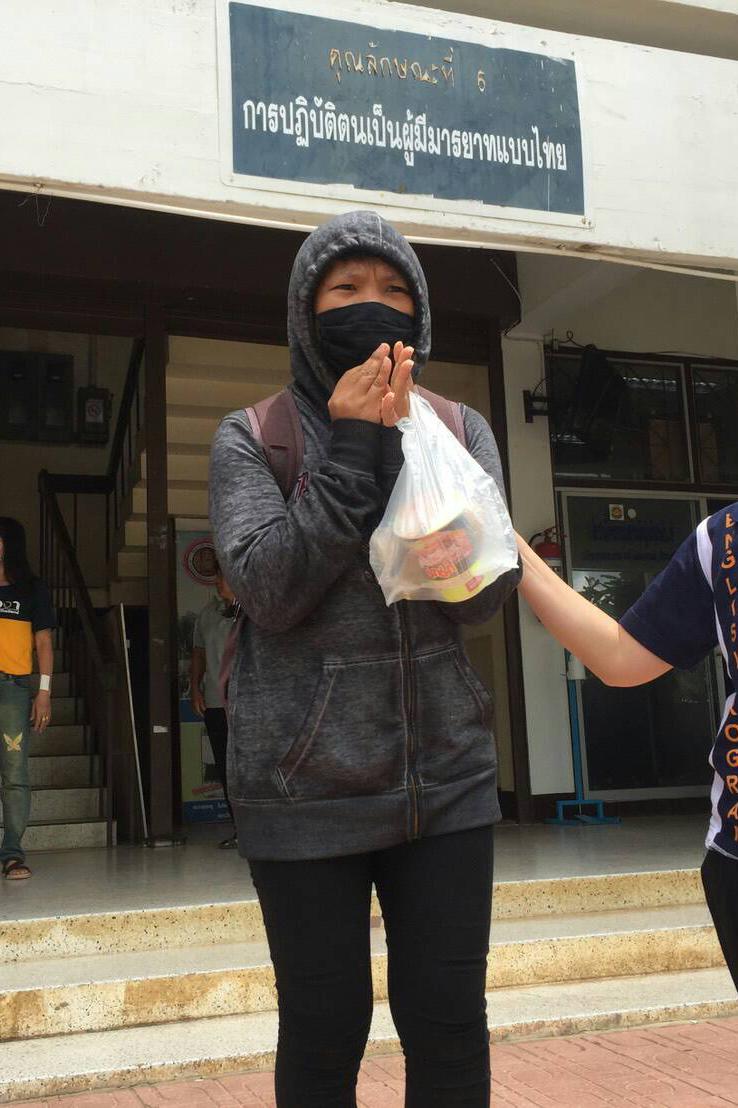 Orasa claimed her boss had dumped her at a petrol station after refusing to pay her wages, forcing her to walk into town. Despairing of her future, she decided to take her life.

College head Methinee Boonekkbus said the school later discovered Orasa had a history of staging such stunts as sympathetic Thais would inevitably give her money once she had abandoned her suicide attempt. She complained to Phrae district police, where investigator Pol Maj Wuttichai Churattanasupawan said he would seek an arrest warrant.

Early this year she threatened to plunge from a bridge in Nakhon Si Ayutthaya; on June 9, pretended to faint at a checkpoint in Chiang Mai; and on June 12, climbed a building at the province's Maejo University. The stunts are usually accompanied by media publicity but lately Orasa has taken the precaution of wearing a face mask and hoodie to disguise her identity.

Amarin TV visited the woman's home in Suwannaphum district, Roi Et, where they met her grandmother, Liang Pajjuso, 76. Ms Liang said Orasa's parents split up when she was still a child and she took over the burden of care.

Her parents sent home 10,000 baht a month for her upkeep so she did not lack for much. Despite that, she left school at the end of Grade 6 and turned into a thief, stealing five motorcycles, purloining a silo of rice, and making off with a farmer's cow which she sold for 18,000 baht, though Ms Liang caught up with her and made her give the money back.

Ms Liang said her errant grand-daughter had also turned to drugs and assaulted her when she did not get her way. She would turn up and stay for several months before taking off again. She saw her most recently before Covid-19 broke out. She has convictions for drugs, theft and embezzlement in Udon Thani, Kalasin, and Chiang Mai. "I hope when they catch up with her they throw away the key, as she is a danger to society," she said.

Siam Commercial bank has threatened legal action against customers who refuse to return cash from a malfunctioning ATM machine in Ranong which paid out 10 times the amount which customers intended to withdraw. 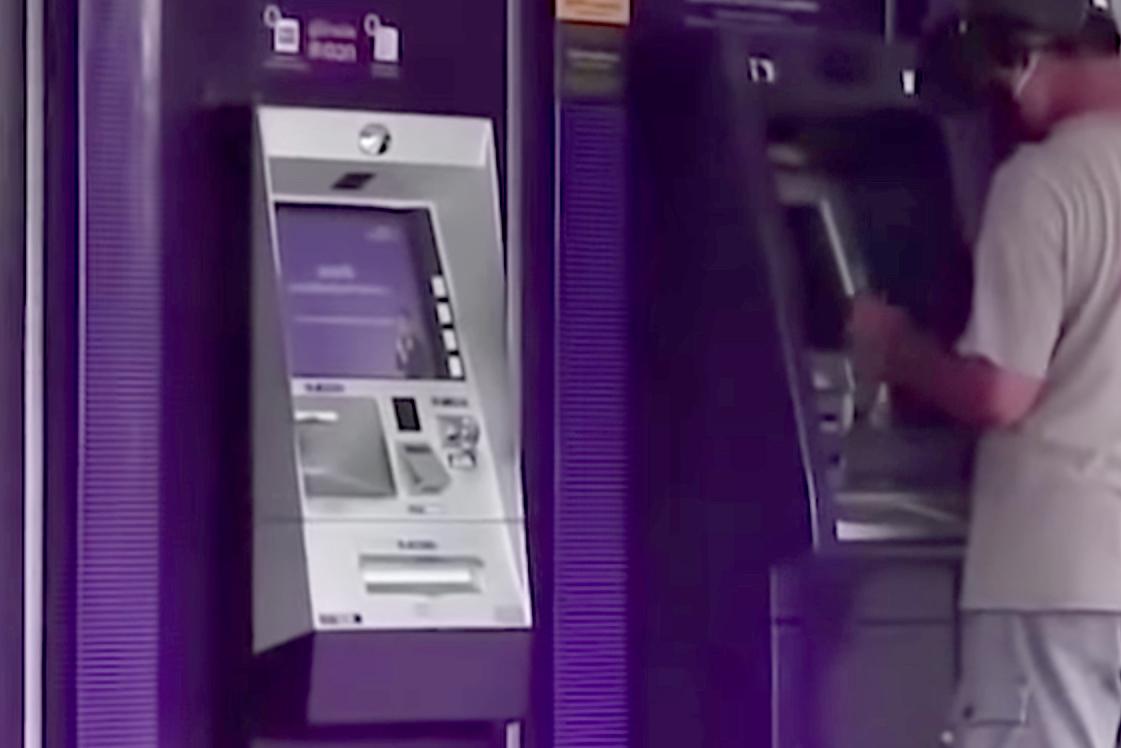 News of the malfunctioning ATM at the bank's downtown branch in Thamuang Road, Khao Niwet sub-district on June 13 led to a flood of customers hoping to try their luck including a few who, aware that CCTV cameras would be watching, disguised their identity with masks and hoods.

The ATM had been serviced earlier that day but the technician had set it to read the denomination of the bank notes incorrectly. A customer who keyed in 500 baht would end up with 5,000 baht, but his account was debited for the smaller amount.

While some well-intentioned types who discovered the flaw told waiting customers to use another machine, news of the windfall withdrawals quickly spread. "Teens turned up on their bikes with their identities disguised even after the bank put up signs saying the ATM was closed," one onlooker said. Lottery sellers also set up their wares outside the ATM booth, having heard large numbers of punters were turning up.

Customers went to police and handed over the excess amounts of cash. The night of the malfunction, four customers handed over 94,000 baht. By 1pm the next day, the total refunded had reached 109,000 baht, and the bank was still figuring out how much it had mistakenly paid out.

Ranong police gave customers until Monday to refund the excess or they would start legal action. The bank, they said, would still be able to detect if customers had taken too much cash. At press time no word was to hand as to whether everything had been repaid.

A chance to see rare textiles