Voices from the mountains

published : 6 Jul 2020 at 04:30
newspaper section: Life
writer: Supara Janchitfah
Prue Odochao continues to embrace adversity with a smile. The backdrop is some plots of fallow land. (Photo by Natchanan Klahan)

Kla Kla Chi Klu Ngu -- thus began a song once hummed joyfully by farmers as they went about slashing trees and grass to clear land. For the Pakakeryor folks, also called Karens, the sound in their language was a signal of new beginnings, of hope, of fertility. But not any more.

Now the ethnic people cannot sing while working. They have little time to finish clearing the land left fallow over the past seven years, to burn twigs, branches and leaves, as they have to plant seeds of rice and vegetables before the first drops of rain arrive. Although their practice of rotation farming has been recognised as part of Thailand's cultural heritage according to the cabinet resolution issued on Aug 3, 2010, recent spates of wildfires have triggered debates on the possible causes. Unfortunately, the Pakakeryors' centuries-old farming method has been cast as a culprit.

It took tremendous effort to clear the public's misunderstanding -- that the Pakakeryor's controlled burning of dried leaves and grass actually contributes to the regeneration of soil fertility and even helps prevent or minimise forest fires. But by the time they got a green light from the authorities, it was too late to clear the land for their own cultivation. 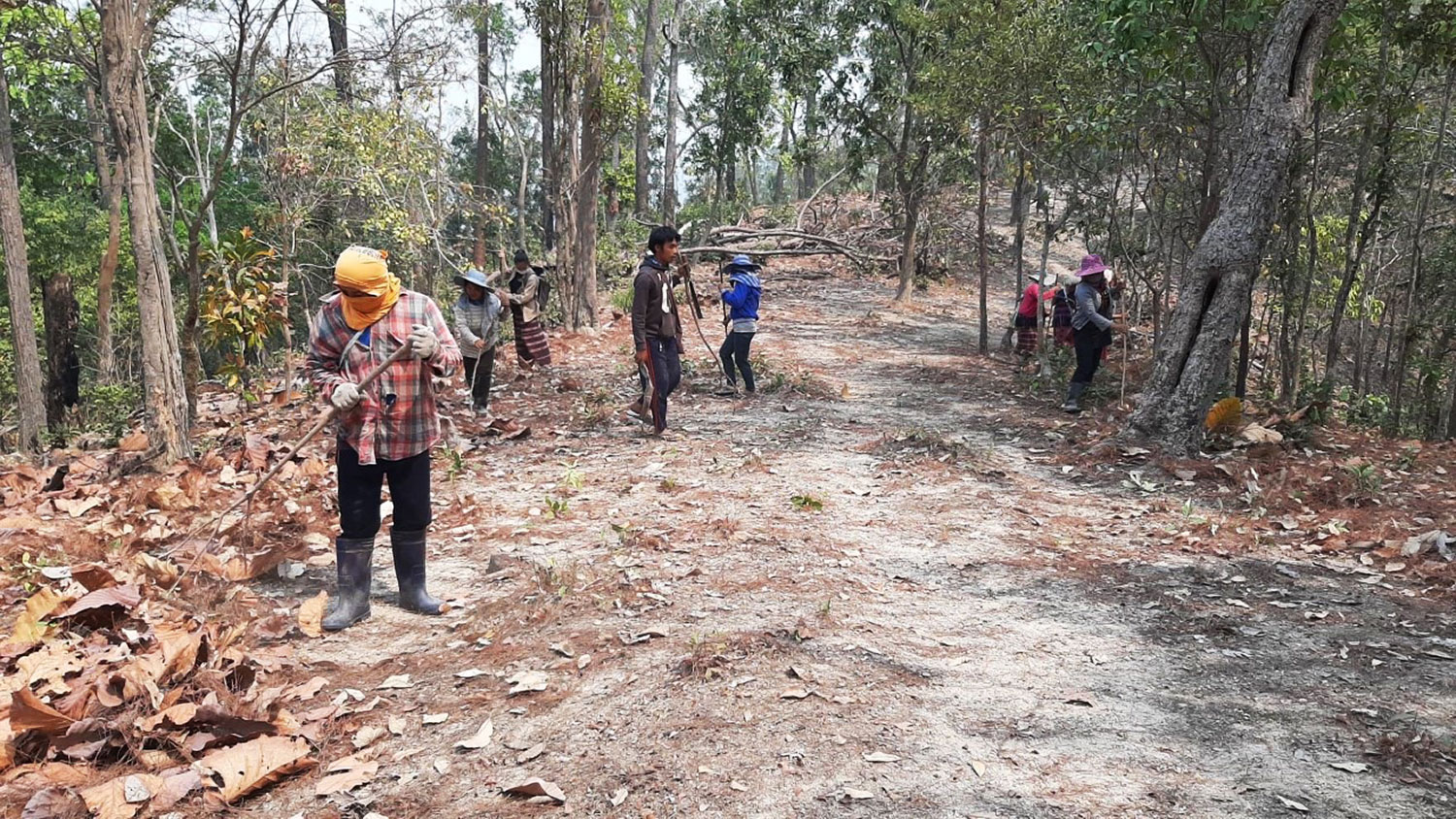 The Pakakeryor of Paka Nai village clearing leaves and installing firebreaks between a community forest and a neighbouring area. (Photo by Prue Odochao)

According to Suwichan Phatthanaphraiwan, the Kla Kla Chi Klu Ngu song was originally composed by the Pakakeryors over 100 years ago. The lyrics of Suwichan's modern adaptation reflect the highlanders' wisdom of how to live in harmony with the cycle of nature to ensure food security and sustainability.

"The world spins around itself, everything rotates, new becomes old, old is then renewed.

A university lecturer in Geo-Cultural Management and well-known singer with a handful of albums, Suwichan has been using songs as a medium to promote better understanding of his people's culture and ways of life. At Bodhivijjalaya College in Tak province, affiliated with Srinakharinwirot University where he earned his doctorate, he tries to impart knowledge as well as awareness and appreciation of their own cultural roots among students, the majority of whom come from ethnic backgrounds like himself. 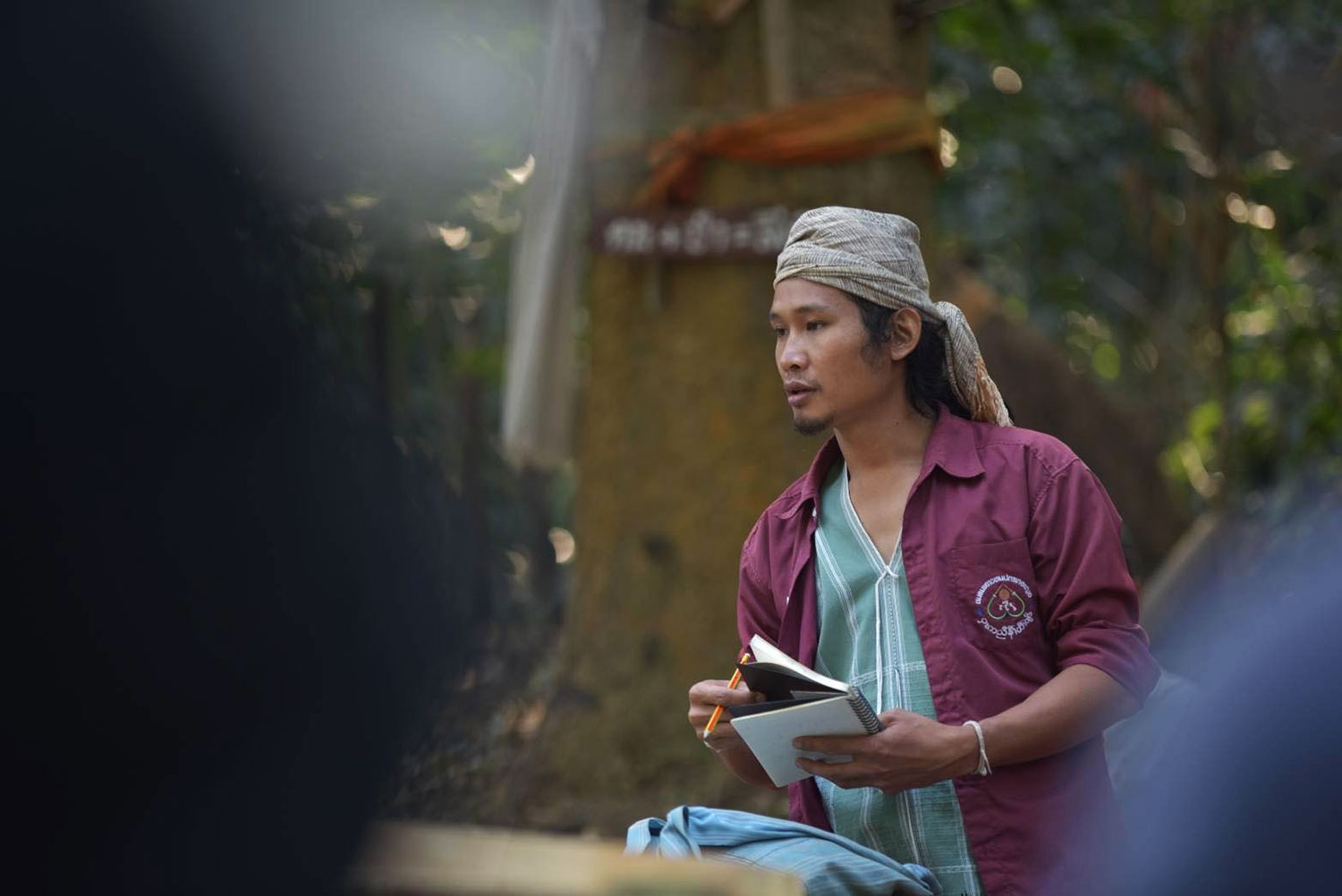 "My greatest happiness is to be able to eat the rice grown by my own rotation farming," he said.

In his free time, Suwichan composes and translate songs from the mountains into Thai. Using a wooden instrument called "Tenaku", he sings in the Pakakeryor language while his wife sings in Thai. Most of his songs reveal the close-to-nature rhythms of life cherished by the Pakakeryor. He insists he will continue to sing and spread the message even if he has "only one listener".

The Pakakeryor's lives revolve around nature. For them, mother nature unconditionally bestows sustenance, healing power and inspiration. A graduate from Chiang Rai Rajabhat University, Bancha Muhae initially earned a living from playing Tenaku and singing. Living in the crowded and crammed city, he subsequently fell ill. It was only when he decided to return to his home village of Pa Pae in Lamphun province did the clean fresh air and greenery there restore his health.

Like Suwichan, Bancha has been drawn to the charms of Tenaku from a young age. He once made his own instrument from a dead tree stump, trying to conserve natural resources as much as possible. From time to time, Bancha composes and sings songs that serve as a bridge between his people and the outside world. And that is only part of the young man's mission. 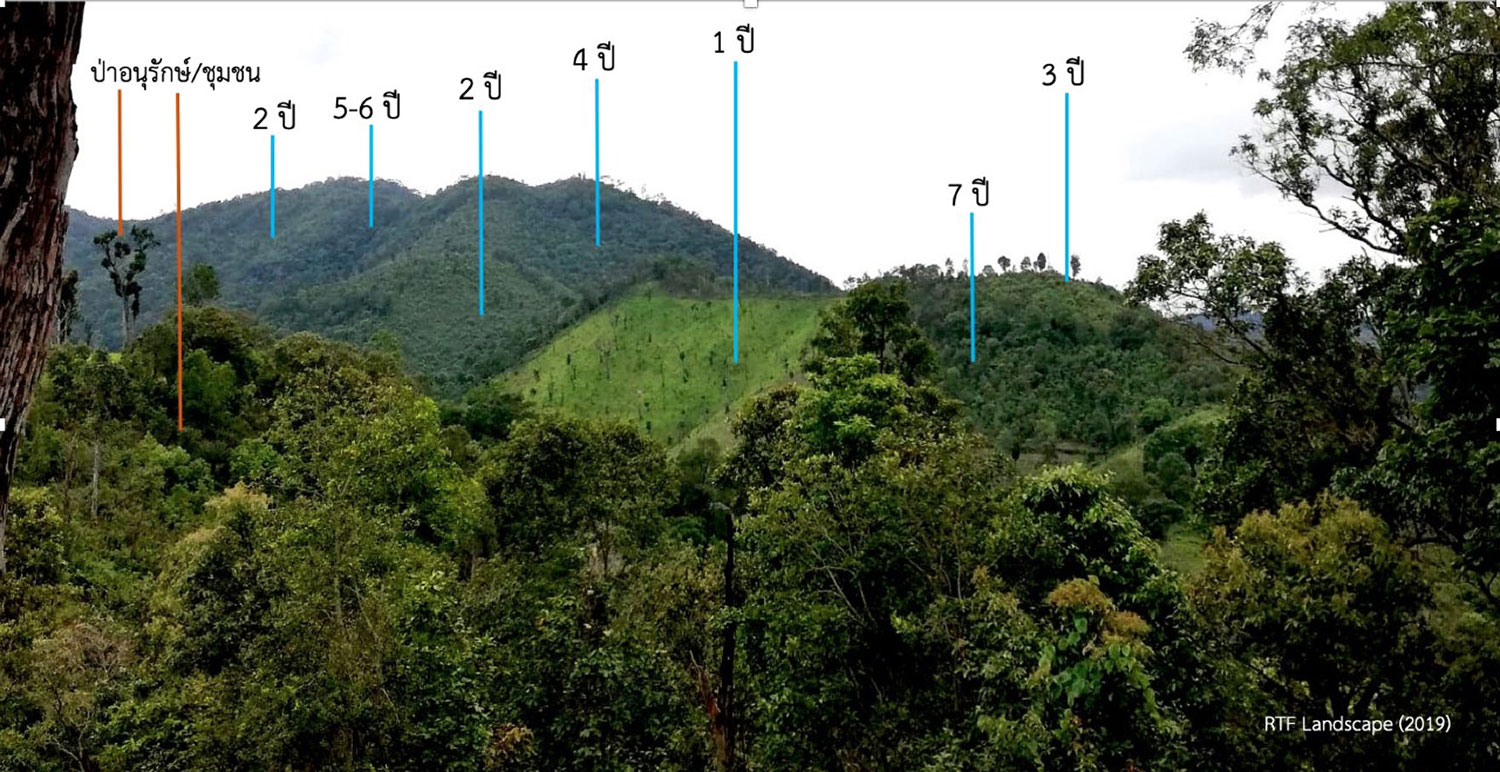 This aerial picture shows the rotation farming in different years; by year 7 the forest has been re-established. (Photo by Thanagorn Atpradit)

Thanks to his past experiences organising a local youth group, Bancha has been to mobilise a number of young and old volunteers to help in various initiatives. The Pa Pae volunteers dedicate their time and limited resources to monitor the surrounding forest, set up firebreaks and put out fires. With little help from the government and non-governmental organisations, Bancha raised funds through social media by selling locally grown coffee beans sought after for the naturally sweet aroma due to the abundance of wildflowers and bees. With free labour from the volunteers, they managed to install empty 200-litre barrels throughout the hills.

"We installed the red barrels uphill to store rainwater which can be used to mitigate forest fires. The blue barrels cost more and are for local people to drink when working in the fields," Bancha noted.

Among the academics working on forest issues in northern Thailand, the 21,034 rai community forest of Pa Pae has been praised as an outstanding model of good forestry management by the grassroots. Ironically, many of the Pakakeryor folks have been deprived of land rights since the lands they used to work and left fallow have been mistakenly considered as part of national parks, so Bancha and his volunteers still have a long battle ahead of them.

Prue Odochao does not sing, but equipped with a mobile phone, he has become a well-known "social media reporter" whose "live reportages" from the fields have earned a sizeable following in the Facebook world. The native son of Nong Tao village in Mae Nawang in Chiang Mai, Prue carries on in the footsteps of his father Joni Odochao, respected as "a local wise man" who was once appointed to the National Economic and Social Development Board.

Through his deep insight into the realities faced by ethnic folks, Prue tirelessly educates the mainstream Thai audience on various issues, from the Pakakeryor's unique knowledge in rotation farming and controlling of wildfires to how to grow a variety of seeds on a small piece of land that can sustain a whole family. But even when he discusses serious issues, Prue continues to exude his trademark composure and sense of humour befitting a man who has seen it all. 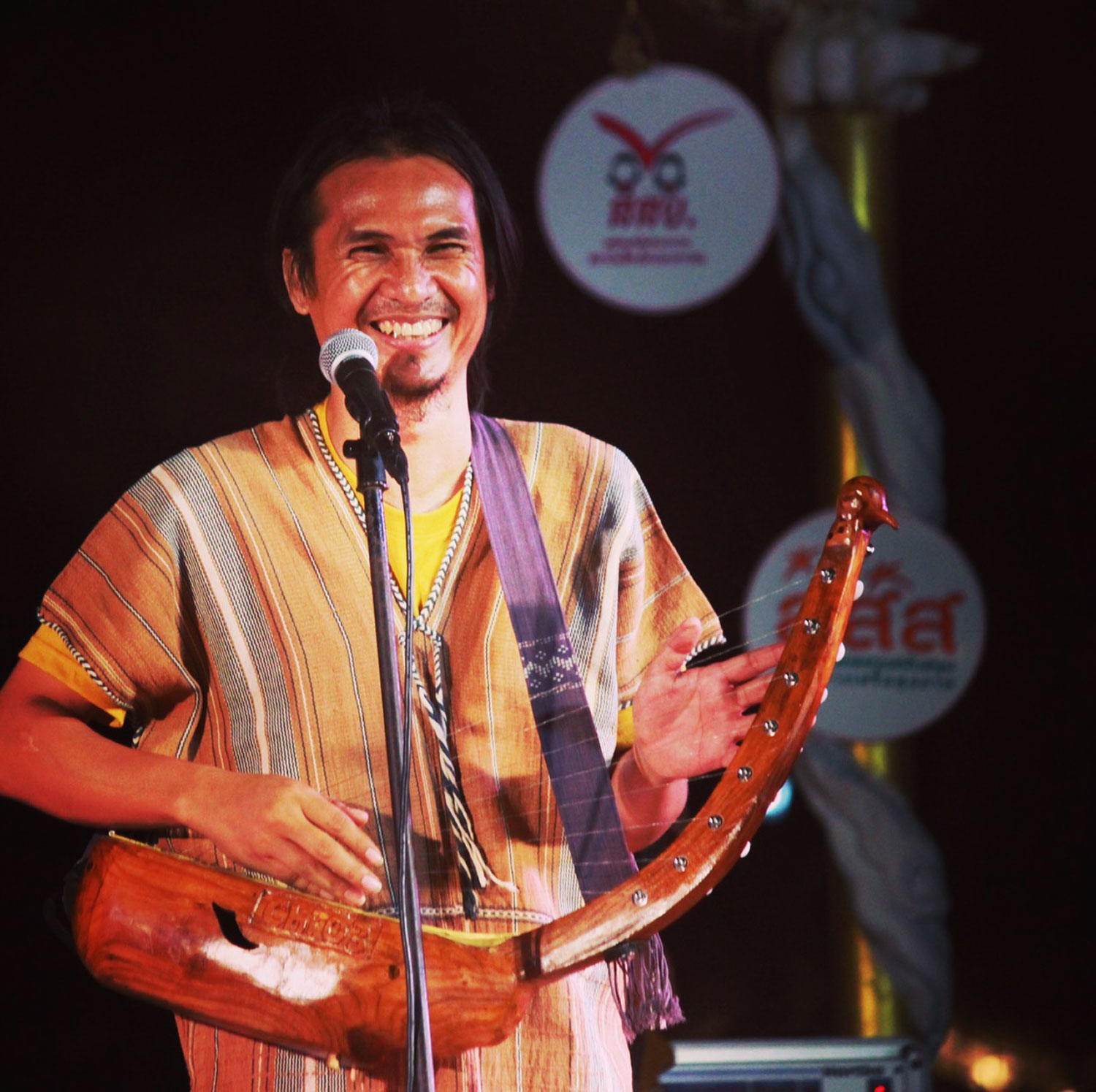 For years, Suwichan has composed and sang songs from the mountains as a bridge to create a better understanding between the Pakakeryor and mainstream Thai society. (Photo by Saw Doo Plot)

Now living with his wife's family in Paka Nai village in Samoeng district of Chiang Mai, Prue shares the fate of his fellow Pakakeryor folks whose land rights have been embroiled in a dispute with the forestry authorities. Similar to Bancha's village, the boundaries of the national parks overlap parts of the community's farming areas. Also, Prue and his fellows have set up their own team of surveillance and firefighting volunteers who regularly maintain and reinforce an impressive 165km ring of firebreaks originally put up by their local elders, that runs from Mae Khan to Mae Nawang watersheds. Unfortunately, between March and early May of this year, nine volunteers were killed trying to put out the fires. "They are the real unsung heroes," he lamented.

Prue's outspokenness and wise words makes him a good candidate to represent the land rights issues on behalf of his rural folks. He has been politically active from a young age. In 1997, Prue joined the 99-day marathon protest in front of the Government House with the Assembly of the Poor and a few years later staged a walkathon from Chiang Mai to Bangkok, accompanied by a handful of his ethnic peers.

In the process, his understanding of the structural inequalities faced by his ethnic communities has grown by leaps and bounds. He thanks his wife and children for behind-the-scene support which has allowed him to do this public service work, some of which he pays for out of his own pocket.

"I am fighting in order to live in the forest with harmony; my goal is less to win than to generate better understanding among different sectors in Thai society," Prue said.

After a forest fire, one sometimes spots newborn mushrooms. The three young men are like different mushrooms born out of the same ravaging fire. But with resilience and dedication, they continue to help their people to gain access to food security, conserve a diversity of seeds and grains, maintain their culture and better mutual understanding.