A good variety of foreign dishes have been available in Thailand for a long time.

But it seems that Hainanese chicken rice (khao man gai) is an unrivalled all-time favourite among Thai people. This dish has created jobs and income for so many people. Its popularity is so overwhelming that khao man gai shops are everywhere, with the authentic offering prepared by Hainanese chefs being perceived as the best.

Hainan Island is well known for its chickens especially in Haikou province, situated on the northern tip of the island. The nearby Wengchang district is acclaimed for its native breed commonly reared in every household. The medium-frame bird is known for its tender and savoury meat, with yellowish thick, soft skin. The birds were allowed to graze freely, feeding on figs that are abundant in the area. It is believed that figs enhance the flavour of Wengchang chicken. 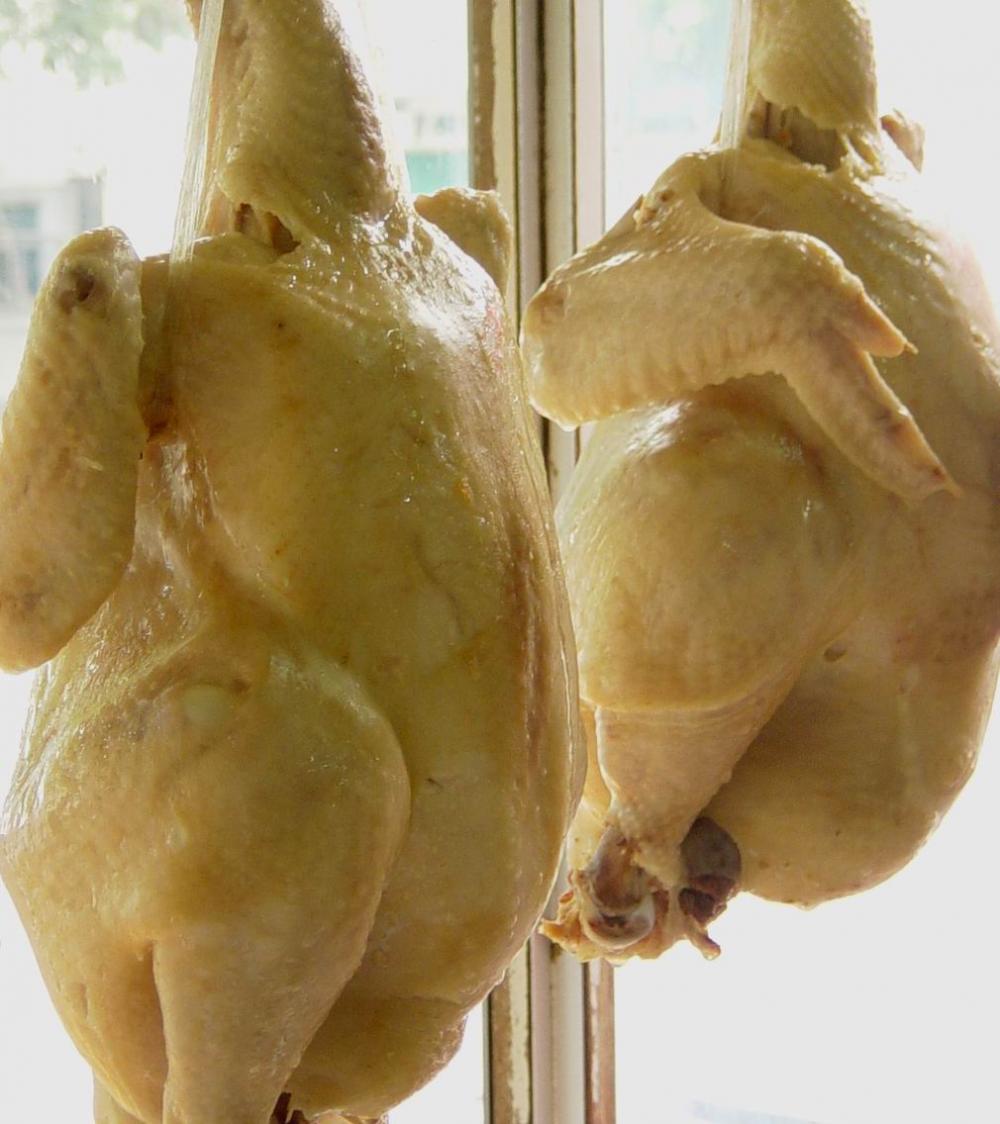 Besides their Chinese compatriots, when the Hainanese immigrants in Thailand travel to the island to visit their relatives, they often buy Wengchang chicken as a gift for their families back home. 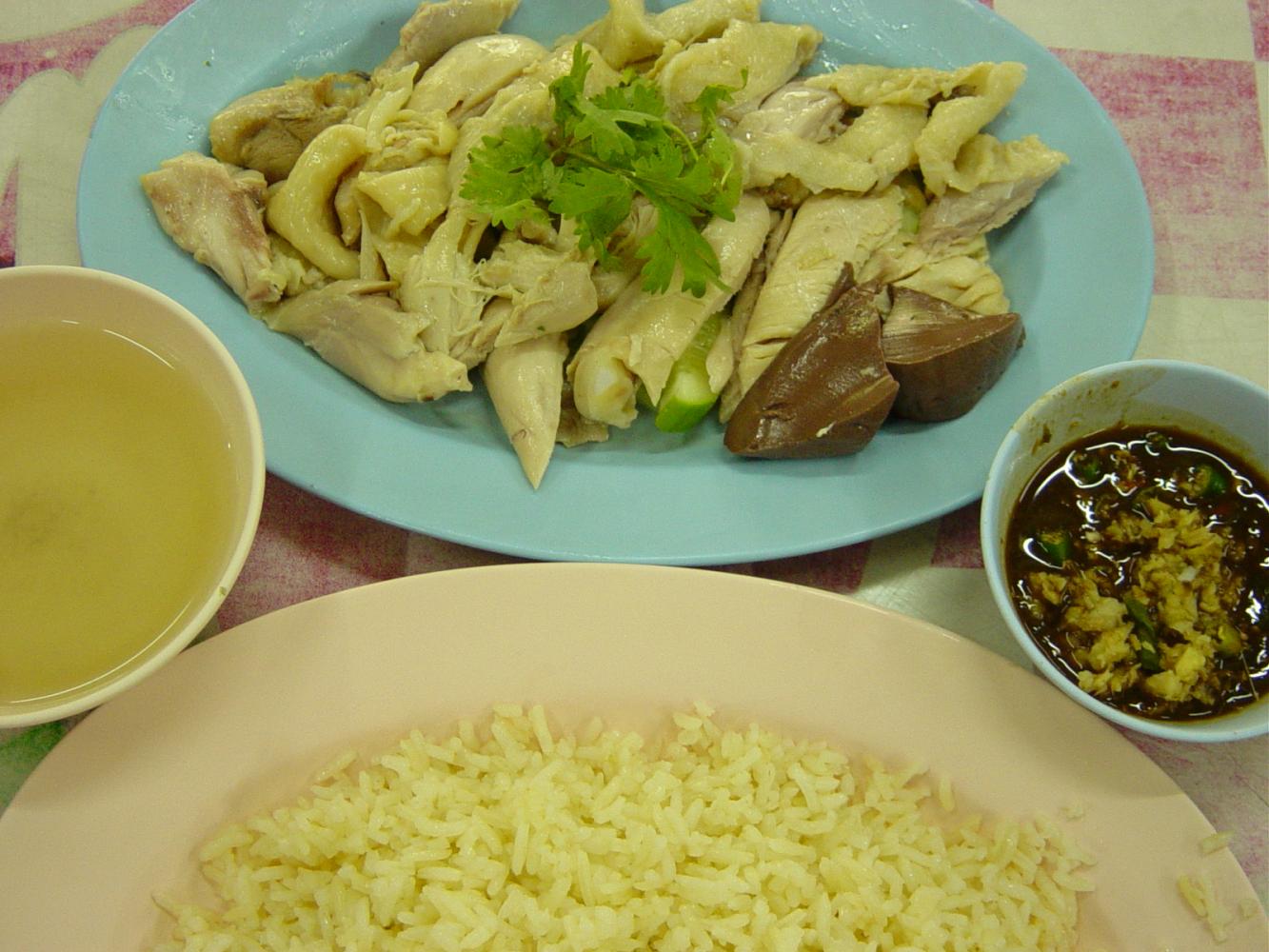 In the past, when the Hainanese in Thailand prepared chicken to pay homage to their ancestors for Chinese New Year, they found that Thai native poultry was far from ideal and thus explored solutions to improve taste and flesh quality. They tried out the caponised technique on male birds by incising the last two rips at the hip and removing the testicles. Caponising was carried out by a highly skilled practitioner who made a living by performing surgical operations on chickens raised by Hainanese farmers.

Back then, Hainanese households had rather limited space but managed to keep 50-60 birds. 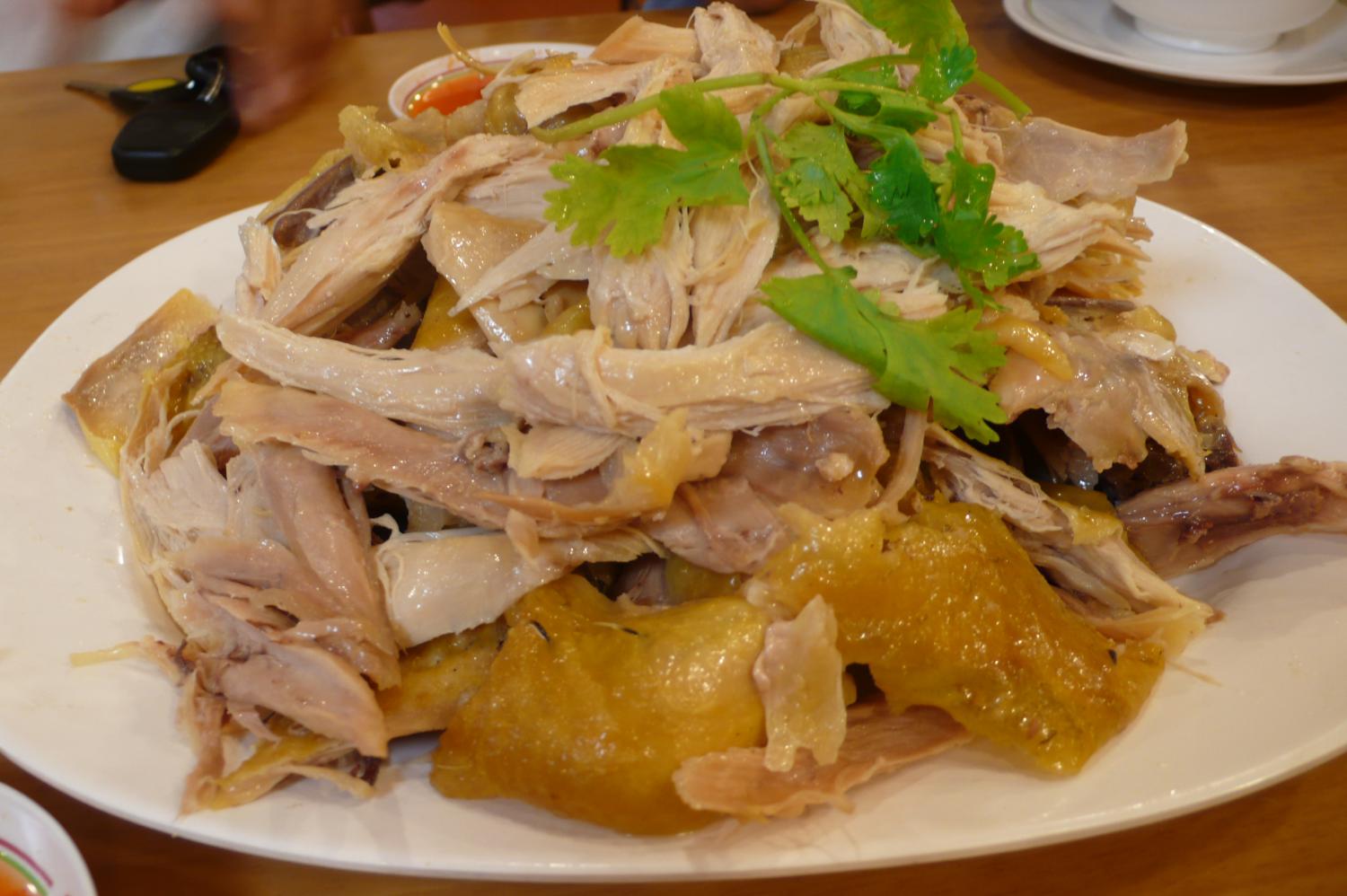 Poached chicken in a Chinese restaurant.

Birds were reared densely in narrow cages stacked like a condominium, in which they had space barely enough for standing. Overly fed in cramped conditions, the birds got very fat and were slaughtered at the arrival of Chinese New Year. Customers who bought boiled capon chicken also received broth to be used for making khao man, which is prepared by stir-frying raw rice with pounded garlic before cooking in the broth.

Surgical caponising became outdated as it took a long time to perform and involved a risk to the rooster's life. A safer method was carried out by implanting an artificial sex hormone under the wings of the birds. The incised wound heals quickly. The hormone-embedded birds achieved similar quality comparable to the surgically castrated birds. The production costs were cheaper and the birds could be raised in spacious housing.

It was later found that the chemical hormone had an effect on consumers' hormonal balance. 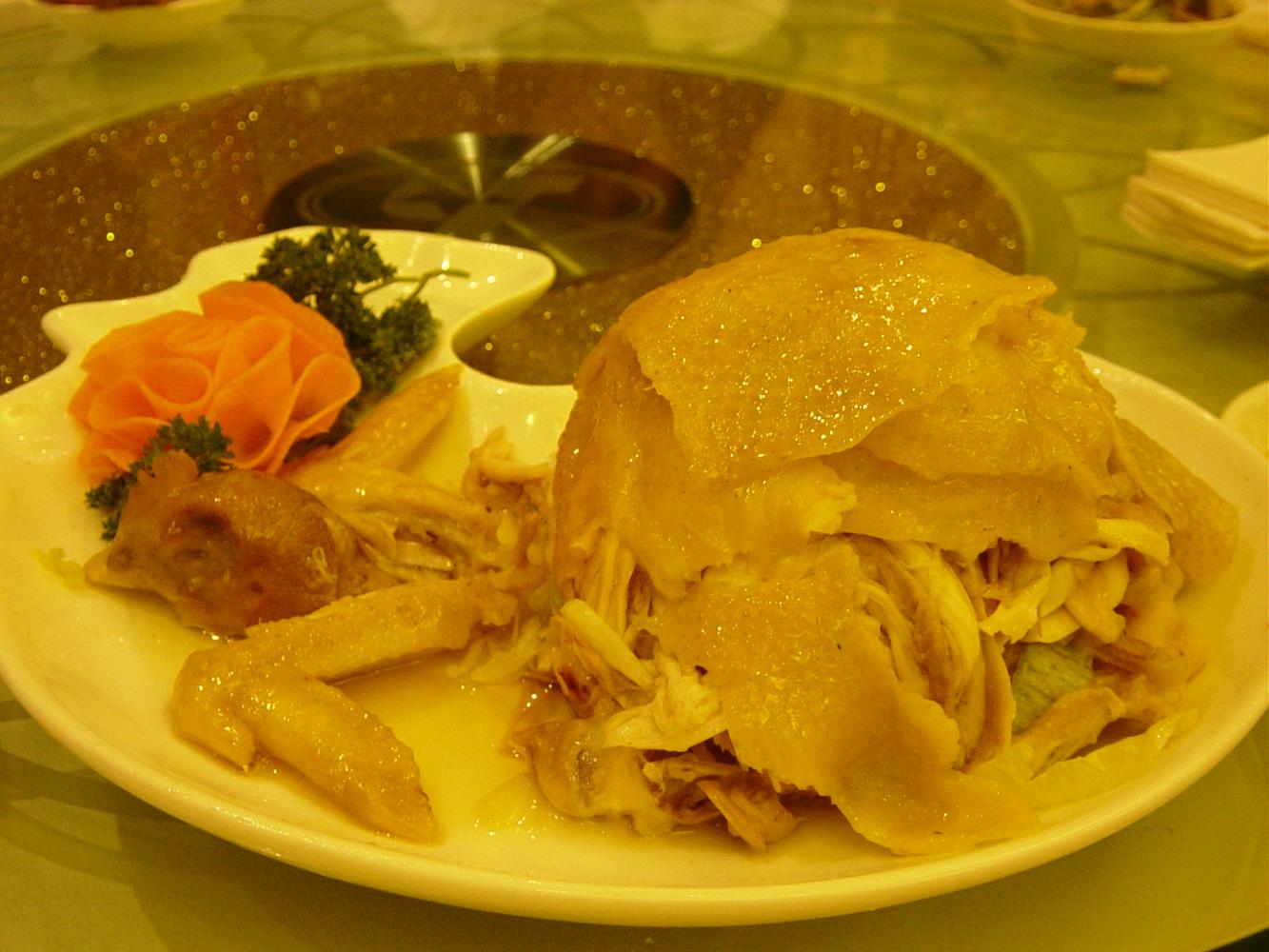 As a consequence, Hainanese chicken hawkers are mushrooming everywhere and the dish is available 24/7, a stark contrast to what happened in the past.

In those days, preparing Hainanese chicken rice began very early in the morning. The birds were killed at around 2am and poached. The broth was then used to cook khao man. Preparation would wrap up around 5am in time for the shops to be ready to serve. 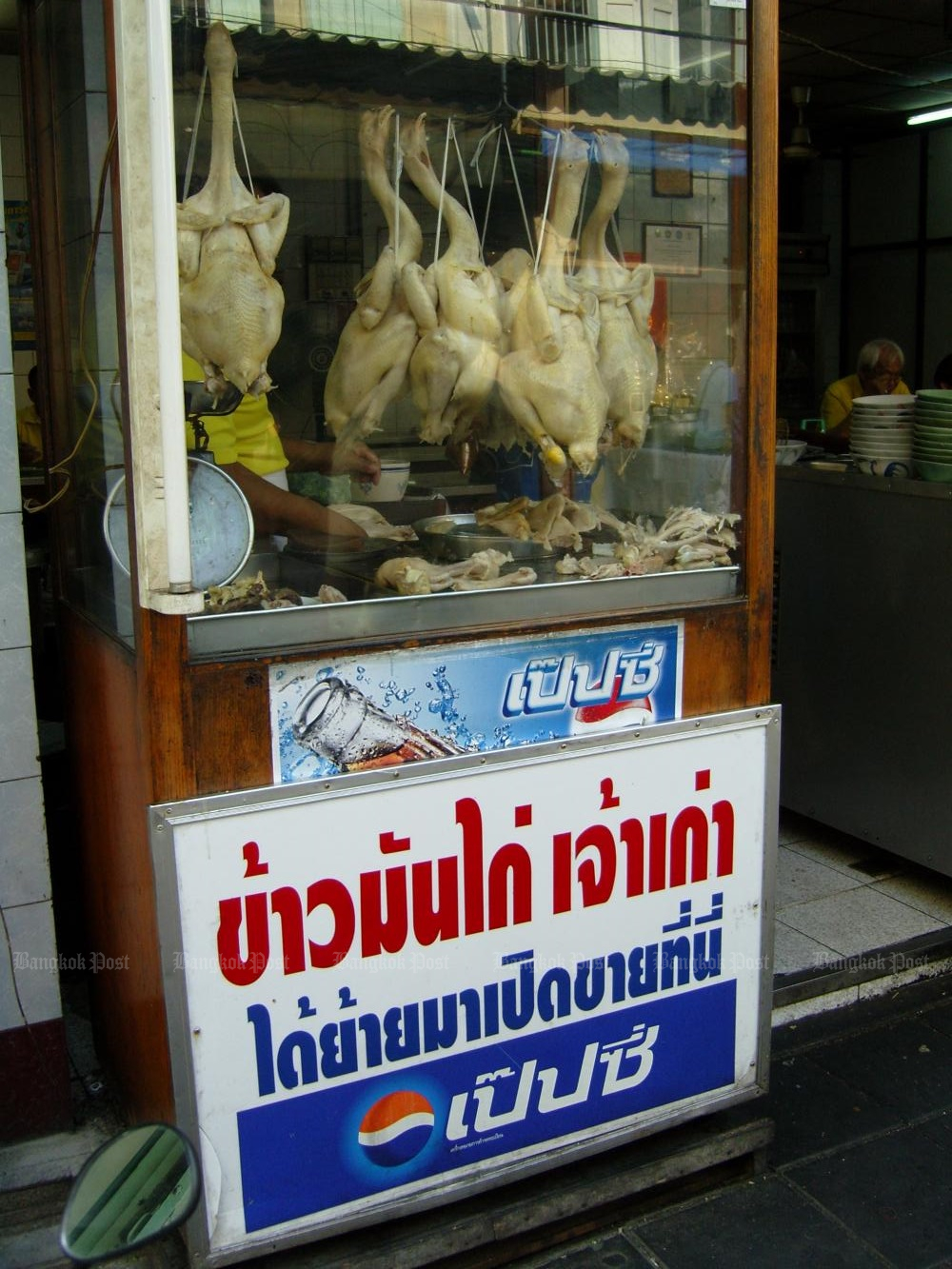 Excellent Hainanese chicken rice should have four qualities: the chicken is poached properly; khao man is aromatic and slightly salty; the dipping sauce has an intense flavour obtained from a balanced mixing of salted soybean, ginger, fermented bean sauce, and chopped chilli; and a delicious clear chicken soup prepared from chicken carcasses and gourd. The shops that run a good business have the advantage of having many carcasses to be put in the soup, making it tastier. Authentic Hainanese restaurants can be easily spotted by the pile of chicken bones in a cabinet at the front of the shop.

Hainanese chicken rice used to be served only in the morning as people liked to eat khao man gai before work. Now we can have it around the clock.