To catch an online predator

Sending a half-naked photo of herself to her new Facebook admirer, a boy she thought was 15, felt like a flirtatious move that 14-year-old Ned* believed would show she was serious about having a romantic relationship with the handsome teen whose photoshopped profile photo made him out to be a stud.

Little did she realise that pressing the send button would lead to serious consequences because the young man who she believed she had fallen in love with was an online child predator looking to con young women into sending intimate photos in the guise of a blossoming romance.

The next day, her suggestive photo was shared in a private Line group for paedophiles and just about anybody else interested in looking at lewd photos of young girls.

The incident drove her into a state of depression, which was further exacerbated by the stress of having to keep up with her school lessons via remote learning at the height of Covid-19.

She was overwhelmed with a sense of dread and the thought that such private photos were now being made public. The thought of the photos remaining on the internet until she was old and grey only added to her misery and predicament over how she would deal with the consequences of her actions.

Ned's encounter with online child predators amid the Covid-19 pandemic has been shared by numerous other youngsters in the last three months, according to a recent report by the Thailand Internet Crimes Against Children Taskforce (TICAC), which launched a nationwide cyber sting operation targeting online predators with support from local and international law enforcement agencies and NGOs.

What was uncovered during the investigation was troubling, to say the least. For one, the global pandemic has done little to deter perpetrators from the online exploitation of countless children who are at home during Covid-19, putting them at higher risk of online criminal activity as they spent more time online.

Over the past two months, the TICAC has rescued over 100 children from online cybersex predators, a considerable spike when compared to the total of 53 underage victims that the TICAC rescued from online sexual abuse in the whole of 2018, which at that time was the highest annual figure since the organisation was created in 2016.

Since the middle of April this year alone, officials have seized more than 150,000 files of underage pornographic and abuse materials.

In an exclusive interview with Life, Pol Lt Gen Jaruvat Vaisaya, assistant police commissioner-general, and TICAC leader said conducting a sting operation of such a nature during Covid-19 had its set of complications due to curfew, social distancing, and self-quarantine requirements, but that overall the sting operation has been a success.

Sharing their findings, he continued: "What we discovered was that during the work from home period, there was an increase in internet usage in several households. Concurrently, lax adult supervision left a loophole for online cybersex predators, most of whom are already on the prowl to abuse children. This led to predators using all sorts of child grooming tactics to lure children after a level of trust has been formed.

"In terms of technology, we found that perpetrators used state-of-the-art gadgets, which made our work all the more challenging when it came to the gathering of evidence. 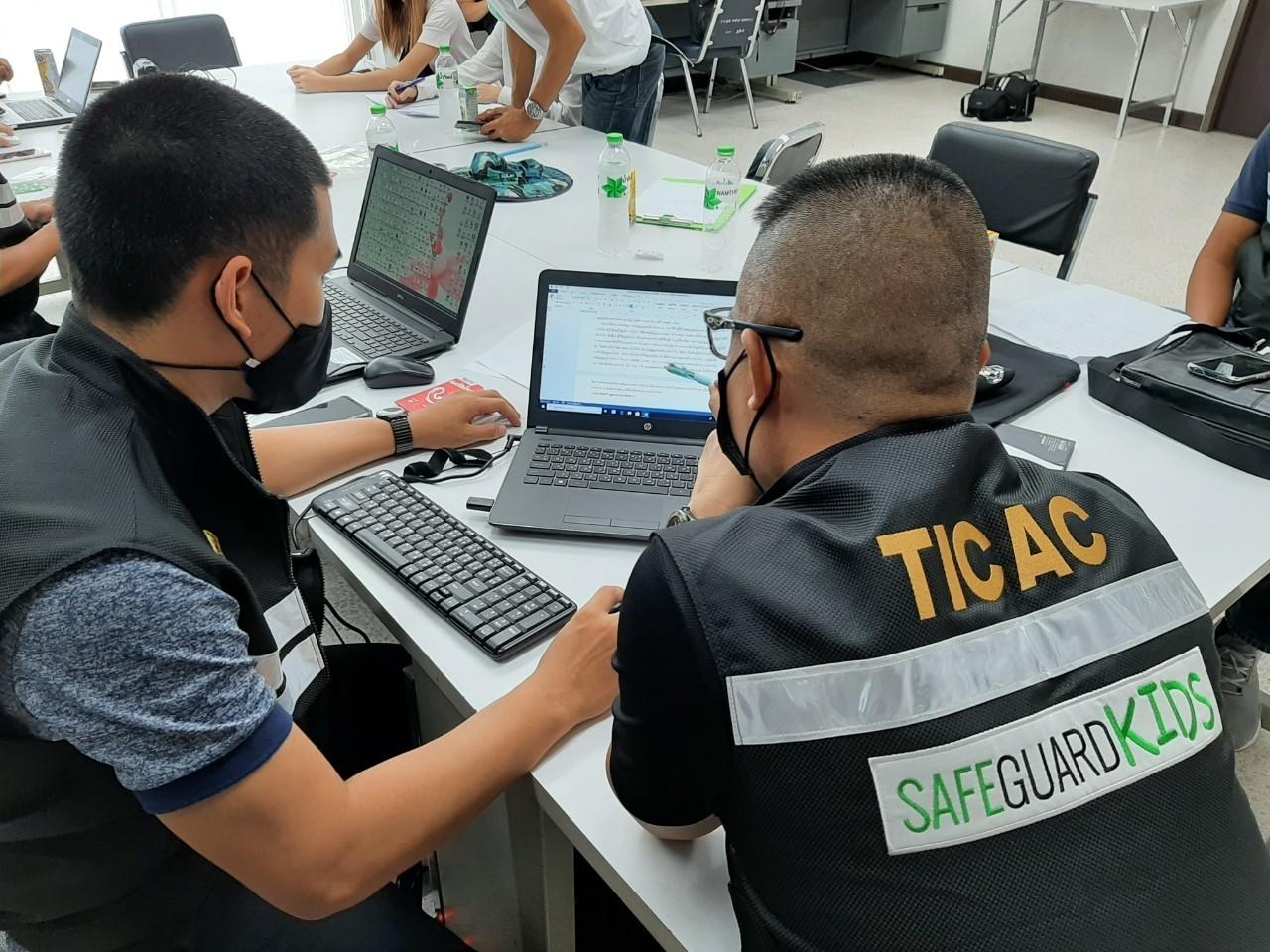 "The widespread availability and affordability of high-speed internet and the rise in mobile phone ownership among young people has made the situation even more precarious during Covid-19.

"In terms of tips received on our TICAC and Facebook platforms, we used to average approximately 120,000 each year in the past, however, during the height of Covid-19, which lasted for three months, we received a whopping 160,000 tips in that timeframe alone."

Jaruvat further remarked that in the nearly five years since TICAC has been active, the youngest-ever victim found was four years old. Most of the minors come from dysfunctional and poor backgrounds. "Predators often prey on children who are the most vulnerable. We also found that many among them suffer from depression. With the internet being readily accessible, these children are often the first to get lured by predators.

"Knowing well that children aren't going to school, predators are taking advantage of this and looking to earn income by exploiting them for their gain. Many of the business dealings they have with potential clients also transpire over the internet, so time is of the essence in our line of work."

Jaruvat said this particular sting operation highlighted the importance of information gathering by the public who sent them tips and clues to catch cybersex predators and people who use the internet to exploit children.

The senior officer remarked that the need for information plays a pivotal role in capturing criminals red-handed. However, the information they receive is often incomplete, so officers have to spend a substantial amount of time searching for these missing links. Needless to say, this is a time-consuming task, he said, and as TICAC has a limited number of officers and rising caseload, this can become an obstacle to getting to the victims in time.

"While we are grateful for the tips sent to us, I would request people to find as much information as they can gather about the alleged crime. Some questions to keep in mind are: What happened? Where did the crime occur, when did it take place, and who is the victim?

"If we can receive as many clues to the aforementioned questions, our investigation can move much faster so the perpetrator(s) can be caught before they can get to more children.''

A non-government organisation that has worked closely with TICAC and was a part of their recent sting operation is The Hug Project, a charity that assists trafficked children and has advocated the need for the government to provide better care and education to young people using the internet in schools and at home.

Reflecting on the cases, Wirawan Mosby, director of The Hug Project remarked:

"Another disturbing case that we received was about a baby being raped. I always think the worst in such cases and have nightmares about how the baby was murdered by the abuser.

"What makes this emotionally unsettling is the fact we do not know who the baby was. We can only locate the person who posted the video but not the source of the video, which could have been produced outside of Thailand."

Speaking on how Thai society, law enforcement, and how the government has played an integral role in addressing the issue of child grooming, Wirawan said: "I believe that the government is doing a good job by having established TICAC because children now have access to law enforcement who specialise in these types of crimes by utilising the child victim-centric approach.

"Local police still have limited ability to handle these types of cases since they have less access to data and resources.

"TICAC has already worked tirelessly on assisting a number of these victims but the high volume of cases makes it quite challenging and numbers seem to be increasing."

Currently, TICAC is working in partnership with seven NGOs throughout Thailand. TICAC and the Child Advocacy Center, including The Hug Project, work especially close to protect children.

Wirawan said that while outside factors related to online cybersex exploitation of minors include widespread availability and affordability of high-speed internet and rise in mobile phone ownership, predators target young children online, specifically teenagers, because they are at an age where they are curious.

She added: "Despite knowing the dangers that lurk, teenagers allow their curiosity to get the better of them. Still, we believe prevention is key. The sad part is that many children are groomed and tricked online since predators use the child's vulnerability and romantic fantasy to get them to do what they want."

Having worked closely with child victims and their families through the years, Wirawan shared a few suggestions on how parents and guardians of underage children can keep their loved ones safe from the prying eyes of predators.

"Parents should do their best to educate themselves and their children on the issues that arise due to this. Predators' strategies are always changing so we should follow the news to learn about those new strategies. Parents should also check their children's devices regularly to see if there are any strangers or people who they have not met in person that has tried to communicate with them on social media," she said.

"Children should also be educated about safe touch, unsafe touch, and confusing touch. If any adult touches the child and makes them feel uncomfortable, they should be empowered to say "no" without being regarded as rude.

"At a systematic level, the Ministry of Education should enforce child protection policies and internet safety protocols throughout Thailand."