The reverent relationship of man and beast
Life
Social & Lifestyle

The reverent relationship of man and beast

In a bygone era, peasant farmers and their buffaloes tilled the fields and fed the world

In the old days, farmers considered buffaloes their best friends and they were deeply bonded. The animals were not just powerful, but were also very reliable helpers in rice fields. Nowadays, we rarely see the beasts working in the fields because they have been replaced by machines.

Peasants in the Central Plains were tightly connected to their buffaloes due to environmental and natural factors. Regretfully, the virtue of the peasants and their mighty yet obedient beasts belong to a bygone era.

Years ago, there were neither irrigation systems nor water gates to break the runoffs from rivers during rainy season. Rainwater flooded the fields, making the condition favourable to rice farming, the main occupation of people living in the region.

A cycle starts at the end of summer when farmers start tilling the ground. They would set off from their homes with buffaloes and start working before dawn. A plough is tied over the buffalo's shoulder and the beast drags it through the hard soil while its owner follows closely behind. When the Sun gets high, both farmer and buffalo take a break. The farmer eats the breakfast his wife had delivered to him while the buffaloes are released to feed themselves with weeds and grass. The chore restarts in the afternoon for a short period. Then the buffaloes are released again for resting and feeding.

In late afternoon, the owner herds the buffaloes back home to let them wallow in the swamp in front of the house. Some farmers even bath the ruminants before putting them in the pen under the house, pilled with freshly cut grass. The surrounding area is kept clean. Leaves and trash are burned to thwart mosquitos from disturbing the animals. More importantly, the smoke that seeps through the space between floor planks helps deter the insects from entering the house at night.

At the onset of monsoon season, water runoff fills the rice fields. The peasants together with their beasts continue their work in the field doing the second tillage to make the soil friable and smooth, ready for sowing rice seeds. During breakfast and lunch breaks, buffaloes are released to munch the grass. Most often, the animals take to mud bathing to keep their bodies cool.

The same routine is followed in the evening. The farmer herds his buffaloes back home; lets them soak and wash in the canal before entering the pen; and burns the weeds and wood to create a smoke to drive the insects away.

Prior to the peak of rainy season, the pen is relocated to higher ground to avoid being flooded. Buffaloes are kept in the pen and eat straw their owner provides.

When water slowly floods rice fields, the Kor Khor rice adapts, growing higher above the water. Grass and morning glory also sprout in the rice field. The peasants have to row a boat to get rid of the weeds so they don't swarm over the rice plants. As a bonus, the removed weed becomes ideal fresh foliage for the buffaloes.

At the end of rainy season, the water begins to flow from the rice fields to rivers and canals. This is what the peasants have been waiting for. They cast fishing nets to trap the fish swimming out of the rice field. There are varieties of fish that can be preserved and kept for a long time.

When the cool season comes, water in the field dries up while rice seeds are ripe and ready for harvest. The peasants in the Central Plains would help each other harvest their crops, the tradition commonly known as long khak.

The harvested rice is loaded in the cart and pulled back by the buffaloes to the threshing area near the house. The smooth and soft threshing ground is called laan nuad khao in Thai. The animal is then made to walk in a circle on the piles of rice to remove the grains from the stalks.

The paddy grains are collected in a barn of which the inside of the wall is coated with a mixture of clay and buffalo droppings. This primitive technique effectively insulates the barn against volatile temperature and keeps the grain safe from insects.

Most of the grain is loaded into the boats to sell to rice millers, with some portion kept for consumption. After rice growing activities have wound down, tending the buffaloes will continue. The animals will be released to eat grass and rice stalks left over in the field or remaining straw after harvest.

The timing coincides with summer school holidays and the kids are usually assigned to tend the buffaloes. They would let the animals graze in the field while they play with friends in the huts or shelters nearby. Late in the afternoon, the kids bring their animals back home and allow them to wallow in the dock in front of their homes as usual.

The peasants typically keep both male and female buffaloes. The newborn calves are raised to work on the farm, with some male calves sold.

When the buffaloes get very old and die the owner would ask their neighbours to dissect the meat and give to those who want some. Normally the owners do not eat the meat of their own buffaloes as they feel too attached to the animals that had tended their fields for a long time. But they would keep the skin to use as a leather thong and keep the skull with horns as a fond memory. No matter how long the time passes, the owner will always remember the name of each one of them.

This cycle of life is closely connected between a peasant and his buffalo. It is a natural bond so profound that is hard to put into words. Sadly, such sweet old days no longer exist and will never return. 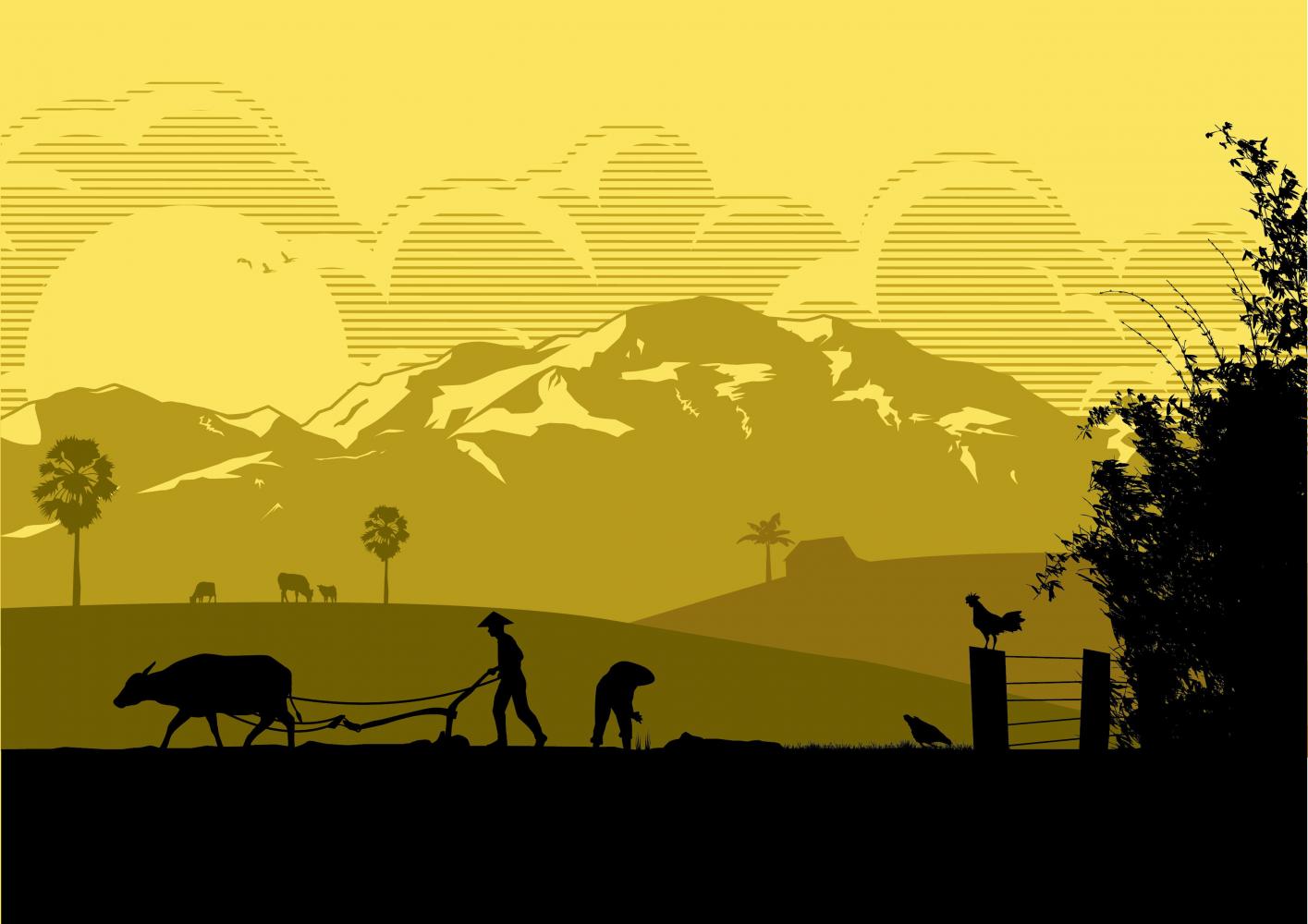