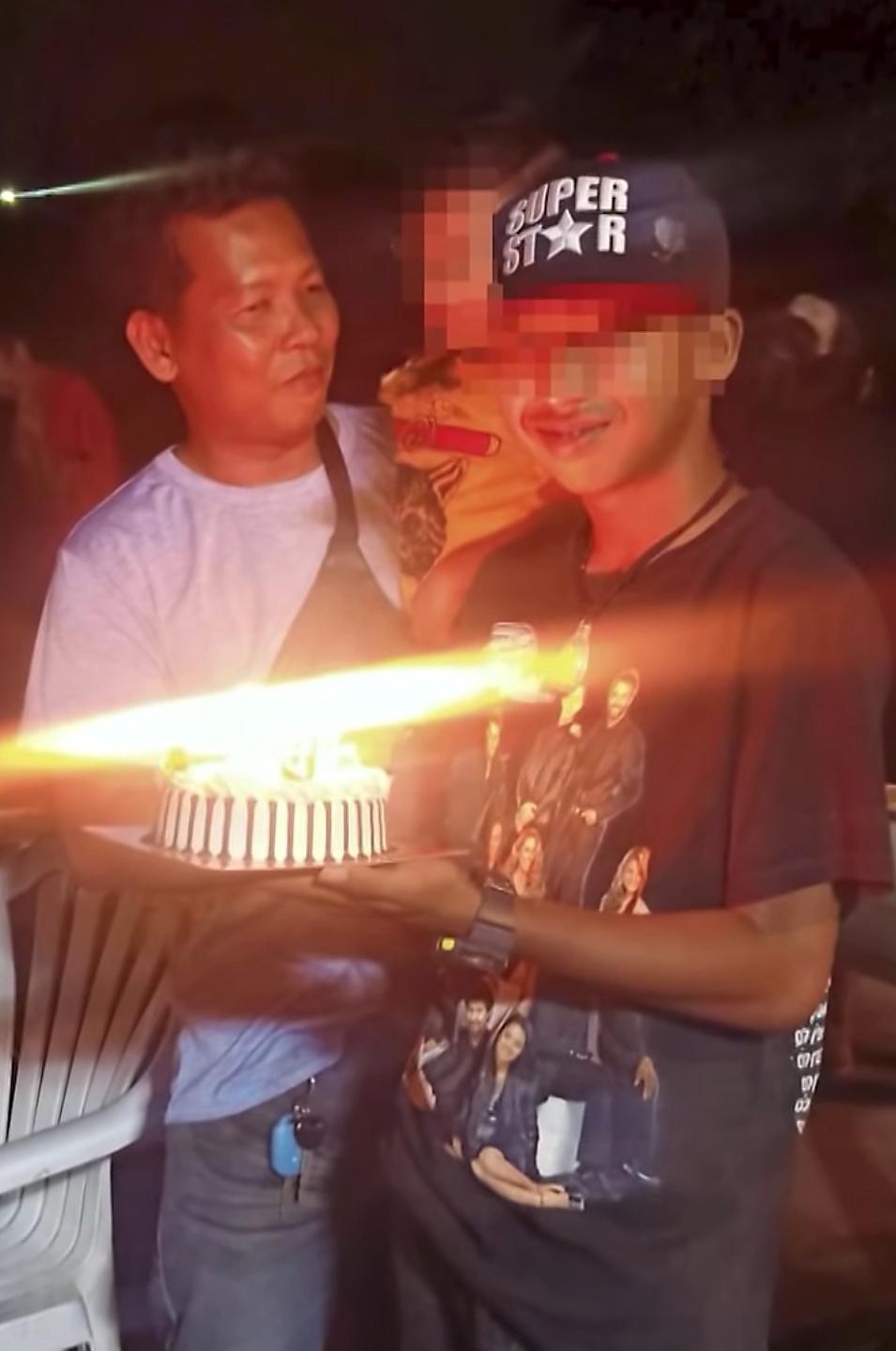 Police called to the scene of the clash outside Buathong Keha village on Bang Kruai-Sai Noi Road of Bang Bua Thong in Nonthaburi found the victim, Thitiphat "Job" Keawsamran, 15, with a bullet wound to the neck. His overturned motorcycle, which bore no licence plate, was nearby.

The clash started when a group of 20 friends, including Job, met three rivals from a technical college at a temple earlier that evening. One of the three had been involved in an earlier clash with someone in Job's group and wanted revenge, so called on the aid of another three friends.

The two gangs started arguing but the smaller group, realising they still had no chance against the larger one, fled in a Honda Wave belonging to "James", one of the six suspects.

However, the radiator of the Honda failed, so the car was unable to accelerate. Witness accounts clash, as the students in the Honda say the gang in pursuit threw ping pong bombs at the vehicle, bursting one of the tyres. In any event, the students felt trapped and tried to shoot their way out of trouble.

Pol Col Sirapop Anusiri, superintendent of Bang Bua Thong police, said the bigger gang in pursuit on motorcycles were able to catch up. "The lads in the vehicle started firing to clear a path to escape. They also forced the motorcycles to collide with a traffic island on the road," he said.

One boy in pursuit said he heard two shots, then saw Job fall off his motorbike onto the road. The gangs are thought to have scattered, with some of Job's friends later turning up at his family home to say Job had been killed.

His mother, Nantha Keowsamran, 36, said Job, the middle of three children, studies at a boarding school, and comes home at weekends. On the weekend of his death, he had come back for his father's birthday celebration, which they had held earlier that night.

"After we finished singing Happy Birthday, Job asked if he could go out to see his friends, as one of his seniors was himself having a birthday. I was reluctant at first but Job pleaded with me, saying it would be his last chance before he returned to school," she said. Images in the media show a smiling Job and his family blowing out his Dad's birthday cake, their last act as a family together.

Ms Nantha said Job left on his motorcycle with 20 of his mates. She kept in touch with her son and at half past midnight, Job told her on messenger he was about to come home. However, he didn't make it. She heard 20 minutes later her son was dead.

"Why did you do this to my son? He's only just come out of boarding school and has never had any trouble with anyone," she said to reporters in tears, referring to the suspects.

"And he is not social rubbish as some people claimed on social media. He is a good kid and keen football player. He was preparing to enter a football club at the end of this month. But he ended up dying, and that's the end of his future," she said.

Jarawee Chanmao, 36, mother of "James", who was driving the vehicle, said her son's group was attacked first.

Ms Jarawee said she went to an event that night in Chon Buri. About 2am, her son called to say he had wrecked her car. "He said he was pursued by a gang who tried to attack him and he went into hiding after the clash."

She said the other group deliberately crashed their bikes into the side of the Honda, chased the vehicle, and stabbed James and his friends with knives.

"James had the window of the car open and says someone stabbed him in the right arm. As they were chasing the car they were also tossing bombs at it, which burst one of the tires. One of James' friends decided to shoot at them, and that's when Job was killed. James fled with the car into the housing village and took shelter with a friend."

Ms Jarawee said the kids were scared, her son was crying and he begged her for help. She had her daughter go and find him. James' elder sister and the police later picked up James and two of his friends and took them to the station, where relatives of the accused gathered that night as police rounded up the gang.

"I have not thought of bailing him as I am worried he will be attacked again. The other side will want vengeance for Job's death for sure," she said.

Police say they found a modified gun, four bullets, two knives, and five ping pong bombs in the Honda. The suspects, including James, have been jointly charged with intentional killing, having firearms and explosive devices in their possession, and taking them to a public place without permission. The case continues.

A teacher in Kalasin is suing a parent for defamation after she appealed to social media followers about an incident in which he hit her teenage son for standing up to him over his haircut. 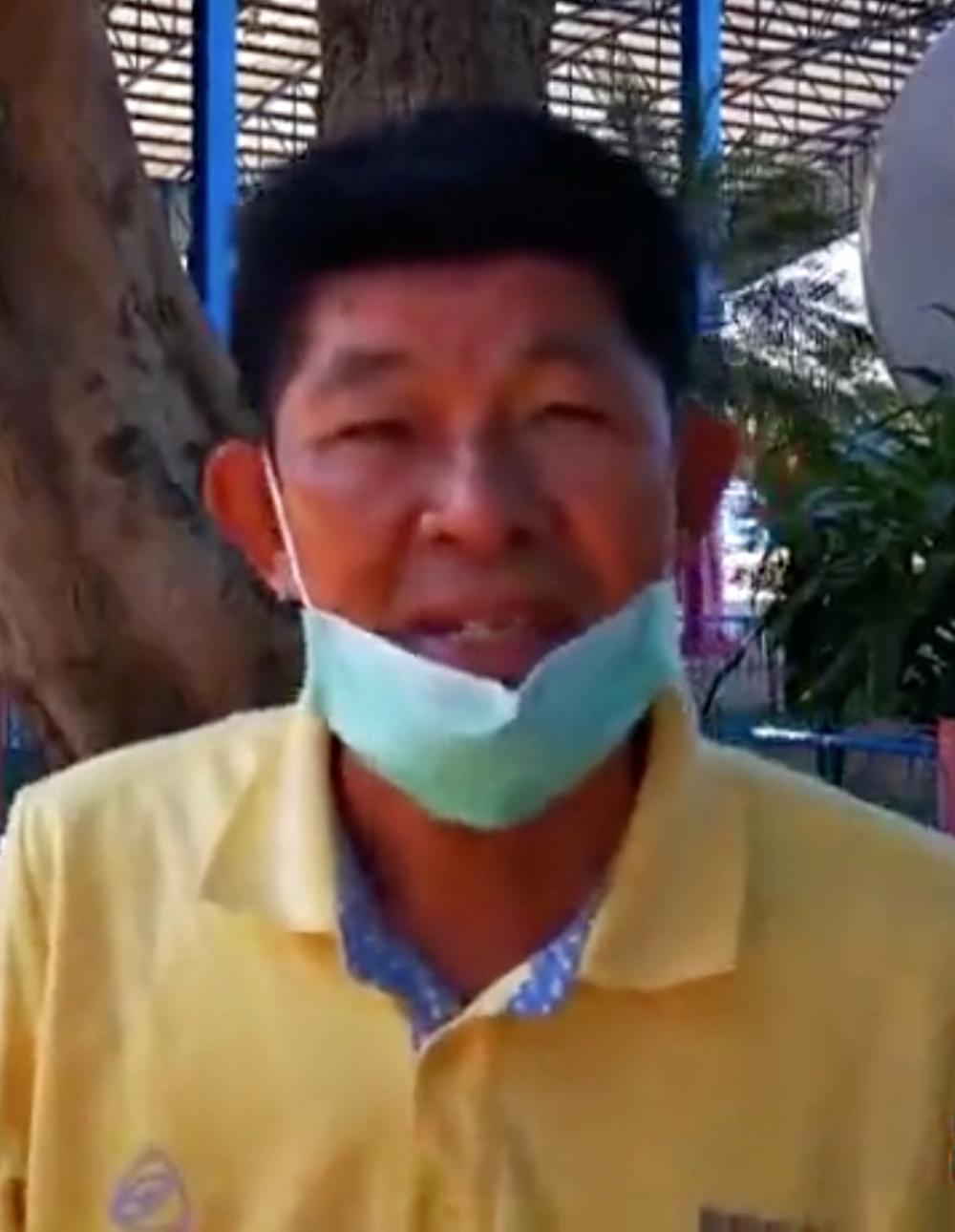 Surapol, teacher of 'A'

Unruean Saenrung, 37, complained after the teacher, "Surapol", reprimanded her son, "A" a Matthayom 5 student at a well-known school in Khaowong, Kalasin, on July 20 over his haircut, which he claimed breached regulations.

Accounts differ about what happened next, with A, aged 16, claiming he merely asked what style he should wear instead. The teacher, he said, told him not to argue and asked aloud, "Should I strike a student just before retirement?" 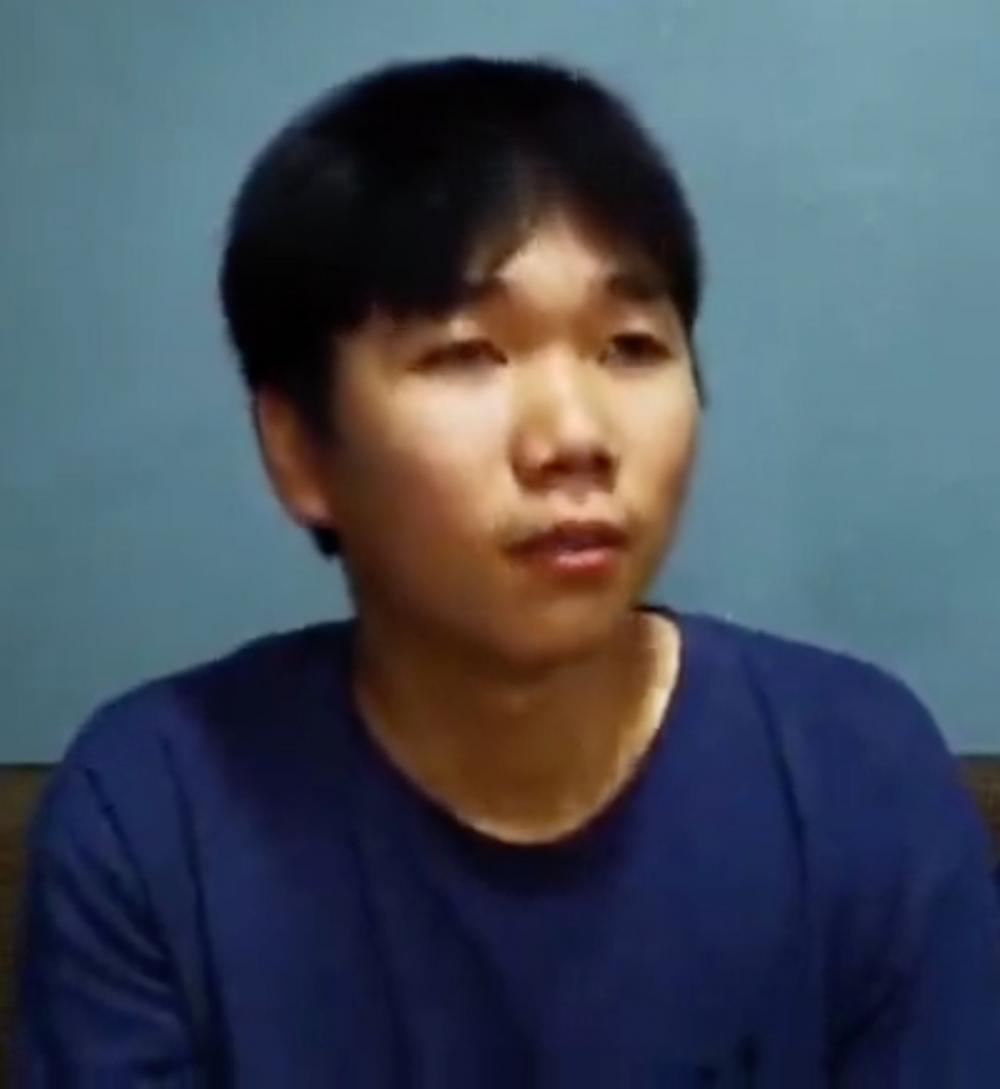 Mr Surapol, who was talking to another student at the time when he noticed A's hair and called him over, said the boy stood up to him. "Why can't I wear my hair long if I like?" he retorted. The teacher complained it was too long and layered.

Mr Surapol admitted hitting the boy, which left him with a split lip and ringing in his ear. He said the boy raised his right hand to strike him back, but Mr Surapol caught it.

The teacher insists it was a light smack and he did not resort to force as the boy's mother claimed. "I have been reprimanding students for years and have never run into any bother before," he said, adding the school has a reputation for order and discipline.

After Mr Surapol hit him, A asked the school director whether he went too far, and that night told his mother what had happened. She took him to hospital for a checkup and complained to Khaowong police. 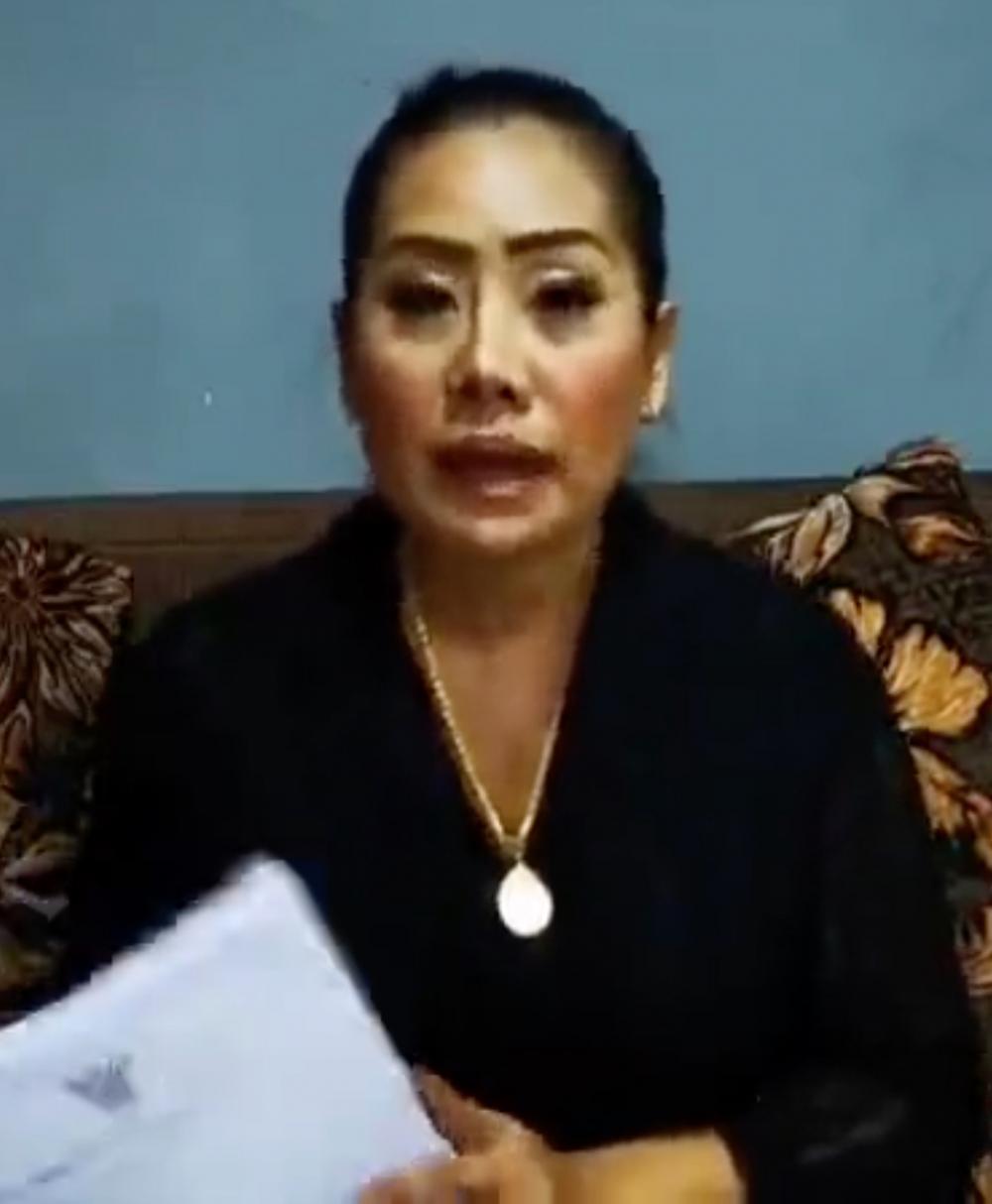 Ms Unruean, the mother, said she contacted the school head and the teacher, who offered initially to pay 3,000 baht in compensation. She also posted about the saga to Facebook. She argued her son cut his hair in the style mandated by the Ministry of Education, and said Mr Surapol should have given him a verbal warning.

After seeing the post Mr Surapol abruptly withdrew his offer of payment. He said he would also sue Ms Unruean for defamation. "I wanted a chance to talk but she raced onto Facebook and blackened my name."

Net idol Apirak "Sia Po" Chatharnon left empty-handed after turning up at a city police station last week to challenge the Progressive Movement co-founder, Thanathorn Juangroongruangkit, about his role in stoking student protests against the government. 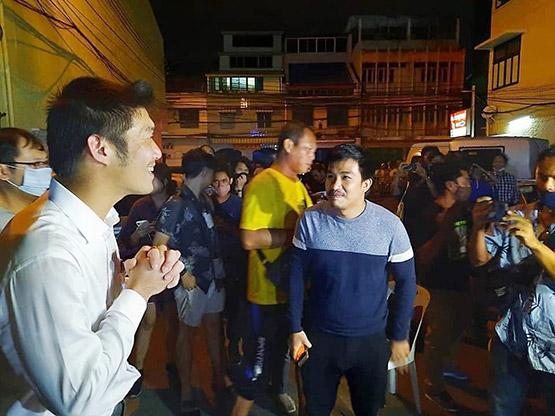 Mr Thanathorn turned up at Samranrat police station on Wednesday night asking to meet protester Baramee Chairat, 53, secretary-general of the Assembly of the Poor, one of four protesters arrested that day for his role in the July 18 Free Youth rally.

Sia Po clashed with the Progressive Movement group in May after its supporters pestered him to support a fund-raising drive they had launched to help the public affected by the Covid-19 economic shutdown.

The net idol and former boxer, who is well known for supporting charitable causes, said he respected Mr Thanathorn but thought some of his stands were too strong. He transferred 10 baht in a show of displeasure.

Sia Po wrote on social media that he came alone to talk to Mr Thanathorn about liberty and rights, and ask what peaceful means he would employ if the army and students ended up coming to blows. Speaking to reporters at the station, Sia Po was blunter, asking why Mr Thanathorn was trying to divide society when the outcome could be Thais killing each other on the streets.

"If that's the case, why not lead from the front? What's he scared of? Because on social media everybody is talking about that thing which we all love," Sia Po said, referring to the monarchy. Some student demands have included reforms to the monarchy.

Earlier, Mr Thanathorn remarked on claims that he and his movement were behind the protests. "I am indeed behind them -- because they are running ahead so fast I can't keep up," he joked.

"I am happy to lend support, but worry it would not be appropriate to stand up in front of them as their leader as it is their movement, they created it themselves. Even I was taken aback by it all, as it's so big," he said.