Alongside anti-government demonstrations, protesters are raising their voice for equality and LGBTI gender rights. 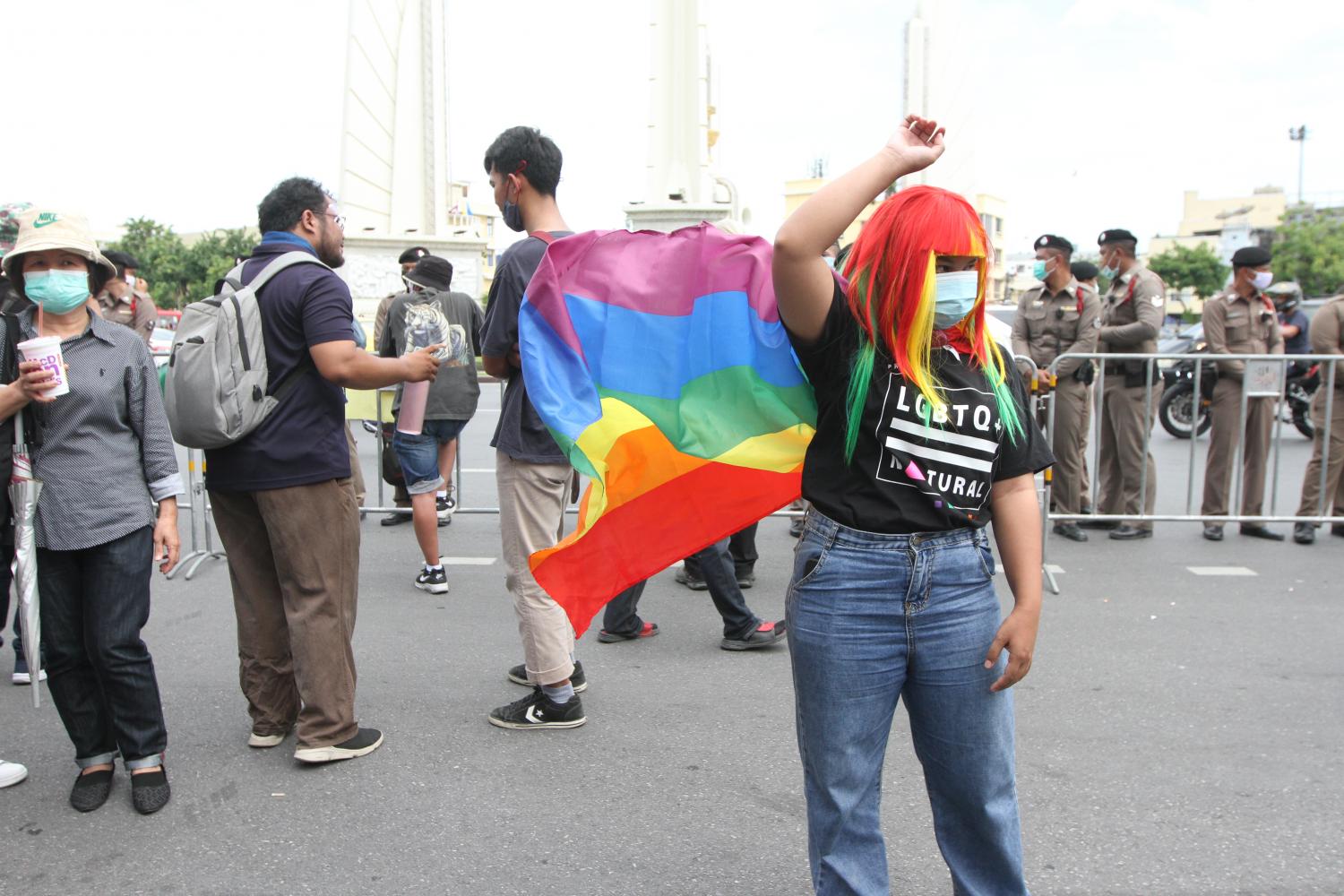 For equality and democracy

It was a sight to behold when rainbow flags appeared at Democracy Monument.

Ever since anti-government protests erupted nationwide, another item that has also found its way to these demonstrations is the rainbow flag. From the LGBTI-led protest Mob Mai Moong Ming Tae Toong Ting Ka Khun Ratthaban (literally meaning: "We're not cute but we're queer, dear parliament") to the recent mass gathering on Aug 16 along Ratchadamnoen Avenue, rainbow flags -- and even drag queens -- have become a new fixture at Democracy Monument. The issue of gender equality and LGBTI rights have been promoted and discussed during the protests, which have seen more involvement of LGBTI than ever before in Thailand.

It must be an emotional scene for those who have been advocating for the cause here for decades. Young protesters, sometimes in drag, have taken to the stage to discuss marriage equality, the possibility of a transgender woman becoming prime minister, gender recognition, and more to the crowds at a monument that has long been a part of Thai history. That, in itself, was historic. 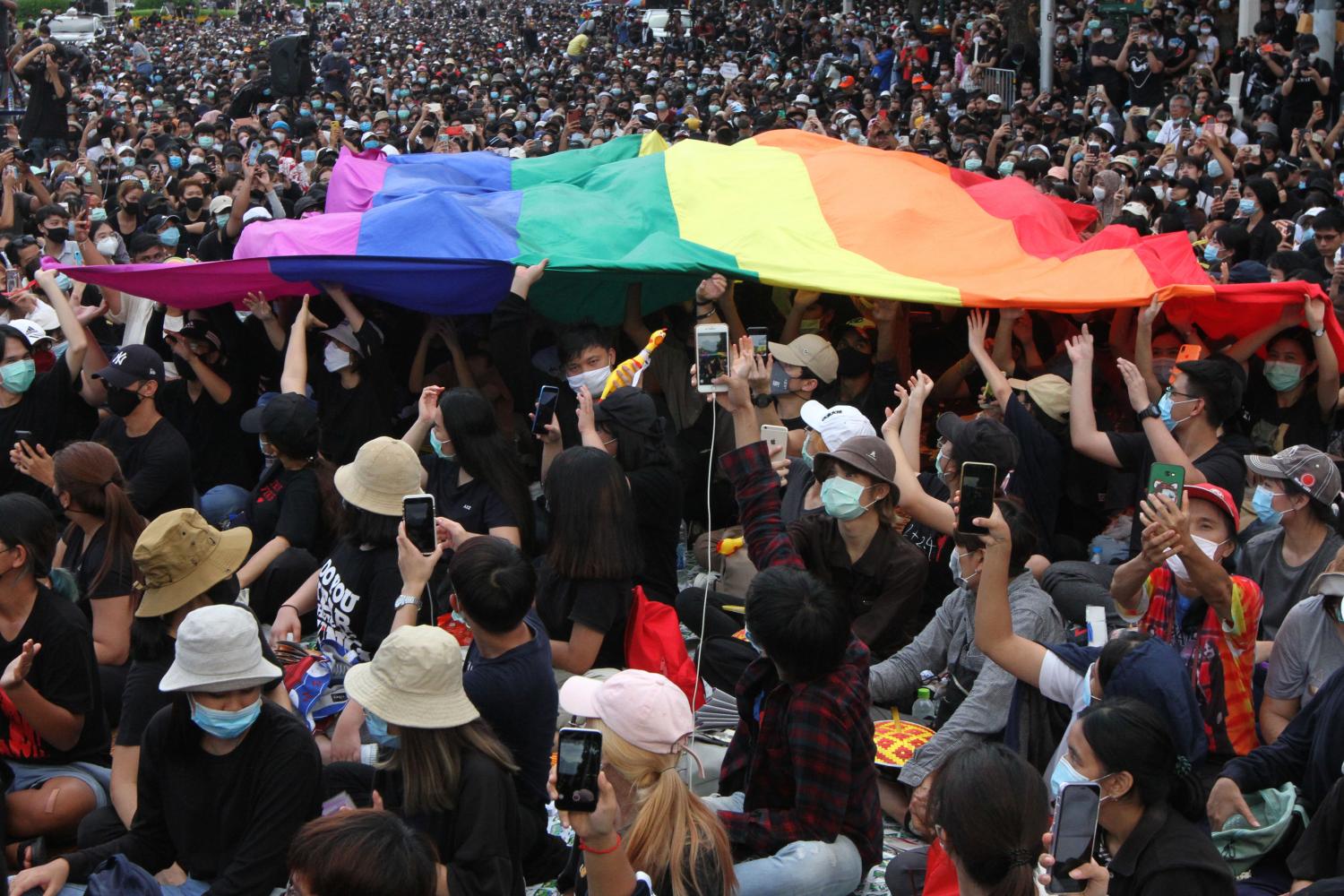 A large rainbow flag made its appearance on Ratchadamnoen Avenue.

The LGBTI rights movement continues to move forward in the country. While the prospect of marriage equality -- concerning the introduction of a civil partnership bill or amending the existing marriage law -- has previously taken centre stage in discussions, we're now seeing progress in gender recognition. Earlier this month, it was reported that the Ministry of Social Development and Human Security is set to submit its gender recognition bill for consideration by the parliament in October.

The bill is set to establish the rights of transgender people and may allow title changes without requiring sex reassignment surgery.

"We have taken note of all groups, including non-binary people. We are still discussing legal details for those seeking title change but whether or not it will come true rests with those in power," said Chompoonute Nakornthap, the chair of the working group on the gender recognition draft bill for the Ministry of Social Development and Human Security, to the Bangkok Post. 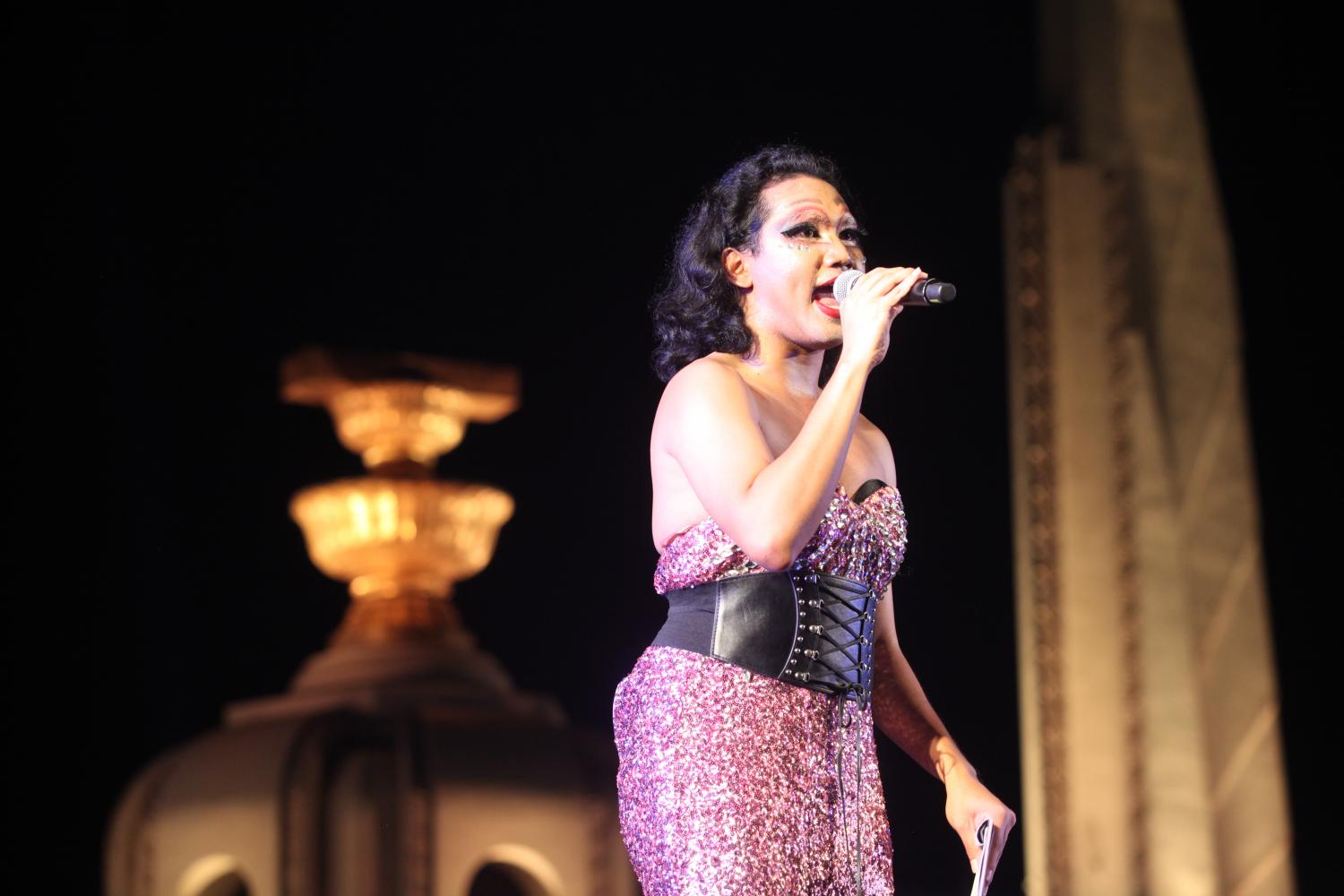 A protester in drag spoke to the crowd at Democracy Monument.

Move Forward MP Tunyawaj Kamolwongwat, the spokesman for the House committee on children, youths, women, the elderly, the disabled, ethnic groups and LGBTI, posted on Facebook that gender recognition and title change won't automatically grant equality and that discrimination won't simply disappear just because a bill is introduced. The state will also have to enact further policies to grant them access to welfare benefits, medical treatment, and legal rights.

"This is only the beginning. There are many more issues that we need to develop," wrote Tunyawaj. 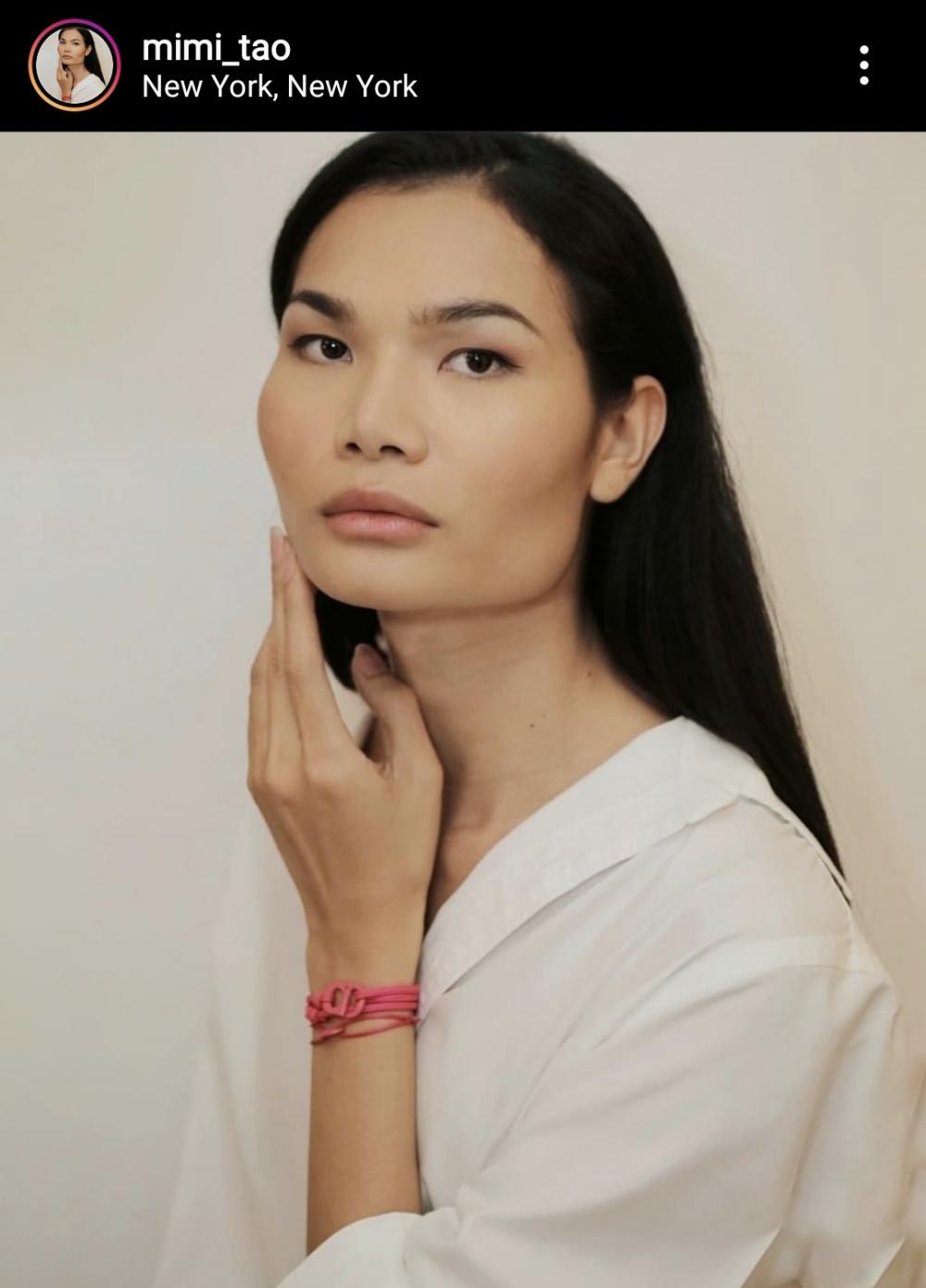 What is it like to be a Thai transgender woman in 2020? Let's have a look at the lives of three transgender women who found themselves in the news this month.

First, it's time for celebration for Mimi Tao, a Thai transgender model who is making it big abroad. She was the first transgender model to appear on Project Runway and most recently, Mimi sees herself in the role of an ambassador for the global movement #TogetherBand, brought by British sustainable brand BOTTLETOP.

#TogetherBand aims to achieve and humanise the United Nations' 17 Global Goals and "bring people into the conversation by asking everyone to choose the Global Goal that matters most to them personally", according to its website. Mimi represents Goal 10: reduced inequalities. This band is made from recycled rope and Humanium metal clasp (upcycled stainless steel repurposed from illegal firearms). All profits made from sales will be given to projects that advance 17 Global Goals. In addition to Mimi, ambassadors include celebrities such as Cara Delevingne, Michelle Yeoh, David Beckham, and more.

But transsexuality isn't always accepted or celebrated. We now look to June, a hospitality worker seeking new jobs during the pandemic. She recently applied for a position of a cosmetics salesperson for Cute Press and Oriental Princess under SSUP Group. She contacted the company's recruitment and got a reply saying "Sorry, we only accept women". Employment discrimination is sadly nothing new even though it's a violation of the Gender Equality Act 2015. The incident was shared on social media by activist Nada Chaiyajit. A Change.org campaign was also created to call for action from the company.

Last week, SSUP released a statement apologising for the incident, saying it will meet with June and Rainbow Sky Association of Thailand to further discuss details, as well as invite her back to apply for the position.

The company also promised to adopt UN Standards of Conduct for Business to eradicate all forms of gender-based discrimination and to support human rights and gender equality advocacy.

Peaceful protests featuring three-finger salute and white ribbons have been adopted by students across the country. The act is supported by many but also shunned by some. Trans model and TV personality Ornapa "Ma" Krisadee was among those who criticised the youths, writing on social media they should just "spread your pussy and stay home. Don't come to school". Her outrageous comment came as an attack against the students and angry netizens quickly fired back. Many comments were directed at Ornapa's gender identity with many people calling her "uncle" and using her dead name (original name before transition) to mock and shame her.

Of course, Ornapa will have to live with the consequences of her action and some would say she did bring it on herself. But is it necessary to attack a person's gender and deadname them? That's rather detrimental. It's unfortunate that some of the people who have been attacking Ornapa's gender identity are actually trans themselves. There are many other ways to express disapproval and disagreement toward someone. Focus instead on the person and their action. Gender has nothing to do with it.

Celebrated, discriminated and shamed -- these are just some of the things happening to transgender women today. Thailand may be luckier with a more tolerant atmosphere but transgender people still experience challenges in different dimensions on a regular basis. 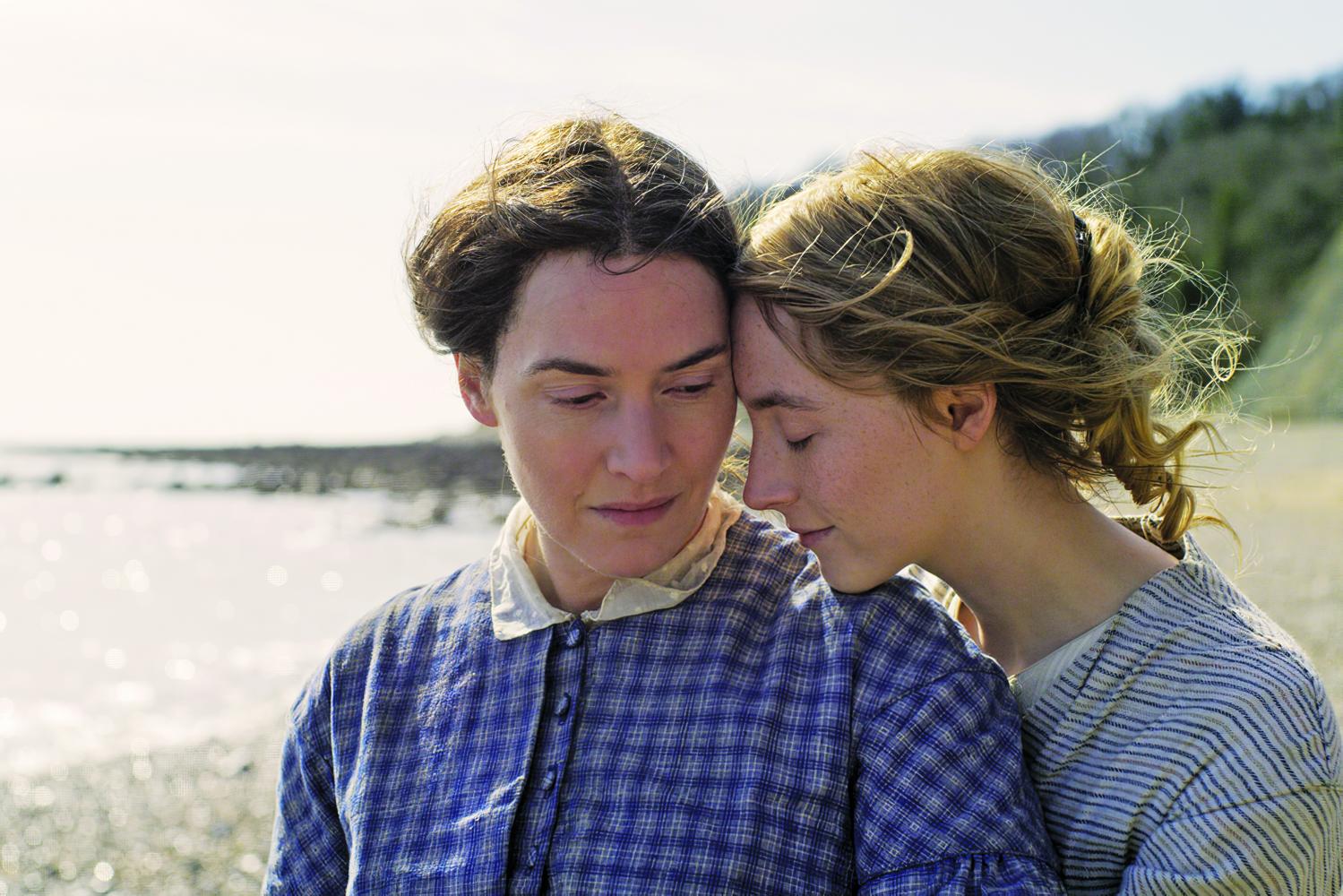 It's interesting how we've never been without lesbian period drama during the past few years. From Portrait Of A Lady On Fire, The Favourite, Colette and Carol, onscreen sapphic romance have taken us on several trips to the past and a new addition will soon join this list.

Last week, the trailer for Ammonite dropped, and audiences got to see Kate Winslet and Saoirse Ronan frolicking along the beach like it's Portrait Of A Lady On Fire, but on the Southern English coastline. Set in the 1840s, the film follows palaeontologist Mary Anning (Winslet) as she hunts for fossils along the coast. A married woman Charlotte (Ronan) is entrusted in Mary's care by Charlotte's husband. Though coming from different worlds, the two women grow close and soon develop a passionate love affair.

Ammonite is written and directed by none other than Francis Lee, whose feature debut God's Own Country -- a critically-acclaimed gay romantic drama -- was released in 2017. Ammonite is his second feature and dare we say it looks promising. It's not yet clear if or when the film will be released in Thailand.