The annual vegetarian festival will get under way between the first to the ninth day of the ninth lunar month in the Chinese calendar. This year, it will fall between Oct 17-25 and celebrations have been organised in many places including Bangkok, Pattaya, Suphan Buri, Nakhon Sawan, Takua Pa in Phangnga and Hat Yai. The highlight will be a grand celebration in Phuket, believed to be the origin of the vegetarian festival in Thailand.

The nine-day festival is a period when people refrain from consuming meat and animal-derived food such as dairy, animal oil, fish sauce and eggs. They will also not consume strong-smelling plants such as garlic, onion, rakkyo (Chinese garlic), chives and tobacco. Last but not least, they will also abstain from alcohol and sex. The aim is to purify the mind and body to gain merit.

The history of the vegetarian festival is believed to have started in the Kratu district of Phuket in 1825 when some members of a visiting Chinese opera troupe became sick from an illness, believed to be malaria. Therefore, the rest of the troupe adhered to a strict vegetarian diet to pay homage to the Nine Emperor Gods whom they believed to have power in curing illnesses and granting good fortune, wealth and longevity. Soon, the ill performers recovered and they carried on the practice every year, which later spread to other Chinese descendants living in many parts of the country. 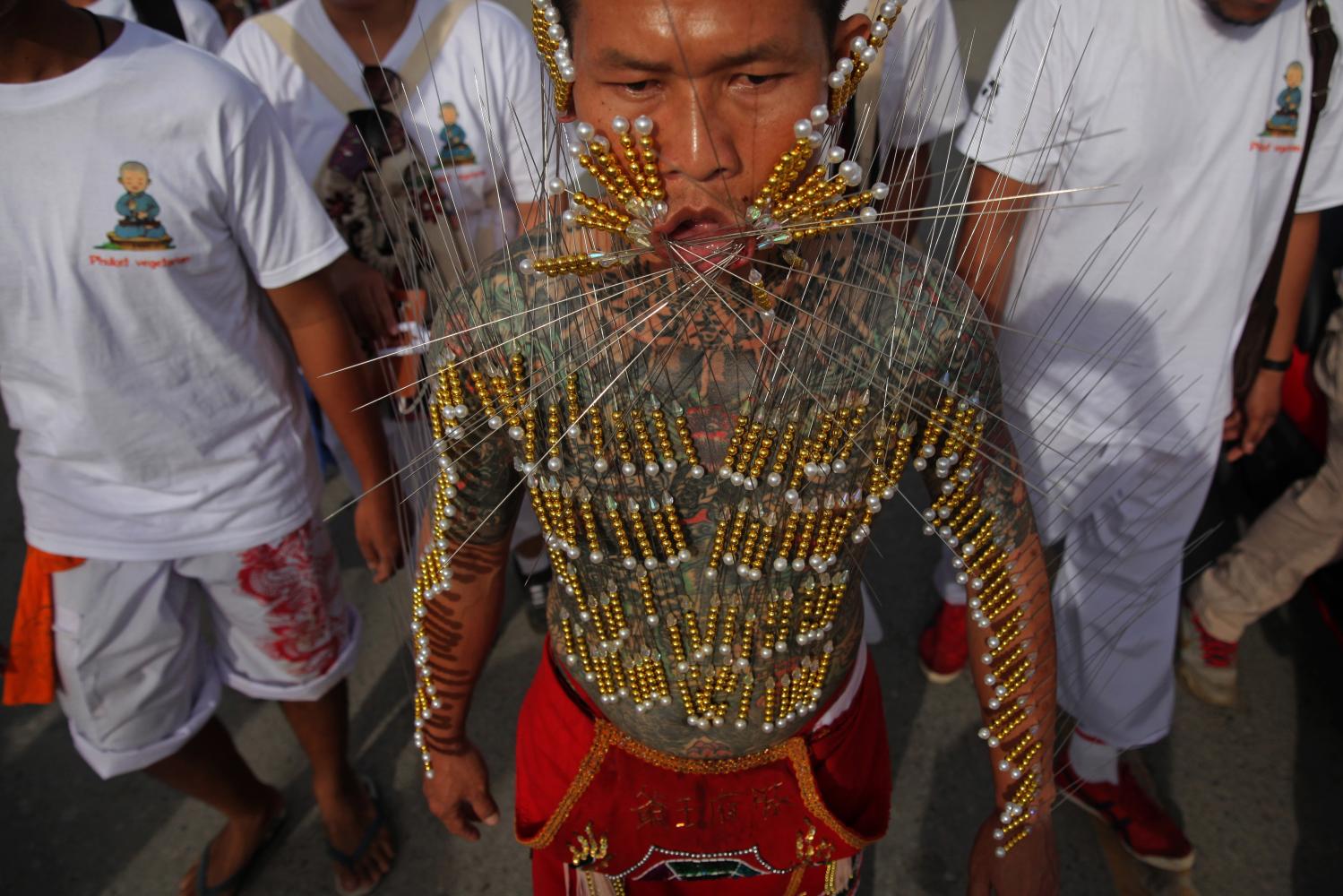 During the vegetarian festival, Chinese shrines in Phuket organise extravagant parades of devotees who act as ma song or spiritual mediums. By tradition, they pierce sharp weapons of the Chinese deities such as swords and spears through their cheeks, earlobes or arms. But some devotees prefer to use weird objects like daggers, an aluminium fence, an M16 toy gun, a guitar, a saw blade and steel chains.

The devotee parade will organise daily to bless worshippers along the streets. It starts in the morning from one or two Chinese shrines every day and the parade is joined by hundreds of devotees and thousands of followers. During the procession, some devotees will stop to perform a group blessing by pounding their backs and foreheads with an axe and running a knife or a sword through their tongues.

From time to time they will also dance on a sea of firecrackers lit by worshippers on the street. The devotees believe that the mutilation and their sacrifice will take evil spirits away from the community and bring good luck to the people. The procession can be observed along many streets including Phunphon, Rasada, Phuket, Montri and Kra roads and will end near Saphan Hin Public Park. 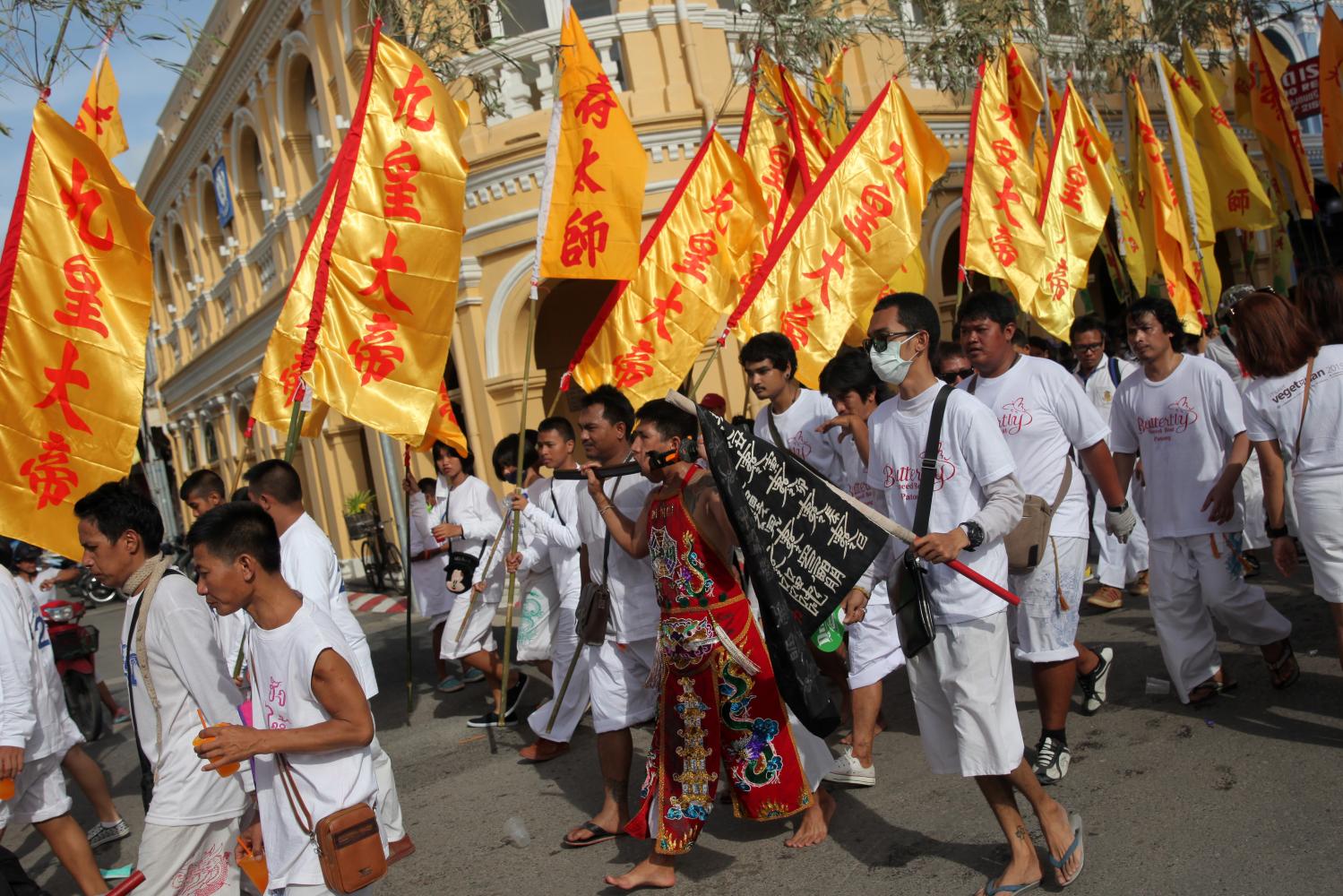 Due to the Covid-19 epidemic, tourists and worshippers are required to wear masks. Each Chinese shrine is required to provide hand sanitiser and must check the body temperature of worshippers before allowing them to pray inside. Free vegetarian food will still be offered but for takeaway only.

The Tourism Authority of Thailand (TAT) expects the festival will draw at least 100,000 visitors and generate up to 200 million baht for the economy of Phuket.

For more information, visit the Facebook page of the Phuket Vegetarian Festival bit.ly/3j94ZMd or call the TAT's Phuket office at 076-212-213.