Sarah's holding the baby, Art on the ropes, backseat dancer

Italian-Thai model Sarah Casinghini faces the prospect of bringing up a second child alone after her new love, Ukrainian model Vadim Ashab, insisted the pair had broken up and they had no plans to marry, despite her claims to the contrary. 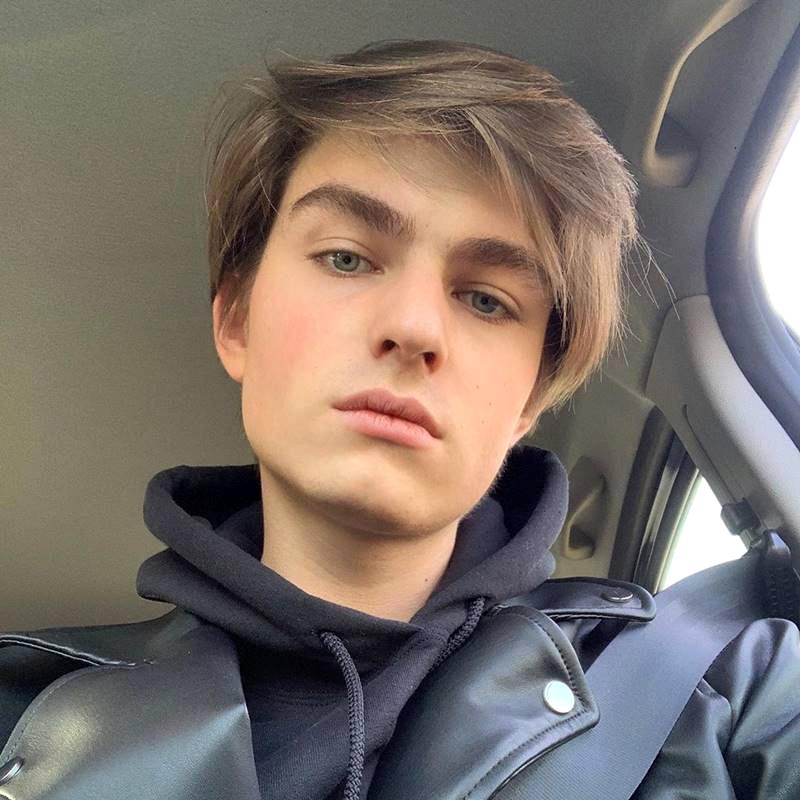 Contacted by Thai netizens via social media, Vadim, 20, confirmed he and Sarah, 33, had been together but said they had broken up early this year at her request. They had not discussed marriage later this year and the couple were no longer together.

Vadim works as a model in China and is stuck there during Covid-19, having left Thailand in January after he and Sarah broke up. He was not present for the birth of his daughter but denies fleeing when he heard that Sarah was pregnant.

As for his status as Emily's father, he suggested her birth was an accident. "Who would want to be a father at 19," he asked, referring to his age at the time of the child's birth.

In response to a nasty remark by a member of Sarah's fanclub that he should learn how to use a condom, Vadim insisted he always wears protection. He has declined repeated invitations by Sarah's fans to contact the Thai media to give his side, saying he doesn't want any more dramas and believes many people knew the "truth" about his relationship with Sarah before he spoke out.

Vadim's revelations leave Sarah in an awkward position of possibly having to raise her young family alone. In the immediate aftermath, Sarah said she was so stressed to hear Vadim's claims that she had stopped lactating milk for Emily, and was having to console herself that everything was okay. "I try to kid myself into thinking I am fine and tell myself to smile and be cheerful, but my body shows that's not the case," she wrote on social media.

"Does anyone have advice on how to get the milk back? I feel sorry for my daughter, and want to raise her on mother's milk the way I did her elder brother," she said, referring to her young son, Maxwell, aged six. Rather than responding to Vadim's claims, she asked fans to move the debate elsewhere, as she wanted her social media space to concern itself with her experience as a mother.

Sarah's own revelation two weeks ago that she had started a second family came amid a custody and maintenance dispute with her former partner, actor Pirat "Mike" Nitipaisankul, concerning their son Maxwell.

Sarah had kept Emily's existence a secret when the row with Mike broke out last month after Mike went to court seeking to be formally recognised as Maxwell's son and joint custody rights. He said he has supported Maxwell since his birth but Sarah had started denying him access.

Sole parental rights belong to Sarah as the boy was born out of wedlock. Thai law defaults to the mother in such cases, meaning the father, while not legally recognised as such, is not obliged to pay for the child's upkeep either. Maxwell lives with Sarah's family in Phuket.

After she confirmed rumours that she had given birth to Emily, Mike promptly declared he would withdraw the court action as a decision in his favour could have obliged him to pay maintenance. He is evidently worried some of the money could end up supporting another man's child.

He said he had paid more than 10 million baht in support for Maxwell since his birth but objected to Sarah's provocative move to ratchet up demands on his finances even as he struggled to make ends meet during Covid-19. 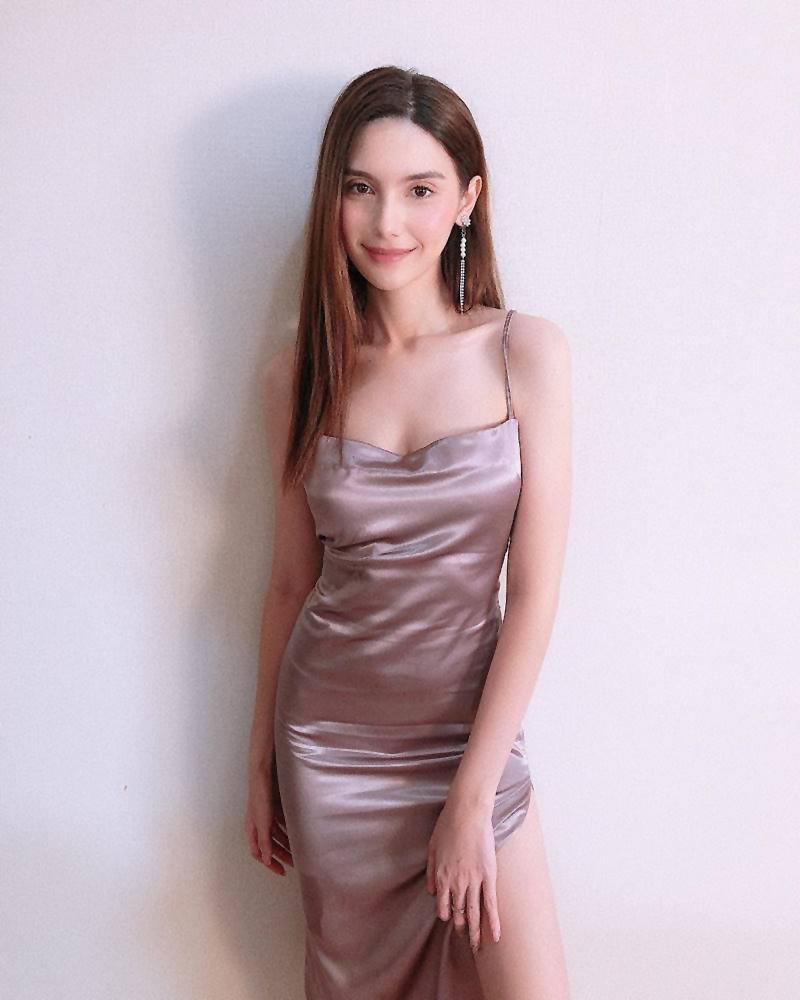 After Sarah revealed she had a second child he wanted to be sure that any future help went directly to his son. He would withdraw the legal papers and instead start a savings plan for his son, with the goal of handing over the money when he came of age.

Mike's news that he was no longer willing to pay Sarah regular support threw her lawyer into a panic, as it raised the prospect she would have to pay for the boy's upkeep alone, though Mike said she could still ask for help if she needed it.

Her lawyer, Pramarn Laungwattanawanich, urged Mike to reconsider his decision to abandon court action, saying he could still ask for legal rights as father while scrapping his claim for joint custody. Last week he filed a formal objection to Mike's move to withdraw his case.

Presenter Panadda "Boom" Wongphudee said on Thursday she had since spoken to Mike, who told her the Central Juvenile and Family Court had put a stay on his bid to withdraw the legal action in which he sought formal recognition as Maxwell's dad while it hears Mr Pramarn's objection. Meanwhile, Mike's celebrity lawyer, Nitithorn "James" Kaewto, said he expects good news to emerge on the custody and maintenance front. The drama continues.

Tough guy actor Pasut "Art" Banyam, 37, is nursing a bruised face and shattered eyebrow after losing a celebrity boxing contest to an older actor last week, much to his own surprise. 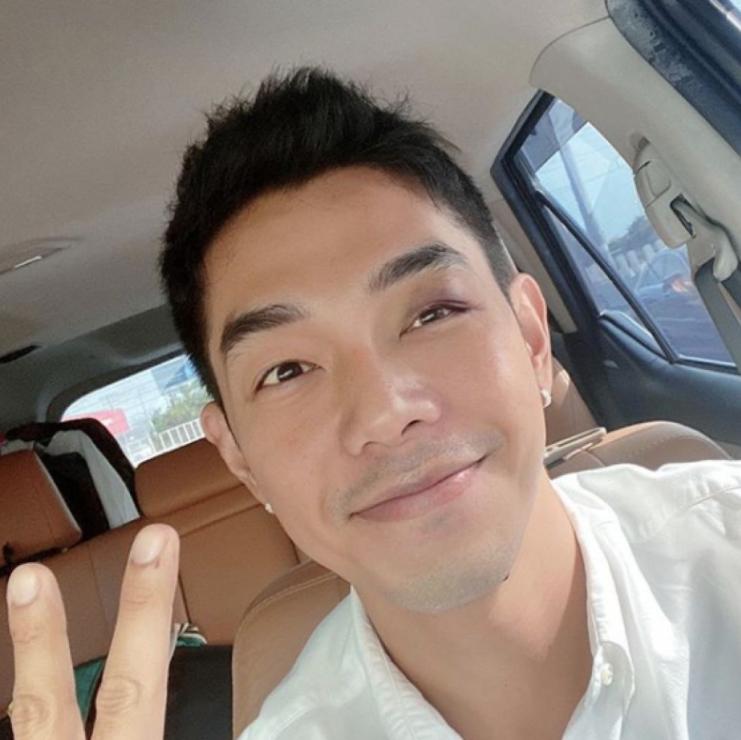 Art made it into the start of the third round of his match with actor Dom Hetrakul, 44, before a live audience on Monday before the referee started the count. The two squared off in the opening bout of 10Fight10's second season on Workpoint TV.

Dom had taken flak on social media for his age, with critics predicting he would fall to the younger man's blows. He went into the match with a point to prove, as his team said later. "Dom went on attack from the start, getting in a few precision punches to the face, while Art was in defensive pose and throwing a few punches back," the Daily News said, describing the match.

"In the second round, Dom goes on the attack again, but Art, who has a bloody nose, holds his own, getting off a few beautiful punches. The fight starts to heat up by the end of this round after a volley of punches exchanged by both sides. Dom takes a few punches and staggers a bit.

"Art's handler staunches the flow of blood ringside, but as the third round opens Dom goes on the attack again, letting off a volley of punches to Art's face. The referee starts the count and calls off the bout."

The result stunned both contestants, with Art admitting Dom, despite his age, was much stronger than he thought. The head of Dom's team, Antoine Pinto, a French-Thai boxer, said they were delighted as Dom took flak for being too old.

Art suffered a bloody nose and eyebrow, the legacy of an old wound which the fight reopened. He said he also took a blow to the throat, which hampered his breathing.

The spectacle of Art taking one blow to the head after another shocked fans in the stadium, who are not used to seeing such spirited fighting. The two are not professional boxers, organisers hastened to point out, though both underwent months of training beforehand.

In a show of sportsmanship, Art prostrated himself before Dom in the ring after the result was declared. He denied he was disappointed but admitted his boxing days were over.

On Thursday, speaking on the set of a new soap opera, Art said he was surprised to be on the receiving end of so many punches. Speaking about his experience as a wild man getting into scrapes, he said he has no problem holding his own. "Normally if I fight off the ring I am the one delivering the blows. If I am to carry on I will have to get some training on what it is like to be on the receiving end, as it really threw me," he said.

Meanwhile, a day after Art's blood-spattered loss to Dom, a young singer who was pencilled in to fight later in the tournament pulled out.

Rapper Guntee Pitithan, 23, was supposed to take on singer Chatchawit "Victor" Techarukpong, 28. Apologising to his fans, he said on social media he had decided to pull out after suffering an "accident". No further details were available.

A song about misery was just the tonic for a man injured in a road accident after his girlfriend declared she was leaving him. 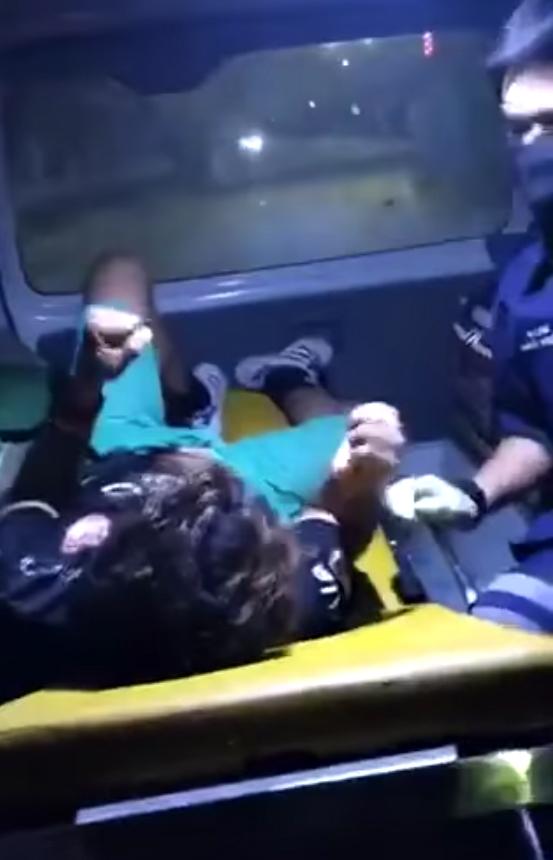 Road accident victim perks up when rescue workers play a song for him.

Suchart Wassanarungruangsuk, 48, was walking his bike across Ratchaphruek Road in Nonthaburi's Bang Kruai on Tuesday when he was grazed by a taxi. He suffered minor injuries in the scrape.

Bang Kruai police, who attended the scene, say Mr Suchart, who had been drinking, left home with his bike after his girlfriend told him their relationship was over. He was depressed about life and unwilling to get his wounds treated until police told him that if he didn't go hospital they would take him to the police station instead.

Mr Suchart, who relented, agreed to get in the back of a rescue worker's vehicle as they took him to seek care. Lying on his stretcher, however, he was still down in the dumps so the rescue workers offered to play him a humorous clip on their phone to perk his spirits up.

Warming to the idea of being entertained, Mr Suchart, however, asked if they could play him a song instead.

A clip taken by a rescue worker shows Mr Suchart jigging along, conducting and singing as he gets "in" with the light-hearted song he requested, Rork Seum Sao (Depression), by Isan singer Lamplern Wongsakorn. The song is about a young man who takes to drink to forget about his old girlfriend, but when the booze runs out gets further depressed. A rescue worker wearing a mask performs along with him.

The clip of Mr Suchart lamenting his fate but cheering to the song went viral on social media, with Thais enjoying his antics.

"The man quickly forgot his injuries, so carried away was he by the song," one news report said.