This week's subject of review is theoretically the closest thing to the world's best dining establishment a faithful epicure in Bangkok can get to at the moment.

Opened a month ago at the 5-star Capella Bangkok hotel, Côte by Mauro Colagreco is a venture by the three Michelin-starred chef who has brought his Mirazur restaurant on the French Riviera to the No.1 spot on the 2019 World's 50 Best Restaurant list.

Here on the bank of the Chao Phraya River, Colagreco named his 60-seater Côte as a tribute to its culinary origin in France's Côte d'Azur.

The restaurant, blessed with a panoramic view of the glittering river, offers a feeling that blends gastronomic savoir faire with a home-like warmth.

Perhaps to add a more folksy vibe, the warmly-lit dining room was energised by upbeat background music. It was flocked by a mixed clientele of business execs, Western expats and well-off residents in the neighbourhood. 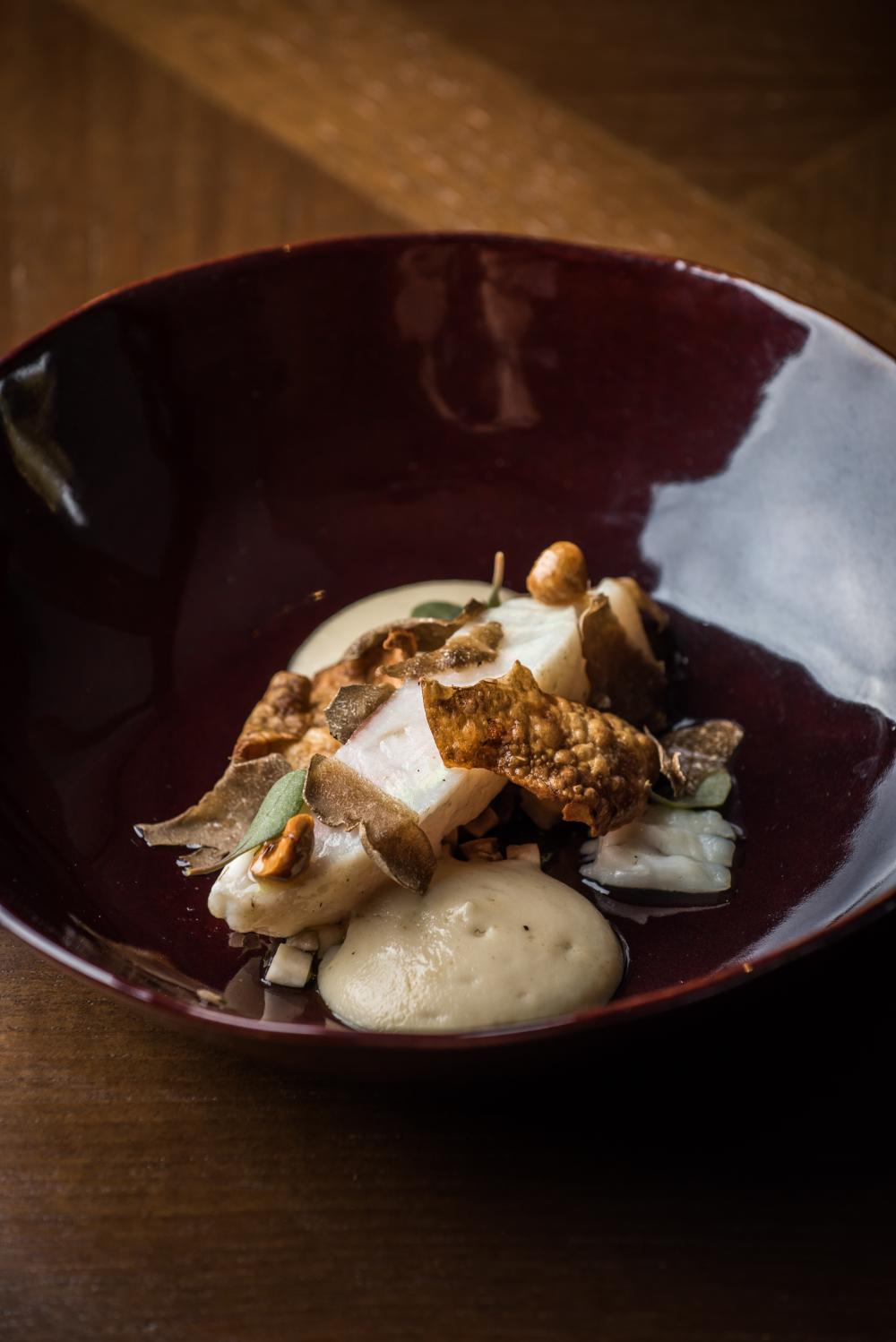 Côte offers for lunch and dinner options of a la carte and set menus.

A three-course lunch set is priced at 1,500 baht without wine pairing while prices for seafood main courses start from 890 baht. A Riviera cheese selection costs 650 baht.

Dinner guests are urged to go for the carte blanche menu, 6,100 baht per person, which allows guests "the luxury of choosing not to choose". It's a nine-course meal, available only for dinner, curated by the chef upon the day's best produce.

Though following the same philosophy of the much-revered Mirazur, all dishes are designed exclusively for the Bangkok venture.

My dinner in the style of carte blanche began with a selection of amuse-bouche. They included a mini seaweed tart, a cod fish doughnut and a shiitake macaron with black pudding terrine centre. 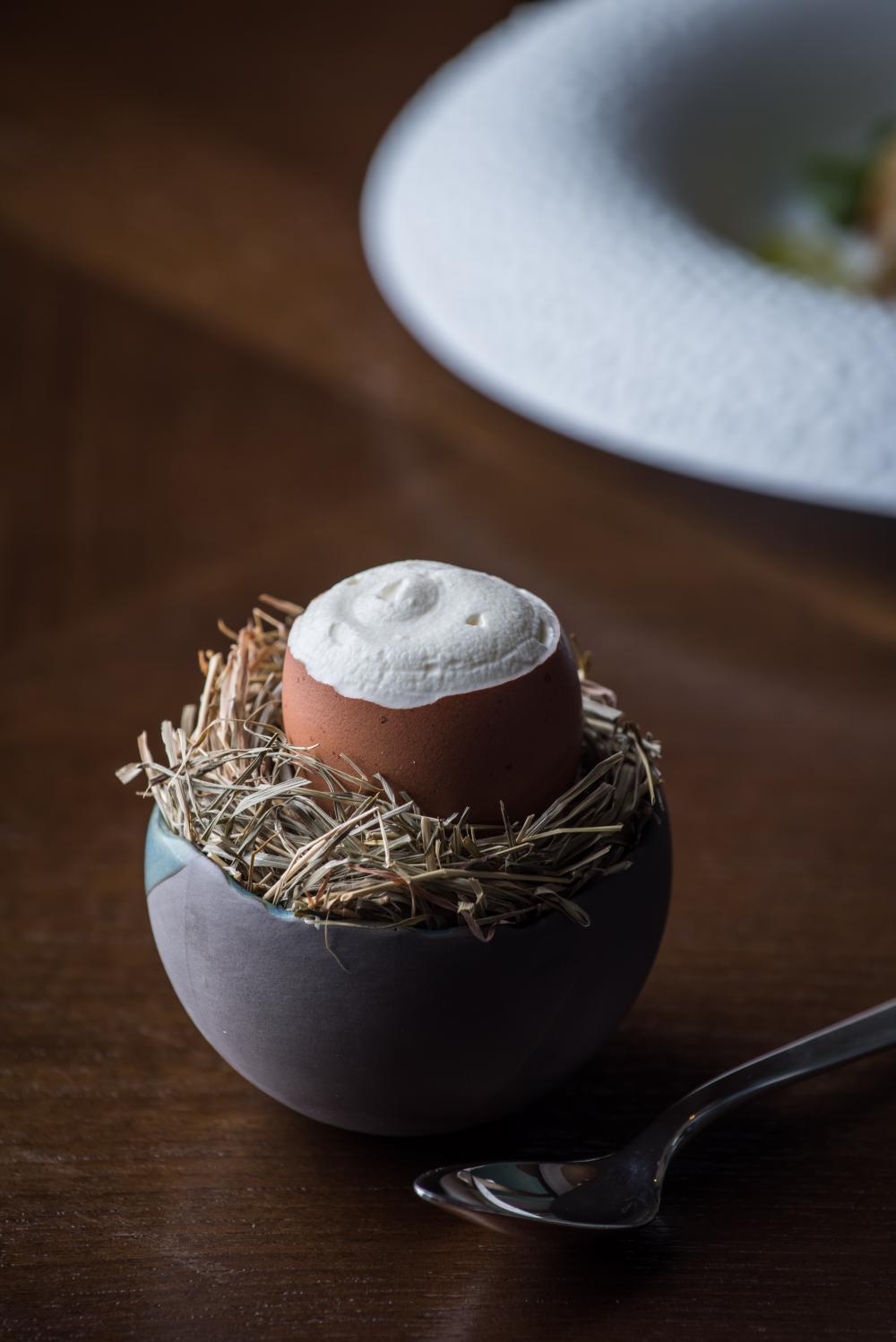 A hefty loaf of complimentary bread then followed. The bread, designed for sharing, is made to Colagreco's grandma's rustic recipe and to be enjoyed with his signature concoction of olive oil.

Next dish, Mediterranean red prawn ceviche, represented the first of the whole nine courses. It's a delicate and refreshing unification of plump, citrus-cured prawn, paper-thin radish, pomegranate and grapefruit sauce. The sauce was an addictively delicious blend of savoury broth and characteristic bitter taste of the citrus fruit.

Egg chaud-froid is a signature treat at Mirazur. Served in an egg shell, it's delicious play of temperatures and textures through layers of creamy yolk, cauliflower mousse, caviar and horseradish foam.

Flame-seared squid and pork lard are the protein centrepieces in the third course: squid with coconut ajo blanco, parsley and lardo.

The tender squid came bathed in coconut milk gazpacho drenched with fragrant parsley oil and capped with a thin and translucent sliver of rosemary-cured pork fat. 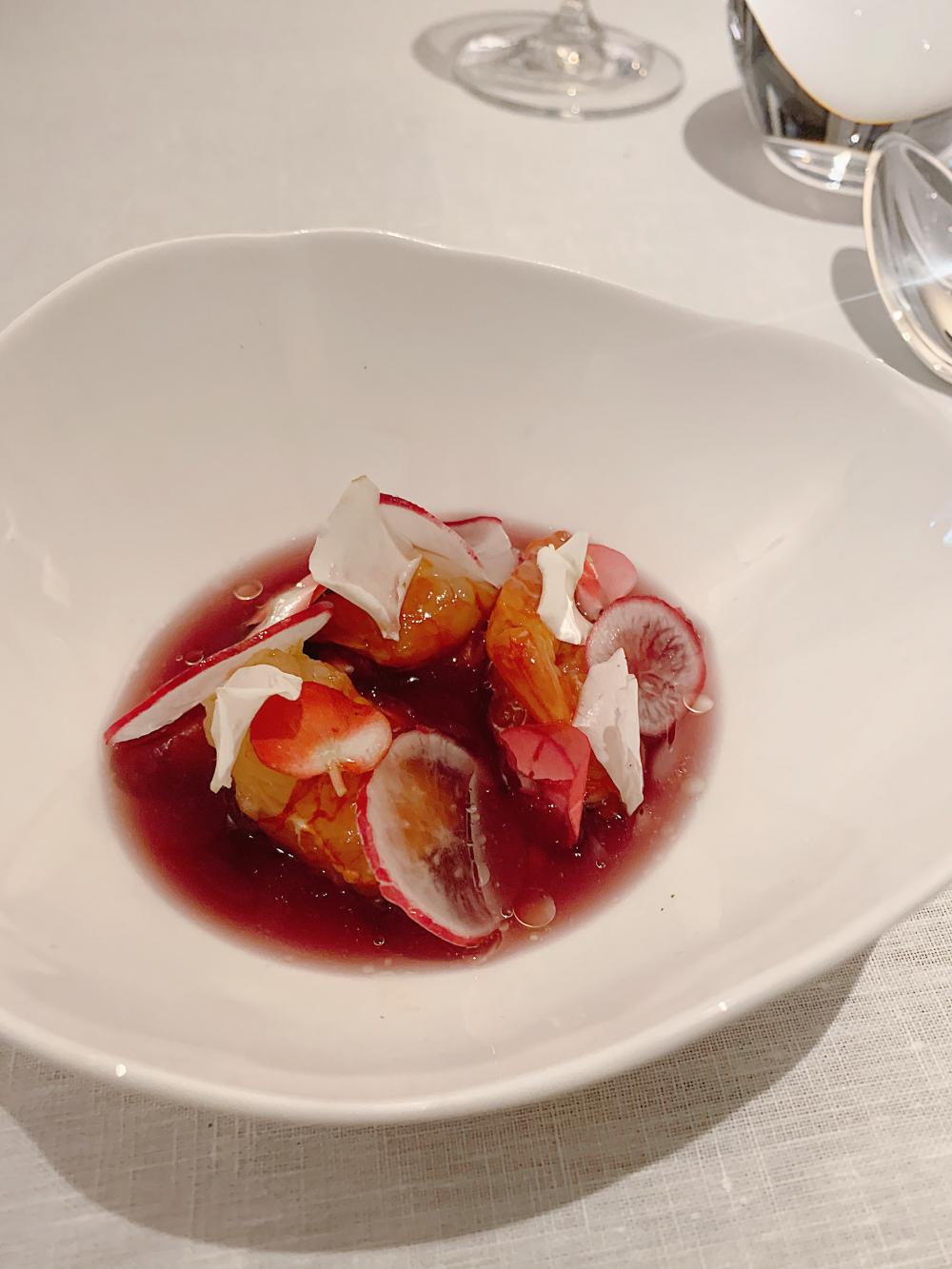 A rendition of pan-seared Rougie foie gras with beetroot vinaigrette sauce, which arrived next, was flawless.

The plump and springy and juicy blue lobster from Brittany starred in the next dish. Enhancing the mildly sweet crustacean were black trumpet mushrooms, marigold florets and buttery frothy Hollandaise sauce.

The following course was represented by a fillet of John Dory, Jerusalem artichokes -- in pureed and deep-fried forms -- roasted hazelnuts and freshly grated French black truffle.

Pigeon connoisseurs are promised tears of joy by a showcase of the poultry's breast, leg and liver.

The breast and the leg, cooked medium rare and wonderfully retaining its tender meat, are complemented by mulberry jam, endive and a tiny helping of barley risotto.

Arriving on a separate plate on crispy and paper-thin gingerbread cookies was the pigeon liver pate.

A nine-glass wine pairing package to go with the nine-course dinner costs 2,900 baht per person. Reservations are recommended especially on weekends. 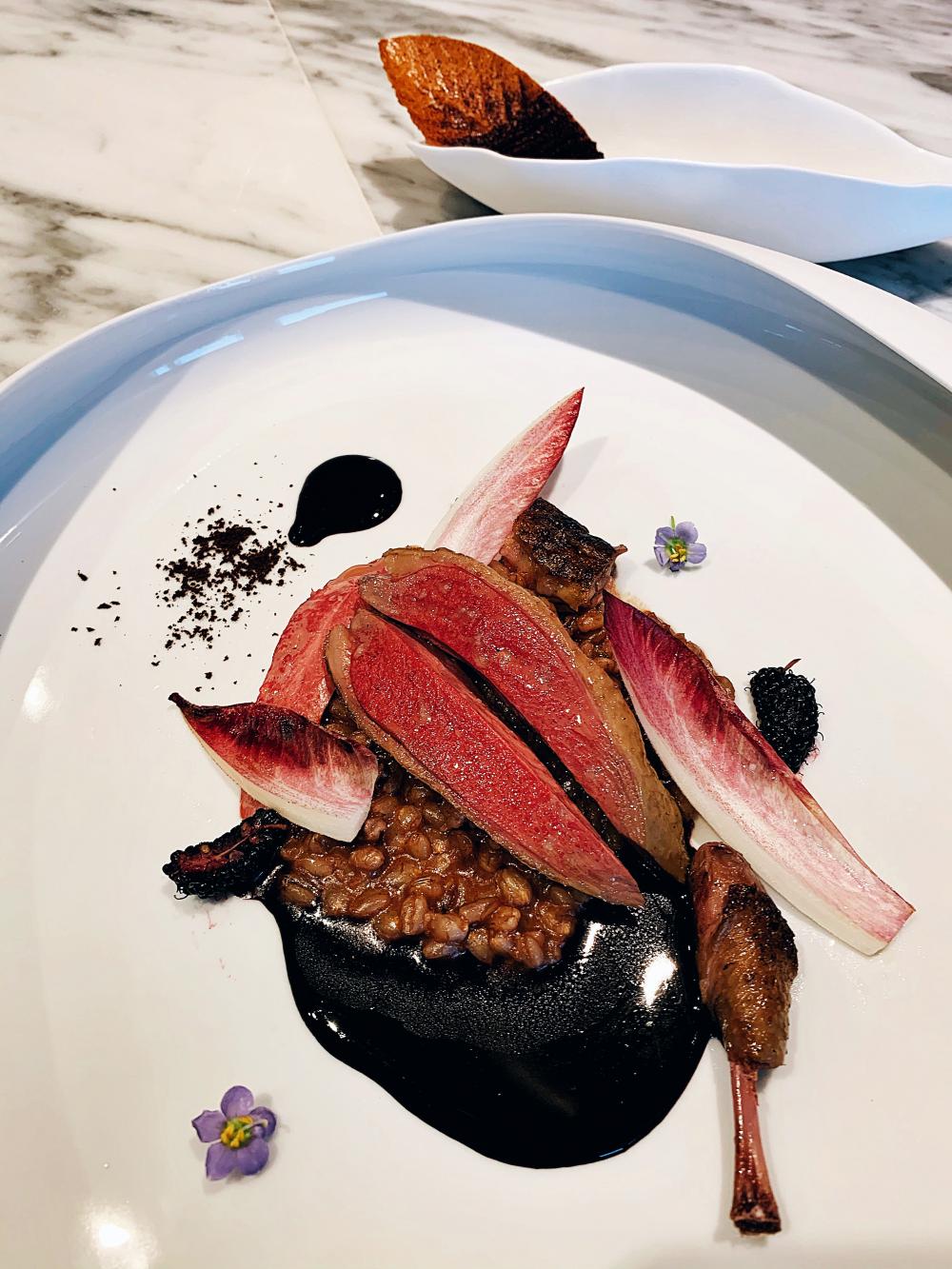 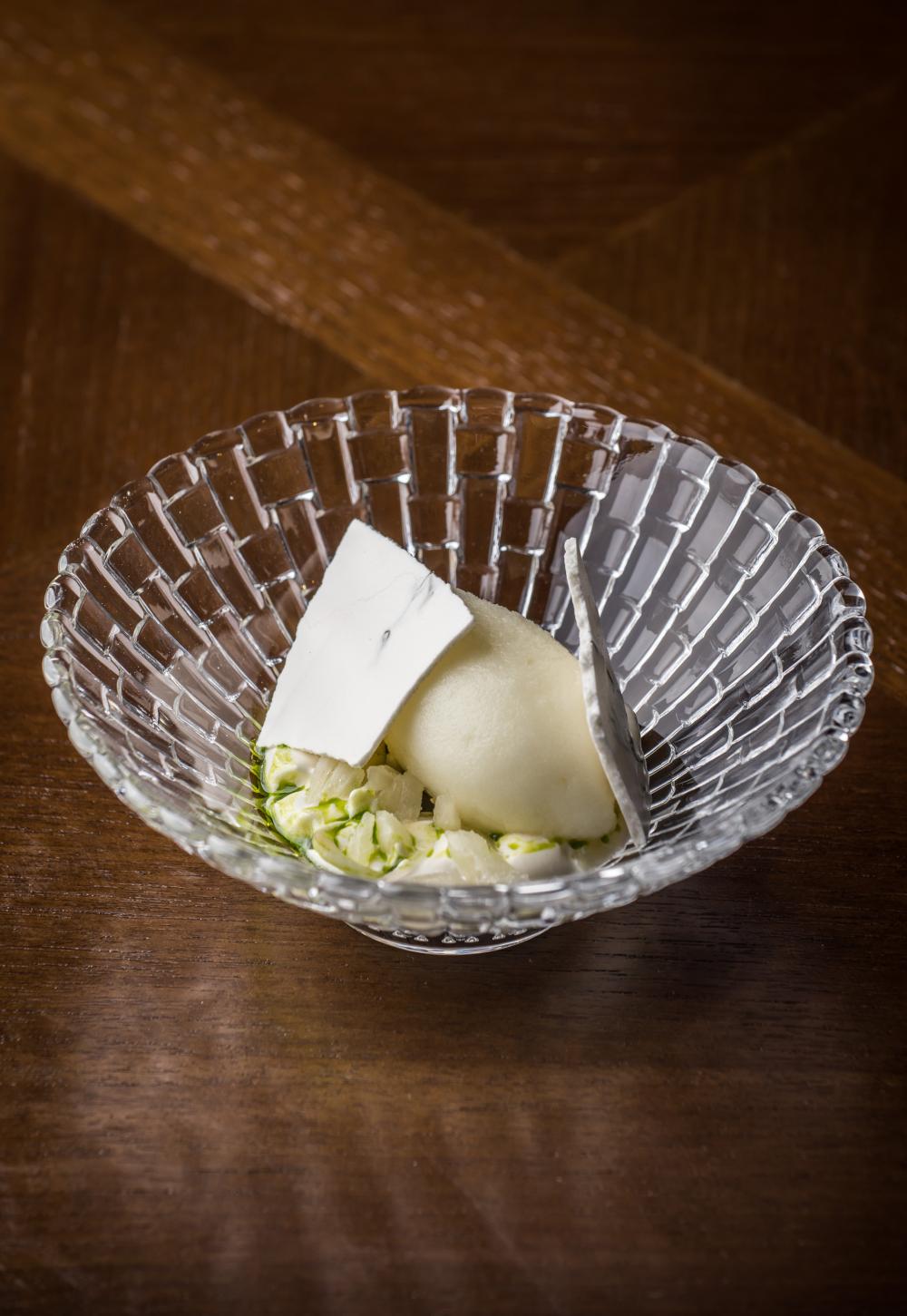