In a world beset by pandemics and protests, the Bangkok Art Biennale hopes to provide an escape route

While the Covid-19 pandemic has disrupted the schedule of several art events around the world and Thailand is facing a political dilemma, the Bangkok Art Biennale (BAB) returns to the City of Angels for its second edition, aiming to light a candle for hope and invigorate the Thai art scene during these tough times.

Ranging from historical temples and galleries to art complexes, 82 artists from 35 countries are showcasing a wide collection of 200 works at 10 Bangkok landmarks, including Wat Pho, Wat Arun, Wat Prayurawongsawas, Museum Siam, The Prelude, The Parq, Bangkok Art and Culture Centre, Lhong 1919 and River City Bangkok, which are located both in downtown and on the banks of the Chao Phraya River.

"Originally, we focused on the sufficiency economy, environmental degradation and sustainable living before the meaning of 'Escape Routes' changed somewhat due to the Covid-19 outbreak and the pro-democracy movement. Now, we expand to the themes of diaspora, migrations, gender and politics in different dimensions. 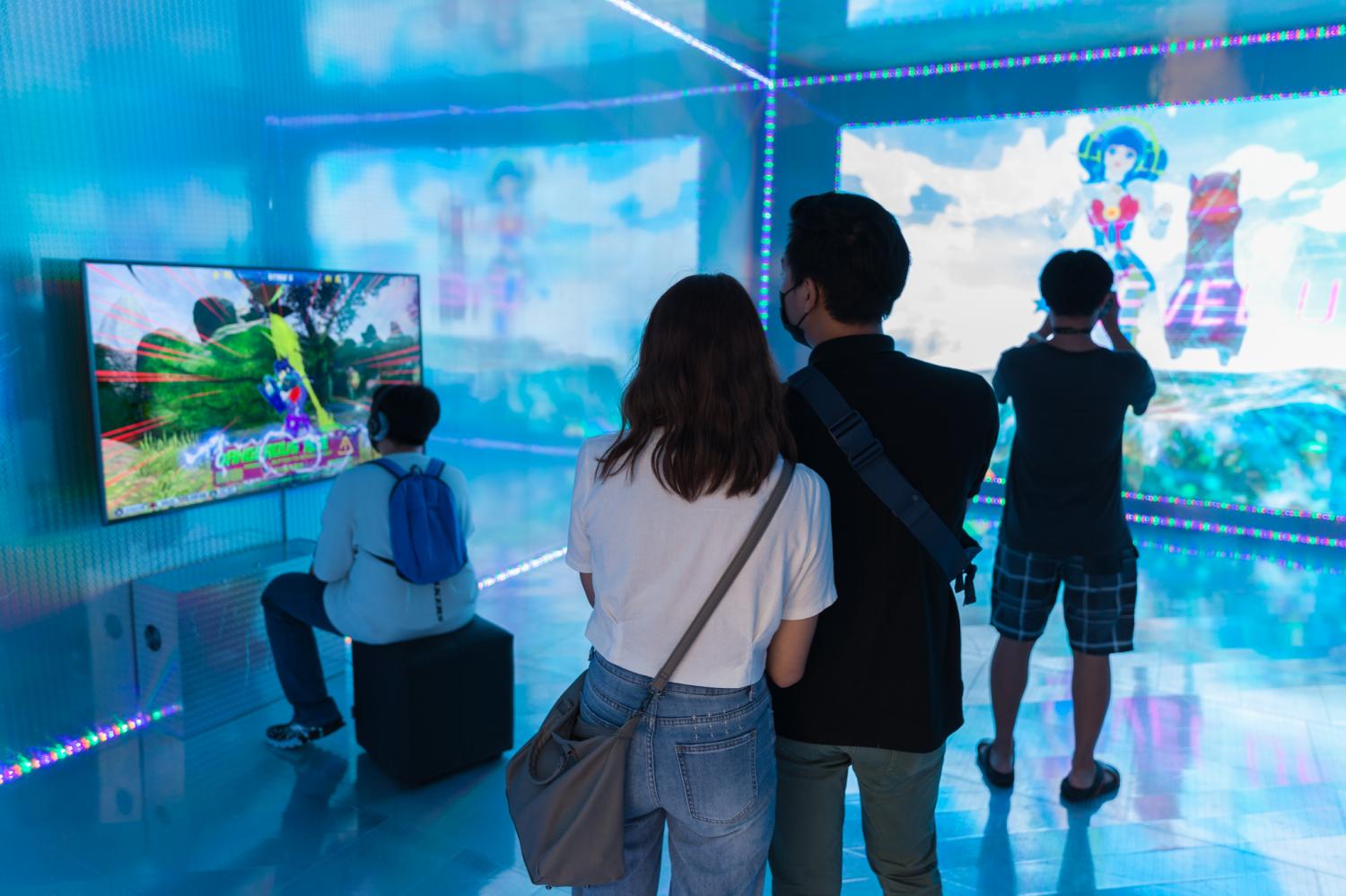 All these are the subjects and objects to the 'Escape Routes' theme, depending on how artists want to define and display their works," said Prof Apinan Poshyananda, chief executive and artistic director of Bangkok Art Biennale.

"Art mirrors life and what's happening in society, so it's easy for people to understand. For example, painter Lampu Kansanoh's works capture many situations in Thailand, in which people try to seek an exit. This festival will become a stage for people to discuss different topics, based on art. Apart from streets, we need to provide space for people to express their feelings."

Here's some highlights at the two major venues, which are located in downtown Bangkok. 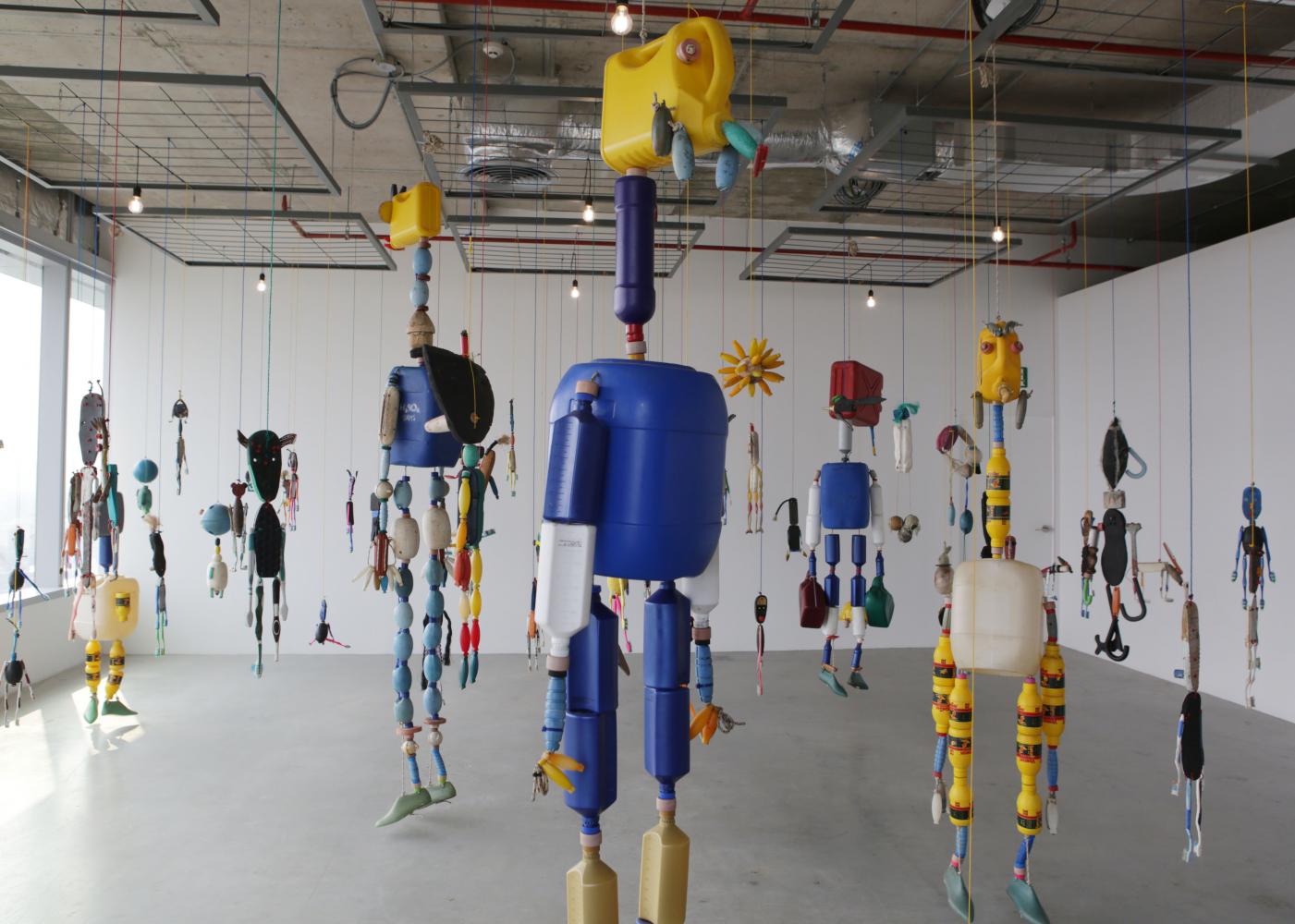 The Bangkok Art and Culture Centre is home to 38 international and Thai artists with 86 works. Among them is artist-activist Ai Weiwei, who in 2011 was arrested and detained by Chinese authorities. In 2015, he settled in Berlin and transformed a former brewery into his studio before relocating to England last year.

His art has focused on border disputes, political divisiveness and the rise of anti-immigration nationalism. At the main gallery on the 9th floor, he showcases the iconic black inflatable boat titled Law Of The Journey (2016), carrying faceless refugee figures escaping from Bangladesh, Iraq, Syria, Turkey, Gaza and Mexico.

On the right side, the wall is covered with monochrome pictograms and computerised graphics, a work called Odyssey (2016), depicting human experiences of migration, war and plight. On the opposite wall is a photo collection, In Idomeni (2016), illustrating the makeshift refugee camps that stand on the Macedonia-Greece border near the Balkan refugee route.

"Law Of The Journey looks like an inflatable toy that you see in a playground. It's a family featuring females, males and kids. Ai Weiwei uses this technique to convey the very serious subject of migration and escape. This is a symbol of freedom and can also relate to the current context of the Rohingya refugee problem in Thailand at the same time," said Apinan.

"Ai Weiwei stayed in several refugee camps and recorded some video clips of migrations through Calais in France. It's about escape or finding a passage out."

Next room, Peerachai "Samer" Patanapornchai draws secret codes on cardboard for his work, Untitled. For more than 20 years, he has been drawing on the streets of Bangkok, inviting pedestrians to decipher his ideas.

"He gives us the idea of attempting to communicate with people or with something invisible. He talks about astrology or something that's beyond. I think that he desires to release himself. He would shout and try to inform people of something while working. It's like he goes into a trance. His message is that we're in our own trap," Apinan said. 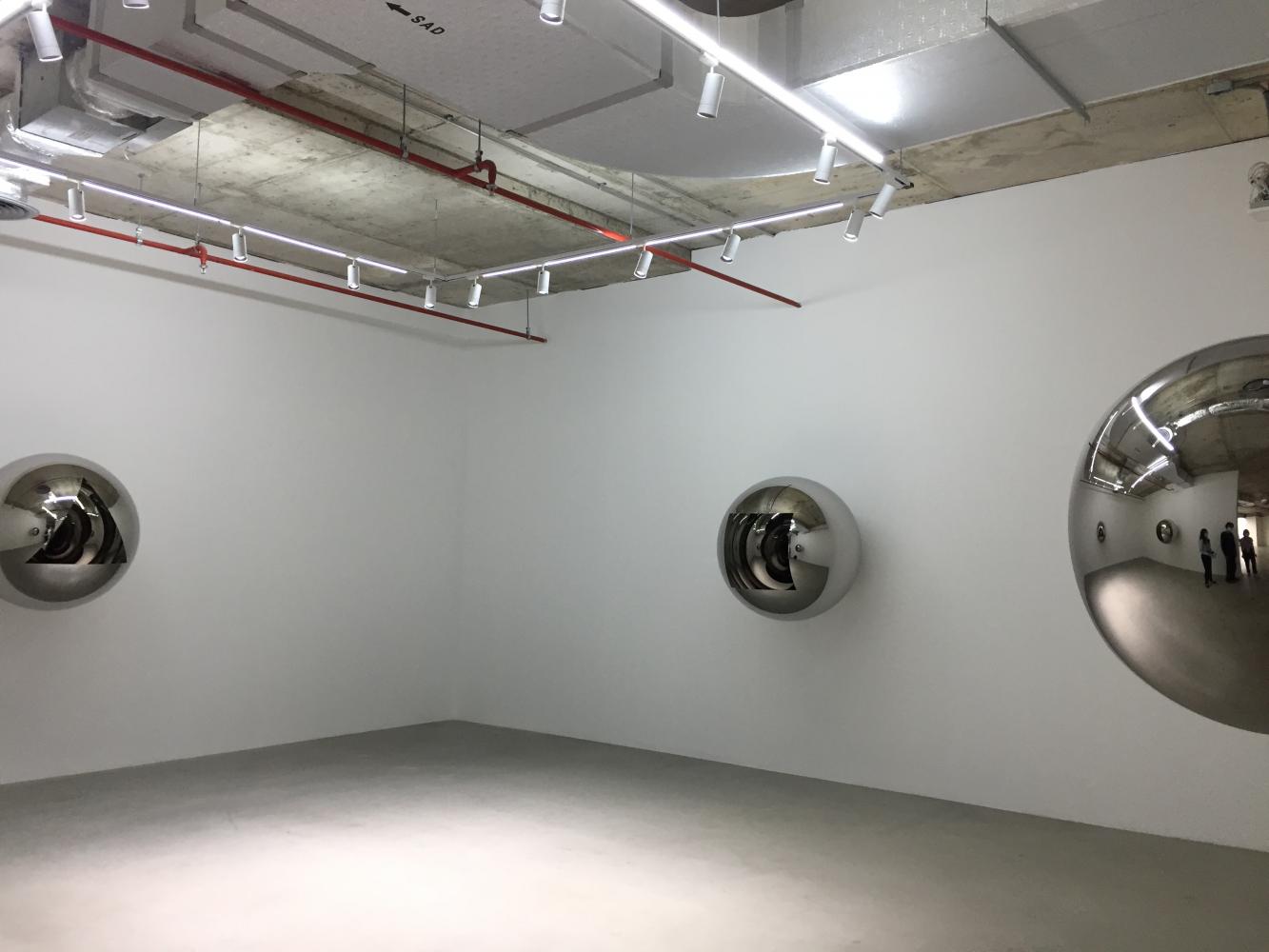 "It took about three months to find him because he has dodged us everywhere. Sometimes, he's been taken away into a home because people feel that he's not stable. But in fact, Samer is a very normal person, who proves that not only an internationally-acclaimed artist can exhibit artwork."

On the 8th floor, Lampu Kansanoh catches the eyes of audiences with eight satirical paintings capturing the way of life and the political situation both in Thailand and other countries. For example, the painting I Feel It Coming depicts a crowd of people looking at the sky, hopefully waiting for something. The painting Please shows Prime Minister Gen Prayut Chan-o-cha standing on the ruins of the city.

"For the BAB 2020, I created 13 paintings, which are displayed at BACC and The Parq, to portray how the Thai lifestyle has changed and what's happening in Thai society. I Feel It Coming represents hope -- people are waiting for vaccines to protect them from Covid-19 or seeking a solution to the current political situation. It depends on how audiences will interpret my work," Lampu said. 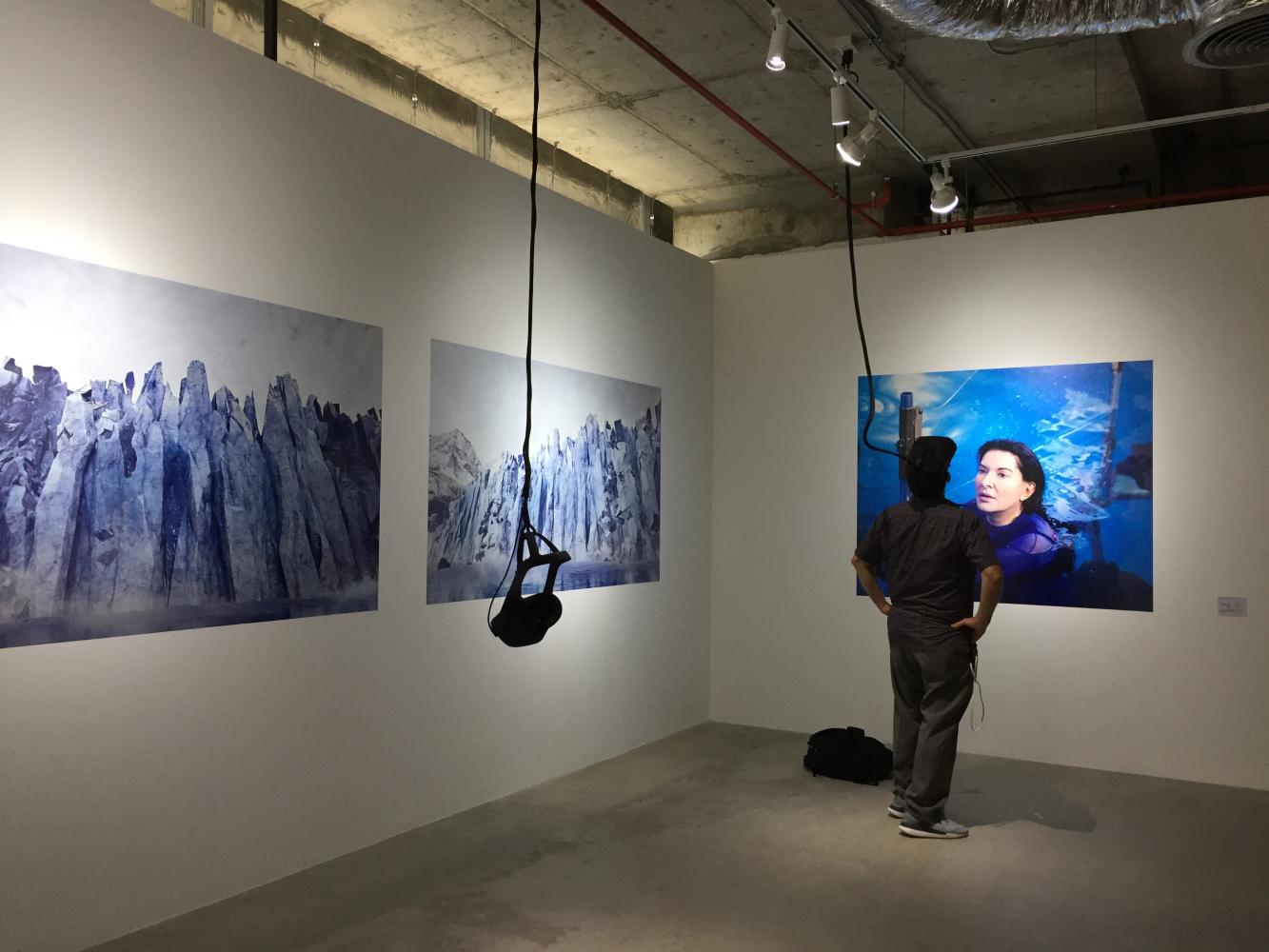 Inspired by Guy de Maupassant's Deux Amis (Two Friends from 1882), it's a story of two rookie soldiers stationed at a garrison as the troops leave for the city to control a protest. They become free, so they go fishing and meet a girl who makes their lives change forever.

Also on display is a collection of 17 tank-like ceramic sculptures Dragonerpanzer (Dragoon Tank) created by veteran artist Wasinburee Supanichvoraparch. His work is influenced by the story of Frederick Augustus I of Saxony (1750-1827), also known as Augustus the Strong, who traded his own newly-minted 600 cavalrymen for 151 Chinese blue-and-white porcelain vases. This symbolises the value exchange that people use to achieve honour and power.

New-wave artist Lu Yang from Shanghai invites visitors to explore heaven and hell in the video game The Great Adventure Of The Material World. This digital fantasy features cyberpunk noir, mind-bending technologies and neuroscientific religion in finding the way to nirvana.

Located on the 15th floor of The Parq, the 1,000m² art space is displaying 25 works from 16 artists. On view is a series of shiny metallic installations Alice and Sphere by world-renowned artist Anish Kapoor. Made from stainless steel, his works create illusionistic effects that take visitors into the inner reaches of the imagination where the dark spaces can be unnervingly changeable.

"He took inspiration from the popular classic novel Alice's Adventures In Wonderland, in which a girl falls through a rabbit hole into a fantasy world and tries to find an exit," Apinan said.

Performance artist Marina Abramovic has used virtual reality technology in creating Rising (2018) to raise awareness of global warming. Players will find themselves stranded in the middle of the Arctic Ocean, while Abramovic is trapped in a glass tank and is struggling to escape when the water rises.

Artist Narongyot Thongyu has turned a mountain of sea debris into artwork called A Child's World In The Days Of Adults (2018). To evoke childhood memories, he collected cigarette butts, slippers, fishing buoys, plastic bottles and toothbrushes from the beaches in his hometown Songkhla to make puppet-like toys. They represent the need to escape the feeling of isolation that is a result of daily life and migration.

Bangkok Art Biennale 2020 continues until Jan 31 and works on the 9th floor of the BACC are on display until Nov 29. For more details, visit bkkartbiennale.com.

Fans Tuk Up tuk-tuk cause