Nowhere else to turn

published : 10 Nov 2020 at 06:20
newspaper section: Life
writer: Suwitcha Chaiyong
A student displays a message saying ‘Umbrella is not a weapon’, ridiculing critics who have accused them of carrying weapons during a rally on Oct 19, 2020. (Photo by Varuth Hirunyatheb)

Panaya Hasitabhan and her son Talay fought for two days over the ongoing months-long youth rallies. Talay felt it was unfair for the protesters to be sprayed with water cannons while his mother defended the action.

"When I asked my son about the purpose of the young protesters, he couldn't answer. I told him to find more information from both sides. He later showed me more information and we talked about it," Panaya said.

In the end, the mother learnt to listen. "In the past, I felt that he argued with me, so I tried to use my authority when he spoke up. My son complained that I didn't listen to his reasons. Today, I realise that I have to listen to him." 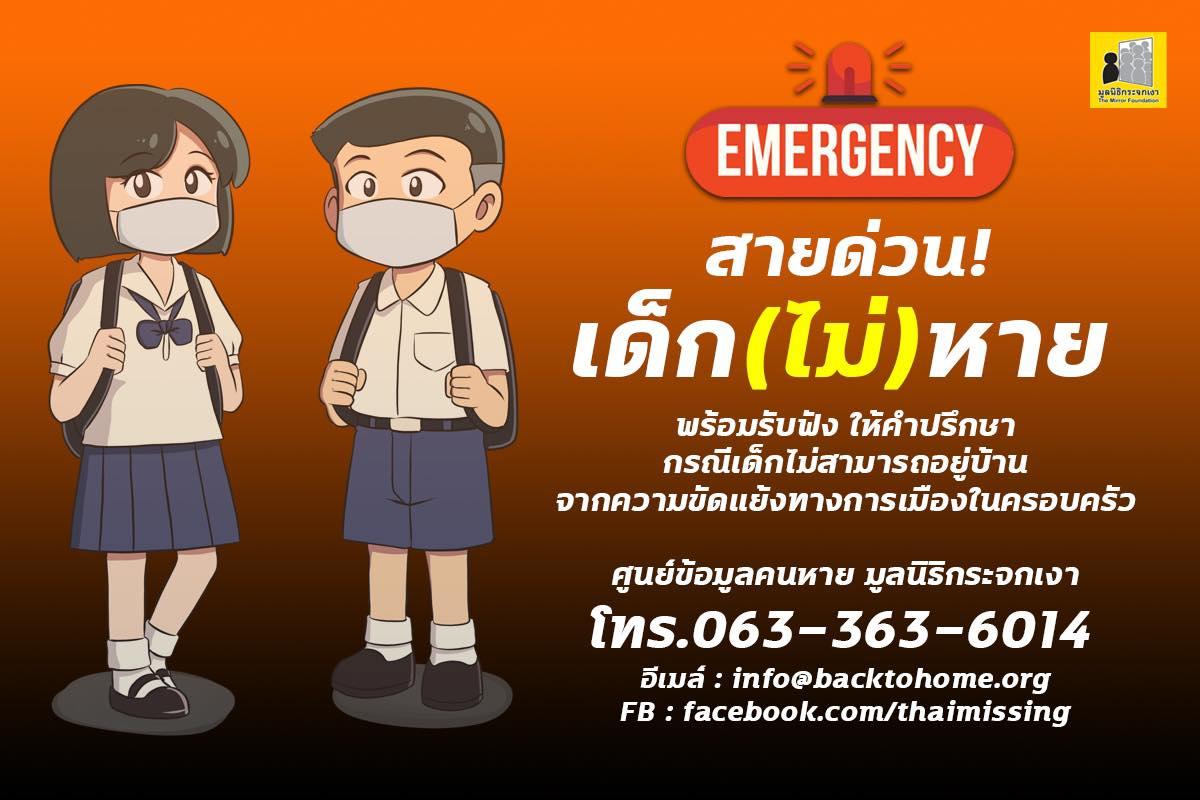 The old adage says you should never discuss religion, politics or money at family gatherings. Today, politics is the hot-button topic the world over, but especially in Thailand where not every parent is as understanding as Panaya. Reportedly, there is an increasing number of cases of students being kicked out of the house by their parents over their political views.

"I am a university student who got kicked out of my house by my parents due to our different views in politics. Now, I'm looking for a job."

"I got kicked out of the house because I went to the protest. What should I do? I don't have a place to stay."

These are just two social media posts by young people who clashed with their parents over politics. In response, the Mirror Foundation has begun providing assistance to young people who leave or are kicked out of their home due to political differences. The foundation's director Eaklak Loomchomkhae explained the campaign began after young protesters were blasted by water cannon on Oct 16, and many people reported to the foundation that their friends or family members were missing.

"They couldn't contact their friends or family members for many reasons such as their phones got wet or ran out of battery. Then, many posts began appearing online that said young people argued with their parents and didn't want to stay at home. As an organisation working for missing people, we thought we should open a safe space for young people where they can express their opinions. When young people, especially those who are under 18, are forced to stay outside their homes, they become vulnerable and very possibly surrounded by danger," said Eaklak. 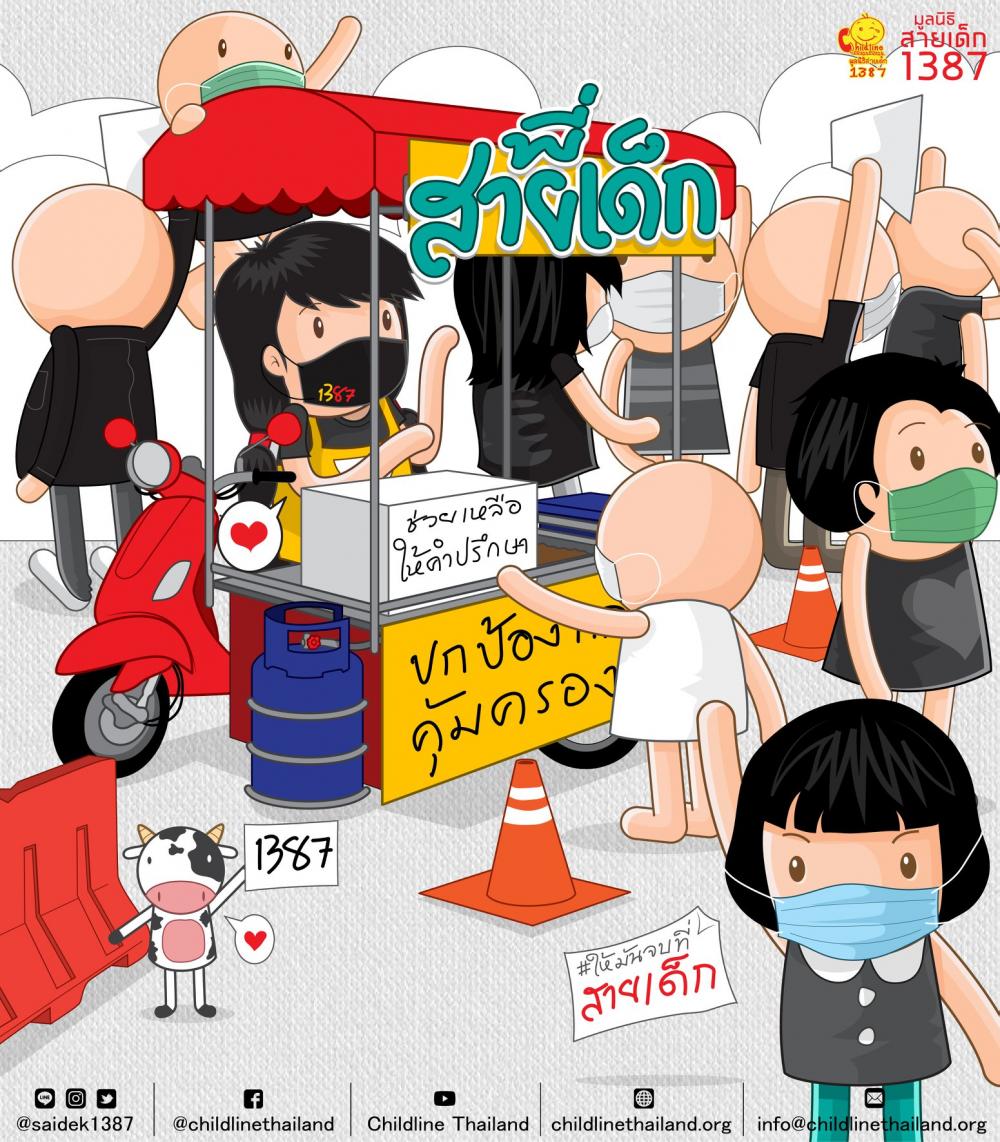 Aside from the Mirror Foundation, Childline Thailand Foundation's hotline 1387 is also ready to help young protesters. Childline focuses on helping youngsters under 18.

"Our campaign says that we are available to help young people anytime. Some young people wanted to pursue their right to be heard, which led to problems with parents who have different viewpoints, and some got kicked out because of a breakdown of communication in their families. We talk to them and try to assess their skills and their abilities in order to help them deal with the situation in their own ways," said Ilya Smirnoff, director of the Childline Thailand Foundation.

With rallies held every day, both foundations have helped about 10 students who were kicked out of their homes and had nowhere else to go.

"During an argument, it is all about temper. Each side wants to win the argument, so people say things they don't mean in order to keep the other side silent. Some parents question why their children have different views from them without listening to their children's reasons. Also, parents are worried that their children will be at risk at the protest or could be arrested. When we asked how they feel if their children face dangers outside their home, they realise that they want to stay together as a family," said Eaklak.

"I have empathy for parents who kick their children out. I understand that some of them didn't know how to stop their children from going to the protest and some children are very stubborn. Parents are always worried about their children. However, kicking them out is to push them away," Panaya said.

Eight people who contacted the Mirror Foundation were able to reconcile with their families after foundation staff intervened. However, in one case, the Childline Thailand Foundation found a girl had experienced domestic violence as well.

"The girl said when her parents didn't like something, they became violent. It could be about politics or a boyfriend, and when they don't like something, they try to control her behaviour by using violence. However, controlling and violent methods are pushing her away. The girl eventually returned home. We offered the assistance of a social worker to help her further, but she said she is now fine and will contact us when she has any problems. We have to respect that. If we go against her will, she probably won't talk to us," said Smirnoff.

Even though the young people in the above cases received help and returned home, the foundations believe that there are more youngsters who haven't received help yet. In addition to listening and trying to help them reconcile with their parents, the foundations can help them find temporary shelter. While the Mirror Foundation has its network that can provide legal shelter for minors, the Childline Foundation prefers to place the child with another family member or close friend.

"It is always better to find a supportive network within the immediate environment of the child such as their extended families, their relatives and friends of the families. It is an option that children will be happy with and feel safe," said Smirnoff.

The protests have led to arrests, injuries and implacable arguments between parents and their teenaged and adult children, leaving some to ask is it worth it? Should young people get involved in politics?

"Politics are around us. Students vote for their student representative and school president. Parents should keep an open mind and young people, in turn, should respect their parents' opinion. There was a girl who wanted to go to a protest and after some discussion, her parents agreed to accompany her during daytime for her safety," said Eaklak.

"It is a question that young people decide for themselves, what their goal is and how far they want to get involved with politics and the protests. For some people who still need support from their parents [and their parents disapprove of the protests], they may need to stop thinking about the protests for now," said Jinda Chaipon of Childline. 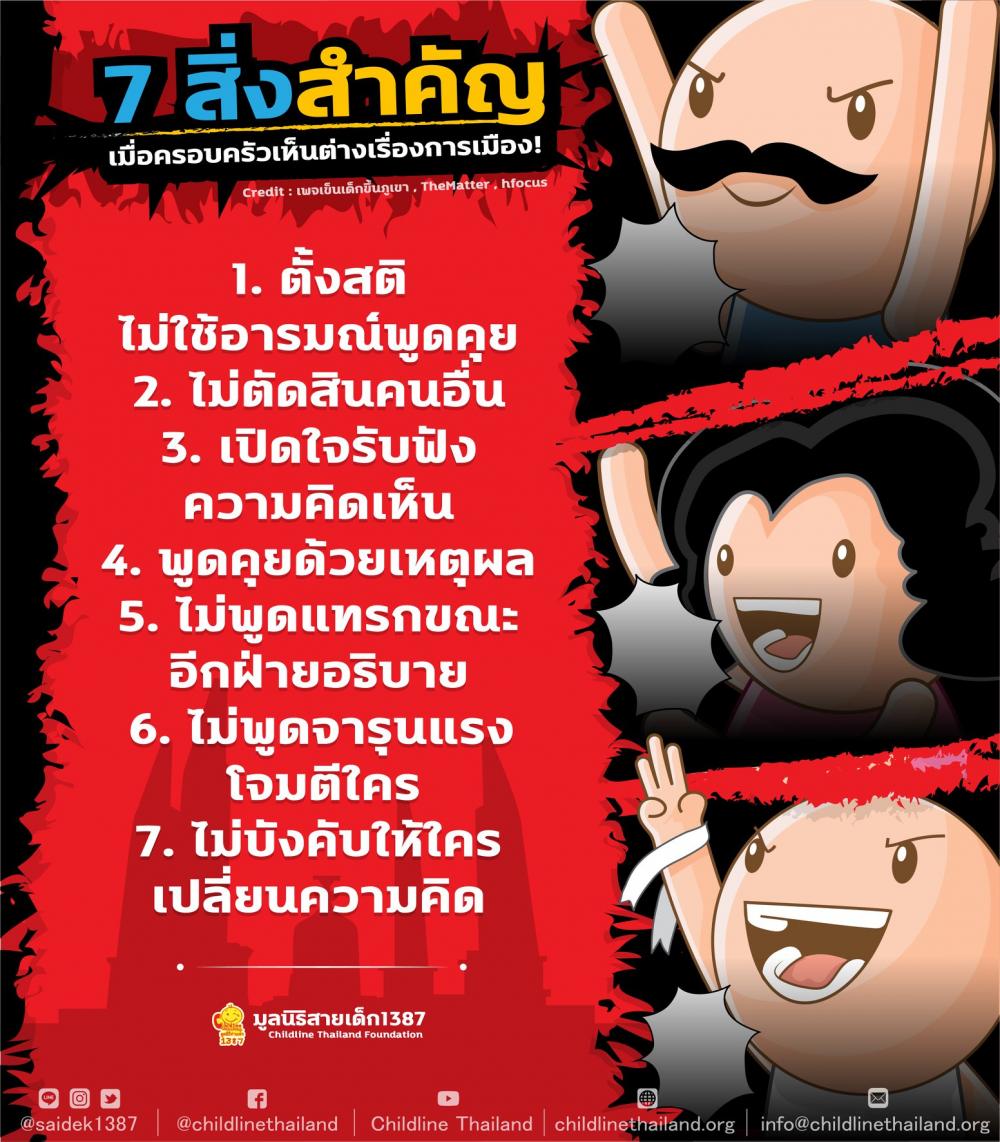 To prevent other families from having conflicts and young people from wandering the streets, foundation representatives advise family members to control their temper while discussing politics.

"Both sides should try to keep calm and find an appropriate time and place to talk about such issues," said Smirnoff.

"Each family knows how to communicate with each other. Don't try to change the other side's viewpoint. Don't be emotional and try to look at the other side's reasoning. While parents are worried about risk and possible violation of the law, young people are looking forward to a change for the future," said Eaklak.