To a cleaner and cooler Bangkok

Sparkling canals, soothing green spaces and a shiny new monorail promise to change the scenery of Bangkok. Guru presents a rundown of the plans to clean canals, increase park spaces and the launch of a new monorail line.

Many of us might feel that the renewal projects in the city have lofty goals that are seldom reached. So it is delightful to see the success achieved by the Bangkok Metropolitan Administration (BMA) in the do-over of the Klong Ong Ang. 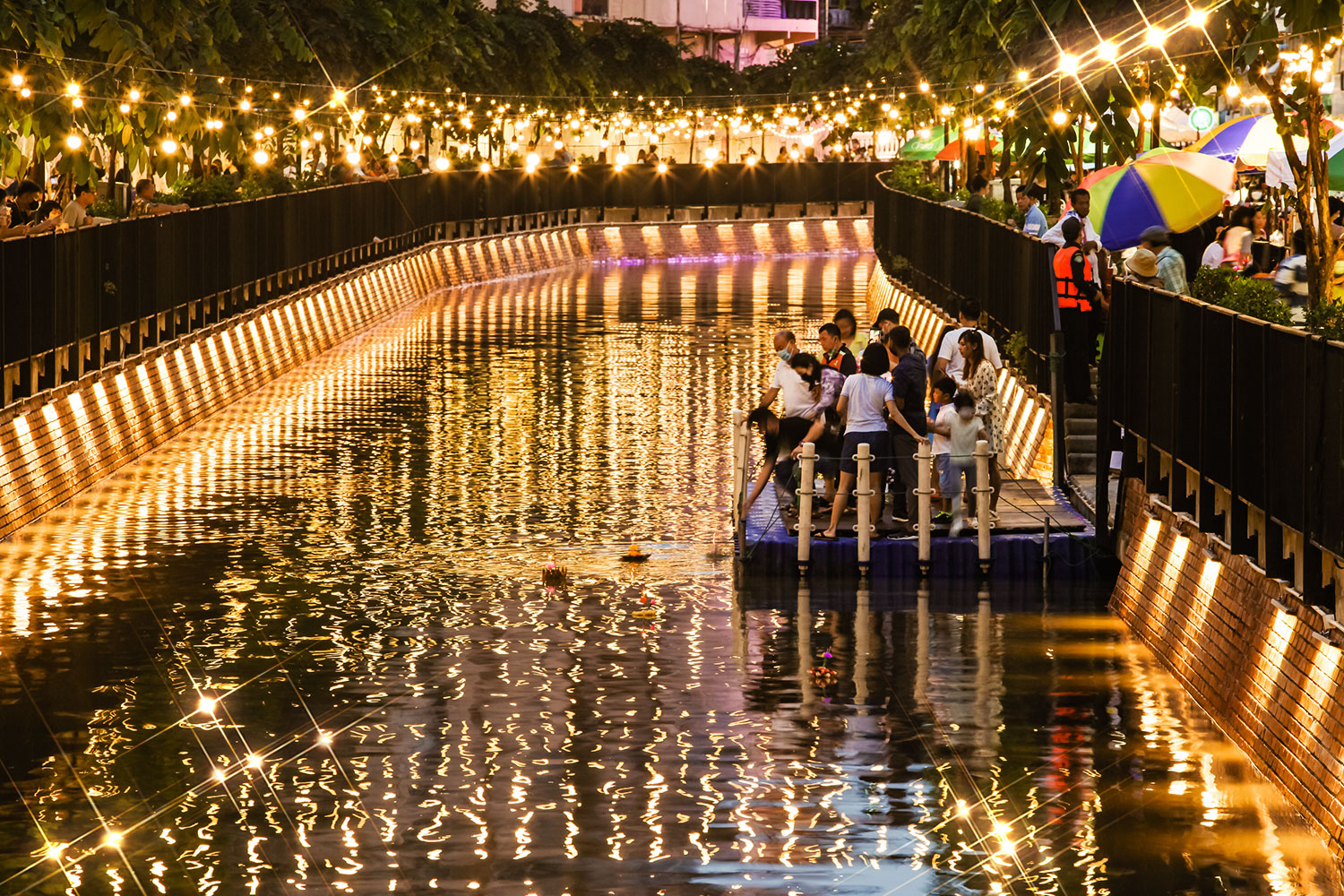 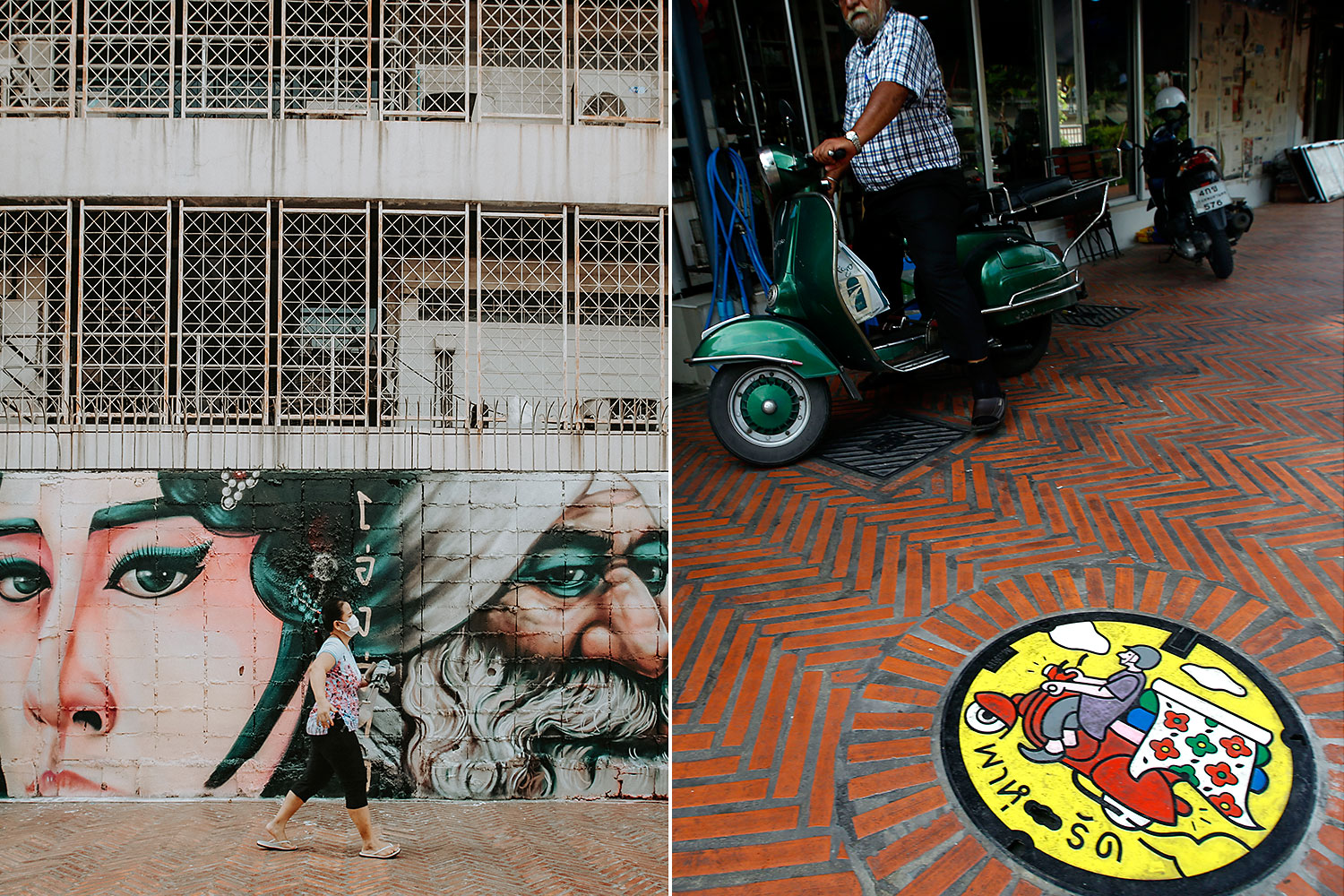 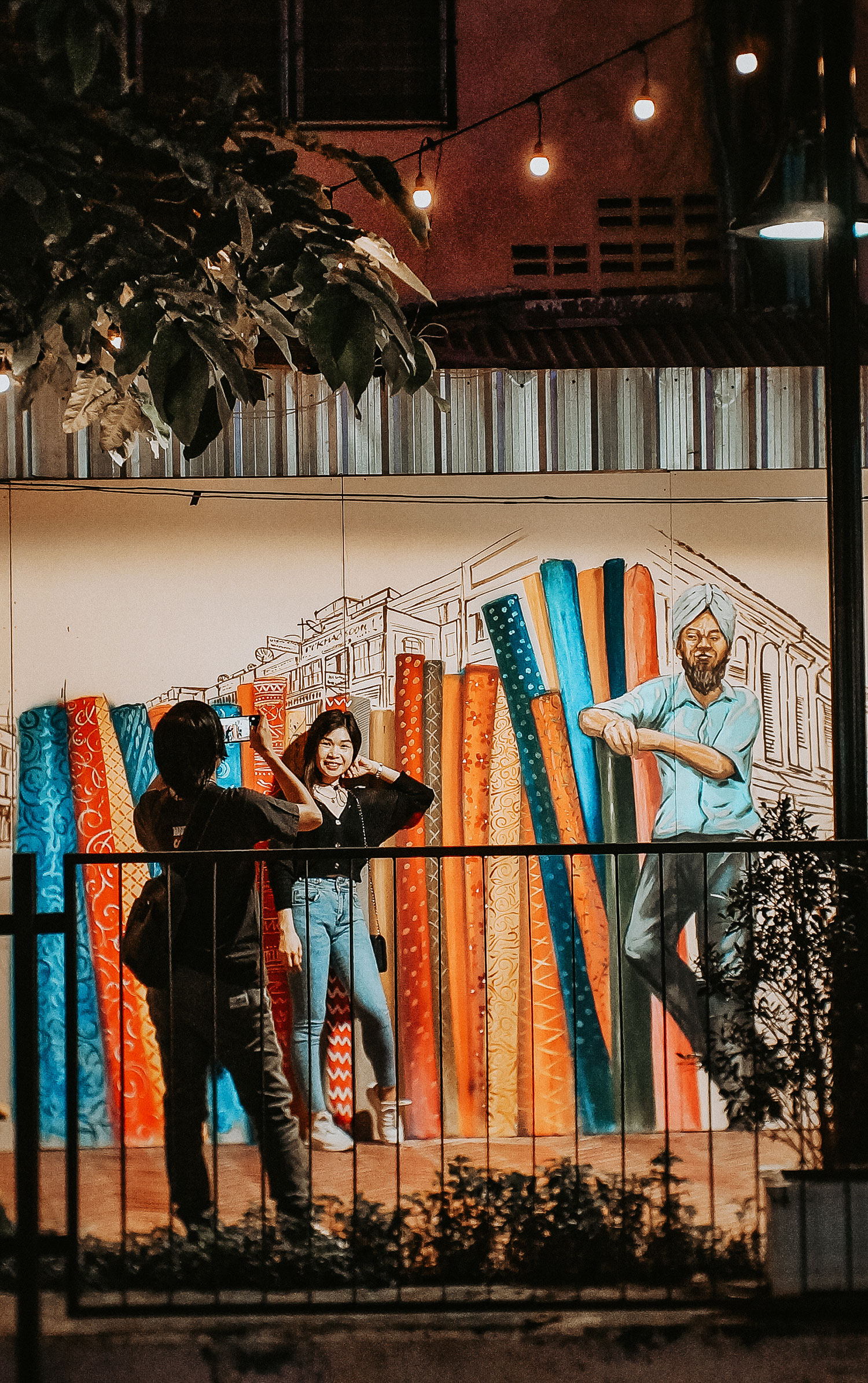 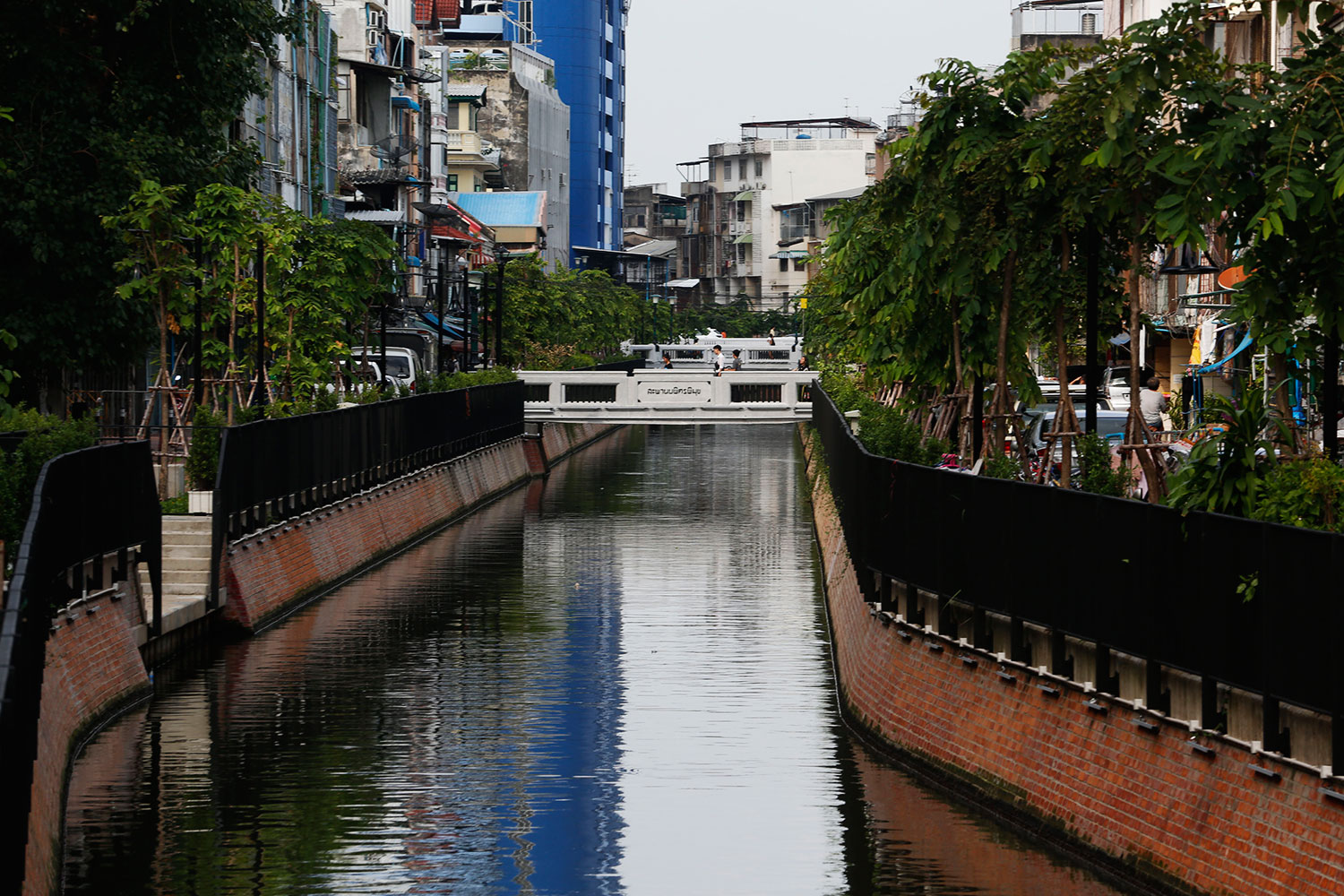 More than 200 years old, the canal stretching 750m was developed under the order of King Rama I in 1783. It served as a moat around the palace and also as a market where people sold goods in boats. With so much history, it is no wonder that the canal was designated to be an area of conservation by the Cabinet in 1997. However, looking at the canal's banks and its steel bridge (Saphan Lek) at that time, your first thought would not have been that it was a historical site. They were crammed with vendors, who were selling not only toys and electronic goods but also pirated video games and CDs. Moreover, the water in the canal had become badly polluted and smelled foul.

The BMA decided to emulate the success that the Koreans had with the Cheonggyecheon Restoration Project in Seoul, which turned a once-neglected canal into a famous riverside landmark. To make way for BMA's improvement plans, hundreds of market stalls at the Saphan Lek Market were asked to leave in October 2015 and about 500 structures were demolished.

Fast forward to the present and we can see how Klong Ong Ang has almost been restored to its early day glory. There are already vast improvements on the canal landscape. The city workers have created walkways along the canal, lined with shady trees and CCTV cameras for public protection. These days, the canal hosts traditional festivals, like Loy Kratong, since the water is clean enough for people to consider going close.

Visitors can head over to the canal from Friday to Sunday every week to check out the street stalls set up along the walkway and the street art, which illustrates the history of the neighbourhood. The Klong Ong Ang walking street opens from 4-10pm.

Since Prime Minister Prayut Chan-o-cha began the effort to clean up the Saen Saep Canal in 2015 and regulations on wastewater treatment were tightened by the Pollution Control Department, the water quality of the 72km-long canal seems to have improved. Due to more effective enforcement, the Biochemical Oxygen Demand measurement in the canal has decreased by 2,800kg, as reported by the Pollution Control Department in June 2019. 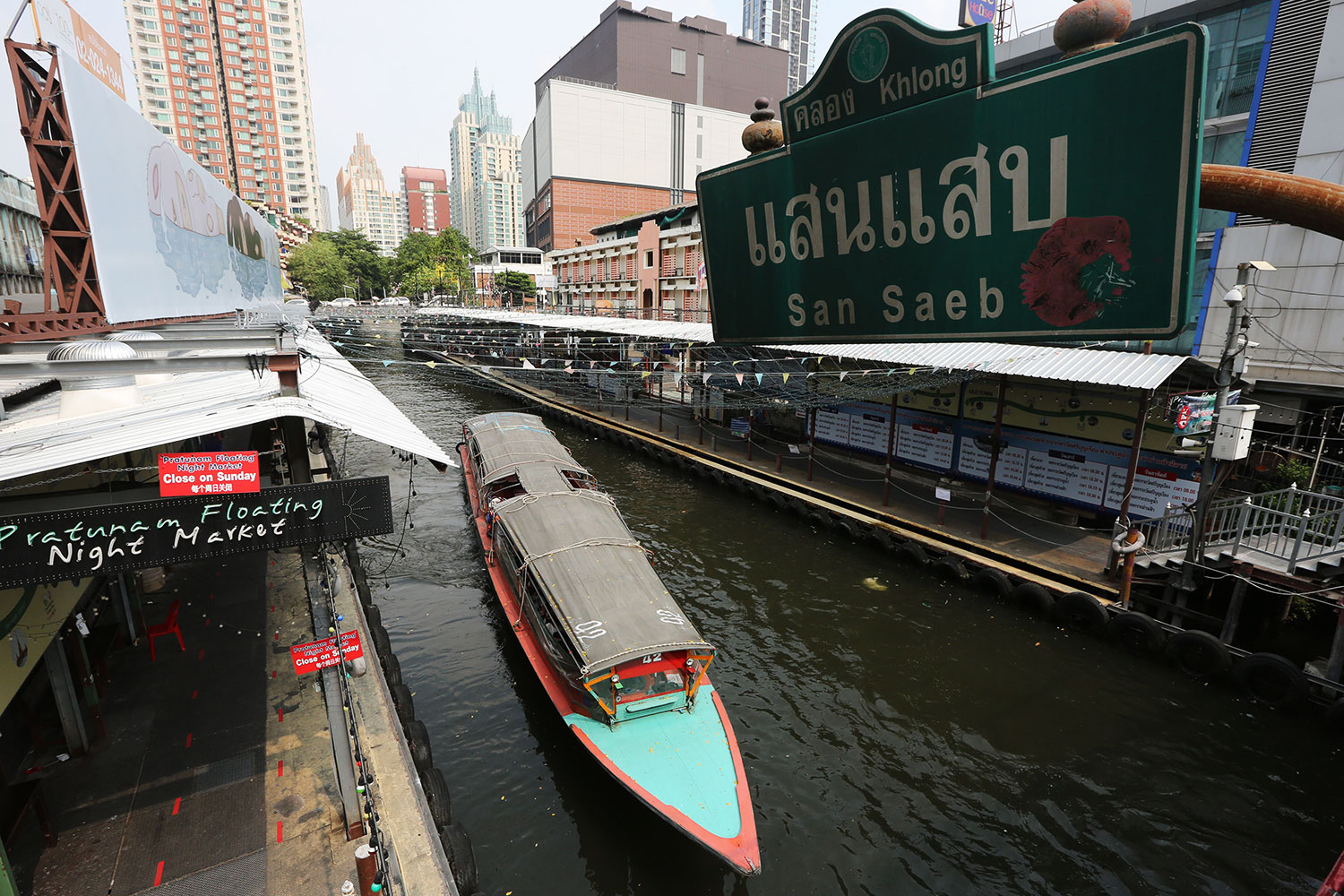 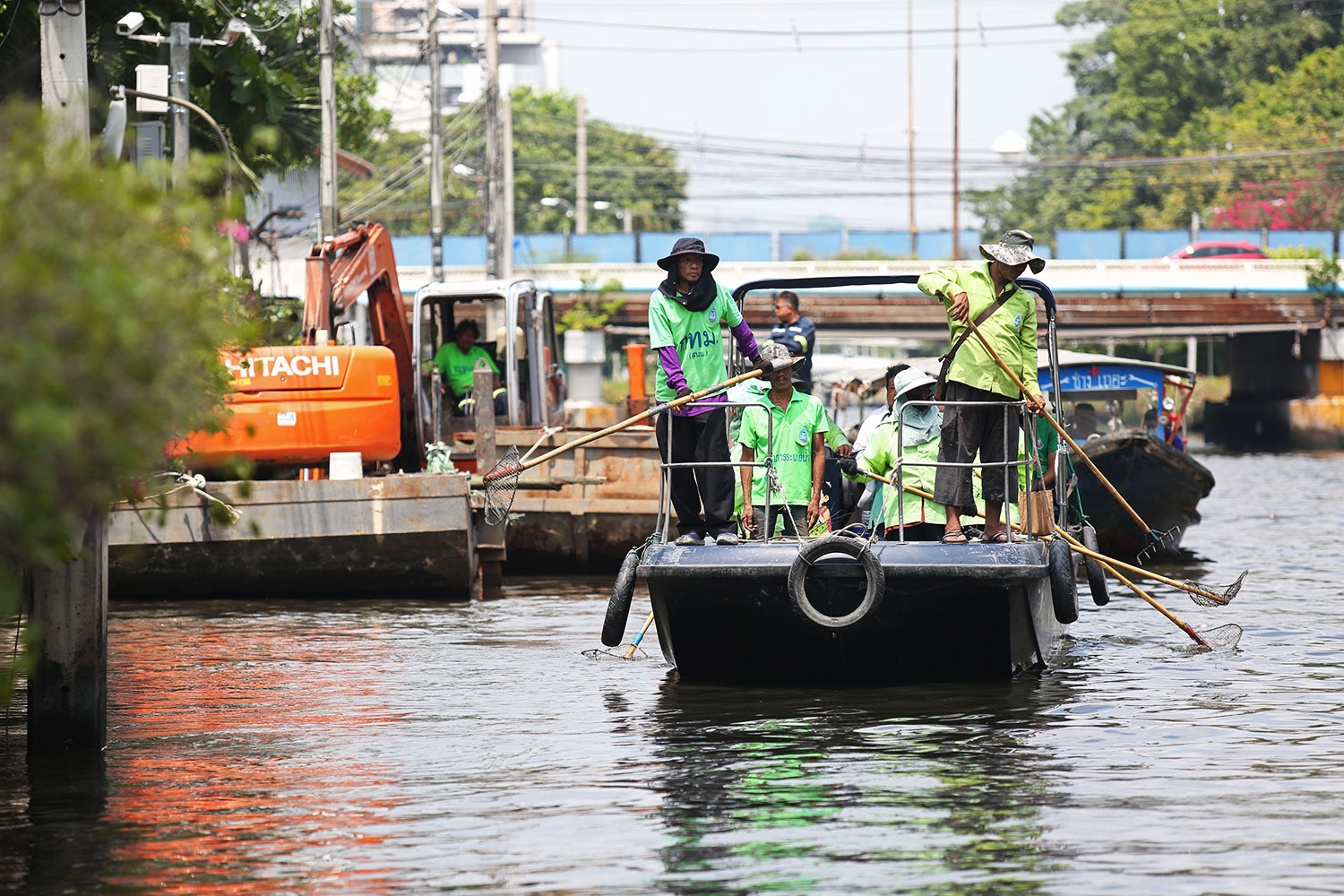 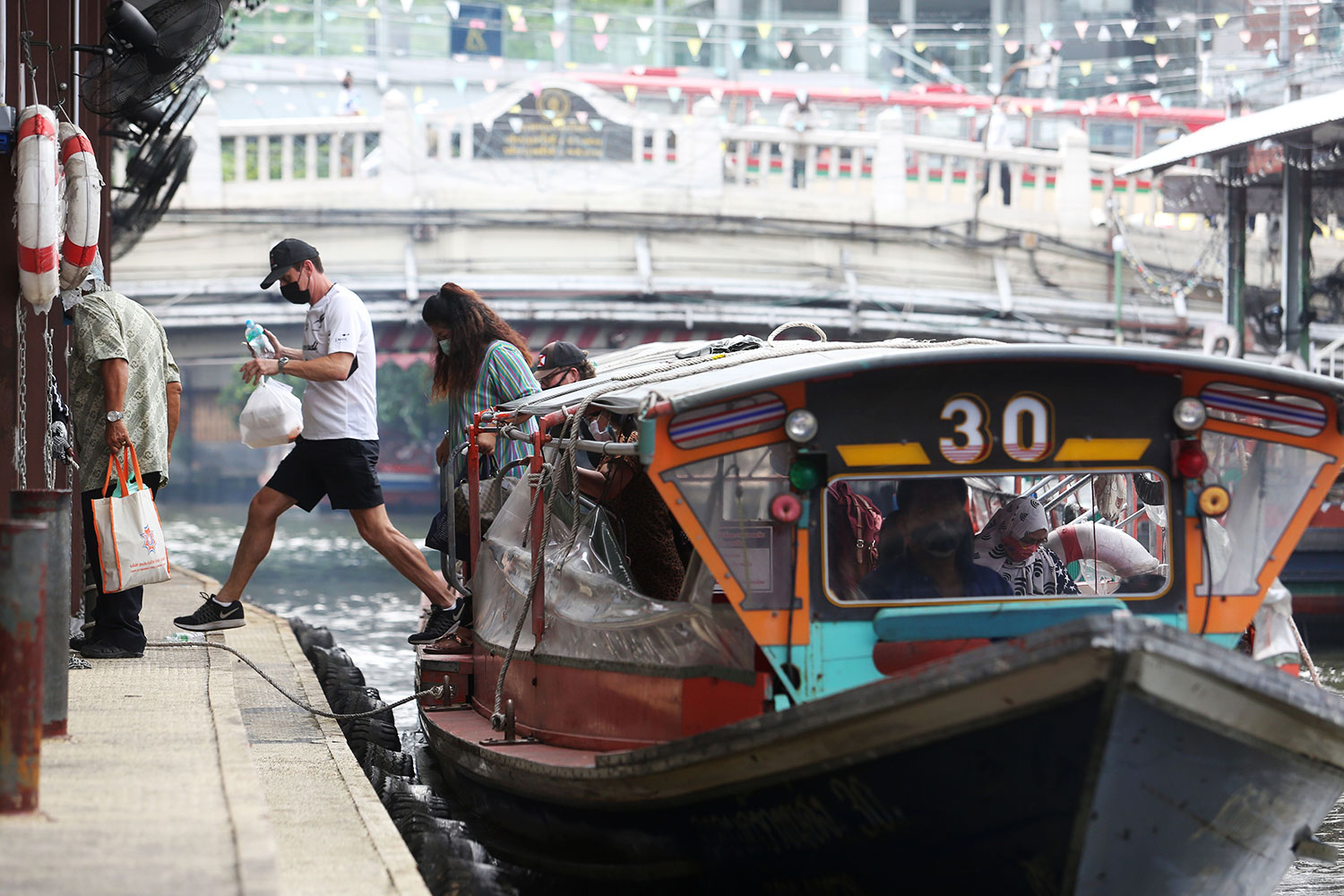 On Sept 2, 2020, during a site visit to follow up on the progress made in the clean-up of the Saen Saep Canal, Bangkok Governor Aswin Kwanmuang, said that the BMA had solved the water pollution problem there by treating wastewater using a large water quality control plant. The plant continuously processes wastewater from households, communities, and businesses located along the canal and its branch canals. The BMA has also collaborated with other government agencies to set a long-term plan to develop and rehabilitate the Saen Saep Canal. The plan is divided into three phases and the final phase is expected to reach completion in 2031. It involves nine large construction projects that include a reinforced concrete dam, a wastewater treatment system and a large wastewater collection system that will cover all areas of the Saen Saep Canal, as well as its branches.

The Chong Nonsi Canal was intended as a place for floodwaters from Bang Rak, Sathon and Yannawa districts to flow into, before eventually heading out to the Chao Phraya River. However, with all the trash that clogs it, it seems unlikely that the canal can take more of anything. The Bangkok Metropolitan Administration wants this to change. They have set in motion a two-phased project, spearheaded by their Department of Drainage and Sewerage, to develop the downtown canal into a new tourist attraction by April. Key goals during the first phase include removal of debris and making the surrounding landscape clean and attractive. The second, longer phase involves upgrading the water systems, drains and sewers associated with the canal. 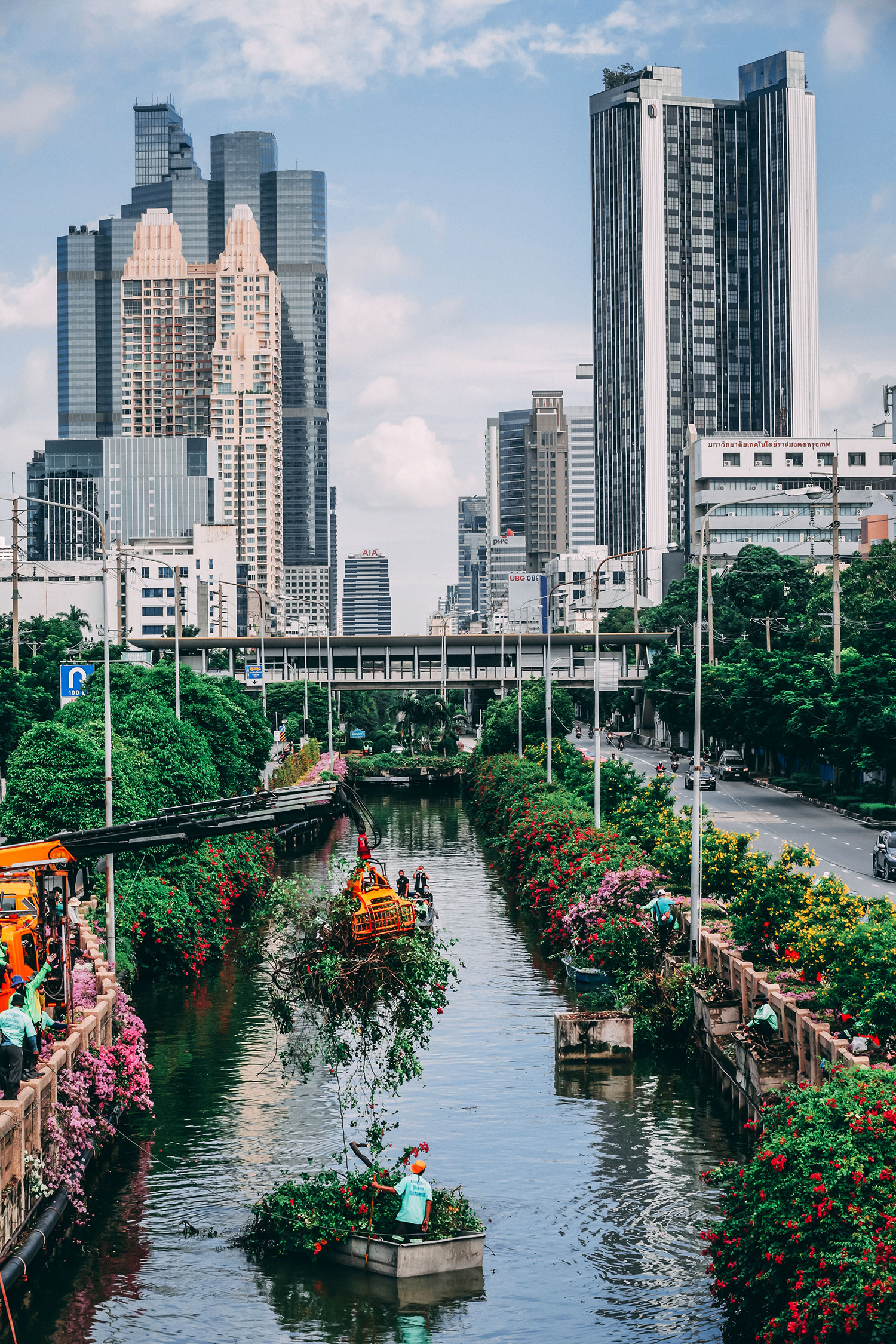 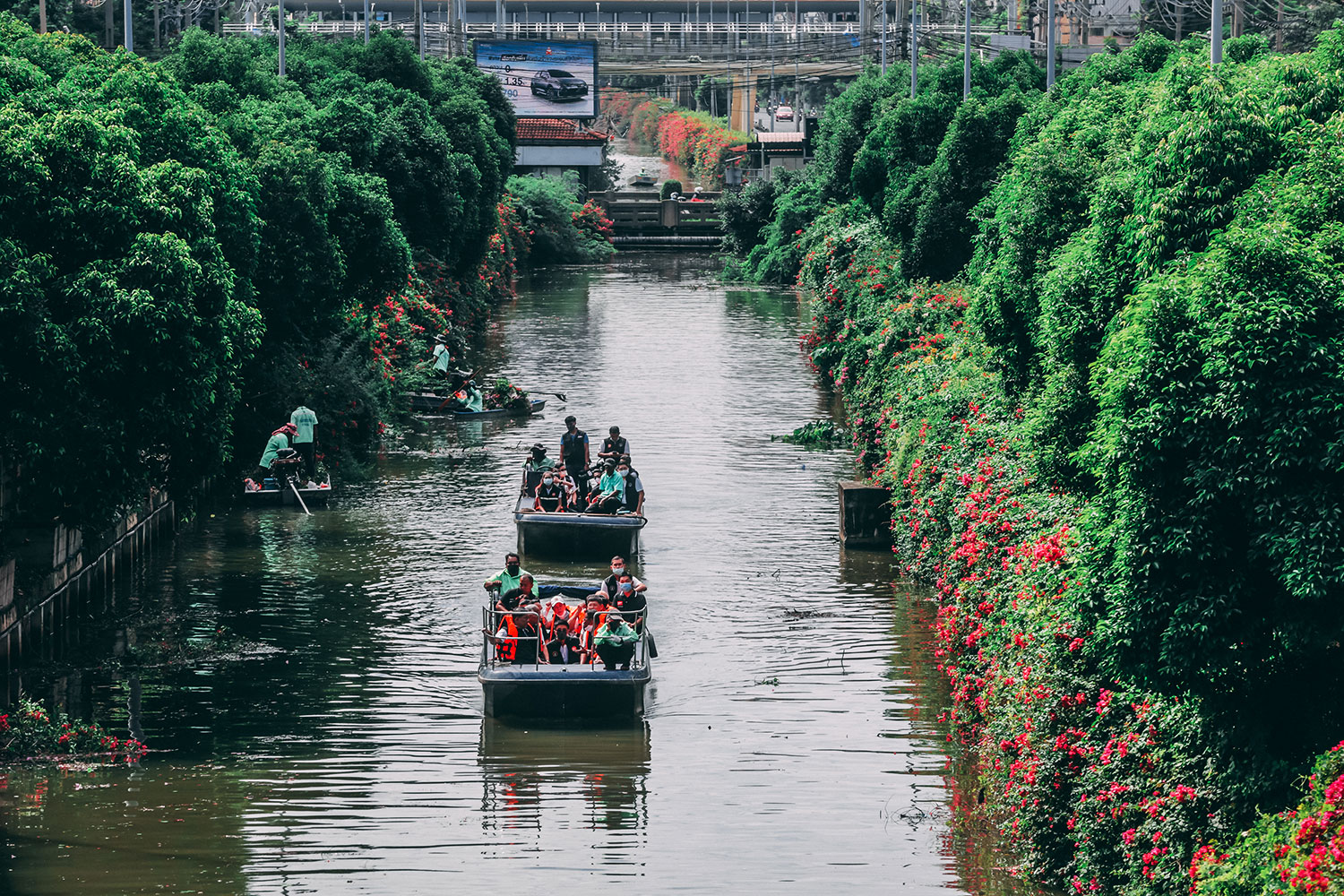 The new walkways that are planned for the canal would be wider so as to encourage pedestrian flow and are expected to be ready by April 2021. Private companies and retail stores in the area will be contributing to the cost of building these walkways, with the BMA stepping in only if there is a shortfall. Individuals and the public are also encouraged to avoid polluting the canal, especially with oils and fats.

Once this project is completed, business surrounding the canal is anticipated to improve and hence enhance the lives of the residents. It could also become a gleaming example for future developments of neglected areas.

Developed by the BMA's Department of City Planning and Urban Development, the Chao Phraya Sky Park is the world's first public park that is across a river. Offering a 360-degree view of the Chao Phraya River, it is located between the driving lanes of the Phra Pok Klao Bridge. The 280m-long and 8.5m-wide park was converted from the Lavalin electric train track that lay unfinished and abandoned for more than 30 years. The BMA has collaborated with the Expressway Authority of Thailand (EXAT) and the Urban Design and Development Center (UDDC) on this regeneration project and hopes that the park will become a new Bangkok landmark that will attract more visitors. 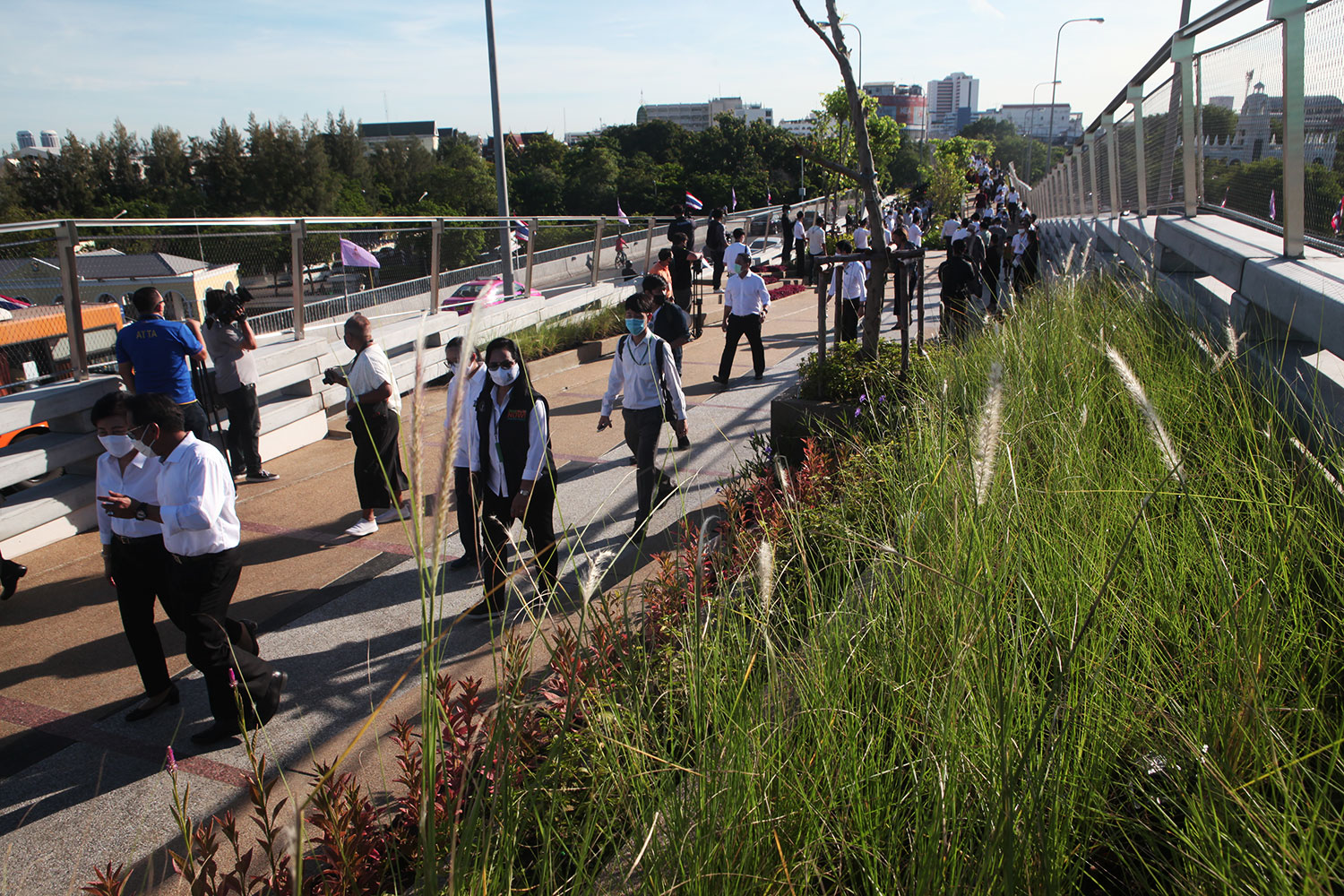 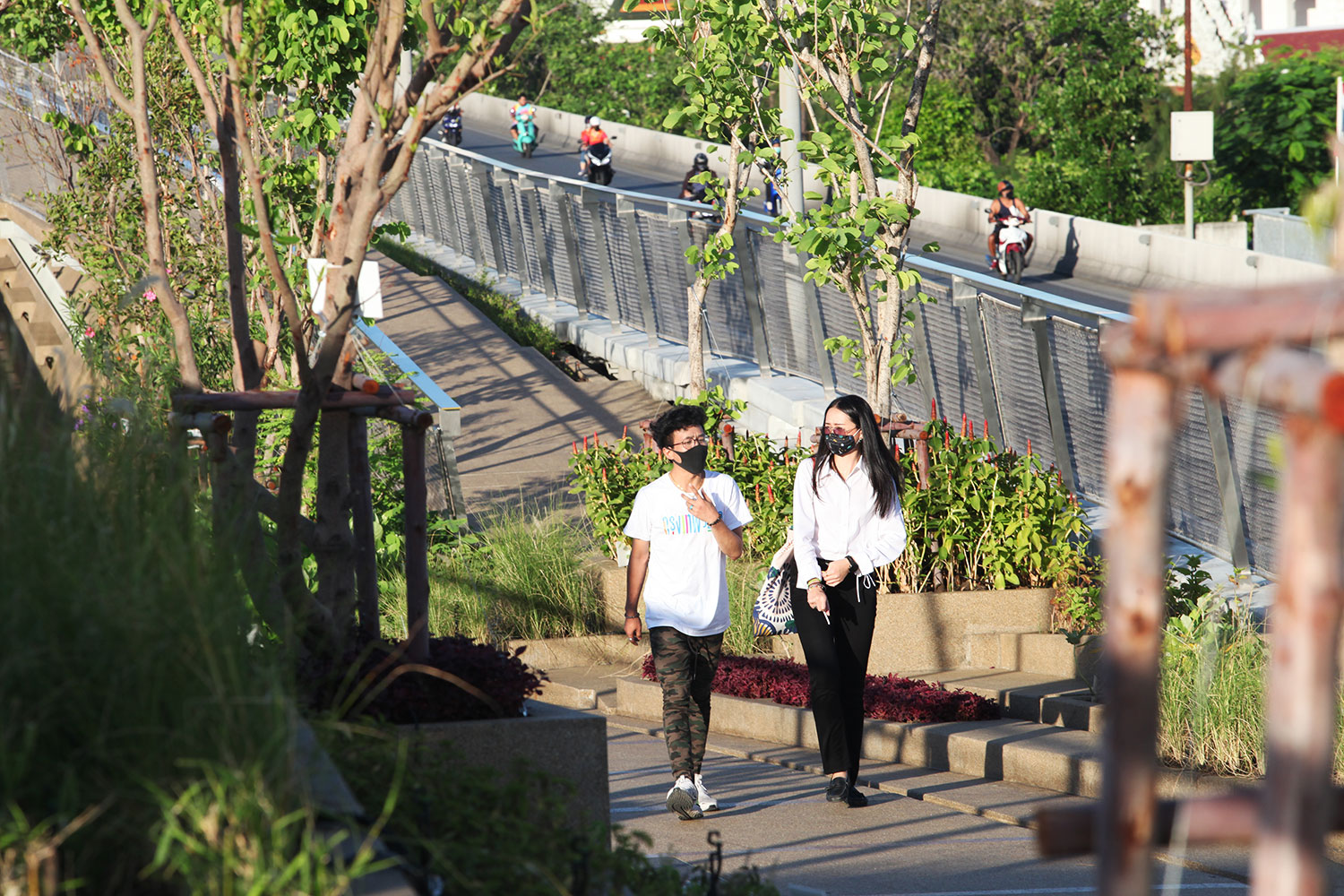 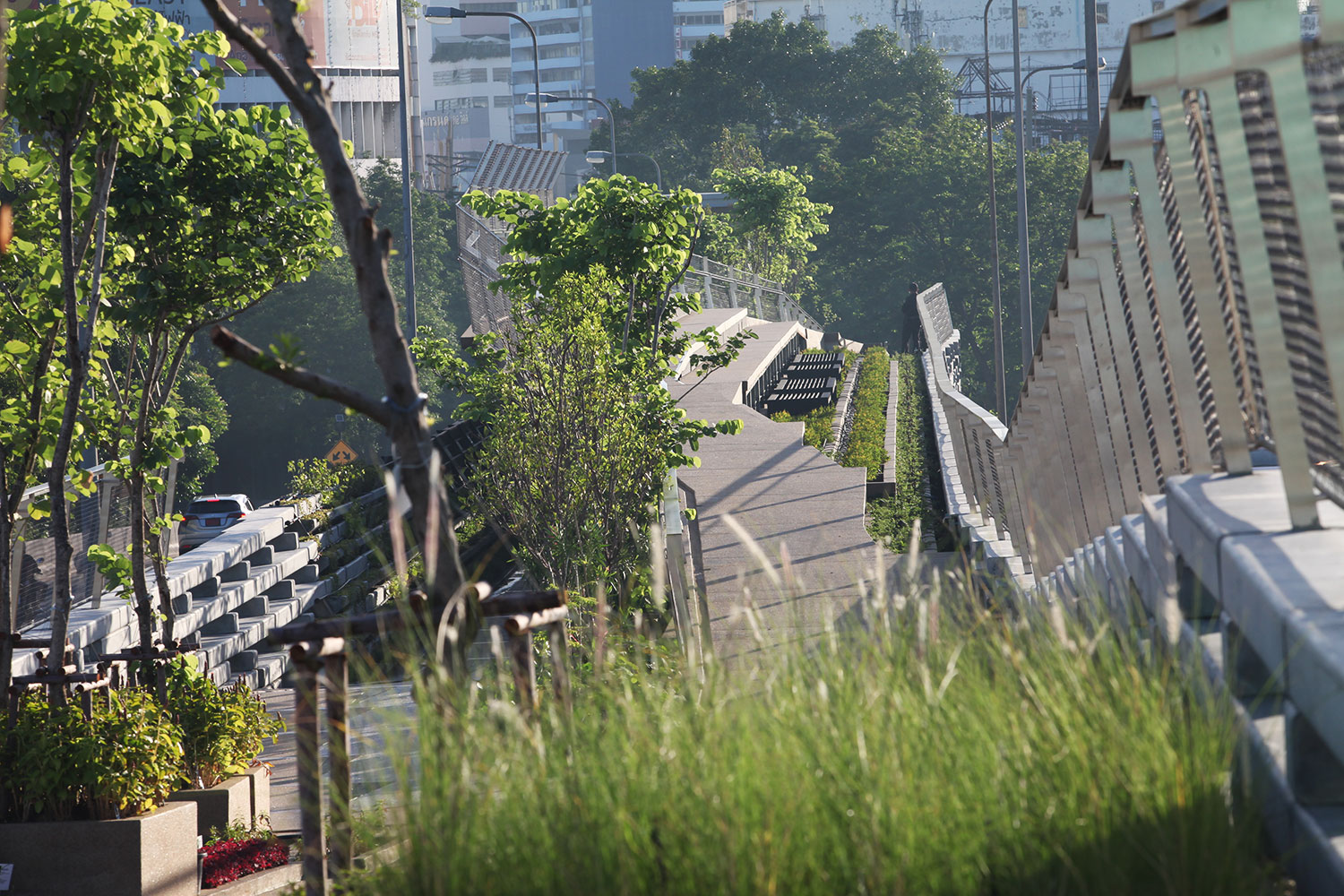 The sky park covers an area of 22,400m² and comprises leisure spots, viewpoints, footpaths of varying heights and an elevator for the disabled and senior citizens. Although there are no large trees in the park due to the physical limitations of the bridge, visitors will notice a variety of local plants, like the Siamese Acalypha and crown flowers. Note to cyclists: your are not allowed to ride your bicycle in the park, but you can walk it to the other side.

The park is open daily from 5am-8pm and is near MRT Sanam Chai Station on the Blue Line. Visitors can also get there by catching the Chao Phraya Express Boat from Saphan Phut Pier (only Orange Flag express boats) or a fixed-route ferry (local line without flag). In addition, buses 3, 7A, 9, 42, 8, 73, 73A and 82 go to the park.

In December 2019, Aswin announced Green Bangkok 2030, a project that would see engagements between the BMA, other government agencies, private organisations and educational institutions, to increase trees and sustainable green spaces by 2030. The areas that have been targeted are vacant lands, areas under expressways and spaces along railroads and sidewalks. The project will also see more trees planted to provide more shade and to trap dust from the air. 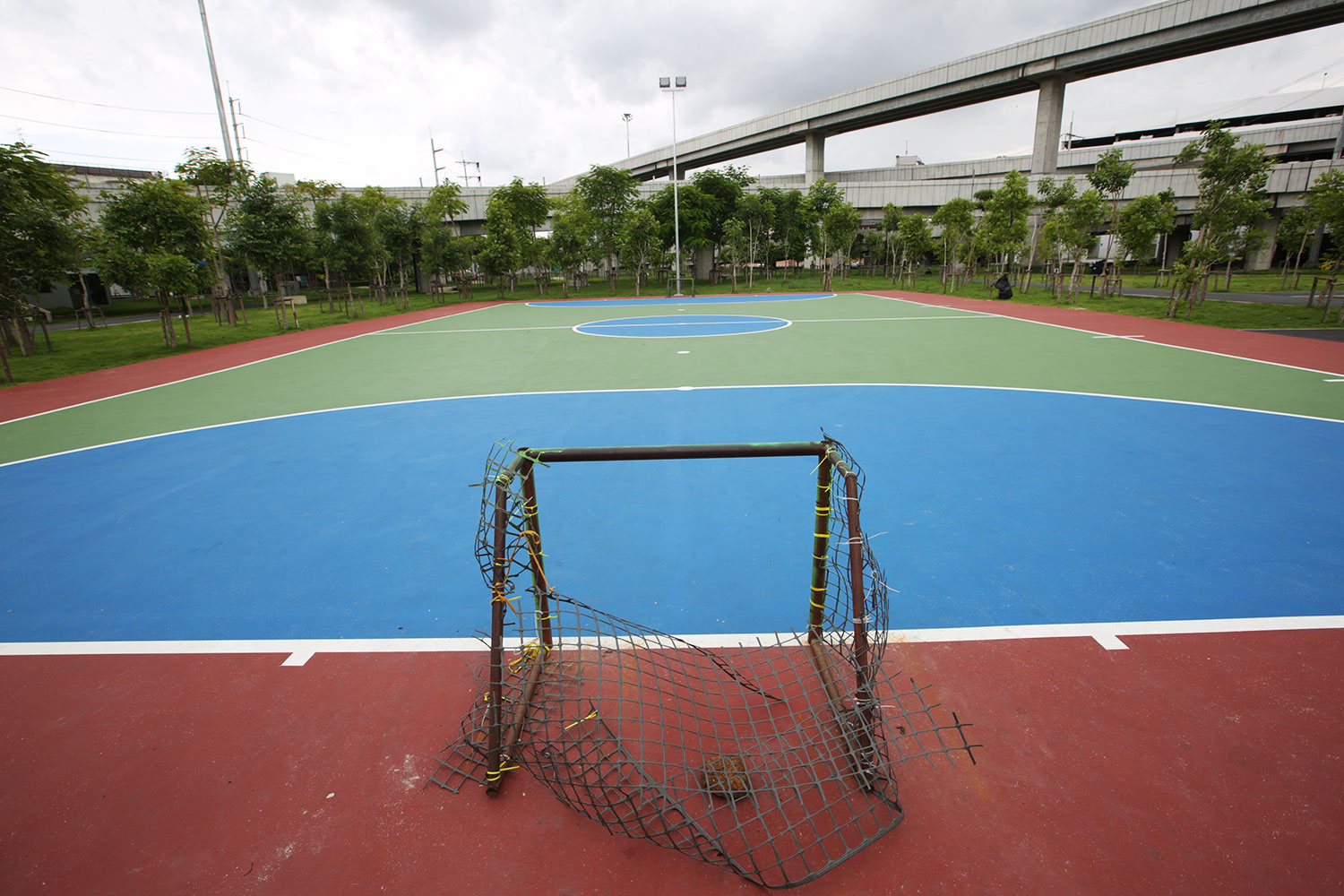 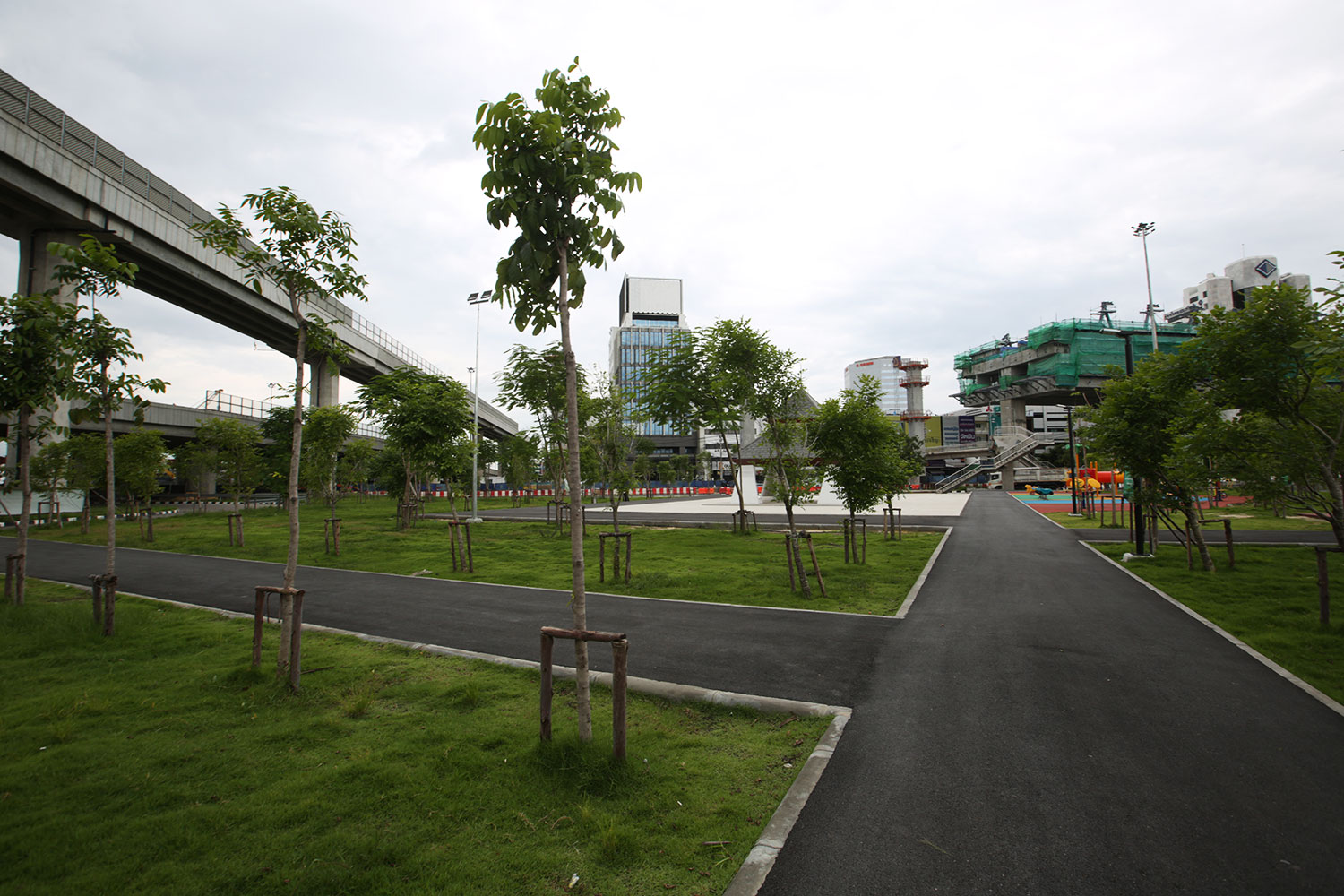 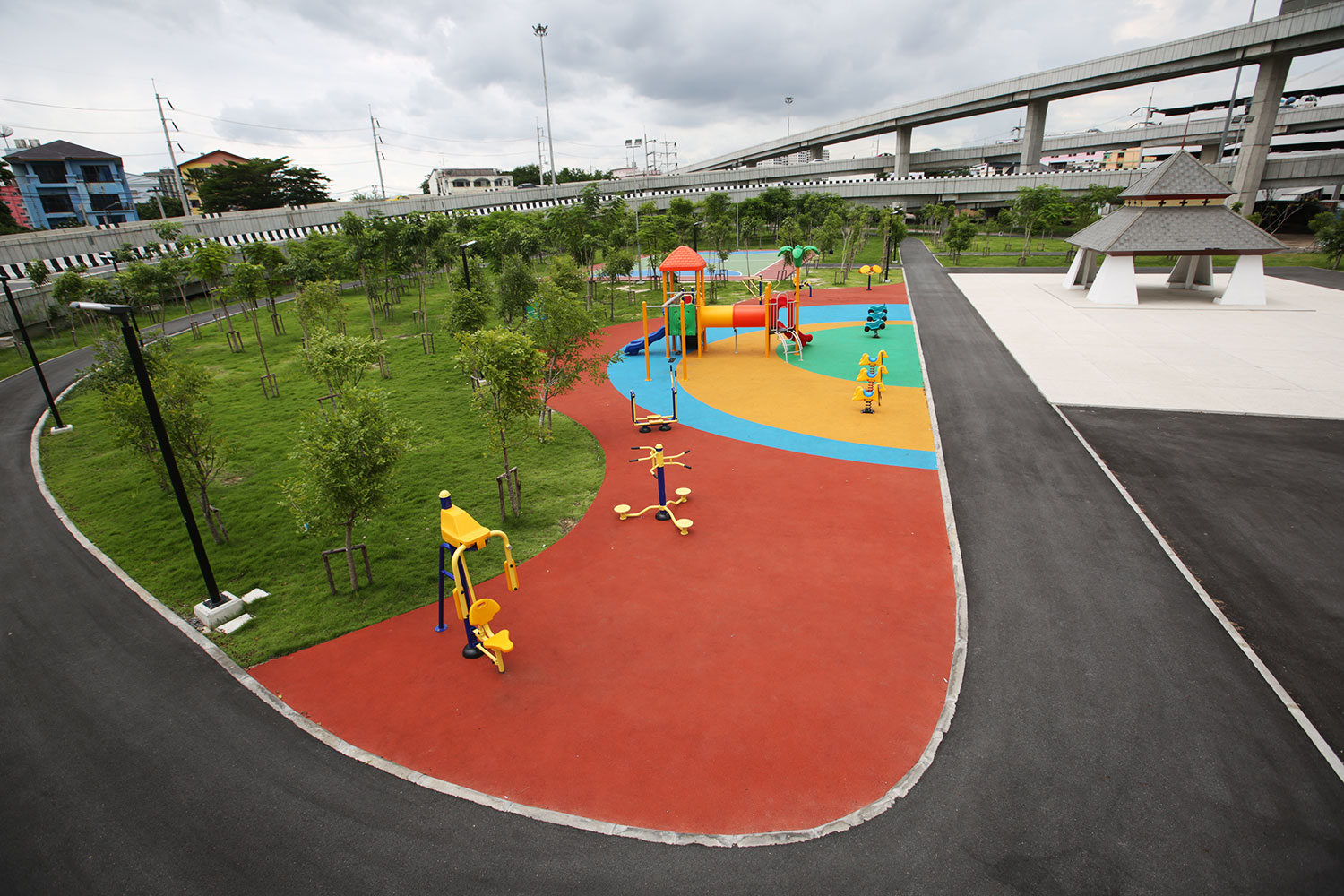 According to the BMA Data Center, BMA Permanent-Secretary Silapasuai Rawisaengsun said that the BMA has set a goal to increase green areas per person to 10m² by 2030. The BMA has already managed to bring the green areas per person up to 7.1m². Once the proposed targets to plant more trees and increase public parks have been reached, Bangkok will have additional green spaces totalling approximately 108 rai.

A collaboration between public and private entities, the Gold Line will consist of four stations stretching 2.8km. The first phase of construction, anticipated to end this year, will result in the opening of three stations, namely Krung Thon Buri, Charoen Nakhon (Iconsiam) and Klong San, which will cover 1.8km of the line. The end of the second phase, in 2023, will see the launch of the last station. It will extend the line along Somdet Chao Phraya Road and connect it to the MRT Purple Line. 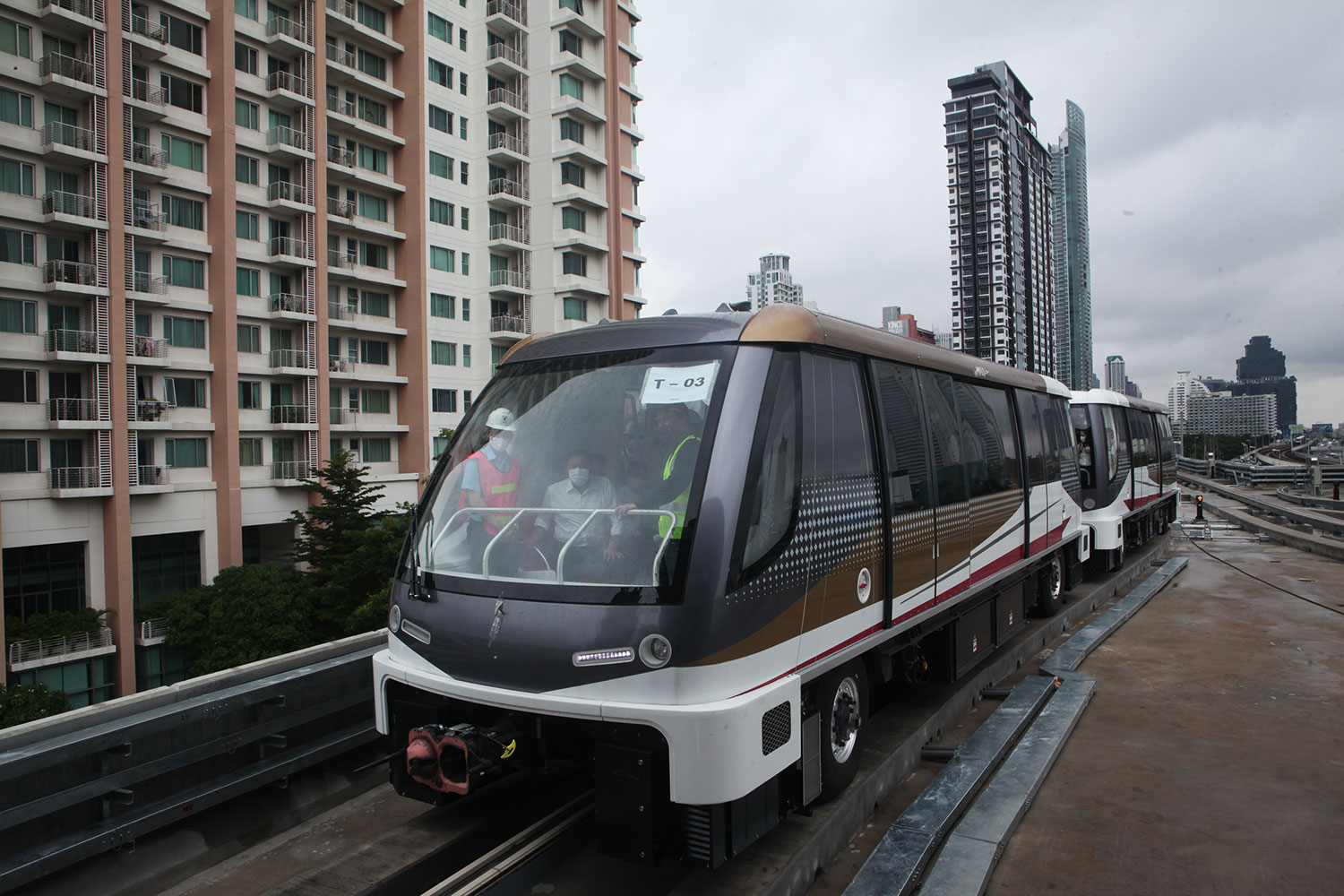 The special characteristic about the Gold Line is that it will feature a rubber-tyred, self-driving electric train system. Bombardier Innovia APM 300 electric trains, with a maximum speed of 80km per hour, will shuttle up to 276 passengers using two passenger carriages. The Bangkok Mass Transit System Pcl has a contract to operate the line for 30 years.

Despite construction delays, the first phase is 95% complete as of September and the public can look forward to a mid-December opening, if the tests go well, according to Aswin's official Facebook page.

An estimated 42,000 passengers are expected to use the Gold Line daily when it opens and they will pay a flat rate of B15 per ride.