Have no fear of missing out on Malevolent
Life
Social & Lifestyle

Have no fear of missing out on Malevolent

With the impact of the coronavirus on the global film industry causing cinemas around the world, including Thailand, to struggle with a lack of big releases, it's understandable that the number of movies showing in theatres nowadays aren't as diverse as usual. And without new blockbuster films to show, we've seen many cinemas rerun old movies in the past few months, whether it's Hong Kong action/drama classic A Moment Of Romance (1990), Christopher Nolan's sci-fi epic Inception (2010), Korean zombie movie Train To Busan (2016), or action hit starring Keanu Reeves John Wick Chapter 3 (2019).

Hitting cinemas this week is another older British mystery/horror film, Malevolent, about a group of charlatan psychics that find themselves on the wrong side of a paranormal investigation. First released in 2018 as a Netflix original and after being delayed multiple times, the film has finally landed in local cinemas.

Directed by Olaf de Fleur Johannesson from a screenplay by Ben Ketai, Malevolent features English actress Florence Pugh earlier in her career before breaking through a year later with films like Midsommar, Fighting With My Family and Little Women. However, fans of Pugh expecting to find something similar or as good as Midsommar might find Malevolent a little disappointing because just like many other Netflix horrors, Malevolent is nothing but standard fare with a forgettable storyline.

Set in 1986, the film follows a group of paranormal investigators in Glasgow, Scotland, that makes a living from exorcisms and psychic occurrences. Brother and sister Jackson (Ben Lloyd-Hughes) and Angela (Pugh), along with cameraman Elliott (Scott Chambers), are persuaded to take a job outside of their comfort zone. Arriving at a country estate where several murders and strange occurrences have taken place, the group soon discovers the location is actually, really, haunted while Angela begins to realise that she actually, really, has psychic abilities.

Despite the interesting concept, there are many flaws with Malevolent. Although it is pretty unpredictable and you can't guess what's coming next in the story, that doesn't necessarily make it a good film. The performances overall are not that great, the make-up effects are pretty sloppy and unrealistic, and the movie feels like somebody's first attempt, almost like a student film project at times. Many shots are just poorly framed, and the visuals, lighting and editing are simply amateur.

Plotwise, the movie really just seems like a mixed bag. It's almost like the filmmakers had so many cool ideas and then decided to throw them all together in one movie. The film starts off like pretty much every other supernatural mystery by giving us the background about the investigation into the history of the house, an attempt to communicate with spirits, ghost sightings, past murder cases that need solving, jump scares etc, but then it abruptly turns into a slasher/torture/shocker in the final act. Sadly, none of it really comes together and what we get is a big mess. 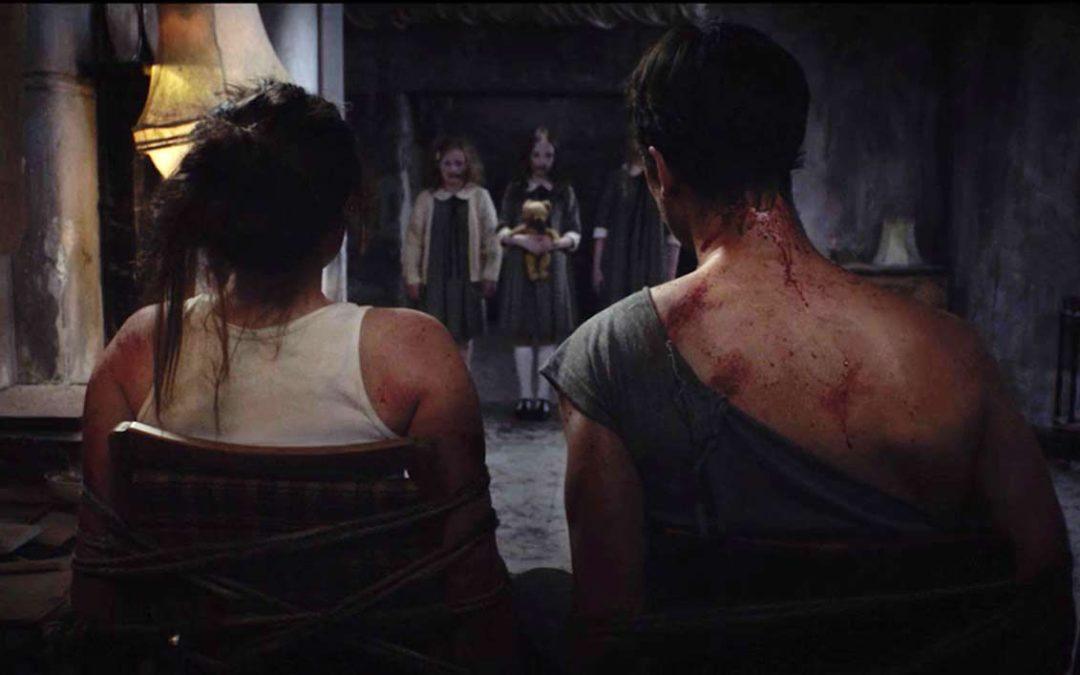 Malevolent takes a very long time to get into the house where all the shenanigans are going to happen. The film also wastes a lot of time on many unnecessary subplots that never resolve in the end. It really tries to do all the character development things early on, like the back stories of Angela's parents who also had supernatural talent or the real conflict between Angela and Jackson. However, the movie gives us all this information just to abandon it and let's not forget the tormented ghosts of children with their lips sewn shut that we get so curious about but, in the end, turn out to play such a little part.

My other big issue with the movie is the clear logical flaws within the entire premise and all the characters. There's a lot of frustrating moments -- like in many other horror movies we have seen in the past -- where the characters act a bit dumb. However, these instances are especially frustrating in this movie like when a character is in deep trouble or when the main character is supposed to be in a hurry to save someone but somehow, they just stop to look at something in the house or get distracted by something less important.

The film is quite short at 88 minutes but it felt much longer. And that isn't a good thing at all, especially if you have to spend extra money on tickets to watch it at a cinema instead of on Netflix at home. My advice is to save your money and wait for something more worthwhile.

Lady Gaga gets stolen dogs back

I choose you! Pokemon turns 25