Hermès has been synonymous with beautiful silk scarves since 1937, a century after Thierry Hermès founded a harness-making workshop in Paris.

Tracing the history of the quintessential luxury brand, its store at 24, Rue du Faubourg Saint-Honoré began selling timepieces bearing the Hermès signature in the late 1920s.

Featuring stirrup-like asymmetrical lugs, the classic round Arceau was designed by Henri d'Origny in 1978 -- the same year that the French company set up La Montre Hermès in Bienne, Switzerland.

The development of its own movements began in 2003 through a partnership with Vaucher Manufacture Fleurier (VMF) in Val-de-Travers in the canton of Neuchatel. To enhance its mechanical prowess, Hermès Horloger later acquired a financial stake in VMF.

The case and dial are made at Les Ateliers d'Hermès Horloger in Le Noirmont. The ateliers combine the expertise of dialmaker Natéber SA, originally based in La Chaux-de-Fonds, and case producer Joseph Erard SA in Le Noirmont, respectively acquired by Hermès in 2012 and 2013.

The limited space of the dial challenged Hermès artisans to create miniature works of art on the Arceau Harnais Français Remix and Arceau Into The Canadian Wild models.

The Arceau Harnais Français Remix features an engraved and hand-painted porcelain dial portraying a pair of splendidly harnessed horses, echoing the central element of a silk scarf designed by Hugo Grygkar, the prolific in-house designer from the 1940s to 1959. 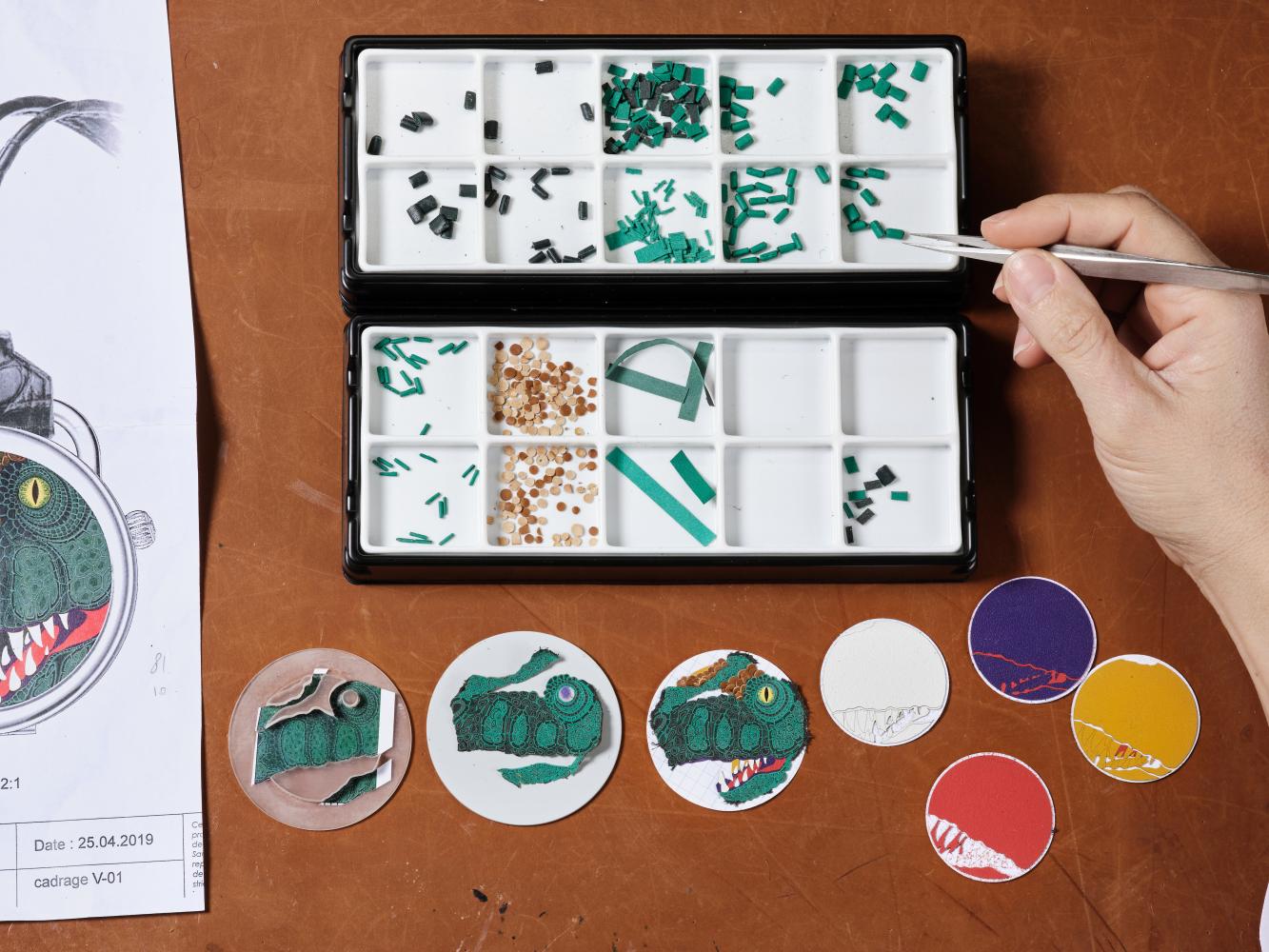 The Arceau Pocket Aaaaargh! features a T-rex made of marquetry and leather mosaic. (Photos © Hermès Horloger)

The profile of the horses is hand-engraved on bisque (unglazed) Limoges porcelain. The matte appearance of the material corresponds to the production stage preceding enamelling, which makes the porcelain both smooth and shiny.

Different colours are applied directly to this raw material and the delicate successive applications of colour are interspersed with successive and precise firings in the kiln in order to fix and enhance the pigments.

Likewise, meticulous craftsmanship is required to work on the aventurine dials of the Arceau Into The Canadian Wild watch which features a snowy owl or polar bears.

Both animals stem from a silk scarf designed by British artist Alice Shirley in 2017 on the occasion of Canada's 150th anniversary.

The original drawing portrays the abundance of flora and fauna and natural treasures of Canada's vast territories bathed in oceans, lakes and rivers. 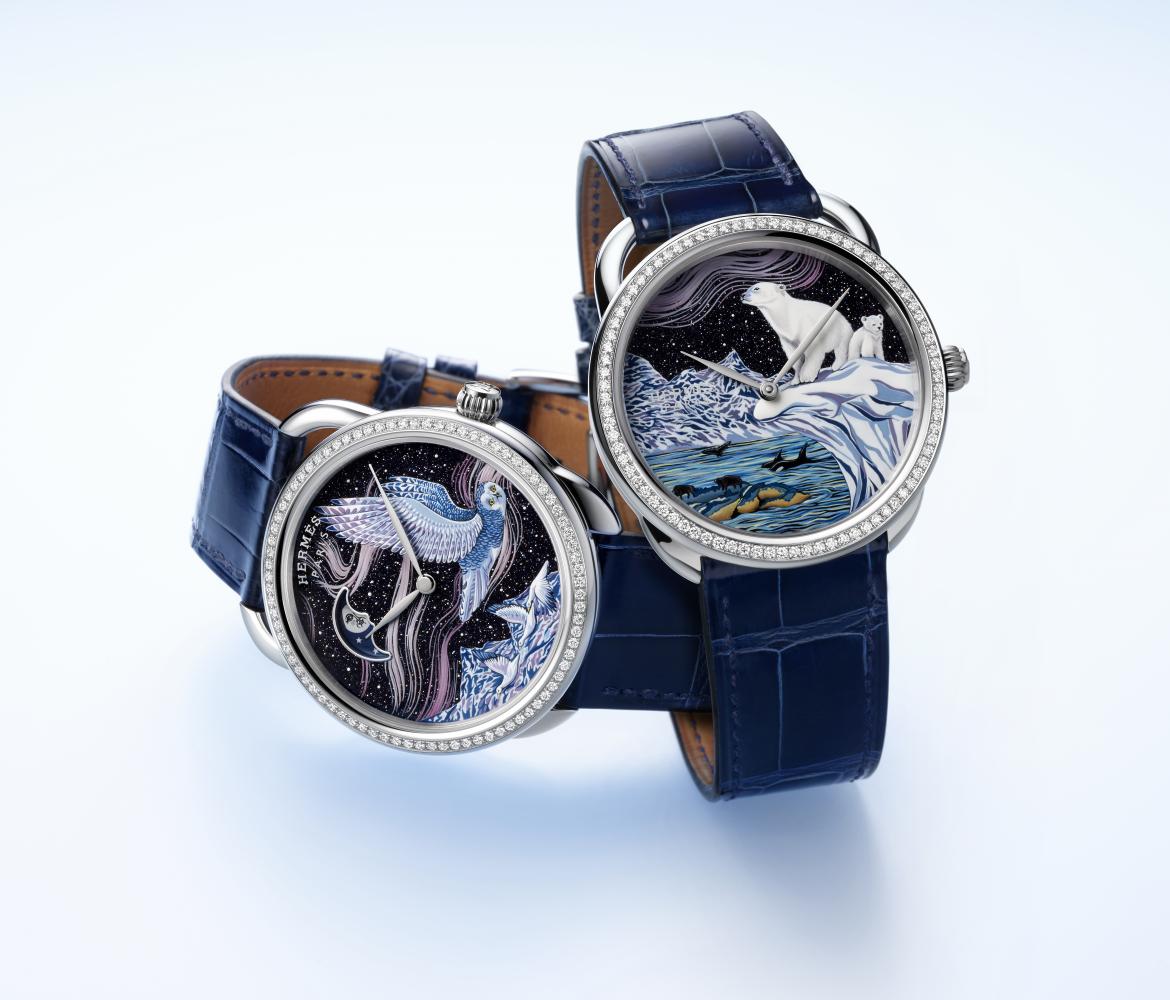 The snowy owl -- emblematic of Quebec -- flying amid the Northern Lights (aurora borealis) graces the first model with a moon phase display; while the other features a polar bear with its cub, standing on top of waves populated by fascinating creatures.

The artisan devotes more than a week per dial to accomplish the miniature painting, first tracing the contours of the motif on the aventurine base and then placing it in the kiln to fire it in place. The different volumes of the landscapes and animals are formed by means of successive layers of paint alternating with successive firings.

Presented in a diamond-set white gold case, the Arceau Harnais Français Remix and Arceau Into The Canadian Wild timepieces are powered by the in-house manufactured H1912 and the moon-phase version by the H1837 movement.

The numerals H1837 refer to the founding year while H1912 recalls a wristwatch worn by Jacqueline Hermès in a photo taken in 1912. It was actually a pocket watch with a strap made by in-house saddle-making and leather craftsmen. 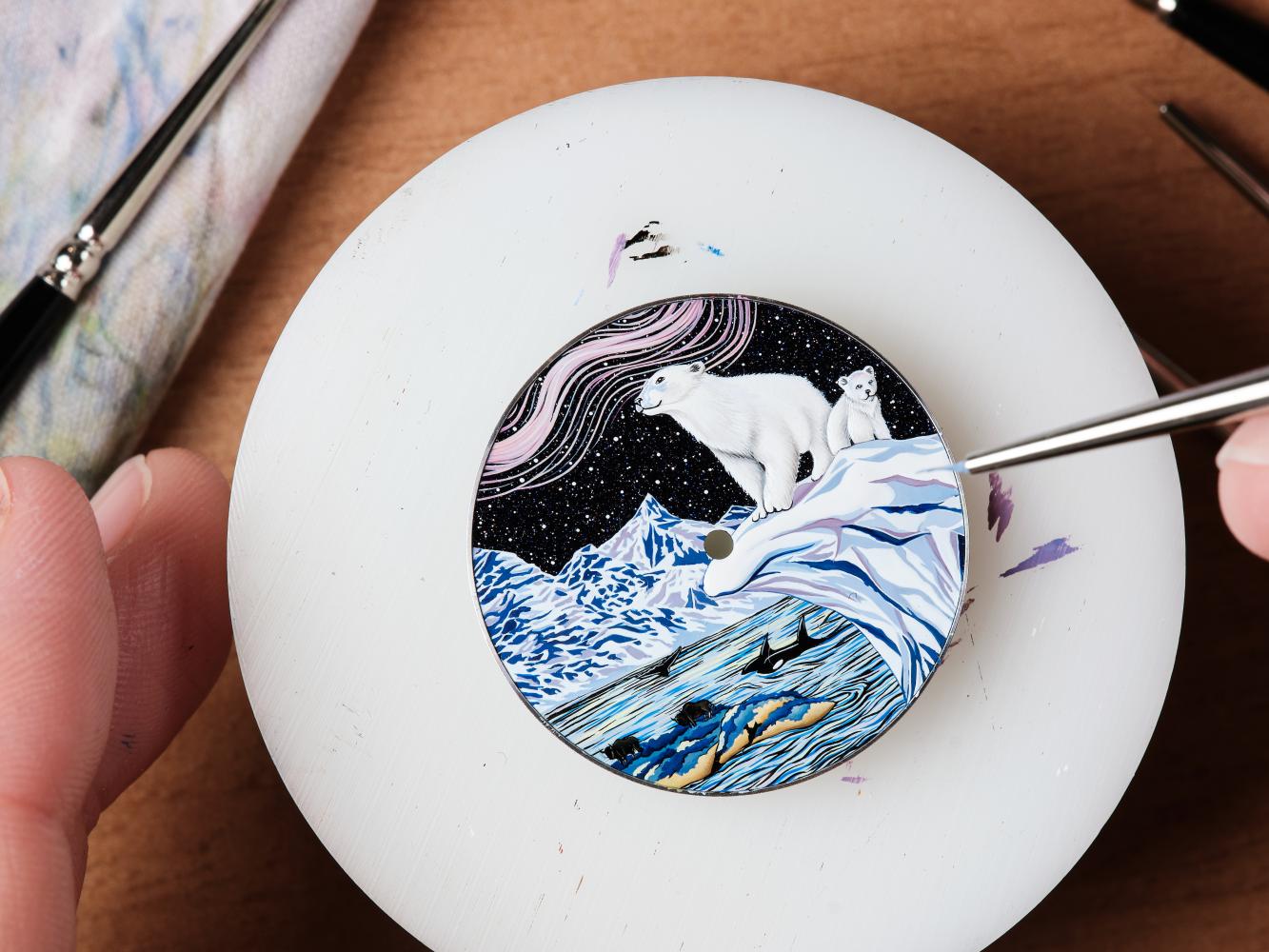 The leather heritage is celebrated in the creation of a one-of-a-kind pocket watch, whose white gold cover whimsically features the T-rex from the Aaaaargh! silk scarf designed by Alice Shirley.

Composed of marquetry and leather mosaic, the Tyrannosaurus with half-open jaws and an attentive eye, which is seemingly peeking through a porthole, comes to life after a month of meticulous work using exclusive techniques developed in Hermès' leather workshops.

The head and scales are a mosaic made of finely hand-cut multicoloured leather fragments, applied one by one to faithfully reproduce the original pattern.

The domed eye of the dinosaur, visible on both sides of the cover, is made of cabochon cut Grand Feu enamel. Finally, the jaw and tongue are crafted in leather marquetry, from fine tesserae cut from various coloured leathers, previously thinned to just 0.5mm, before being juxtaposed on the enamel base.

The unique-piece Arceau Pocket Aaaaargh! with a minute repeater and flying tourbillon beats to the rhythm of the H1924 mechanical self-winding movement, which further shows Hermès Horloger's technical expertise. 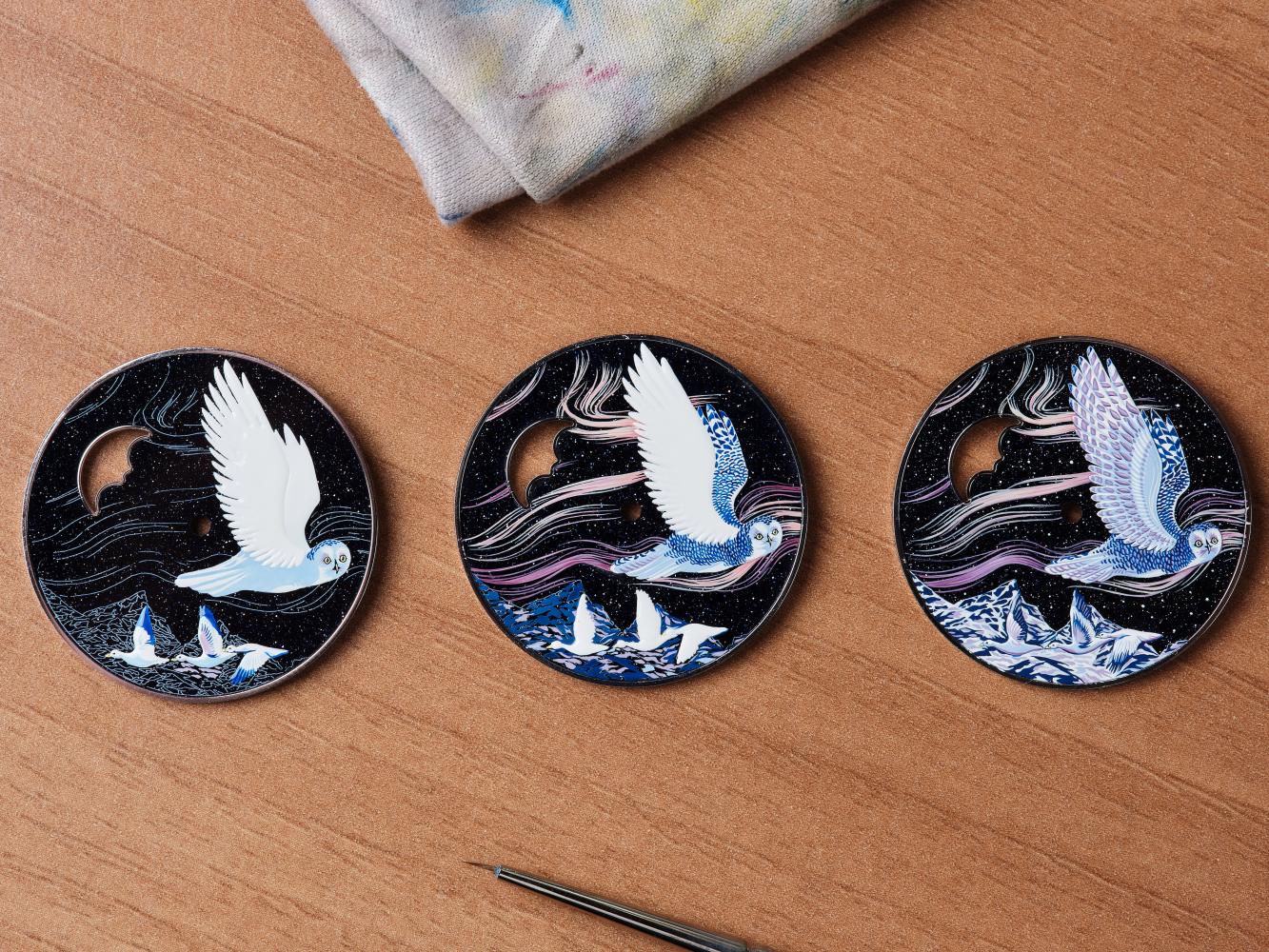 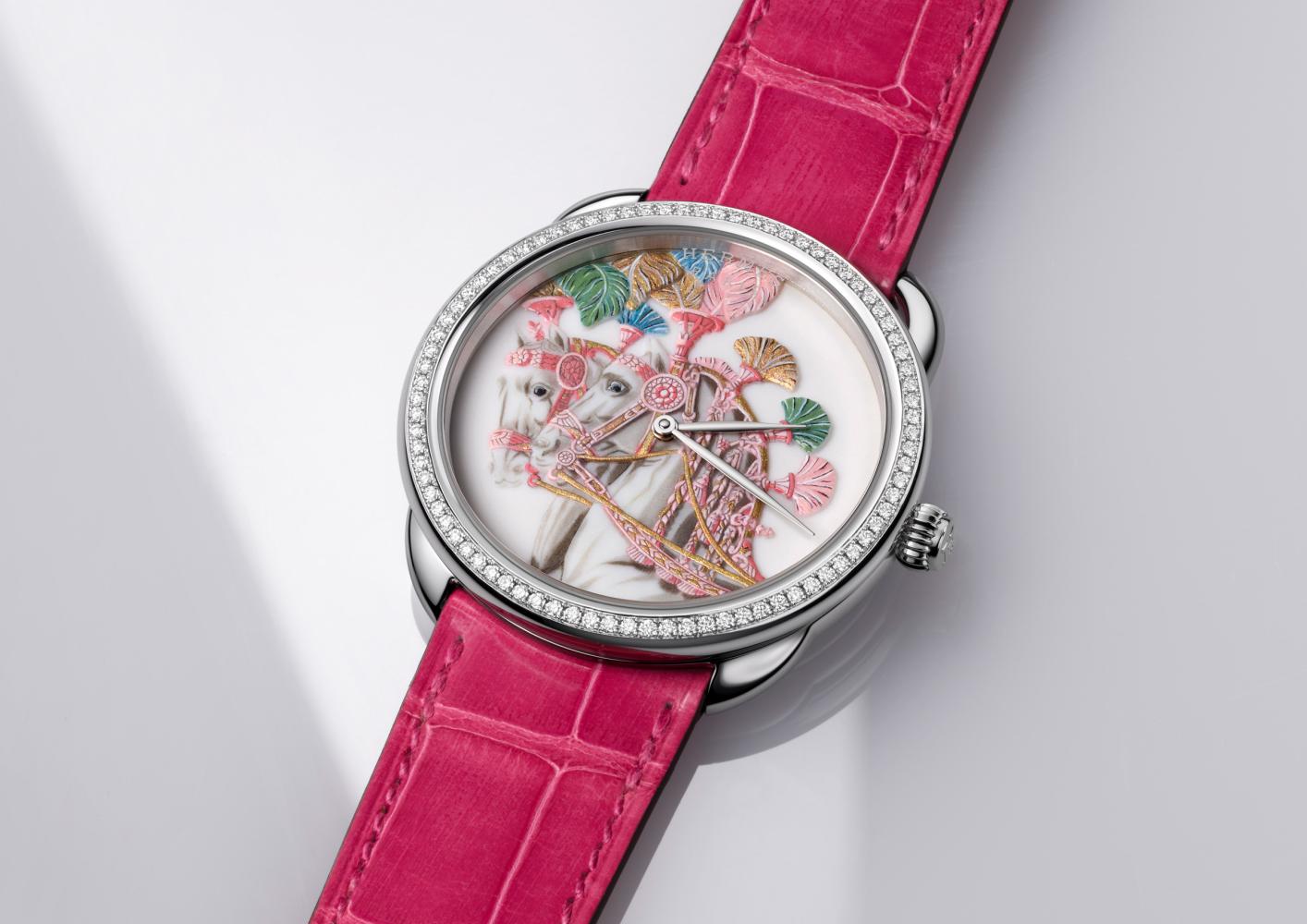 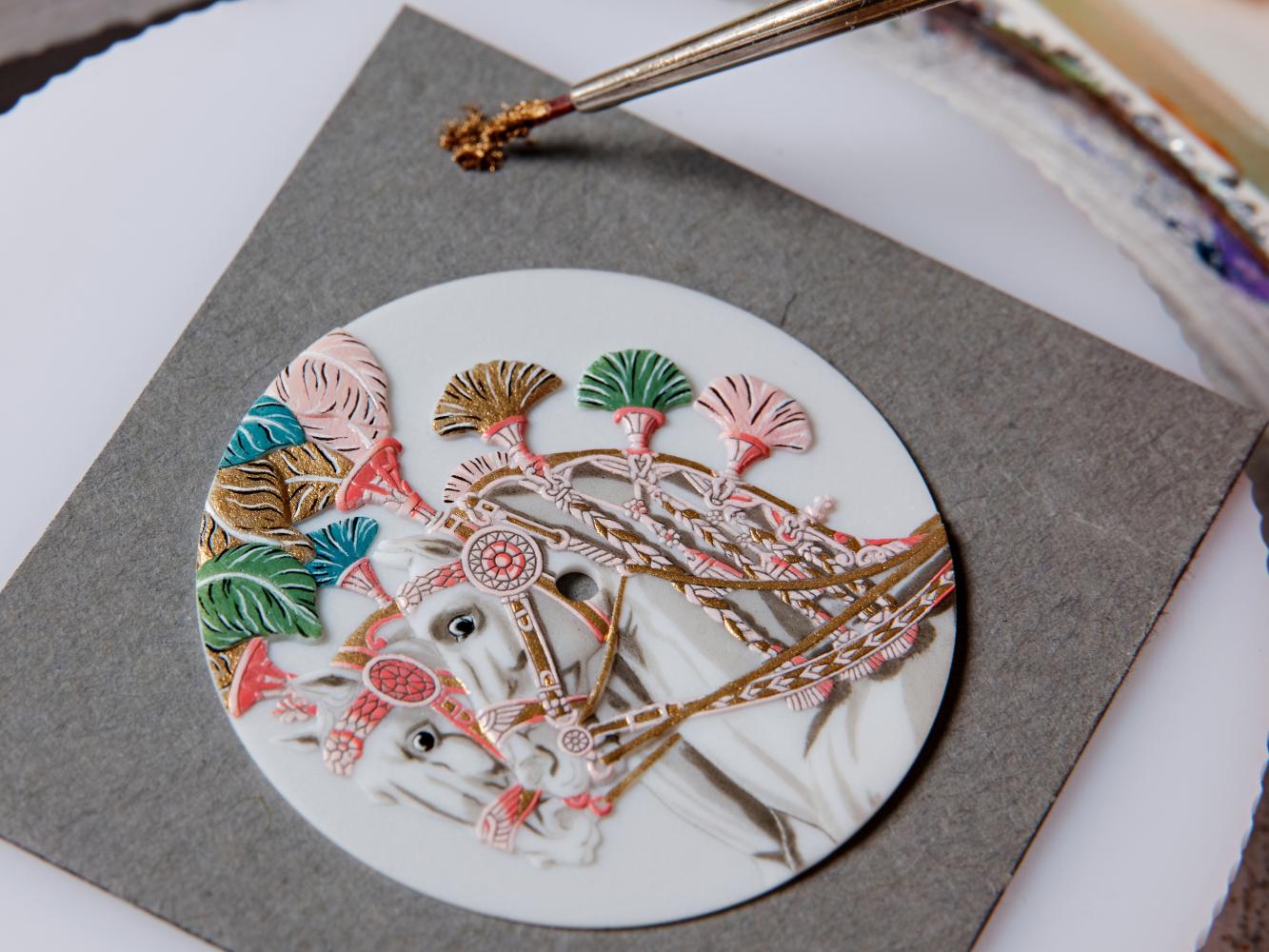