A royalist teen has found himself the centre of unwelcome attention after he let the TV cameras into his slum home, sparking a debate over whether he is an unwitting victim of the social order he champions. 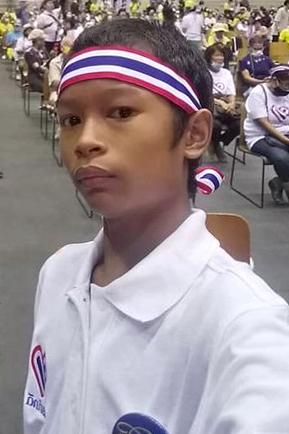 Kodchayotee "Game" Cheaplaem, 15, a founder of the group Teens Helping the Nation Network, and a member of the royalist Thai Pakdee group, is known for his sharp tongue and presence on yellow-shirt rally stages. PPTV interviewed him at his run-down slum home in Bang Kae last week, remarking that while many were familiar with his utterances at pro-monarchy gatherings, few knew much about the lad himself.

Game admits most members of this teen network are in fact adults, as he claims few teens love their country. He was referring to the anti-government youth movement, Free Youth, which is demanding the prime minister resign, reforms to the monarchy, and constitutional change.

Putting the case for the other side, Game's youth network, and the Thai Pakdee (Loyal Thai) group headed by former Democrat MP Warong Dejkitvigrom, one of his heroes, oppose changes to the charter, champion the government's good works and want to protect the monarchy.

Game, however, goes further than that, often personalising his attacks. He says Progressive Movement founders Thanathorn Juangroongruangkit and Piyabutr Saengkanokkul, whom he accuses of being behind the youth-led anti-government movement, should be thrown of the country; the lese majeste law strictly enforced; and students who join the anti-government side penalised with lower marks at school and denied opportunities to work.

His outspoken stance has won him few friends on the other side, with some netizens openly threatening him on his youth network's FB site, Yaowachonchuaychat. Recent posts there include images of the paint and graffiti damage wrought by the protest at the Ratchaprasong intersection on Wednesday night, as well as regular calls on supporters to sing the national anthem, wear their branded T-shirts, and turn out for rallies in which they present their demands.

"May the dictatorship prosper and thrive, and democracy end in ruins," he declares, referring to his advocacy of military-led government. Game says the Prayut Chan-o-cha government, which is directly elected but has its roots in a coup, has modernised the country with new mass transit routes. Whenever Thais try democracy, by contrast, it results in rice scheme corruption, so is not to be trusted.

While the political "narrative" sounds impressive, Game's circumstances are anything but, judging by the PPTV interview. Game lives in a run-down weatherboard home with his paternal grandmother and a one-year-old half-sister.

He finished primary school at Wat Chaichimplee in the Phasi Charoen area and now studies one day a week through the informal education system. By his own admission, he has few friends, no interests, no favourite food or artists, does not enjoy learning, and has no idea of what he wants to do with his life. He spends his days in his room playing on his phone, though has recently been working part-time as a builder's assistant. His parents divorced when Game was nine months old, and he rarely hears from his mother. His grandmother, aged 70, whom he calls Mum, has raised him since he was a baby.

For years his father, 36, who transports plastic in Nakhon Pathom, sent no money home. That changed when he started a new family and asked his mother to take on the extra burden of raising his young daughter. He now sends home money occasionally and visits along with his new wife on weekends.

Game says he started following politics as recently as June or July, when he watched the youth protests on FB live. He didn't agree with the students' demands, but was impressed with Dr Warong, leader of the Thai Pakdee group, whom he contacted on FB. After they started talking, Dr Warong invited him on stage.

Today he also counts among his heroes staunch royalist Dr Rianthong Naenna, the Mongkutwattana Hospital director who had a female doctor sacked recently for failing to show loyalty to the monarchy (she signed a petition asking authorities to refrain from using violence against the protesters), and ex-Grammy singer Haruethai "Ou" Muangboonsri, another outspoken royalist.

Game's PPTV interview has drawn sympathy on the internet, though perhaps not in the way he hoped. Many netizens say they are prepared to put aside their reservations about Game's politics as they can see he is a victim of the system he ironically champions.

While many see him as a "slim" -- an unflattering tag for pro-monarchists, some of them reformed red shirts, who see a role for the military in politics -- they say Game is too young to know much about politics and doesn't seem to realise the system is holding him back.

One netizen, Duang Samorn Buaajib, wrote: "I feel sorry for him. He's prey to a system which creates extreme wealth and hardship and keeps people suppressed...a system which tricks him into thinking his life is a good one, and shouldn't change it.''

Netizens writing in this vein say he is a victim of economic inequalities, a broken family, and a flawed education system.

"His life has almost no contact with the state welfare system; even the skytrain he goes on about, how many times has he been on it?" another asked.

In reply to these critics, Game denies he comes from a poor family, insisting they have moderate means but practise "sustainability".

Unconvinced, netizens say Game is a young man searching for acceptance. "His family have all but rejected him, he has few friends, no work or school...little wonder if he should embrace adults from a cause who take him under their wing and spoon-feed him information."

Netizen Mee Mydear, in a comment "liked" by 2,200 readers, said he felt inspired by Game's story to carry on fighting for the democracy cause which Game himself opposes.

"After seeing his story I am even more determined to fight for change in this country...I want Game to know that this elder will fight for democracy so his life will improve. I promise!"

A day out with the masses

A hi-so businesswoman has come under fire for trivialising the lives of those worse off, after she posed for a fashion shoot as a bus ticket collector. 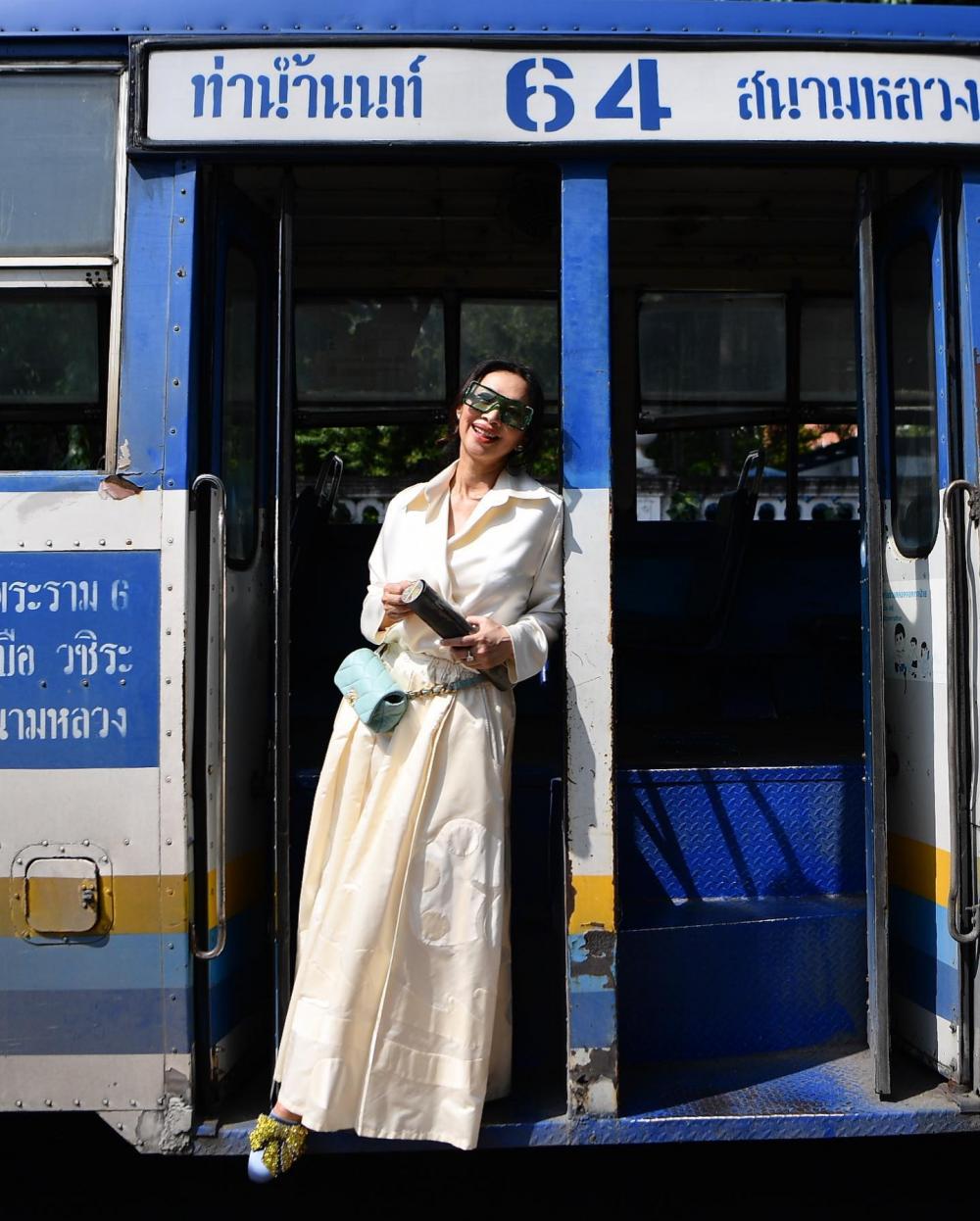 Praew magazine posted the pics of Supornthip "Tippy" Choungrangsee wearing a long fashion dress and fancy shoes, hanging out the door of a so-called hot (non-aircon) bus. A blurb accompanying the shoot claimed her brief flirtation with life as a ticket collector helped make a dream come true.

Tippy, a hi-so with a background in public relations who appears not to have seen the savage reaction coming, is also pictured with a bunch of well-dressed friends inside the vehicle, and holding a ticket dispenser. "You would have to say she is the prettiest ticket collector in the world," the story gushed.

The images are also posted at Tippy's FB site, though Praew itself has since taken them down. Most media outlets which ran the images blurred her face to conceal her identity; some also withheld her name and that of the magazine.

In these fractious times, netizens were quick to pour scorn on the images, saying Tippy was making light of the everyday suffering which ticket collectors must endure as part of their job.

"This is a case of the elite looking at economic disparities as a fun thing...and romanticising a life of toil which she would never opt for if she had to do it for real," they said.

They also say that if Thailand was a "decent" place it wouldn't have to rely on such aged, decrepit vehicles. "It should have a modern mass transit system available to all," one wrote.

Others stood up for bus collectors, saying they had chosen a noble profession despite the hardship.

"They memorise places and customers well, dispense with tickets quickly, and know how to keep their balance in a moving bus," one wrote.

Another, Tazbeatrix Sky, said some netizens were patronising, despite wanting to stick up for the poor.

"Why do you assume this career has to be one for the grassroots? That it is a job of hardship, struggle, living hand to mouth, and which no one would choose to do? I know many people who have chosen this career path, and the wages are no minor thing...so, who is looking down on whom for sure?" she wrote.

Tippy, whom one online biography lists as CEO of Branded The Agency, owner and director of 124 Communications Co, and director of Leicester City football club, has yet to comment.

An actress and her singer husband have won praise for helping out an old rubbish collector who had stopped for a rest by the side of the road. 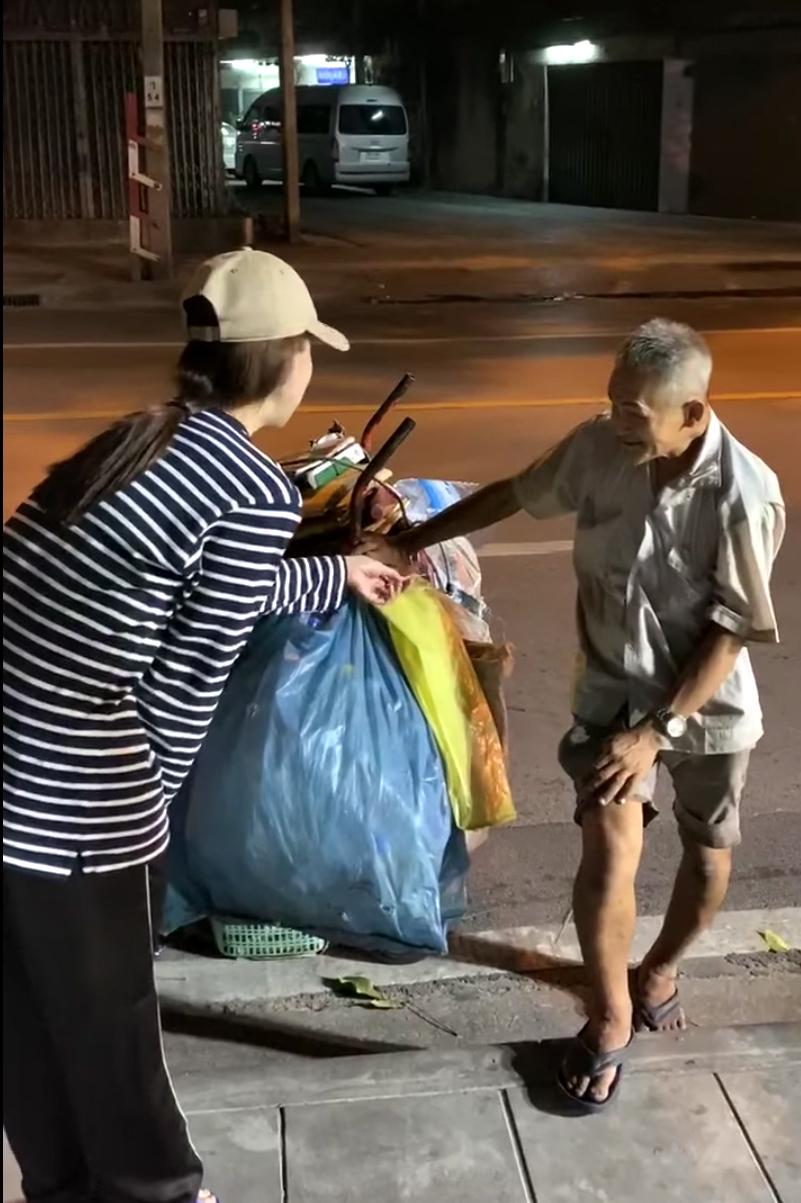 Actress Pijittra "Jeab" Siriwetchapan offered the elderly junk collector 500 baht so he could go home and get some rest, after she and her singer husband Anuwat "Boy" Sanguansakpakdee found the man slumped over his cart outside a petrol station at 2am. The couple had gone to fill up their tank before bed to avoid the next day's traffic.

When they saw the old man they doubled back, parked and approached him. As Jeab greeted the old man and started to talk, Boy filmed the scene.

The old man told her he collects old items for resale and had been working since early that afternoon.

Later that morning he would have to go to the market to sell the goods. He was taking a quick rest by the side of the road to recover his energy. 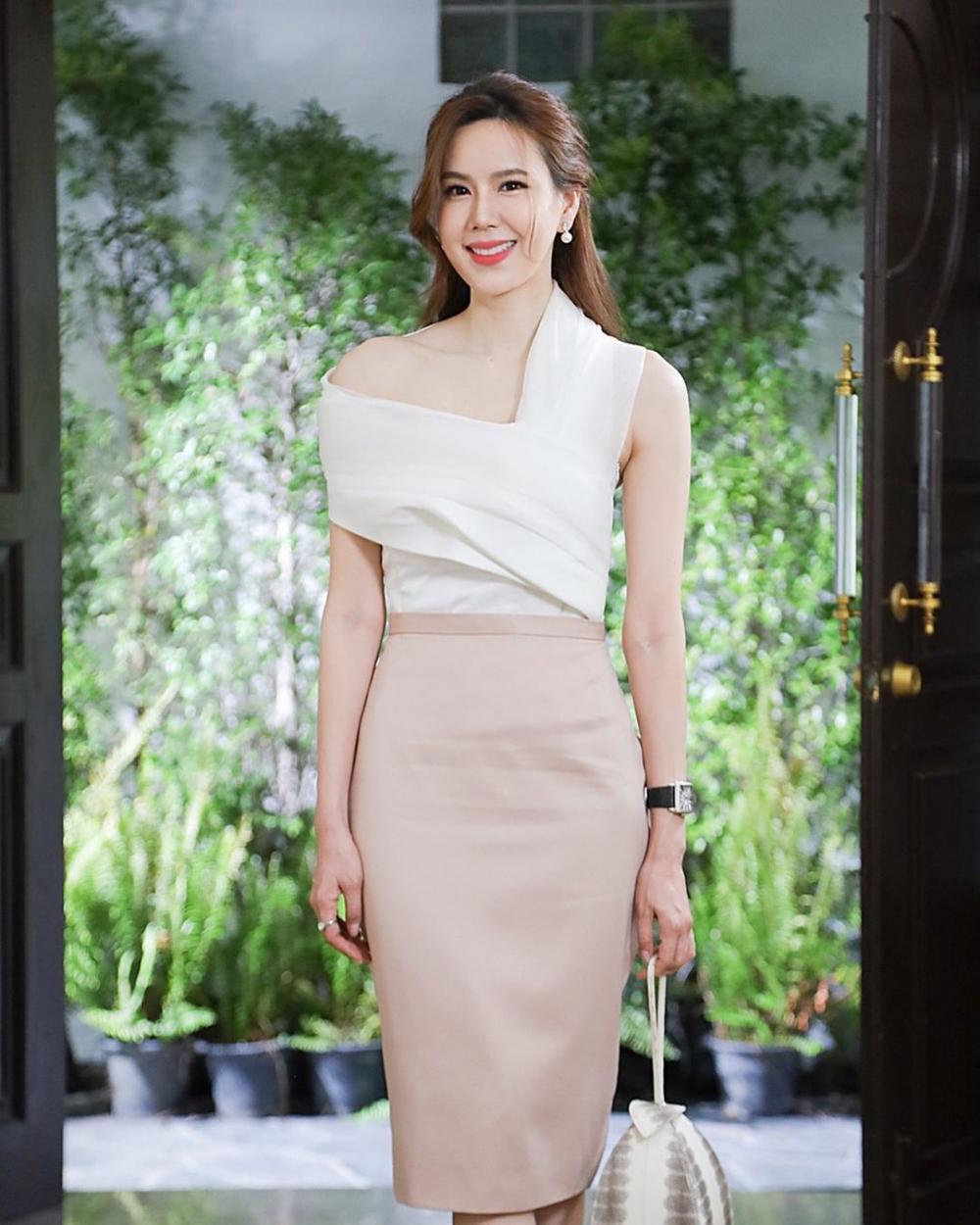 Jeab offered him 500 baht but he initially declined to take it, saying everyone was struggling to make ends meet and she may be left short.

However, Boy, who joined the conversation later, insisted he take the money. He and Jeab feared for his safety if he stayed by the side of the busy road, he said.

In a message accompanying their FB post, Boy urged his fans to look after their elderly folk before they run out of time to do so. Netizens praised the couple for showing kindness to the old man.