Turning to tech for help

Married to an abusive man, Nang* experienced physical abuse by her husband on several occasions. In fact, the physical violence affected her brain and movement to the point where she cannot turn her head normally and suffers from head tremors from time to time. To prevent her children from becoming victims of domestic violence, she urged them to move out but decided to stay with her husband because she claimed that if she left him, nobody would take care of him as everyone in his family had already abandoned him.

Nang is one of many victims who was interviewed by researchers as part of a 2016 study — conducted by Montakarn Chuemchit, assistant dean at the College of Public Health Sciences (CPHS), Chulalongkorn University — looking into domestic violence. The study was conducted across four regions of Thailand and the results showed that one in six, or around 16%, of people (mostly women) in intimate relationships experienced violence from their partners — either physical, mental or sexual.

“At least 78% of all domestic violence victims don’t know how or where to ask for assistance and feel embarrassed to speak out. At the CPHS, we believe there should be a tool that assists victims to find information about support centres and help them reach out to them. As a result, we created a mobile application called I Can Plan,” Montakarn explained.

“We decided to create a mobile app instead of a website because people think domestic violence is something personal. Most users will feel that taking a test on their mobile phone is more private than on a website. Also, more people have access to smartphones than computers,” she added. 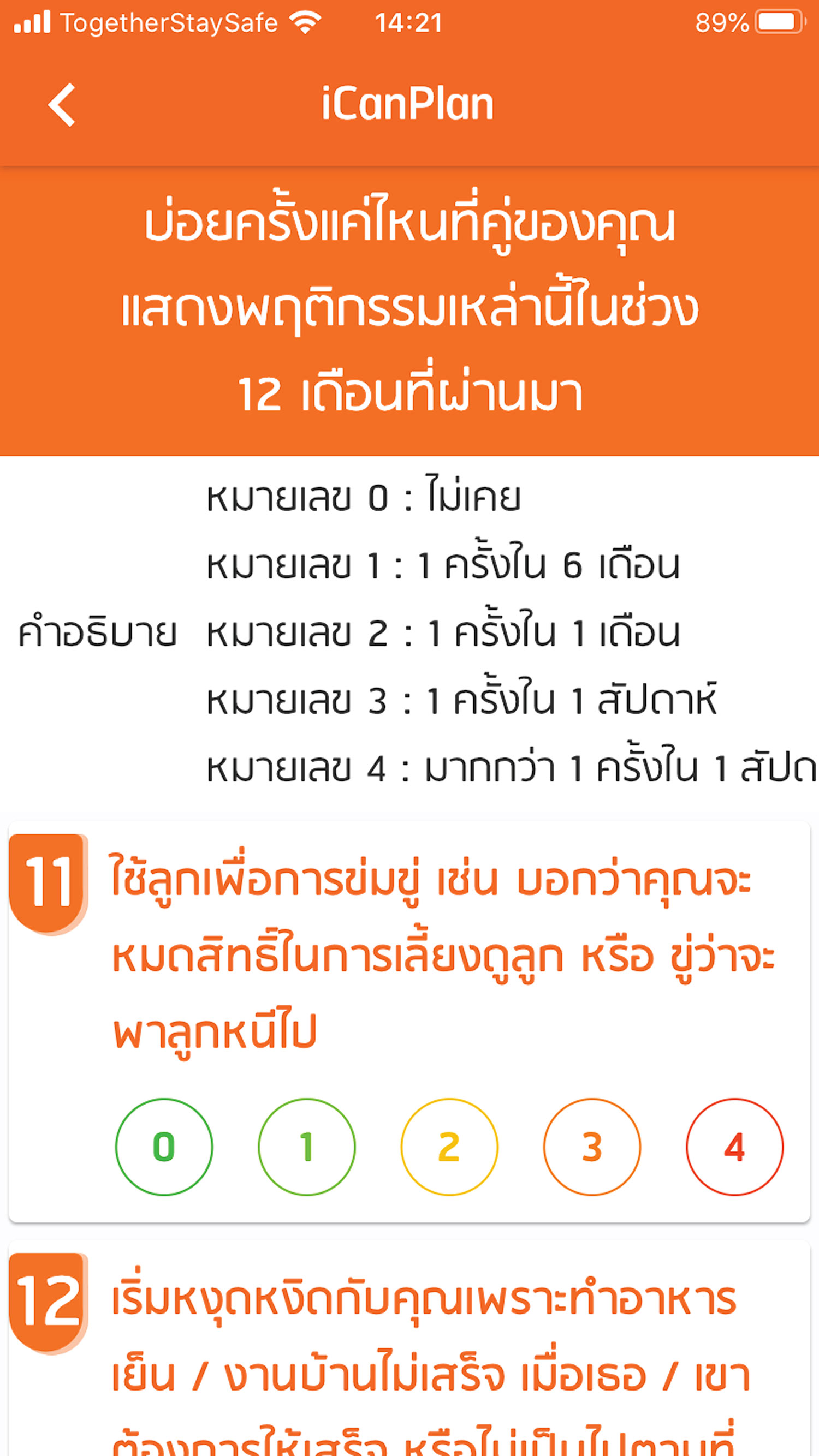 The survey questionnaire is the main feature of the I Can Plan application.

The app has been available both for iOS and Android users since October of last year, however, it only received widespread recognition this year after a collaboration with the Thai Health Promotion Foundation. The main feature of I Can Plan is a 30-question survey to evaluate relationships and determine whether domestic violence is taking place. The results of the survey are divided into three segments — no-violence, low-levels of violence and a high-level of violence. Besides the survey, there are three other important section as well — information and contact details of shelters and service centres for victim support, information about domestic violence and related laws, and advice on how to deal with violence at different levels.

“The app’s 30-question survey evaluates exposure to violence based on three factors — physical abuse, mental abuse and sexual abuse. We first used the test in 2016 as part of our research about domestic violence. Before creating this test, we reviewed several other similar tests around the world until eventually choosing a standardised test from the US known as “The Abusive Behavior Inventory”, which has been used in many other countries as well. The questions cover a wide range of topics including mental abuse issues since it is the type of violence that happens most frequently,” said Montakarn.

The study by CHPS in 2016 about domestic violence collected data from 2,400 people. At that time, most of the samples collected were of people belonging to the lower and middle class. However, I Can Plan is meant to help people regardless of their class status.

“In 2016, we surveyed people directly in their homes, however, we could not talk to office workers because they were not home when we visited. Most people who responded to that paper-based survey belonged to the lower and middle classes and of that group, 15.9% were found to be victims of violence. However, 80% of users who answered the survey on the mobile app have at least an undergraduate degree or higher and another 80% of the users said they had experienced violence. Domestic violence can happen to anyone regardless of their social status or education,” Montakarn said. 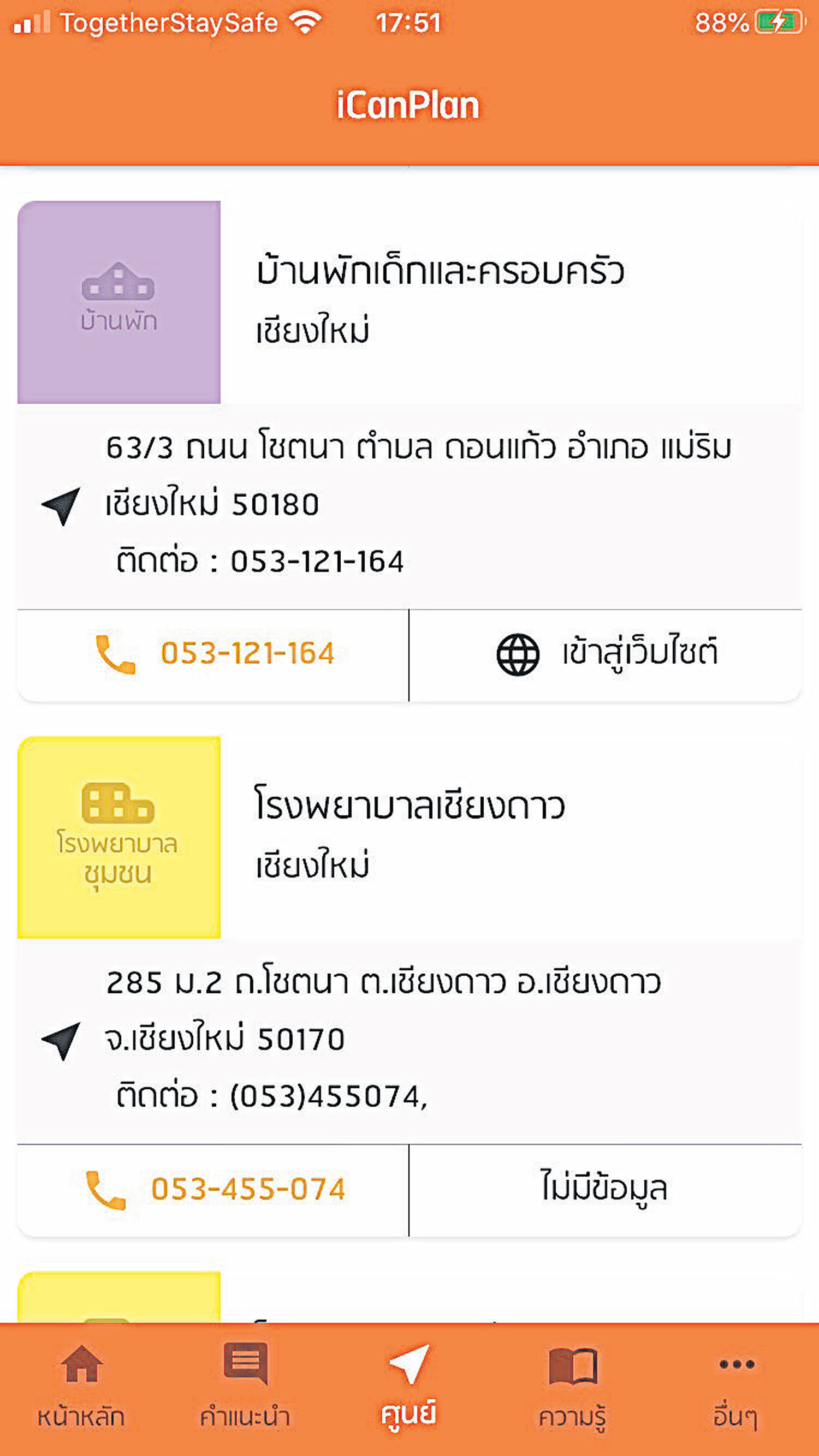 A list of contacts of shelters and service centres that support victims of abuse is available on the app.

However, users of the I Can Plan app have different opinions about the app. A 50-year-old researcher, Ae*, who has been married for more than a decade said she is satisfied with the application after she tried it out to evaluate her relationship situation.

“It is convenient to download and I can delete it easily after I finish the test. Moreover, the questions aren’t difficult to understand. I also recommend other couples to try the app. If anyone experiences violence and needs assistance, she/he doesn’t have to take the test. Instead, they can look at the Social Assistance Centre category and contact the centre immediately,” Ae said.

Unlike Ae, Karn*, a 38-year-old former magazine subeditor who had been married for 14 years felt that the test is difficult to understand.

“The language used is so academic. In the first section, I felt like I was reading research, however, things did improve after that. I was surprised to see that my result indicated a high-level of violence but I didn’t really enjoy reading the “advice” section because it was long and dull. Despite that, I still think the contact information for assistance centres is helpful,” Karn commented.

In another section of the test, the question: “How often has your partner displayed the following behaviours in the past 12 months?”, users  rate their partner’s behaviour on a scale  from zero to four. The behaviours in question include being forced to have sex, being kicked or thrown around, and having your neck squeezed.

An employee in a private company, Chompoo*, who has lived with her boyfriend for one year, commented that if her partner misbehaved with as described in this section, she wouldn’t waste her time in taking the test.

“If someone experiences this kind of behaviour, she/he must already realise that she/he is a victim of abuse without the need of any test. If my boyfriend hurts me like this, I will go to the police,” Chompoo said. 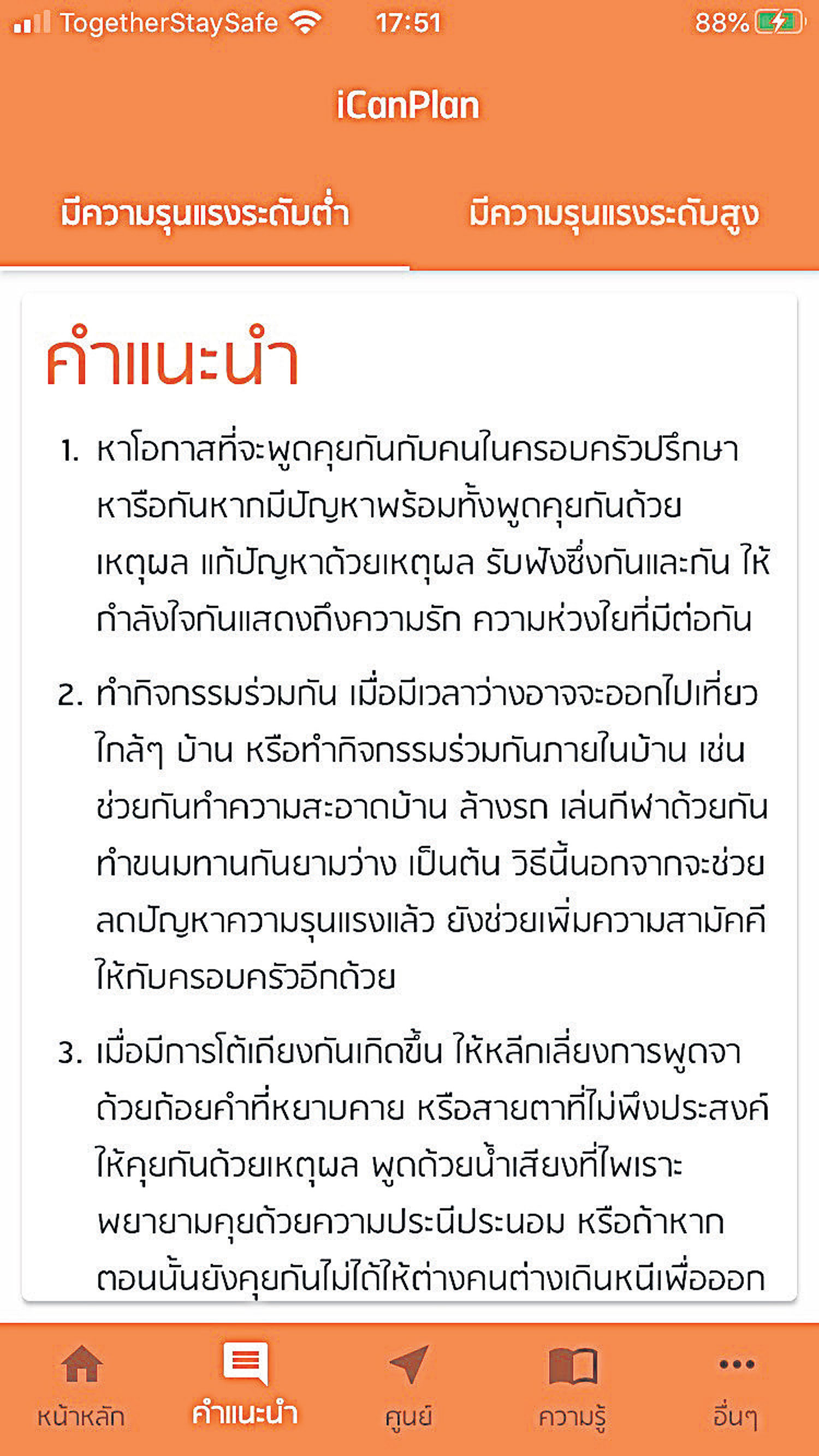 Advice provided for people experiencing a low incidence of violence.

As outsiders, it is difficult to understand victims who don’t try to leave their abusers. Take a look at the case of Nang in the introduction. She was abused severely to the point of becoming physically impaired but she still lives in fear and has panic attacks every time she hears some noise and thinks her husband may be approaching. Yet despite this, she chooses to stay with him.

“We aren’t in the victims’ shoes. We may question why they don’t do this or do that but even many women who are educated and can support themselves don’t walk away from an abusive relationship. In fact, researchers have found that women who are victims of abuse suffer from a decreased awareness of self-worth, self-confidence, and decision-making skills that makes it difficult for them to take action. In the app, we give advice to everyone who wants assistance from the centres. For victims who are financially dependent on their partners, the Ministry of Social Development and Human Security can also provide assistance so victims can financially support themselves and leave the abusive relationship,” said Montakarn.

Although 80% of I Can Plan app users experience abusive relationships, Montakarn is worried that many victims will not go to assistance centres and seek help. Therefore, she wants to develop and make the app better so victims can see the benefits and dangers of their decisions.

“Victims tend to be afraid to ask for help because they don’t know how to talk about this topic. Victims who go to One Stop Crisis Center (OSCC) in hospitals with injuries rarely admit domestic violence as the cause. Instead, they mostly claim to have fallen down the stairs or having met with some other accident. From an early age, women are taught that family relationships shouldn’t be discussed outside the family circle, so it is difficult to open up about domestic abuse which is why I think I should develop an app that helps victims foresee possibilities or scenarios and help prepare them for the courses of actions they can take. In the US, Canada and Australia, this type of app is still under development and it has been claimed that it will present several scenarios and outcomes so users can see outcomes of decisions they make. It will serve as the inspiration for the next stage of the I Can Plan app so that users will find it even more helpful,” Montakarn concluded.