Should sex work be considered a crime? Thais have debated this for several decades. Prostitution was legal until the Prevention and Suppression of Prostitution Act was launched in 1960 and later replaced with the current law. Even though 1996 law claimed to protect prostitutes and prevent human trafficking, it had the opposite effect because it still makes sex work illegal.

In an attempt to call for the decriminalisation of prostitution, the Empower Foundation -- under the slogan "sex work isn't a crime" -- is launching a petition that aims to collect 10,000 signatures through its website to present to parliament in order to repeal the 1996 Prevention and Suppression of Prostitution Act. So far, over 5,000 signatures have been obtained.

Mai Janta of Empower Foundation and Surang Janyam, director of Service Workers in Group Foundation (Swing), explained that sex workers are often arrested due to section 6 and section 7 of the 1996 law.

"Many sex workers are arrested because they are in their workplace even though they are not engaged in any sexual activity. Authorities use loopholes to make sex workers' lives more difficult, forcing them to remain in the prostitution business longer because of the money they lose paying fines instead of providing for themselves and their families," said Surang.

"When sex workers are accused of unlawfully assembling in an entertainment establishment, the Thai sex workers are fined and released, but sex workers from other countries such as Cambodia and Myanmar are detained as witnesses for a long time. During this period, they can't earn any income and some become unemployed in the process. The law doesn't improve the sex workers' quality of life, but instead makes them have criminal records. When they quit this job, they will still have this blemish on their record and this might make it harder for them to find work," Mai added.

Since prostitution is currently illegal, sex workers are treated unfairly by authorities and others.

"When sex workers experience violence from clients, they can't report the abuse to police officers because they will be arrested and often receive negative comments from the authorities who say they deserve it. They don't want this kind of mistreatment. They want to be protected. If the current law is repealed, sex workers can file complaints against employers who take advantage of them and they can receive some compensation. Currently, sex workers can do nothing when an employer mistreats them. If sex workers complain, they will lose their jobs," explained Mai. 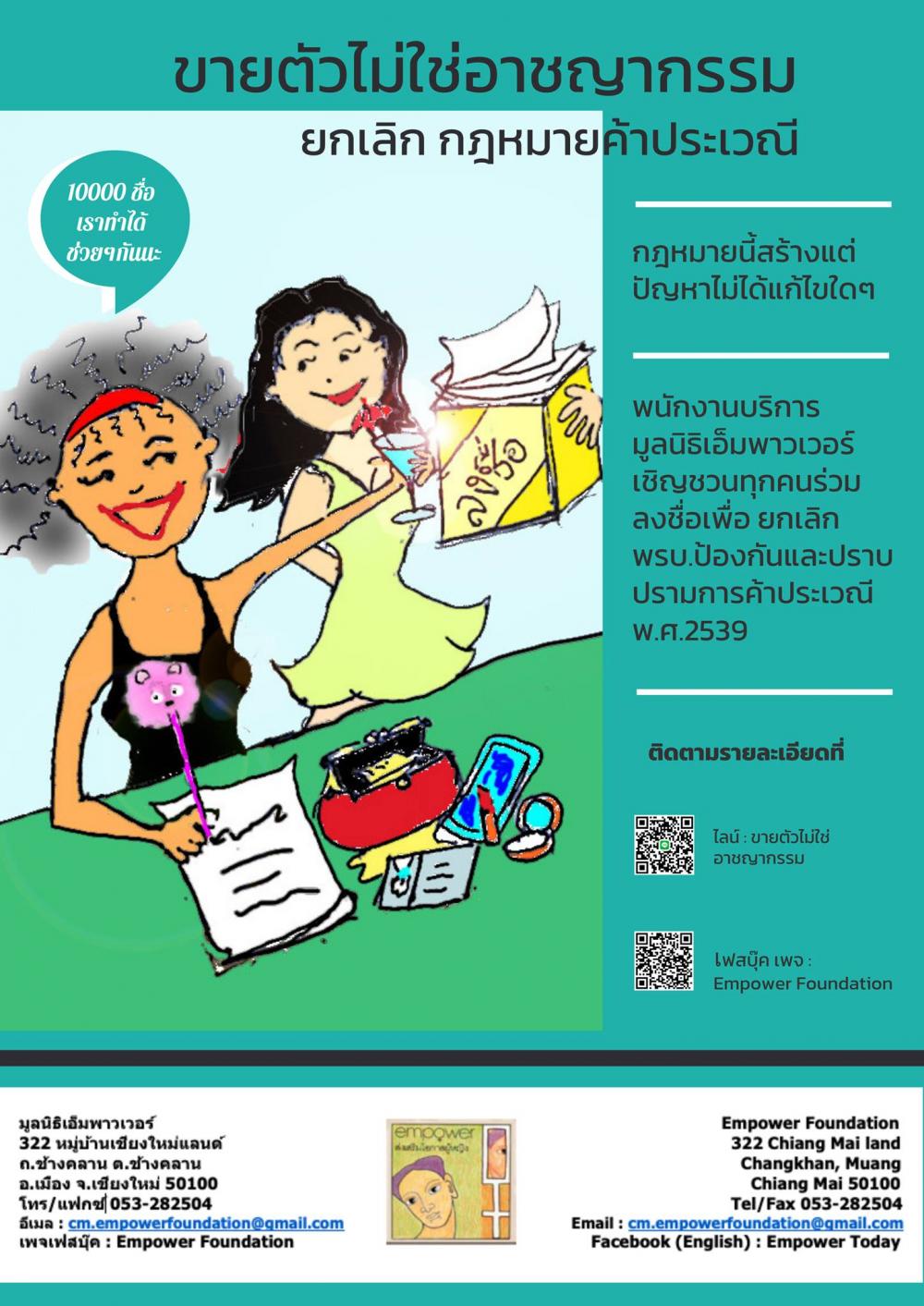 "Sex workers want to be protected like other humans. They want to access to state welfare, medical treatment and education the same as everyone else. They also want to be protected when they experience violence or abuse. They don't want anything above others. They just want to be equal," said Surang.

From a humane aspect, sex workers deserve the right to be treated better. However, in a conservative society like Thailand, some people still have negative attitudes about sex work and want to ban this way of making a living. When the Empower Foundation started to ask people to sign the petition, some people worried that if prostitution is made legal, it will attract lots of people; especially, young ones to the prostitution business.

"We should provide information to youngsters about what kinds of jobs they can do, as well as inform them that if they work in the prostitution business, they will risk contracting sexually transmitted diseases, be arrested and have a criminal record. We should provide them all aspects of information, so they can make their own choices. However, sex work isn't a job that everyone wants to do. It is a job where a worker has to go with a complete stranger. Not everyone is ready to do that," said Surang.

"We don't support child prostitution and there is a child protection law which protects minors from prostitution. Adults have the right to decide to do sex work if they want to, because they may need a job to support themselves and their families. I don't think making prostitution lawful will attract more people to become sex workers," said Mai.

Some married women expressed their concern about the petition. They commented on social media that if prostitution is made legal, their husbands may go to sex workers more often.

"People have many negative ideas about sex workers. Sex workers don't force men to cheat on their wives or to buy our services. It is a husband's responsibility to his family. Many sex workers talk to clients who have problems with their partners until they feel better and go home. They don't intend to make clients break up with their wives," said Surang.

Prostitution is legalised in some countries such as New Zealand, Sweden and Germany. After doing research about prostitution in many countries, a representative of Empower Foundation thinks New Zealand, which was the first country to decriminalise sex work in 2003, has the best system for sex workers.

"Sex workers in New Zealand are legal. They pay personal income tax and can report to police officers when they are mistreated. In Sweden, selling sex is legal, but buying is illegal. Because of this law, sex workers in Sweden experience more violence and death because clients are people who aren't afraid of the law. This is dangerous. We prefer the system of New Zealand regarding their sex workers," said Mai.

The Empower Foundation still needs about 5,000 more signatures to reach their goal. An attempt to decriminalise prostitution isn't something new, with discussion ongoing for several decades. However, not many people support this idea. But Surang says younger people may have more empathy for sex workers.

"The new generation understands that sex work is work and everyone has the right to have a job. The young generation has empathy and think sex workers are humans like others. We experienced this kind of attitude during the Covid-19 pandemic lockdown. A lot of people donated money and things to help sex workers who didn't receive any assistance from the government. Donors told us they want to help sex workers because sex workers are also people who are in trouble from the pandemic. It doesn't matter what kind of job they do. We believe that people have become less judgemental and biased toward sex workers. In the future, we hope we can move forward and sex workers can work under the labour law," Surang said.