Weaving the way to a better future
Life
Social & Lifestyle

Weaving the way to a better future

To continue our female leadership series, Life meets with the woman who helped revive the textile traditions of an Isan village

She always wears her hair in a bun. A measuring tape drapes her neck when she leaves her desk to greet visitors at her home in Ban Sa-ngo in Muang District of Bueng Kan province in the Northeast.

With decades of experience in making clothes, Somporn Saengkongmee, 62, has used her expertise to revive the dying weaving tradition of her community. In the process, she founded the Dara Nakhee Weaving Group in 2016 where she is still president.

"When I took responsibility to lead the group, I put my utmost effort to make it successful. Thanks to my family, they wholeheartedly support me," said Somporn.

Ban Sa-ngo is located on the banks of the Mekong River in tambon Ho Kham, about a 30-minute drive from the city and about 10 hours drive from Bangkok. Surrounded by rice fields, the community is home to farmers who grow rice once a year. In the past, women wove cloths during their free time for family members to generate extra income.

In 1991, Somporn set up a group called "Sao I-san Khuen Thin", meaning the Northeastern (Isan) women returning home. The group produced clothes for a garment factory in Bangkok, however, the 1997 economic crisis forced the factory to close leading Somporn to close the group. Afterwards, the Saengkongmee family decided to move to Bangkok.

"We left our hometown and our rice fields to find jobs. We had made a promise to ourselves that we would return home after our two children completed their university degrees," she said.

At that time, her neighbours Lai and Wan Kamphuttha also founded the Pha Khao Ma Weaving Group following the advice of the Department of Community Development (DCD). The Kamphuttha family helped the community sell pha khao ma or a traditional chequered cloth. Initially, the business did not take off. Ta Lai or grandpa Lai, as he was known, wanted to make clothes for sale by using local pha khao ma as materials, however, no one could help him fulfil his dream, so he asked Somporn for help. When she returned home, Ta Lai wanted her to be his successor because she had more knowledge than others when it came to making clothes and running a business.

"I asked my family for their opinion. They were concerned but supported my decision. Moreover, I did not want to turn down elderly people's request." 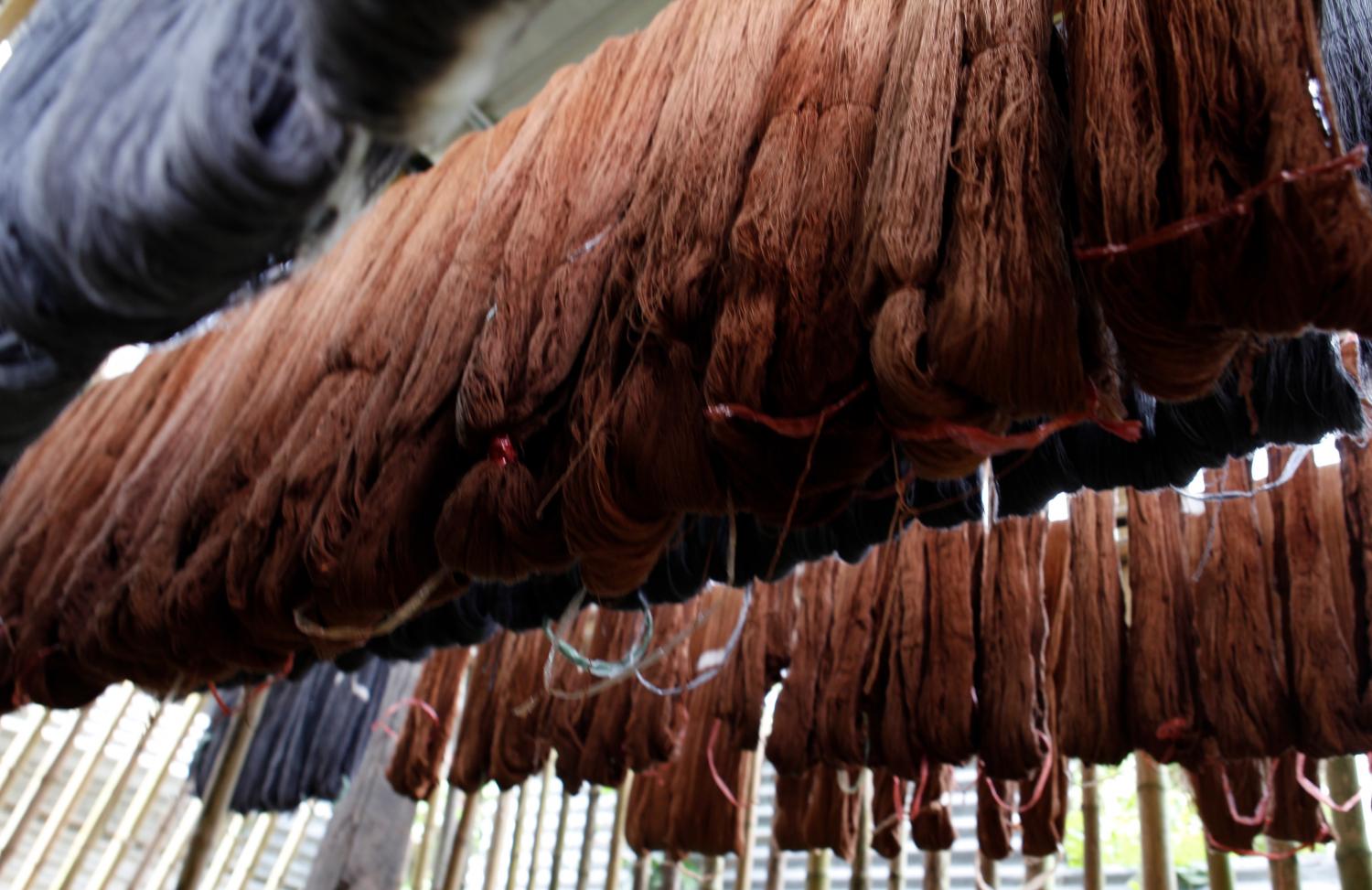 Ready to engage, she loaded stacks of pha khao ma from her community to join local and national fairs including the Otop (One Tambon One Product) festival organised by DCD in Muang Thong Thani. Over time, she began to notice a problem with her community's products.

"Our pha khao ma looked like products from provinces. It was hard to tell if this fabric was made by our group or by weavers in Kalasin, Maha Sarakham or Roi Et. Our pha khao ma did not have character nor did it have a selling point," she said.

Therefore, she began to look for a solution and an opportunity arose when she attended a workshop organised by Thailand Textile Institute for handicraft groups in five provinces in the upper part of the Northeast. She was impressed by a series of videos -- created by Thailand Creative & Design Centre -- teaching SMEs how to run a successful business.

"I knew from the moment that 'change' was the keyword. I needed to improve our pha khao ma. I wanted our products to have natural colours. I had to change the materials of dye from chemical colours to natural colours," she said.

She visited old weavers in her village to find how they dyed cloth in the old days and the information surprised her since she learned that the dye material could be found abundantly in her community such as fruits of mak kho khieo (a kind of fan palms), tree barks of ton chomphu pa (watery rose apple or bell fruit trees) and mud in the Mekong River. The elderly told her that mud would also soften the texture of fabrics. In the past, people left their cloth in the mud where streams flew to the Mekong for seven nights.

Hence, she began her search for those places. Over time, many places where old people used the mud for dyeing cloth started to disappear because community expansion meant that their land was either developed or refilled. 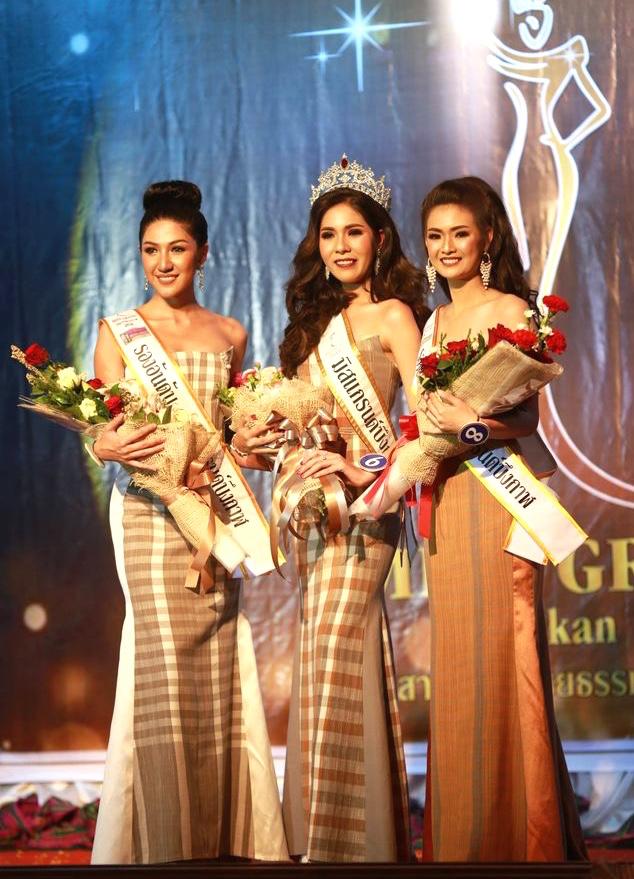 "The elderly advised me to use mud in my rice field. I also collected mud from several places in my community. Surprisingly, mud from different spots gave different shades of grey. I personally like the grey colour, so I thought I would create a new style of pha khao ma based on grey and white," she said.

Then she thought about finding a name for the group that would be easy to remember. Of the 10 names in the list, the group members voted for Dara Nakhee. Dara means star and it was also the name of Somporn's husband while Nakhee refers to Naga, the mythical serpent-like creature that locals believe resides in the Mekong.

After having a group name and new natural dyed colours, Somporn also wanted to create new pha khao ma patterns. She did not want the typical pattern of even-sized chequers but instead, she wanted it to be uneven.

Her first pattern was a cloth with small chequers at the start that gradually became big chequers in the middle and then returned to small chequers. It was easier to draw the pattern on paper than to find weavers who were willing to change.

The weavers, most of them old women, refused to weave the new pattern. They reasoned that it was too complicated and one of them even got mad and threw a yarn quill at Somporn.

"I smiled. I did not get angry at them. I knew that it was new to them and I needed to be calm and patient," she said.

She also learned to adapt. She slightly changed the pattern to make it less complicated. With her soft-spoken approach, the old weavers finally began to cooperate and the group was able to produce pha khao ma consisting of a big-to-small chequer design.

Initially, she tested the waters by producing only 40 pieces and displayed them in a booth of a local fair in Bueng Kan city. The naturally dyed pha khao ma of Dara Nakhee sold out like hot cakes although the price was high -- 500 baht a piece compared to 95-150 baht for a typical piece pha khao ma.

At first, people stopped at the booth because of the earth tone colours. Then, they became amazed by the unique pattern and when they touched the cotton fabric, they also became impressed with the soft texture. 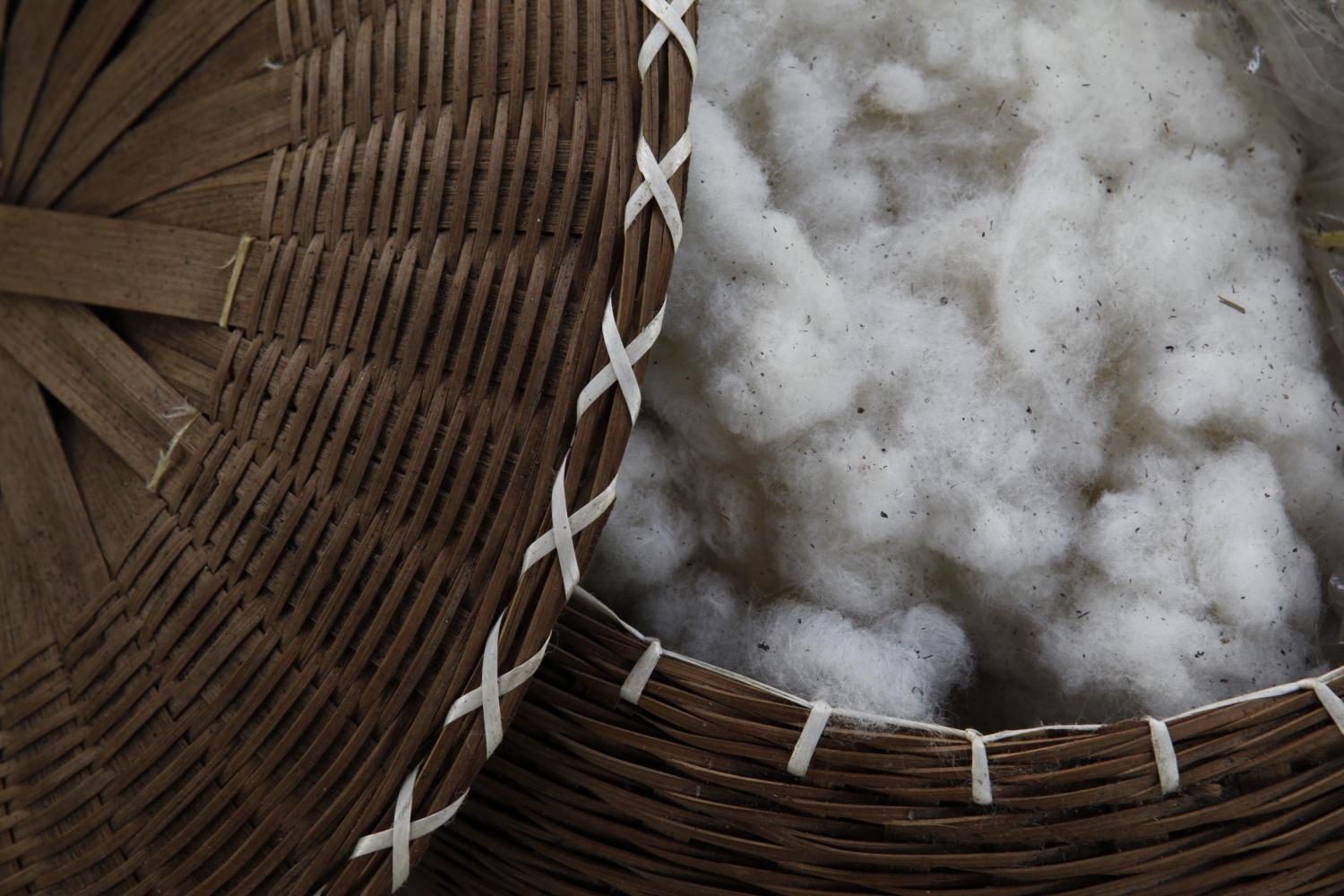 "Customers liked our products and they bought all of them even before the opening ceremony," said Somporn.

Such success only empowered her vision and she gained more respect from the group, especially the experienced weavers.

Within the first year, she created 12 patterns, one pattern every month. Each style had a name voted by the group members such as lai phuwa (the governor pattern) because it was created for the governor, lai song phang Khong (two riverbanks of the Mekong) or lai ta-yai (grandpa and grandma).

With the popularity of the new designs, other communities also wanted to have the same products, so they copied the patterns. Somporn's solution was not to sue them. Instead, she gave the 12 patterns that she had created for public use to the office of DCD in Bueng Kan. The officials now teach others to weave the patterns to help upgrade their fabrics.

"The creativity is in my head. I do not mind if they want to duplicate my work. If they like the designs, they should make them right," she said.

Besides being creative, Somporn also designs clothes for men and women.

"We produce only six pieces of clothing per collection with the sizes S, M and L. I do not like to mass-produce clothes. I want our products to be unique. It is like a limited edition," she said.

"I care for our environment. I do not want us to produce waste, so I create useful goods from the leftover fabric we have," she said. 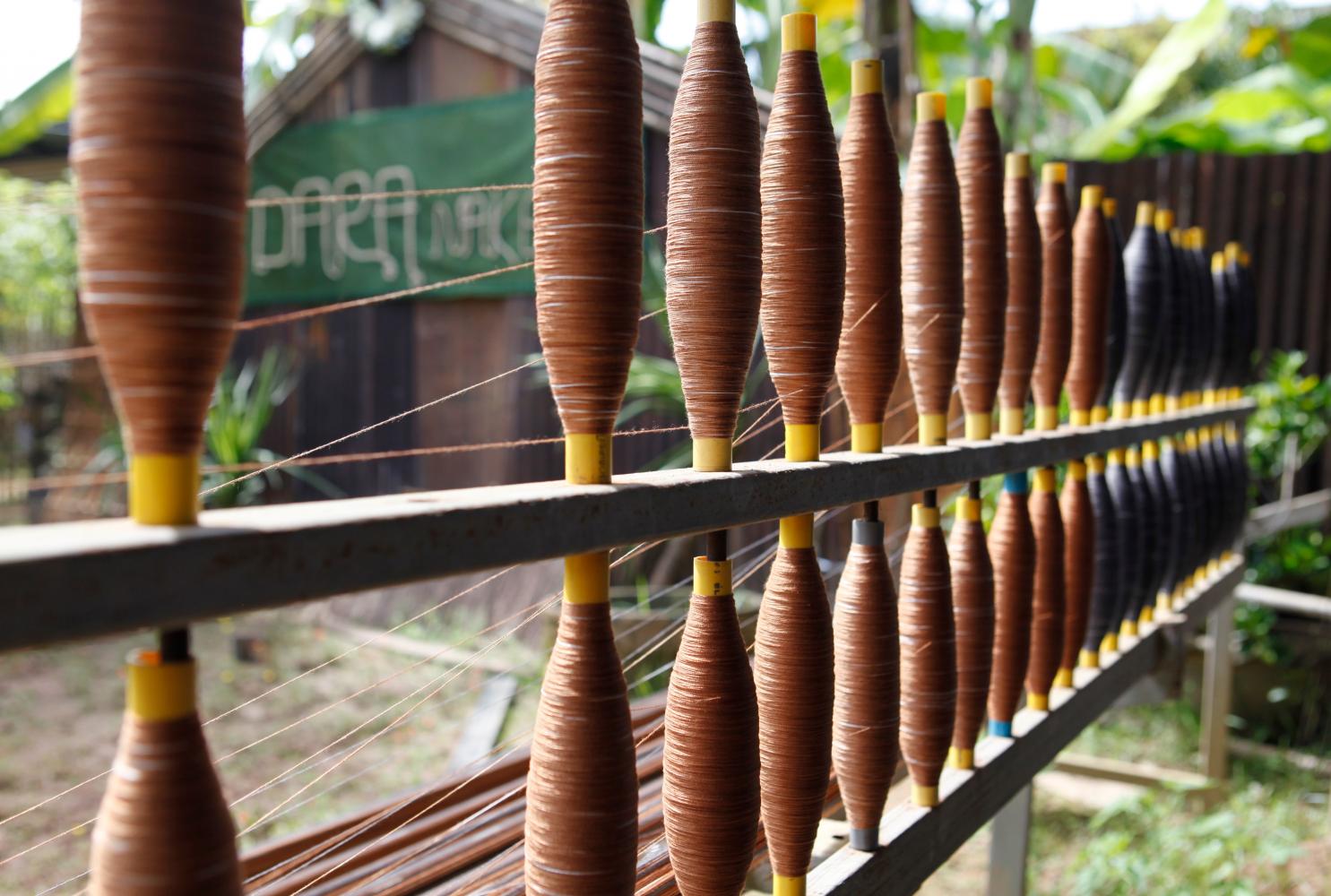 After dyeing, yarn is ready to be woven by a loom. Karnjana Karnjanatawe

At present, the Dara Nakhee Weaving Group has about 70 members, up from 30 when it started a couple of years ago. Somporn also renovated her house to be a showroom, a workspace and a learning centre. Visitors can see how locals spin cotton balls to yarn or learn to dye yarn in natural colours and fermented mud before weaving cloth.

Over the past year, Somporn has been planning her retirement and she will let her daughter, Suphattra, 24, lead the weaving group. She will be the third-generation to keep the community's treasure alive.

"I am proud that the mud cloth of Dara Nakhee not only created jobs for our community but also brought people from near and far to visit our Sa-ngo village. We have made a remarkable achievement. When I look back, it always makes me happy." 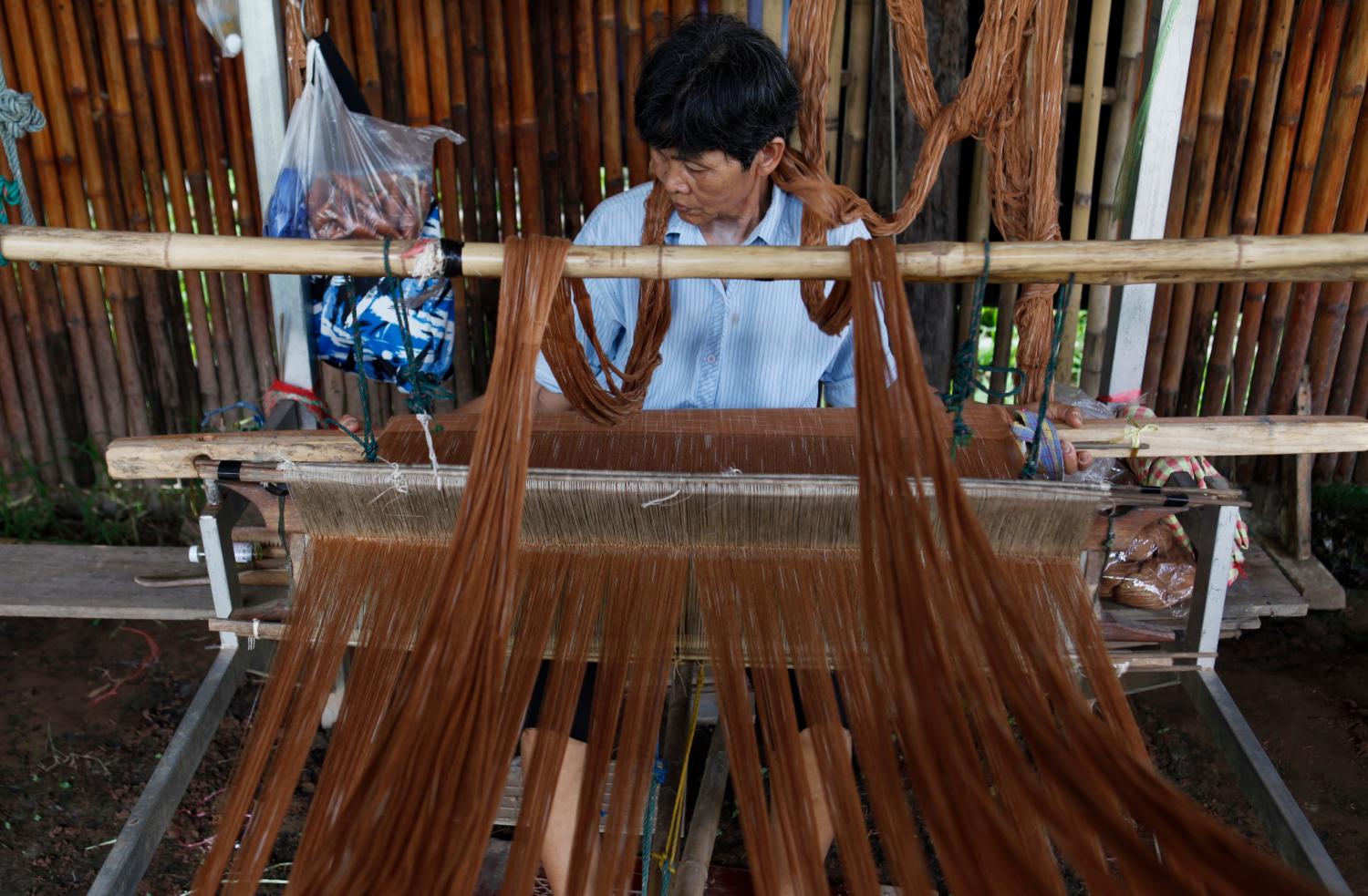 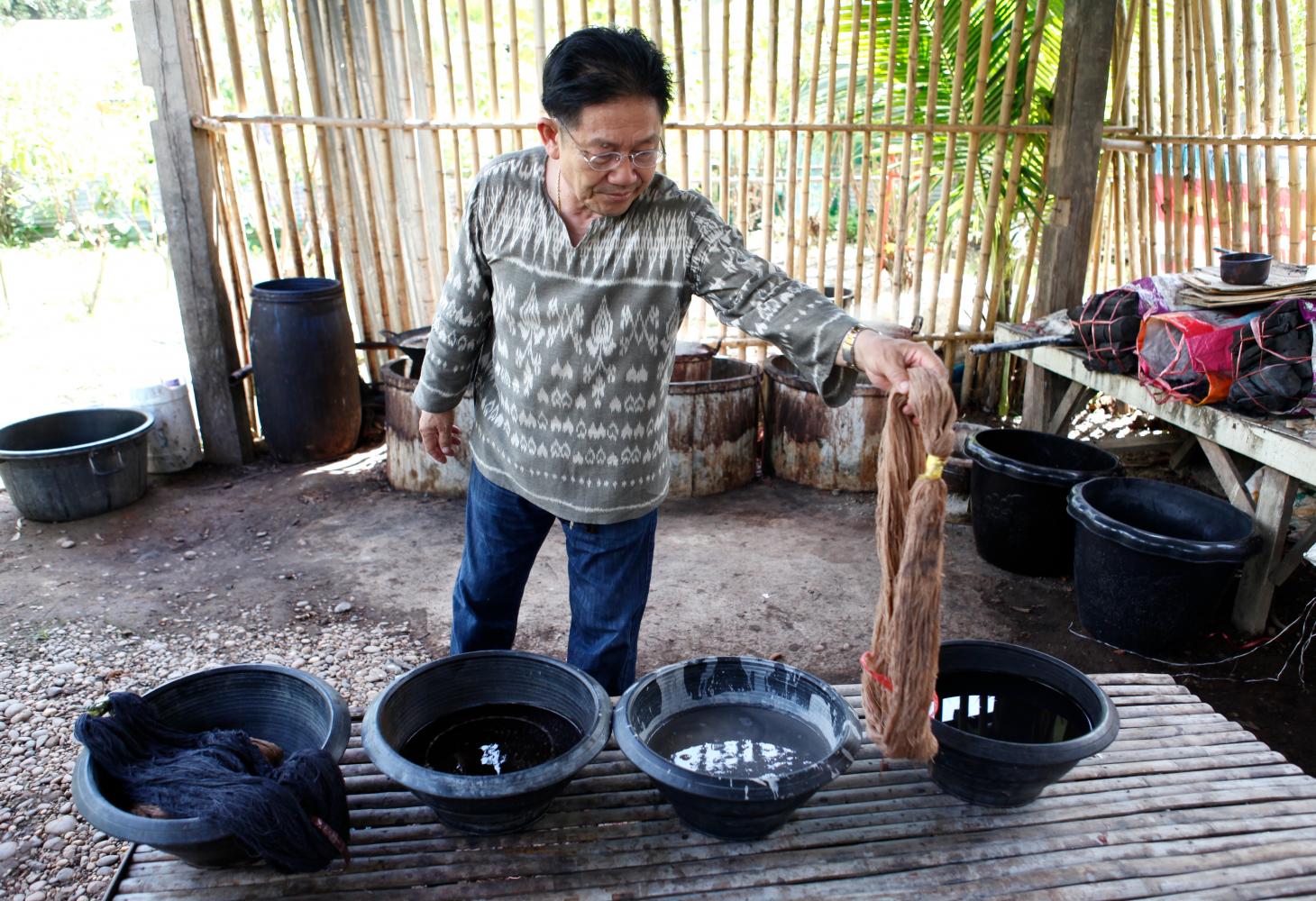