It is an annual practice for Prayadpon Kaewnornin, 67, and her sister Maliwan Sarapat, 59 -- farmers in Sakon Nakhon -- that after the harvest season in November, the two will carefully select the best of their rice for a national rice contest.

For years, their rice has won the first place prize in the province but it has been unable to beat others at the national level. Their wish for the top national prize had never come true until recently.

In fact, Prayadpon's rice was given the honour of the country's best jasmine rice at the 38th event organised by the Department of Internal Trade of the Commerce Ministry.

"When I was asked to go to Bangkok for the award ceremony, I thought my rice may win an award or perhaps at least an honourable mention," said Prayadpon.

She was excited as the trip was her first visit to the capital. She has worked in a rice field all of her life, as her parents did. She joined the award ceremony with her adult daughter and sister. During the ceremony, they saw other farmers receive honourable mentions and the runners-up awards on the stage. Then, the name of the winner was announced.

"I was stunned in disbelief when I heard my name."

Prayadpon slowly walked to the stage and received the winner's plaque from Commerce Minister Jurin Laksanawisit. She had a broad smile hidden under her face mask. The winner was also presented with 80,000 baht and Prayadpon plans to spend some of the money to upgrade facilities of her rice farmer group. 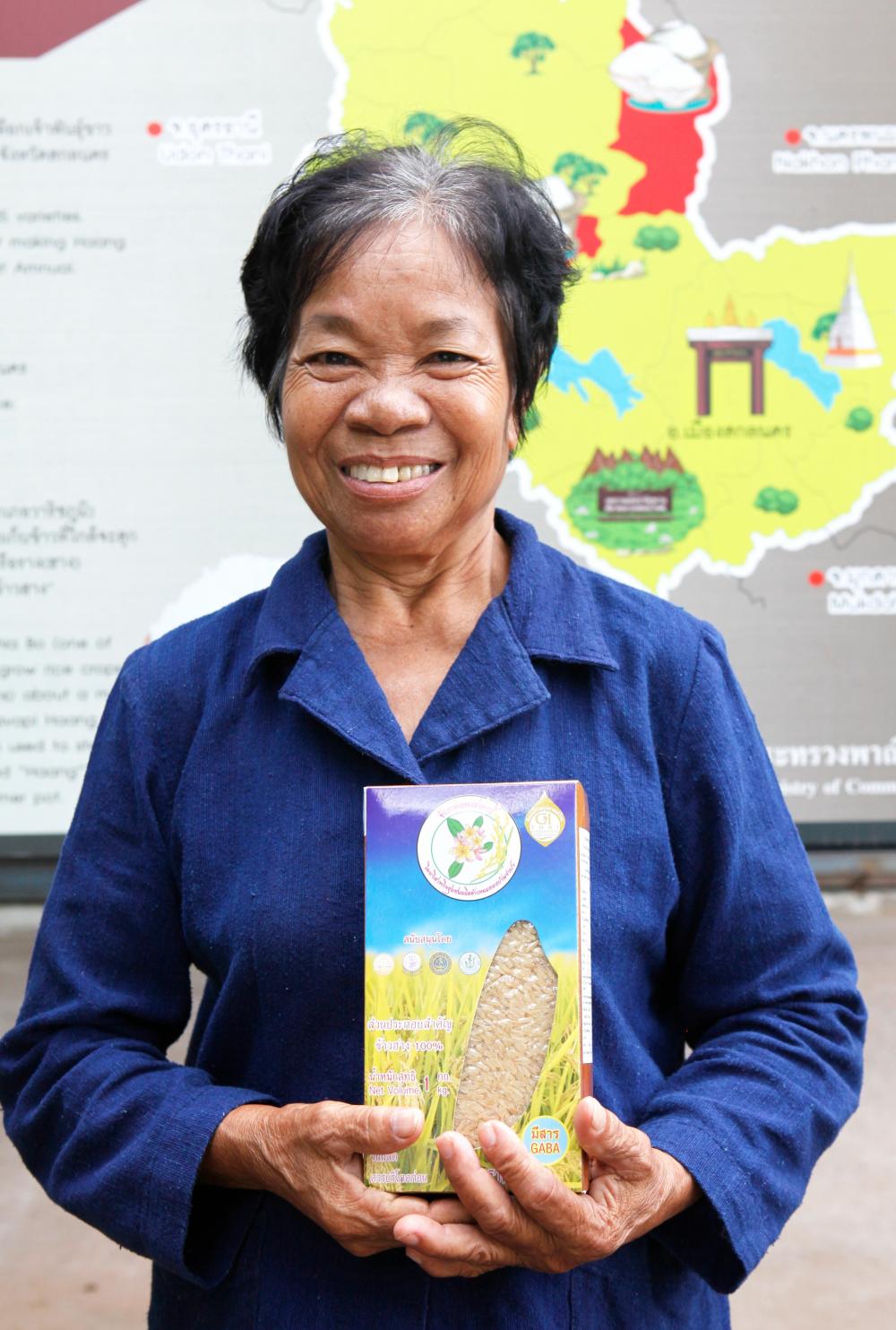 Prayadpon and her sister Maliwan co-founded the Khao Hom Thong Community Enterprise in Ban Champa. Their village is in Waritchaphum district, about 600km northeast of Bangkok. The group was founded in 1997 and at that time, the focus was to produce cloth weaving as supplemental income during the off-season.

However, the earnings were still low and so the group looked for other opportunities. As a result, the group started to produce khao hang, a traditional Isan germinated brown rice based on their strength in growing jasmine rice in a natural and organic way. In 2005, the weaving group was renamed to its present title and the group's membership gradually increased from 30 to 50 today.

"Khao hang was the old wisdom of our ancestors who tried to find a solution when villagers did not have enough rice to eat," said Maliwan, the group's president.

The story can be traced back about two centuries when the Phu Tai ethnic group crossed the Mekong River from Laos to settle in Ban Na Bo in Waritchaphum district. During a bad year, the villagers ran out of rice before harvest and based on the old wisdom, the group's leader Thao Pha-in decided to harvest rice before it was fully ripe. 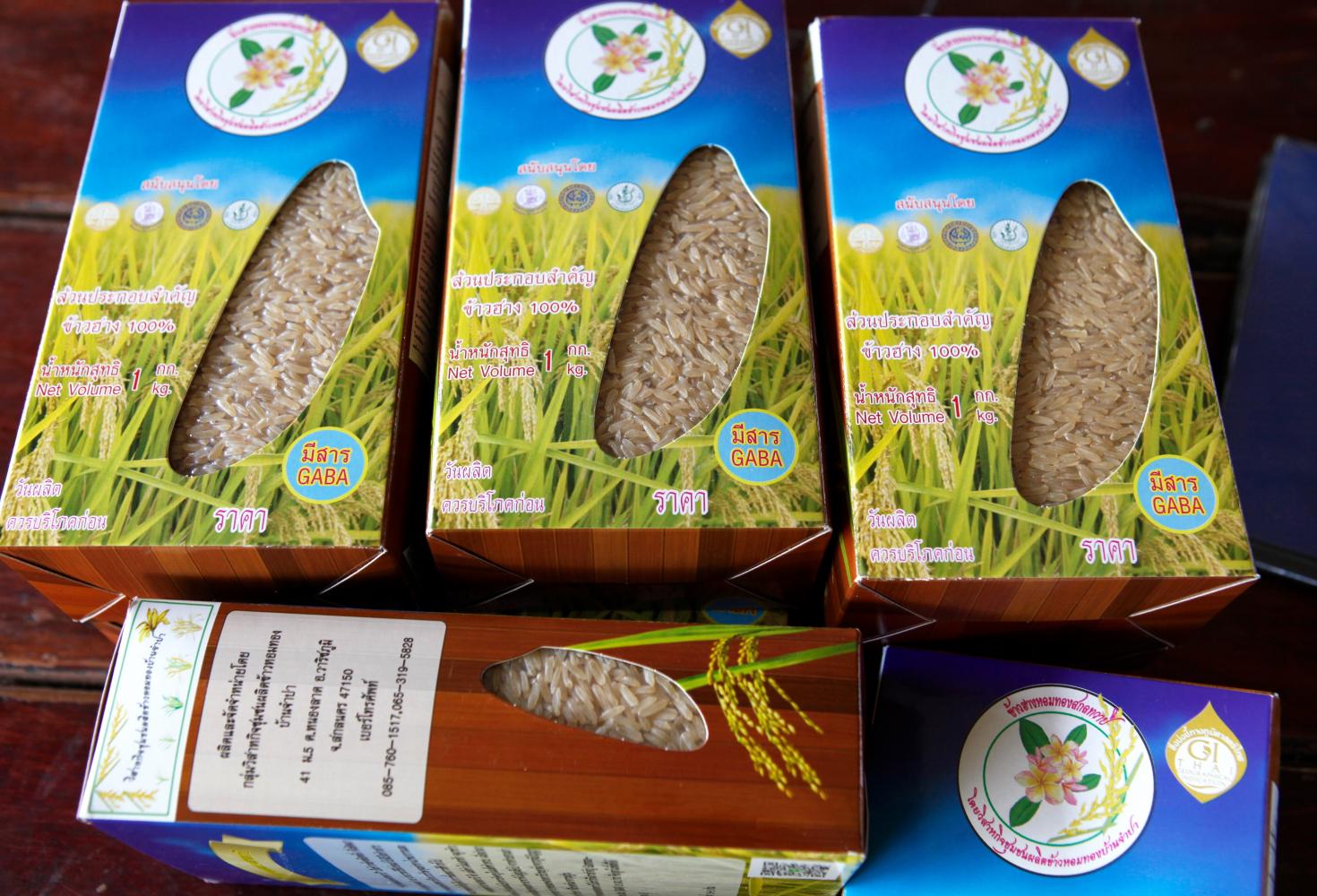 A package of 1kg of khao hang or khao hom thong. Karnjana Karnjanatawe

The rice was ripened through a germination process, a technique that has been passed on through generations among farmers not only in Waritchaphum but also other parts of Sakon Nakhon and even neighbouring provinces including Kalasin, Khon Kaen and Maha Sarakham.

The method of making germinated rice requires time and effort. According to Maliwan, after the rice is harvested, the unhusked rice will be soaked for two days and then it is allowed to sprout for one day. After, the rice is steamed for 40 minutes on a traditional stove called tao hang in the Northeastern dialect. Next, the rice is dried under shade and the last step is to unhusk the rice.

After the husk is removed, the golden brown rice known as khao hom thong or khao hang is revealed. A study by the Faculty of Agro-Industry of King Mongkut's Institute of Technology Ladkrabang found that khao hang is high in nutrition, rich in vitamin E and B, folic acid, pantothenic acid, niacin and minerals. The germinated golden brown rice is also high in gamma-aminobutyric acid (GABA). Meanwhile, research by Kasetsart University also found that khao hang can help prevent Alzheimer's disease, reduce stress, insomnia and slow down the damage of brain cells.

"Khao hang is our flagship product. It adds value to our jasmine rice," said Maliwan. They can sell a kilogramme of hang rice for 80 baht, much higher than the average of 35 baht a kilogramme. Khao hang or khao hom thong is registered as a geographical indication (GI) rice of Sakon Nakhon. It is formally known as khao hang sakon thawapi. On average, the group can sell up to five tonnes of khao hom thong a year. 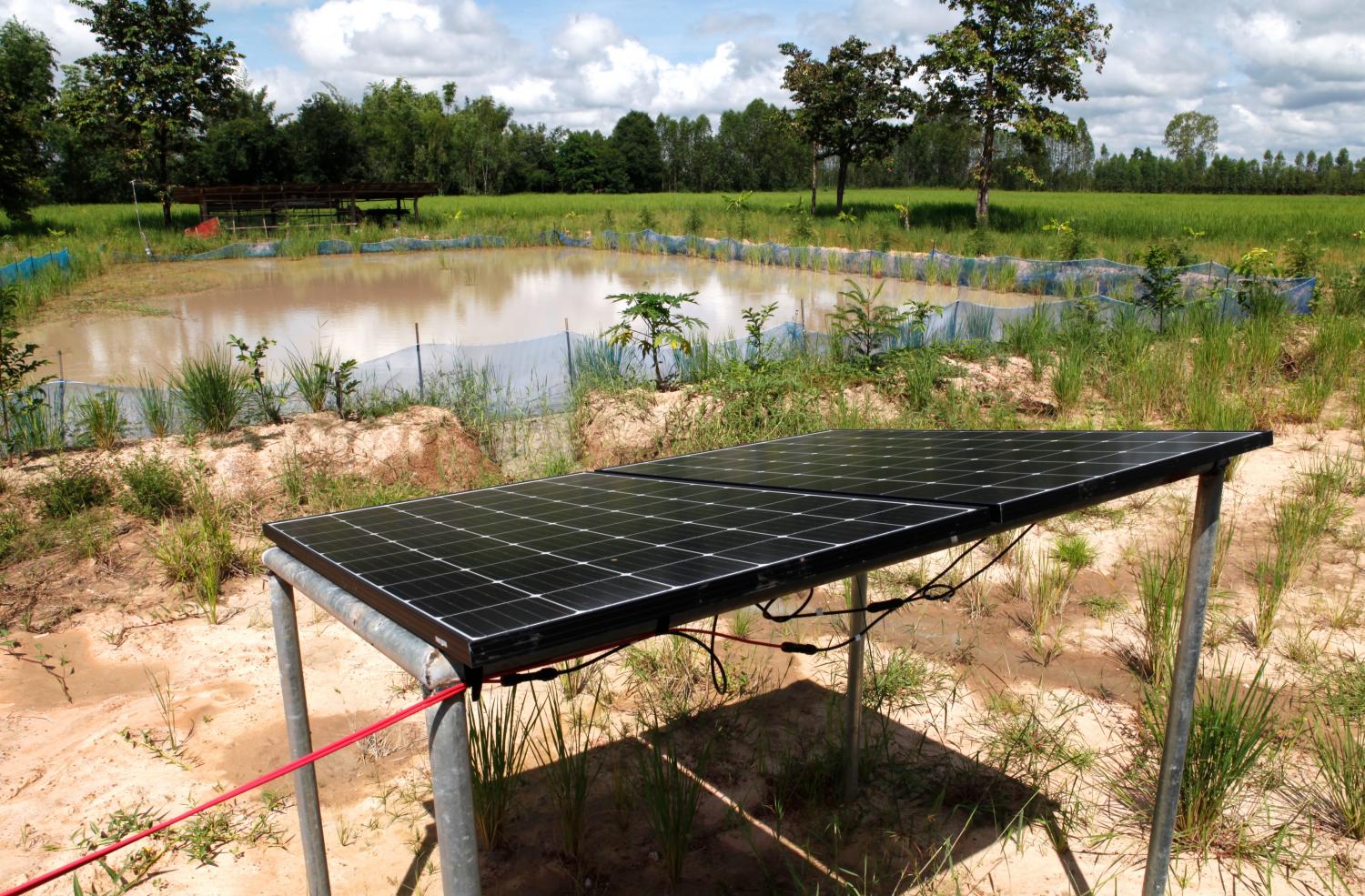 The solar cell panel is used for pumping water to the rice field. Karnjana Karnjanatawe

"We eat our own rice. There is no reason for us to harm our health by using any hazardous chemicals," said Maliwan.

"We are fortunate that we have not faced destructive rice diseases so far," said Prayadpon.

However, they did face a crisis two years ago when a large number of golden apple snails munched their young rice plants. To get rid of the invasive pests, the sisters picked the snails and put them in a sack of fermented fertiliser. They also used their hands to pull out weeds from their rice fields.

In their rice fields, 23 rai in total, there is also fish and crab. Sometimes they catch them for food and also share it with their neighbours.

During their free time, they weave cloth or sedge mats for extra income. The farmers grow rice once a year as they have to wait until May, the beginning of the rains, to prepare their rice field. The paddy is covered in weeds and dry rice straws from the last harvest. "We do not burn rice straw and stubble. We use them as fertiliser," said Maliwan.

At the beginning of May, they will submerge their paddy for a week to rid the fields of weeds and dry rice straws. They will then plough the land, making it ready for the new planting season.

"With this method, we do not have to add much fertiliser because those rotten plants are good food for the rice to grow," said Maliwan.

When it is harvest season in November, they will carefully use a sickle to cut the rice stalks. Each stalk should be full of healthy rice grains and the yellow hulls must not crack. When polished and cooked, the rice must have a fragrance like the aroma of pandanus leaf, the qualities that made their rice become this year's winner. 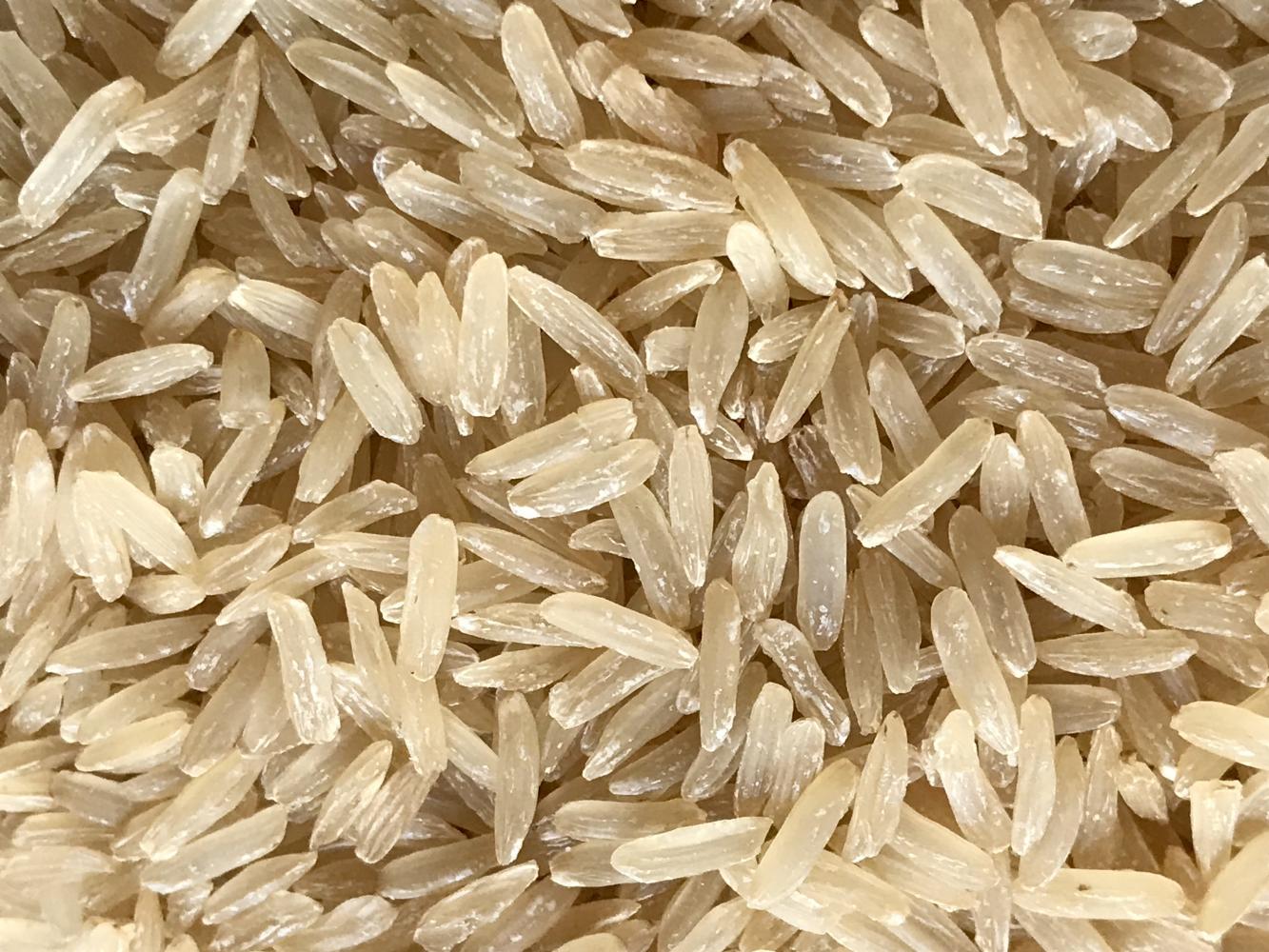 With experience comes the ability to select only those beautiful stalks for the national contest. The competitive process takes months, starting from the level of district contest to provincial, regional and eventually the national level.

This year, the farmer group of Ban Champa plans to also install a new milling machine, replacing the old and broken one. The group also plans to have a self-sufficiency learning centre and farm by using the rice field of Maliwan as an inspiration.

Maliwan plants vegetables and herbs in her farmland as well as have a pond dug. She also has a solar cell panel for her water pump.

"Our plan is to follow the late King's sufficiency economy model. We will promote the knowledge among our members as well as apply for organic certification to make it official that our khao hom thong of Ban Champa is an organic rice," said Maliwan.