Abuse catches up with pair

A seven-year-old boy rescued from a violent home has dispelled doubts over who was responsible for a savage beating early this month.

Nong Meelo, now in the care of a welfare home in Nakhon Phanom after his birth father laid a police complaint that his birth mother and stepfather had abused the boy, upheld his father's version of events.

He said the pair had rounded on him in a "scrum", as one Thai news report put it, beating him and kicking him on Feb 3 until bruises covered his body. The domestic drama captured news headlines last week. 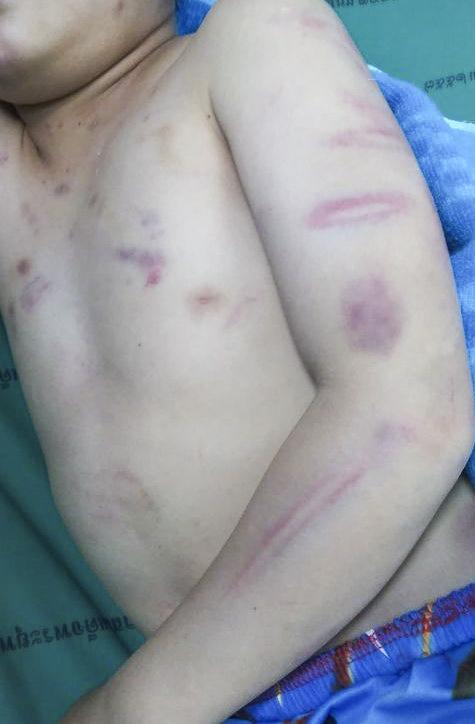 Earlier, his mother, Sudarat "Lhin" Muntha, 27, told police she alone was responsible for assaulting the child, saying she wanted to punish him for stealing.

She denied her husband and the boy's stepfather, Suwat "Man" Kingsamut, 33, with whom she sells lottery tickets behind Wat Phra That Phanom temple in That Phanom district, laid a hand on the child, and portrayed the relationship between the pair as close and loving.

Meelo's birth father, Thawatchai "Bobby" Thaenthong, 38, went to police after a neighbour alerted him to the condition of the boy, spotted close to the temple.

Bobby, who broke up with the child's mother four or five years ago, said he turned up on his motorbike, saw the lad was covered in bruises, and urged her to take Meelo to see a doctor. She screamed abuse at him.

Unhappy with that, he went past again on his bike and urged the boy to climb on the back. He took the child to That Phanom Crown Prince Hospital, and laid a complaint with police.

"Meelo said his stepfather Man hit him with a fishing rod and clothes hanger to force him to say he stole the money for me. That's just not true. I have never taught my son to steal," Bobby said.

Separately, a relative alerted the Paveena Hongsakul Foundation about the boy's plight. Kanyaphak Thanjai, 33, said she was sure the boy had been abused many times by the pair. Meelo's stepfather liked to threaten people with a gun, she said.

Called in by police, Ms Lhin admitted hitting the boy, but insisted she alone did it, contradicting the father's claims that it was a joint effort. She said she struck Meelo with a coat hanger and kicked him after he was caught stealing money.

Police also went to see Bobby, a part-time photographer who runs a grocery store behind the temple. He said Lhin took the child to raise when the couple split up, and wouldn't let anyone from his side of the family near him.

"If she saw the child with his relatives Meelo would be beaten. I asked to take back the child to look after him myself but she refused," he said.

His mother, Sathien, 59, said her former daughter-in-law and Bobby met after he returned from overseas where he was working as a labourer. They lived together and had Meelo, with Ms Sathien helping raise the lad since he was young.

She said Lhin was aggressive and unpleasant. She later left home and started a relationship with Man.

News reports say Lhin's own family backed up claims that Ms Lhin was easily angered. Her father, with whom she has fallen out, said she hurled abuse at him, too.

Responding to the claims, Lhin said her ex-husband was trying to make himself look good at her expense. "Meelo told me his father was trying to make him steal. As far as my own father is concerned, we fell out after an incident involving his new wife." She was caught stealing a necklace and when confronted asked the father to put Ms Lhin in her place. "My father slapped me across the face," she said. She denied preventing her ex-husband from having access to Meelo.

"I told Man that if he loves me he has to love my son as well, and in fact he and Meelo get on really well," she said, showing reporters a picture of the two hugging. She said Man has stage five renal failure and needs regular dialysis. 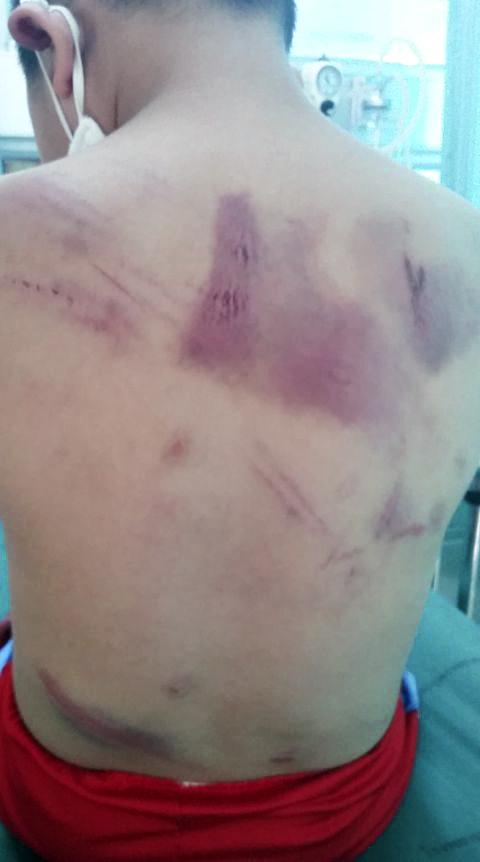 Despite admitting she inflicted a brutal beating on the child, Ms Lhin is asking for a second chance to raise Meelo. She promises she will not hit him this time around.

That Phanom police have charged her with restraining a child and depriving him of his liberty; and assault, posing a danger to the victim.

Pol Capt Chayaphat Powthicheekorn, a deputy inspector of investigations, said officers were waiting to talk to the child, and charges may be laid against his stepfather as well. Saengdao Aree, from the Social Development and Human Security Nakhon Phanom office, said Meelo was starting to look more cheerful after his ordeal.

Cops slow to bust their own

Netizens are praising a young woman in Trat who went to the aid of her grandfather, defrauded by local police. 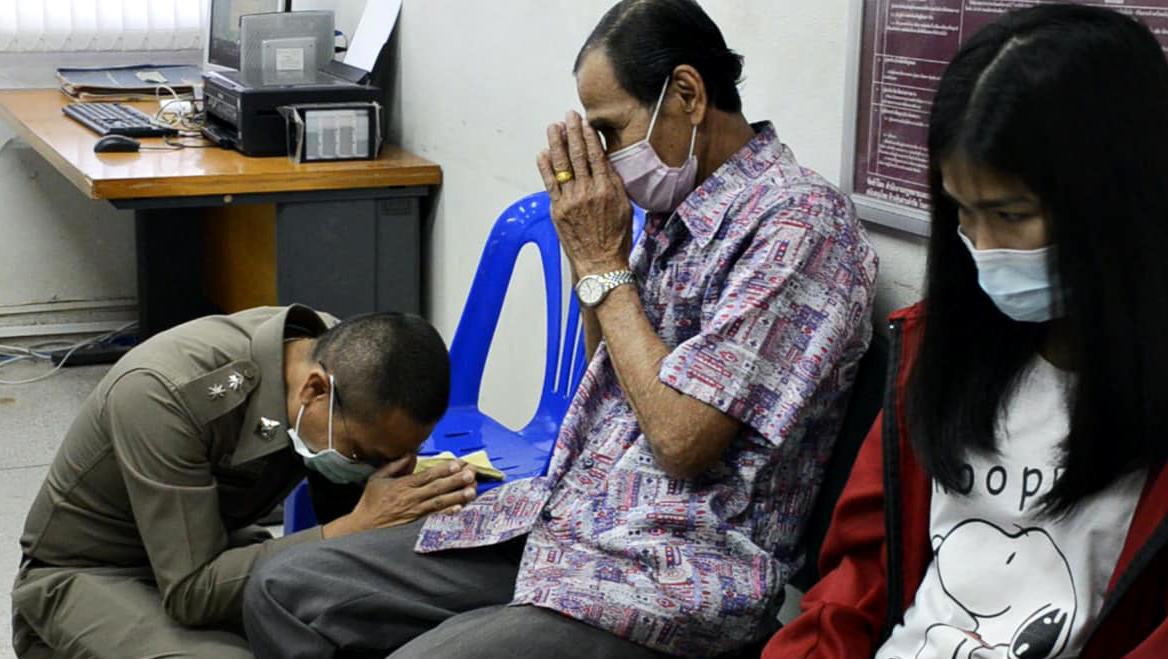 Aungsirin Setniyom glances at the cop who is begging her grandfather's forgiveness.

Aungsirin Setniyom, 19, an accountancy student, posted to social media about the family's ordeal as it pressed a complaint about the corrupt policeman. The post stung police into action, after she made repeated visits to Muang district station to no avail.

She said her grandfather, Jareh Setniyom, 74, was served with court papers in December telling him he was behind payments on a mortgage taken out over a title deed for 28 rai he had offered as security against a relative's bail.

His relative, Supat Wongthong, had sought his help with surety for his bail after he was charged with performing an indecent act and trespass. Mr Jareh, who felt sorry for his relative as he was still studying, handed over his title deed.

Mr Jareh said he did not know the land had been mortgaged. After looking into the matter with his granddaughter's help, he found the loan papers carried his signature, which had been forged as he never signed them.

He received a second shock when he discovered the person who took out the loan, obtained from a former local mayor and money-lender, was the police captain in charge of Mr Supat's case.

Pol Capt Kantapol Sakkaprom, the borrower, did not merely take the title deed as surety as claimed but used it to obtain a cash loan of 500,000 baht at 15 per cent annual interest. Mr Jareh's relative, Mr Supat, acted as witness.

Pol Capt Kantapol, who admitted the fraud and has come under pressure to quit the force, last week begged Mr Jareh's forgiveness.

Only two instalments were made before the police captain fell down on payments, with the result that the lender, Pichai Wisuthipaet, an ex-mayor of Nong Samet district, decided to call in the debt. He served Mr Jareh with court papers and threatened to have his land seized unless he repaid the debt.

Mr Jareh, who laid a complaint with Muang police where Pol Capt Kantapol works, said the policeman admitted mortgaging the land, and dividing up the money with Mr Supat, who has fled with his 300,000 baht share.

Initially Pol Capt Kantapol claimed Mr Supat needed to raise the cash to pay his bail. In fact, police admitted later that bail was not required, as Mr Supat had merely been informed of the charges. He also admitted forging the grandpa's signature.

Ms Aungsirin said her family laid a complaint with Muang police, but the matter failed to make progress. She went to see the station head, who told her he was unable to help as he was new in the job. Meanwhile, the accused policeman's wife is said to have pleaded tearfully with his boss to give him a break.

Finally Ms Aungsirin turned to social media to air her plight. After her FB post was shared widely, the superintendent of Trat provincial police stepped in to order the Muang district chief to take action, with the result that police were able to hand back the title deed to Mr Jareh on Feb 8, after compensation was arranged for the lender. The district police chief also apologised to Mr Jareh.

Lender Mr Pichai, who sent a lawyer to represent him, insisted the loan was above board. He said Pol Capt Kantapol had claimed the land owner was bedridden and needed the loan to pay his hospital bills. Nonetheless, he asked Mr Jareh to agree not to take legal action.

Mr Jareh said he would seek his granddaughter Aungsirin's advice on whether to pursue legal action against the bent police captain, who also faces a disciplinary probe.

The resourceful Ms Aungsirin also contacted Wasin Pongsiri, an adviser to the minister of education who is helping her liaise with the Lawyers Council. He warns that if the family does seek legal action, Mr Supat, the relative who fled, stands to be charged as well. The case continues.

A middle-aged woman who festooned her car with sanitary pads and underwear in a figurative protest has fled after police made her remove the items. 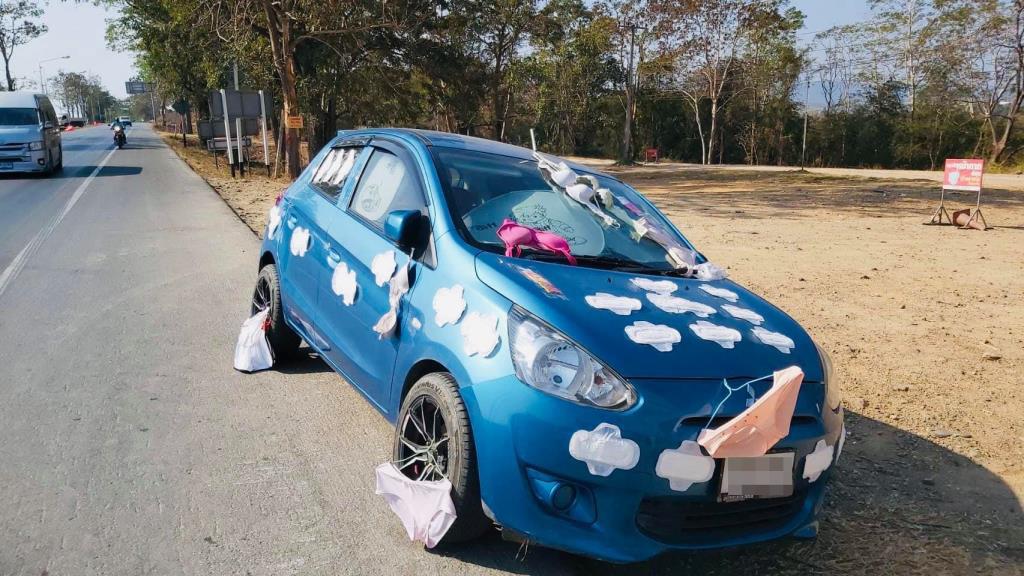 The car covered in sanitary pads and women's underwear.

Wang Nam Khieo police in Nakhon Ratchasima were kept busy last week after locals alerted them to sightings of a Mitubishi festooned with women's underwear and sanitary pads doing the rounds of town.

The first time, locals spotted the woman driving the vehicle around fresh market 79 early on Feb 8. Police called her over, spoke to her, and asked her to remove the items, as they posed an eyesore and could offend locals. Two hours later, locals called again to say the car had been left by the side of the road on Highway 304.

The owner, a 41-year-old woman from Chon Buri who is originally from Ubon Ratchathani, had been staying in the district for some days lamenting the state of the economy under Covid and the future of her marriage to an unfaithful husband, she told police. She attached the items to her car in protest, though how women's underwear and pads are linked to her ordeal is not known.

On the highway, traders say the woman turned up about 8.30am and started attaching the items to her vehicle, which she had only just removed when police stopped her two hours earlier. A trader who sells goods opposite said the woman took a picture of her handiwork, grabbed her bag and hopped into a minivan heading back to the district. She has not been seen since. "I wanted to ask what it was all about but didn't get a chance as it all happened so fast," she told the media.

Police who attended the scene on the highway, and removed the items, say they found 33 sanitary pads, three condoms, six singlets, and eight pairs of women's underwear stuck to the locked vehicle. Inside the car, they found a kitchen knife, documents, a pack of instant noodles, a makeshift mattress, hot water flask, mortar and pestle.

Pol Lt Col Niran Thawanphuwarach, an inspector who responded to the first call-out, said so many locals called the station about the oddly adorned car that the phones almost melted. Locals said they had spotted the vehicle in the market a couple of times before, when the driver had strung a bra from the windows.

Police tracked the vehicle to the woman's family home in Ubon, where her mother, Bang Khunthakan, said her daughter had been suffering from stress and had recently spent six months under psychiatric care. She had fled home recently and they have not heard from her since.