I scream, you scream, we all scream for ice cream, especially in this hot and humid weather. The heat is back and nothing better to cool down than with a lick of ice cream or a frothy milkshake.

Quints ice cream in centralwOrld started off as "Quintessential ice cream", but on account of being too long, owner and chief ice cream maker and taster Pratthana Suwatthanaphim shortened it to Quints.

A passion project born a few years ago, Quints was the sweet obsession in Pratthana's baking studio, where she hosted classes. Covid hit her business and so she started selling ice cream. But overnight, Quints became popular due to word of mouth and soon became a pop-up store outside Isetan, where there would be serpentine queues for the ice cream. One thing led to another, and now Quints has a permanent spot. 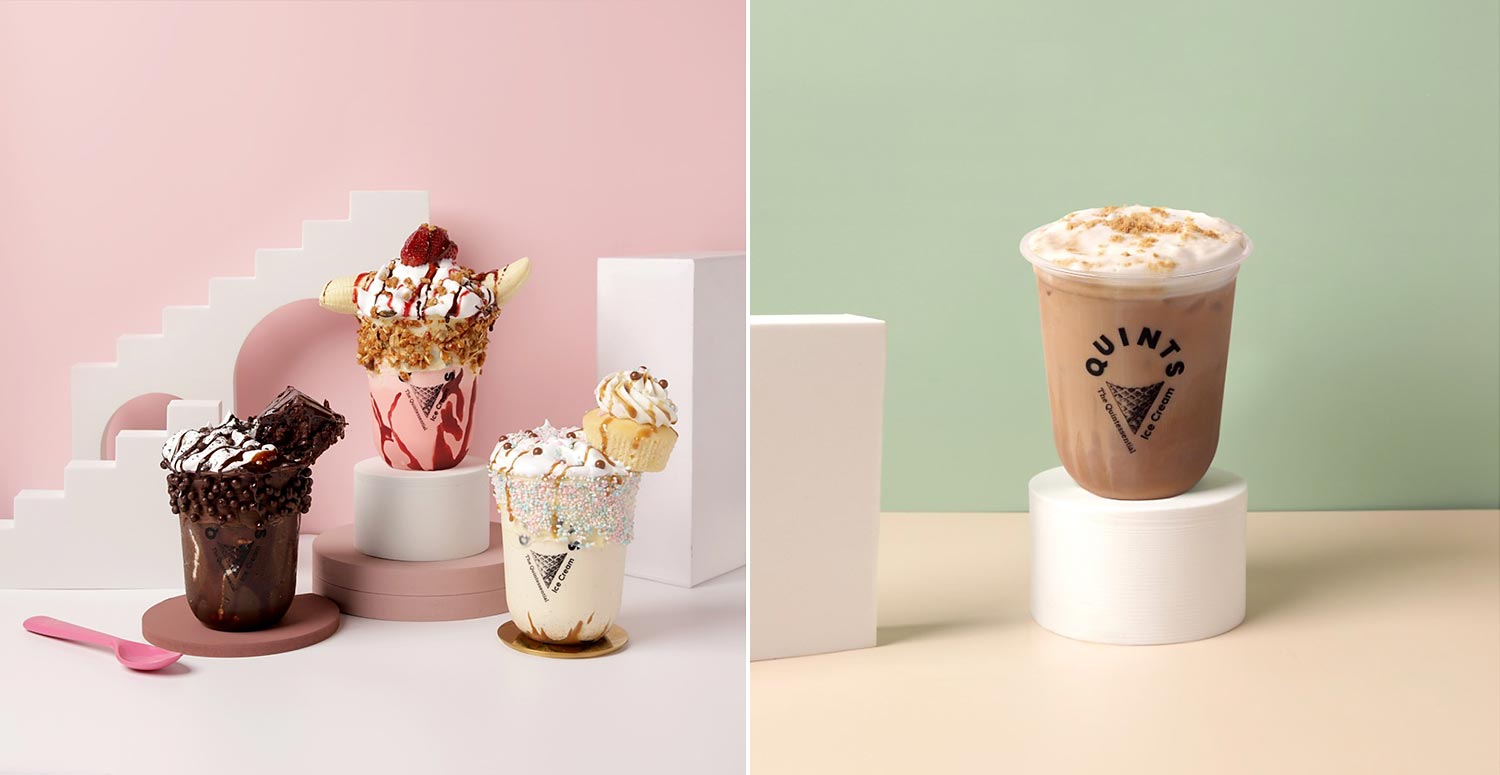 "My style of baking is to use the most premium quality ingredients and I make everything myself from scratch. There are no additives, no chemicals, no added colouring or flavouring. Everything is natural. The same goes for my ice cream. For example, my fruit-based ice cream is made from 100% fruit," says Pratthana.

Each Quints flavour is rich and strong. "I wanted it to be substantial and if you're going to choose chocolate fudge, it should taste like it," says Pratthana. Special flavours range from Red Ruby, which is pomegranate chocolate, raspberry rose coulis and chocolate pearls; Butter Popcorn, which is popcorn (duh!), caramel swirl and toasted macadamia; Honey Lavender; Lychee Raspberry; and Brown Sugar Milk Tea, which has a Taiwanese milk tea base and brown sugar boba. The all-time favs are Cookie Monster, Chyrsanthemum, Death By Chocolate, Earl Grey, and a host of others. Scoops can be big (B130 for one scoop) or small (B190 for two scoops) or you can get six tubs for B780.

Apart from ice cream, Quints also specialises in milkshakes, the London Fog (B220) being a favourite. "I love earl grey and so was trying to recreate something Thai people would really like. Since we Asians love our milk tea, I came up with a recipe for a premium of earl grey milk tea topped with an earl grey ice cream. So it's like an ice cream float," says Pratthana. The London Fog is also available with just the milk tea for B149. 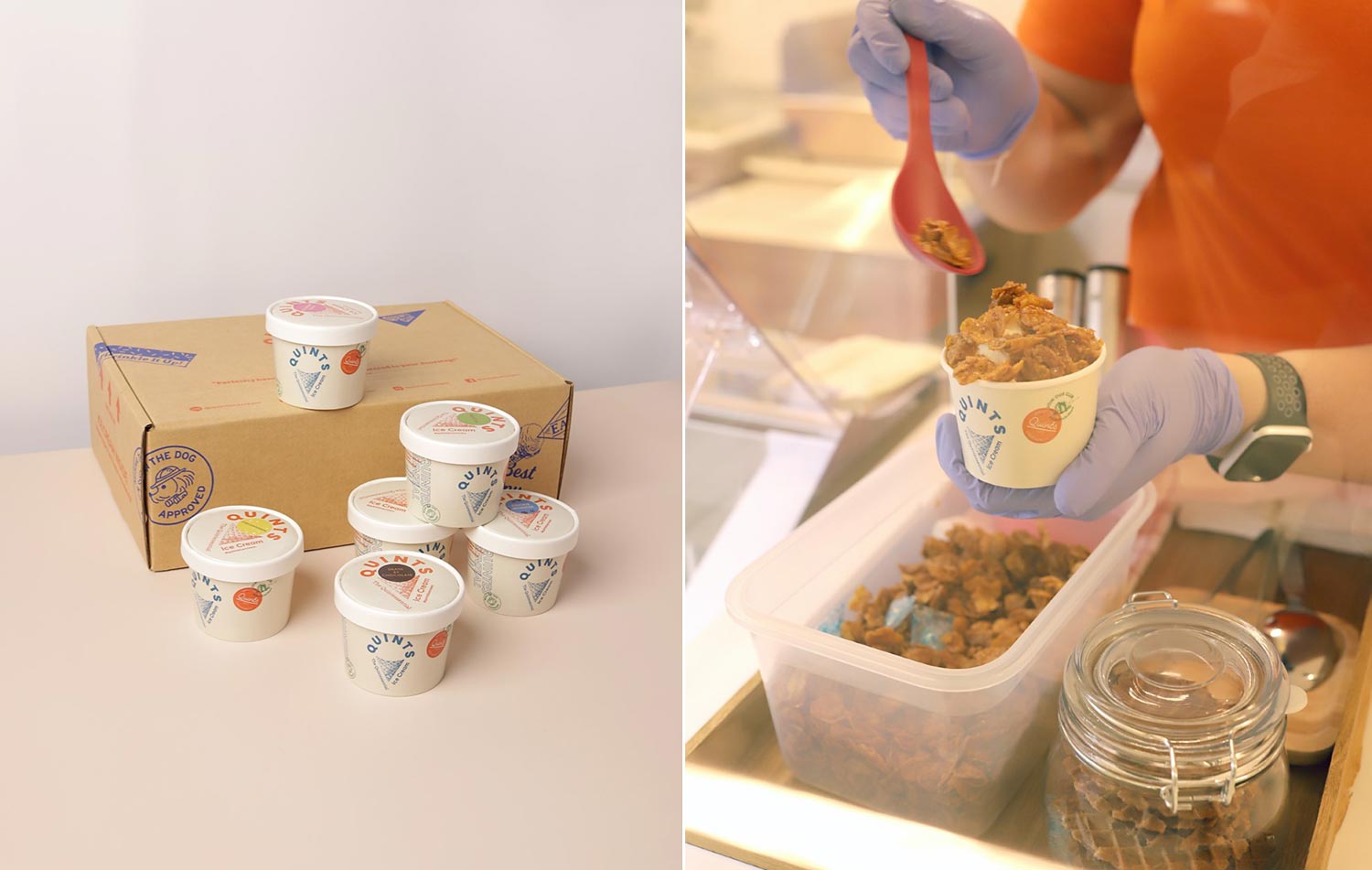 If their milkshake selection doesn't grab your fancy, build your own! Choose a flavour of ice cream, pick either a dark chocolate fudge or a salted caramel sauce, and decide on the toppings, which range from rainbow sprinkles, Oreos, granola, chocolate pearls, Lotus biscoff, pretzels and mini marshmallow. Phew! And this massive milkshake, which is a meal by itself comes at the price of B290.

However, if you are a dessert for dinner kinda person, get the Croissant sandwich (B195). You have a choice of building your own here, too. Choose an ice cream flavour, pick a sauce and decide on the toppings. You know the drill. The croissant is baked in-house, FYI.

All the bakery items and ice creams are small batch and almost every week Quints has new flavours, so there is no excuse not to scream for ice cream!