Teens with a point to prove

Three Nakhon Nayok teens won praise for asking staff at a roadside checkpoint to test them for drugs, after their teacher questioned their honesty.

The lads, aged 15, turned up on March 1 at a checkpoint set up by the Ban Na district office and volunteer defence corps. The staff were calling over motorists to take a drugs test as part of the district's policy to keep youngsters clean of drugs and send users to rehab.

Staff at the checkpoint were stunned when the youngsters, who attend a school nearby, asked if they could test their urine for drugs.

Schoolmates Natthaphong, Siththichok and Chattuphak said they were out on their bike and happened to see the checkpoint testing station so approached.

"Uncle, test my urine, please," they called out to the officials, using a youngster's term of endearment for his seniors. The officials laughed but obliged. As the lads expected, they turned up clean for drugs.

The officials said youngsters do not normally volunteer for a drugs test but in this case the youngsters had a point to prove -- their teacher had asked them why one of their number had missed a random drugs check at the school on Feb 15 and suggested they might have something to hide. "So you are meddling with drugs are you?" the teacher had said, according to the boys. They denied taking drugs and the teacher said nothing further, but the boys, peeved to have come under suspicion, decided they would prove him wrong.

The teens asked staff at the checkpoint to issue them with the test results in writing. However, that wasn't possible so the staff agreed to pose with the boys for a picture to prove they had been there.

Publicity surrounding the saga led to criticism for the teacher, as netizens rounded on him for judging the boys by their appearance and assuming they must be up to no good. The boys presented the photograph to the teacher the next day but he did not say anything.

An Amarin TV crew visited the lads, one of whom lives close to Wat Klong Sai in Wihan Daeng district of neighbouring Saraburi. Asked by the media if they were just trying to get back at him, they denied it. "We just wanted to prove our innocence, but also want to say sorry to our teacher after he was criticised when the story went public," they said.

The headmaster called in both parties for a chat about the problem. The boys' teacher said he was worried about the teens as one failed to turn up to school on the day of the random drugs test. The school head, who filed a report to the district education office about the matter, said teens are upset easily, and urged teachers to talk more sensitively to them.

While sympathetic to the boys' plight, he said he regretted the incident after it blew up on social media. The teacher merely told the boys to steer clear of drugs but was hammered for being judgemental, he said.

Wirat Kongchum, 56, kamnan of Khao Perm sub-district, who was involved in setting up the checkpoint, praised the lads for their initiative. "They weren't just being exuberant youth; they were genuine in wanting it," he said.

A city woman injured when a motorcycle hit her as she crossed the road last year is urging police to charge the culprit, after the accident left her with serious injuries. 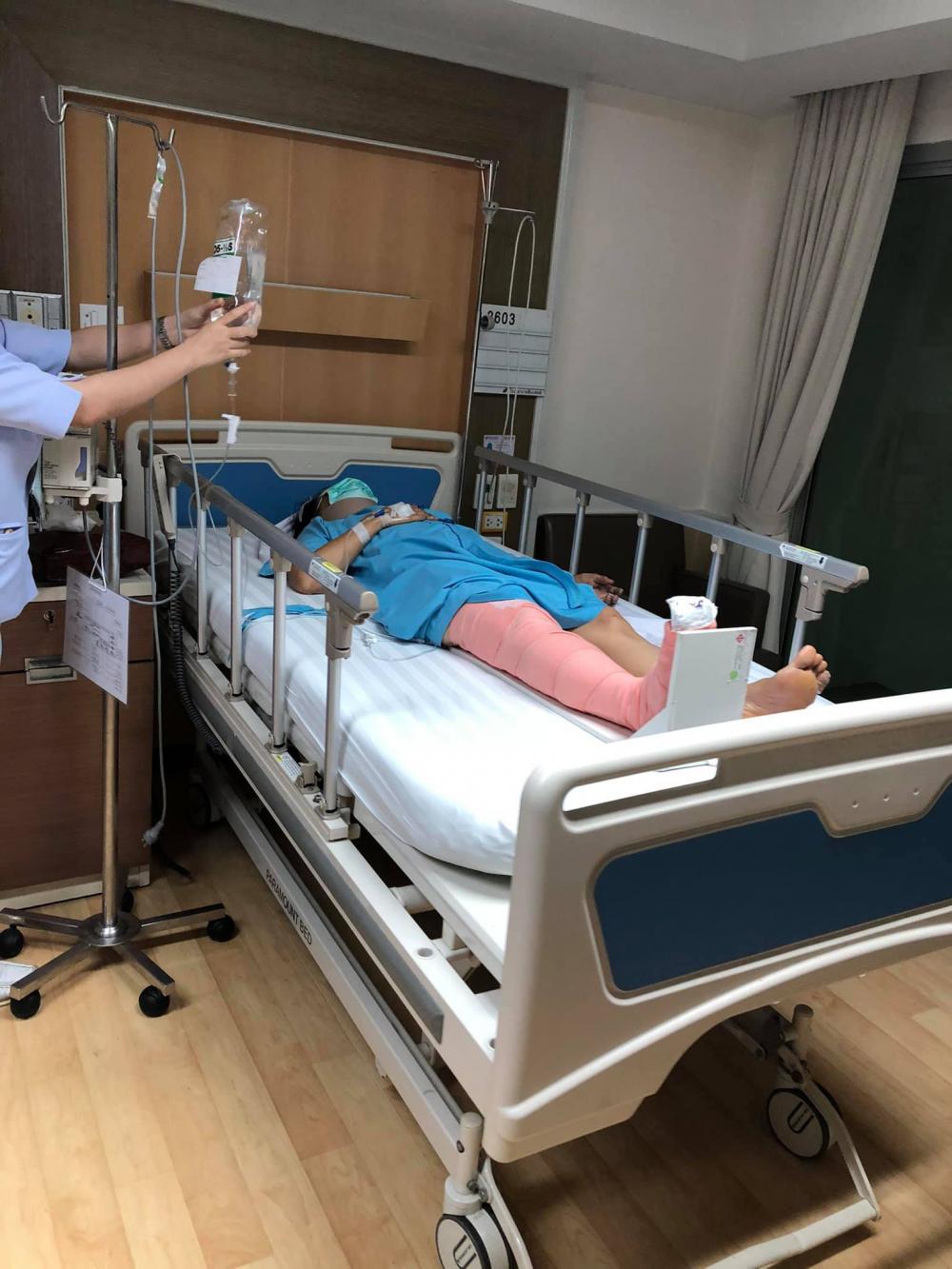 Wassana, 54, was crossing at the red light close to Nopparat Rajathanee Hospital in Kannayao district on May 29 last year when a motorcyclist struck her on his bike. The collision was caught on his own motorcycle helmet camera. "As he stood there looking at me on the ground, he claimed he was not in the wrong, and took off on his bike," she recalled last week.

The accident left her with a broken leg, dislocated spinal disc, broken shoulder bone, and broken toe. Treatment lasted nine months and set her back 400,000 baht, but the motorcyclist failed to visit her in hospital or accept any responsibility. When they met at the police station, he asked unsympathetically: "Why did you have to choose such an expensive hospital?" He also accused Ms Wassana of failing to watch she was going and asked if she actually wanted to get hit.

Wassana's daughter, Doungkamol Saithong, posted details of the accident on FB last week. She asked why Bang Chan police had yet to act even though the family had pleaded with them constantly to charge the man.

"They kept telling us we should wait, even though we presented all the evidence they need. Police said they have issued a summons twice, but months later the driver is still free," Ms Doungkamol complained.

Pol Lt Col Pawich Nilsuwan, deputy head of investigations, said the duty officer in charge had been taken off the case and replaced with a new set of hands who had issued a new summons. "If there is no response in seven days we will seek a warrant on a charge of careless driving causing serious injury against the driver," he said.

Slap over the head

A Khon Kaen mother is asking netizen critics to leave her in peace after news reports that her 14-year-old son had crashed a motorcycle she had bought him just eight days before triggered a row over her parenting. 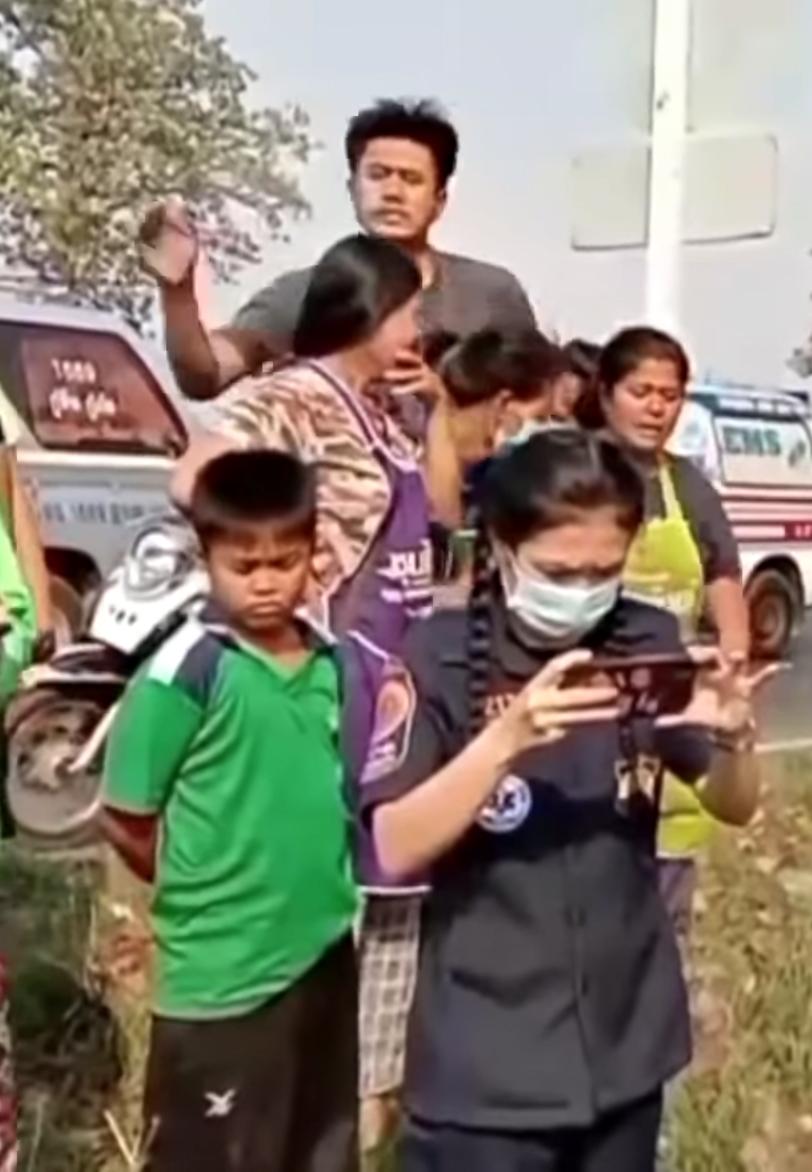 Crying Oranong is slapped by her husband at their son's accident scene.

Oranong, 38, came under fire for buying the youngster the bike, which had yet to be registered. Adding to the drama, her husband had turned up at the accident scene and hit her, so angry was he that she had succumbed to the boy's pleading and bought him the bike.

Witnesses said the boy, Thee, was travelling at speed before the Feb 24 accident, which left him with leg injuries.

Thee was heading into Ban Phai district on Ban Phai-Borabue Road in front of the province's Ramkhamhaeng University when a Honda City car cut in front of him. He hit the rear of the vehicle, which sent him plummeting into a roadside ditch.

Video footage showed Oranong crying by the side of the road as she waited for Thee to be taken to hospital.

Her husband also appears in the clip, and angry she had disregarded his warnings not to buy him the bike, strikes her over the head, sending her sprawling to the ground.

He had asked her numerous times not to buy the bike for Thee, who at that age was inclined to be reckless. Oranong took the slap in her stride, saying she had since made peace with her husband, who was understandably upset to see their son had been hurt.

"There's no mother who would want harm to come to her son, and plenty of other mums have bought bikes for kids the same age," said Oranong, a trader who has a stall 500m away. "Thee needed a bike to do errands."

When she saw the accident she rushed to the scene and was standing there when her husband turned up. Oranong said publicity over the incident had made it hard for her to go out in public.

"I am having to avoid the media, after netizens said I was raising the boy the wrong way. They said I may as well have bought him a coffin.

"In fact, I am hurting no less than he is. All mothers want good things for their kids and he asked for the bike," she said, adding they would have to teach the lad to be more careful. Police inspected the scene but there was no word on whether charges will be laid.

A Chon Buri man who almost went blind after a work accident put on a film show for ghosts at a local cemetery to redeem a vow he made if they were prepared to save his eyesight. 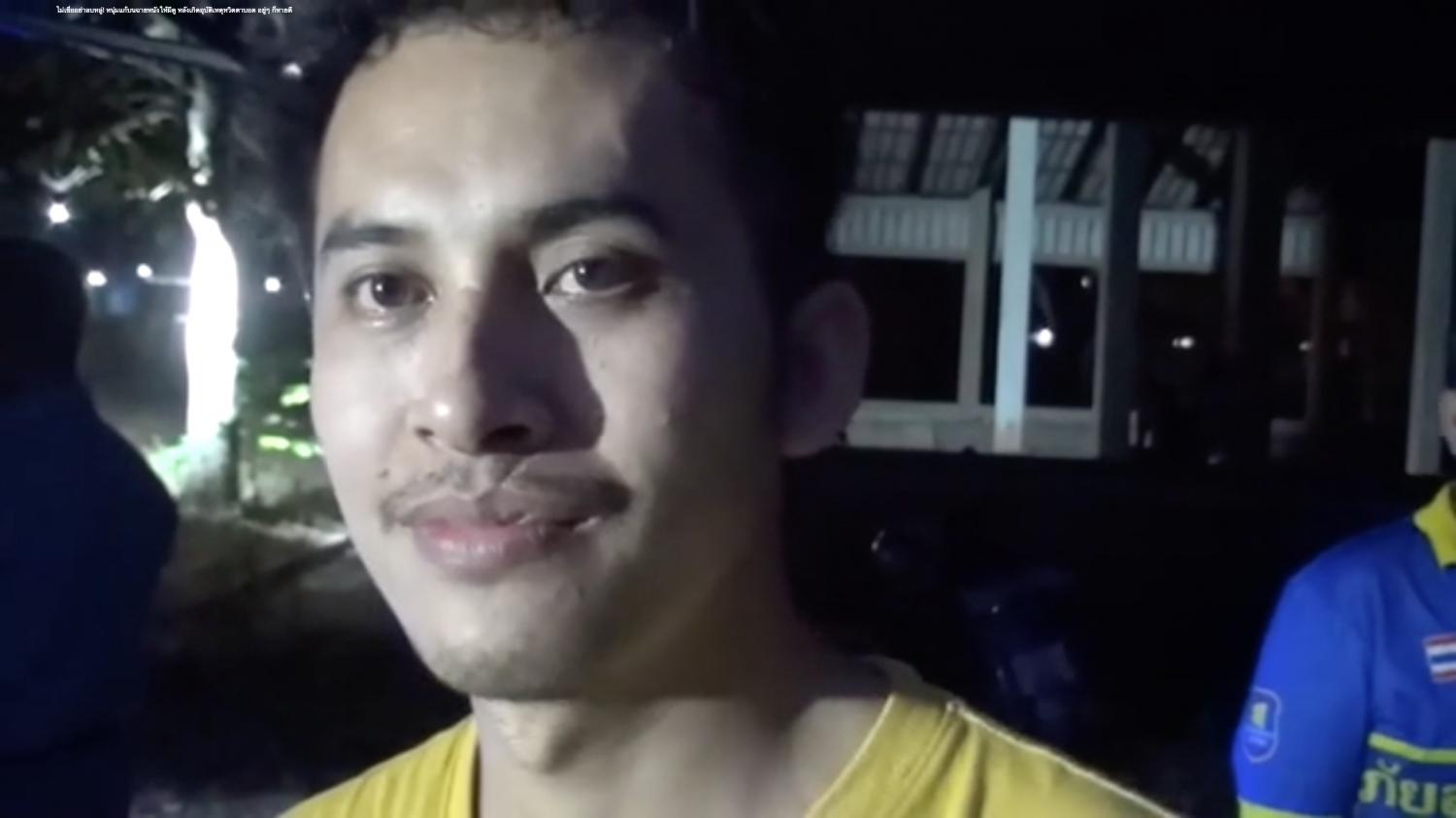 A Chon Buri man who almost went blind after a work accident screens movies for ghosts at a local cemetery to redeem a vow he made if they were prepared to save his eyesight. Photo By TV SCREEN CAPTURE

Somboon Pongthongkham, 34, set up a projector and screened movies on a white screen he set up at a cemetery in Sawang Buddhist Monastery Park in Phan Thong, Chon Buri on March 2. Few locals were in attendance that night, as local spirits were the intended audience.

This was to redeem a vow he made to local spirits following a work accident in August last year. He was working at a factory when a piece of metal flew into his eyes. The doctor said he had almost lost his eyesight and might need surgery to replace his corneal lens; either that, or he could go blind.

"The day I went to see the doctor again I expected they would give me a date for surgery. I asked the spirits if they could help make my eyesight better without the need for an operation.

"Miraculously, when the doctor took a look he said my eyesight was better and I would no longer need surgery after all. So I am now redeeming the vow to the spirits who helped me," he said.

He set up a projector in a desolate, open field, with rescue workers and a handful of locals who had heard about his gesture to lonely ghosts in need of cheering joining him for company. 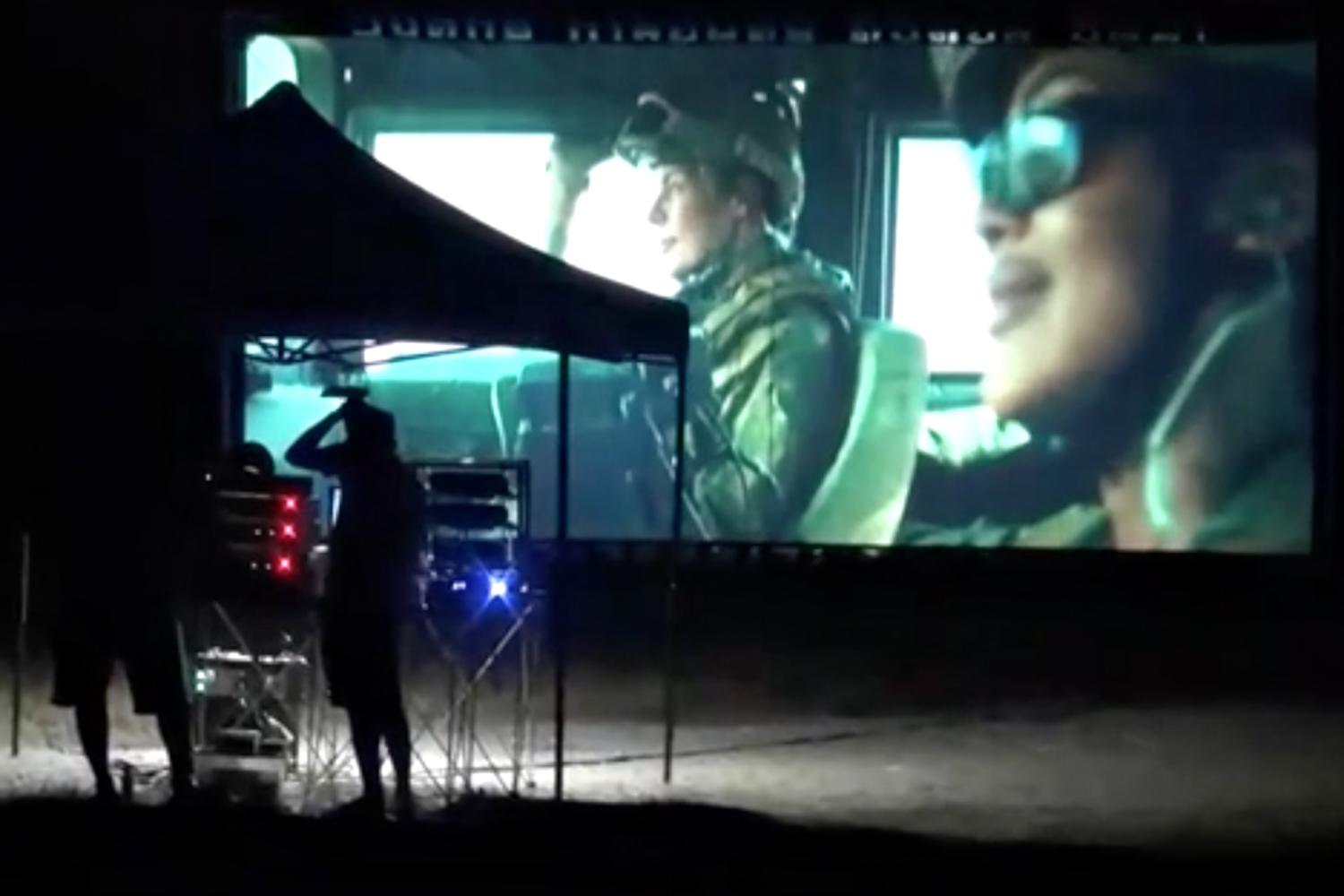 Somboon Pongthongkham, left, who almost went blind after a work accident screens movies for ghosts at a local cemetery.

Movies are often regularly screened for spirits at the cemetery, where more than 100 souls reside. A Thai Rath newspaper crew visited during an open-air screening for local ghosts in April 2018, as the sound of crickets chirping filled the air but spirits were holding their peace.

They spoke to the head of a local chapter of rescue workers, Boonsom Silipachai, who said he screens rented movies at the cemetery every year. Locals, he said, believe their fortunes will improve if they are kind to the ghosts. Screenings are often held during Songkran, he said.

Some of the 100 bodies buried there have relatives who visit, but other ghosts have none, and their spirits needed cheering.

In Phichit province, locals have entertained ghosts in their patch by screening movies for them every year for the past 56 years. Rescue workers screen a mix of Chinese and farang flicks (The Rundown, The Forbidden Kingdom) on an open field near Wat Mun Lek in Muang district, during Chinese New Year.

At this time, some locals believe, heaven and hell open to allow spirits to receive the merit and good deeds which their ancestors have made for them.